Remember back a week or two ago when I noted all the new products that came in to review?  Well, in addition to those, there was one little item that I just ordered myself…a remote controlled shark blimp.

I somehow had stumbled upon this YouTube video of it, and once I saw it, I knew it was love at first sight.  For those that have read for a while, you know I love sharks – especially great whites.  I’ve a long history of getting close when possible.  Probably closer than is good for my own health.  So, when I saw this thing for $32, I saw no way I couldn’t buy it.  Pure impulse buy.  They also make a clownfish (Nemo!), but that just wouldn’t do.  Nope, not at all.

So, here’s what the box looks like when it arrives: 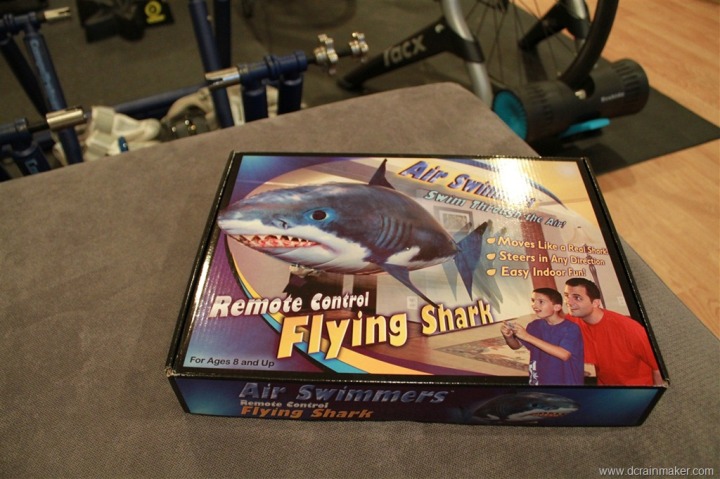 It’s incredibly light.  I’m reasonably sure that college admission packets are heavier than this.  The Girl and I sat down and got it all put together.  It’s not difficult, albeit a bit tedious at times due to the sheer number of sticky thingies and ensuring you don’t end up stickying yourself or your partner to the shark.  That’d be awkward for all involved. 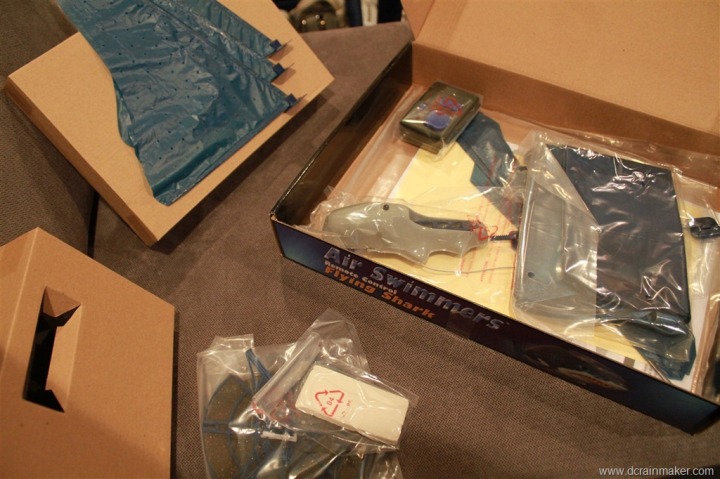 Now, when it comes to filling this beast up, you have a few options.  First, you could take it to your local grocery store or flower shop and have them fill it up there for a fee.  The challenge with that is that while it’s easy to walk in with this thing, you’re going to create a massive scene walking back out with it.  As you’ll see in a second – this shark is basically the length/width/height of my time trial bike.  Except it floats.

So instead, I found on Amazon a little mini helium tank for about the same price.  This would allow me unlimited refills of Mr. Shark.  It also (apparently) allows The Girl to to fill up small balloons and then…uhh…inhale the helium – going around and speaking in a super high pitched squirrel voice. 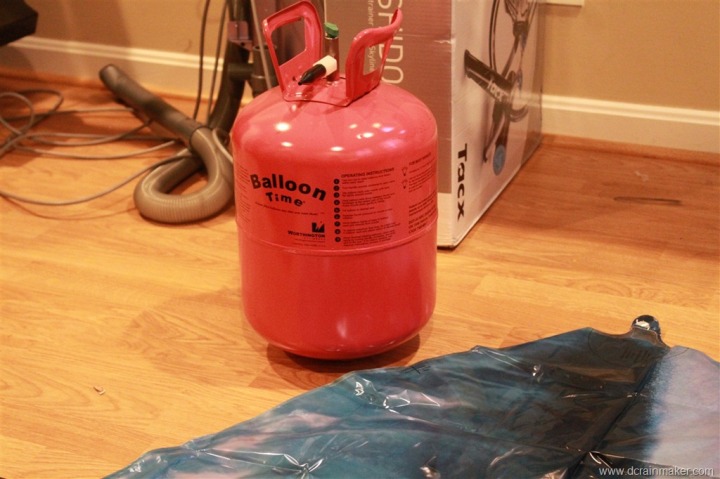 And now…time to fill Mr. Shark.  In order to fill him up you have to stick the helium spout…ummm…in his rear.  Look, I can’t make this stuff up. 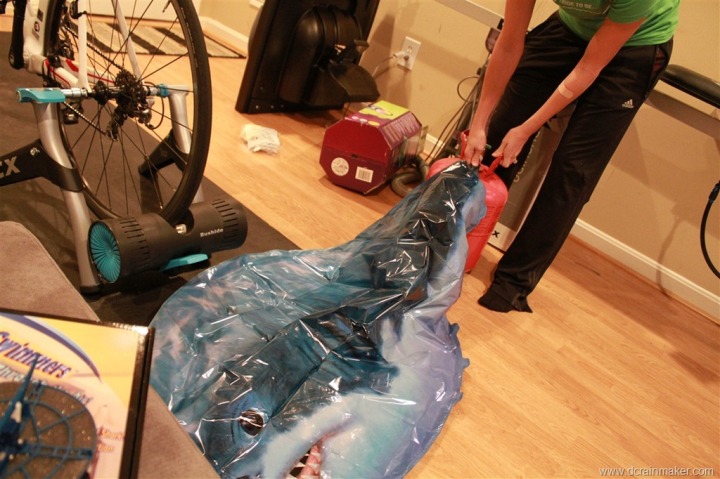 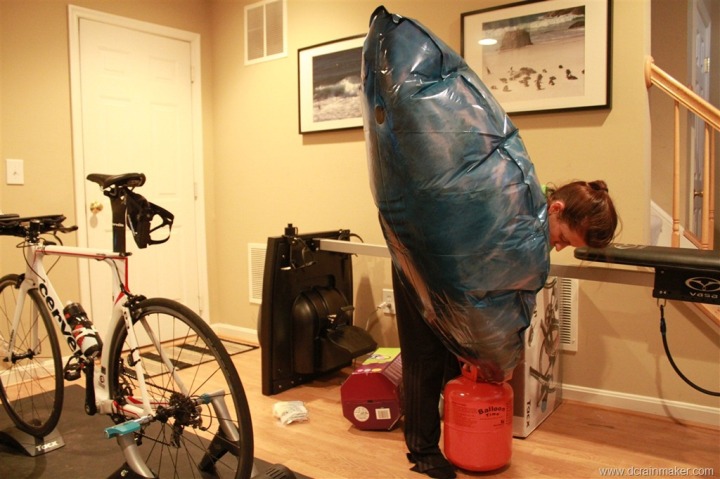 It’ll take a wee bit of time to get him all filled up.  As you do so, it’ll become incredibly clear how darn big he is.  Massive. 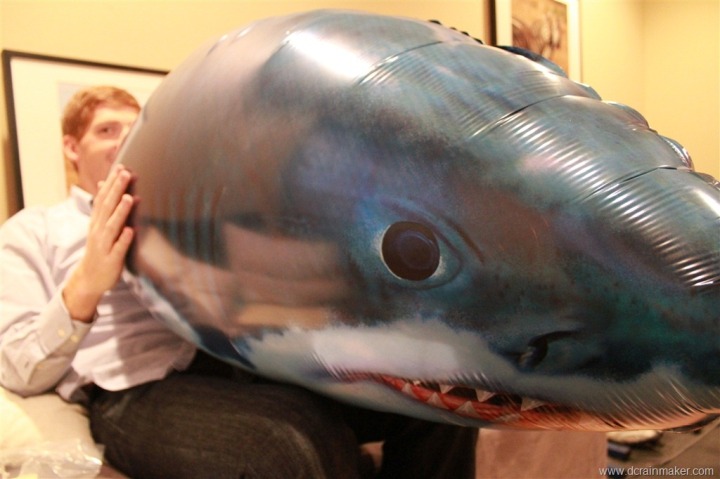 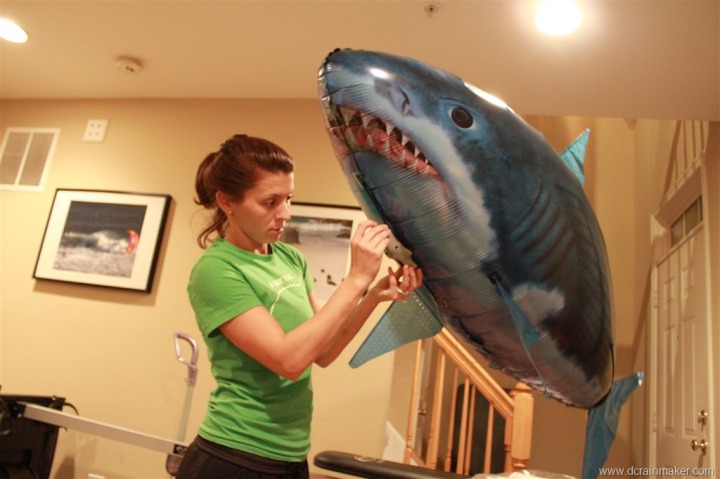 Soon, we had our shark floating: 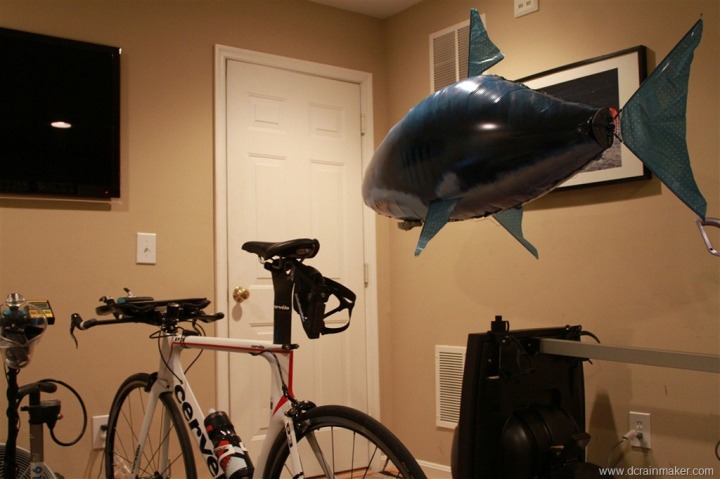 The Shark moves using a tail that pushes it through the air.  There is no propeller.  You can control up or down via changing the position of the ballast below the shark – which runs on a small motorized track.  All of this is controlled via a mini remote control: 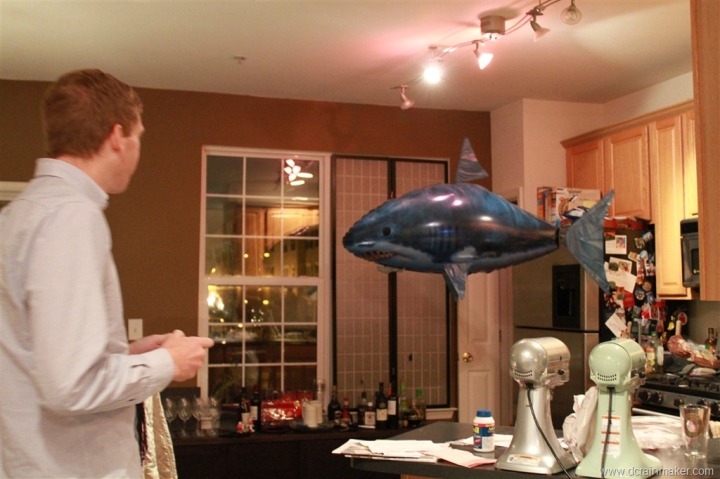 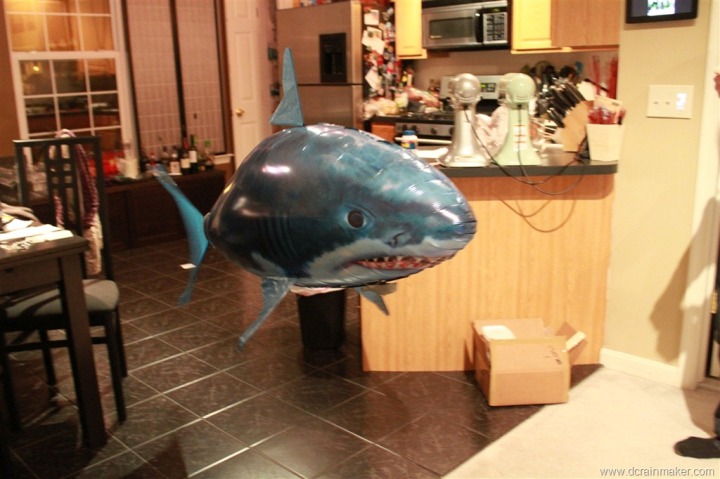 And finally….time to go for a swim…err…flight.  Since only a YouTube video would do, I offer you the following: 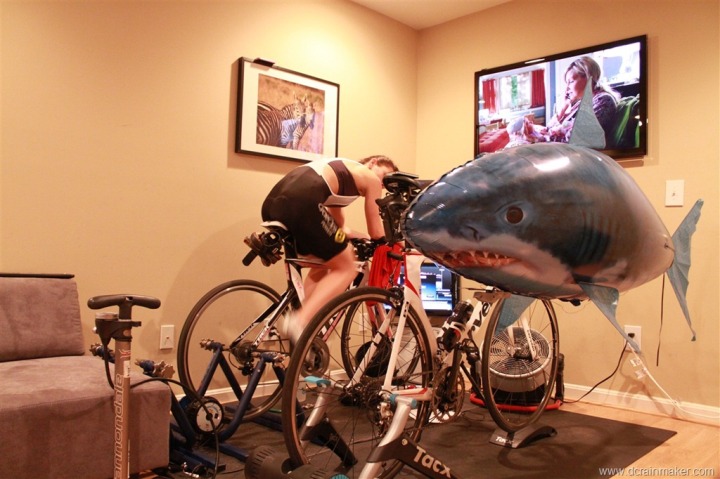 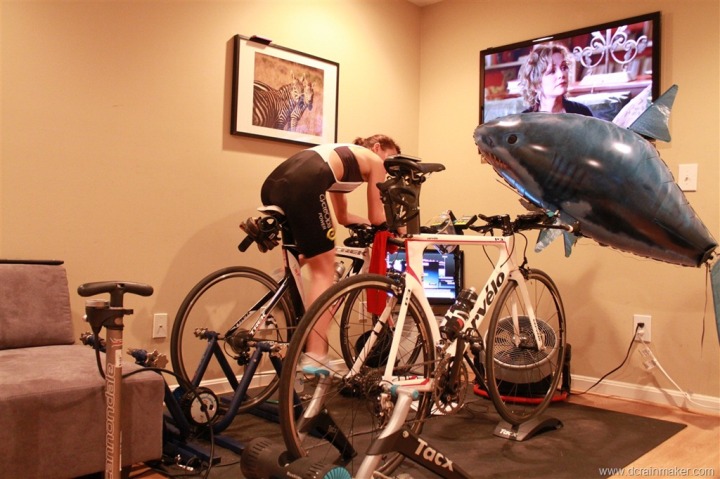 Mr. Shark does have a mind of its own.  I left him the other day in the room with the bikes, and then the next day couldn’t find him.  He had floated his way up four flights of stairs to the guest room (we live in a townhouse).  I’m pretty impressed he was able to navigate his way there all by himself.  I’m just waiting for a guest to stay and have him show up some night floating above them.

At any rate, if you’ve got an office, or kids, or are in anyway a kid at heart – this is one of the funest things to play with.  Note that you can’t take it outside, just doesn’t have enough shark power to overcome the great outdoors.  He’s more like a house cat.

And really, at $32? Can’t go wrong there.  And more importantly, as you have seen, it provides never ending ways to try and sneak up and scare your significant other.