Guest Post: Sleeping My Way to the Top Part II: The Race Report

Note from Ray: Here’s the second part of ITU Pro Triathlete and friend Lindsey Jerdonek’s experience with using an altitude tent ahead of her first ITU World Cup race.  If you’re not familiar with how ITU racing differs from age group racing, check out this past post. Enjoy!

Recently, I shared my experience of sleeping in an altitude tent which helped me acclimatize for my first ITU World Cup race in Guatape, Colombia. The race took place at 6200 feet and because I live at sea-level in Washington, DC, I needed to prepare.

Sleeping in the tent worked great. Despite having no quantitative data of blood tests or other forms of measurement to prove it helped (my apologies to the data-hungry readers whose hearts are sinking), my preparation filled me with confidence that the altitude would not hinder my performance more than any other athlete. If I had to sleep in a tent in my bedroom for the placebo effect to kick in, so be it.

The race took place on Sunday, November 6. I flew into Medellin the Thursday before and braved the dark, winding, hilly, and partially unpaved roads, on a 90 minute shuttle ride to the race hotel, with a handful of other ITU athletes.

We were a few kilometers from the city of Guatape where the race took place. The hotel served 3 meals/day—a stark contrast to the continuous stream of food I’m used to eating—and came equipped with a pool. Here’s the view from the hotel: 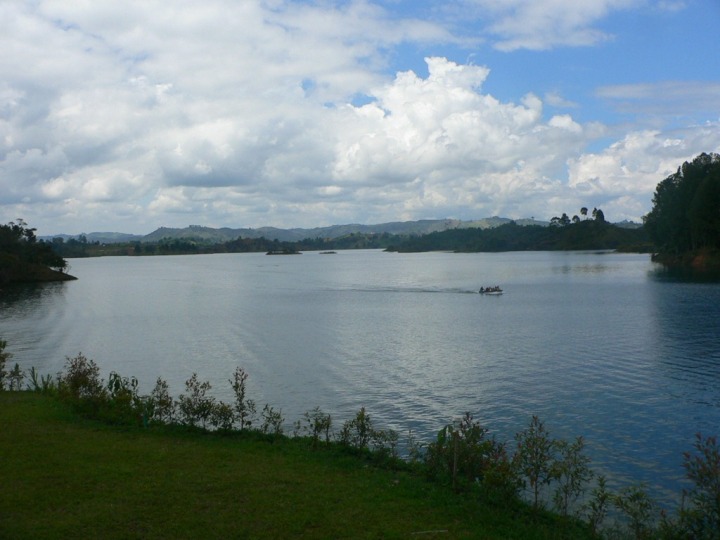 And my quaint room: 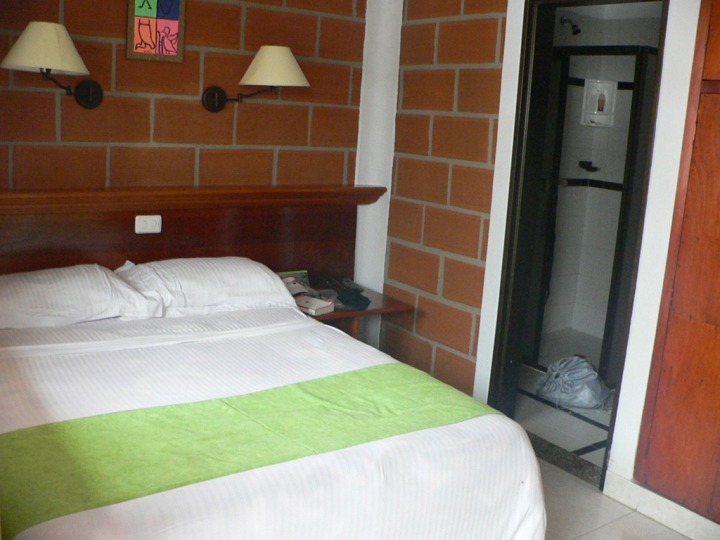 It was nice to have my own space, though the bathroom flooded with each shower and I nearly punched through the shower wall when I propped my foot in the corner to shave. For $110/night they’re obviously making a killing.

A delicacy at lunch: 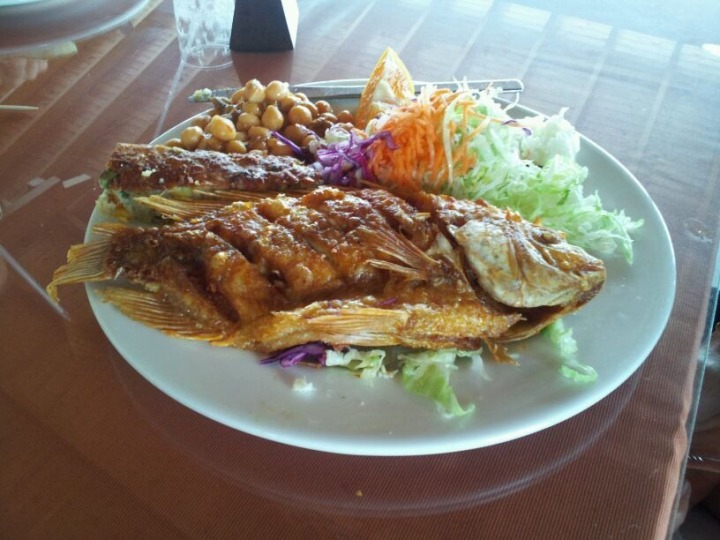 On Friday I familiarized myself with the swim course and rode one 10k loop of the bike with Matt Chrabot. He was a touch faster on the descents than I… the course was hilly and technical and bordered on VERY INTIMIDATING. I suppressed the ‘fraidy-pants within.

It was a luxury to have a personal bike mechanic on-site (Kevin Collington) to diagnose the unnerving creak coming from my rear wheel. Or the bottom bracket. We couldn’t figure it out but Kevin convinced me I was good for 40k.

The night before the race, the skies opened to torrential rains. I went to bed certain that the heavy rains would pass, but I was very wrong.

When I got up for breakfast at 4am to prepare for the 7am start, the rain had still not abated. Munching on eggs and carbohydrate-rich goodies, I savored the only 10 minutes of unimpeded internet access I had all weekend. By the time I was ready to bike into town, it started dumping rain and I opted for the bus. I was amused to see a flash flood spill in from the ceiling two rows behind me on each turn of the bus. Dressed in the rain jacket I had fashioned out of the garbage bag donated to me by the kitchen staff, I thought that this was an adventurous race.

The athlete’s lounge, transition and the finish were clustered in the middle of the city square. Upon arrival, it was announced that our race would be wetsuit legal. For the first time ever, I was ebullient with this news. I gleefully suited up and basked in the warmth of my wetsuit as I set up transition and headed over to the swim start.

At the water’s edge, we learned that a mudslide on the bike course caused an hour-long delay to the start of our race (how Rainmaker-esque). After a long swim warm-up, I headed back to the athlete’s lounge for another announcement: The race would be changed from an Olympic to a sprint distance due to the bike course conditions—or lack of bike course. To ensure a safe race, the ITU adjusted the course to: 750m swim, 4 x 5k bike loops (without the super scary section), and then 2 x 2.5k run loops. I did not have a strong opinion about this change. If anything, I was happy I only had to swim 750m. Swimmers are inherently lazy…

THE RACE. We were announced by rank (I was #41) and ran down to the dock to select a spot on the pontoon. The first turn buoy looked like it lined up with the right side of the pontoon, so athletes lined up right to left to shorten the distance they would have to swim ~300m out.

There were 50 women starting in the field, and I had mentally prepared to swim with LOTS of friends with similar swim abilities. It’s crowded. It’s physical. It’s a lot to take in when you’re used to fields half that size.

I exited the water in the middle of the pack. To get an idea of how tightly bunched we are, this is a photo of the men’s swim exit: 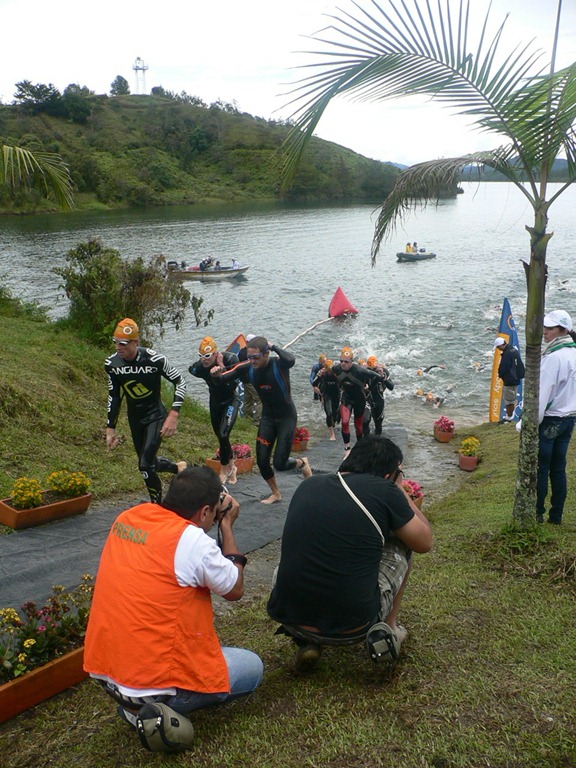 As I ran into transition, my cap flew off behind me when I removed it. Knowing that I would receive a 15-second penalty later in the race if I left it behind, I turned around to retrieve it and was promptly mauled by oncoming traffic. Later, I fumbled getting my cap into the box, resulting in a slow transition.

On the bike, the girls immediately in front of me were not closing the gap to the second pack, so I was working alone and passing women to bridge up. I was really hurting by the time I reached the hill and didn’t have additional gears to close the gap (maybe 10 seconds) by the turn-around at the top of the hill. After the turn-around and descent, I had lost more time on the pack in front of me. When riding through the town square cobblestones, I picked up a French athlete and we rode together for the second loop. The third pack swallowed us up on the 3rd of 4 loops and we finished the ride together.

The remaining 5k run was not enough distance for me to run down athletes in the bike packs in front. I finished the race 25th and had the 15th fastest run split, which is a pretty good start. As an aside, I definitely felt the altitude on the run and was breathing very deep!

Looking at the results, I saw I swam with women who made the second pack. It shows how critical clean and fast transitions are at the World Cup level. I know I can sharpen these skills with more experience.

I did not anticipate placing (as low as) 25th but that is the race turned out. It’s hard to be disappointed, though, since I had a breakthrough year of racing. I found the entire weekend rewarding to visit Colombia for the first time, befriend the American men and meet ITU athletes from around the world. Andy Potts spent a lot of time talking with me about how he has created his career in the sport and it was a unique opportunity to be there and learn from him. 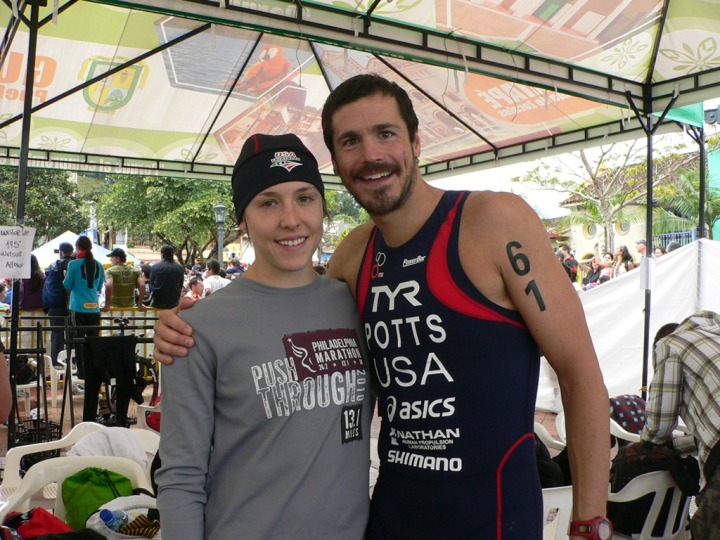 As I milled around the finish area after the race, I met a retired Colombian woman who was watching the races. I told her of my plans to pick up coffee beans before I left, and she insisted that she buy me some as a gift. She headed to the to grocery store and returned with two bags. Isn’t that cool?!?

After my race, I watched the action unfold in the men’s race: 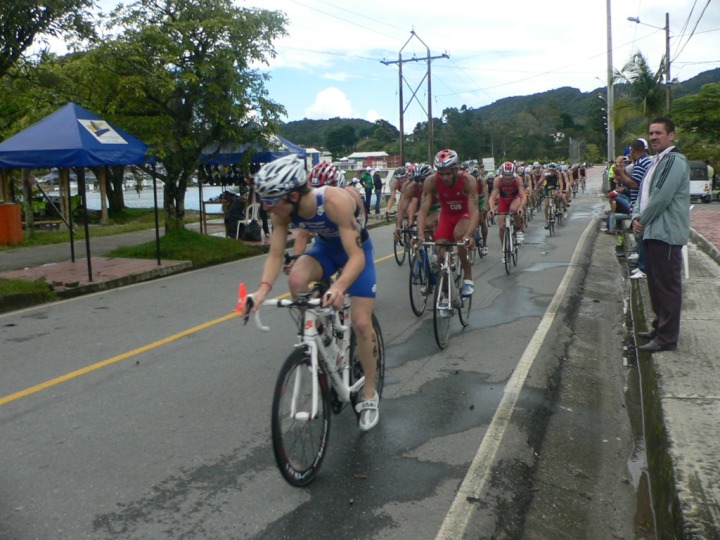 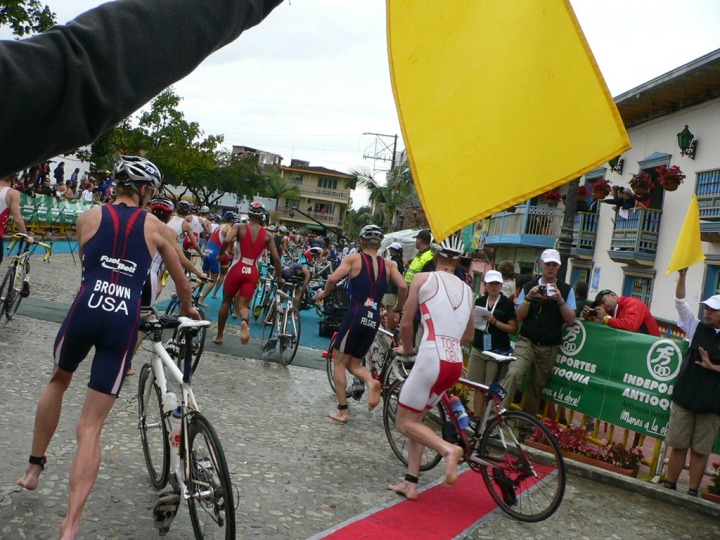 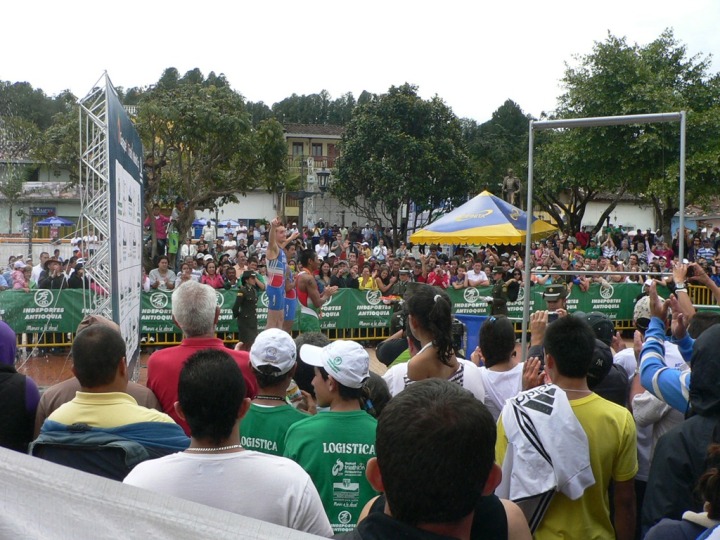 I walked around town, too: 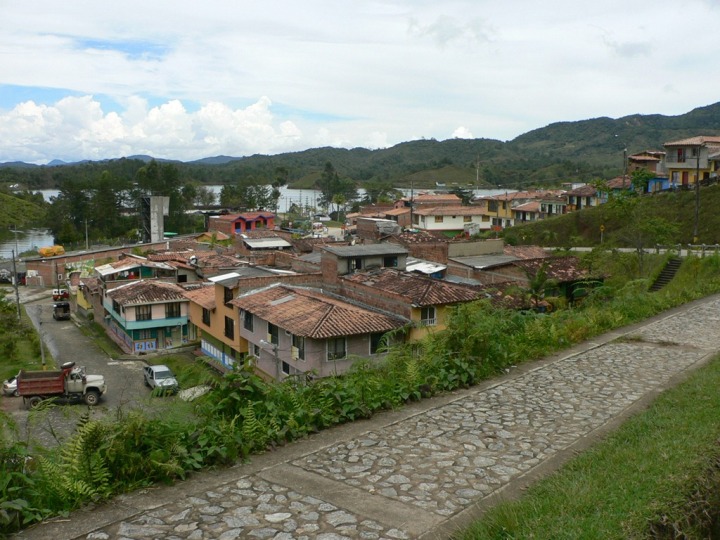 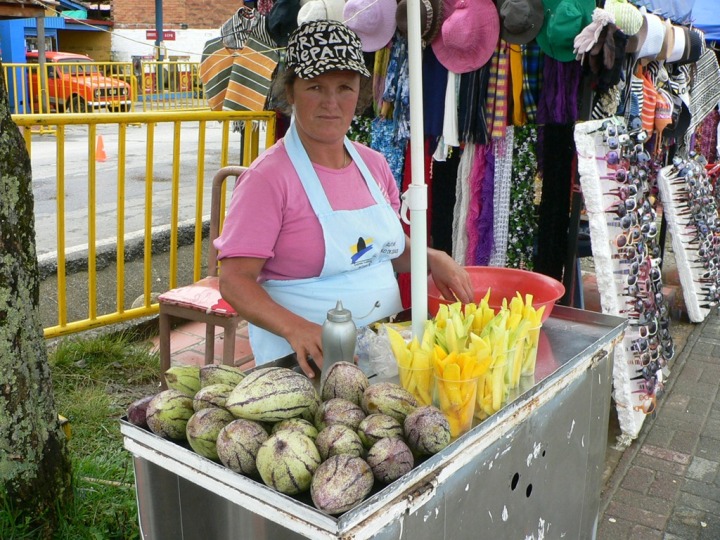 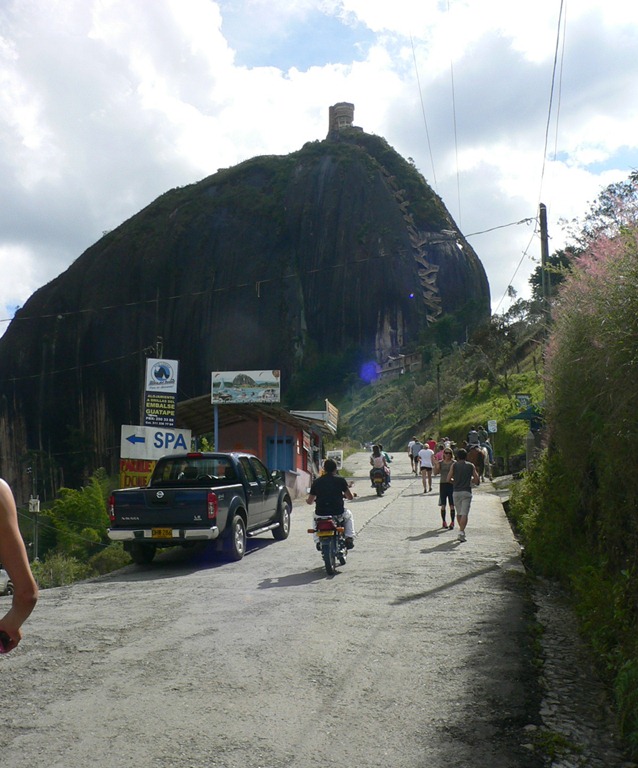 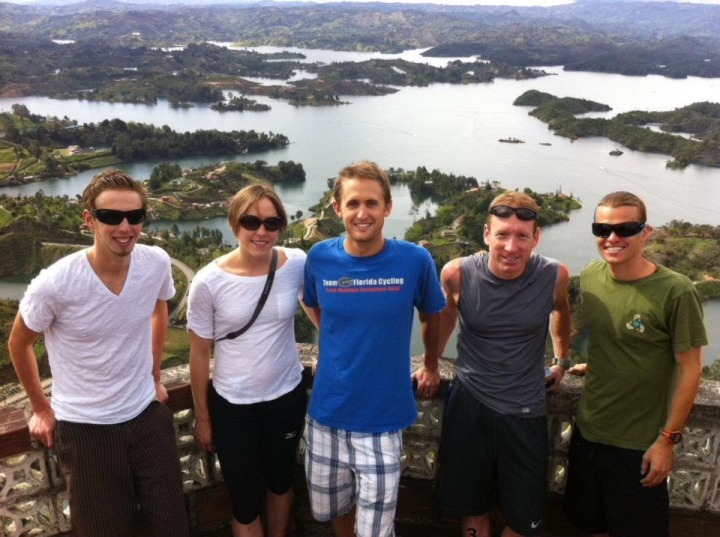 Thanks for reading and let’s throw our support to Ray this weekend in Philly!!!