Experimenting with using the Garmin GTU 10 tracker during Ironman Boise 70.3

This past weekend I did a bit of an experiment with the Garmin GTU 10 (GTU = Garmin Tracking Unit), and Ironman Boise 70.3.  Many of you followed along on a separate Twitter account as both The Girl and I raced with the tiny tracker hanging out in our back pockets, tracking our every move.  This is the same tracking unit and supporting technology that was used in the Boston Marathon, as a guest writer wrote about back in April.

So after the race I wanted to loop back around and see what worked and what didn’t work with the setup.  But first, let me show you what the unit looks like, just so we’re all on the same page.  Here it is here, in a picture I took in transition pre-race. 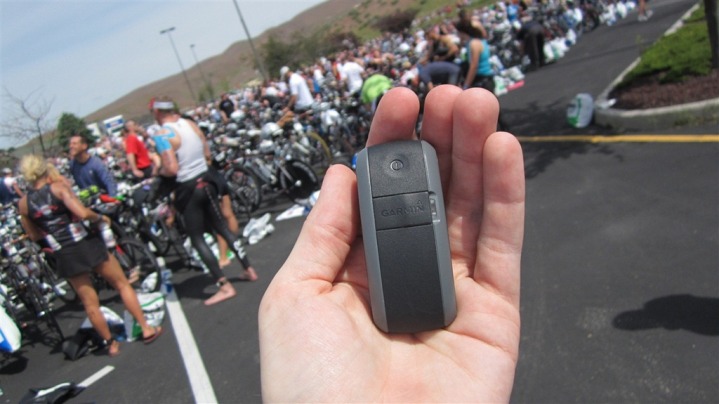 The GTU 10 is a display-less device that only has one button – used to turn it on/off.  The unit is a combination of both GPS and cellular technology to provide continuous updates on the location of the unit, and allow folks to query the status at any time for an immediate update.  The unit can be adjusted to change the update frequency, such that the battery life can accommodate the mission at hand: 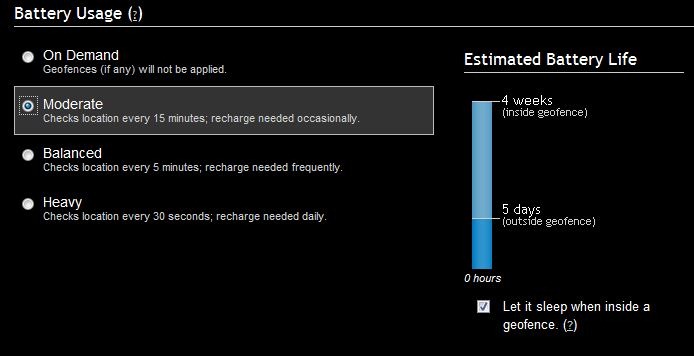 In my case, I wanted the most frequent updates, so I set it for 30-second updates – after all, if for some reason it took me longer than 20 hours to finish my half-iron…tracking would probably be the least of my concerns:

The next item was to set up the alerts.  See, unlike your Garmin Forerunner or Edge GPS unit the GTU doesn’t actually create a useful track of where you’ve been (technically it can store some data points, but the data is mostly useless since it can’t understand how you got between those points).  Instead, it’s more of a ‘in the now’ type of device – and simply tells someone where it is at that exact moment.

As such, in order for me to use it to trigger alerts based on my location I had to set up what are known as ‘geofences’.  Geofences are simply little areas of land that you define when you want to be alerted when the unit wanders into, or out of.  You simply set them up on a map by connecting the dots.  It’s just like Paint, except on a Bing Maps instead. 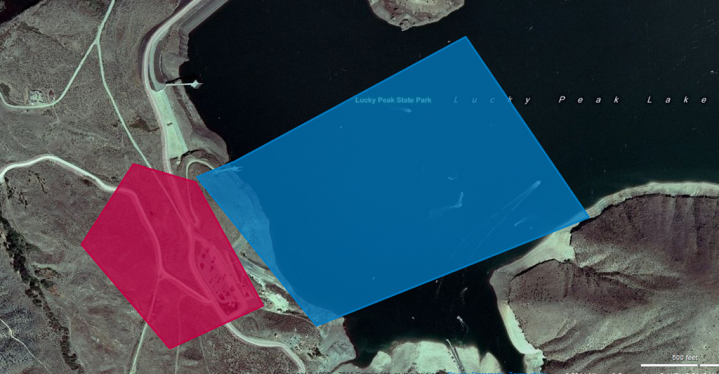 Because I wanted it to alert every 5-10 miles, I drew up a bunch of fences at various points on the course.  Thus, each time I crossed a given fence at a prominent mile marker you’d get an alert.  The Boise 70.3 bike course is mostly an out and back route, which was both good and bad from a geofence standpoint.  It was good because I had to draw half as many geofences, but it was bad in that I couldn’t differentiate whether or not I was crossing mile 15 going outbound…or mile 35 coming back.  Thus, in the alerts, you saw this, which was probably a bit confusing:

Adding to the complexity is the fact that I could only activate 10 geofences per tracking unit.  So this meant I had to ‘conserve’ how many fences I could create.

Here’s what it looked like if I zoomed out a bit to cover the entire course.  The swim is to the lower right, the bike in the center, and the run downtown near the orange dot (me!).  I could have colored the different geofences different colors, but I did it quickly and forgot. 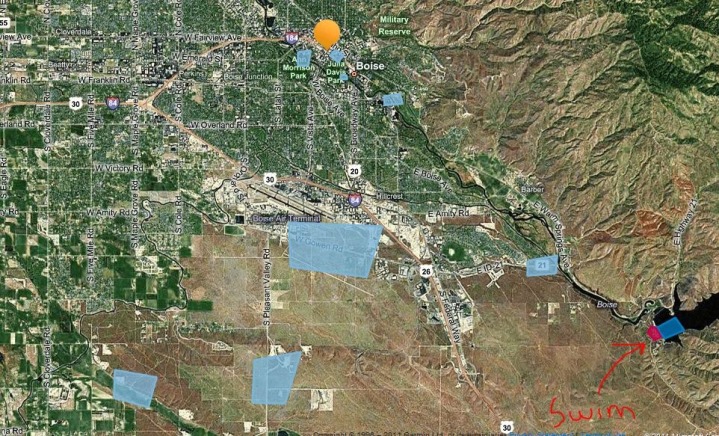 So with that, let’s go with a quick play-by-play of the race.  You initially saw me turn on the units while in the transition area at about 1:10PM (Eastern, 11:10AM local).  Because we were within the TransitionArea-SwimToBike geofence that I had set up, it alerted on my ‘entering’ that fence.  I could have set up exit alerts as well – but I only did that for transition, and not for the general mile markers.

Once powered on The Girl and I simply placed the small units in the back pockets of our tri tops.  About the size of a pack of gum, they were easily out of the way.  Additionally, since they’re IPX7 waterproofed, there was no concern with them hanging out in the water for the 30-ish minute swim.  Now technically IPX7 is 30m at 1m deep, so I would have been just barely over the limit, thus I was hopeful it would work out – but for an Ironman, a simple Ziploc baggie would work to extend the time.

With that, into the water we went.  While I was in the water, I don’t believe the tracking worked – though, with the giant geofence I had set up over just about the entire lake area – it was highly unlikely it was going to trigger an alert unless I swam far off course.

For those following, the first real alert most of you got was when we exited the transition area and then a bit later hit Mile Marker 5.  You probably first saw The Girl’s alert, and then my alert following shortly thereafter– as she started about 13 minutes ahead of me:

It should be noted that the GTU 10 doesn’t actually alert to Twitter directly.  It can only send alerts to e-mail or via text message.  Instead, I borrowed a trick from the Boston Marathon post and used Twittermail.com to in turn relay messages from the Garmin site to Twitter.

Now, what’s unfortunate here is that the Garmin GTU site doesn’t allow me to publically share mapping location on the site.  Other services such as Spot and similar allow you to create shard pages – kinda like one-time credit card numbers, that you can share out temporarily (or permanently).  The only way for someone to see mapping information today is if I give them my username and password (in the IT world we call that ‘less than ideal).

That said, with the help of the username and password our family and coach were actually able to follow along on a map as well – seeing exactly where we were.  In fact, our coach was watching as I slowly caught up to The Girl and when we passed each other (we were actually climbing up the longest climb of the day at the time): 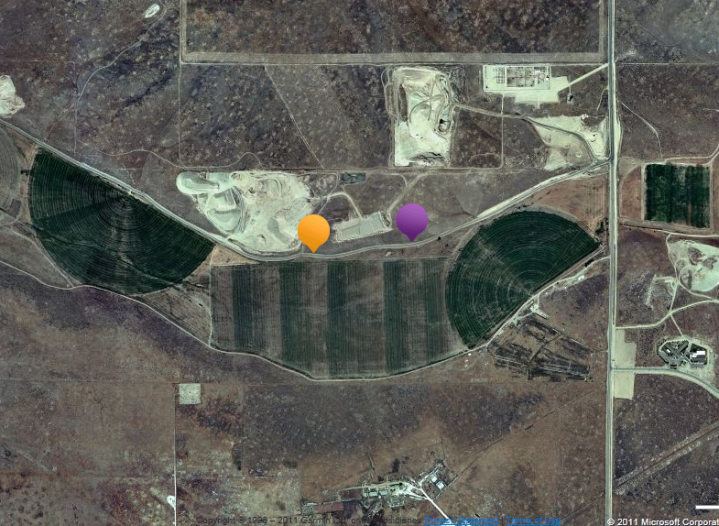 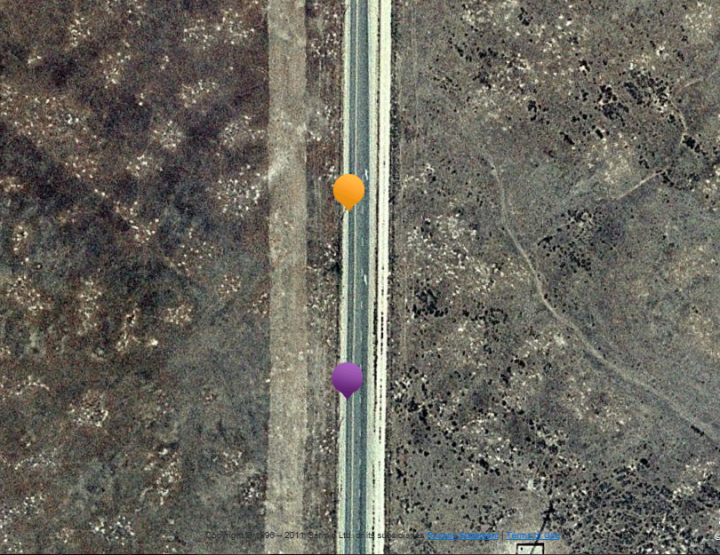 For the rest of the bike, based on what I saw in the Twitter feed afterwards, the tracking seemed to actually work pretty well.  It clearly showed me hitting the various geofences, and then The Girl hitting them a few minutes later – in the case of the below, Mile 35 (remember, the fence had to be split on the out and back course):

Once onto the run though, things got a bit messier.  See, in theory the course was supposed to be almost a perfect loop – one that you’d do twice.  We were to stay on opposite sides of the river for each loop – allowing me to easily define the geofences accordingly (the course map, and then my geofences): 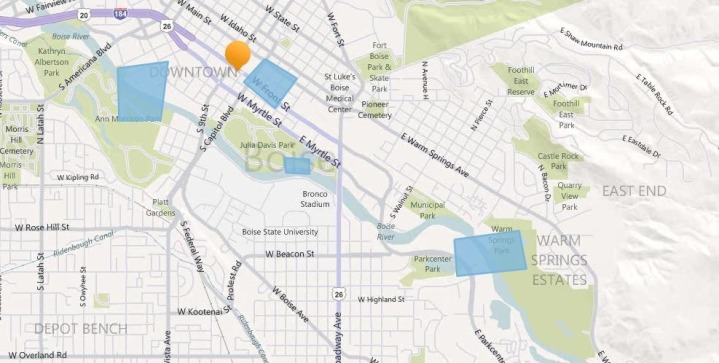 The problem was…the race decided to deviate from the published course maps – instead, utilizing the following route: 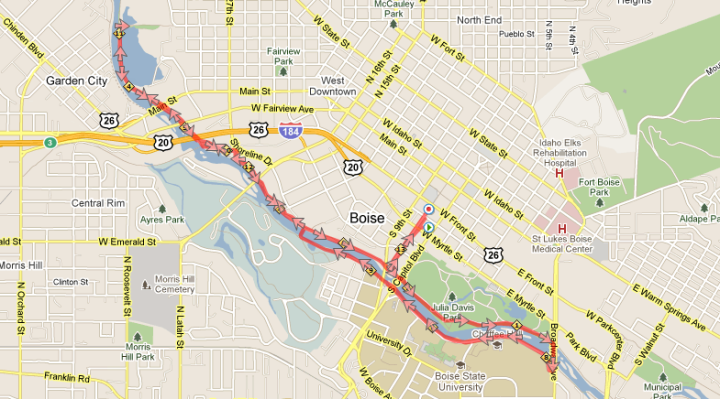 As you can see, this means that when I was supposed to be on one side of the river (southern side coming back), I was actually on the northern side – thus tripping all the carefully laid geofences, creating what was likely plenty of confusion for you.  For example, in the below timeline you can see that it’s pretty unlikely that she ran 6.5 miles in 23 minutes.   Unfortunately, due to the course change, she doubled back through the 5.5 mile marker zone – thus triggering the alerts. 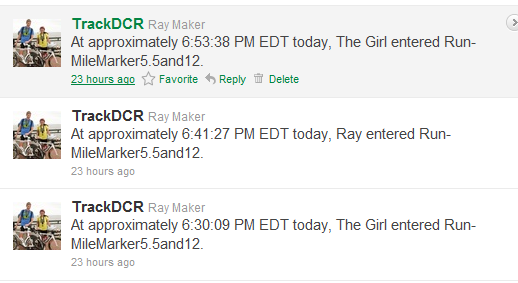 Now, I can’t fully blame the GTU 10 for this – that lies within the realm of the race organizers.  However, should the GTU 10 had the capability to both show actual GPS track as well as current location publically, this would have been more clear and understandable.

That said, on the whole, the GTU 10 did provide a pretty useful way of tracking us.  And for my family that had access to the web page (or the dedicated iPhone/iPad app), they could pinpoint exactly where we were, any minute that they wanted to.  And had this been a full Ironman distance race – the mapping and location data would have been incredibly useful for family and friends, especially given the comical availability of data/splits from sites like Ironman.com

There are however a few suggestions I have that would take this from an interesting experiment to an amazingly useful tracking device:

1) Create/Allow the user of a shared web page so that in the future I can just give out a web page to see where I am.

2) Allow me to overlay a GPX/KML file of the course onto that page – this way folks could see where I was going.  The above screenshots from the maps are nice – but my family and friends had to cross reference that with MapMyRide.com/MapMyRun.com routes showing where we were going.

3) Track my track history. Since the device is using cell phone technology, the data rate costs are considerably cheaper than satellite based upload services – and the data files associated with it are small.  The unit could simply record the track internally and then occasionally upload the full details, even if the recorded route uploaded every few minutes it would still be small data-wise.  That combined with #2 above would make a world of difference to more than just sports folks such as hikers and the like, allowing friends and family to see if they’re on track.

4) Upload ANT+ data.  Sticking a $2 ANT+ CC2571 8-channel receiver chip inside and uploading the associated data would turn this device from a general purpose one into probably the coolest sport tracking option out there.  Sure there are cell phone apps that can do this with dongles (or the Sony Ericsson ANT+ Android phones) – but none of which can last a half-iron race (or an Ironman) and none are waterproof.

Beyond those four items, everything else worked rather well.  The alerting system is lightning quick, and the accuracy impressive – as was also noted in the Boston Marathon post.  Plus, when you tweak the names a bit on the tracking devices (as I did), the alerts it generates can be pretty funny…and oddly accurate.  Thus, I leave you with two of my favorites:

So for those following along – how did it work?  And any suggestions for either myself or the folks behind the GTU 10?