This evening we hopscotched our way across the country, headings towards Idaho – home of French fries everywhere.

But before we arrived at the airport there was first the cleaning of the bikes.  After all, I couldn’t show up at the race with a dirty bike.  Thankfully, my bike itself was pretty clean already, so it didn’t take a ton of work: 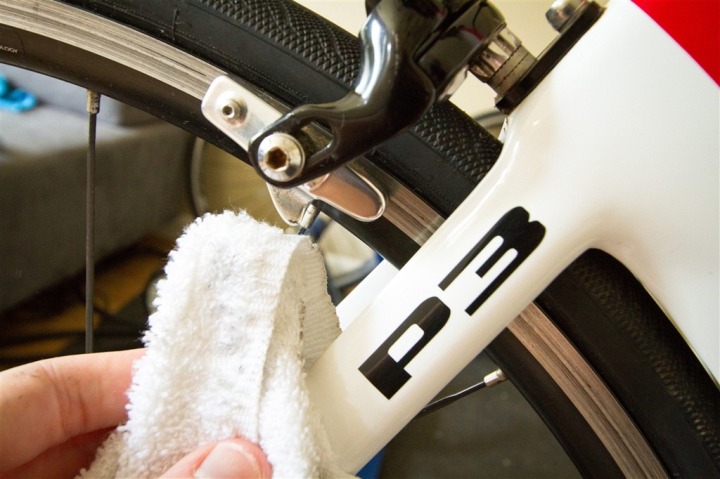 The race wheels though, not as much.  I had forgotten that at the last race a few weeks back transition area was on the grass – so somewhere along the way they got a bit muddy.  No worries, I got them all happy again. 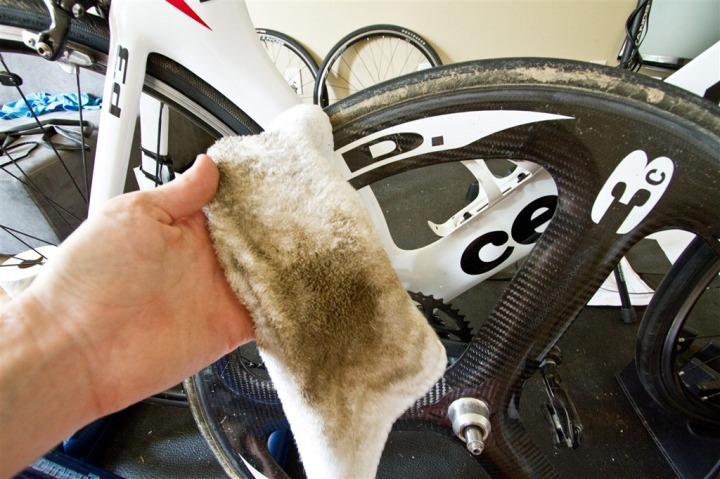 After the cleaning the great dismantling began.  With the wheels off it’s actually really a fairly quick effort to remove the seat and put down the aerobars.  The more tactical efforts comes with figuring out where/how exactly to place all the pieces of foam piping I have (here’s more on my bike travelling setup).  I never bothered to label each foam piece – so I just sorta eyeball it until it’s mostly all covered. 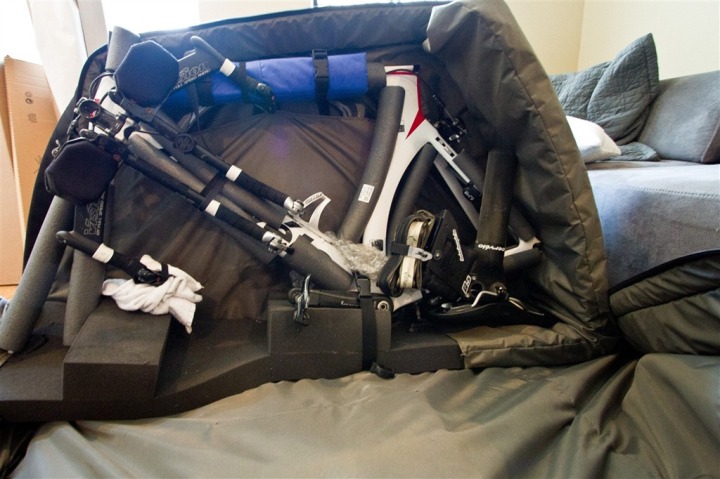 With that complete, the bikes hung out at the door, ready for their big trip: 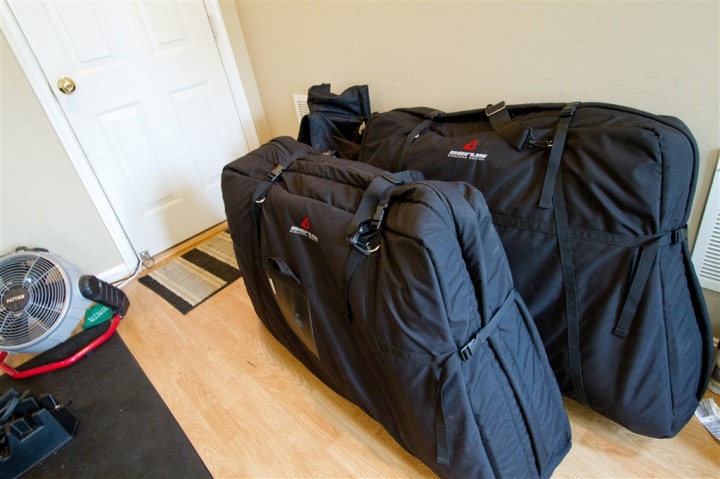 A short (and very hot) car ride later, they found themselves hanging out on the sidewalk in front of Dulles International Airport.  I had dropped off the Girl with the luggage while I went to park the car (since it’s about 2/3rds of a mile walk back). 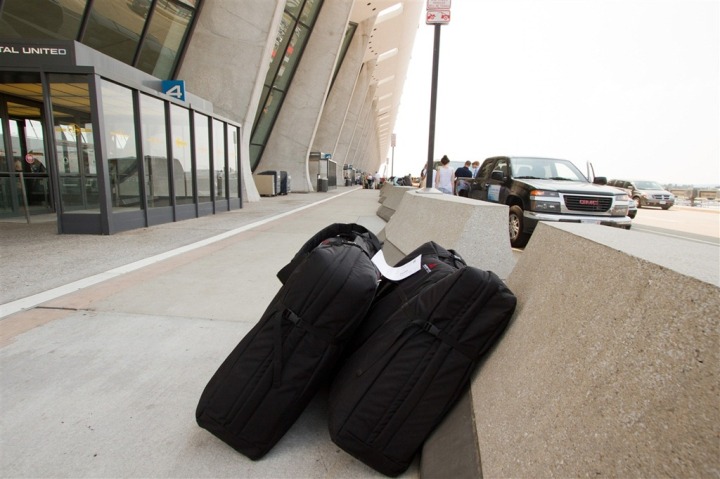 We had a bit of trouble with the bag drop-off, because United decided to change around how their ticket counter desks process different categories of passengers earlier that morning – and the employees were catching up with the new changes.  So three ticket counters later we had successfully dropped of our bikes (without bike fee I might add) and were on the way to the gate.

Our aircraft of choice today was a Boeing 757, always a fan favorite due to the higher thrust takeoffs…though with Dulles’s long runways, there isn’t quite the need there, compared to places like Santa Anna in California. 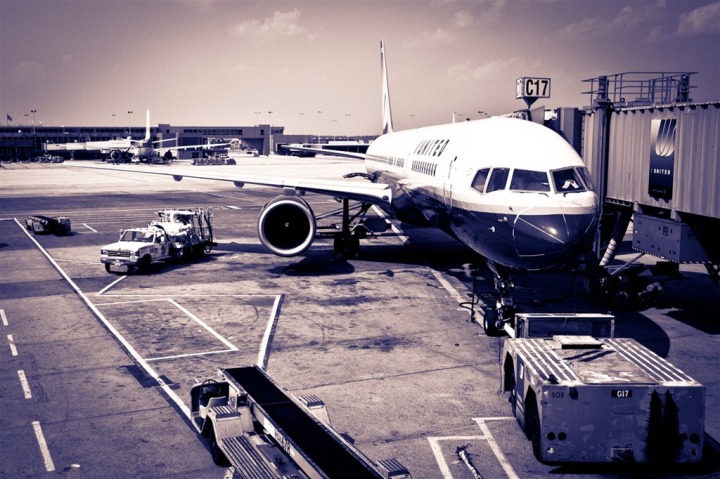 We bumbled our way across the US, eventually checking out Denver – one of the most recognizable airports out there due to the teepee’s that make up the main concourse (off in the distance to the left). 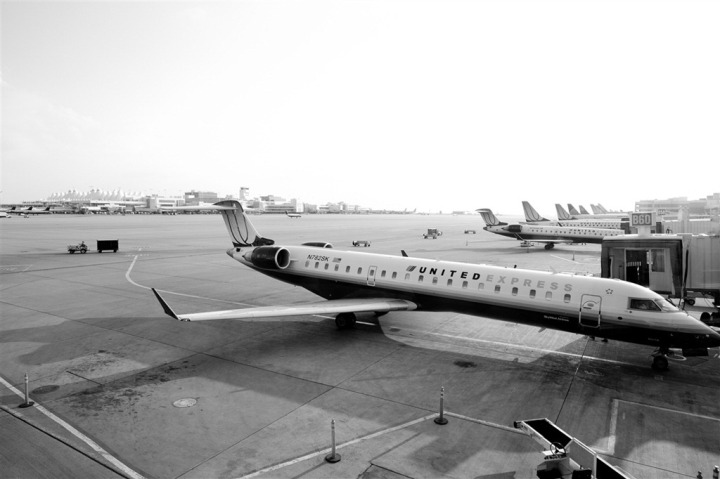 The only snag in our plan was that our onwards flight to Boise didn’t quite happen.  The flight was delayed some 6 hours before being outright cancelled.  Luckily a United agent was able to work magic (over an hours worth of magic) and get some space opened up on a sold out 11AM flight to Boise.  Otherwise, there was nothing before the race aside from a lot of wonky routing of flights down through California.  Sad panda time.

Later this evening we were able to get them to retrieve our bikes though, so we have those in our possession and will re-check them in the morning.  That’s a huge relief.  Our other bags actually decided to take their own field trip – never even making our original IAD-DEN flight and instead choosing a scenic tour through Chicago.  Thankfully for them, they’ve already arrived in Boise.

Tomorrow (Friday) we’ll hopefully do packet pickup mid-afternoon and then eventually drop our bikes off at T1, a ways outside the city.  It’s actually a point to point course, so T1 and T2 are in entirely different locales – just like Providence 70.3 was when I did it for two years.

Now Boise 70.3 is a bit unlike virtually every other Half-Iron race out there in that it starts at 12:00PM – yup, midday.  In fact, my wave – the last one – doesn’t even start until 12:45PM.  Which to be honest is awesome.  I love being the last wave as it gives me an opportunity to focus on trying to catch & pass people.  It’s just a big mental game for me, and I do well in that situation.

Finally, I’ll be experimenting a bit with the Garmin GTU Tracker on Saturday during the race.  I won’t be messing with it during the race – but rather will just have it in my back tri pocket from swim to bike to run, letting it do its thing.  Because the Garmin GTU website is somewhat poor in that you can’t simply publically share the web page of your tracker device (like you can with the Spot Trackers and just about every other tracker service), you’ll have to deal with updates posted to Twitter instead.  It’ll simply automatically post whenever I cross a number of different boundaries along the way.  It may not be perfect, so keep that in mind as well.  But, this was the same methodology used by the popular Guest Post on tracking his wife in the Boston Marathon.

Anyway, because I don’t want to flood my regular Twitter account I’ve setup a separate one: TrackDCR – which you can just hit up the page to see where I’m at.  Oh, and The Girl will have her GTU updates posted to the same place as well.

Enjoy, and hope everyone has a great weekend!