(Quick side note: If you saw yesterday’s post regarding wireless downloading from the FR310XT straight to the web via an iPhone without a computer, I’ve updated it with new comments from Garmin.  In short, they’re looking for feedback as to whether you all are interested in seeing this sort of capability brought to the Edge cycling series of devices.  Drop your thoughts here.)

The last 24 hours have been a blur.  During this time I did everything from fly twice, do intervals in the rain, and wear makeup.  So here’s the photogenic recap!

Wednesday night both The Girl and I caught an evening US Airways Shuttle flight up to NYC.  About 35 minutes after wheels up, we were wheels down.  That’s is my kinda flight!  As we exited the airport terminal the folks from Men’s Health Magazine had a driver and car waiting – complete with a man holding a sign with my name!

A short drive later into the city and we were hanging out at a posh hotel mere feet from the offices of Rodale Publications.  They put together everything from Men’s Health and Women’s Health to Bicycling Magazine.

Since we had a bit of time Tuesday night, we went and grabbed a quick bite to eat before swinging by our favorite bakery – Magnolia Bakery.  This time around though instead of cupcakes we got straight up cake slices.  Carrot Cake.  Though, I think there was more frosting goodness than carrots. It was basically pure awesome in a slice.

Wednesday morning both The Girl and I got up early to go do our hard run workout.  It was actually a slightly modified variant of the normal Wednesday brick workout that I talked about two days ago.  Just a bit more running instead of cycling.

It poured and winded some more.

But we kept on running. 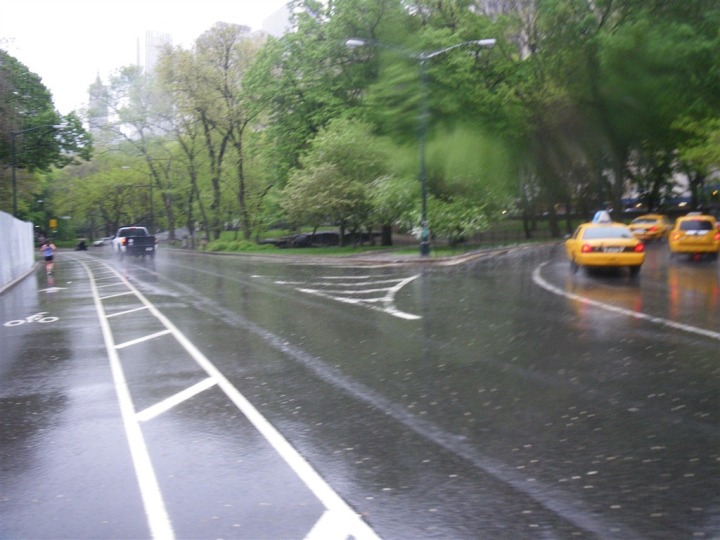 Some 90 minutes later the run was done and we were back in the warmth of the hotel, rushing to get back out the door to the Men’s Health Magazine offices.

Speaking of which, it was soon time to head over to the office: 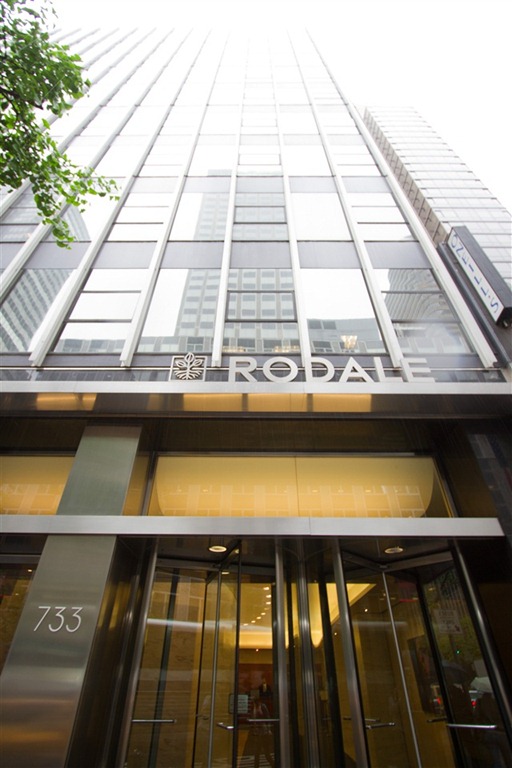 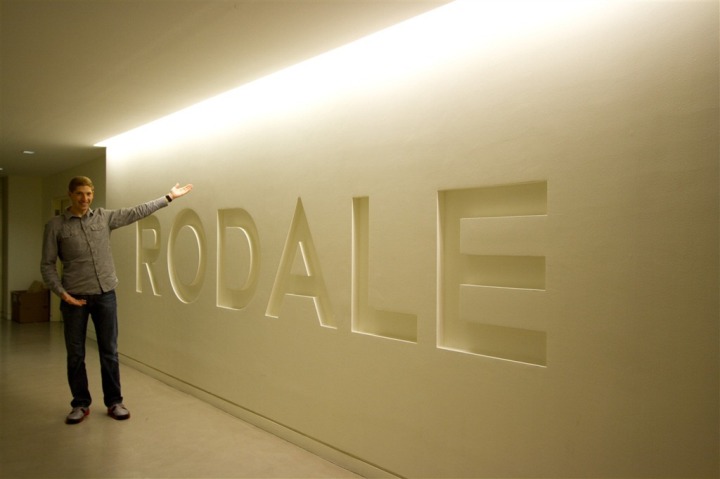 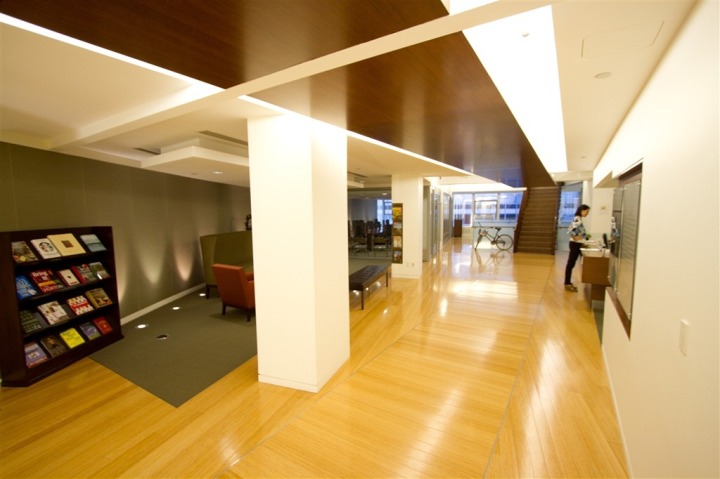 Once there, I got a rather large pile of presents.  It was like Christmas in May.  We’ll call it a pre-Cinqo de Mayo celebration: 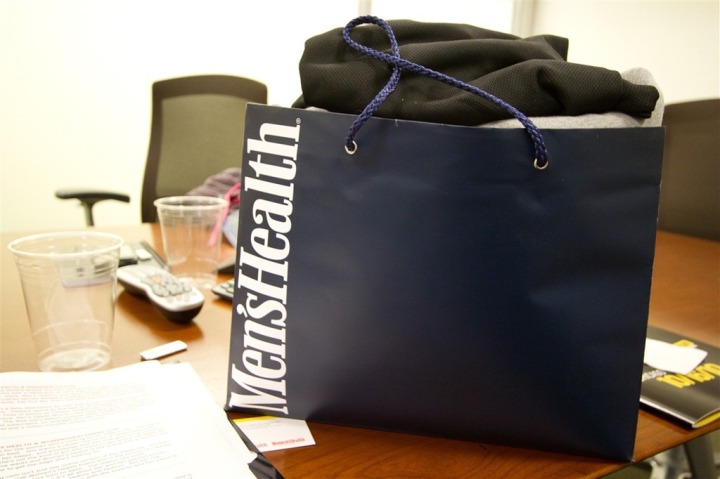 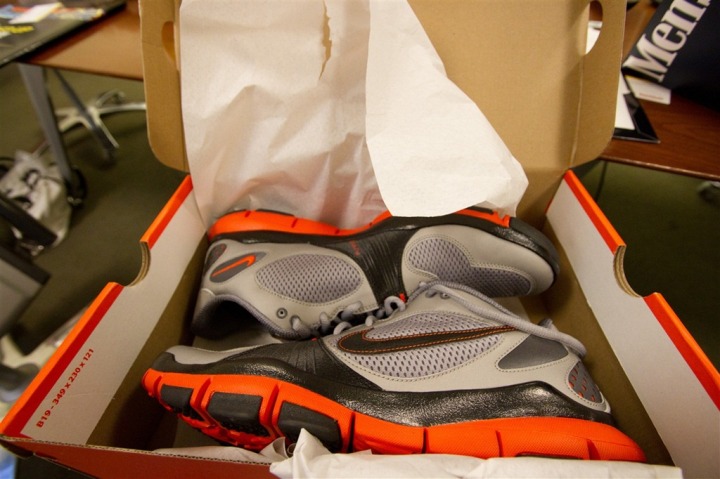 Here’s what it looked like all laid out (well, not the sports bra, that was for someone else): 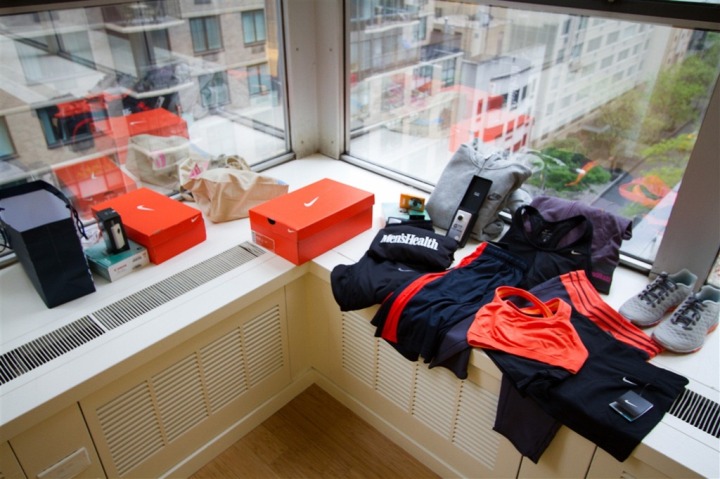 After the unwrapping, we spent the next 3 hours discussing the intricate details of the partnership, both around Men’s Health and others involved.  I’ll be holding off for a wee bit longer explaining the exact details of the partnership to y’all – but hang out, more will be revealed over time!  Needless to say, I’m pretty excited about what it means for both me – and you. But fear not, nothing’s changing around these parts.  It basically means way more coolness and resources coming to you and others (and a greatly expanded audience for me).

After our lengthily discussion about the awesomeness, it was time for the photo shoot.  Regrettably, the first step of which resulted in me wearing makeup.  Actually, in their lingo they call it ‘grooming’.  I noted in a tweet that I believe this is the first time since my grade school Christmas plays that I’ve worn make-up: 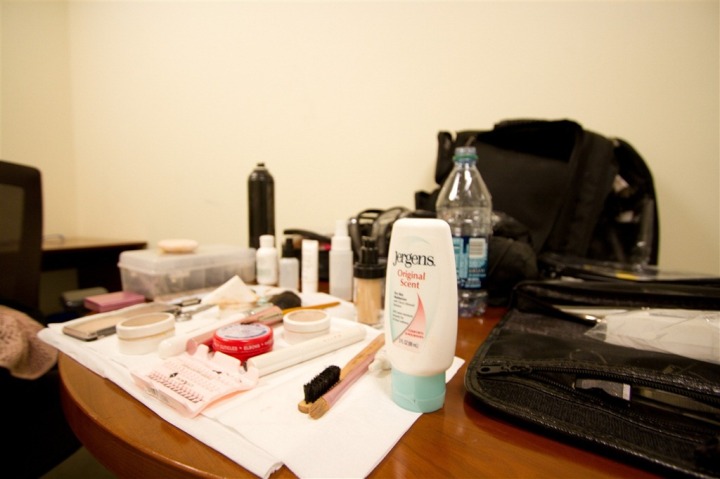 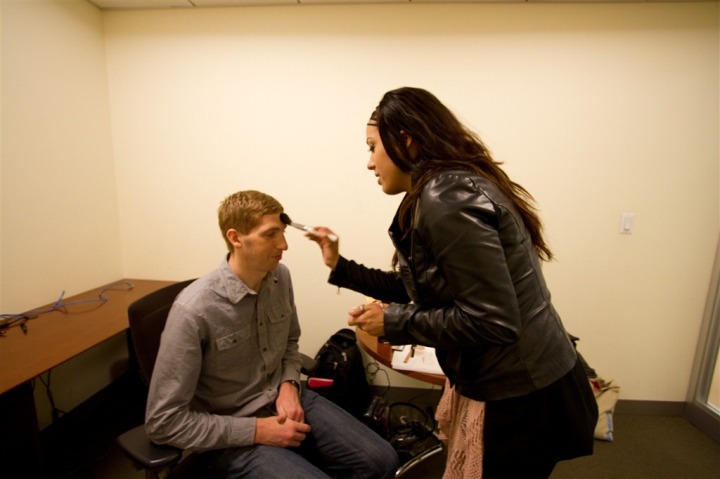 Luckily I was told that I was “good lookin’ enough” that I didn’t need much makeup.  Ha!  They haven’t seen me after a race I guess!

After the makeup touch-up, it was time to begin the shoot.  Due to the rain outside lowering the light levels, the initial location was causing some issues, but after a few secondary locations, it was settled back into an open glass room area overlooking the streets of NYC below. 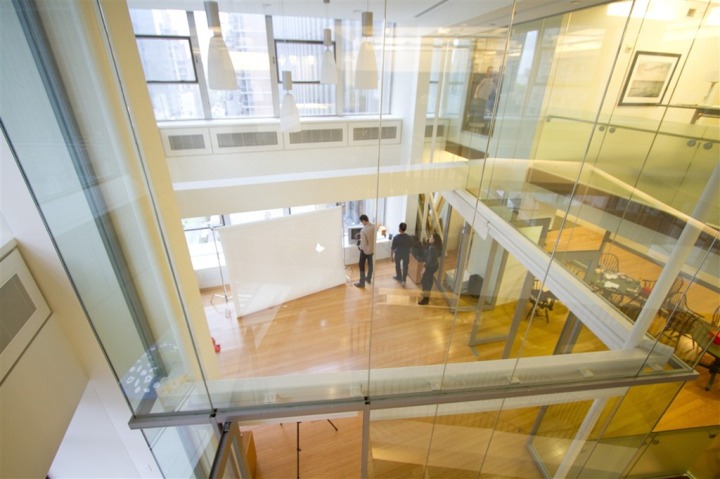 Inside they had all sorts of gear ready to go: 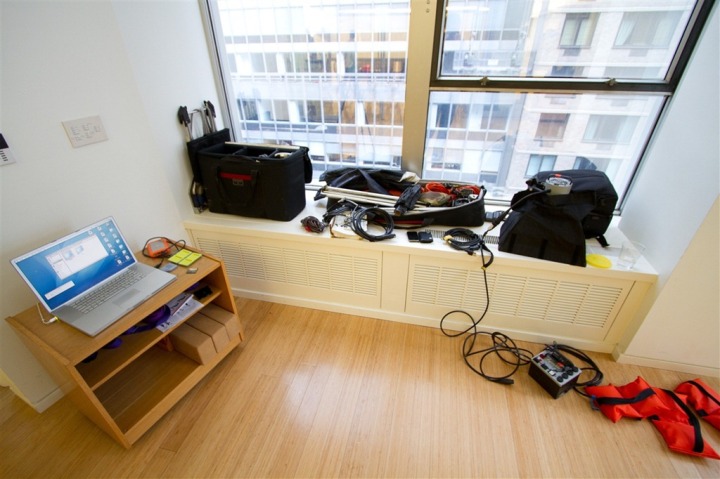 And then there was me…getting poked and prodded: 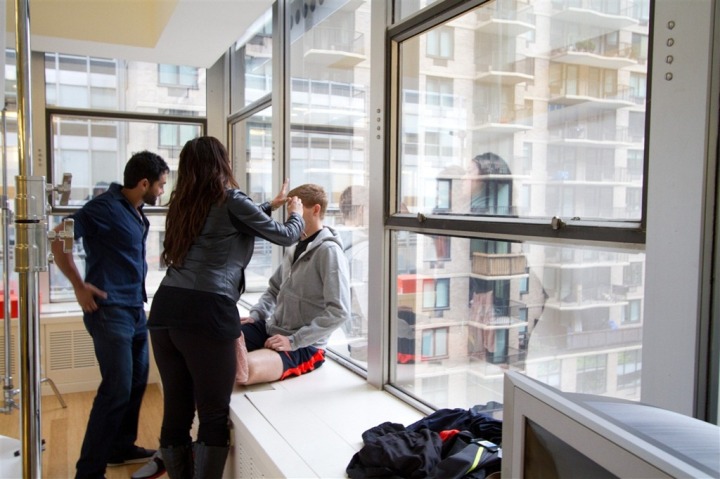 I had a large stash of clothes that I changed in and out of.  Basically I just did whatever they said.

A group of them would discuss each small set of photos, tweak something, and then take a bunch more photos.  It was pretty much just like America’s Top Model…except without all the craziness or Tyra-mail. 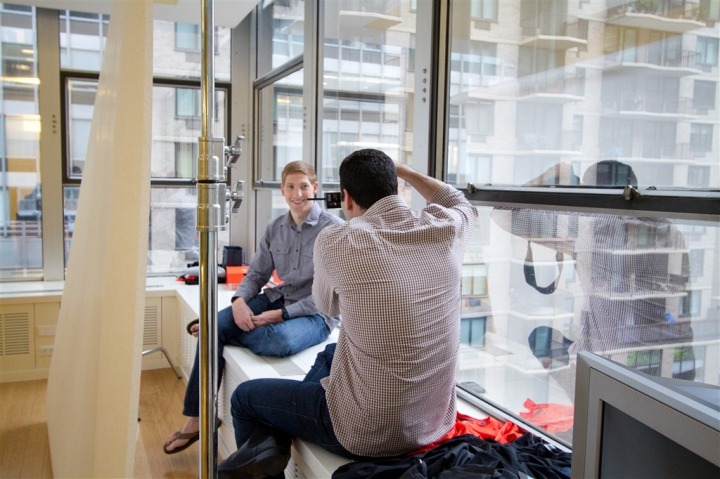 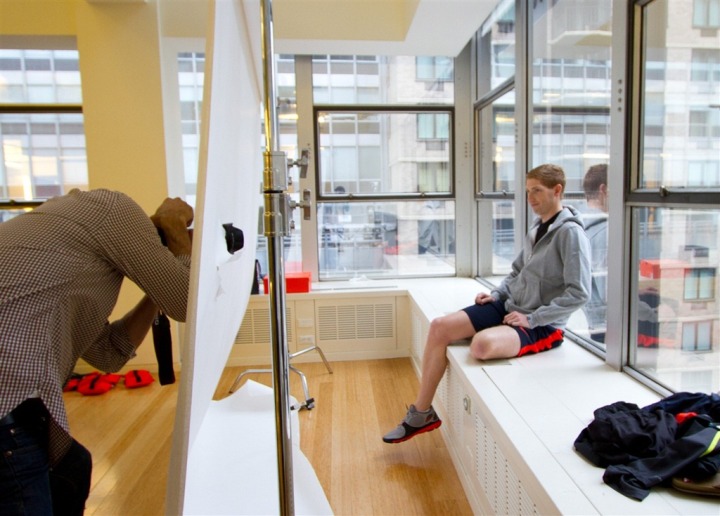 About 2 hours after it began, I was all wrapped up in front of the camera.  From there, I managed to con them into giving me a tour of the Men’s Health pad.  The gist of this tour falls into two categories.  The first is typical cubeville, except with giant poster sized magazines strewn about: 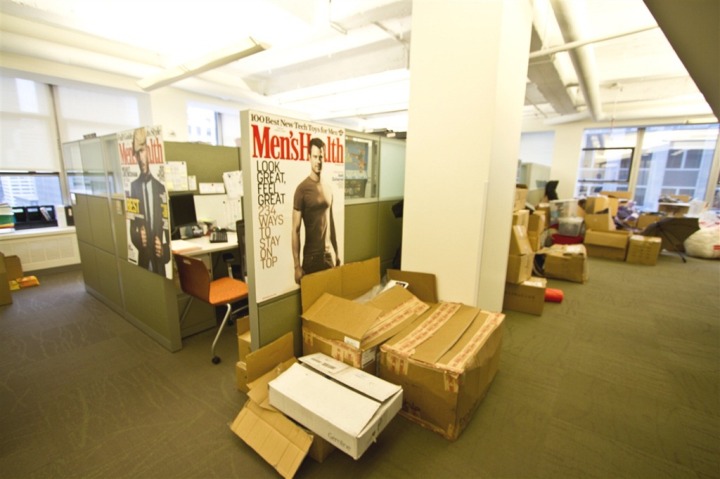 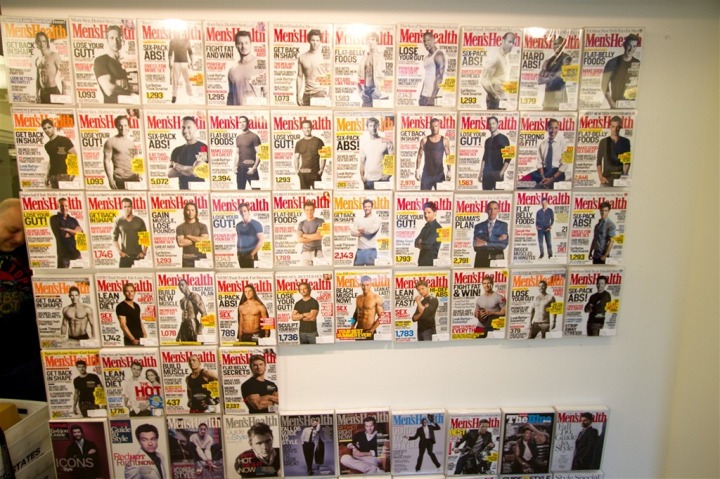 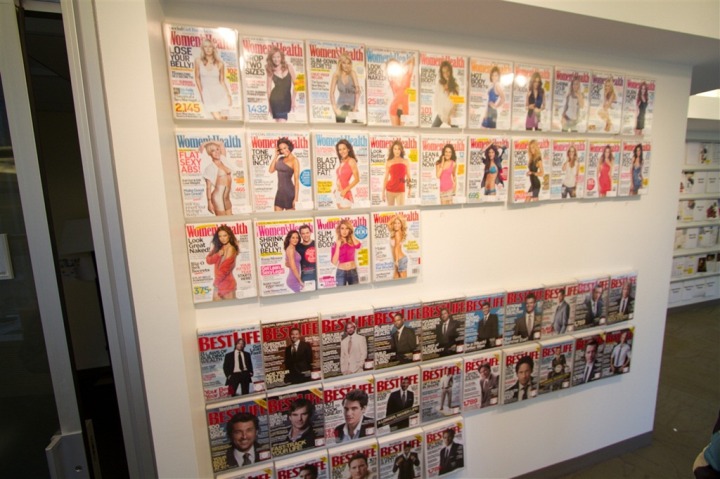 Need a copy of the most recent issue?  No worries, you can choose from Men’s Health… 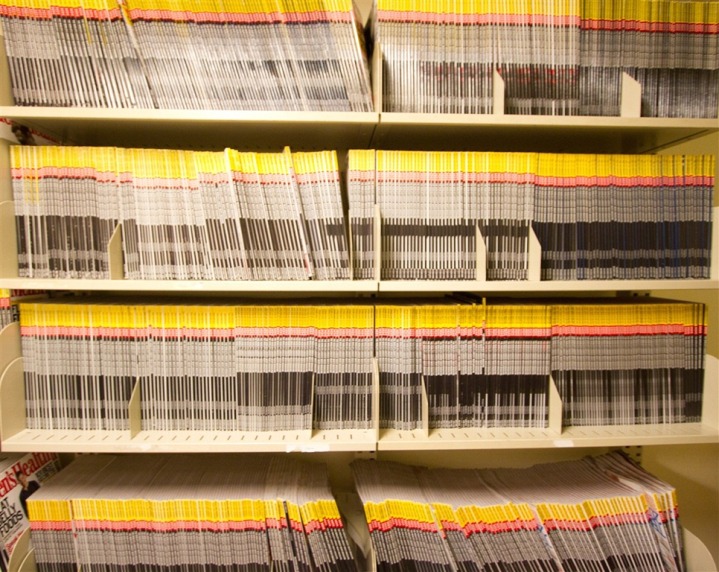 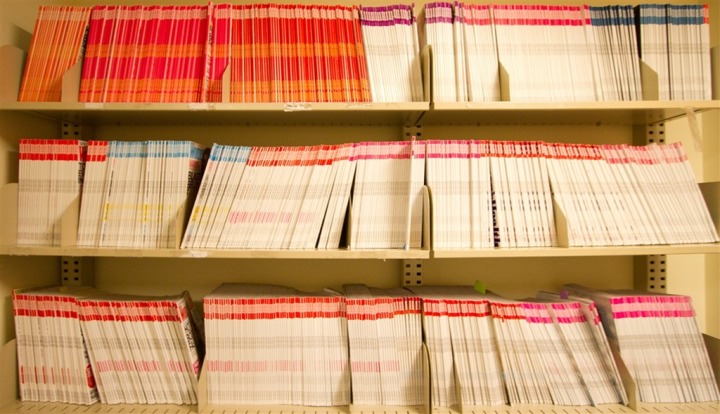 …or just about anything else that you can think of: 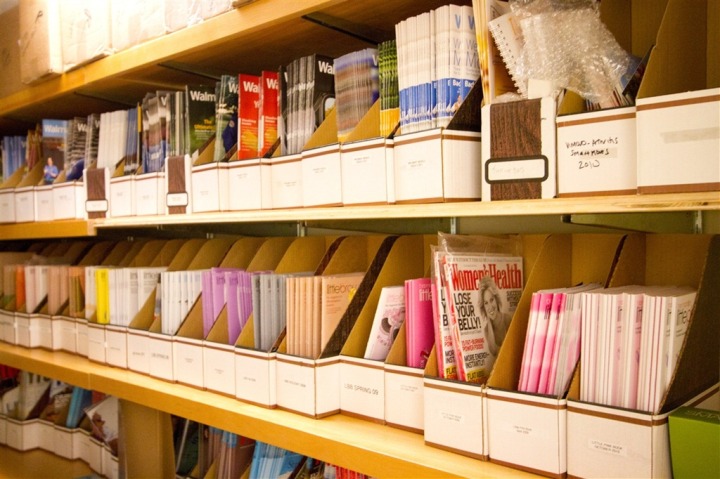 But the space also had many little subtle nods to a healthier lifestyle – namely cycling and running: 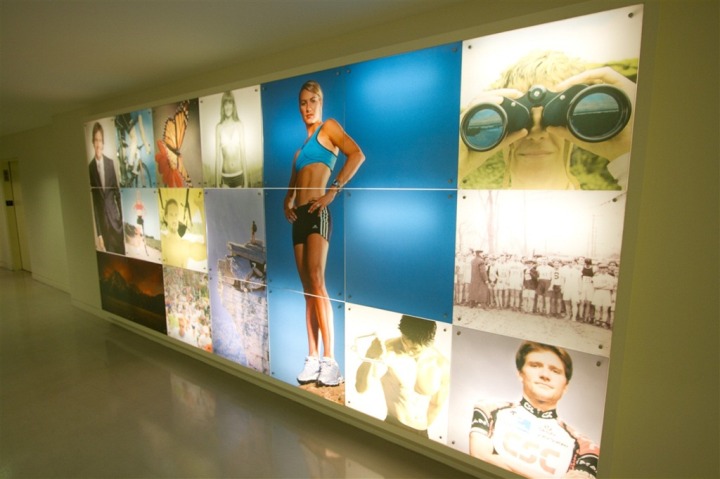 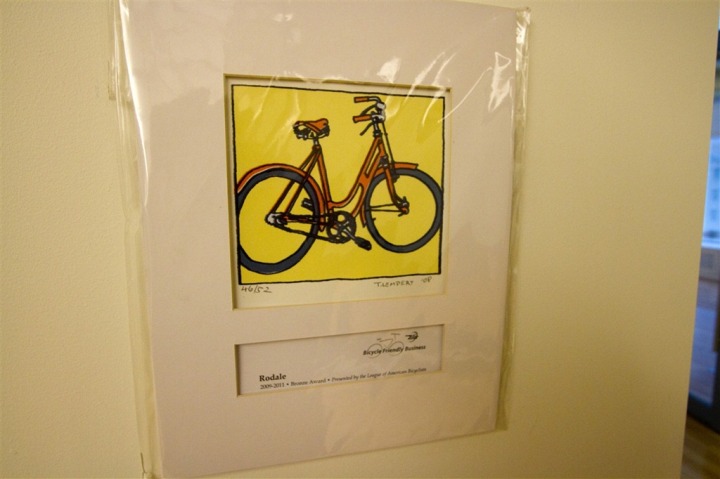 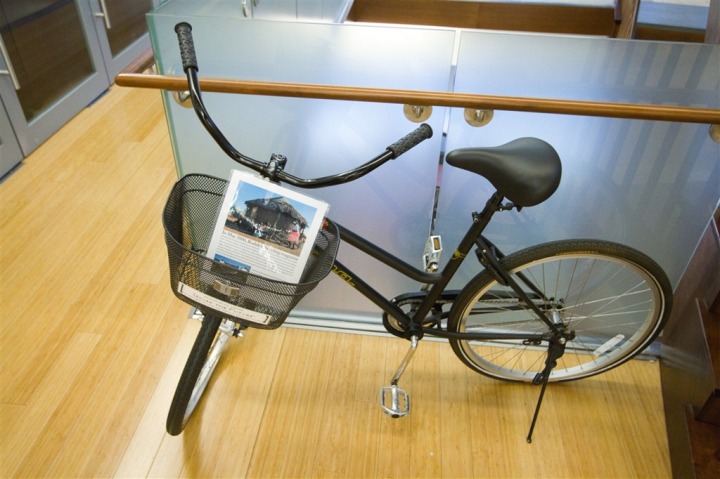 After the tour and a bit more discussion it was time for me to run back to the airport and catch my flight back to DC.  Less than 24 hours after I departed, I was landing back at Regan National Airport.

Hang on though…it’s only gonna get more interesting from here on out!