There were/are very few non-bike vendors at Interbike that actually show up at BOTH the Outdoor Demo, and the Indoor Expo.  In fact, I think PowerAde was probably about the only other one.  But perhaps that shows something about the guys from LeMond Fitness.  For a group of Western Washington folks to willingly stand in the heat under a dark tent in the middle of the desert…and try and lure people onto a trainer instead of the open road…well…that takes some guts.
(Note: I’m from Western Washington, I understand their sun-aversion).

But after they managed to get you on the trainer – I quickly realized why they were so excited to pull you into that non-heat friendly black tent. 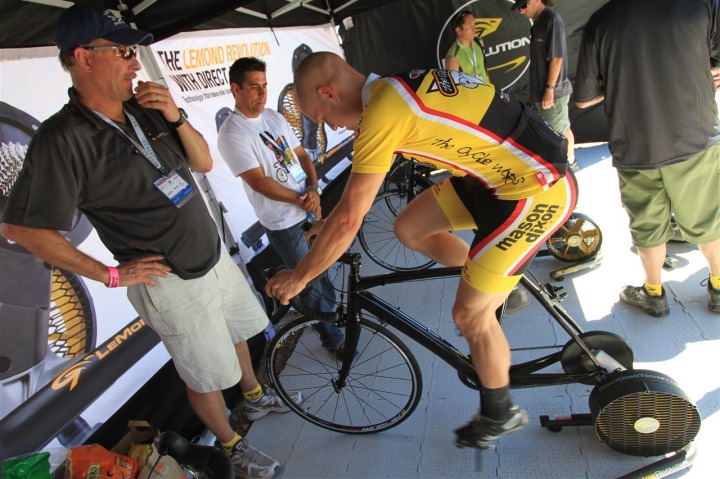 The LeMond Revolution trainer has been getting quite a bit of press as of late – and not just because they have the LeMond name attached, but rather because it has a very unique natural outdoor feel to it – while also being pretty much the first ANT+ enabled home-use bike trainer out there.  And it’s this ANT+ piece that got me interested.

If you quickly glanced at the trainer you might not realize how different it is compared to most trainers.  But once you stare closely at it you’ll notice one key item – there’s no rear wheel being used: 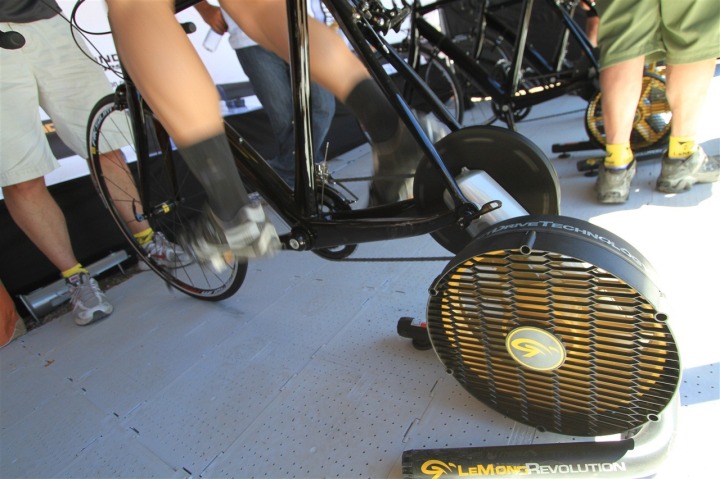 Unlike traditional trainers, the LeMond fitness trainer replaces the entire rear wheel and cassette with its own.  Why do this?  Well, aside from cutting down on the wear and tear on your tires, it also cuts down on the little black tire/rubber dust that ends up coating anything nearby.  Double bonus! 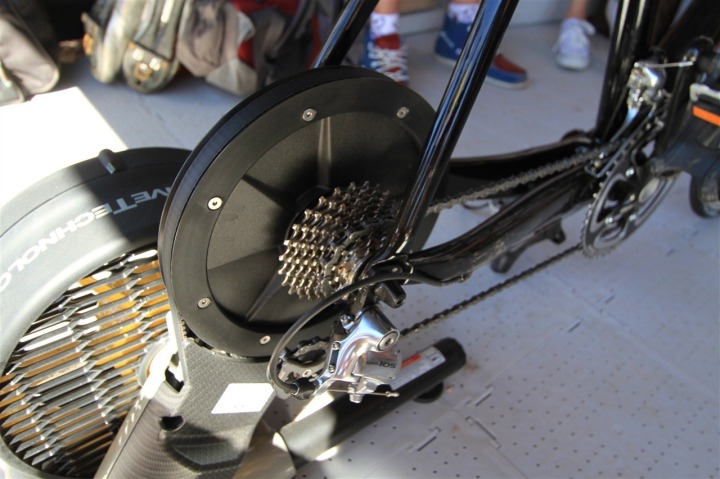 But more importantly, this helps to address one key area missing from many bike trainers: The feeling of actually riding on the road.  Typically on a trainer, if you coast (stop pedaling) – the resistance on the tire will very quickly stop the wheel, so much so that it generally feels unnatural and doesn’t feel as though you were just coasting to a stop as if you were normally out on a ride.

But, with the LeMond trainer, it’s probably one of the most interesting indoor trainer experiences I’ve had.  After pedaling up to speed, I just simply stopped pedaling and let the trainer just along, slowly coming to a stop naturally as if I were out on open flat road.  There’s a lot of math and science behind why and how all this happens, which this article from NY Velocity does a good job at covering – so I’ll have you head over there if you want all the deets on exciting mathematical wind resistance curves.

Suffice to say, it felt like no other trainer.  And that was the general feeling from a few other folks that stepped into the booth while I was there as well. 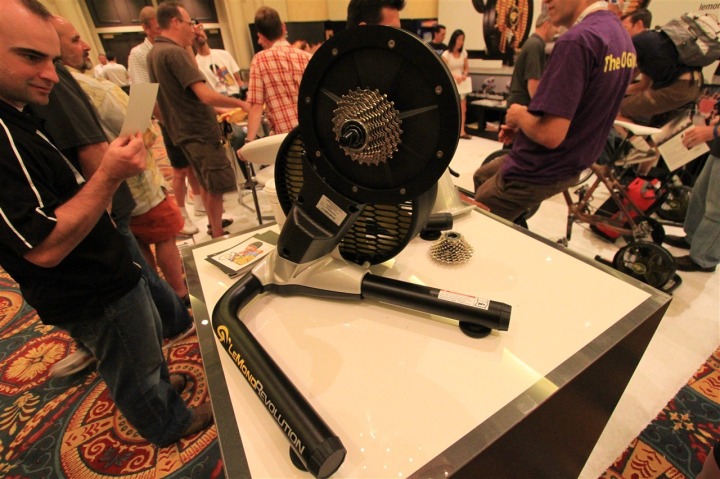 Also, because it uses a replaceable cassette, you can swap just about any bike you can find in your garage onto the trainer – from road to triathlon to mountain bikes, as you can see here on the three different trainers: 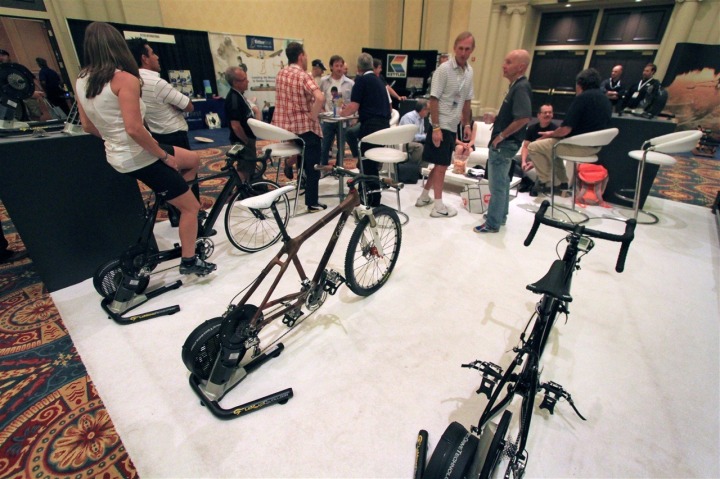 Ok, before we get into the actual console – I should mention a point of minor cycling importance.  While at the booth I stumbled into Greg LeMond…who was busy signing some guy’s 24-deep jersey collection…thus because I’ve now sorta met a celebrity – that might somehow raise my celebrity status like 1/90th of a point: 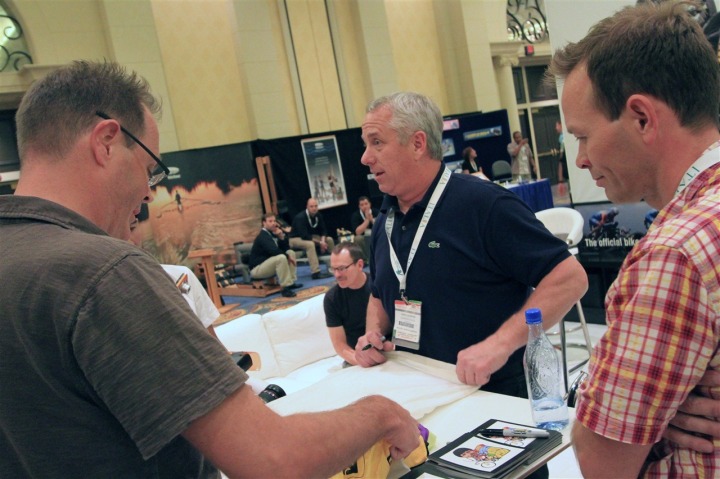 Ok, with that important note out of the way…onto the device…

The next piece of the LeMond Revolution Fitness trainer is the ANT+ components that make the whole setup capable of of measuring your power output via ANT+.  This requires two parts.  First, is the less exciting piece – the small silver attachment for the back of the trainer: 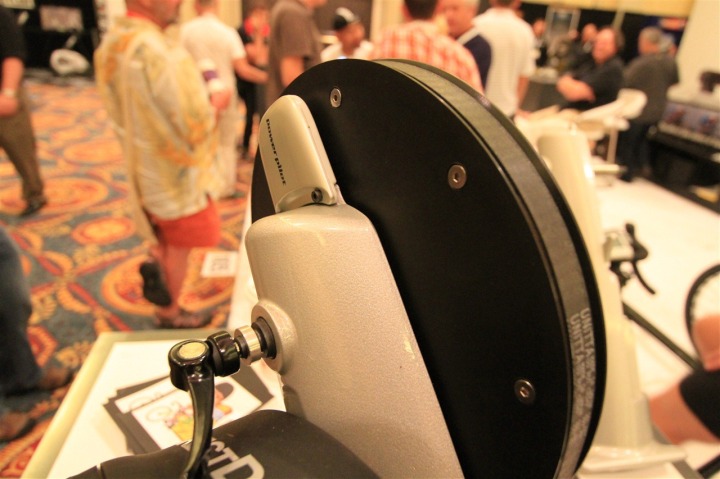 But next is the fun piece – the ANT+ Head Unit, which displays and records your ANT+ data – including HR, Power, Speed and Cadence: 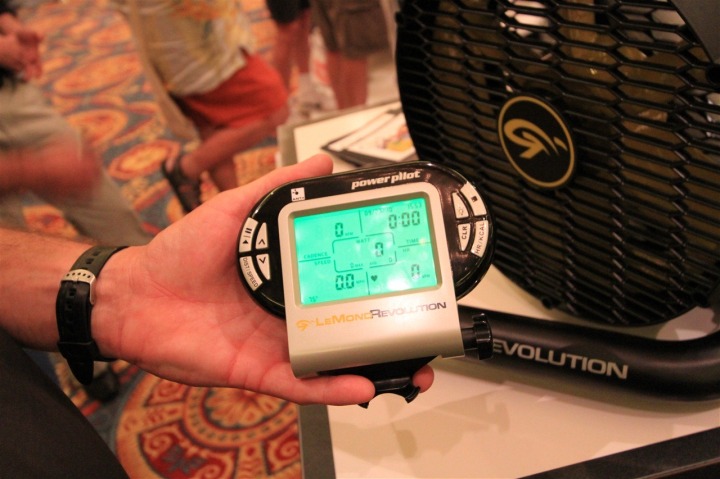 This works via that little silver component on the back of the trainer taking into account the current temperature, humidity, altitude and then the speed of the fan blades to determine your actual power output (watts).  In addition the unit can determine your speed & cadence.  Then it takes all that information and displays it up on the power pilot head unit.  Think of the whole process like a giant calculus equation…except all without strain gauges (even if it does strain your brain to think about). 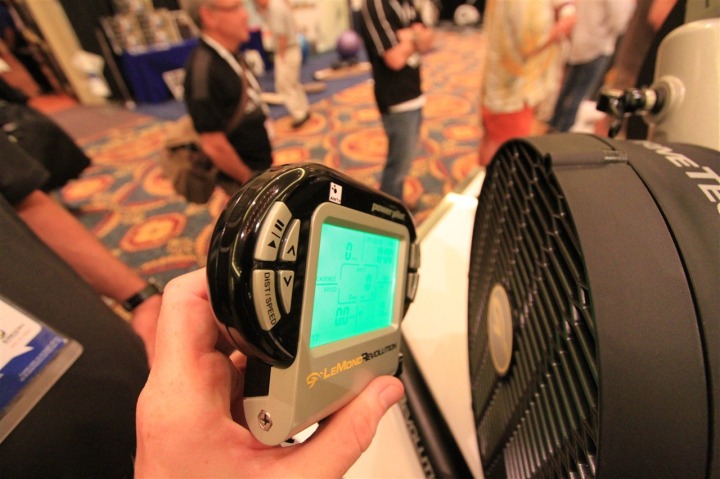 While the power pilot is a bit bulkier than your average cycling computer, it’s also important to note that you aren’t going to ride away from your living room with it – so size isn’t too much of a concern.  Additionally, they’ve designed the mount system so it can actually mount it straight to your front wheel.  Which, once you think about it – is actually a pretty logical place for it – especially if you’re doing aero-position training. 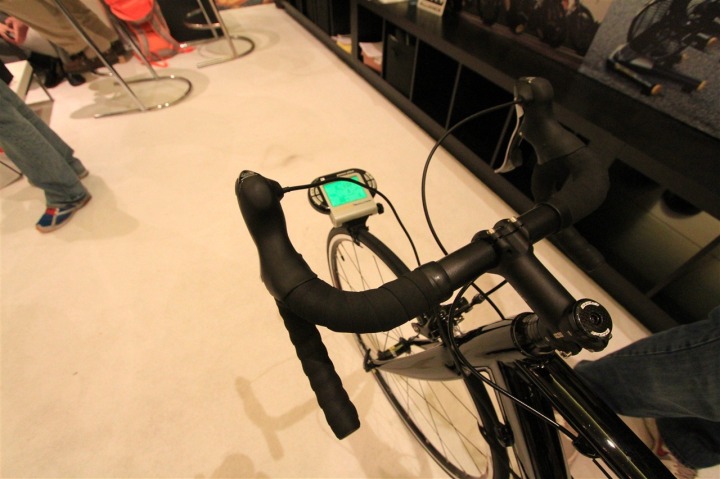 Also, no components of the trainer require power plugs or wires – it’s completely wireless.  The head unit runs on battery, and the main ANT+ transmitting portion connected to the trainer itself uses the power you output to generate the required electricity.

Finally, when it comes to getting your data, you simply attach a USB stick to the Power Pilot to grab the data.  From there you can then connect that to your computer and upload the data.  The data files by default are in CSV format, and can be easily uploaded straight to Training Peaks or into WKO+ (or any other program that support CSV files…which…is basically all of them).

While today you can’t go straight from the trainer to another 3rd party ANT+ head unit like a power-friendly Garmin Edge 500 – it is something that LeMond is working on based on the feedback they’ve heard.

However you can transmit the data wirelessly via ANT+ to an enabled watch that supports ‘Fitness Equipment’, like the Garmin FR60 – which will upload all that data straight to any program compatible with the Garmin fitness units (Garmin Connect, Sport Tracks, Training Peak, etc…).  Inside the data files you’ll find speed, cadence, HR, calories, power (watts) and time.  I’ll actually show a working demo of this concept in my next post.

On the workout front, you can also download workouts to the Power Pilot, including the ability to ride workouts from Training Peaks as created by your coach (or yourself).  The console will simply beep at you at the appropriate times telling you what to do next.  You can control all sorts of options such as Power Zones, % Threshold Power, HR Zones, % Threshold HR in the workout files.

One thing that it’s important to note is that this trainer won’t control wattage, but rather just report it.  Meaning, it’s up to you to control your own workouts and change gearing to meet your wattage requirements.

It’s also worth nothing that while you can use the base LeMond Fitness Trainer without all the attached gadgetery – I think that it’s just well worth the extra incremental cost at that point, especially if you don’t already have a power meter.

The trainer itself is $499, which is admittedly a bit steep for a trainer.  But the Power Pilot piece costs an additional $349US.