Note from Ray: Hi All!  I’m venturing into my first guest poster on the blog.  Bruce is not only the guy who takes all my awesome triathlon race pictures, but also flies The Girl and I around to races.  Bruce has put together a great post on taking photos at triathlons that everyone can understand and relate to.  Hope you enjoy it, and thanks for stopping by!

I am the guy that takes some of the race day pictures that Ray uses on his blog site. I am not a professional photographer. I just like gadgets (cameras) which is pretty much a requirement to be friends with Ray. I have attended a number of Ray’s races as the un-official photographer. I suggested that I might share a few tips and ideas that I have collected about taking pictures at a triathlon (apparently the creative well in rainmaker-land was fairly low because Ray agreed).

I apologize in advance for using some camera-nerd terms.

So without further ado:

Your camera choice is not particularly important. I shoot with a Canon 7D dSLR but just about any reasonably good SLR will work fine. I generally shoot with a fixed focal length (prime) 50mm lens and occasionally use a fixed focal length 135mm lens. Zoom lens work well too (but are over rated for shooting a triathlon). The most important thing to understand is that framing your subject correctly and using the camera settings properly are far more important than the brand (or cost) of your camera.

Deciding on the best shutter speed is important and most beginners get it wrong. A faster shutter speed is usually not going to improve your photos very much. As a starting point, use the old photographer’s rule of shooting at “one over the focal length of the lens”. For example, if you are using a 200mm lens, plan to shoot at least at 1/200th of a second. The idea in a triathlon is to convey a sense of speed and energy so using a slower shutter speed is usually better than using a very fast one. I generally try to shoot at 1/320th of a second or slower.

Depth of Field (DOF) is defined as the distance from the nearest in focus object to the furthest in focus object. There are lots of things that affect DOF including aperture, lens focal length and focus distance. The topic is probably too advanced to discuss here.

The bottom line for sports photography is LESS IS BETTER. You want your subject (the competitor) to jump out of the background. The best way to do that is to have him be in razor sharp focus while the background and foreground have a pleasant fuzziness.

The easiest way to get that thin depth of field that you want is to shoot with the aperture wide open or nearly wide open. Use the ISO setting and the shutter speed to keep the aperture as far open as possible. For example, my 50mm lens has a wide open setting of 1.4. I always try to use 1.4, 2.8. or 3.2. If I stop down any further than that, I know I am going to get lots of distracting detail from the background in my image.

Here are a few pictures showing the difference. 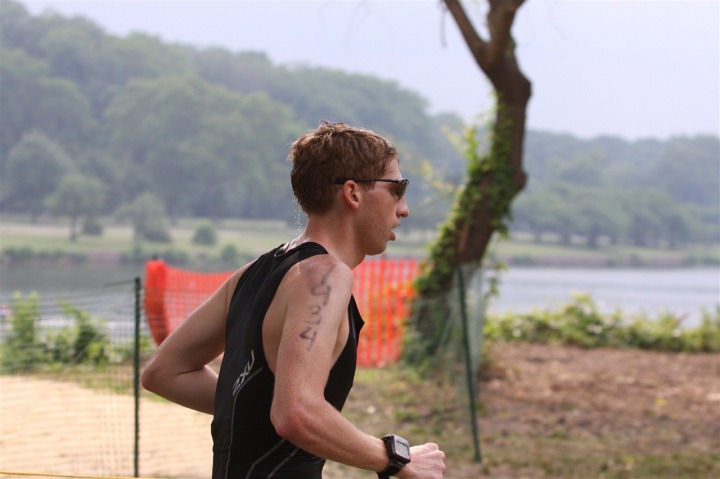 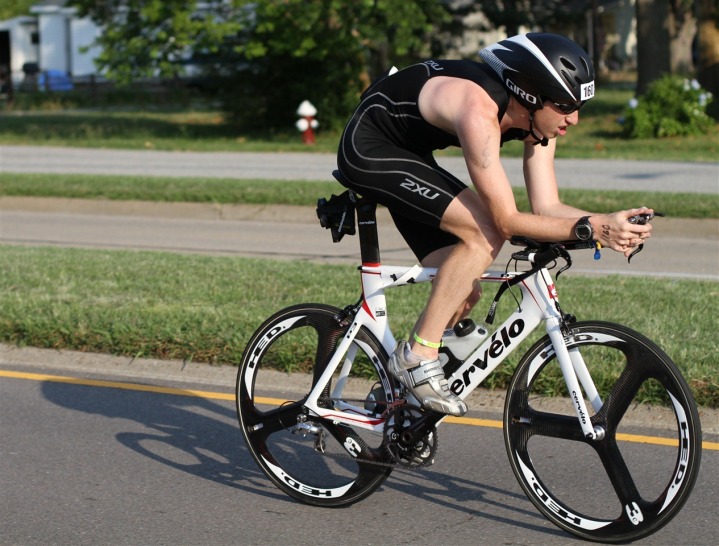 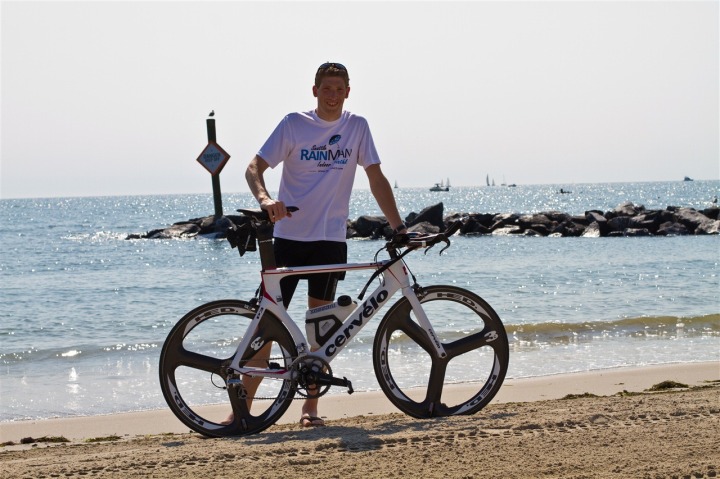 Now take a look at these two: 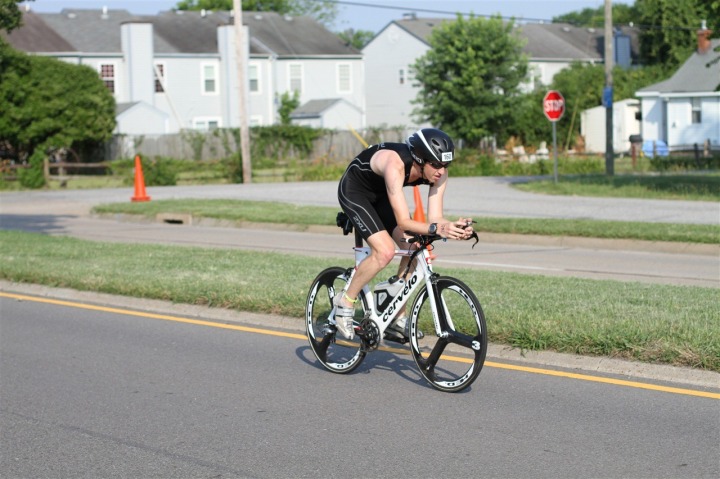 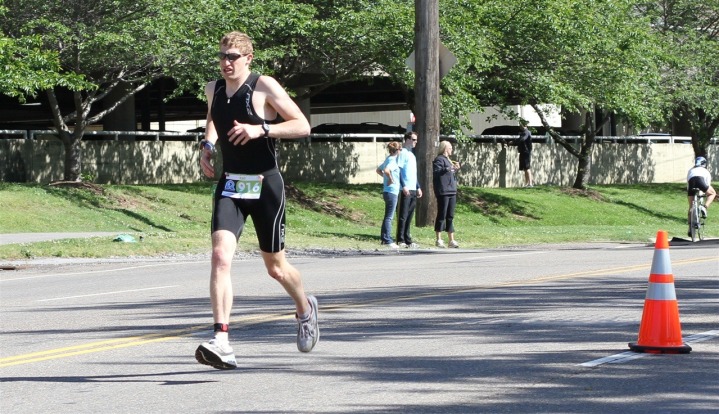 Don’t you agree that the last two are not as interesting because there is too much detail in the background?

You can really improve your triathlon photos by thinking about angles and how to properly frame your shot. A personal note here: after a race, I typically give all my photos to Ray and he decides which ones to use. Sometimes he uses ones that I think are framed poorly or that have some other flaw. My personal theory is that he selects ones that he thinks make him look good…

Here is my number one framing tip: Get low. For reasons that are hard to explain running/cycling pictures look much better when you are shooting upward. I will often sit down on a curb to shoot cycling and running. Getting low helps mitigate another problem that is particularly nasty on the bike segment: faces in shadow. The lower you are the less severe the shadows will be on your subject’s face.

Another good idea is to slightly lead your subject so there is more of the scene in front of him then behind him. This makes it seem that he is running/cycling into the frame rather than out of it.

I accidentally discovered that taking a picture of a runner or cyclist in a turn makes them look like they are going much faster. I am sure veteran sports photographers have known this forever but I am still going to claim it was my idea. So go out and look for a place on the course with a nice tight turn in it and use it to your advantage. Take a look at these pictures to see what I mean. 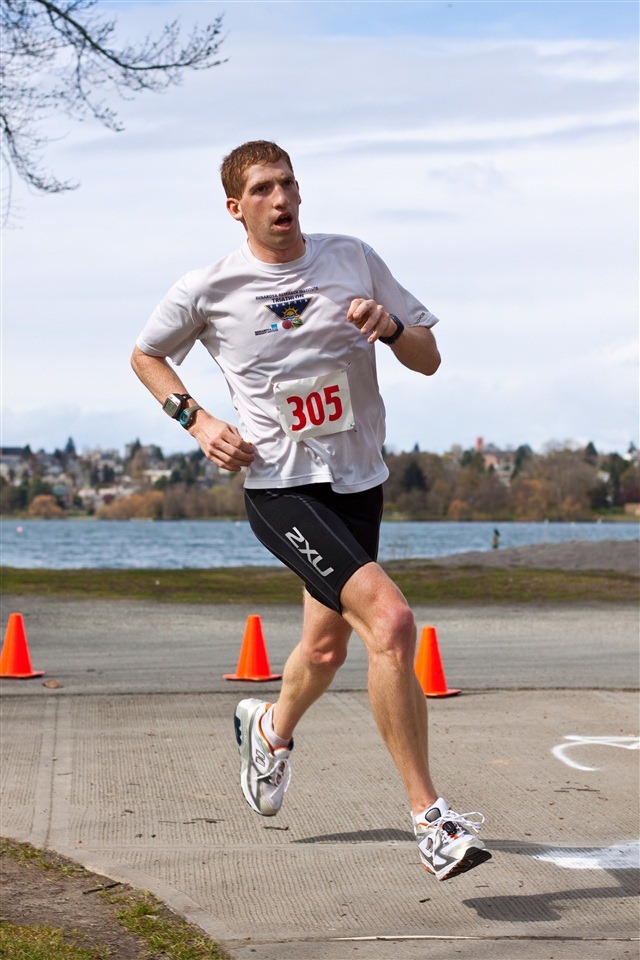 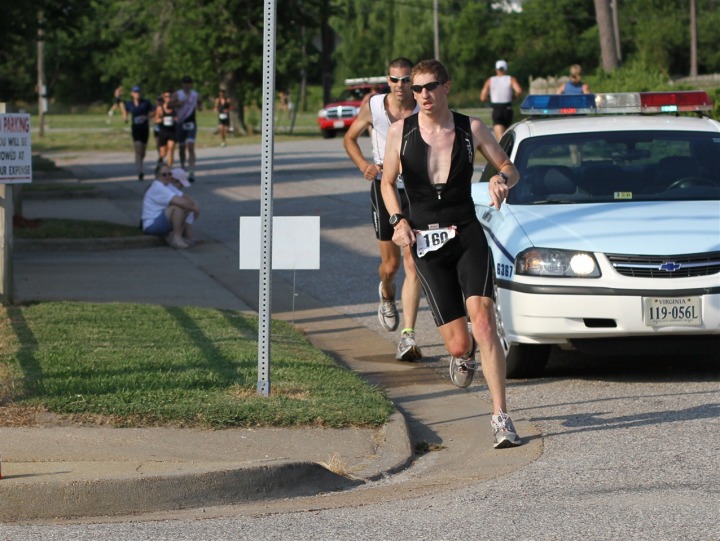 Now compare to ones taken without curves: 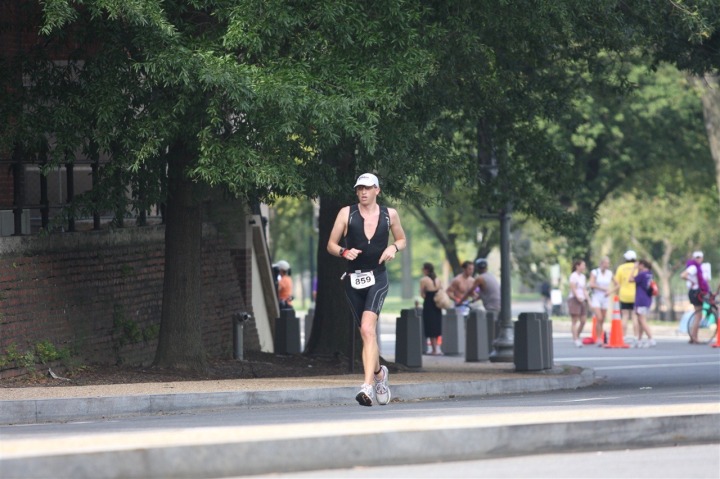 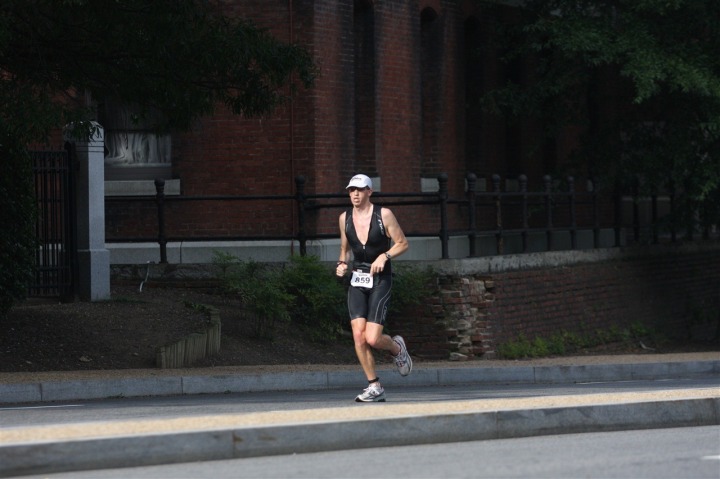 This probably seems obvious but I will mention it anyway. Avoid pictures from the back. They are almost never flattering (I think it has something to do with wetsuits/tri-suits not having a slimming effect). You may occasionally get an interesting picture of a bike mount/dismount, but in general pictures of peoples’ backsides are not that visually interesting (even if you like the person you are photographing).

Here is a good example of what I am talking about: 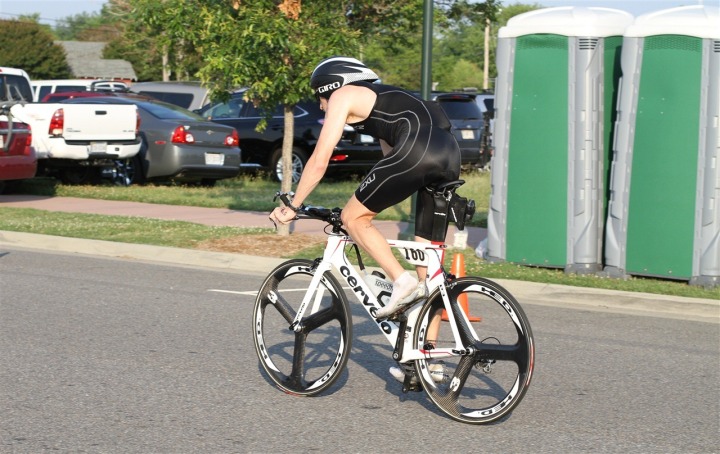 Negative bonus points for the port-a-john in the background.

Don’t get too close to the bike dismount area. Most experienced triathletes take their feet out of their shoes a short distance from the dismount. This makes for an odd looking photograph.

Here is my number two framing tip: Avoid distractions in the background. Nothing ruins a great picture of a streamlined athlete flying past you on a bike at 25 mph like having some guy in a lawn chair in the background stuffing his face with a hotdog. You can lessen the impact of the background by blurring it with a sweeping motion of the camera or using shallow DOF (see above) but the easiest thing to do is check your background before you shoot. While waiting for your athlete to arrive, shoot a few test shots of other athletes (this assumes your guy is not number one!). Take a hard look at the background for things like trashcans, hurricane fences, baby strollers etc. You will be surprised how many “things” are in the frame that you didn’t see when you were looking through the viewfinder. Scout around a bit for a fairly uncluttered background near a turn in the race course.

Here is an example of an otherwise good picture with a background problem: 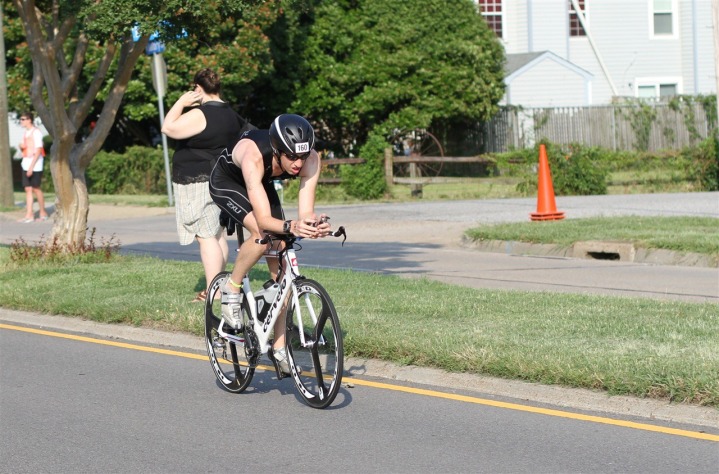 And one that came out better: 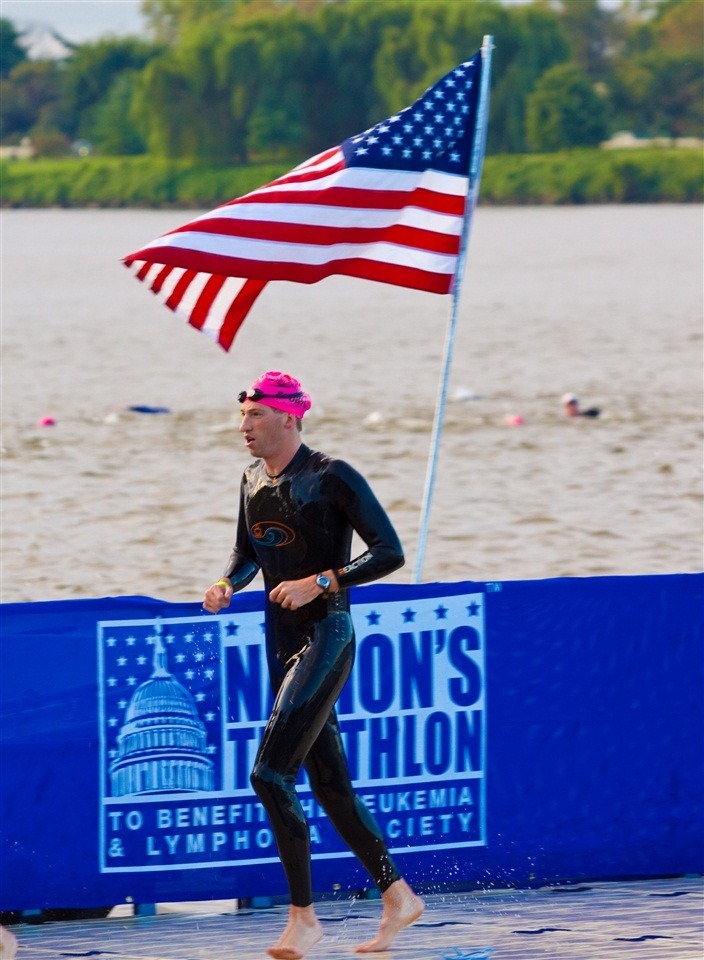 You will note that I have said little about swimming pictures. That is because there really isn’t much you can do to take really good swim pictures. If the race features a beach start you can try to use a fairly wide angle lens to get all the splashing of the swimmers into the water. If the swim parallels the shore, you may have success very near the start using a telephoto lens to capture a breathing stroke of your competitor. Again, get low for the best shots. Forget about trying to pick him out further into the swim – everyone looks exactly alike 100 meters into the swim.

The finish line is a pretty decent area to take pictures, but you will likely be fighting for space with spectators and other photographers. Try to get both the finish line banner and the race clock into the photo. Expect other competitors to be finishing around your competitor – there is high likelihood that you will be blocked at the last moment. Again, watch for the distracting background. 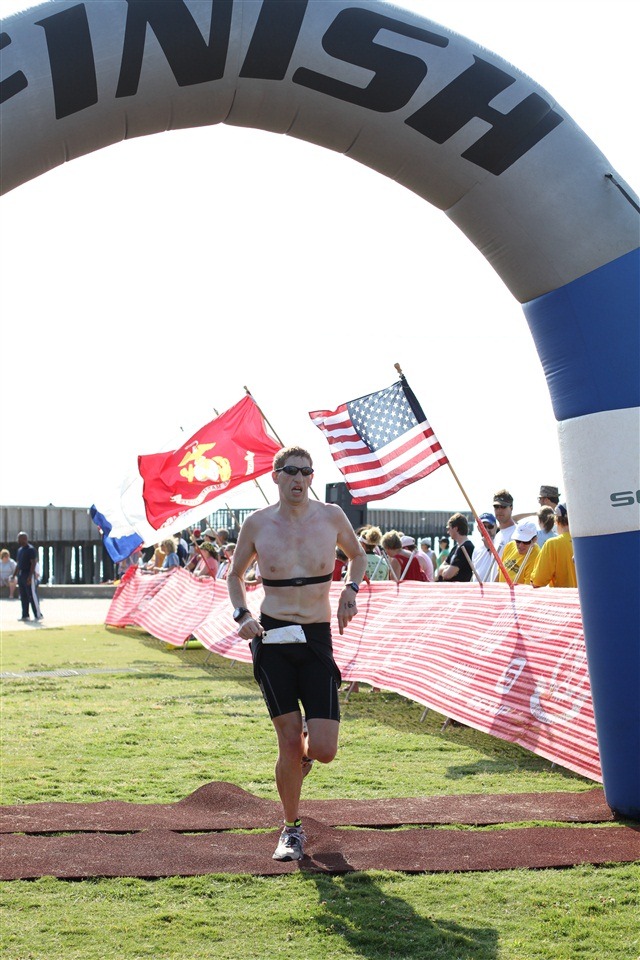 Don’t forget to take some pictures before and after the race. I like to take close up pictures of race bibs, and race markings. Another fun thing to try is to get photo reflections from sunglasses or even swim goggles.

This section is just a bunch of random thoughts that may help you get better pictures but don’t fit in the topics above.

I wouldn’t bother bringing a tripod to a race. They are generally too heavy and a pain in the you-know-where to carry around. You may want to try a monopod (Manfrotto makes very good ones). They are much lighter and easier to carry and can really help if you are trying to take sweep action photos.

Remember what your competitor is wearing. I have lots of photographs of people that look vaguely like Ray and “the girl”. When a competitor is coming right at you on a bike at 20+ mph, it’s difficult to be sure you are shooting the right person. Take a mental snapshot of their swim cap color, bike color, helmet color etc. before the race.

Plan your position and movements before the race. I look at the course and try to find places that make it easy to move between events quickly. I am often trying to take pictures of both Ray and “the girl” and so I have to transition from the bike course to the run course and back several times. Luckily for me, they typically are just far enough apart that I can find multiple opportunities to take pictures of each of them.

Consider where the sun is when you are choosing a spot to shoot. The sun directly behind your subject means that you will likely have their face in the shadow (of their helmet or running cap). It is better to have the sun to one side or behind you. I also like to over expose my pictures just a bit (+1/3). Too much overexposure will wash out all the detail but just a bit makes up for the typically bright backgrounds on race day. Of course, you can fix an awful lot of exposure issues with post processing using software like Adobe Lightroom.

Take lots of pictures (but use them sparingly). I once lamented to a more experienced photographer that only about one out of ten of my photographs were “keepers”. His eyes got huge and he said, “You get that many good ones???” The professionals take hundreds or even thousands of photographs just to get the one really, really good one. But here is the important thing to remember: get rid of most of the bad ones. Rather than put twenty blurry, or incorrectly exposed pictures on Facebook or your blog just use the one or two really good ones. Who has to know that you started with 100 ugly ones?

I mentioned Adobe Lightroom above. My guess is that even the best picture you take can be made better with a bit of cropping, straightening ,exposure and color correction. Crop out that distracting partial body part from the edge of the photo. Add a bit of contrast or saturation back to a photo (bright sunny days tend to wash some of the color out of an otherwise nice picture). You can use the controls for white balance and hue to improve skin tones. Lastly, nearly every picture can use at least a little sharpening.

I will end this post with my personal pet peeve. I cringe when I see a nice photograph that is framed to cut off people’s feet. Usually they are posed photos from a small pocket digital camera but they just bug me. I would actually rather see the very top of someone’s head cut off then a mid-ankle amputation. Step back a couple extra steps and get your entire subject into the picture. 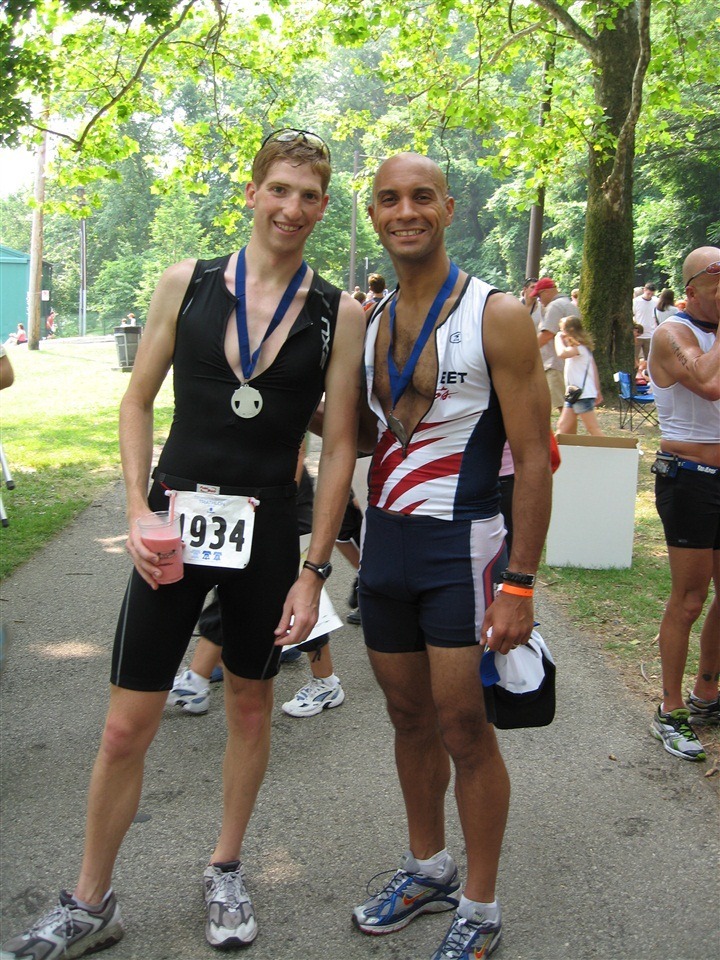 BTW, I am toying with doing my first tri. Maybe a sprint in the spring.