Over the past week and a half of watching the Tour de France, you may have stumbled upon a site that allows you to track Team HTC-Columbia’s riders power, heart rate, cadence and speed data in real-time from your computer live.  While similar efforts have been done in the past, they’ve never quite reached complete coverage of the race like this year – nor has there been the accessibility to people like you and I.  Now however, we can not only watch them live on TV, but we can also snoop in on their actual heart rate, power and other bike sensor data – all in real time. 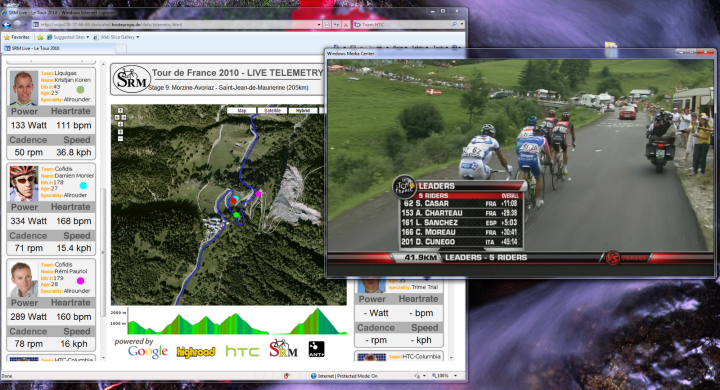 But, how does it all work?  Well, I had a chance to get all the details from the different team players in a number of organizations, including Team HTC-Columbia, ANT+, and Google.  So, let’s get into it…

The story essentially starts out just like any other cyclist would if you used ANT+ sensors (all Garmin Fitness device users for example).  Each bike is outfitted with an SRM power meter with cadence support, an ANT+ speed, and an ANT+ heart rate strap.

From there the sensors wirelessly transmit the data to the HTC Legend phone running Android.  The kicker here is that this phone actually has an ANT+ receiver chip built into it.  The Team got a special firmware update to enable the functionality, as it’s otherwise disabled.  I’ll talk more about that in a minute.

While the ANT+ bike sensors are continually transmitting the data to the HTC Legend, an application called MyTracks runs on the phone and parses the data.  Then in real-time, the data is uploaded to Google servers which receive the data stream and host the site.  The stream can then be consumed by a number of other sites/organizations as they see fit.

Here’s a quick diagram of the whole deal:

As noted above, the first step is measuring the data.  This is accomplished via ANT+ sensors on each riders bike.  They are using SRM’s ANT+ power meter to measure power and cadence, which is an indicator of how much ‘output’ the rider is generating.  An attack for example will have a much higher output than one coasting within the peloton.  You’re typically going to see steady-state power values of between 275w and 325w for most of these guys.  Of course, you’ll see pulls at much higher values along the way as well.

The second component is the ANT+ capable heart rate strap.  The heart rate strap is measuring the riders heart rate in beats per minute (bpm).  One of the cool things you’ll notice if you watch enough of the race side by side is how often the riders are conserving energy, primarily by staying within the peloton or within another riders draft zone.

The second indicator you can use that a cyclist is ‘hitching a ride’ in the peloton is by looking at the riders cadence.  Cadence measures how many times per minute the cyclist rotates the crank.  Typically for steady-state riding you’ll see values from about 85-105 RPM.  However, when coasting these numbers will drop down to either zero, or perhaps between 20-50rpm, basically just a soft pedal (descending of course will show low cadence in some cases).  For example, in the below snippet, you can see that the rider is only at about 133w, with a fairly low 111bpm heart rate.  Add in the cadence and it’s pretty clear he’s just coasting along. 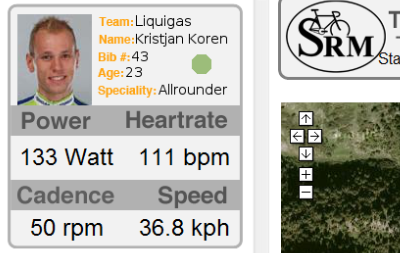 Finally, it should be noted that ANT+ data is continually streaming from the sensors.  Because it’s not encrypted, it can actually be picked up by anyone with an ANT+ data receiver nearby.  For examples of different ways this could be used, check out the Wahoo Fitness ANT+ iPhone dongle that I gave a first look review at back a few months ago.  Same basic concept, though different phone.  Speaking of phones…

The key differentiator between this system, and ones used by both other teams as well as those in the past, is that this is using a normal off the shell cell phone.  Each rider has a HTC Legend Android phone that’s placed in a saddle bag below their seat.  If you watch The Tour closely enough, you’ll actually see the small bag below the Team HTC-Columbia riders seats, here’s a little snippet from yesterday’s stage, where I’ve highlighted the seat area and bag: 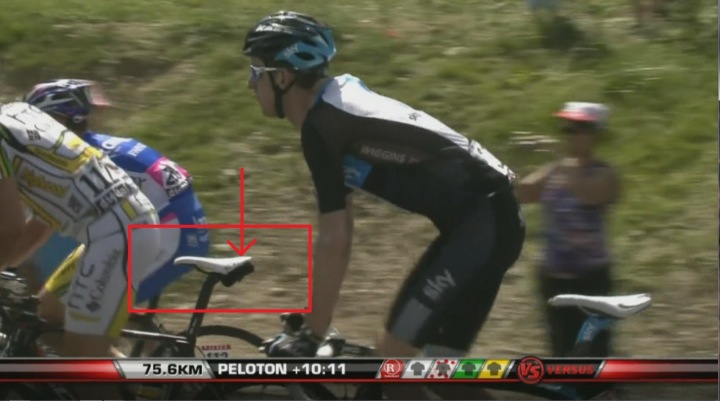 So you may now be wondering how a normal cell phone picks up ANT+ signals.  Earlier this year Texas Instruments introduced their WiLink 6 (1271) chip.  This chip on the phone is responsible for not only all WiFi and Bluetooth functions, but also ANT+.  In effect, the phone becomes your ANT+ head unit.  I talked about this back in my 2010 Sports Technology Predictions post, and it’s great to see it getting used.

Cell phone manufactures can choose to incorporate the chipset into their phones, and the folks at ANT+ are expecting to see more and more phones including this capability – especially as new phones get introduced in the fall for the holiday season.

In the case of the HTC Legend, while the physical chip is present on the phone – the ANT+ capabilities aren’t enabled yet for us normal folks.  But I’ve been told that’s coming – just a matter of working out the details.  So for the Tour de France riders, a special software firmware update was applied to enable the  ANT+ data receiver.  Also, as an interesting aside, the phones that are put in the saddle bags for The Tour are actually set to be call-disabled, so they cannot be used as communication devices – to stay in compliance with certain rules around such devices.

Now all this hardware is great, but we still have to apply the one last key piece: The Software.  See, unlike answering a telephone call, there is no default program on your phone to answer ANT+ data streams.  So that had to be created from scratch.

The folks at Google have a concept called a 20% project, which is essentially where a given developer works on something in his spare time.  Eventually that project may end up becoming a full fledged project or product.  And that’s exactly what happened here.

Former Pro Cyclist and Olympian Dylan Casey now works for Google, and between him and a bunch of other sports freaks at Google, they put together an Android App called MyTracks.  MyTracks then evolved from an app like RunKeeper to one that also includes support for ANT+ accessories.

In the case of The Tour riders, this app is loaded on the phone and then run continuously during the stage.  It records the data stream from the ANT+ accessories via the Texas Instruments WiLink ANT+ enabled chip and in turn rebroadcasts that over the internet to Google servers hosting the MyTracks application.

It’s once on these servers that we finally get to the part allowing you to actually see the data.

There are actually a few different sites that pull data from the centralized servers.  First up is the MyTracks homepage for the Tour.  This shows riders along the left hand side, and allows you to individually select a given rider and see their progress: 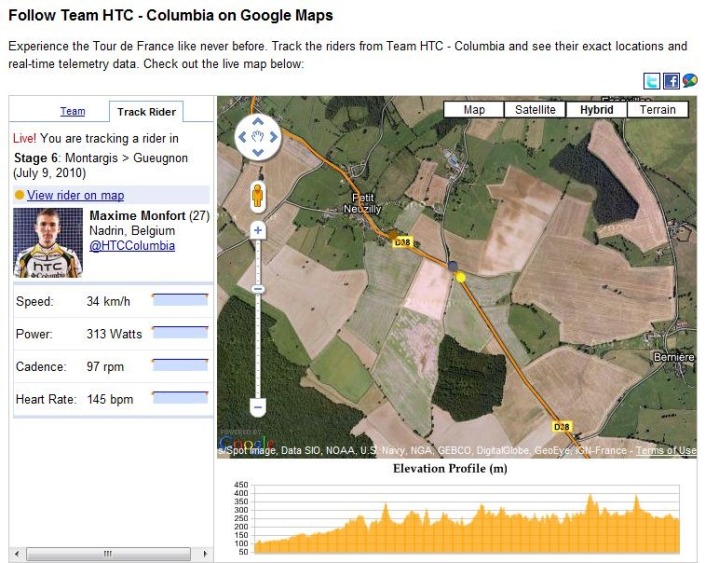 While the MyTracks site is good – I actually prefer SRM’s variant of the site, as it allows me to see multiple riders ANT+ data at once all on the same page. 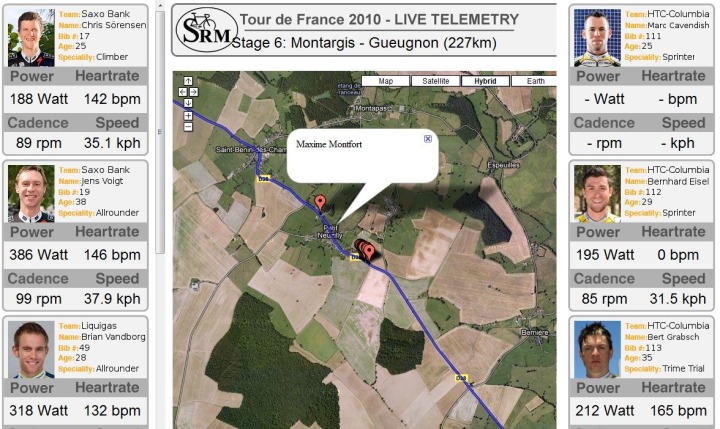 Of course, seeing ride data is cool and all – but being able to combine it with Live TV is even better.  In most cases you’ll just have a normal TV on in the background with your computer nearby.  In my case I use Windows Media Center to actually stream TV through my computer, so I can overlay the two side by side.

It’s when you do this, that you see how amazingly real-time the data is.  While there are certain latencies with both the data and the TV feed, all in we’re only talking about 5-10 seconds.  In fact, by time both data sets get there, it’s pretty much in sync. 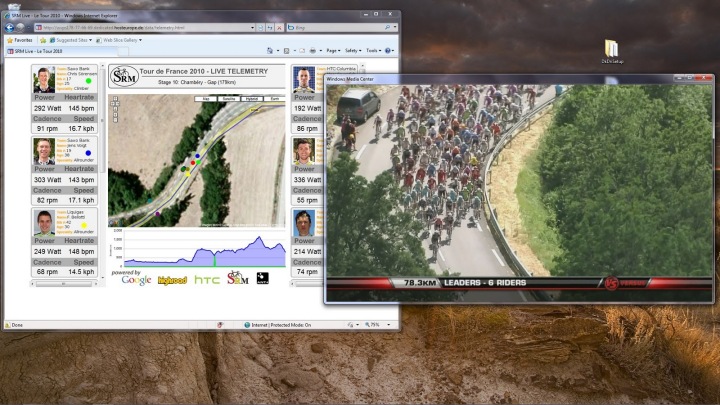 And here’s another snippet a bit later (click to expand).  Note the intersecting roadway to the left in the video, and the same roadway on the satellite image with the intersection. 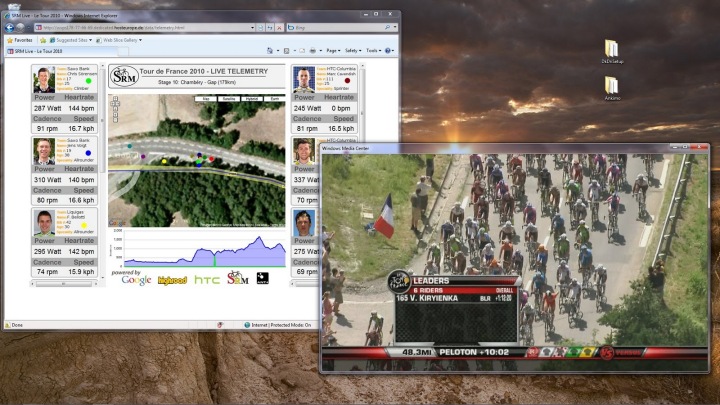 The Team and Riders:

Of course, the real question is what the Team riders think about it.  So I talked with Kristy Scrymgeour from Team HTC-Columbia and got the skinny about how they feel things are going.  I was actually somewhat surprised that “the riders are pretty enthusiastic about the project and where projects like this can take the sport in the future”.  In some ways I expected them to be hesitant to share data in real time with the whole world.  So it’s great to hear they’re open to it as well.

I was also curious if they were using this data within the team to potentially make race day decisions out on the course.  She noted that while today they aren’t streaming that data to the team cars quite yet, it’s something that’s on the radar to look at.

She said that the only challenges they see today with the system is the lack of cell coverage in some areas causing gaps in data.  But they said they are fine tuning the system as a whole and think they can solve some of those issues in the future.  It probably helps that there is also a dedicated support team from SRM there for the system, and Google was actually onsite for the first few stages as well to ensure things went smoothly.

Team HTC-Columbia though is still quite happy with how things are going though, and noted that “This is a project that we want to build on in the future.”

In my book – that’s good news for not only cycling, but also sports technology!

So next time you’re sitting there watching some live Tour coverage, pull up one of the websites above to see just how hard these guys are really working.  Enjoy!

And a special thanks to all the following folks for their time: Dylan Casey – Google (My Tracks Team), Kristy Scrymgeour – Team HTC-Columbia, Dallin Doney – ANT+, Ross Stirling – ANT+