The day before Knoxville Rev 3

I was going to make this all one post (Race Report and Pre-Race Stuff), but decided to split it apart.  It will be more epic that way…which…will go along with how the race went.

As I mentioned earlier in the week, a good friend of ours volunteered to fly us down to Knoxville, TN in his small plane.  Since we had tested the ability to get both bikes in the plane last week, we were pretty confident we’d be able to repeat it on Saturday morning around 9AM when we showed up at the airfield.  It’s a bit of a massive jigsaw puzzle. 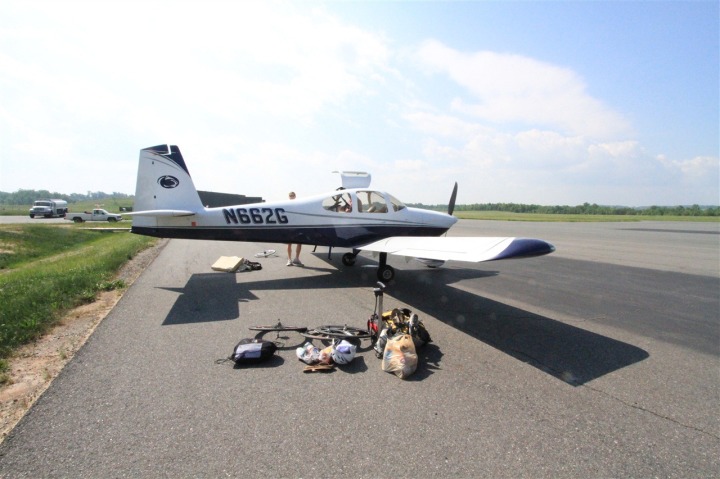 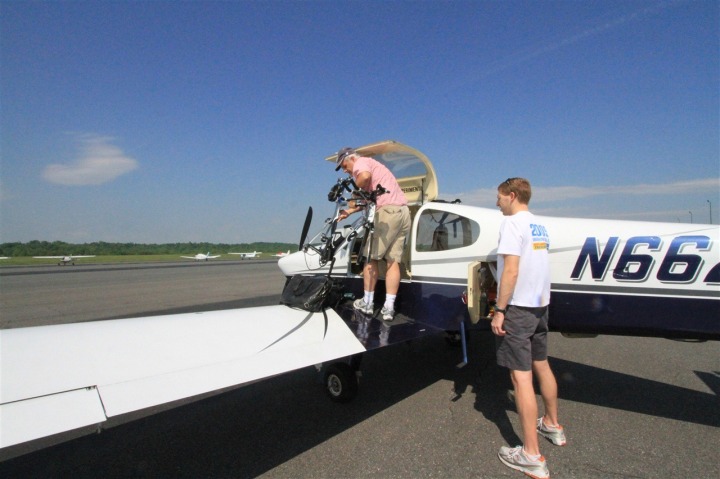 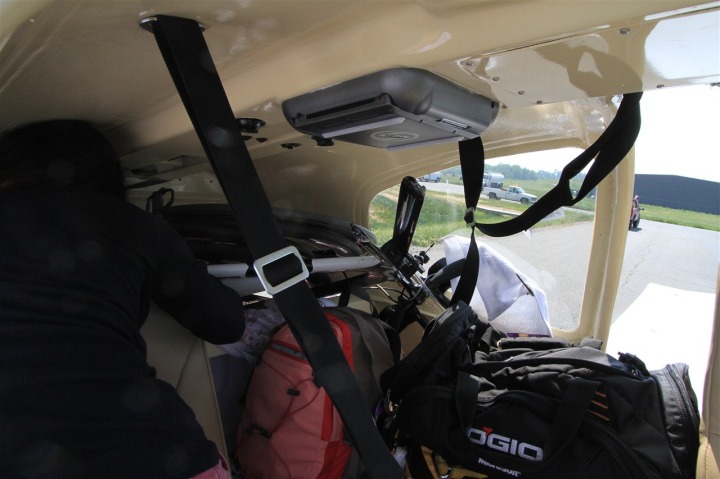 Once again, we were highly successful in getting not one, but two peoples full triathlon gear in a very very small space.  Now granted, that also took a bit of pre-planning.  No hefty multi-transition-bag configurations here.  With everything secured in the plane, we were soon airborne and climbing. 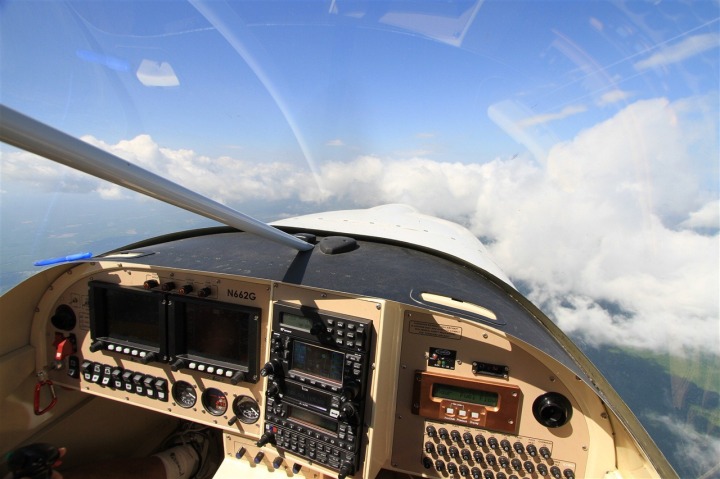 We’d end up at various altitudes for the flight down, between 9,000 and 11,000 feet.  We were up against an incredibly strong headwind for most of the flights, some 70kn right onto the nose.  So that made the flight considerably longer than we anticipated (though, coming back would be uber-quick).

And thus, Garmin…meet Garmin.  Some of the avionic equipment in the plane was also made by Garmin. 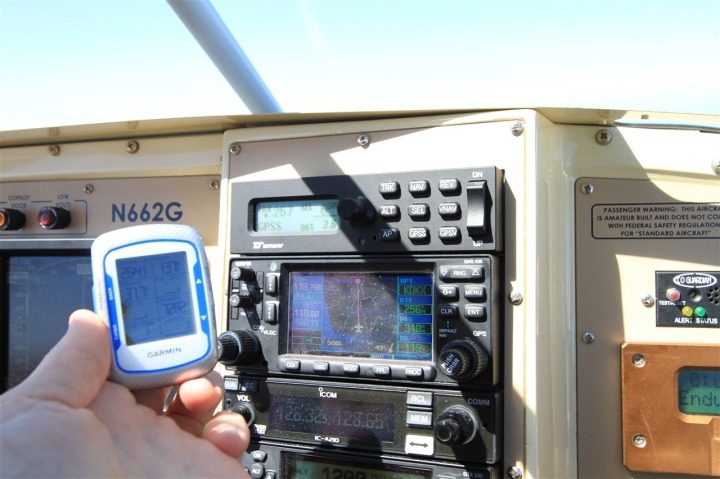 A number of hours later we started our descent down and approach into Knoxville Downtown airport. 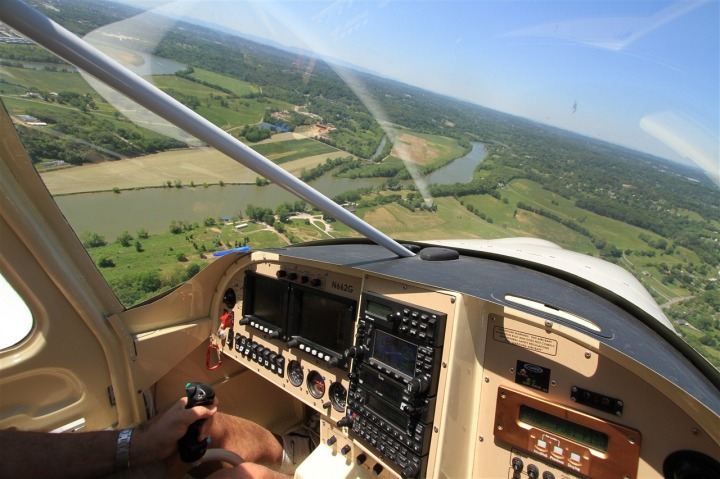 This airport is super-close in to downtown (about a mile from the swim course), and is only open to small planes (no commercial airliners). 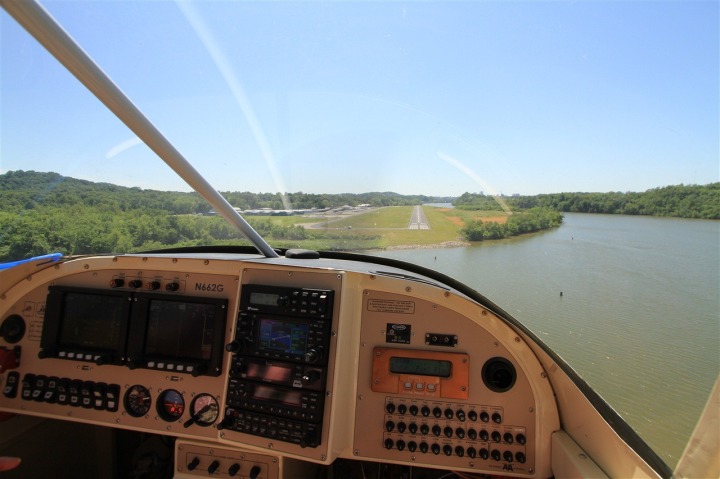 The river you see above is actually where we swam, just on the far side of the runway and around the corner. 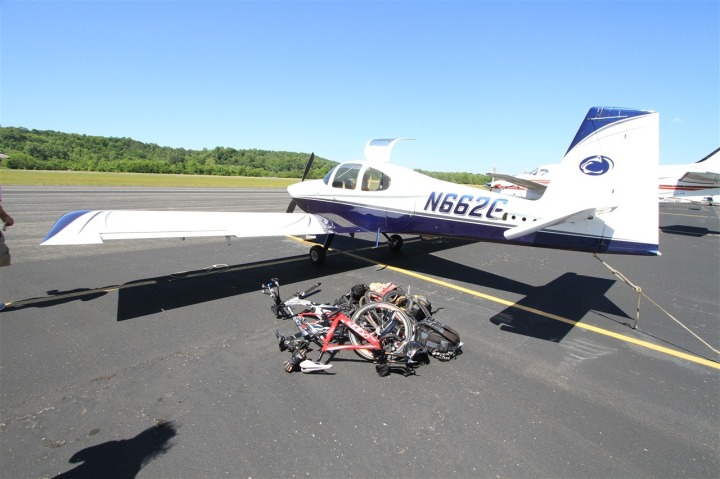 Small airports like this usually have ‘crew cars’ that pilots can use for a few hours for free…and this was no exception.  After getting everything unloaded we tossed it all into a crew van and headed over directly to the race site to check-in. 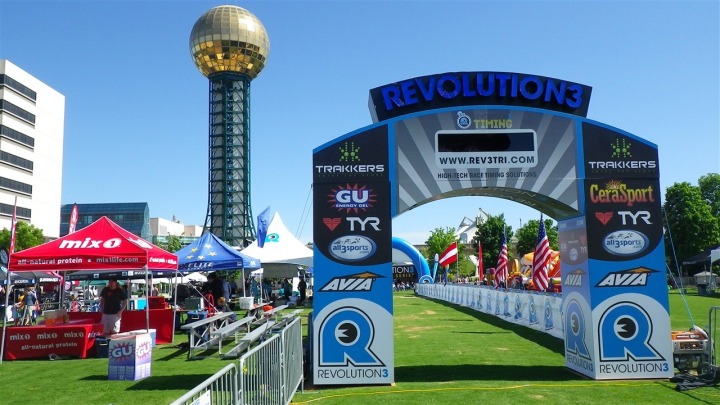 I was fairly impressed with the setup – it was on par with what you’d expect from an Ironman branded event.  Huge big screen TV’s, results tents and all sorts of goodness. 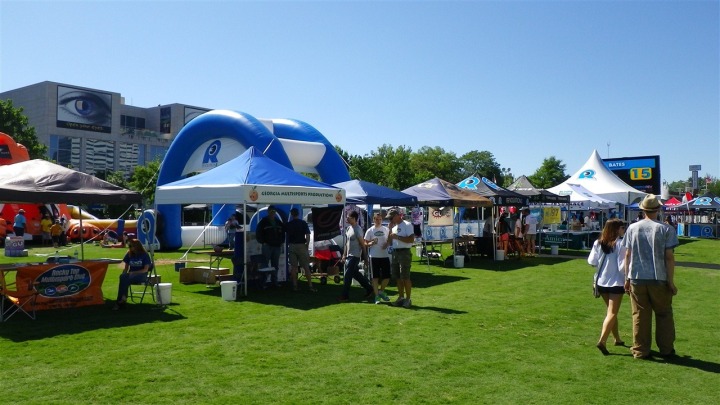 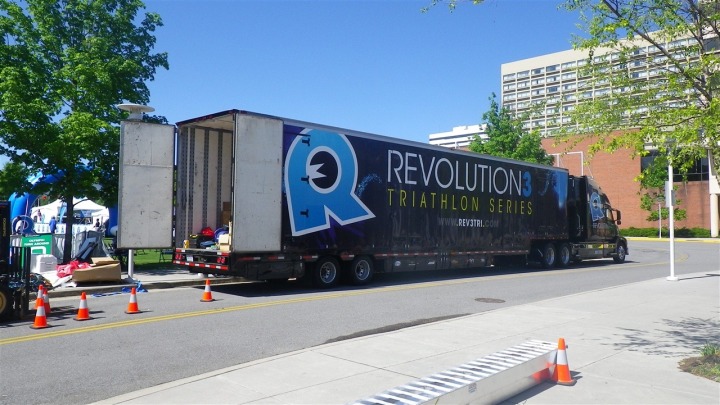 After picking up the packets we walked the 1/3rd of a mile or so down to the transition area near the river to rack our bikes: 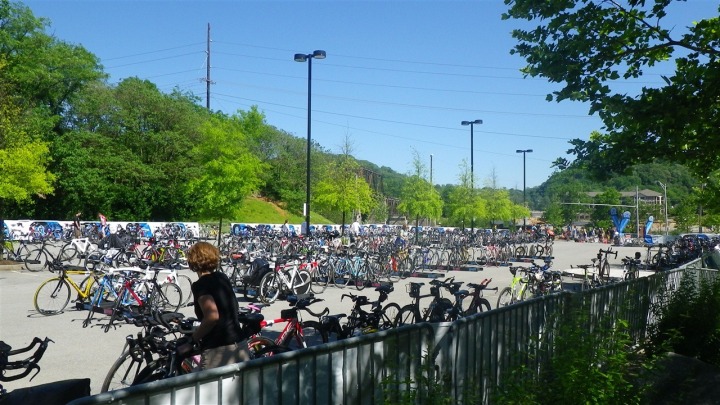 (The ‘normal people’ area above, and the Pro’s down below, complete with pictures and names and numbers) 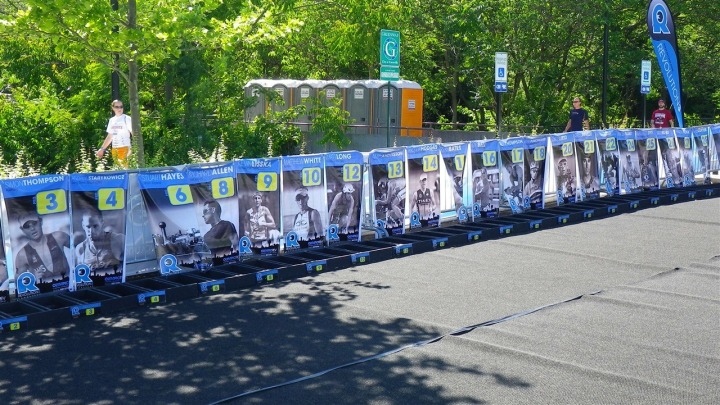 You’ll notice the bike rack systems are a little different than most races.  They instead use your back tire – similar to how pro racks are normally done for ITU races.  This system is sooo much better than a normal rack and it’s much quicker to grab your bike. 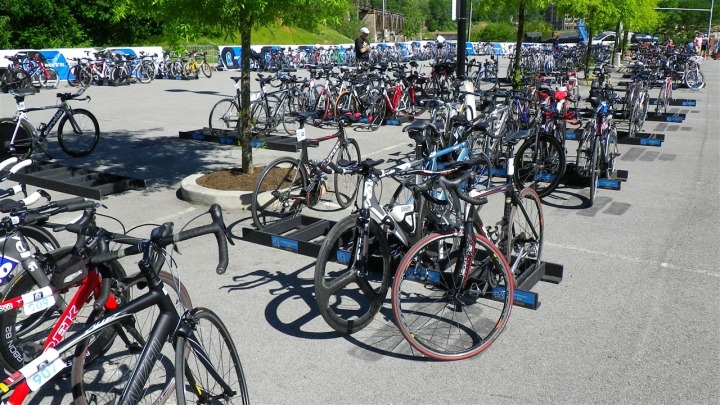 Adding to the coolness factor is that they had little laminated placards for every person, which were easily removable post race. 🙂 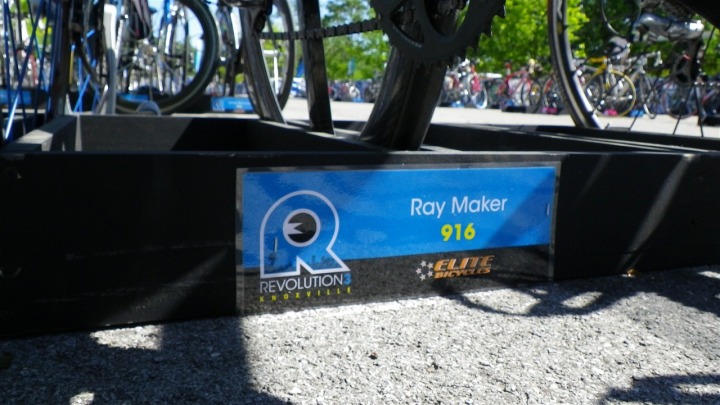 Speaking of things with your name on it…

When I opened my packet and took out my race number something caught my eye a bit. It was the division I was placed in – which was the “Elite Amateur” division.  I had e-mailed the RD (Race Director) a while back asking what the cutoff was, but pretty much left it at that.  I didn’t think I was actually listed in that division.

Turns out I was. 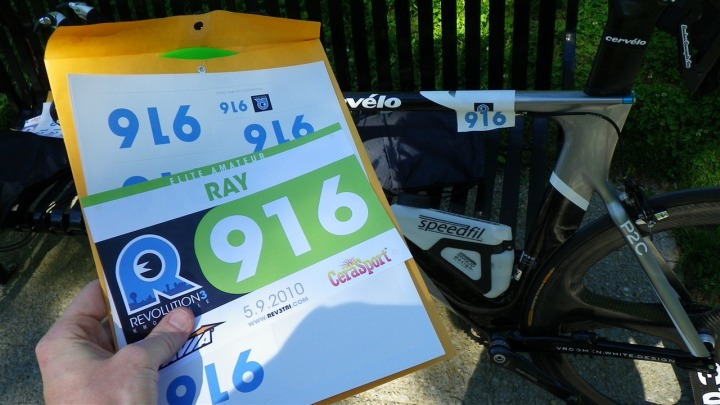 No worries though, for this race I wasn’t looking to grab any hardware, but rather just improve my times – primarily in the swim and run sports, with a bit of focus on seeing how recent bike position changes would affect my bike times as well.  Being in the elite division would force me to HTFU on the swim and hold on, so that would probably be good anyway.

With everything all set in transition it was time to head back to the hotel and get all the race morning stuff ready before some just chilling out and eventually bed.

I took out all the contents of the bag (lots of swag, and papers) and got it all laid out: 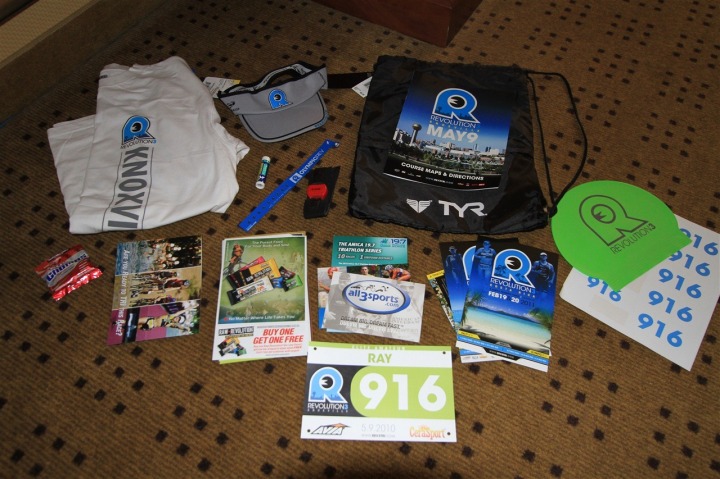 From there I took the critical pieces and got them together.  I always make my little Dim Sum Style Swim Cap – which includes my timing chip, swim cap and goggles tied around it.  You wouldn’t jump into the water without your goggles, and that forces you to have your swim cap, which in turn forces you to remember the timing chip inside.  The perfect system! 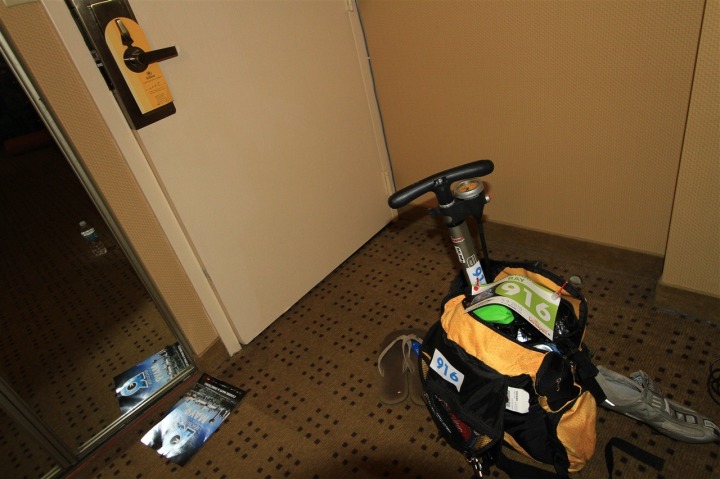 With that, everything was set by the door and ready to roll for the morning.