When you cook a fair bit, there tends to be occasional mishaps.  Some are minor, like forgetting to put in an ingredient, and some are more…umm..catastrophic…like nearly melting your BBQ and burning down your house.  This is the tale of the latter.

It was four years ago (April  2006) that I attempted to cook my first duck on the BBQ.  I was pretty excited about it.  I had just gotten the new fangled rotisserie attachment for my BBQ, which meant that I could spin things in circles until they were dizzy…and perfectly golden brown.  Second, after some initial success with something simple – a rotisserie chicken – I decided that duck seemed like a great next step.  After all, when you go to Chinatown you always see the duck’s rotisserating in the windows.  It can’t be that hard, right?

So I picked myself up a little duck that was more or less ready to go on the BBQ.  In many ways, it looks just like a slightly oblong chicken.  I got it all prepped on the big pokey thing (spear) and went ahead and turned on the grill to get everything heated up.

A short bit later I would get the pokey piece installed in the spinning drive motor and the duck was off to the races.  Figuring it was good to go, I went back inside and let it be for a bit.  Not very long, about 15 minutes or so.  I had expected the process would take at least an hour, so 15 minutes seemed like a logical checkpoint.

Around 15 minutes later some smoke alarms upstairs started to go off.  This wasn’t terribly uncommon as sometimes BBQ drippings would burn off and eventually trigger the very sensitive smoke alarms.  Nonetheless, I decided to go out and check out the situation.  It was as I rounded the corner onto the deck, this is what I saw: 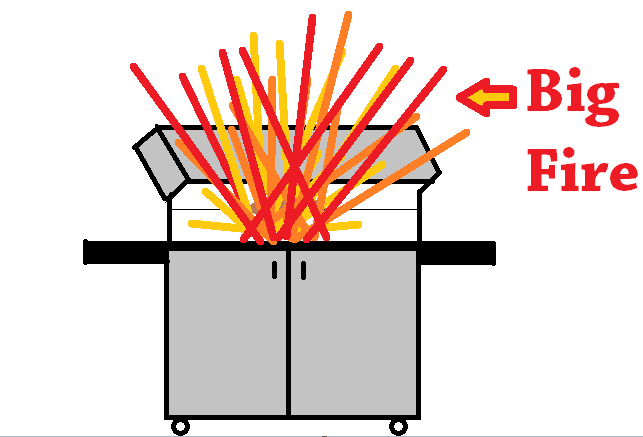 As I got closer and approached this massive flaming creation on my [wooden] deck, I noted the temperature gauge at the top of the BBQ had fully red-lined out.  Not good, as that was something on the order of 900*F.  I think you can split atoms at that temperature.  Maybe even launch a space shuttle.

Turns out that duck is an incredibly fatty/greasy little birdy.  And when cooked that fat departs said bird.  And heads straight down onto the burners.  When it does that it ignites.  Immediately following that the cycle repeats.  And gets bigger and bigger and bigger.  In effect, the bird became the fuel.

At this point I decided that shutting off the gas seemed like a valid way to go about solving the problem.  But, that didn’t exactly fix it.  Because, by this point the propane was a rather minor player in the fuel equation.  The duck was now center stage.  It was the new bio-propane.

Upon deciding that I didn’t really want a raging inferno on my deck, I contemplated my options.  I could utilize the fire extinguisher – but that has a whole bunch of horrible associated with it.  thus logically, the only other option was water.  But, I knew that water and grease fires don’t exact mix.

Not that this would stop me.

For my first attempt, I’d go with just tossing a glass of water under the hood real quick and then closing it.   How much could possibly go wrong with a cup of water anyway?  This resulted in a MASSIVE smoke cloud, fizzing, and more smoke.  Sorta like the Space Shuttle – only without going to space.

But, nothing exploded – neither me, the duck, the BBQ, or my deck.  Thus result = success.

I rinsed and repeated this process a number of times until I finally had a BBQ without a fireball in it.  And when I was done, I was left with this: 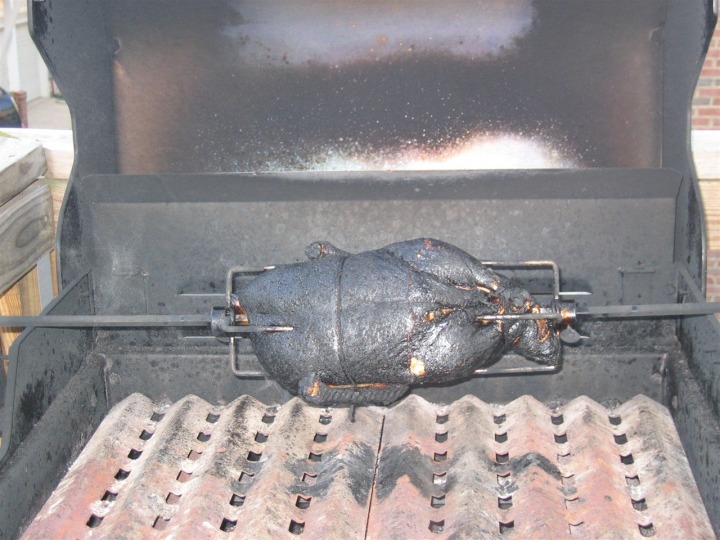 Yes…my pristine duck was not a charred ball of…well…char. 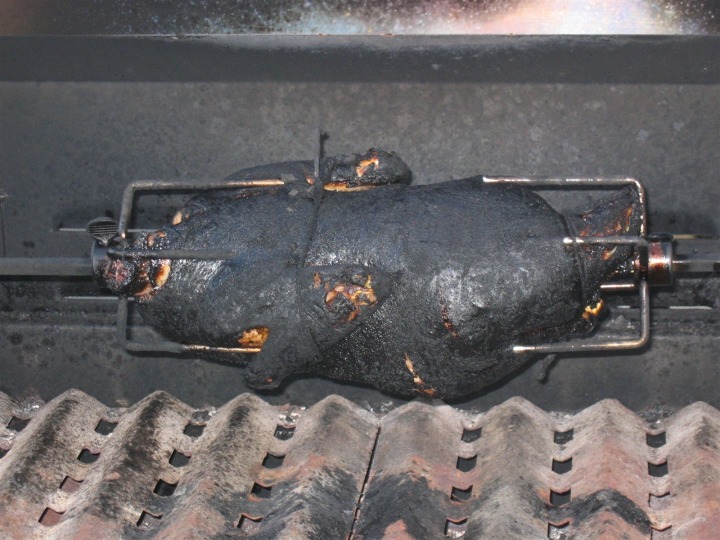 Needless to say…there was no duck that night.

After much success with multiple turkeys, a number of chickens, and even a squab – I was ready to tackle the duck again…nearly half a decade later.

So I picked one up earlier this week for dinner and got it all prepared. 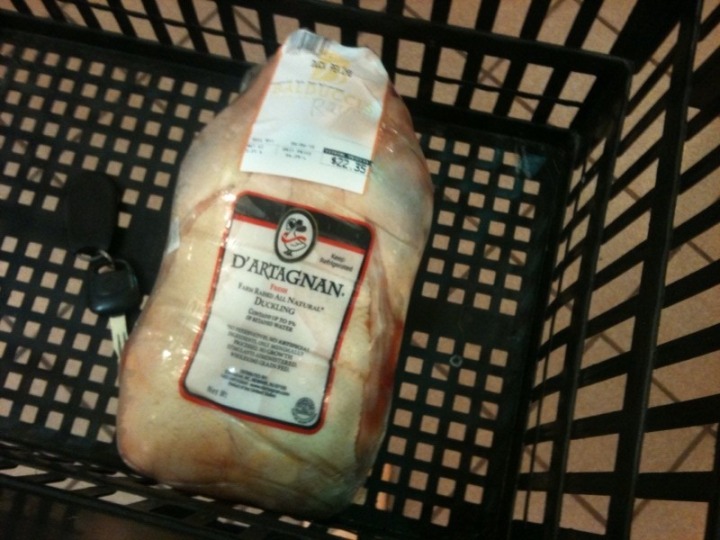 Nothing fancy – just plain duck going round and round on the rotisserie.  Except there was one minor (but very important) change from the previous time.  A new BBQ from last summer.  This BBQ has a back infrared burner BEHIND the duck, which means that as grease drips down, it doesn’t go into the flames below (as those burners are off).  Yes, a drip-pan might accomplish the same thing, but there many ways that can go wrong also (been there with other meats…).  So really, this plan was pretty much bulletproof…or boomproof. 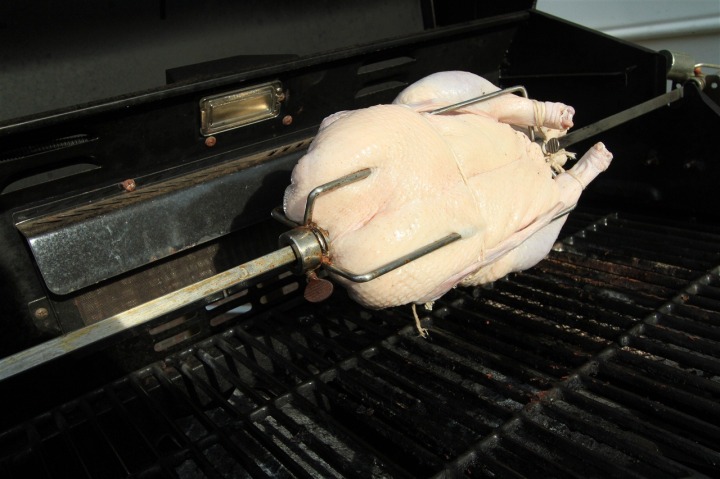 After about 15-20 minutes I was pleased that I made it much further than last time without any unexpected firework productions on my deck.  So much so that I was content with leaving it be as I jumped on the trainer and did my workout. 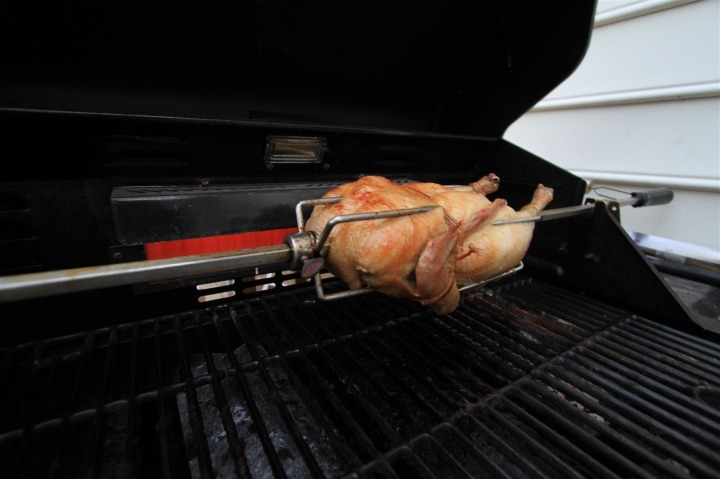 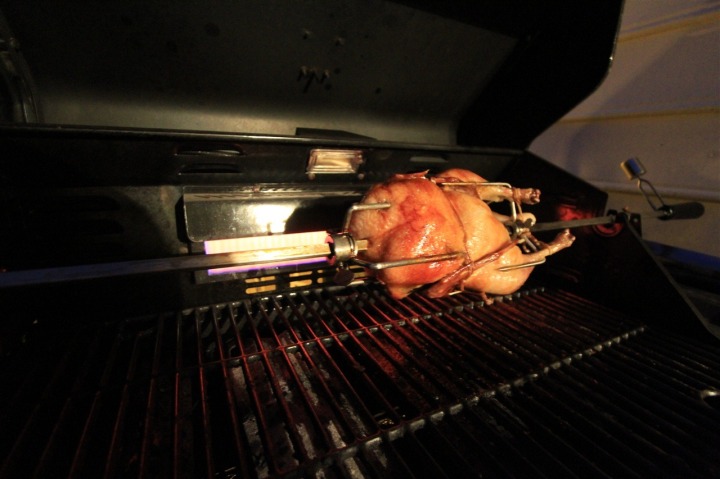 Shortly after that, Mr. Duck came off the grill.  The Girl added the little white drumstick tops…just cause.  She also went about carving up the duck.  She’s really good at that meat carving thing. 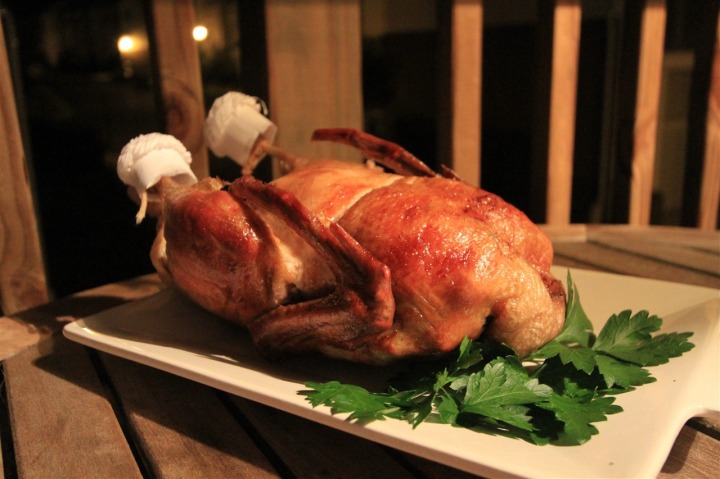 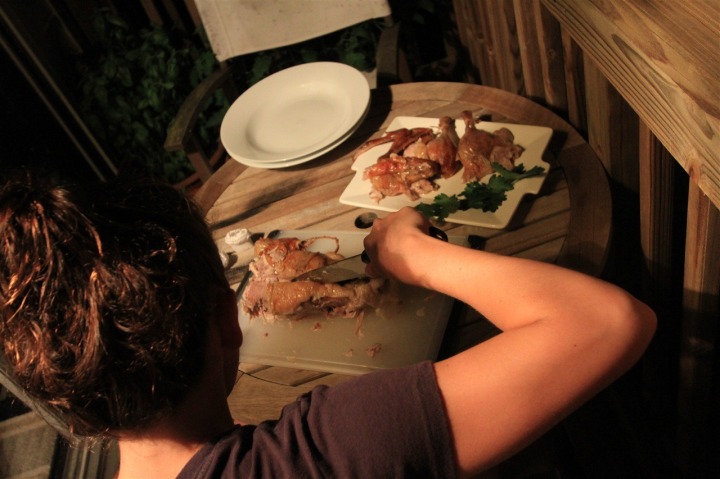 And a short bit later after whipping up some fresh pesto sauce using basil off my not-on-fire-deck, I could declare the bird dinner a success! 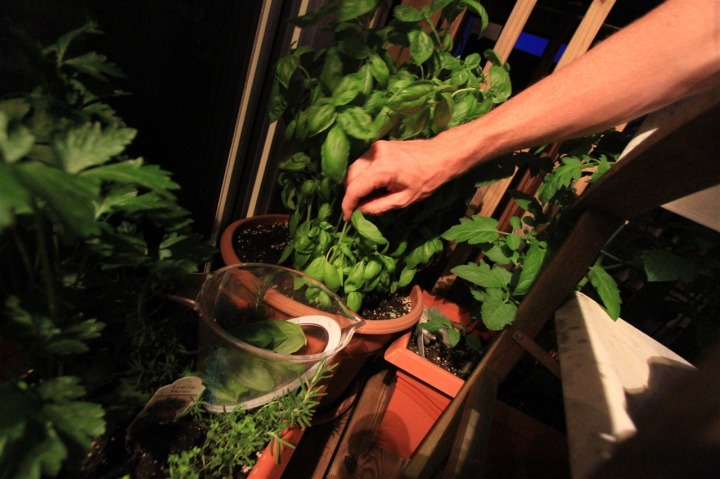 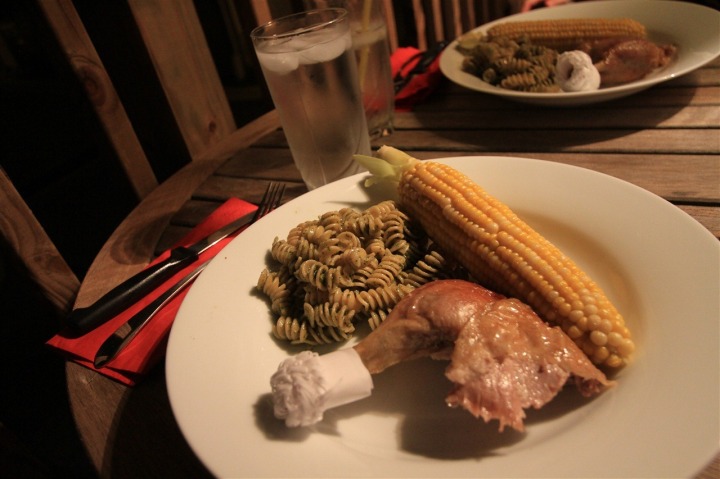 Enjoy your weekend…and don’t blow up any ducks!