As I had mentioned on Sunday, I started my Thanksgiving dinner preparations a bit earlier in the week, with pumpkin pie.  But, those two pies didn’t exactly last very long around these parts – and certainly not until Thursday. 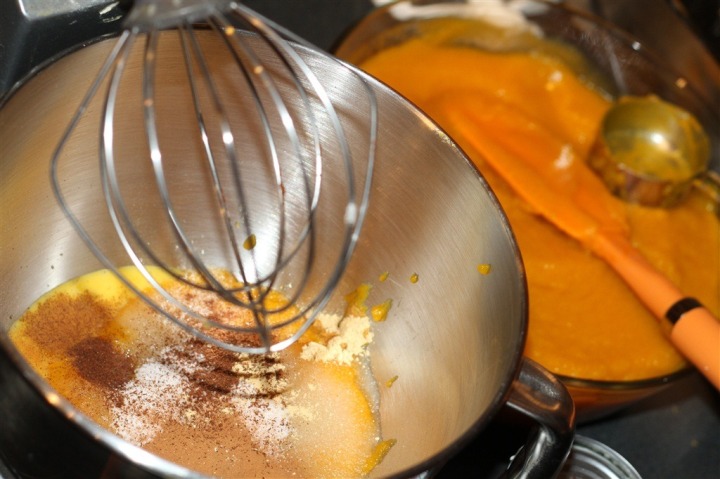 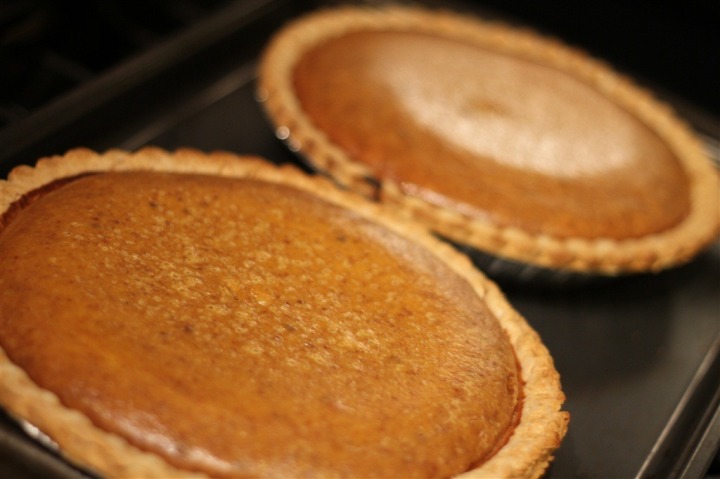 So I ate made two more.

Wednesday afternoon/night brought a flurry of activity related to the Big Day.  Around lunch time Wednesday I prepared the 20 pound Turkey in the brine for it’s 20 hour bath.  And then I and The Girl spent the rest of the day either grocery shopping, cleaning, or cooking.  Each of us individually hit up 5 grocery stores for various things.  Of course, no massive cooking day would be complete without some serious Excel action. 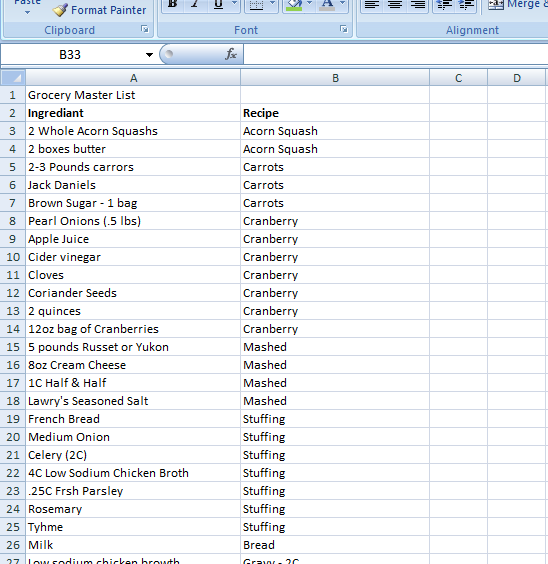 Though, the kitchen ended up being a massive game of chess that night, finding spots to move stuff around and still get most of the place settings out there while allowing The Girl enough room to create her creations. 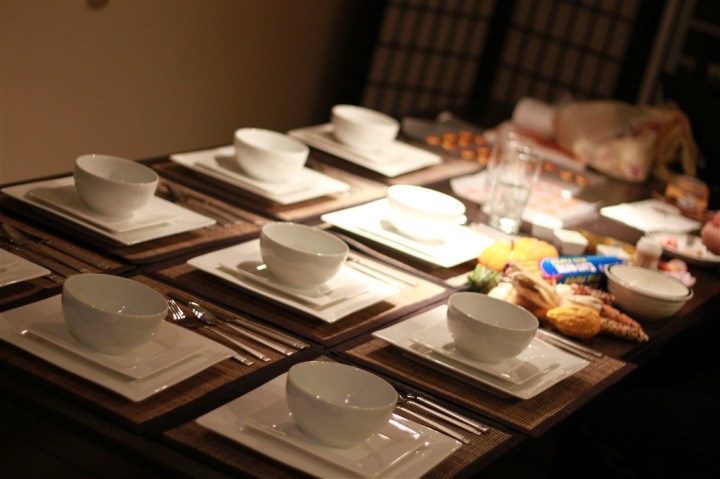 I also setup two spare side tables – one with all the dishware to be used, and another for all the raw non-refrigerated ingredients.  Here’s the food table.. 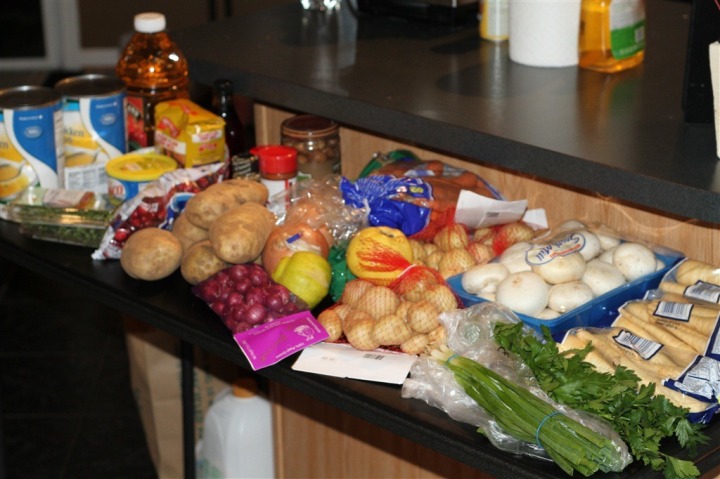 I started cooking and made a wide assortment of things, and the Girl worked on the beginnings of her Turkey Cupcakes (as well as the soup).  I also got the list of recipes and timings all sorted out as well, though without quite the amount of precision as last year.  Last year I had nailed out the exact in/out points for all the dishes into the oven. 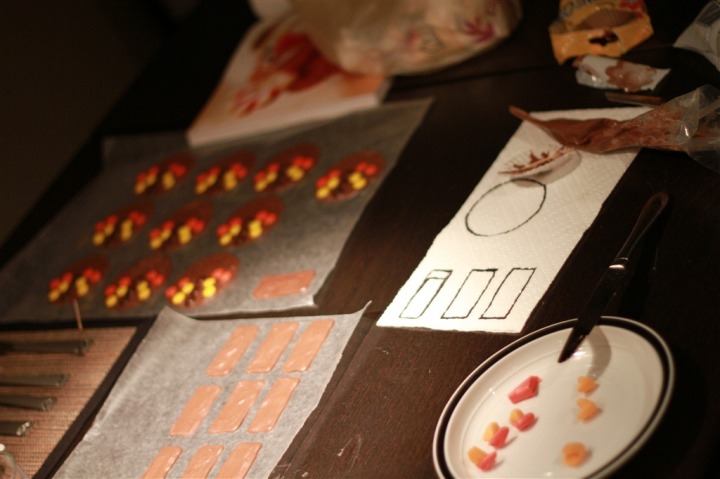 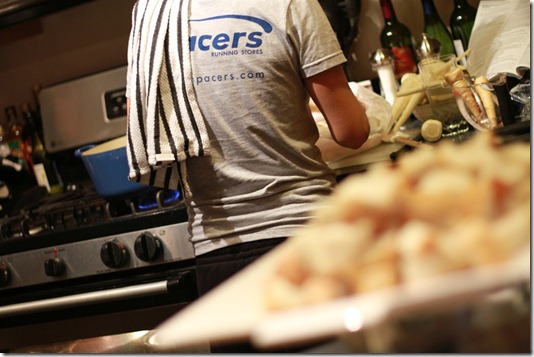 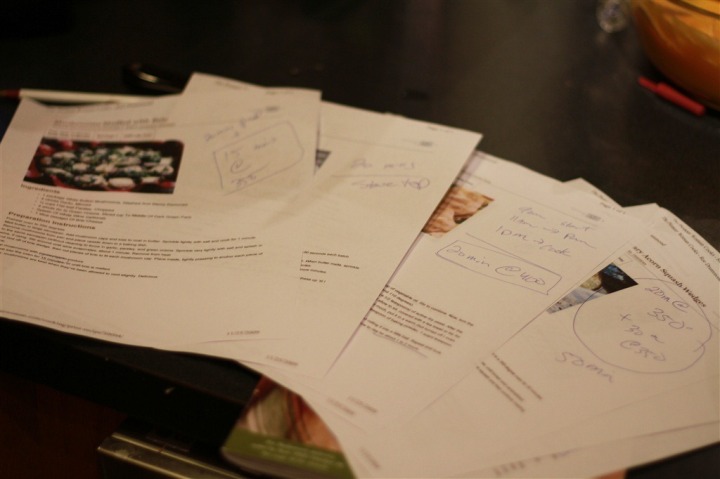 Fast forward less than a handful of hours later to Thursday morning, and I find myself at the start line of the Alexandria Turkey Trot.  This is a local 5-mile flat course affair that attracts some fairly fast runners…and Turkey’s. 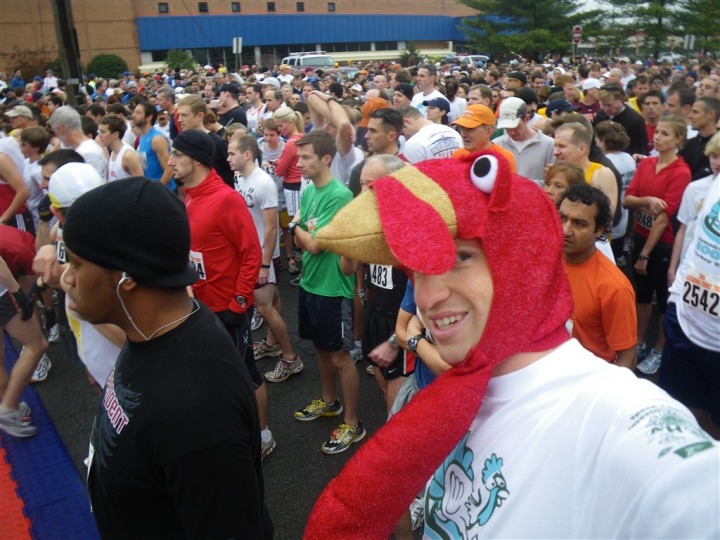 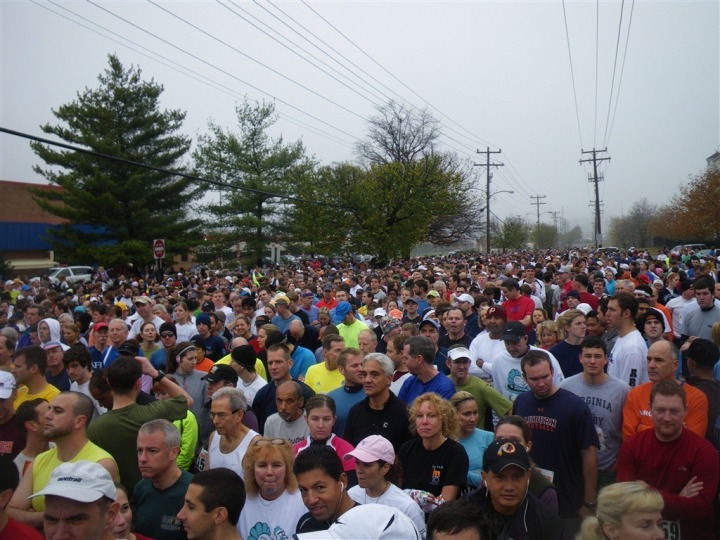 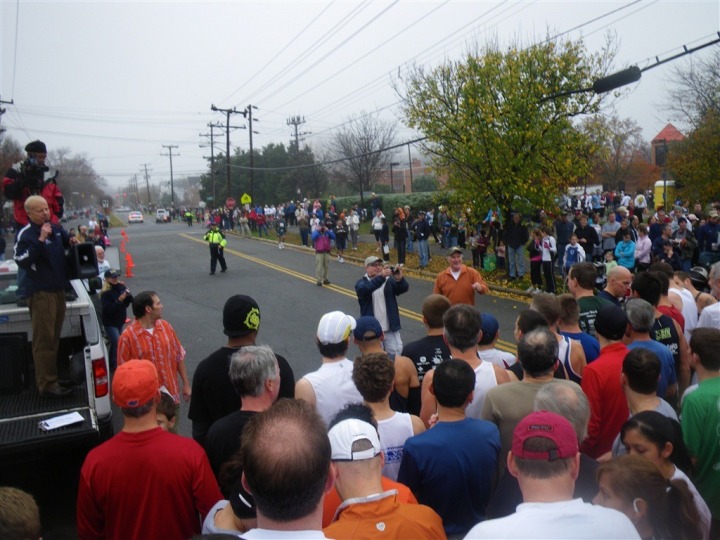 (Some of you may be new to the blog since last year – but that be my Turkey Costume, which I’ve worn now on a few occasions.  And of course, it will be worn every year for Thanksgiving Turkey Trots.)

Anyway, I got to the business of the day – which was helping to pace The Girl.  Though, she ditched me the first quarter of a mile or so and I had to play catch-up, but then we settled into a rather nice mid-6’s pace.  Clearly the ‘Leave no Turkey Behind’ act wasn’t in effect. 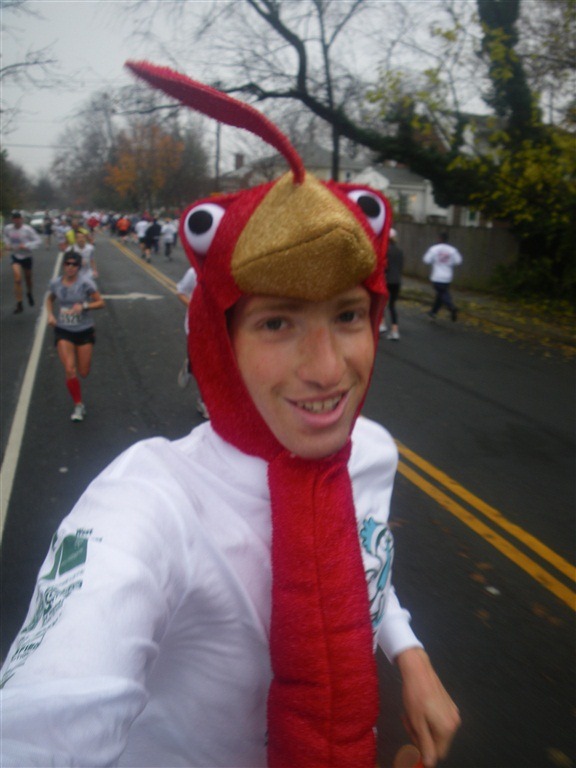 Of course, it probably would have been nicer had I followed any normal pre-race methodology – as just going through my little checklist I see the following:

So…this race turned out to be a bit of a comedy from a well run race standpoint – but then again, that might have been the case no matter what when you’re wearing a turkey costume.

Like last year – everyone loved the costume out on the course, especially the kids.  Lots of fun!

Around the 3.3 mile marker I was challenged to throw-down a bit…so I did.  And it hurt.  See the below – that red line – that’s my HR, note the massive spike at mile 3.3isH?

(The other massive spike at mile .5ish is just from my HR strap not being wet because I had no warm-up, so i just licked it and the problem went away)

So I threw down…and my HR flew up.  Pretty impressive actually.  The funny thing here really is noting how high my HR was even for the entire race – once again proving how critical the 7 items I noted above are in a good race.  Normally a mid-low 6’s pace would put me in the 160-165bpm category – not the 175-180 category.  And the 192bpm that I hit?  Well I never do that…really ever.  I found the little ‘top paces’ chart on Training Peaks kinda fun.  It shows you your top pace for each chunk of time (1 minute, 5 minute, etc…). 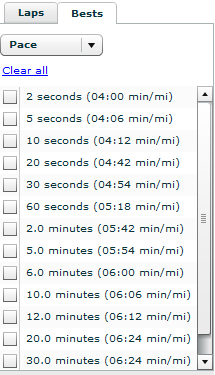 Post race I caught up with Lindsay and Carl (a local who also follows the blog). 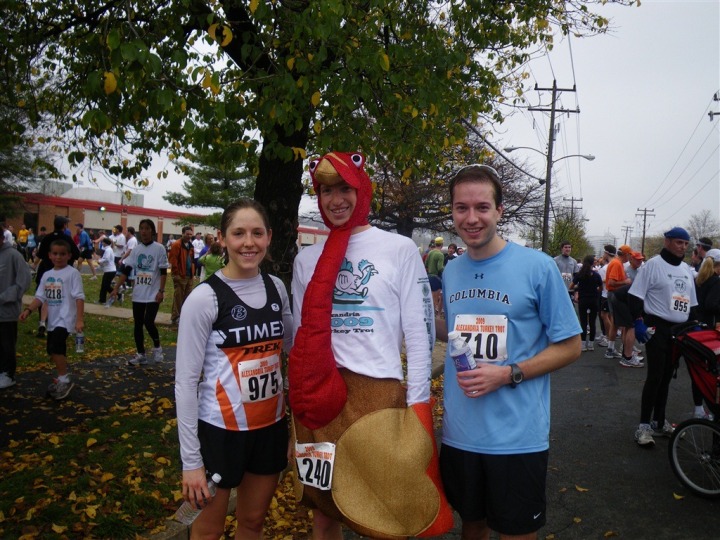 And then I picked up some free chocolate milk.  Woohoo!  (no, not like the drink, but rather as expressing excitement). 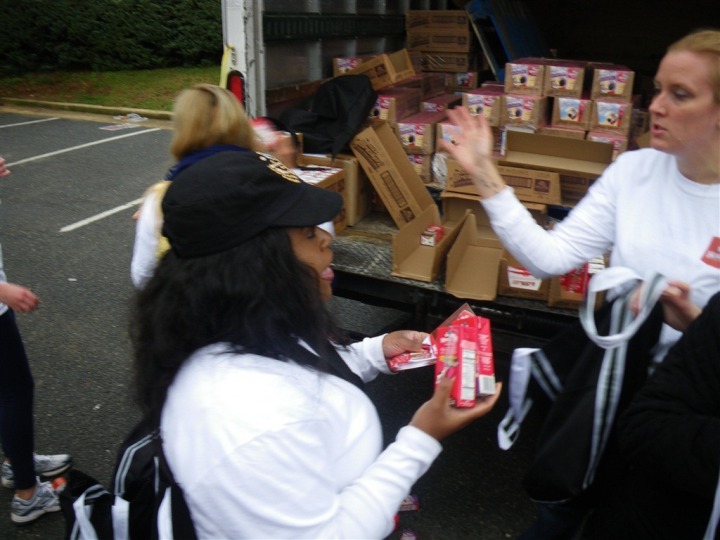 And then I drove home to work on the Turkey.  The Girl thought this was entertaining and snapped a few pictures. 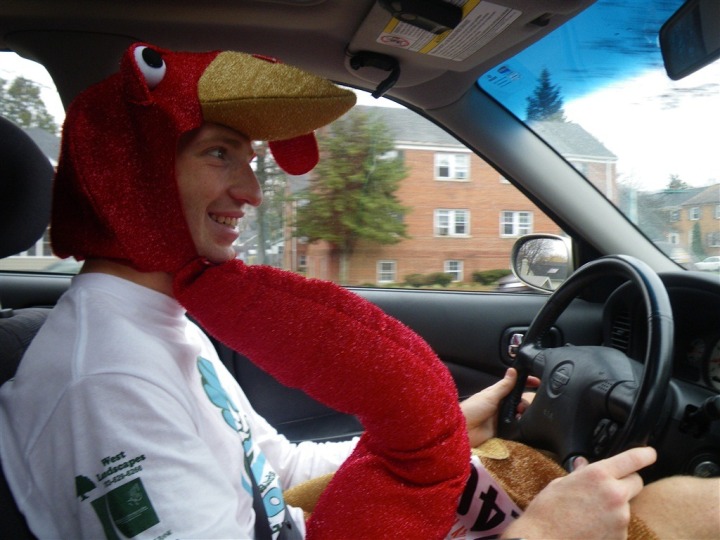 Once I got home it was time to swing into gear and get all sorts of cooking done.  Thankfully, though a bunch of friends were coming over – they were also helpers to preparation. 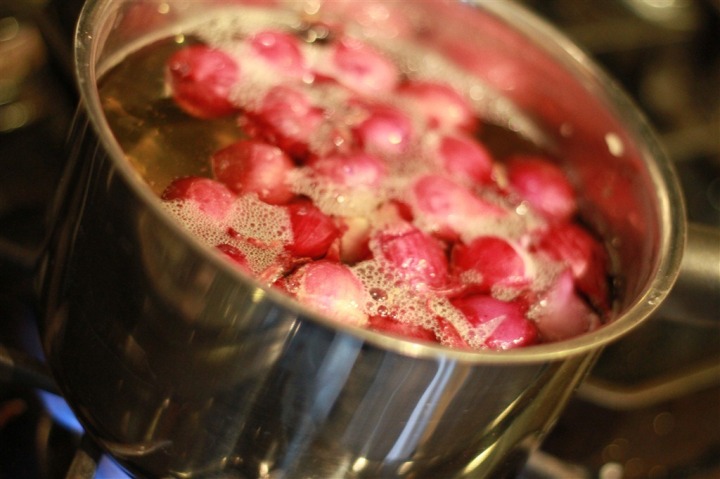 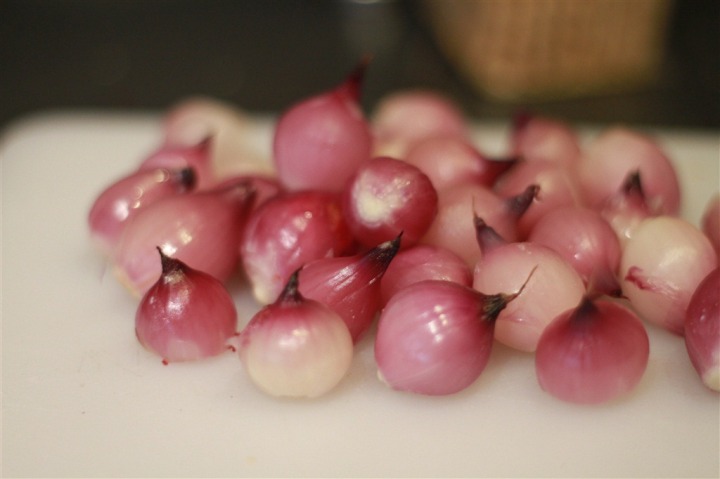 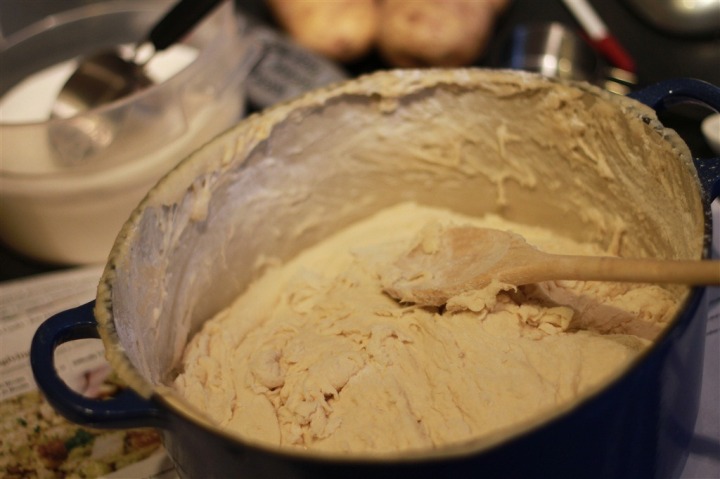 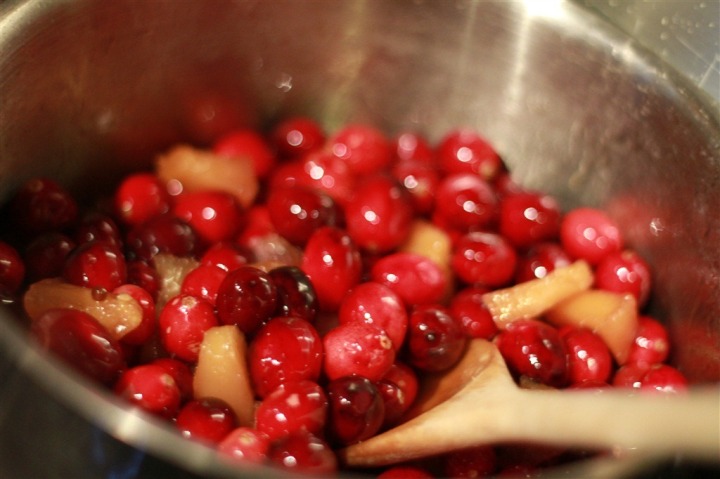 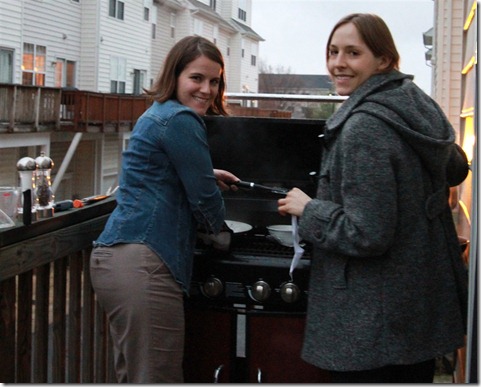 Above is Lindsay and Sonia, they got relegated to the BBQ side burner to do the Jack Daniels Carrots.  Unfortunately at this point all four burners inside the house were taken up – so they got kicked outside onto the deck. Sonia runs the Pacers Fun Runs – which I partake in.  You should too, because that’s where all the cool kids are.

Pat’s working on the Stuffing, while others get down to the business of cleaning and cooking.  Meanwhile, the kitchen looks as though it’s exploded. 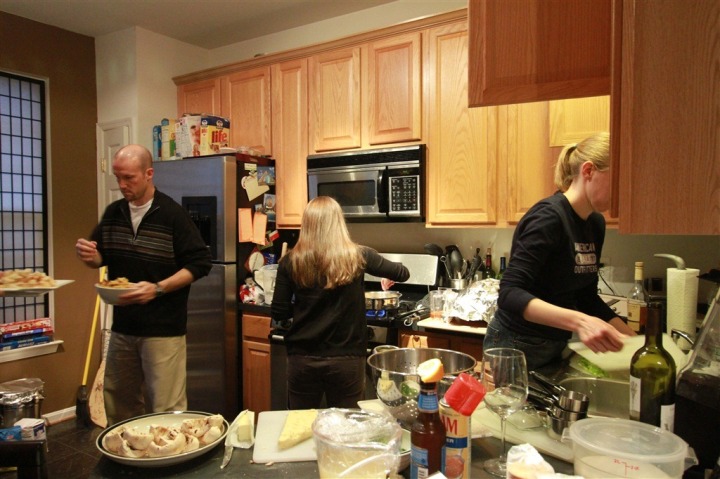 Meanwhile, in the midst of all sorts of crazy cooking – The Bird –decides it’s done and out it onto the cutting board it goes.  It would rest a while before finally becoming dinner. 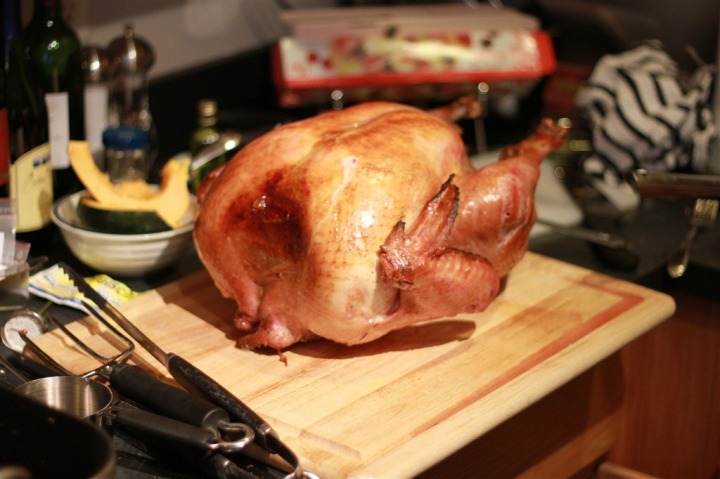 Speaking of Birds – The Girl knocked out some damn impressive turkey cupcakes – one for each guest. 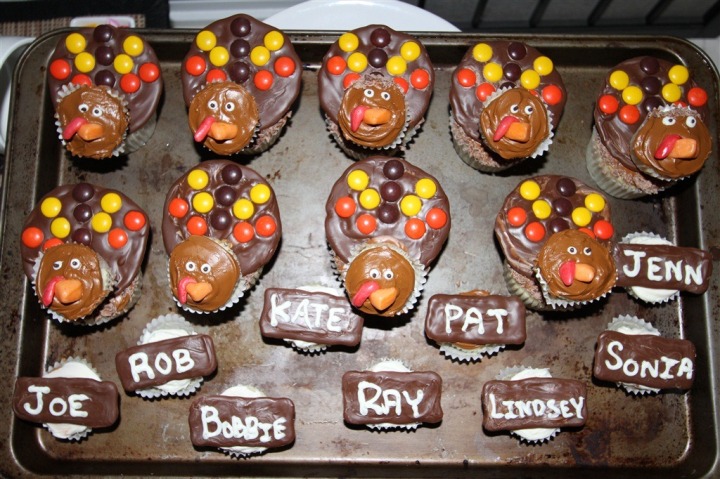 The cupcakes were used as name/place settings on the table. You can see Lindsay’s below. 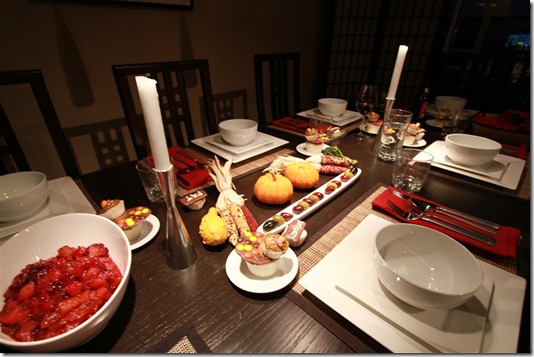 Though, somehow Lindsay’s head kept on falling off… 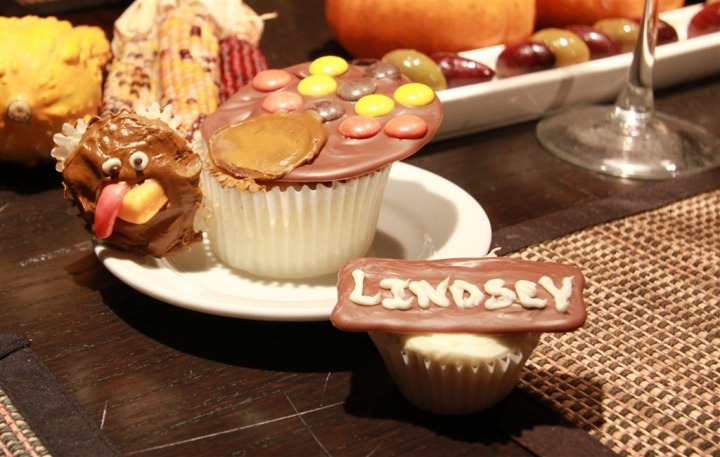 Anyway, soon it was time to eat! 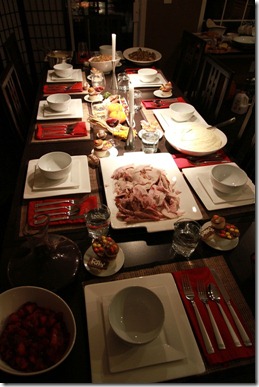 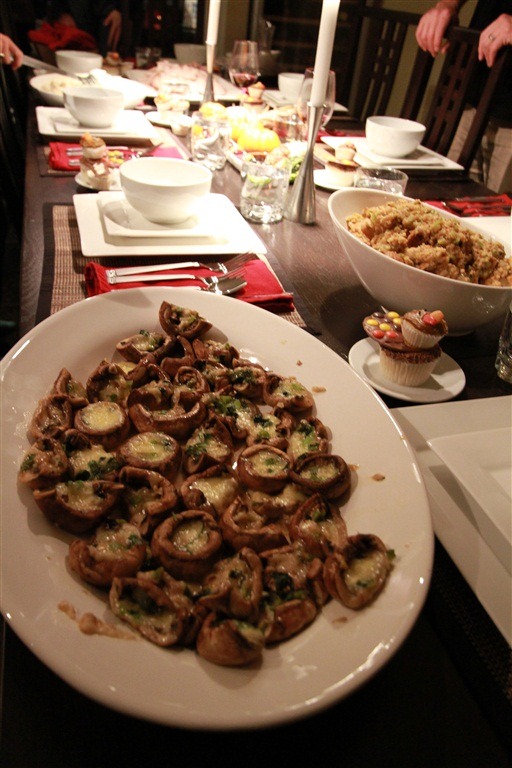 In case your curious – here’s the rundown of the Dinner Menu – well, at least the main/dessert courses anyway:

So with that, another awesome dinner with friends…and a lot of very very full belly’s. 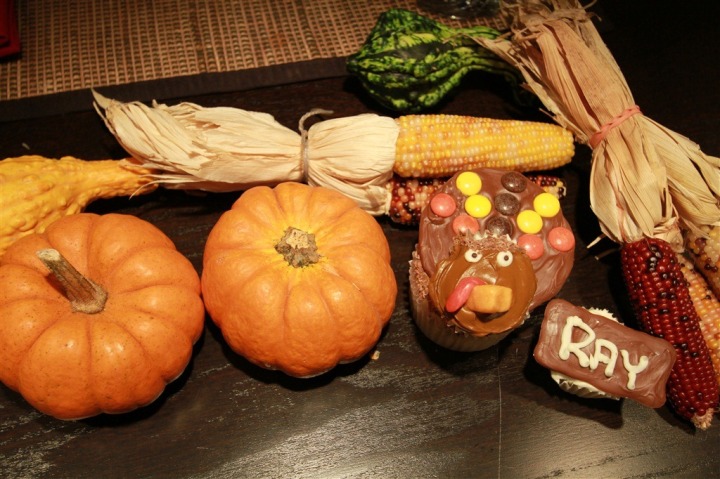