It’s finally the end of the week, and I’ve got a bunch of little tidbits from races schedule updates to technology stuff to toss out into the wind, so without too much more babbling, let’s get on with it.

Schedules:
As you may have remembered from way back in January (can you believe it’s April already?!?), I still had some TBD races with respect to the spring.  Well, over the past few weeks I’ve carved in stone some my schedule through at least the summer:

May – I hadn’t quite decided what race to do in May, but I decided to do the Rev3 Olympic Distance Triathlon down in Knoxville, TN.  Should be a good time, as the race series is looking like it’s going to be a great alternative to the WTC/NAS races out there.  Very much looking forward to it!

June – In mid-June I’ll be taking on a slightly modified Olympic distance race down in the Virginia Beach area (about 3 hours south of DC) – the Old Point Tidewater Triathlon.  Should be a nice course that’s a lot of fun!

Technology:
A whole bunch of endurance sports related sites completed updates over the past week or so – most probably trying to hit the magical Q1 cutoff for CY2010.  So, let’s get into a quick site by site overview:

Training Peaks:
The folks from TP added a slew of little additions, primarily focused on making your day to day log entry easier.  As someone who uses Training Peaks multiple times a day to track all my workouts, many of these tidbits are much appreciated – especially the ability to quickly change workout type, I tend to enter the wrong time quite a bit and the old system had some under the cover repercussions for doing that. 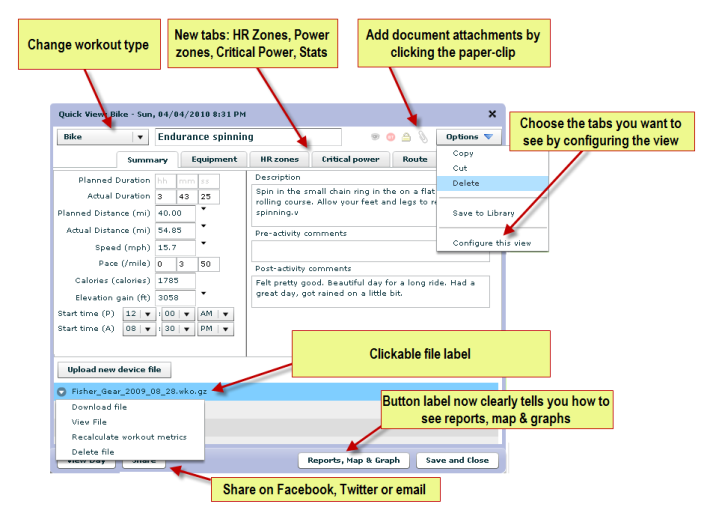 You can get their huge list of details write-up here.

Garmin Connect:
The folks from Garmin pushed out a previously scheduled update to Garmin Connect on Wednesday, introducing a bunch of features that focus primarily on allowing you to better analyze your data.  This is pretty much the last significant update your going to see for a while.  But, they packed a ton of nice features in here. They include: 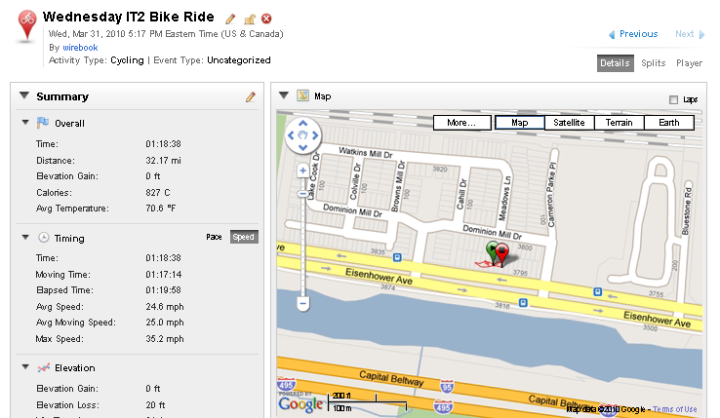 One neat little item they added was widget code to be able to do stuff like the below embedded interactive chart (you’ll probably have to click to my main page to view):

You can get their full feature update list here.

Speaking of Garmin, if you have an Edge 500 – they released a new firmware update on Wednesday (2.30), which fixes a few things and does some restructuring of the memory space – hopefully in an attempt to alleviate some of the freezing issues folks (including me) have been seeing recently.  So far for me, it’s working quite well for me.  You can grab that update here.

RunKeeper:
I haven’t talked much about RunKeeper to date, but they have a pretty product cool product for iPhone folks.  I wanted to specifically mention one new feature they added, which is completely kick-ass – Live Route Watching.  Basically, the ability to broadcast your workout, in real time – with real time location tracking on  map.  Just watch their nifty video, below:

I’ve always said that location based services combined with athletics is the future of all of the fitness devices we use today – it’s just a matter of who does it first…and who does it correctly.  Today the field is limited to RunKeeper, Spot (my review here) and GPSTrakkers, though – in my mind they are all currently missing the key data elements to make it awesome – your sensor data (heart rate, cadence, power, etc..) [Update: Trakkers does transmit ANT+ data].  You get those integrated into the mix, and bingo – an easy way for coaches to virtually follow along on that 6 hour Ironman training ride (ignoring iPhone battery life for a second…).  RunKeeper is the closest at this point, they just need ANT+ dongle integration.  Folks like PedalBrain would be best positioned to nail this when they release later this spring (as an aside, I’m been in contact with them and I’ll have full reviews of their stuff as we get closer).

This is pretty cool.  And thus far, in using the scale over the last week, I’ve been blown away by how cool it is.  They’ve really paid attention to the details, the little tiny features that make the whole darn thing so nice and seamless.  Also, from talking to Aaron (founder at Sport Tracks), the team at Withings is super quick and efficient about onboarding of new applications to integrate with (such as Sport Tracks and the previously mentioned RunKeeper).

Tanita Software Update:
If you have a Tanita BC-1000 scale, they’ve released a new version of their Healthy Edge software, which…well…doesn’t do a whole lot.  But…

…more importantly (and interestingly), the Tanita folks tweeted both a few weeks ago, and again mid-week that they’ll be publishing out an iPhone app and ANT+WiFi connector, which I think will help to bring them into the fold a bit more compared to Withings.  That’s all going to be happening in April.

As for the Healthy Edge update, you can grab that here.

Ok, that’s all I got – time to get out and enjoy the weekend (and the Cherry Blossoms)!