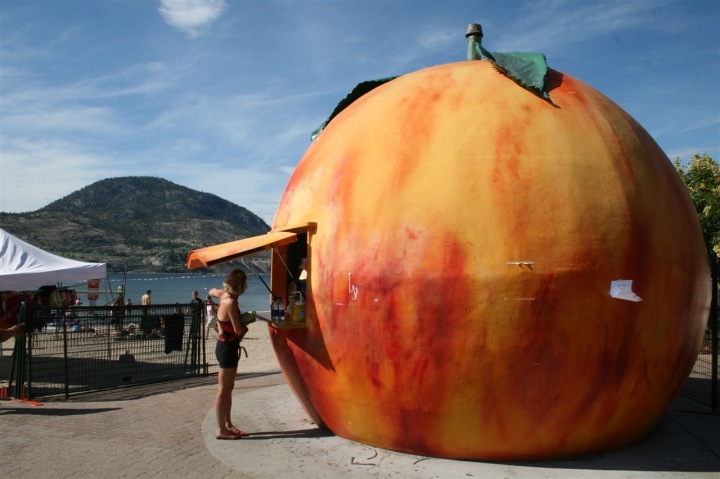 But before I see the peach many times tomorrow, let’s recap today…

First up was another 20-25 minute or so swim in the nice chilly waters of the lake. 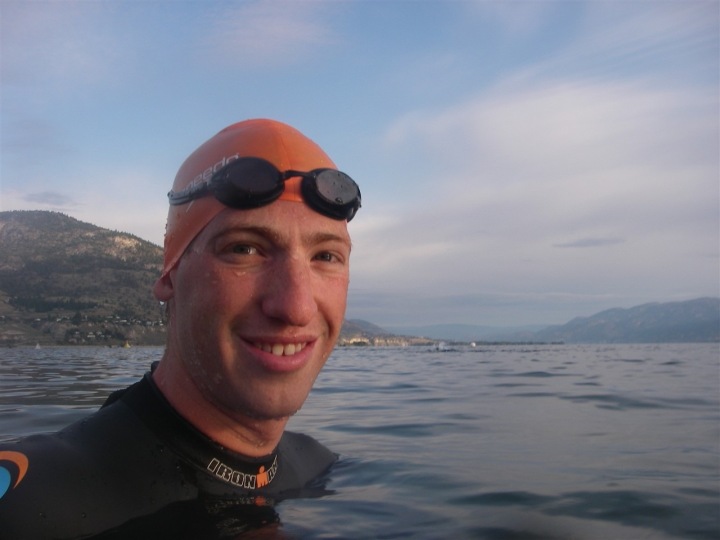 It seems though that this swim might have killed my little underwater camera.  Not sure why, but it’s currently on life support.  If it dies, it did it’s duty for two strong years – so I’d accept that it had a rough life.  But as of later this afternoon, it seems to be happy again.  We’ll see.

After another short 25 minute semi-tempo run I grabbed breakfast with some friends and then headed back to the hotel.

A short shower later, and I was back in line again to go through the registration tent – for the second day in a row.  This time though, it would be to register for Ironman Canada 2009 (next August 30th).  Athletes are allowed to register the day before, and everyone else on Monday.  I don’t actually have to commit until Sept 8th though.  Either way, much better than camping out overnight like last year. 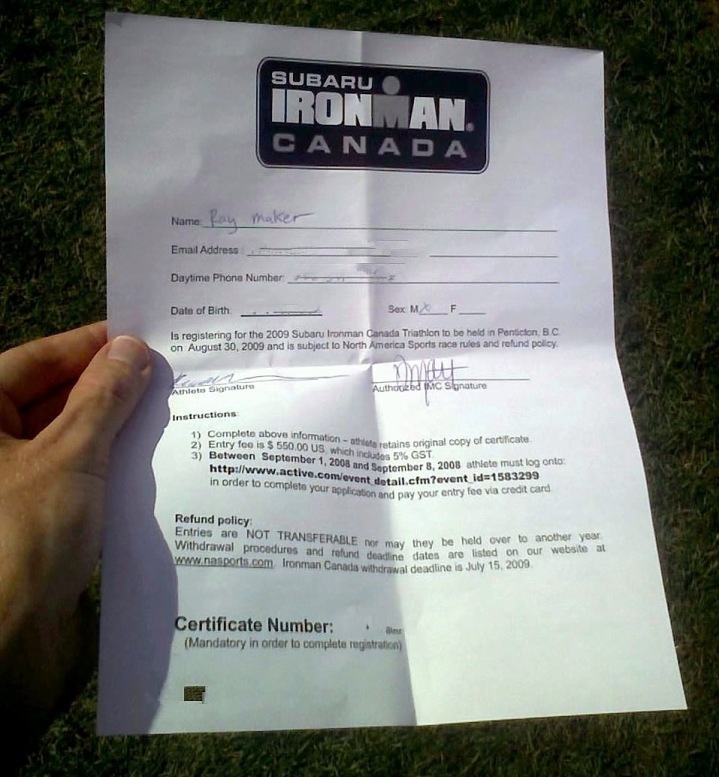 Afterwards, I headed back to the hotel to pack up all my bags before eating and taking a short nap. 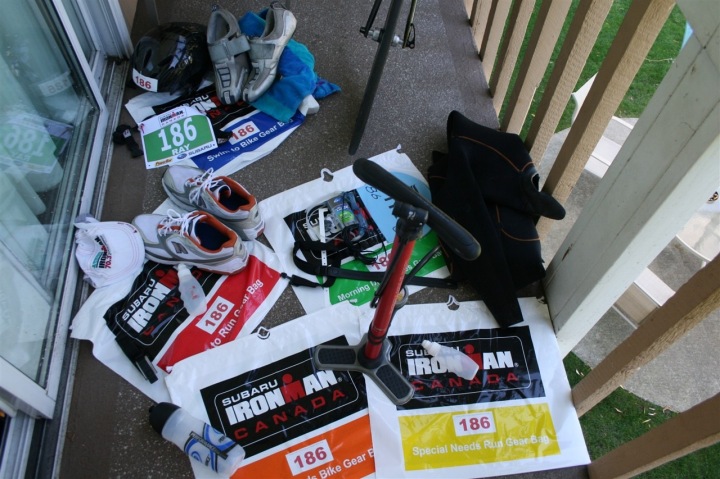 I like to pack all the bags outside whenever possible, as it just makes everything more clear and forces everything away from any furniture (which is a dangerous place for items to escape under).  Yes, there’s a lot of bags:

The nutrition bottles I’ll fill tonight, but I wanted to ensure the ‘count’ was all correct first.

I also taped a few reminders to my aero-bottle: 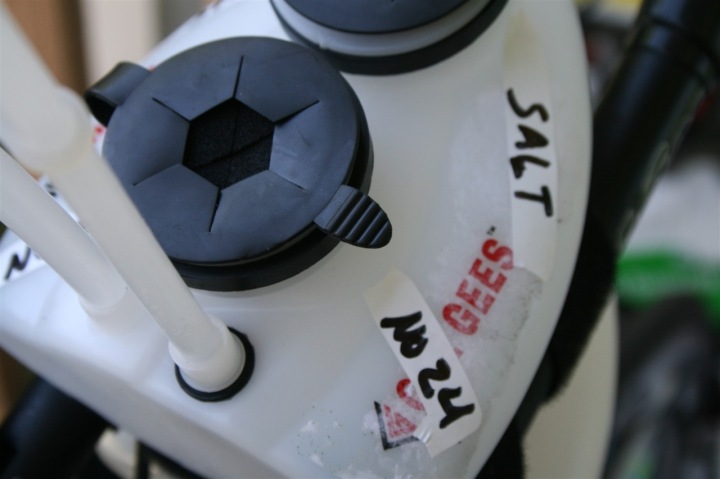 The first one is ‘Salt’ to remind me to take Enduralytes (salt tablet things), as I often forget those.  The second one below it says “No Z4”, in an attempt to remind me to not ever go into Z4 on my bike.  Z2 the whole way except climbs in Z3.  I wanted to write “Don’t be a dumbass in Z4”, but my leftover stickers weren’t long enough.  If I go out too hard on the bike, I crash on my run.

From there it was down to transition area to check-in the bike and ‘Swim to bike’ and ‘Bike to run’ bags.  The other bags I handover tomorrow. 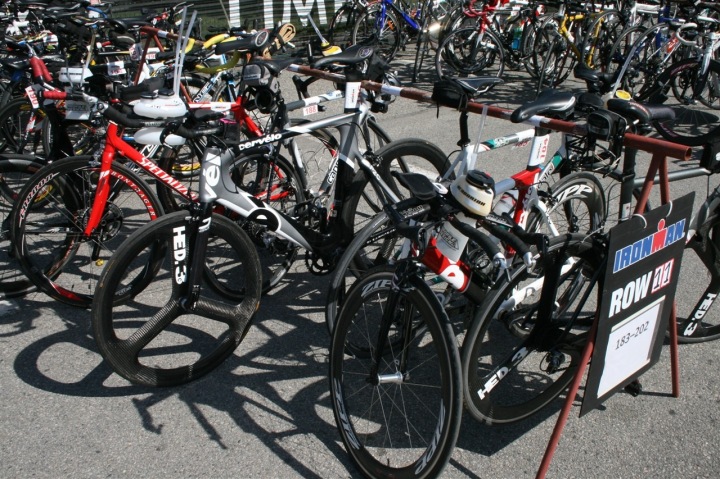 (Mine’s the one on the left, silver Cervelo with HED3 wheels) 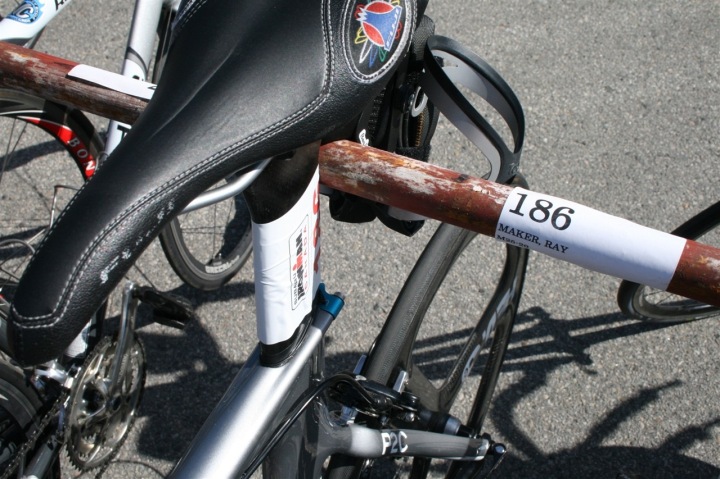 I actually have a kick-ass bike rack position, a mere 5-6 racks from the bike exit.  Which means very little distance to run with my bike to the exit.  They take your bike from you as you enter T2, so I don’t have to run with it again then. 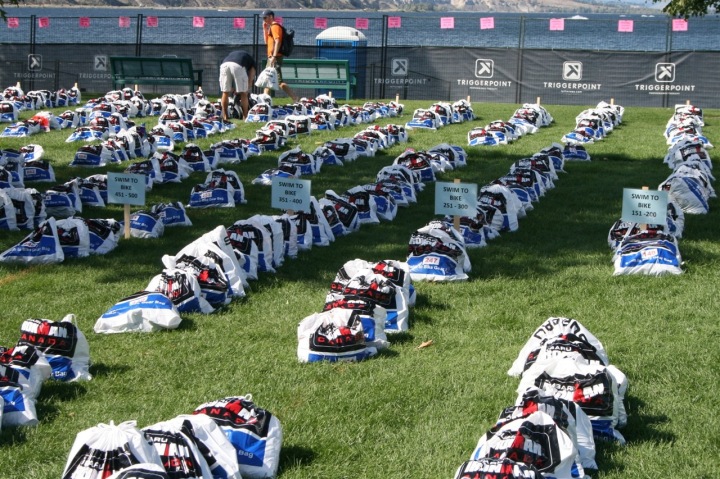 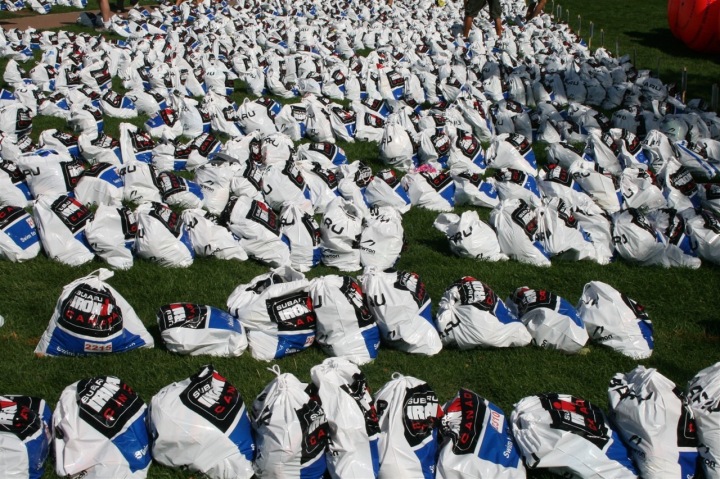 Then, it was a quick jaunt over to the ‘Bike to run’ bag drop-off, where I stashed my running shoes and Garmin wrist strap. 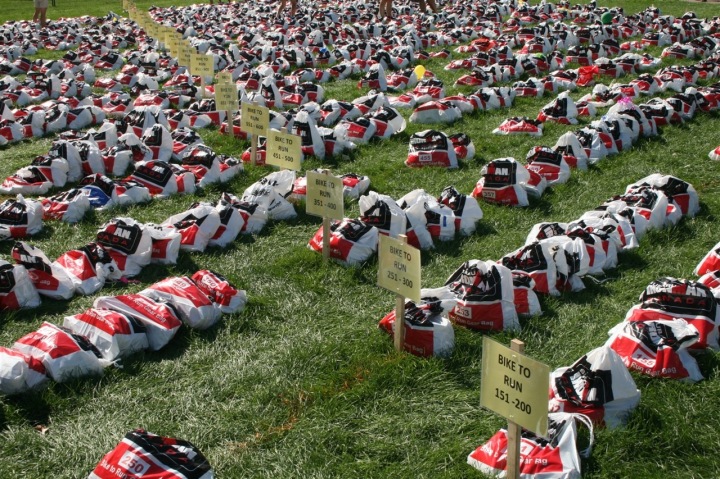 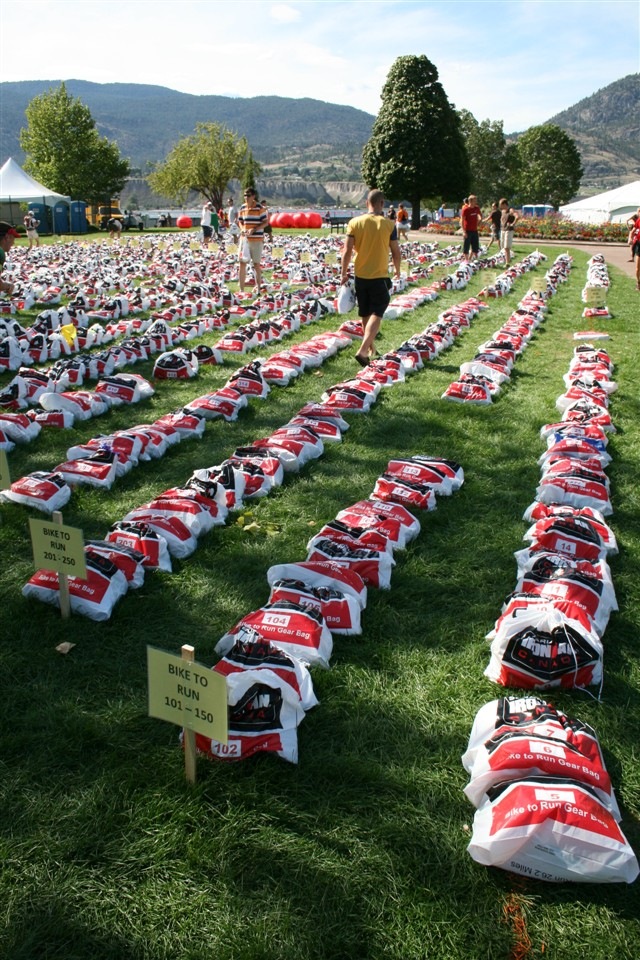 While wandering around the transition area, I found the swim buoys for tomorrow.  I don’t understand what it means by “Not a toy”.  Odd.  Seems like a fun toy to me. 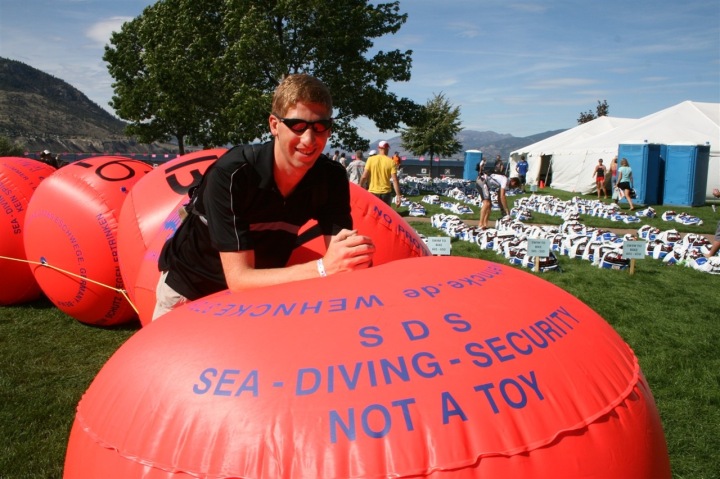 Before exiting transition, I made a swing by the line of pro bikes.  It was interesting looking at them – not because of the bikes themselves, but because of what was on the bikes.  For example – Pro AJ Johnson had his power specifications for each leg of the race: 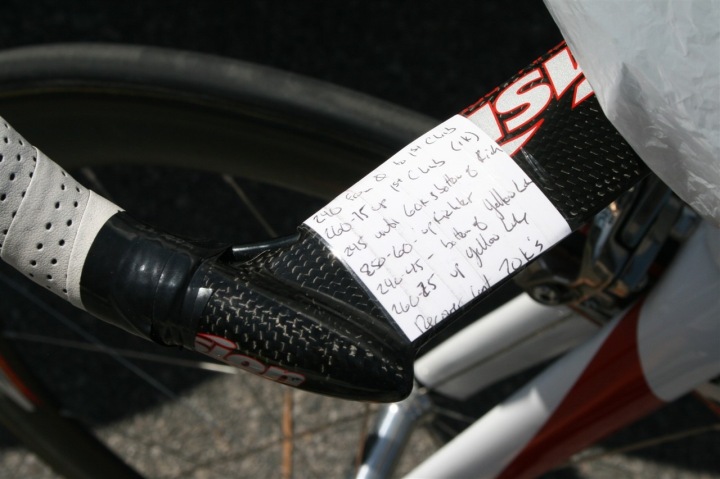 And Pro Duncan Milne had a picture of his wife and baby on his bars.  It was heavily faded, definitely well worn. 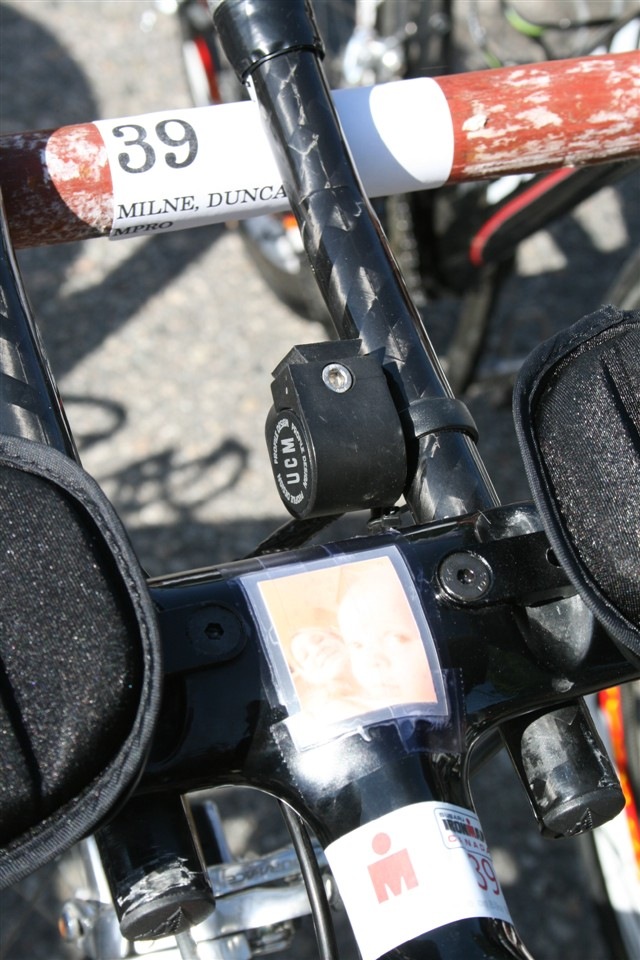 Me however… I prefer to have my photo on the front page of the local newspaper.  Today’s edition has me in the upper right hand corner – as part of yesterday’s Underpants Run. 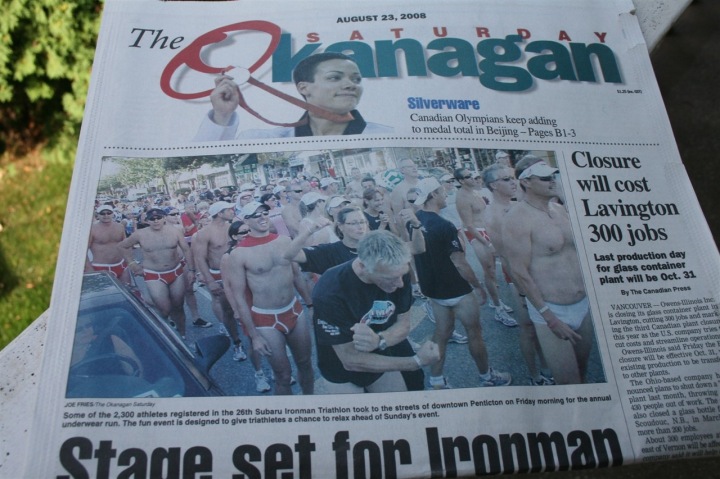 (Sorry sportsfans, you can only just see my head in this photo)

As I left transition for they were just putting the final touches on the finishing area. 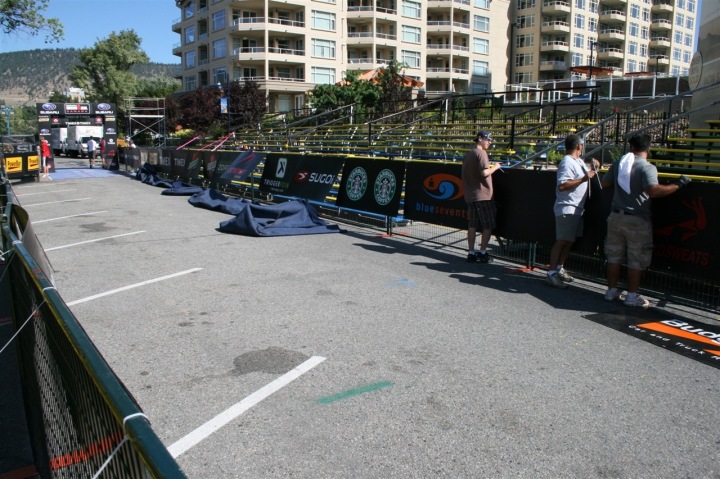 Which…brings me back to the peach.  Early tomorrow evening when I see the peach for the final time it will end a year long journey from the first peach sighting a year ago at registration to the final mile of the run along lake shore drive.  It is the culmination of over 4,000 miles of cycling since last August, 1,300 miles of running and 180 miles of swimming (316,800 yards).  But no matter how many miles I’ve put in – I can say I’ve thoroughly enjoyed the journey and the tons of new and close friends I’ve made along the way.  I wouldn’t trade any Ironman finish or medal for those friends and memories.

The next time I post I post I’ll hopefully be an Ironman. For those tracking online tomorrow on Ironman.com starting at 7AM PST:

And with that… I leave you with the peach again, but this time – showing not the starting beach, but the finishing line just barely visible to the right.  Thanks again everyone! 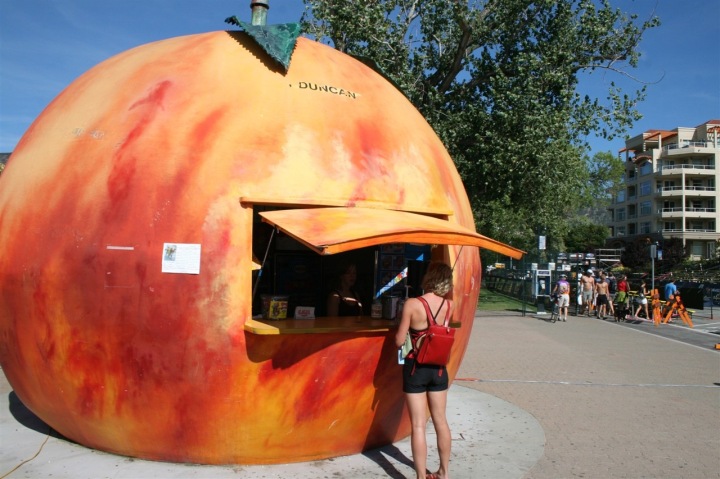