September 4, 2007 by DC Rainmaker|Uncategorized|Comments (5)
In mid-July I realized that if I really wanted to do an Ironman at any point in the next 12-18 months I’d better signup for one. With IM CDA filling up in a matter of days, and other major races often going just as quickly I needed to make a decision on which race I wanted to dance in. Being mid-July, that really only left me with a few choices. Ironman Wisconsin was an option – but since I’m doing a 70.3 on the same day, it might make it logistically challenging to signup. Ironman Kentucky was also an option, but given I train in DC (where it’s hot and humid), I know that Ironman Canada would give me a bit of an advantage (assuming it’s anything below 100* and humid). After polling some folks on a triathlon discussion list, I decided that Ironman Canada 2008 would a great place to join the 140.6 fun. It also had the added benefit of being only a 5 hour drive from my hometown of Seattle, WA – thus making it easy for family and friends to come out.

The only trick to signing up for Ironman Canada is that you have to do it in person in Penticton, BC…Doh. 364 days in advance…Double-Doh.

Ahh, fear not though – I am the master of finding excuses to travel. Because I used to live in Seattle, I’m always up for a trip back. Tying a trip to Seattle to visit family, while taking a brief international road trip sounded like the perfect scheme.

Because the hotels in Penticton fill up a year in advance, I decided to head up the morning of the race – thus limiting my car sleeping nights to one. I also had to get in my long workouts on Saturday anyways, so it all kinda worked out. I left little ole Mukilteo, WA around 1PM and wandered over the border at Sumas, WA and through some incredible mountains, ending up in Penticton around 6:30PM. I was concerned it would be raining when I got to Penticton as it rained pretty much up into the last mountain on the drive. But the skies over lake and surrounding area were clear. 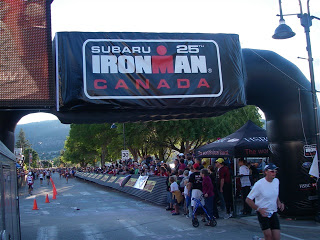 I loitered around the finish line area for a while as the clock ticked past 12 hours, took a few token pictures (see above) and then set off working backwards along the run course. I knew that the further out I went the more useful me and my cowbell would be. Oh yeah, you heard that right – MORE COWBELL! And not any little finger sized cowbell, we’re talking a solidly built (from Europe no less, the home of cowbell ringing) noise emitting device.

I walked until I found a quiet portion of the course, thus stationing myself around 3 miles from the finish. At this point, it was about 8PM, so it was a mix of runners and walkers.

For about 2.5 hours I cheered on every single person that went by. I had rules of course. Not everyone could get the cowbell. Realistically – ringing a cowbell for four straight hours would likely make me deaf. The Rules of Cowbell were as follows:

I was thrilled to be able to see one person I knew that was racing this year. I had written down a whole bunch of numbers and names, but it’s always difficult to know if they had passed or not. He got the Cowbell treatment too, as well as a short 100 yard run. Congrats on finishing!

Next up, tips for camping overnight in line to try and get an entry spot. Until then, More Cowbell!