Expect some indoor bike/trainer first looks and reviews goodness coming up this week (for already announced things). Plus probably a bit of Apple Watch stuff too. And, who knows what else might hit the pile!

There’s currently a new deal bundle on the Wahoo KICKR18 (most current model for this upcoming winter) and the Wahoo KICKR CLIMB, which saves you $200. We don’t generally see sales on Wahoo gear outside of the Black Friday and spring sales, so if you’re looking for a deal on these particular items, it’s solid.

Plus, you’ve basically just made yourself a Wahoo KICKR Bike for half the price. You can spend the savings compared to the KICKR Bike on approximately 400-500 pints of Ben & Jerry’s Ice Cream. Oh, and free US shipping and immediate availability.

Episode 86 of the podcast is up! Here’s your complete Eurobike 2019 sports tech recap. We dive into all the new tech found at the show this year, and our thoughts on everything. Here’s the full lineup (in the order we discuss them):

Here’s a not-so-small smattering of all the random things that I stumbled on while doing my civic duty to find the end of the Internet (and in this case, some of these are from the past few weeks…as my backlog is a bit longer coming out of summer):

1) Peloton gets sued harder: Assuming harder equals now some $300 million, after the music industry realized they were Napstering a bit more music than they realized at first.

2) The Endurance Sport of Chess: Yes, chess. Definitely some things that never would have occurred to me in this post. Seriously, it’s crazy interesting. (Thanks to Robin for the tip!)

3) Garmin South Africa Leaks Payment/Contact Data: I think the title sums it up. If you’re in South Africa (or have ordered from Garmin South Africa online), your contact info is no longer yours. My understanding is this is handled by an entirely different entity than the rest of Garmin, hence the country-specific leak.

5) What it’s (actually) really like to ride illegally as a woman in Iran: This isn’t a piece that has a feel-good ending. Which, is probably even more the reason you should read it. It’s short, but hopefully memorable.

6) Fitbit to supply free activity trackers to Singapore Health Program: Sorta. If Singaporeans pay the $10/month for Fitbit’s new Premium service, they’ll get the band for free. Pro Tip: It’ll be more expensive this way. Though, sounds a little bit like the old wireless carrier concept that did the same for phones.

7) Zwift Art: This seems cool – turning various recognizable scenes in the Zwift world into art that could easily fit in your living room. Neat stuff for sure.

8) COROS adds some new colors to APEX: This includes both new colorful straps as well as units themselves. You can check out my COROS APEX review from a bit earlier this year. Somewhat notably however, they will be phasing out the older colors and these newer colors will be the 2019 variants. 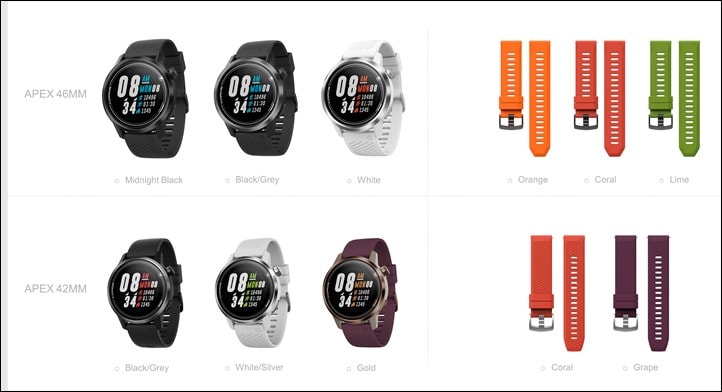 Garmin Fenix 6 Series Sensor Firmware Update: If you’re one of the handful of people whose optical HR sensor wouldn’t turn/stay on, this should fix that. Note that technically the 2.25 version is the beta build, whereas the 2.30 is the production build that’s pushed out. But that’s only pushed out to 20% of people thus far, whereas if you need it today, just grab the beta file instead until you get offered the final version. Both are fine to use to get you going. If you don’t know what problem I’m talking about, don’t worry about it.

GoPro Hero 7 Black Firmware Update: This is from last month, but in case you didn’t catch it – it’s worthwhile as it fixes some freezing issues.