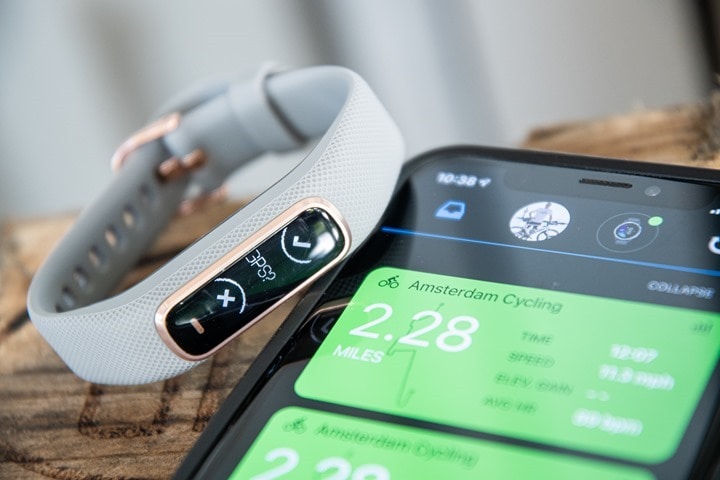 Last week Garmin ever so quietly added so-called ‘Connected GPS’ functionality to the Garmin Connect Mobile application, while concurrently releasing a firmware update for the Vivosmart 4 (which came a year ago), as well as incorporating it into the base Vivomove 3 announced last Thursday. The functionality essentially gives these wearables GPS, as they don’t have GPS chipsets inside already. This functionality follows with what Fitbit added many years ago for their GPS-less wearables, under the ‘Connected GPS’ name as well.

This allows you to not only record a GPS track leveraging your phone’s GPS capabilities, but also get/see speed and distance on your wearable, despite not having any sensors or GPS in the unit itself. This is especially notable with cycling, since it can’t instead use the accelerometer like it can for walking/running activities. Which, by the way, is a good time to note that Garmin also now added in cycling as a sport to the Vivosmart 4 too.

Since this is something that many people have been asking about for years, I figured I’d give it a super quick whirl around the block. Or more specifically, a whirl on this morning’s bike commute.

Setup is silly easy, but first you’ll want to make sure your device is fully up to date. In the case of the Vivomove 3 it comes with the required software, whereas if you’ve got the Vivosmart 4, you’ll need to update the firmware. Garmin’s smartphone app has likely already done that for you in the background in the last week or so, but you can force the issue using Garmin Express on the desktop with the charging cable. You’re looking to be on firmware version 4.0 or higher. 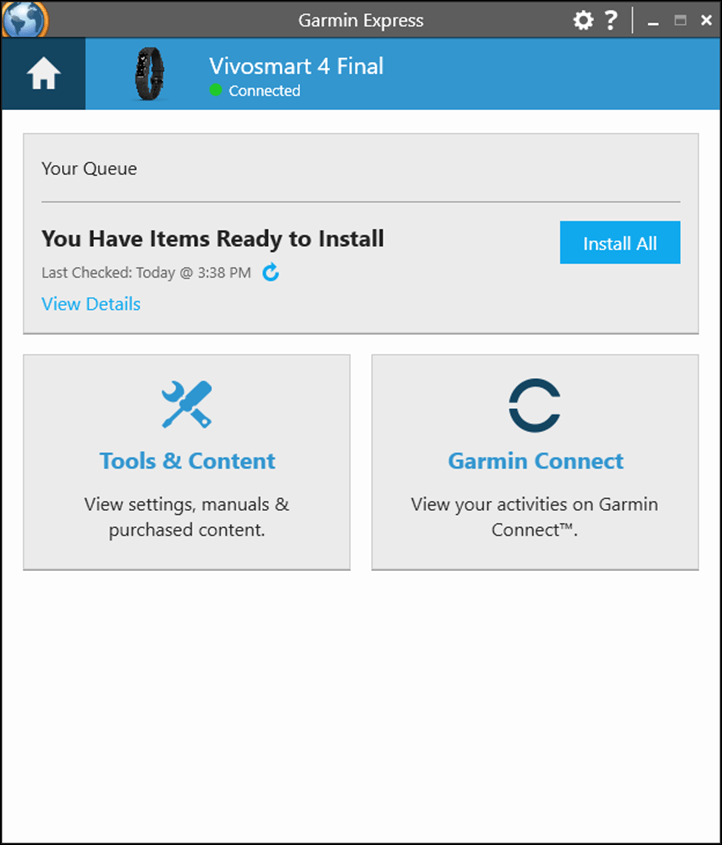 The above screenshot was the highlight of my little Vivosmart 4’s life. It’s been living its life from box to box, ultimately now in a clear Rubbermaid container on a shelf next to dozens of other containers. But today….today it was called into duty!

And in fact, it’s exactly why I go out and get my own units after returning the loaner ones – for posts like these (and comparison shots in reviews). This would be the first time this device got to experience the wilds of outdoors. Or even being charged. It’s life is now fulfilled.

In any event, assuming you’ve got your wearable all updated, also go ahead and make sure your iOS or Android app is updated too. You’ll need the latest version of Garmin Connect Mobile on there in order to see the new connected GPS features.

And that’s it, there’s nothing else to do or configure.

This is equally as simple. To use the connected mode you’ll go to start a workout like you normally would by tapping the little runner man (or woman) icon. 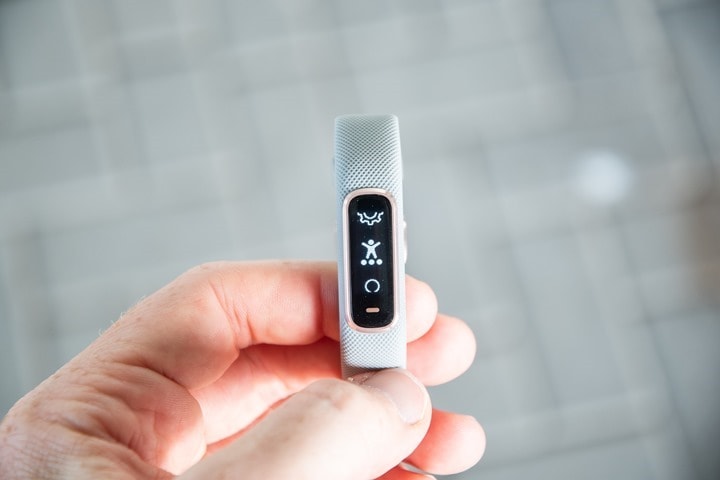 You’ll then choose your sport (remember you defined those within the app under More > Garmin Devices > Activity Options), which is a good time to point out that as part of this same firmware update (4.00), Garmin has added cycling as an activity.

So, I selected cycling for my ride to work: 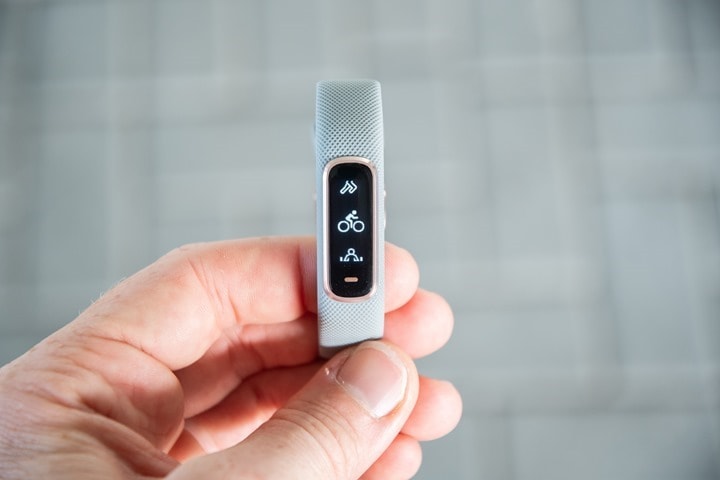 After you’ve selected your sport on the device itself, it’ll ask you whether you want to “Use Phone GPS?”: 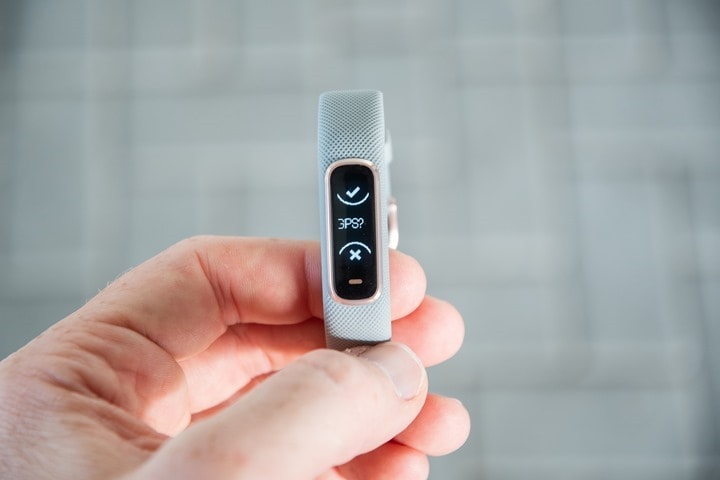 If you choose ‘Yes’, it’ll go ahead and ensure it can connect to your phone.  Once it’s done, it’ll confirm that. It might take a few seconds, and in some cases I had to open my phone up for it to make the initial connection, then I could stick it in my pocket. 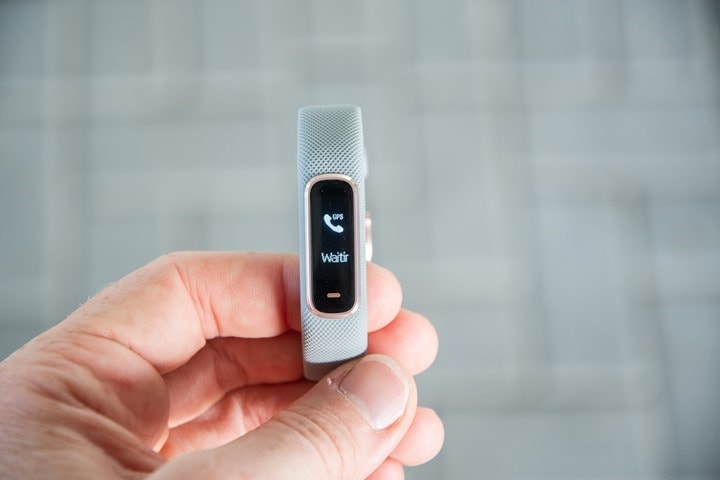 After confirming it’s connected you’ll see a small phone icon next to your sport, indicating the connection to your phone for connected GPS. Simply double-tap like normal to start the workout. 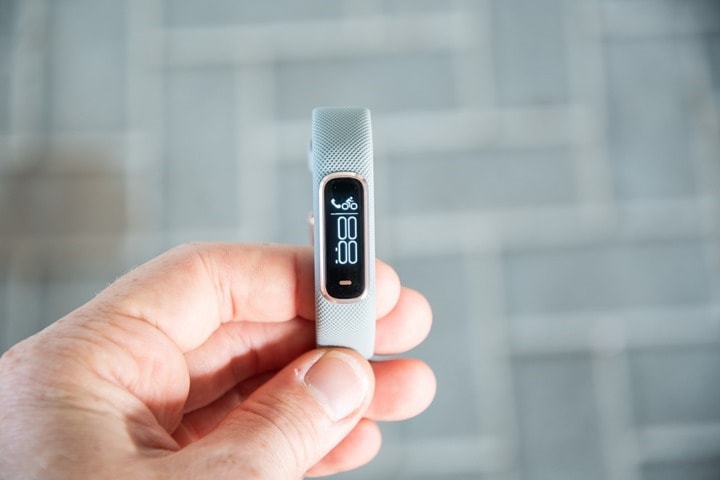 And then at this point you’re off and recording like normal, now with heart rate and GPS for distance. In fact, you’ll see distance as well as speed for cycling as options within the configurable data fields on your smartphone:

And while out riding (or whatever it is you do), you’ll see that metric here as well. In my case, I just did a commute to the office as my test. Nothing fancy. The top line is the distance. Sorry, the photo makes the display look funky, the refresh rate on these types of wearables makes it really tough for cameras to get good clean photos (and in this case, my main camera battery had died so I had to use my phone). 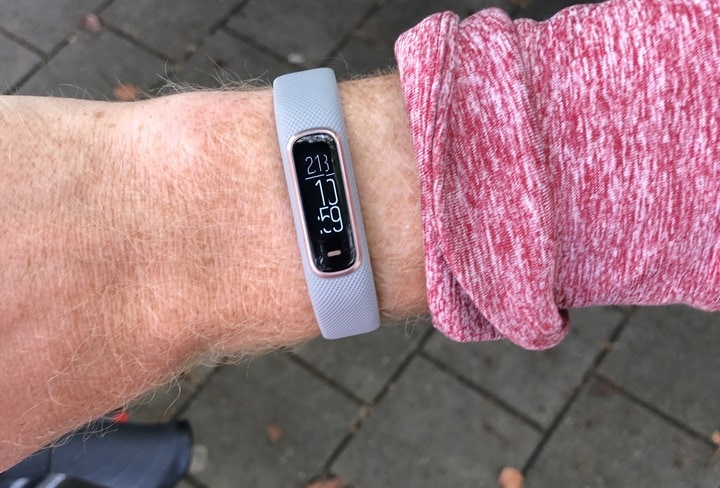 Afterwards I saved the short track, and sure enough you’ll now get a map on Garmin Connect/Garmin Connect Mobile. Note you’ll see it shows ‘Connected GPS’ on the lower left side.

And here’s how that GPS looked accuracy-wise connected to my iPhone X on my bike’s handlebars with a Quadlock mount, as compared to the dedicated GPS of the Garmin Venu on the other wrist:

In general it’s pretty close, but there are cases where the Connected GPS Vivosmart 4 goes a bit askew, such as this section here (the Venu is spot-on):

And then again a bit later where it went to the wrong road again. In fact, in both cases it appears to lock onto a nearby road (yet I was on the bike path next to it). Which is kinda funny. I’m not aware of any logic to do that, so these could be just coincidence versus some sort of actual logic using phone data.

Ultimately, the dedicated GPS of Venu was better than the iPhone X connected Vivosmart 4. Here’s the full GPS track for those that want to dig into it. As I noted, it’s not very long, just my commute with a bit extra/tweaked for good measure.

In general when I’m looking at ‘Connected GPS’ type implementations, you have to remember that the phone’s GPS accuracy is a big part of it. But it’s not the whole picture. Virtually every mainstream app that leverages GPS for fitness also does some smoothing, tweaking, and otherwise modification of the data coming in. Sometimes to ‘fix’ issues with it, and sometimes making things worse. While undoubtedly Garmin has boatloads of GPS experience, they don’t to my knowledge have boatloads of phone-based GPS fitness track experience. As such, I suspect we’ll see them stumble through all the weird idiosyncrasies of various phone models/vendors over the next few months as people find weird quirks. This can also include quirks around things like dropouts of GPS or connectivity.

These quirks are realistically the same stuff Fitbit has had to deal with for years, so they’ll have a bit of a jumpstart there. Though I don’t think that’ll matter a ton. Garmin’s launching this on two products that in the grand scheme of the wearables world are pretty low-volume. Thus, they’ll be able to work things out without too many nitpicky folks noticing.

In any case – for now though – it’s a cool little feature that seems to work as expected, once you get it up and running.

(Side note: Some folks (including me) have noted some quirks with getting the new cycling sport to show up in the app, or on the device. I tried restarting the app without luck, but I followed someone on the Garmin Forums saying to restart the phone (yes, it’s odd). That didn’t work for me though does for some. Nor would the device successfully connect to GPS on the phone either initially. Ultimately, after ensuring my firmware was fully updated, I went into the settings on the Vivosmart 4 and simply reset it back to factory defaults with data deletion, and then deleted the Vivosmart 4 out of my Garmin Connect Mobile app, as well as deleted the listing in the Bluetooth control panel. Then I re-paired it like a new watch. Note you don’t lose any data in Garmin Connect this way, so as long as you’re sync is done before you delete, the whole operation will take only about 2-3 minutes. I suspect that something was stuck where the smartphone app wasn’t seeing the new 4.0 firmware on my device, and thus not opening the doors to all the new features. In any case, hope this helps someone.) 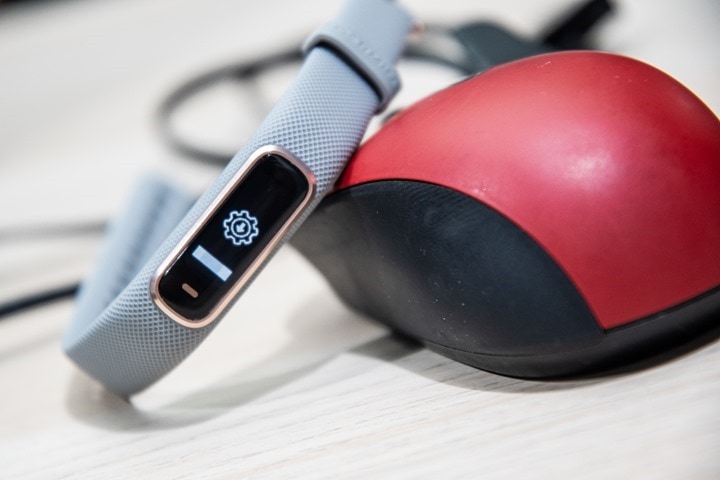 It’s pretty much a no-brainer that Garmin’s going to include this in any new GPS-less wearable products going forward, such as they did last week with the Vivomove. Though, I suspect, like Fitbit, they’ll keep it to the mid-range GPS-less devices. For example, Fitbit doesn’t actually offer this on their lower end ($69) Fitbit Inspire trackers. Only things starting at about $99 with the Inspire HR support it. In Garmin’s case, I’ve gotta believe that’d translate to the basic Vivofit series not getting it. But perhaps I’ll be wrong in the future.

I think there are actually some cooler use cases within the Garmin ecosystem for this though. For example, the new V2 speed sensors that have offline storage on them. I’d love to see a simple toggle where I could have it automatically create an actual GPS track when the speed sensor wakes up and talks to the phone (anytime the wheel starts). Then from there I’d love to see heat-maps of my cycling over time in my Garmin Connect account.

Given that functionality of the new sensors is really targeted at bike commuters, it’d be a super cool feature, especially in a monthly summary report like what Google and others do around location data.

And of course longer-term I’d love to see clean hand-offs between devices and the phone. For example – say your Garmin Edge device is running low on battery during the final few miles of a century ride, down to its last 1%, and you need a bit more time – how about handing off the completion of that GPS track to the phone? This way it all ends up on a single activity. Again, I’m not asking for Garmin to recreate Strava, I’m looking for Garmin to find ways for this to complement the devices people buy. And this feature is hardly unprecedent – Apple actually does the inverse to save battery: By default, if your phone is with you, Apple Watch will use that signal instead.

In any case, you and I can come up with cool ideas all day long (perhaps drop them down below), but for now – this is a perfectly functional first attempt at connected GPS for Garmin’s wearables.