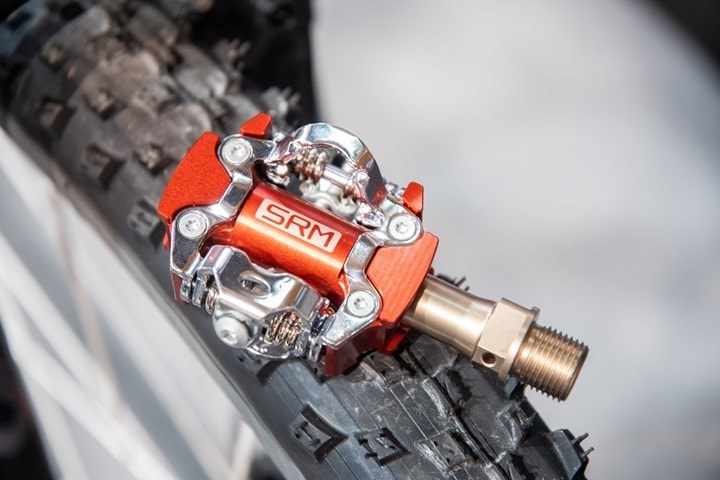 For the first time in approximately ever, I’m actually excited about an SRM product and where the company is heading. Here, right off the top of this post without a wordy intro, in a mere three bullets I’ll explain why:

1) It’s actually priced appropriately and competitively in the market
2) It doesn’t involve Look’s engineering work, for which the SRM EXAKT pedals were based on (to significant fault)
3) It’s unique in the market and could be the first shipping product in the category (MTB power meter pedals, also applicable to gravel and cross as well)

And that’s about it. That’s roughly all you need to know.

Oh, I guess, I mean…sure…there’s a bit more. Like specs and stuff I suppose. So let’s talk about those.

The SRM X may well be the first power meter pedal for mountain bikers once it gets to market later this year. Though, I suppose that title will depend a bit on whether IQ2 can get there first or not with their altered-course Kickstarter project. But, I’m going to presume SRM will win this battle, if only for the reason they’ve been actively testing and riding their pedal since earlier this year. Plus, power meter experience and all that.

But again, let’s focus on some quick specs first, since that’s the good stuff:

Now as I alluded to earlier and directly in the line above, this pedal is an SRM-only venture. Meaning that the SRM EXAKT pedal that came out last summer was in partnership with Look. The challenge there was that they adopted Look’s method of installation and calibration, which required special tools, boatloads of finicky time, and enough patience to not throw the bike at incoming bus traffic.

But that’s gone with the mountain bike variant. SRM has transitioned to an install process that mirrors normal pedals: Crank them on…and done. Just like Favero Assioma, Garmin Vector, and the PowerTap pedals. No fancy tools, no funky apps, nothing. Just twist on.  They’re able to do that by adding in an accelerometer and gyro, which also lets them ditch the magnets of the SRM EXAKT pedal (magnets were used to determine rotation of the spindle, and thus used for cadence and ultimately power output). 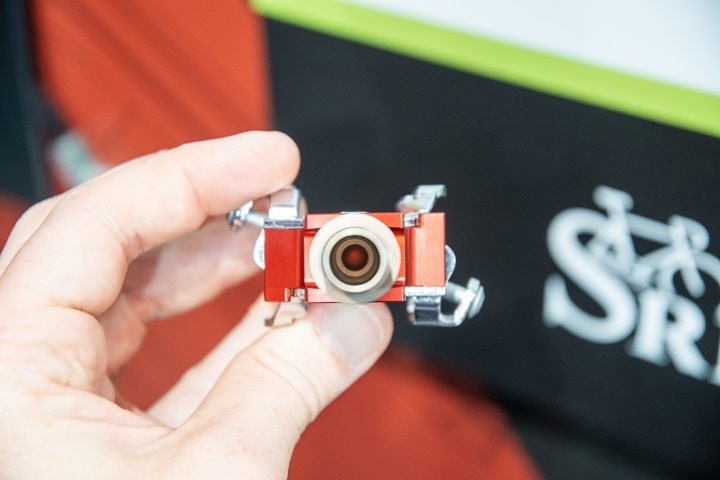 Next, just like the SRM EXAKT pedals, it contains active temperature compensation in it (in fact, the newer crankset SRM Origin units finally also now have temperature compensation in them, alongside dual ANT+/BLE). The importance of that is realistically less meaningful in mountain biking where you’re often stopping and starting pedaling, whereas in road cycling it’s a huge deal for anyone that’s done long climbs up mountain passes where the temperature shifts dramatically and you don’t stop pedaling.

From a battery standpoint, the pedals are slated for 80 hours, and use a magnetic charging adapter to charge each pedal individually. Unlike the EXACT pedals, I’m told they’ll actually include two of the charging adapters in the box. So you know, you can actually charge your two pedals at the same time. 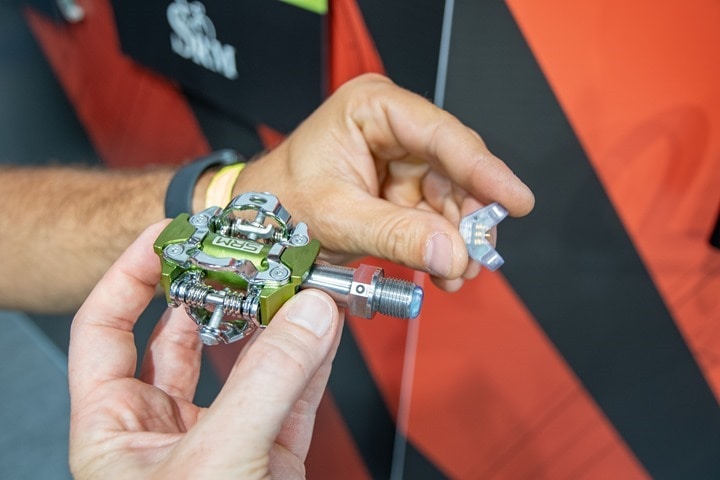 Like SRM’s head units, it’ll come in a slate of colors. I’m told the same list of colors as the SRM PC8 is available, which…is a lot of colors. The reason is more simplistic though: The pedal spindle easily (with a tool) slides out of the pedal body. The entire thing is self-contained in the spindle: Battery, communications electronics, strain gauges, small villagers, everything. That means you can buy different colored pedal bodies and swap around. So perhaps you have two dramatically different color-schemed mountain bikes, this solves any sort of fashion faux-pas. 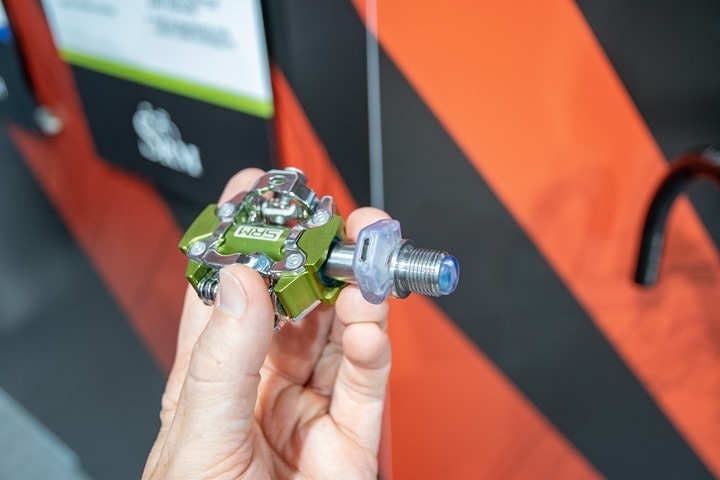 The whole thing is housed inside that stainless steel tube there, which SRM says they’ve gone through dozens of test variants on to find just the right materials and construction that’s able to withstand the horrible life that is being a mountain bike pedal. The company’s engineers have been riding the pedals since earlier this year out on real trails with real mountain bikes.

Note that it’s likely we’re going to see a pile of SPD power meter pedals, as my understanding from multiple people is that Shimano’s SPD patent expired earlier this year. Something that Google seems to confirm.

Like with the SRM’s road pedals, this will transmit ANT+ & Bluetooth Smart, and power balance (left/right balance) for both. It won’t do the recently opened up Cycling Dynamics, but I suspect there’s less interest in the mountain bike segment anyway for that. 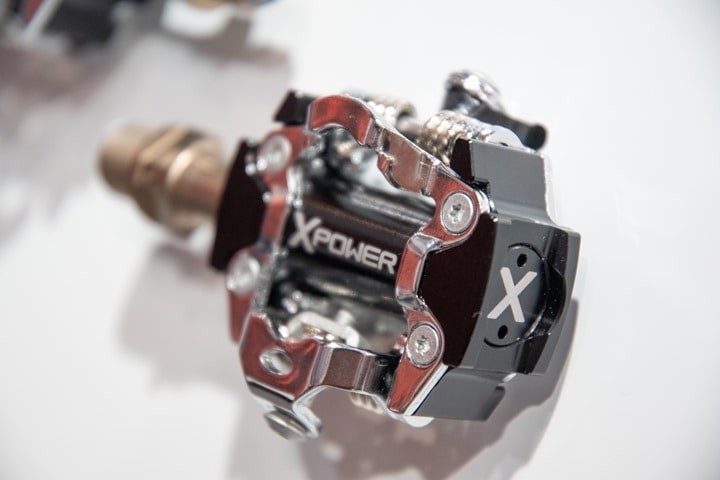 Now, of course, I haven’t tested these pedals yet. Be it on a trainer or out in the wilds of rough terrain and hitting against rocks, trees, and small gnomes. That’ll come at some point down the road, likely towards the end of the year when they’re set to start shipping.  So things could go horribly wrong when I actually try and use them and compare them to other power meters on the same bike.

The shipping plan sounds like it’s December, but I got a bit of a feeling from talking to multiple people at SRM that might also be more like a January or so. I don’t think there’s an appreciable difference between those two for the sport of mountain biking in most snowy markets. 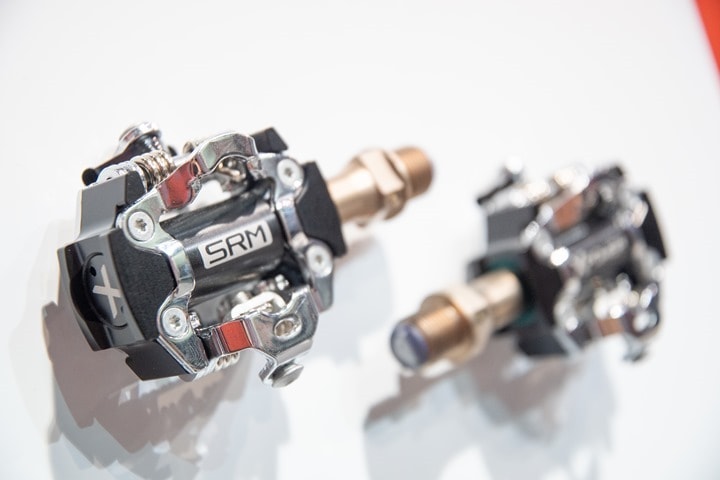 As I said at the beginning – I’m actually reasonably excited this could be a turning point product for SRM. By and large the company hasn’t been innovating in the last few years, and as a result, has seen their market share dwindle down to almost nothing in terms of % of new power meter sales – despite having massive brand recognition in the sport. That’s largely been a function of price, but also technologically too.

However, the SRM X seems to be on the right path towards redemption. From a first look standpoint they’ve gotten rid of the parts of the technology that were weighing down the product, while focusing on simplicity in setup. The ability to swap pedal bodies easy is appealing from a breakage standpoint but also just from a cosmetic standpoint – plus, nobody else has that. But of course, the biggie on the ‘nobody else has’ front is simply a mountain bike pedal based power meter. As noted earlier on, IQ2 has shown one on their new directions campaign, but we don’t know how real that is, nor where they stand in product development and accuracy out on the trails.

But finally – there’s that price. Right now at 1,000EUR (assuming VAT-inclusive), it’s competitive on the European side for sure. If they can match for parity on the USD side ($1,000USD), that would be highly competitive and in line with road-bike power meter pedals (Vector 3 is at $999, though the PowerTap P2 and Favero Assioma pedals are lower priced). Given that SRM stands to be the first to market with this, the slight premium over PowerTap and Favero would be logical. I fear any higher though and they’re likely to lose interest from many riders. Certainly there’s an element of mental price-break math, and $999 is a well established price point break.

With that – I look forward to testing these out when the times comes, hopefully later this year. Thanks for reading!