Zwift Officially Launches Running: What you need to get started! 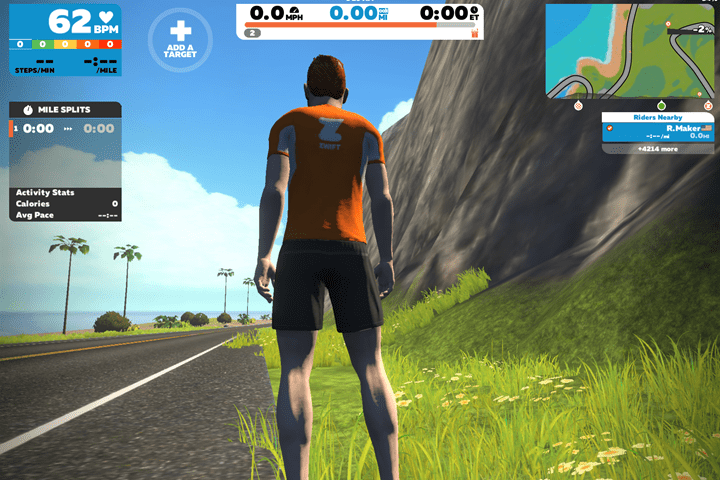 Today officially marks the launch of Zwift running.  Of course, such a date is merely a formality. Or rather, mostly an opportunity to gather a bunch of press, running companies, and celebrities in NYC to…err…run on treadmills.  That’s because of course Zwift running has been available in one form or another for quite a while, though only more recently becoming truly easy to access.

Still, it’s worth noting (or celebrating, depending on your perspective) this milestone. There’s no doubt that Zwift has significantly changed the landscape of indoor training, built largely on the successes and foundations laid by companies like Wahoo and TrainerRoad in the cycling realm.  The question is – can they do it in the running realm?

Within the sport of running there is no real (or meaningful anyway) competitor to them at this point.  But there’s also very little foundation laid by others either.  Whereby Zwift had the openness of indoor trainer standards for cycling, that largely doesn’t exist for running in the treadmill world.  Not to mention that interacting with a screen while running is logistically more challenging than sitting on a stationary bike.

Still, Zwift has a head start on what they likely see as their primary competitor: Peloton.

With Peloton announcing their high-end treadmill last month at CES (and slated for shipping later this year), Zwift can position itself about 6-8 months ahead of Peloton.  And more importantly at a price point that doesn’t break the bank.  After all, Zwift’s monthly subscription fee is 1/3rd that of Peloton, and doesn’t require you purchase a $4,250 treadmill.

In any case, without digging into the futures too much – let’s talk about what you need here and now to get started.

The Gear You Need: 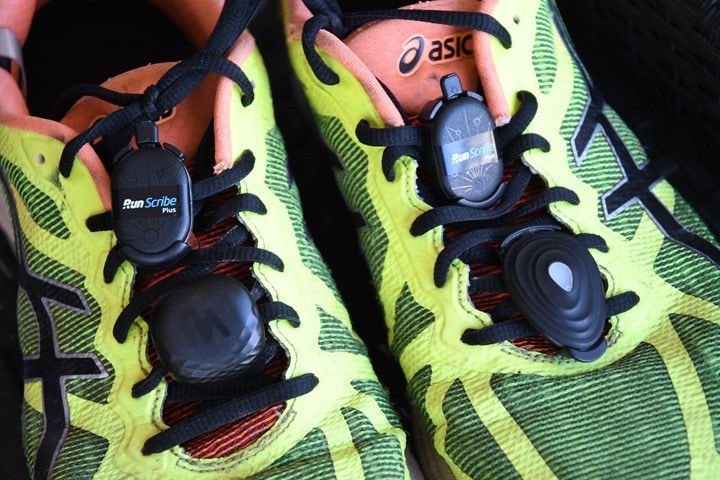 Thankfully, the gear you need to get started on Zwift Running is pretty much the same gear you would have needed for cycling – at least in terms of running the game.  You’ve got the same usual options as before:

Still no Android tablet/phone support released yet for the game portion, so you’ll have to hold on there a wee bit longer.

The next piece required is some way to tell Zwift your current running pace.  In today’s world that basically means a footpod.  If you’re on iOS, you’re probably going to want to use a Bluetooth Smart footpod.  Whereas if you’re on a PC/Mac and already have an ANT+ USB stick, then you can use an ANT+ footpod.  For reference, here’s a few to consider:

Note that Milestone is oddly out of stock on both their site as well as Amazon and many other retailers, which is too bad because at $29 it’s long been the best option to get on Zwift running inexpensively.  I reached out on when might see more stock, and got a short two-word reply back “probably April”. Update the next day: They’ve sent over a much longer version today, which notes that they had unexpected demand during the holidays, coupled with an unforeseen production delay in their next set of pods.  They did note that many retailers do still have stock if you use their store finder (and that’s true, Amazon UK still has it for 29GBP).

Secondary note: It looks like Stryd is doing a limited edition variant of their footpod for $99, though, it DOES NOT include power.  But it does have an orange clip.  Orange clip aside, that does seem pretty pricey.

Third note: Zwift also supports the Apple Watch as a pace/HR device, which is pretty cool.  It can be paired assuming you’ve got the Zwift Apple Watch app installed.

Here’s the list of full products that you can buy (or might already have).  I’ve left out those that aren’t yet shipping:

Beyond that, you’ve also got the upcoming Scosche 24 that’ll do the trick as a combo optical HR sensor and footpod.  Remember though, that the Garmin HRM-RUN/HRM-TRI straps (or RD-POD) don’t transmit running pace, just cadence. So those won’t work here. 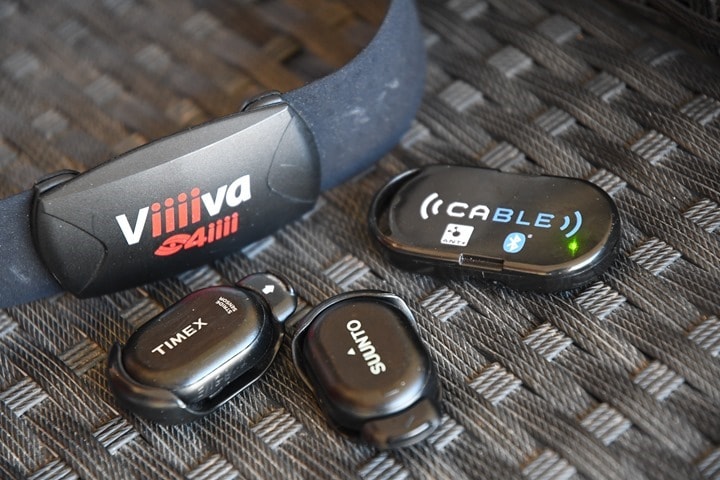 Oh, and finally, if you’ve got a 4iiii Viiiiva or NPE CABLE, then those too can convert ANT+ devices to Bluetooth Smart, which Zwift iOS can then happily accept.  Beyond that, there’s like six treadmills on this entire planet that transmit Bluetooth Smart running pace as well.  Maybe you’re one of the sixers or something.

Once you’ve got your gear all set, you’ll want to get things paired up.  However, first you need to ensure that you’ve selected the ‘Run’ option at the top.  It’s pretty obvious these days (whereas in the past it was a secret entrance). 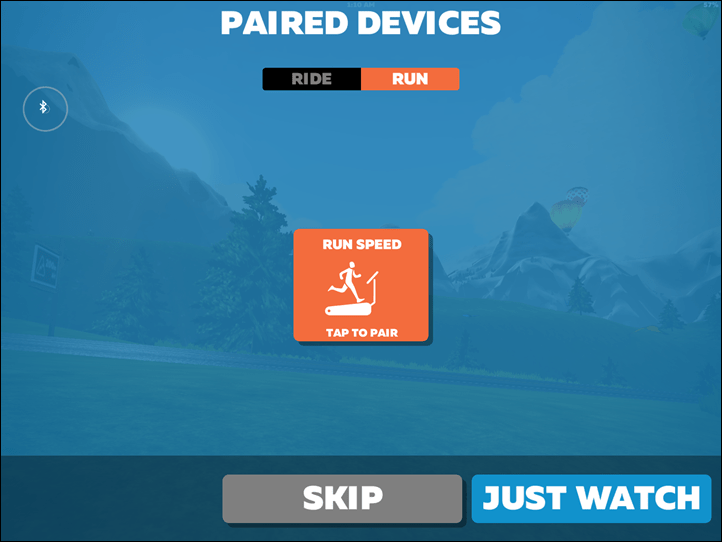 After that’s done it’ll ask you to pair your speed device.  For 99.785% of you, that’s going to be a footpod of some sort.  However, if you’re that .015% that happens to somehow own a fancy Bluetooth Smart enabled and transmitting treadmill – woot.  Also, later this spring once the Scosche 24 starts shipping, you’ll be able to use that too for pace. 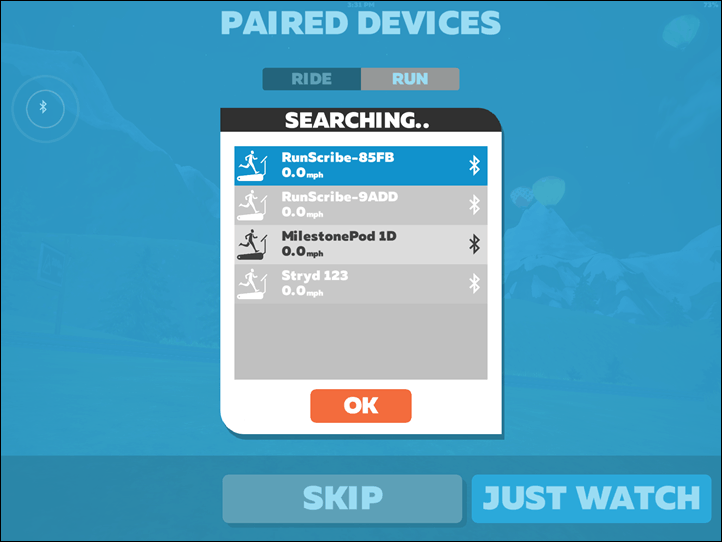 Next, you’ll pair up your heart rate strap.  This isn’t required of course, but many people do pair.  You’ll notice there is no method to pair or capture power readings today from footpods like Stryd or RunScribe on this panel. However, you can apparently pair power via the cycling screens and it’ll show up in recorded files later on (just not yet on the display). 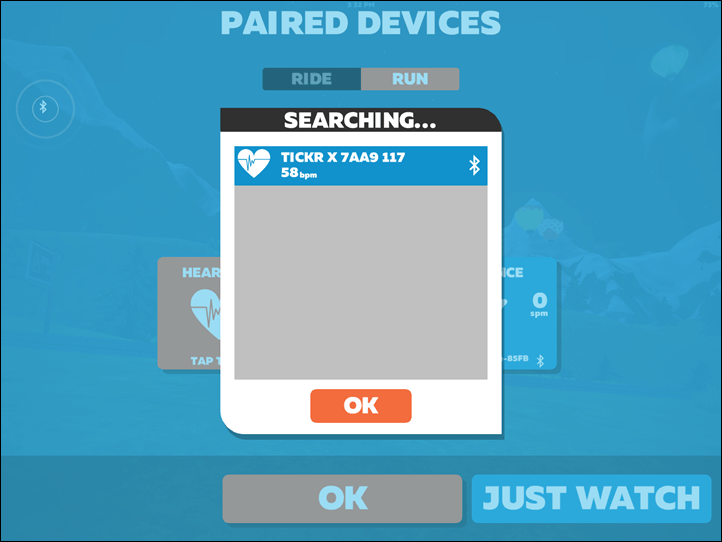 On the side of the paired speed sensor icon you’ll notice a little wrench.  This allows you to calibrate your footpod to your treadmill.  Of course, there is no guarantee that your treadmill is accurate, but at least they’ll match (in fact, more than likely if you’re not in your own home or a lab, your treadmill is probably inaccurate).  Still, everyone likes things that match.

The way it works is that you get up to speed at a speed of your choosing, and then run for 60 seconds. 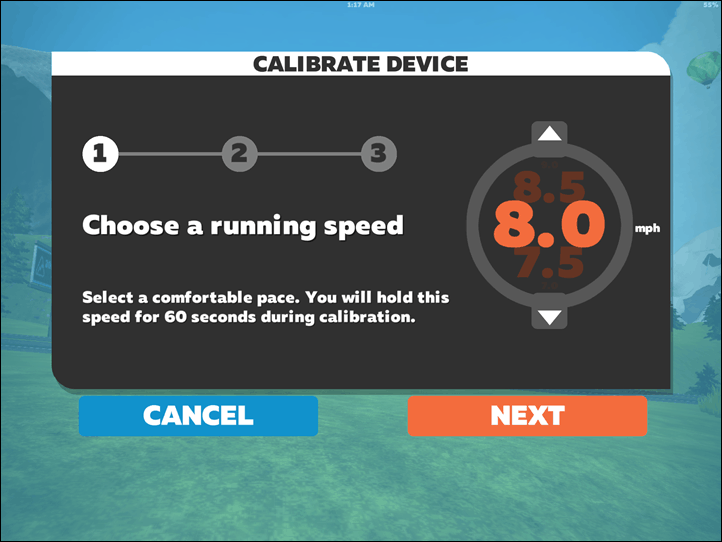 After which it’ll figure out how far the footpod thinks you went, and adjust accordingly.

With that all set you’ll land yourself back at the main screen where you can select the usual options like running with someone or a specific portion of the course.  You’ve also got events as well, as seen in the upper right-hand corner, just like with cycling. 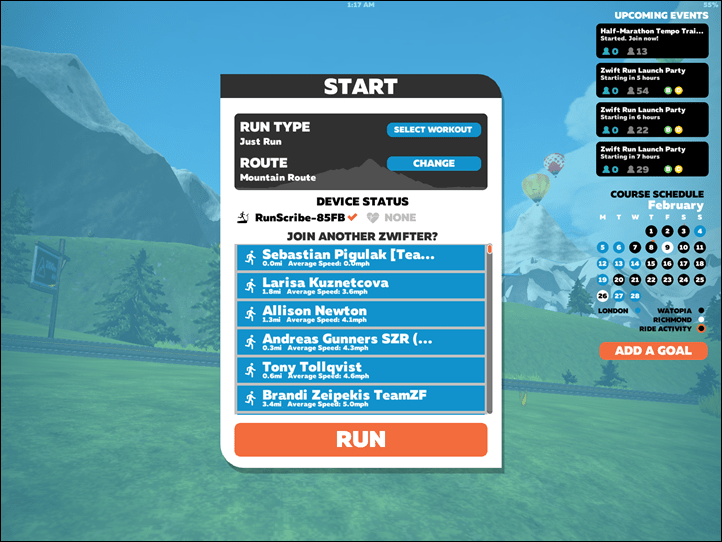 You can also select a given structured workout.  There aren’t really many of them, and honestly, even saying most of them are ‘structured’ is a bit of a stretch.  Still, if you had linked your Training Peaks account, then you can pull in structured workouts from there, so that is a bonus. 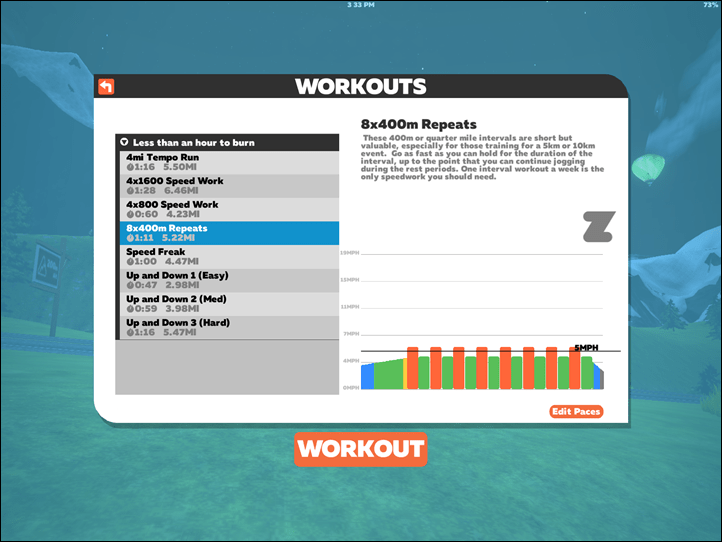 Finally, before we start it’s worth noting you can customize your digital runner dude (or dudette).  Right now the options are kinda slim, but expect to see more running-specific partnerships shortly. 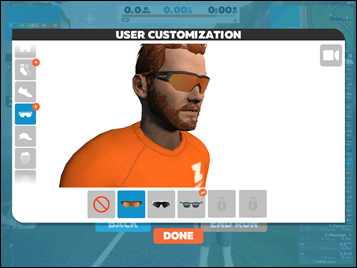 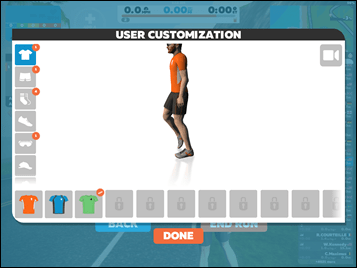 With your options all set, it’s time to start Zwift.  Just like in the past, you’ll be hanging out on the roadside ready to run.

Note that it’s highly unlikely you’ll see any treadmills change the speeds for you anytime soon.  There’s significant legal concern from treadmill companies around allowing any 3rd party apps automation to control treadmill speeds (upwards), since the concern is that if you couldn’t maintain that speed bad things might happen (fall off treadmill, face-plant, etc.).

In any event, as you run along you’ll see your pace and desired treadmill speed (if applicable in a workout) listed on the screen.  You’ll also see metrics like heart rate and cadence, as well as a graph at the bottom.  At this point, Zwift doesn’t support running power. If in a structured workout you’ll also see start and end finish banners for each segment, just like in cycling (it’s the bright neon thing).

Beyond that, everything else is largely the same.

Still, to get a complete feel for things – I take Zwift out for a spin…literally.  I go out on the real road with the thing, since running again on a treadmill was boring (I’ve done that before anyway). Oh, and The Peanut came along:

As you can see, overall it worked fairly well – especially given I was outside using cellular connectivity along the ocean to compete with people all around the world.  About the only screw-up was that I actually calibrated one footpod (RunScribe), but then inadvertently selected another (Milestone) for my run. That meant that either it had the wrong calibration factor, or none at all.  Either way, it was an ugly handicap as you saw (before I even layered wind, turns, stroller and so on).  Still, I had fun.  Not sure The Peanut did (she ran out of raisins early before we even got to the beach). 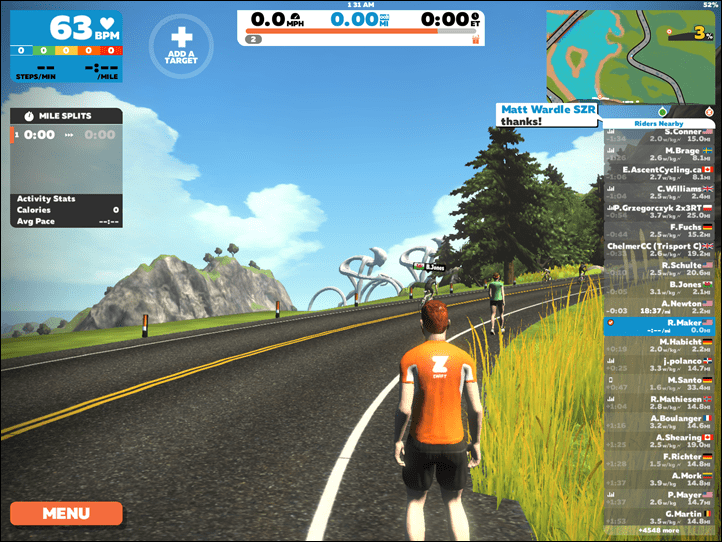 As I said in the video – the question here is whether Zwift can turn running on treadmills into even a fraction of the gamified training experience that cycling on indoor trainers is.  Initially, I suspect they’ll pick off the low-hanging fruit of people who might already be Zwift cyclists and happen to run at a gym or on their own home treadmill that they already own.

But I think it’s going to be a much more complex challenge to drive new sign-ups specifically for Zwift running, or to drive people to purchase treadmills for Zwift running.  Treadmills typically cost 3-5x the cost of a mid-range Zwift capable trainer (such as a KICKR SNAP, CycleOps Magnus, etc…), let alone the lower cost Zwift compatible trainers that are even cheaper still.  As for new running-specific sign-ups, Zwift will have to significantly look to build out their structured workout portion (training programs, etc…) beyond what it is today.

As Strava has long struggled with – running isn’t cycling.  People generally don’t compete on multiple segments within a run, and the same largely applies to Zwift.  It’s easy to throw down for a few fun competitive sprints for the line in cycling, but that’s very different in running where consistency is usually rewarded more greatly.  Not to mention it’s just simply easier to interact with the app and others in the game while seated on a bike, than it is while actively running.

But if Zwift can find a frequent user foothold in the market, then we might see treadmills start to cater their hardware to the app, which would likely alleviate some of the challenges of using Zwift while running.

Still, as with Zwift 2-3 years ago, it’ll certainly be fascinating to see not just Zwift grow from season to season, but also their competitors.  Zwift notes that the run portion of Zwift (called ‘Zwift Run’) will remain in beta for 2018, and as such, is actually free for those that want to try it out.  The cycling portion of Zwift still costs cash though.