Looking for the best sports tech deals for the holidays? Then check out the massive list of everything, from $150 off the Garmin Fenix 6, plus big deals on Apple, GoPro, Suunto, Polar, Samsung, Withings, and many more! Updated constantly!

Garmin’s Running Dynamics Pod (RD Pod): Everything you ever wanted to know 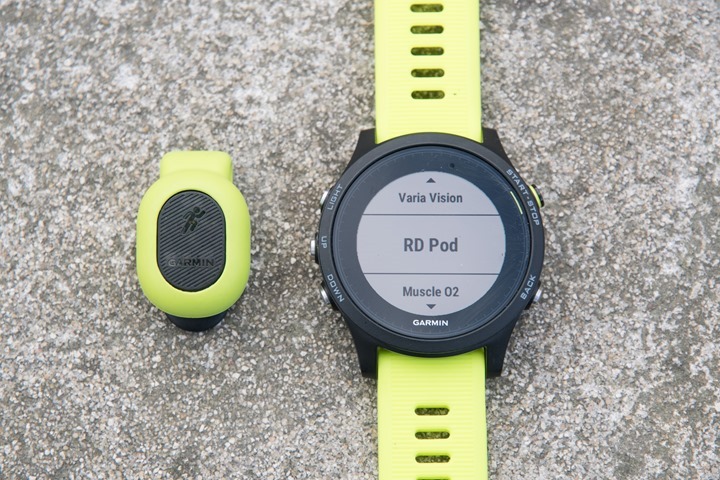 Today Garmin announced a new accessory alongside the Forerunner 935, the Running Dynamics Pod.  This tiny pod, about the size of a piece of small candy, essentially provides the existing Running Dynamics data (i.e. Vertical Oscillation/Ground Contact Time) that normally comes from the HRM-TRI/HRM-RUN units.  All while doing so in something not much bigger than a peanut.

I’ve been using one for about a month, so plenty of time to sort through the ins and outs of it.  This post covers everything you’d possibly want to know about it, and then a lot more you didn’t want to know about it.  By the same token, it doesn’t have a ton of functions, so I’m going to attempt to keep things as brief as you might expect around here.  So only about 30-40 pages or so.

Oh, and like usual, I’ll send back the little yellow loaner RD Pod to Garmin once done with it for this post.  Just the way I roll.  Haven’t quite decided the most economical way to mail it back.  Perhaps I’ll just put it inside a the Peanut M&M’s bag and stick some stamps on it.  That should work, right? 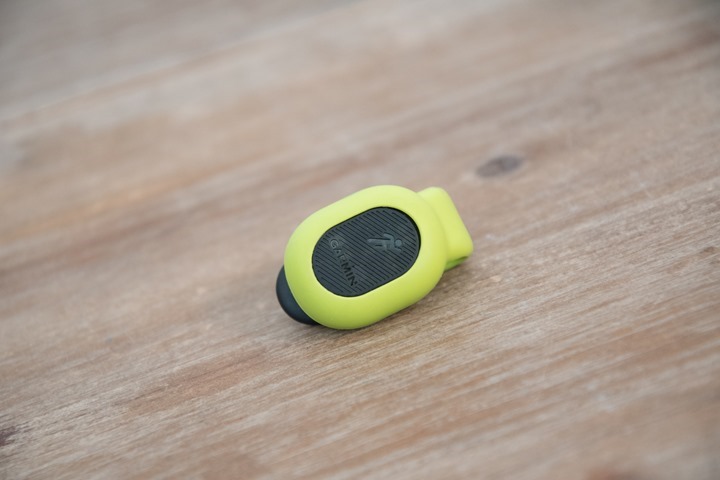 Most importantly, before tech, let’s talk size.  If for no other reason than I have a bag of candy.  I mean, bags of candy, sitting around.

The RD pod is small.  Smaller than a Garmin footpod for example.  In fact, it’s so small that it doesn’t take a CR2032 coin cell battery like almost every other ANT+ device on this planet. Instead, it takes a CR1632 coin cell battery. 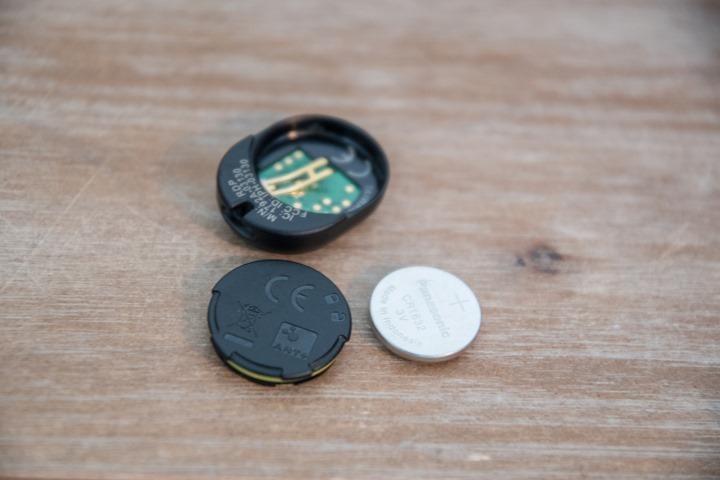 But how big is the unit?  Well, I set out to the grocery store to find something to compare it to.  A pile of candy bags later, I figured I had some valid comparison options that folks can find the world around. 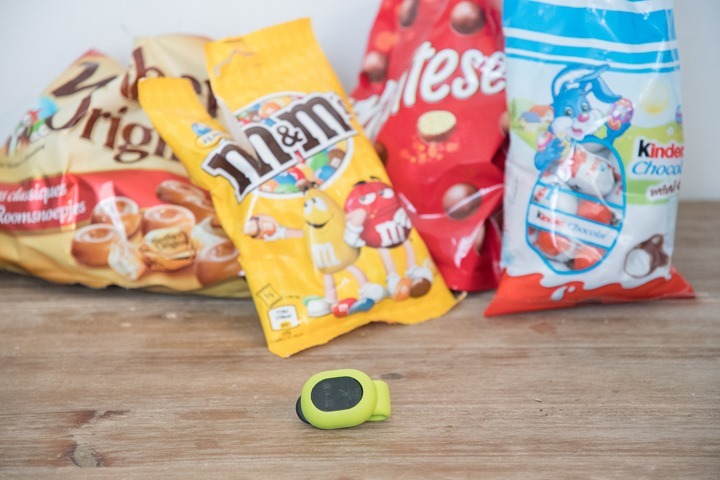 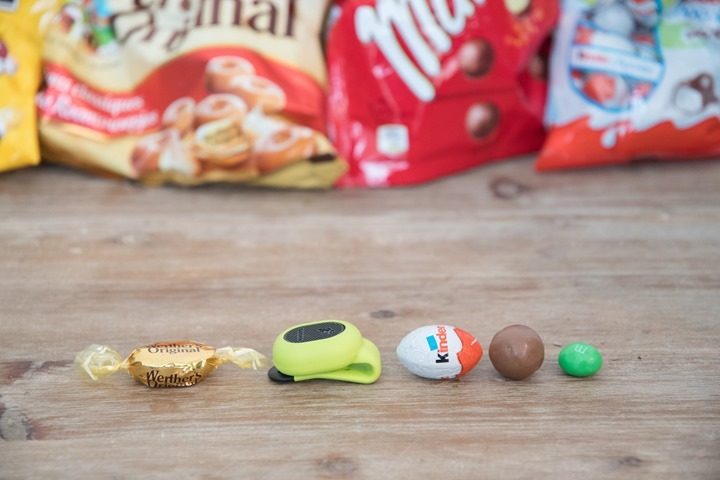 However, it’s actually almost identical to that of the Werther’s Original candy, once you remove the wrapper. 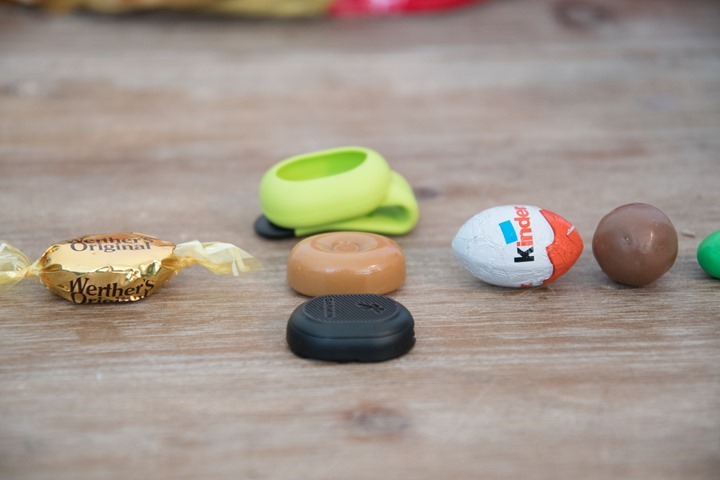 In fact, it’s so identical that you can swap the pod inside the little pod holder for a piece of candy.  They both fit perfectly. 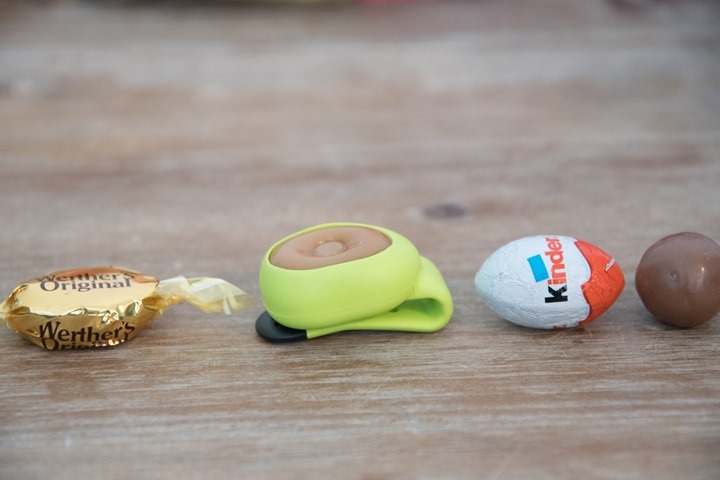 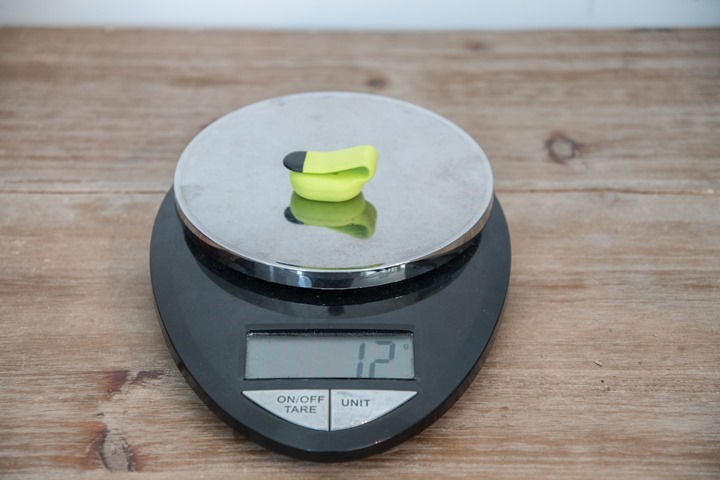 As you probably ascertained from the earlier photo of the candy inside the pod clip, the pod does fit inside a small rubber clip.  Thus how it attaches to your person.  Assuming you’re the person. 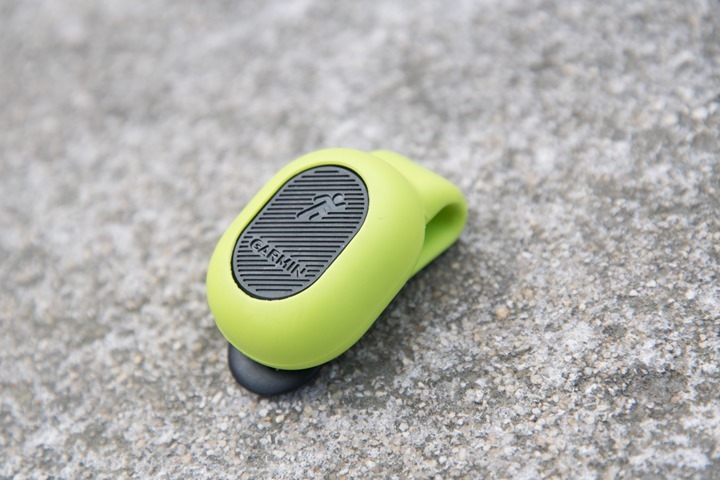 So the purpose of the pod is to replace the data given by your HRM-TRI or HRM-RUN straps.  Or rather more specifically, the Running Dynamics data from those devices.  The idea behind it is with the rise of optical HR sensors, it seemed silly to keep requiring people to buy HR straps – creating duplication.  Yet, that was the case for anyone that wanted the additional data.  That data can’t be obtained from the wrist because it depends on having a more balanced center-point.  Or at least something that’s not swinging around in the wind as you wave at that hot guy or gal across the street.

So the pod clips to the back of your running shorts, in many ways like the initial prototype Stryd Running Power Meter did, or, how the Lumo pod does.  It does NOT clip to your running shoes.  It is NOT a footpod.  Nor, is it a candy to eat (a mistake I almost made a moment ago while eating some of those Maltesers in a small pile next to my laptop).

The device has an accelerometer inside, just like the HRM-TRI/HRM-RUN straps did.  With that accelerometer it’s able to measure the following metrics:

Like the HRM-TRI/HRM-RUN, it does *not* measure pace.  Unlike those straps though, it doesn’t measure your heart rate (seems obvious, but I figured I’d mention it).  Note that your Garmin wearable already measures cadence via the wrist, so this is doubling down on that.  It provides what is generally considered higher fidelity cadence data (like a footpod would), since it’s not prone to errors based on wrist movement (i.e. holding a water bottle or a camera). 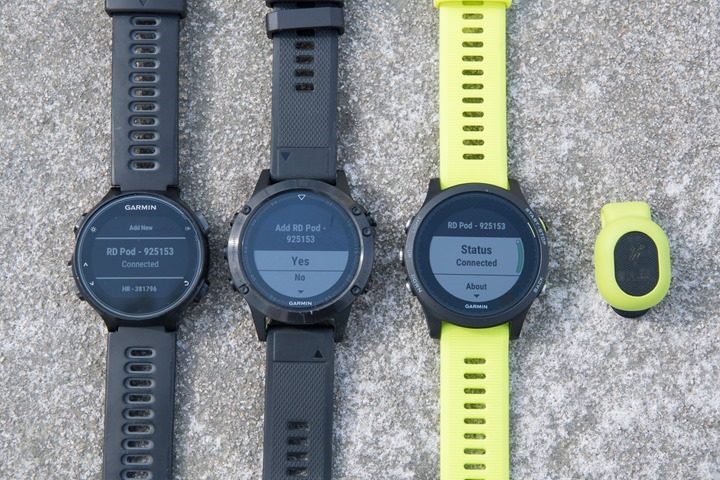 While the RD pod was announced today in conjunction with the FR935, it’s actually compatible with a few units.  At this time these are as follows:

The most obvious missing watch from the above would be the Fenix 3/3HR series.  Personally, I think that’s a pretty big omission.  And even more, I think Garmin is just leaving free money on the table there.  People that would have bought a Fenix 3/3HR in the last year aren’t likely to buy a new watch.  But they are likely to splurge on a $69 pod like this.

I can certainly see the logic in skipping something like the FR630 – since that hasn’t had updates in a while, but the others seem odd omissions.  Hopefully, they’ll change their mind.

Note that it’s definitely not going to be compatible with watches that never did Running Dynamics data to begin with (i.e. the FR230/235/Vivoactive HR/etc…).  But, I think for relatively recent watches that already support Running Dynamics, it’d be a pretty easy addition for the company.

When it comes to using the pod, you’ll pair it in the sensors menu like any other sensors.  In the case of the FR935 today, it shows ‘RD Pod’ as a sensor type.  The Fenix 5 will shortly as well (next few days), as well the FR735XT. 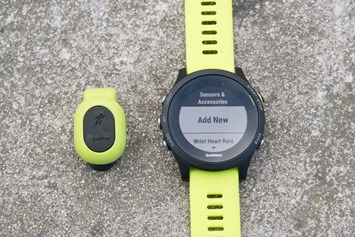 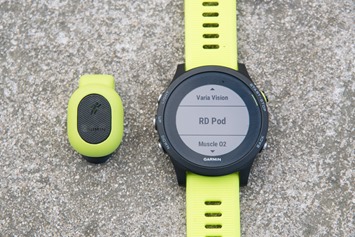 However interestingly, with the FR735XT it’ll actually find the RD automatically if you go into the sensors menu.  It’s just sneaky about it right now. 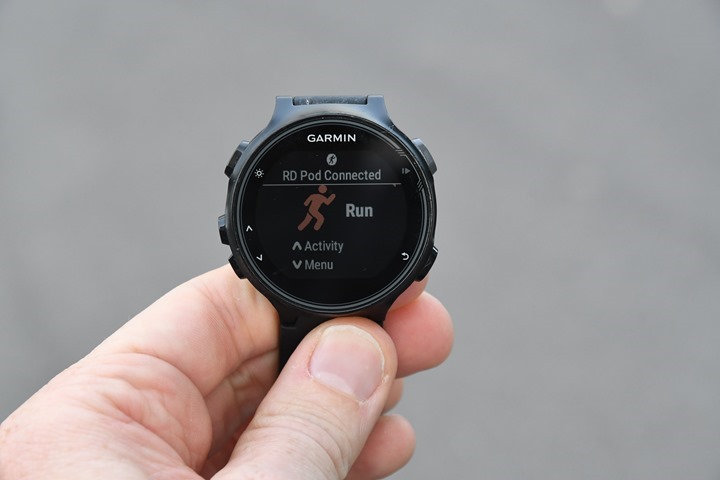 Once paired, the sensor doesn’t have any other options beyond showing up. 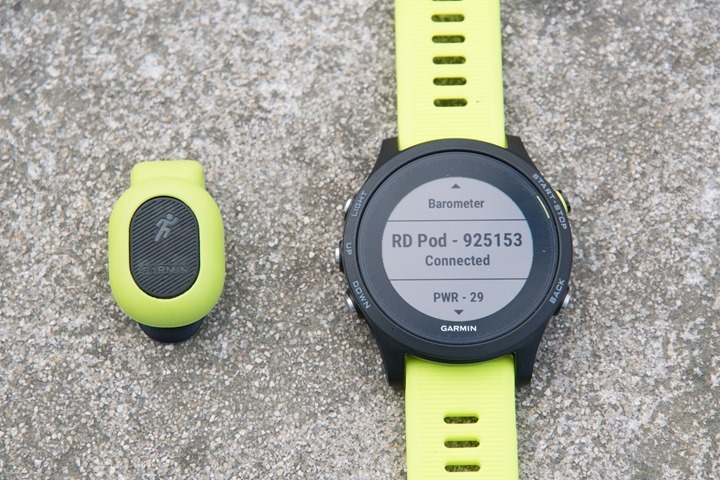 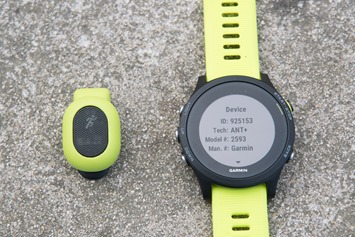 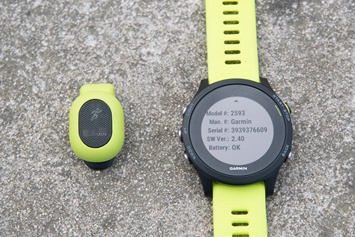 The watch will let you know it found the pod at the start of a session, just as it would any other sensor. 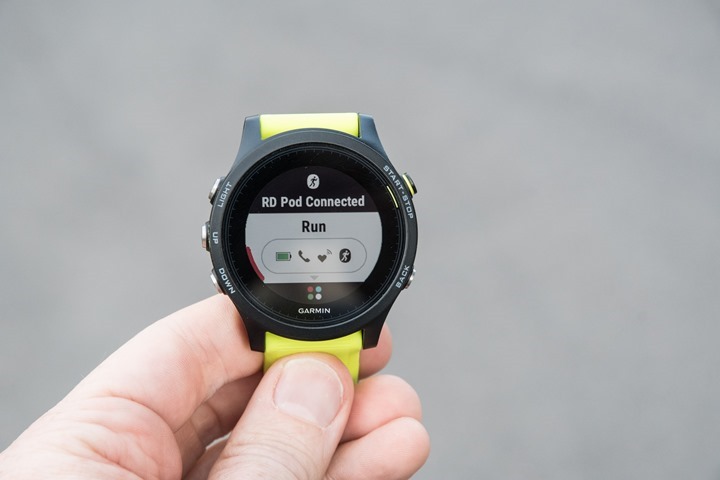 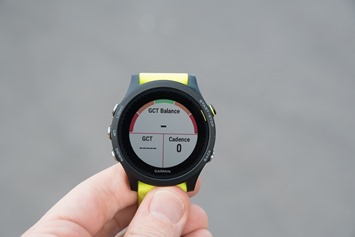 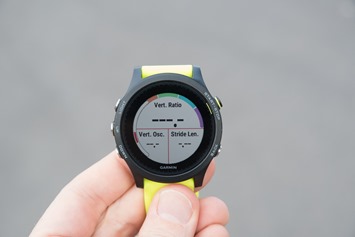 And afterwards you’ll get summary data including metrics like Ground Contact Time and Vertical Oscillation.  However, my favorite part is actually the little message you’ll get after you’ve saved and closed out your run. 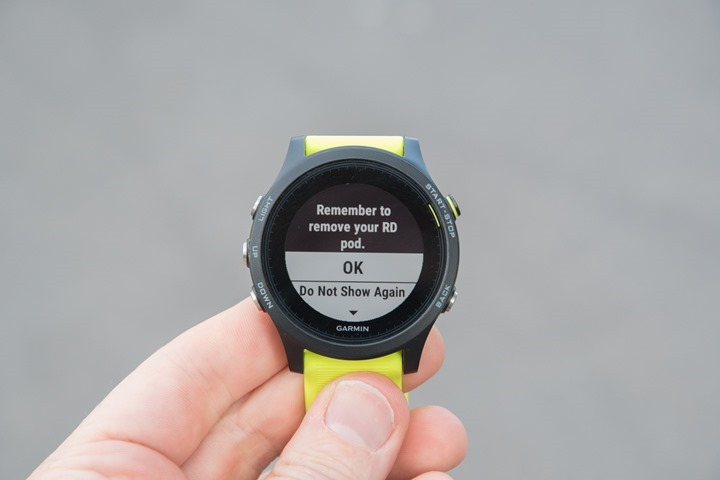 This handy little reminder keeps you from accidentally sending the pod through the washing machine.  While I’m sure it’d have no issues there, it’s the dryer that tends to be more problematic (if using very high heat).  The unit is waterproofed though, so it’s just a matter of whether or not the heat is too high to do damage.

A pro tip on the pod: When it gives you that message?  Simply connect it to your shoe laces.  That way next time you run and you see the ‘RD Pod Connected’ message, you know to reach down and stick it on your shoes.  If you forget – don’t worry, the clasp is strong enough it won’t likely fall off.

Ok, so you’ve gone out and done a run – what’s the data look like?  In a nutshell, exactly like that of the Running Dynamics previously.  If you crack open your activity on Garmin Connect, you can see how the data appears.  Here’s a recent run of mine if you want to poke around (FR935 with RD Pod).  Here’s what the full activity looks like first: 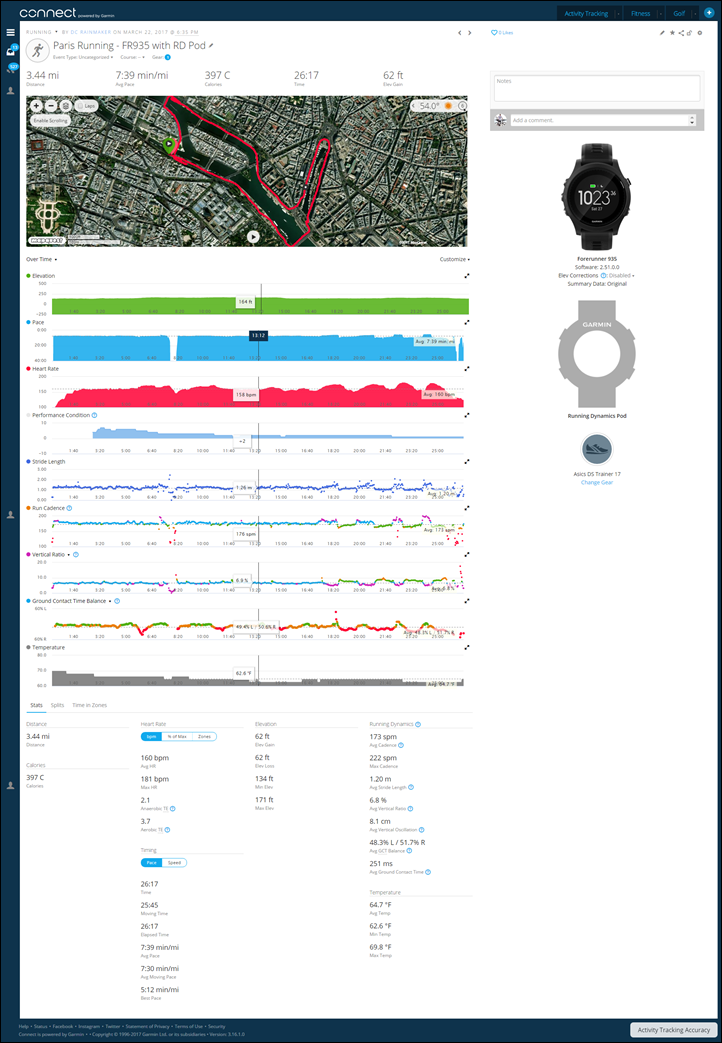 Ok, but the parts with the RD part are actually a bit more specific, they’re these sections here:

And again remember cadence does come from the RD pod, but it also comes from the wrist.  In this case, the RD pod takes priority.

You can also zoom in on these stats if you’d like, such as the GCT balance stats.  And within that you can add in overlays (other data fields).  For example, below I added cadence and heart rate:

The above makes it super clear that as I increase intensity (which is pace in this case on a flat course), that it tweaks my running cadence (higher), and that in turn changes GCT.  Note that I’m using HR in the chart above rather than pace, simply because the HR data looks prettier.  Pace is technically the correct field to compare against.

Finally, at the bottom of the activity in the summary section you’ll get the averages.  I’ve highlighted in yellow the specific fields that come from the RD pod (or the HRM-RUN/HRM-TRI).

Now, how does this compare against data from the HRM-TRI or HRM-RUN straps?  Glad you asked, let’s move onto the next section. 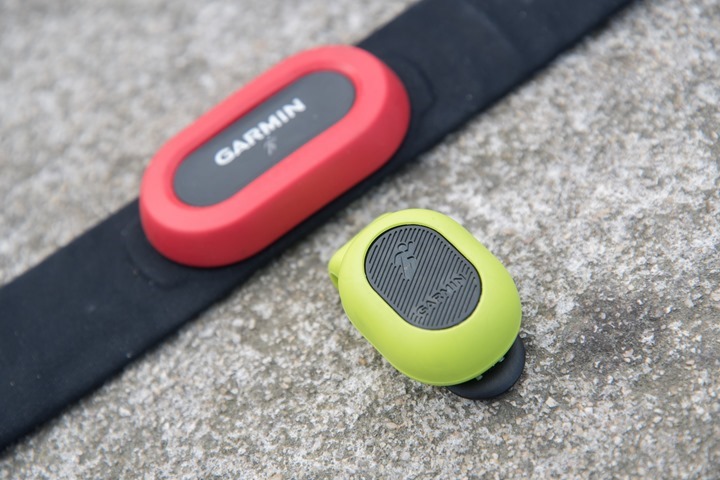 I went ahead and put together a full video showing from start to finish how the RD pod works, inclusive of about a 6-8 minute long analysis section doing side by side comparisons of data from the same run.  One recorded with the RD pod, and one recorded using the HRM-RUN/HRM-TRI straps.  It’s like the Running Dynamics Battle Royale!

Oh, and in case you want to play around with the data yourself – here’s the files from that run (use the download link on that page).  Or you can play with them on Garmin Connect instead. FR935/RD pod here, Fenix5/HRM-RUN here.  Do be careful on the Fenix5 one that you’re looking at the Garmin Running Dynamics metrics graphs, and not the Stryd running dynamics metrics graphs (they have a little ‘IQ’ next to them).  Two different sensors! 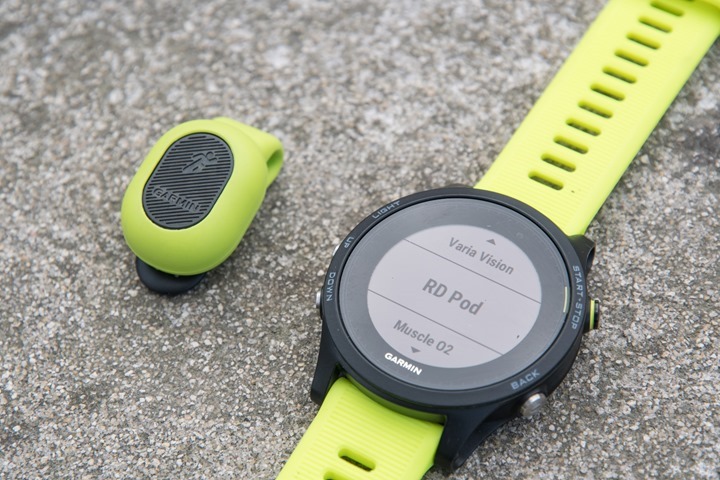 Meaning, it works perfectly fine and does 100% exactly what it set out to do.  It also does so in a really tiny package that no longer requires you to wear a heart rate strap.  For a bunch of people – they’ll be really happy about that.  And the metrics largely seem to align between the existing straps and the new pod.  Not precisely spot-on the same, but I suppose that’s somewhat to be expected since they are measuring in slightly different places.  But they measure far closer than units I tested in the running efficiency post last month.  So that’s good news.

So don’t take this the wrong way – if what you’re after is Running Dynamics data, then this absolutely delivers.  It’s just for me, it’s not something I have a lot of clarity on what to do with.  So, I generally don’t put a lot of emphasis on it.  And as such, I have less excitement over.  No different than someone giving me a piece of cardboard versus a cookie.  I know which one I prefer. Oh, and Peanut M&M’s.

In any case – with that – thanks for reading!

If you're shopping for the Garmin RD Pod (Running Dynamics Pod) or any other accessory items, please consider using the affiliate links below! As an Amazon Associate I earn from qualifying purchases. It doesn’t cost you anything extra, but your purchases help support this website a lot. Thanks! 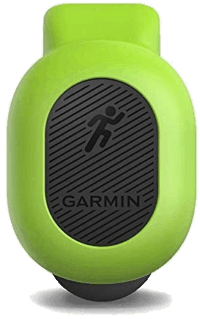 And of course – you can always sign-up to be a DCR Supporter! That gets you an ad-free DCR, and also makes you awesome. And being awesome is what it’s all about!