It was a whirlwind weekend, largely because I spent much of it on an airplane.  So since the weekend technically extends till Monday here in France, I’m going to go the other direction and encapsulate the end of last week instead. I’m treating it as my weekend…mostly because it was more interesting than sitting on a plane for many hours.

While in San Diego I rented a bike to sneak in a ride.  I should preface that had I realized I’d have been there a week, I would have likely rented a bike earlier to use more often.  But initially we were only planning on being there a few days, but after the first few days we ended up changing our tickets to add four additional days.  Woot!

In any case, I headed out for a single ride by creating a loop through some areas of town I wanted to see.  Most notably Mission Bay, up to La Jolla, and then back down along the coast and through Point Loma.  I was somewhat time limited on the ride, so it’s what I came up with. 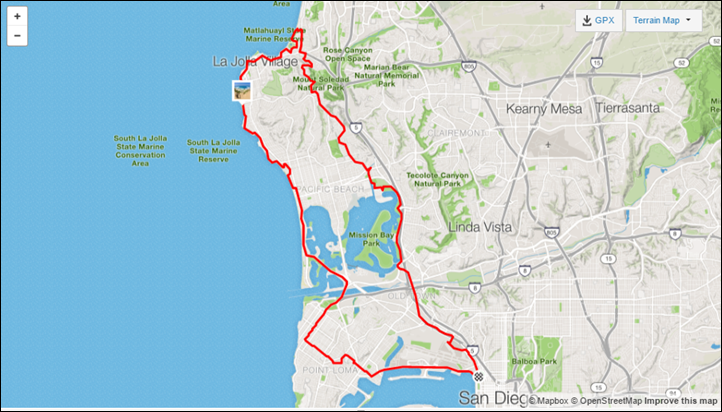 The route was great though, and I got to check out some pretty sweet areas of San Diego. 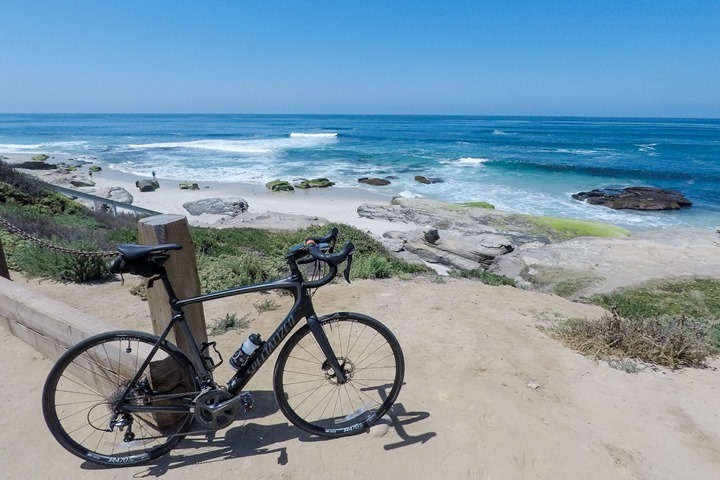 From the tech side, I was using the Stages Dash (in beta), Edge 820, Suunto Spartan Wrist HR, and Fitbit Alta HR.  As usual, also using my PowerTap P1 pedals.  Plus I’m sure other stuff I’m forgetting…oh, like the GoPro Hero5 Black for this photo.  I realize I often forget to include the tech details of what I use, so…there ya have it. 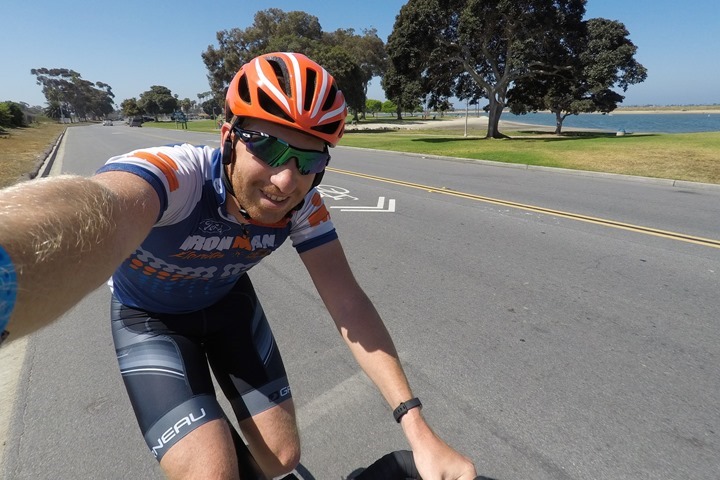 Of course, there’s tons of great riding elsewhere in the San Diego area, but for someone staying downtown who didn’t really want to drive elsewhere first, this worked out great.

After the ride, I quickly cleaned up and headed out with The Peanut and The Girl to catch a baseball game watching the San Diego Padres.  I grew up in a huge baseball family, and we often caught games as kids (growing up in Seattle).

One of my favorite parts though of going to a baseball game is actually exploring the stadiums and seeing the game from different spots.  This is especially true of newer stadiums, like Safeco Field in Seattle and Petco Park in San Diego.  Both offer lots of interesting and unique perspectives that you can usually wander freely to.  For example bars and restaurants on the edge of the field.

That’s especially true of San Diego which has a gigantic grassed hill beyond the center field wall that folks can hang out on.  It was packed with families like ours – enabling the little ones to wander around while we still watch the game (or eat pulled pork BBQ sandwiches).

After that, we headed up to the higher upper decks to find some empty seats and watch from there. 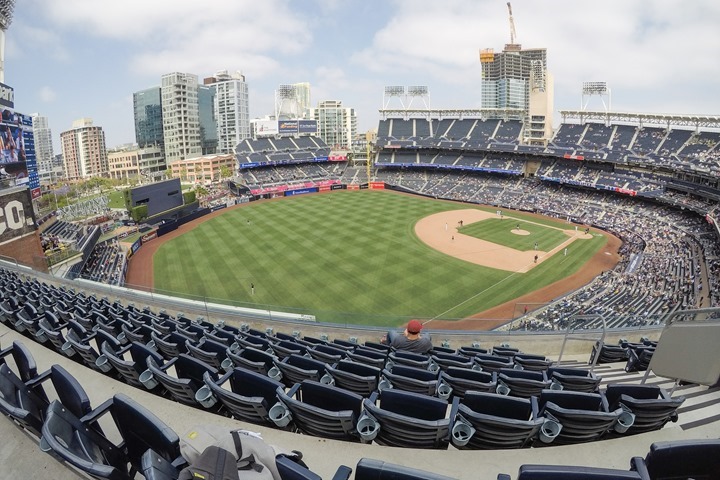 In thinking about it, we never went to our actual seats, though, given how cheap they were – it didn’t much matter. All the other places I was able to watch the game from were likely better.

As is usually the case, I pick up a few pieces of new gear while in the US.  One thing I’ve been meaning to pick up for a while is a new secondary camera for unboxing videos.  I use my Nikon D500 DX as my primary camera, shooting in 4K (oh, here’s all my camera gear).  But then I use a ceiling mounted small mirror-less camera for the close-up unboxing shots.  That works well enough, but the camera is probably 4-5 years old and doesn’t shoot 4K.  That means that while I have been exporting in 4K, the upper cam shots have been 1080p.

Since that upper mounted camera doesn’t really need to be all that fancy, I just went with this 4K capable unit from Panasonic, the G7.  It’s actually well-liked by many on YouTube for vlogging, and indeed works great (and was $100 cheaper last week when I bought it).  I used it a bit in San Diego as a still camera as well as a few quick test videos before throwing away the packaging. Good stuff. 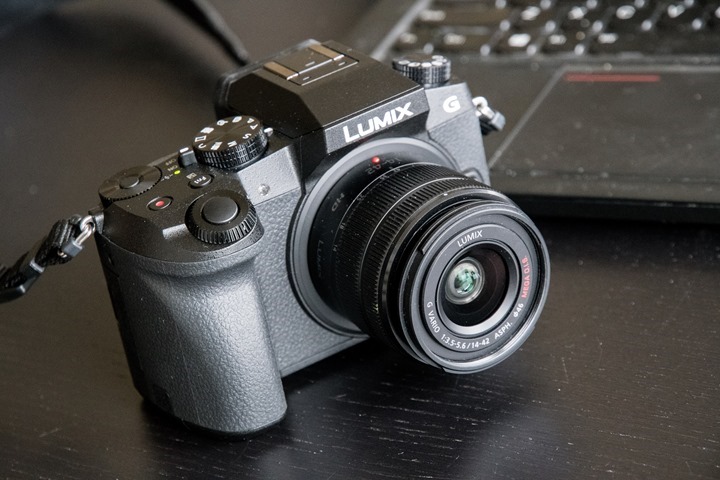 I also bought the El Grande pole from GoPro after seeing that Abe had used it in conjunction with the Karma Grip gimbal. One of the challenges with most extenders/sticks is the lack of strength to hold a gimbal (especially a beast like the Karma Grip), so this solves that issue nicely. 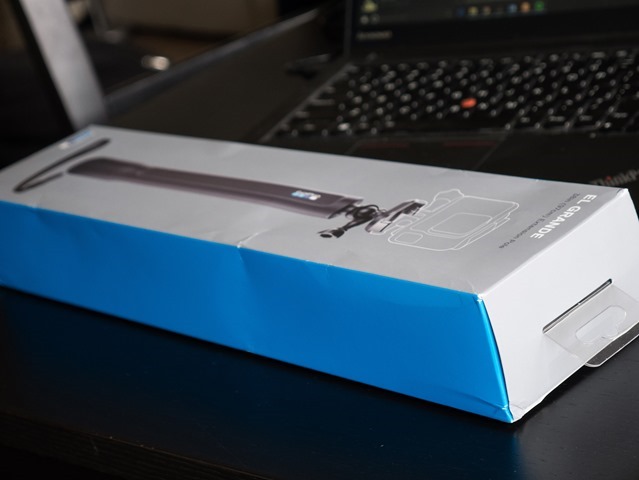 Oh and finally, I also got this. Because…everyone likes smooth moves and my previous smooth move generator was crap.

We spent all day Saturday, and a fair chunk of Sunday getting back to France from the states.  Despite how many times I’ve transited San Francisco International Airport over the last few years, I’ve never once passed ‘San Francycle’, a cycling apparel shop within the terminal.  It’s in the newer/renovated section that United occupies (all of my flights via SFO have been on United), but for whatever reason almost all of my flights have been in and out of the international as well as older domestic portion.  Go figure. 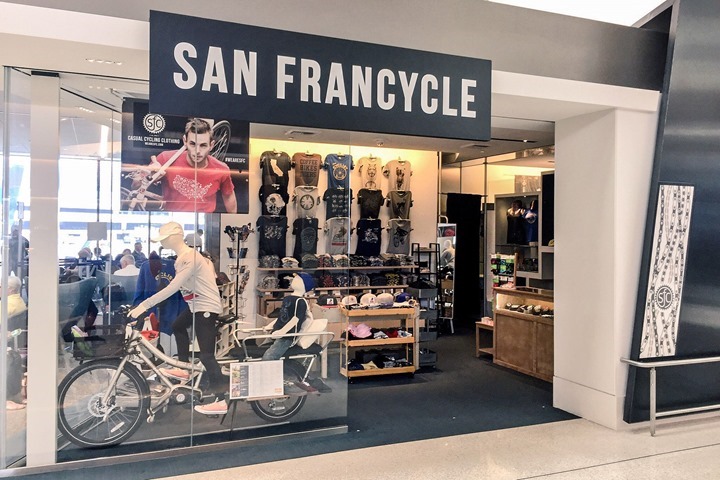 In any case, since we had a fairly long layover (even before the delays), we spent some time in there.  When all was said and done each of us (me, The Girl, and The Peanut) had a new cycling t-shirt.  The Peanut plans to debut hers during her cycling trip this June in the Netherlands (more on that in the most recent newsletter that you should sign-up for). 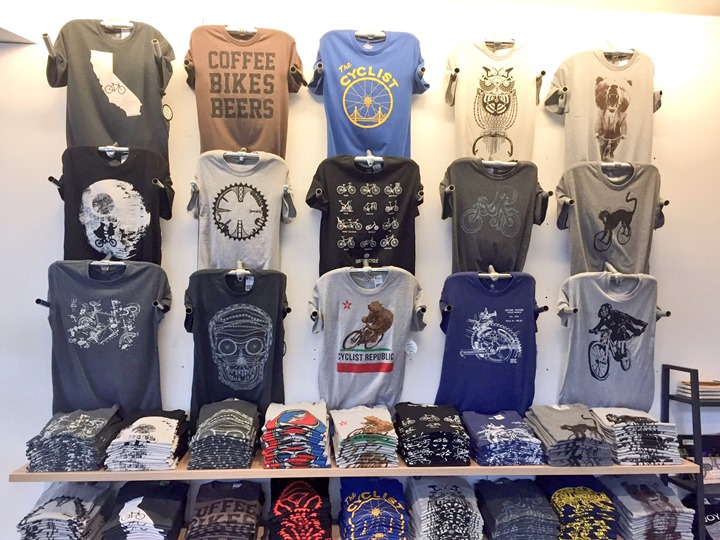 Still, as I commented on Twitter, I can’t seem to find any shops that carry cool t-shirts and stuff for running. Aside from the 89 variants of ‘If I’ve collapsed, someone pause my Garmin’, there’s virtually nothing out there like these in the running realm.

After our purchases we spent time just…well…burning time.  Lots and lots of time. 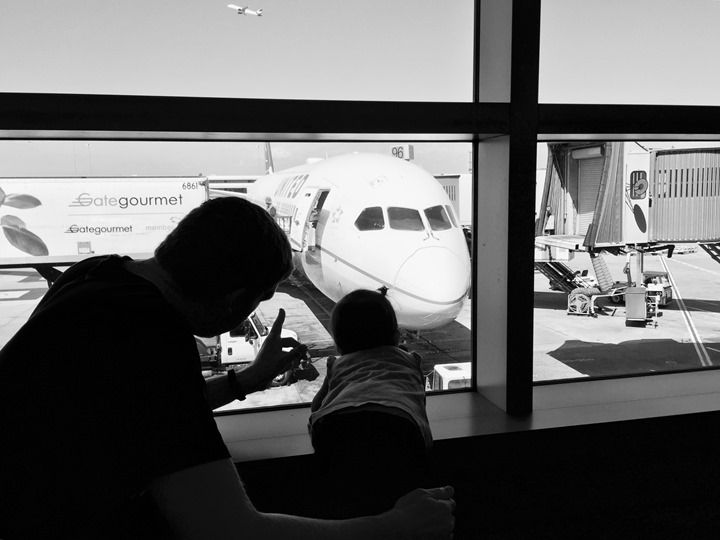 And then eventually, a dozen+ hours later we landed in rainy France on election day.

After a quick shuttle ride home we ditched the mountain of luggage and were back out the door in under 10 minutes.  Off to a birthday party that we were most definitely late for (due to our delayed departure in San Francisco).  It was a 1st birthday party for one of our (and The Peanut’s friends). 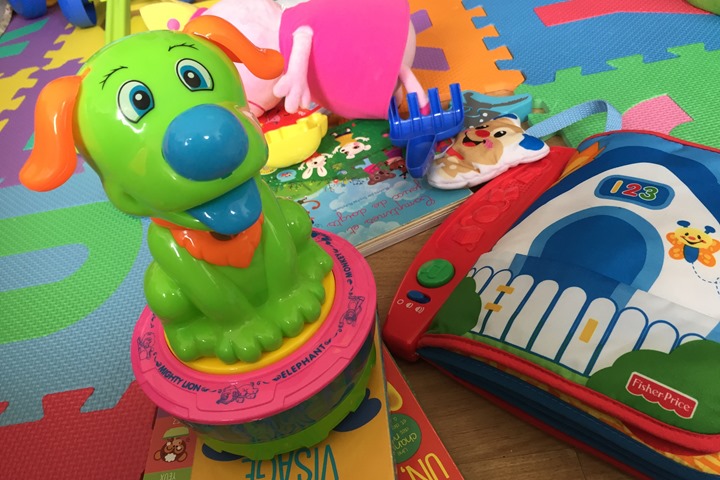 I don’t remember much from the party.  With only 20-30 minutes of sleep on the flight, I was a bit foggy.  Though, I remember eating some cake that was good. So…woot!