Just a few weekends left in the year before things get crazy in January!  Here’s what we were up to over the last couple days.

First up on the weekend was a multi-part test, this one involving three different units I was looking to get power meter numbers on.  And along the way I’d also get in a ride. Or at least as long a ride as The Peanut would allow before meltdown. 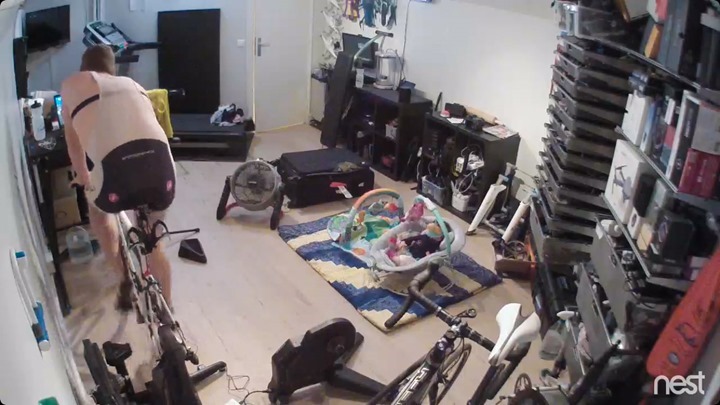 I was on the new CycleOps Hammer, within Zwift.  I had swapped out my previously installed 11-speed cassette, to be able to run it with my 10-speed enabled Cervelo P3C (my road bike uses an 11-speed).  Now I don’t necessarily worry about swapping cassettes for ERG mode (where shifting is unnecessary), I was in regular Zwift mode where you’re shifting a bunch – so I didn’t want to hear the misaligned gearing. 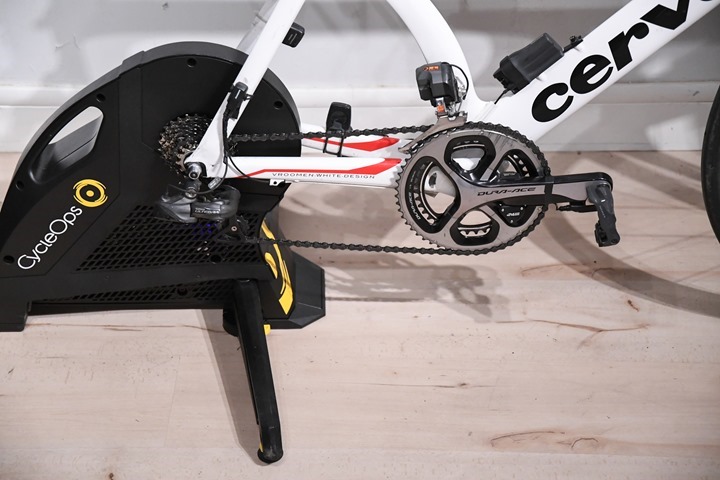 I wanted to use the P3C this day because it had both the 4iiii Precision dual system on it, as well as the newly installed WatTeam system on it.  You’ll remember that WatTeam released their product almost a year ago, only to have it recalled in early Spring 2016 due to accuracy issues.

They arrived at the DCR Cave this past week to walk through the install with me on not one, but two crank sets.  One of which is on the bike currently. 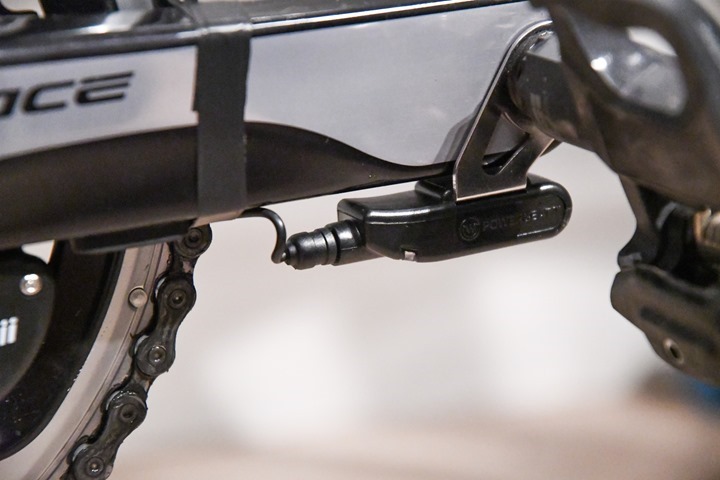 For those curious, I dive into the data pieces down below.  Meanwhile, the Hammer did well for me.  I need to cleanup my drivetrain a bit on this bike, as well as figure out why something in the bottom bracket (of my P3C) is making noise all of a sudden.  But otherwise no obvious issues on Zwift with the Hammer yet.  I didn’t quite get to ride as long as I wanted, as The Peanut began her meltdown at 27 minutes in, which concluded my ride around the 30 minute marker.

Win some, lose some.

2) Riding to the hills and back

Saturday late morning I headed out for a bit of a wander.  Nothing too long, but just fitting it in between some other things we had planned.  I started off by heading towards Versailles and rode up the nice cobbled climb to the Forêt Domaniale de Meudon. 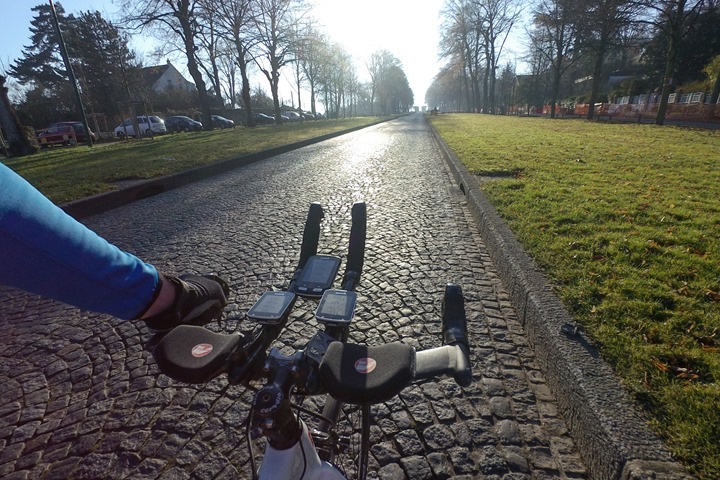 From there I did a short bit of video/photo stuff while riding along the flats, before coming back down the hill to the river. I then stayed along the river for a while before eventually crossing over and briefly touching the loop at Longchamp.

However I left that behind while I crossed the Bois de Boulogne, which was closed to traffic at the time, enjoying empty roads to ride across. 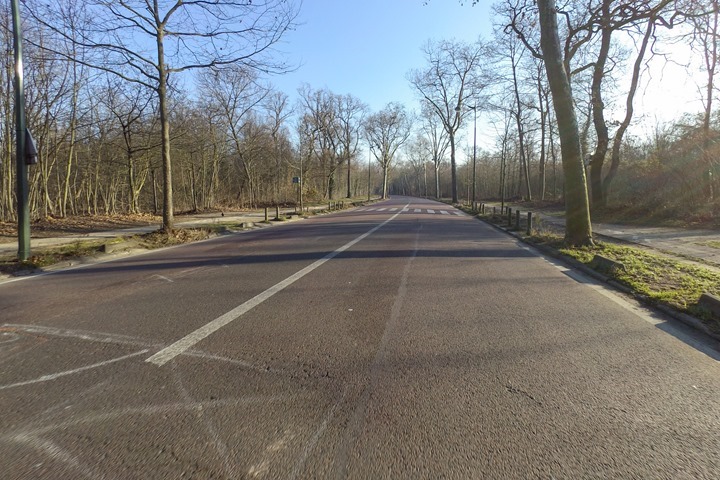 Then it was up to the Arc de Triomphe, to make my way across the city: 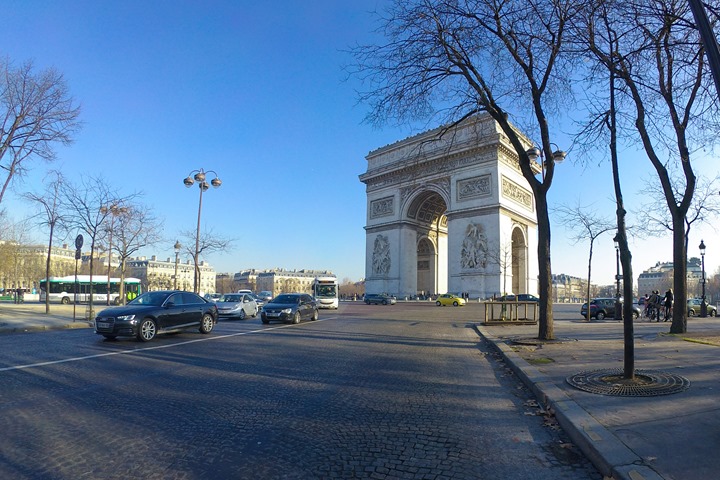 While riding a triathlon/TT bike down the Champs-Élysées in busy traffic isn’t exactly the most ideal of scenarios, it was the quickest way back.  I had to be back by 12:30PM, and this was pretty much the one way to do it. 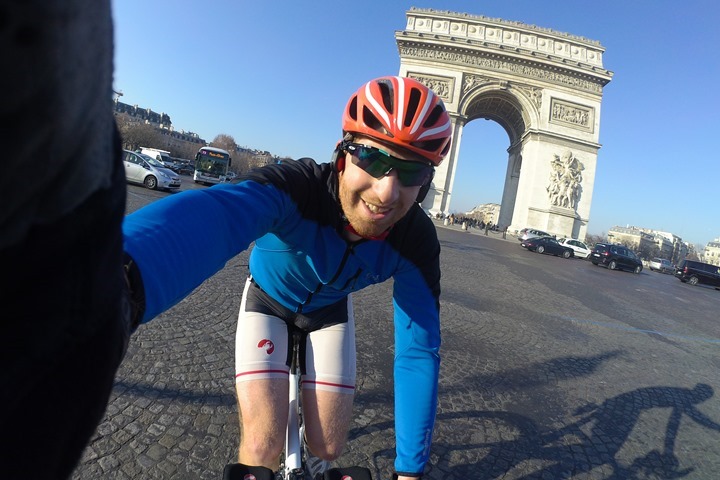 I was happy to note that I arrived back at 12:29PM.  Perfect timing!

After my ride we decided to make a long walk out of things across town.  With numerous Christmas markets setup, we’d kinda bar-hop our way from café to Christmas markets, and park to park.  First up was Luxembourg Gardens, just up the hill: 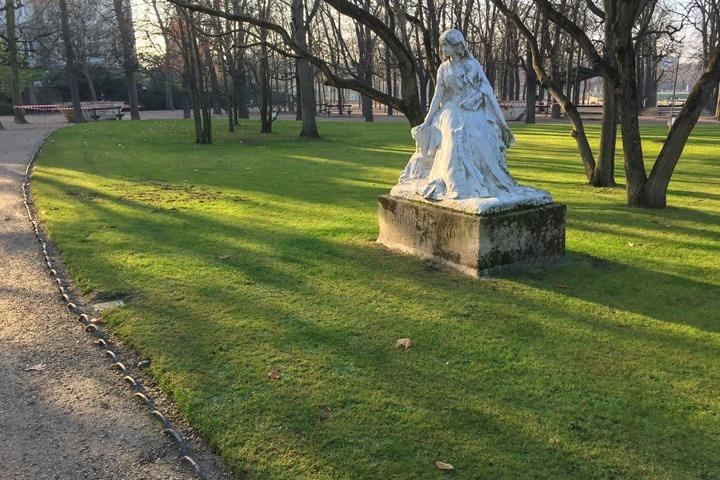 It was surprising how desolate things were both in the park (for a Saturday) as well as across the city.  But many Parisians/French have left the city for holiday vacations now, so it’s kinda like August, but with the tourists also gone. 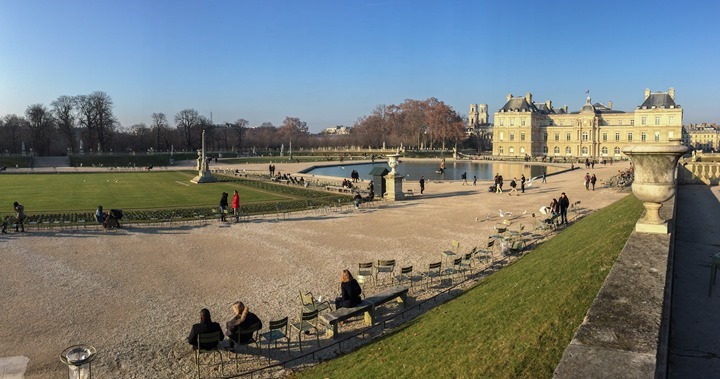 Next we hit up Angelina for some hot chocolate.  Can never go wrong there, and even better when there wasn’t a single person in line, and only one other person in the entire café! 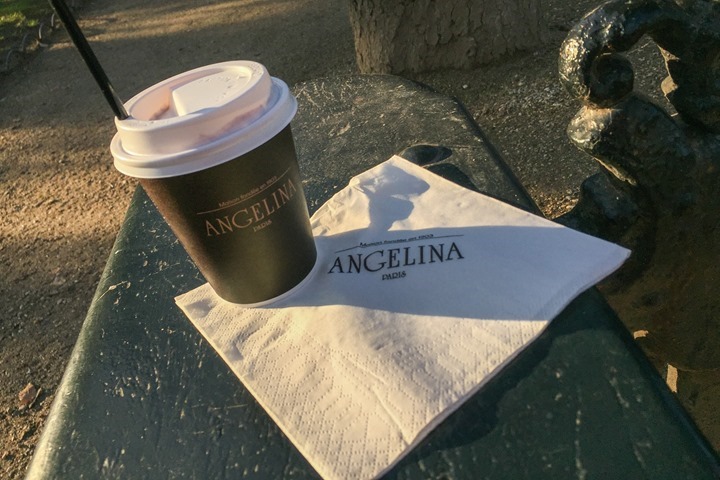 From there we headed a few blocks away to a small café/bar to get a glass of wine.  Like I said, bar hoping with a baby. 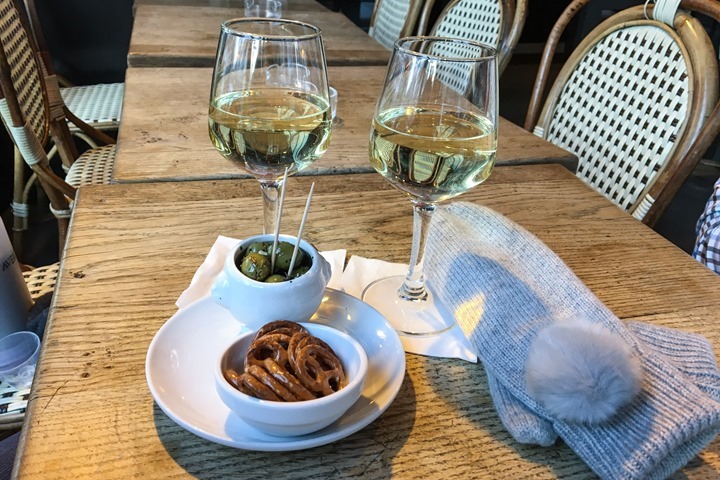 Then another dozen or so blocks to check out some goats on the lawns leading up to Invalides. 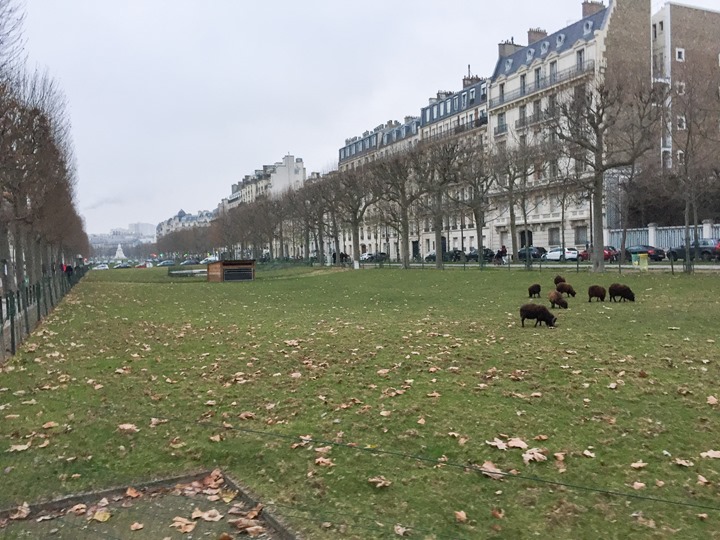 Ironically, this is exactly where one of the apartments we looked at years ago when we first moved over here (Remember my ‘House Hunters’ posts?  Though this particular apartment never made the series). 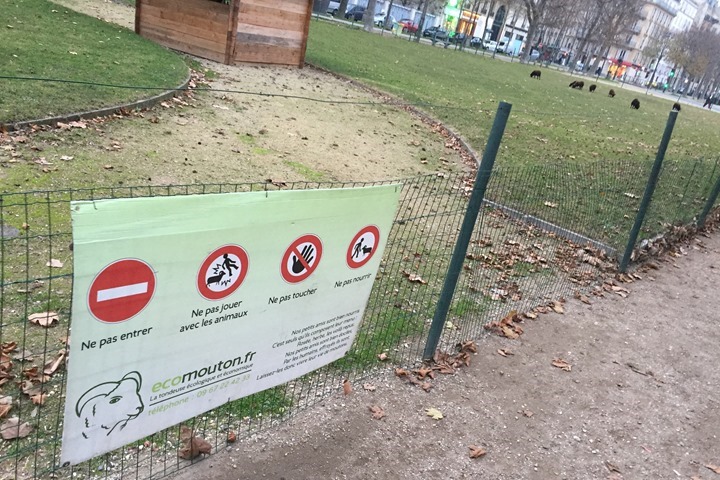 After that it was off to the Christmas Markets at Les Invalides.  They were fairly small, and definitely focused more on tourists than locals.  What hurt these markets is that you had to go through security to get to them, versus most others are just open.  This is because it was actually on the grounds of Invalides, versus just being a typical market in a small park/street area. 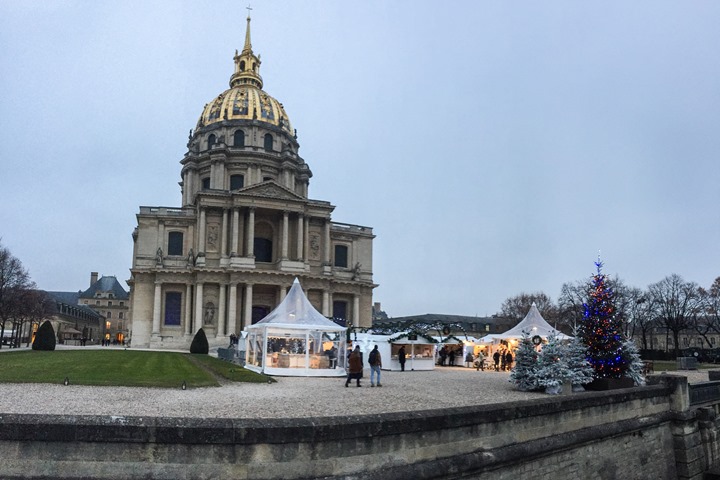 After wrapping up there we finally worked our way back home, albeit without any more stops.

Next up on the list after getting back home was consolidating the data from the past few days of riding with the WatTeam unit.  First up was getting the trainer data, and then the outdoor data loaded into the DCR Analyzer.  In my case, I was using three different systems for this.

First was the 3 x Garmin Edge devices (520/1000).  Second was a WASP collecting data.  And third was the Quarq Qollector acting as backup.  Though, it’s only writing one power meter channel, so I was just using it as a backup for the WatTeam data at the moment. 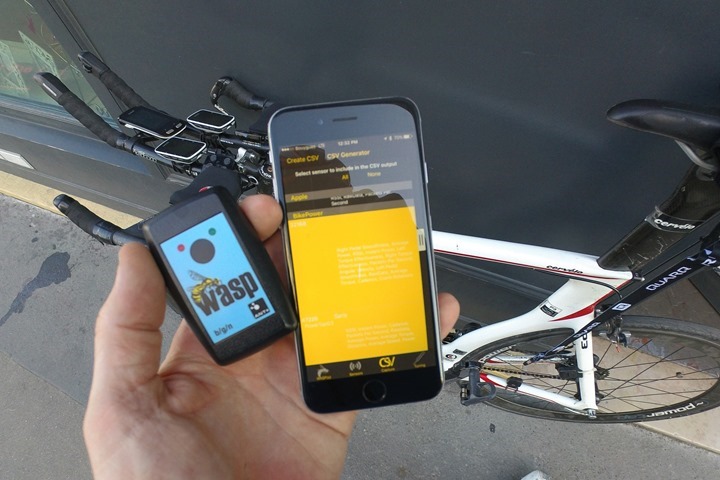 Now as I noted on Twitter, for whatever reason I’ve had two Edge units this weekend that refuse to charge.  First is an Edge 820, which not only refuses to charge – but has now run out of juice.  And then second is an Edge 520, specifically one of the ones I used on my tests. So I had to get that all connected via Bluetooth Smart to my phone to get the data off before it dies for good.  Usually for my power meter testing units I don’t connect them all to my phone, since Garmin has a limitation of how many paired devices you can have saved.

In any event, here’s the data from the indoor ride:

And here’s the data from the outdoor ride:

The brief overview is that overall on the indoor ride things went reasonably well, though I saw a brief ~10w shift occur at one point that I need more clarity on.  This may be tied to me moving a fan around in the room briefly or after a short break to try and sort out the Baby, so I’ll be doing some testing there.

On the outdoor ride, again on the whole things went well.  I thought it was interesting that the PowerTap G3 though was showing as above the other power meters, and usually it’s below.  This doesn’t match what I saw a few days ago in some other tests.  All units were offset upon heading outside, and then again about 10 minutes later.

One area where the WatTeam unit struggled is on two sections of particularly rough cobblestones.  On regular cobblestones, the unit did great.  But on two short sections that are particularly nasty/rough (pretty much the worst in Paris), it dropped power out.  The WatTeam folks are looking into it, and see what options there are.  Those two sections are easily seen above where the green line drops down from the rest of the graph.

Otherwise though, it handled pretty well – which matches in what I’ve seen on three other rides I did with it last week.

Perhaps we’re becoming more French.  Or, perhaps the blah weather outside just kept us inside.  Either way, we simply spent all of Sunday relaxing around the house.  The Girl made banana pancakes for breakfast, I made paninis for lunch, and then we seared up some steaks and green beans for dinner.  All of which makes for the most logical home-cooked meal progression we’ve had anytime this year.

In between all that though we put together a puzzle: 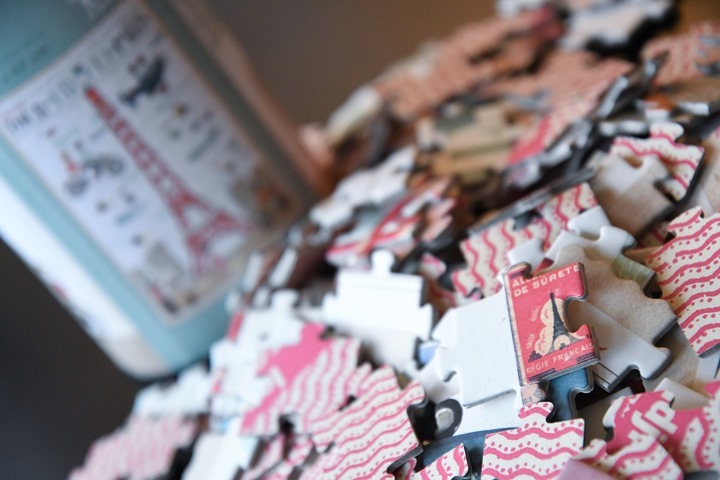 And watched Home Alone (why not?): 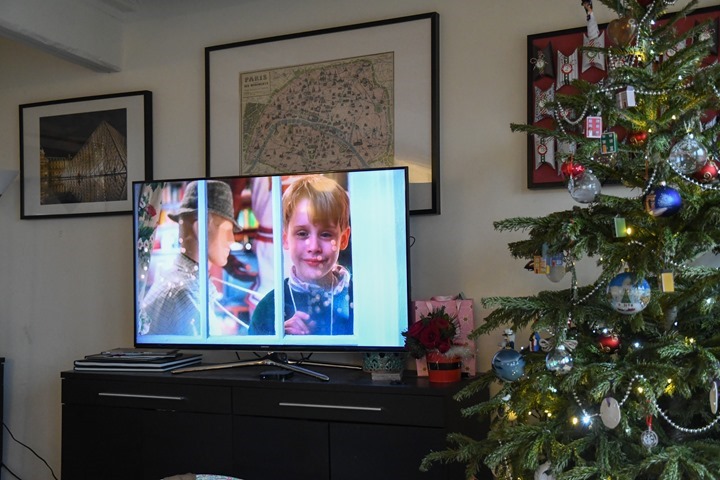 And generally just lazed about the house doing nothing.  Which, is why I don’t have any other pictures.