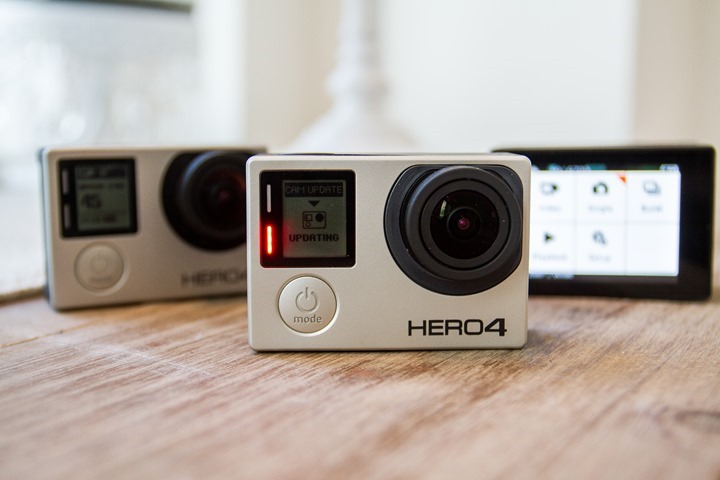 Yesterday GoPro pushed out updates for their Hero4 lineup of cameras (the Hero4 Black and Hero4 Silver).  These firmware updates, while announced back in January at CES, edge GoPro further ahead of competitors in certain categories, while bringing them up to pace in others.

I just wanted to briefly run through some of them, and show you a few samples of test footage.  Of course, you’ll first need to update the unit.  It only takes about 2 minutes to do, and is pretty quick and simple.  Note that these updates are only for the Hero4 Black and Hero4 Silver cameras.  They do not apply to the base 2014 Hero edition, nor any of the older cameras.

Thankfully the firmware update doesn’t wipe any other settings you have, such as the WiFi and app connectivity – so it’s quick to get up and running again. 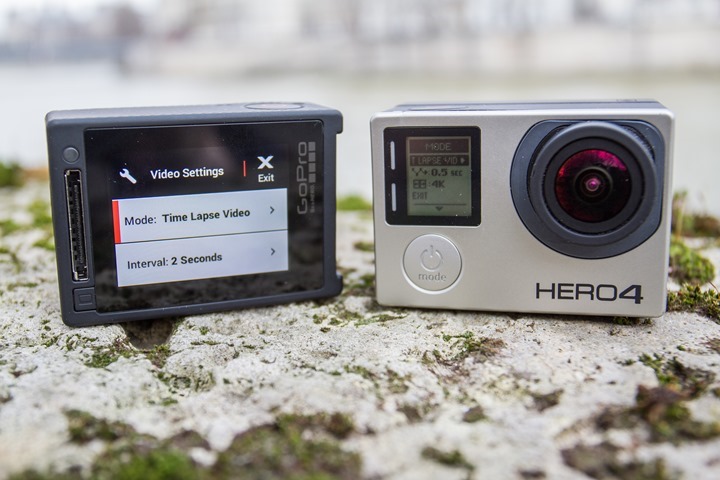 While GoPro has always technically had a ‘time lapse’ function within the camera, that function was a solid pain in the butt to use.  When enabled it created a massive pile of photos, old school style.  That meant if you configured it to take a photo every second, after a minute you’d have 60 photos.  And after a 5 hour time lapse you’d have a cool 18,000 photos.  From there you had to transfer them to your computer and pipe them through the GoPro Studio app (or other 3rd party app).

Now this system did have one benefit: It allowed a bit more flexibility in using that mass of photos to edit them prior to video.  For example, with the photos at a much higher resolution than video, some would crop the photos and create what appeared to be panning or other movement in the time lapse.  Good stuff, but not easy for the average person to do.

So instead, they followed what Garmin introduced on their VIRB action cameras in 2013 – the ability to have completed videos produced by the camera.  So when you hit finish on the time lapse on the camera, you immediately have a video file.  With the GoPro, that video file can be transferred to your phone via app as well.

When you look at the configuration options, they’re identical across both the Black and Silver units.  You’ll select ‘Time Lapse’ as an option under the Video settings.  Then within that you can select the interval for how often to take a photo to add to the video: 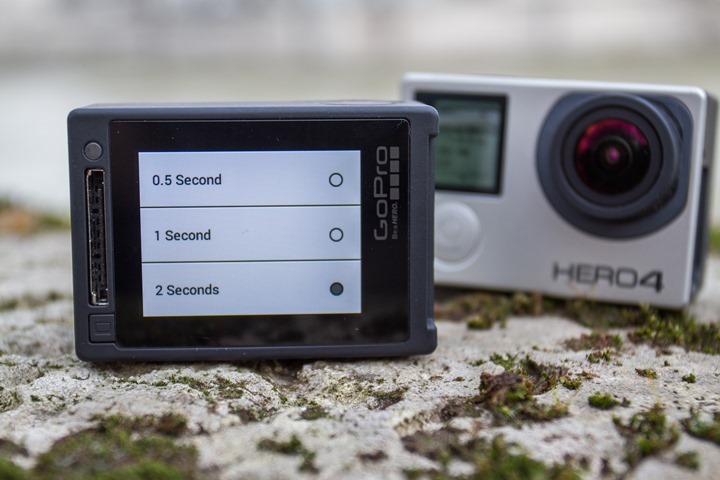 Finally, you can choose between 4K (16:9 format) and 2.7K (in 4:3 format) video to export.  There are interestingly no lower resolution options. 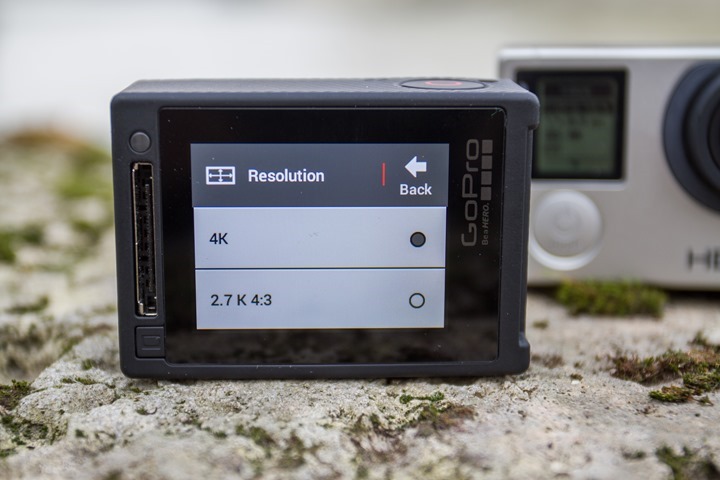 With that, you go ahead and start the camera.  For fun, I mounted two units last night outside – one on the roof and one on a window and let them run for about 6-7 hours.  I triggered one manually, and one via WiFi.  One was set at a lower frame rate, one at a slightly higher frame rate. 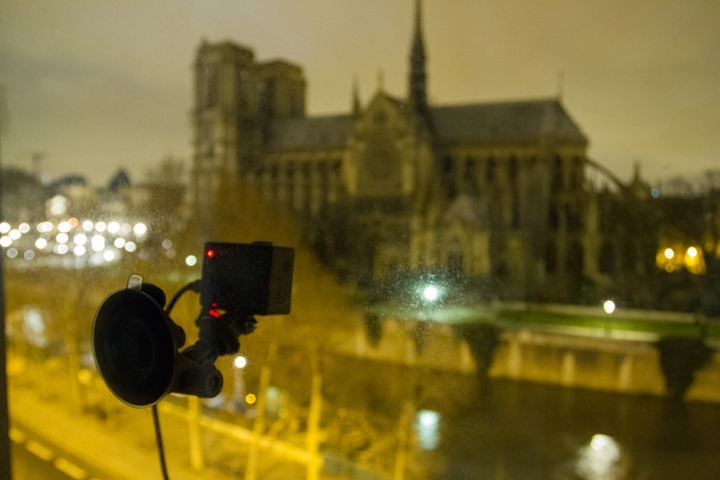 Oh, in case you’re wondering, I had them plugged into the wall via USB so they’d stay powered on.

Then, I went to sleep.  When I woke up, here were the results.  First up, the roof cam:

And then, the window cam.  The view isn’t terribly different.  The window cam has the water view, the roof cam has…well…the pigeon, and my disabled smokestack.

One of these days I’ll figure out how to do something more creative on my roof, but it’s a bit tricky since I basically have to use this tiny little window above the tub/shower, and sink.  Which typically involves not falling down into the tub in the process.

In any case – there ya go – time lapse functionality.  Definitely cool stuff, and so much easier than in the past. 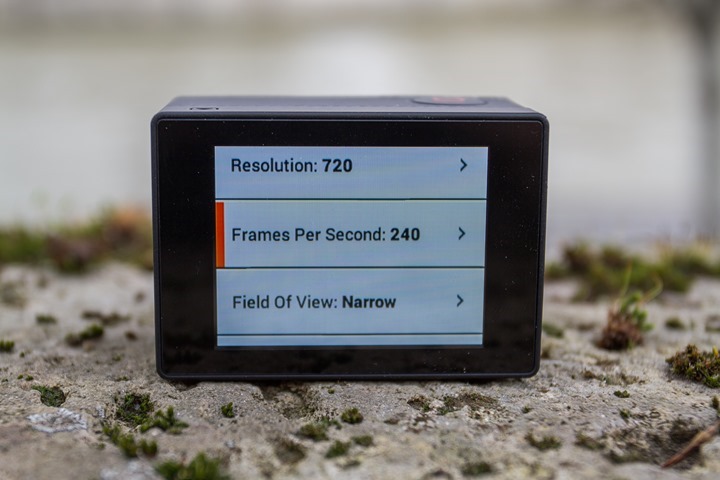 On top of the time lapse, GoPro also added a bunch of other updates to the unit.  First up is the ability on the Hero4 Black to go to 240 frames per second (fps) in 720p mode.  That’s basically the entry HD quality tier – but more than sufficient for most people’s uses.  You’ll find this option within the video menu, like the other video modes: 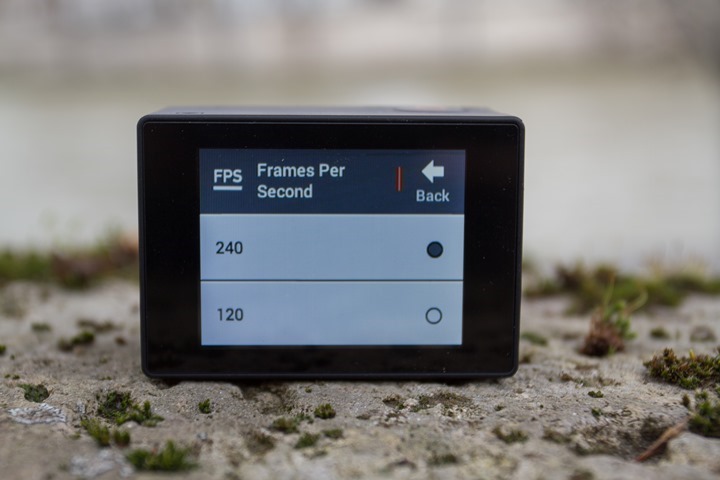 On this particular Thursday I lacked any exciting way of demonstrating this.  I was just recently watching a Mythbusters where they chopped fruit in the air using a sword.  That sounded like a great demonstration…until I realized I lacked a sword.  So, no fruit for you.

Next, they also added in a higher photo burst mode – this is on both the Hero4 Black and Silver units, now going to 30 photos in 6 seconds (30/6): 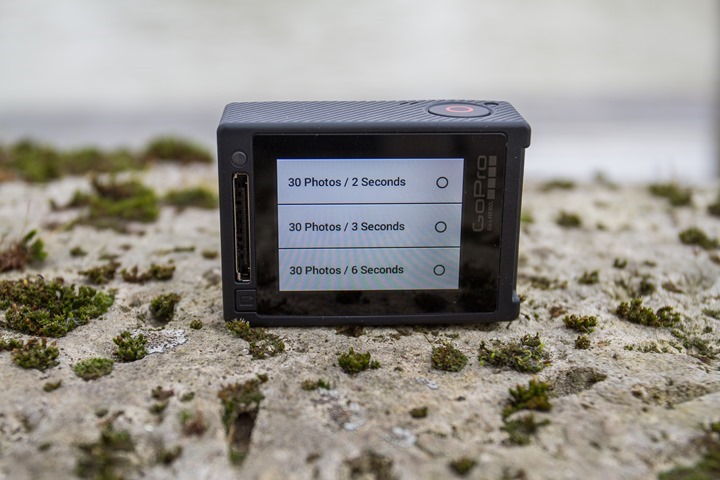 Then, last up both the Hero4 Silver and Black received auto image rotation.  This follows in line with what the Shimano action cam introduced this past summer, where it’ll automatically rotate the image depending on the orientation.  This is super-useful if you often mount the camera upside on a bike mount and also often forget to flip the camera.  Been there…done that. 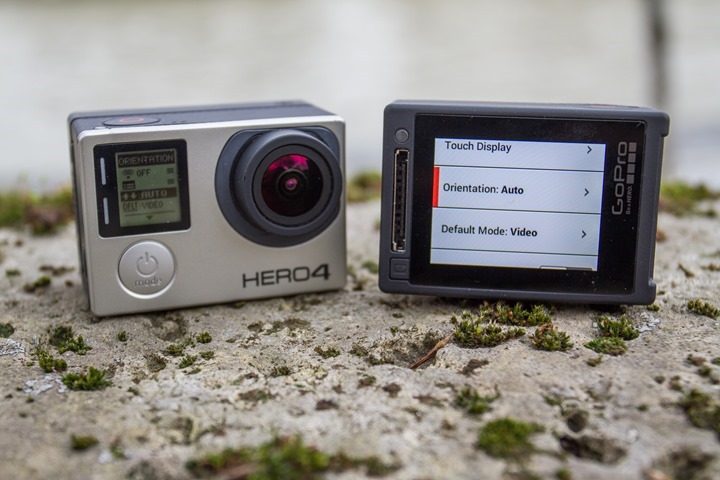 GoPro has simply extended the previous orientation menu to include ‘Auto’.

Finally, there were a couple of other smaller (but important for some) changes that were made.  Here’s the full listing for both cameras:

I suspect for most users, the biggest gain will be the time-lapse mode, followed by the 720p240 video mode, primarily in action sports such as ski/snowboard jumps.  If you’re filming your dog walking around a park…probably not so much of a use there. 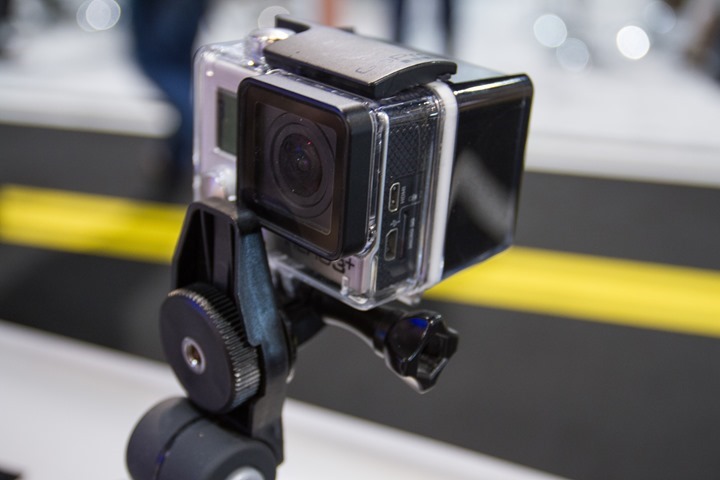 I’ve got a bunch of semi-random things I took photos of or got information on at CES last month, but haven’t quite figured out what to do with.  Given the time lapse aspect of this post, I figured this might be a good place to briefly mention one product I stumbled into made by DigiPower.  Or rather, a suite of products.

This is the re-fuel, which is a backpack style attachment for the GoPro Hero3 & Hero4 lineups that adds up to 24 hours of battery life.  There are three units, the 6hr, 12hr, and 24hr versions.  Each attach directly to the unit and include a case extension to keep the whole thing waterproof. 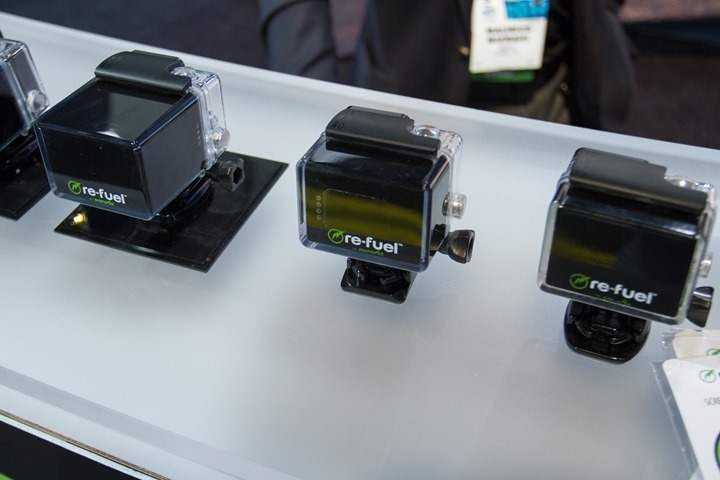 Now obviously if you’re doing a time lapse like I did and can just plug into the wall – then that’s perfectly functional.  But if you’re trying to capture a longer distance event, or just a time lapse out in the wilderness without a power outlet, then this is a solid option.

To re-charge the units, it’s about 8-10 hours for the 24hr pack, and about 6 hours for the 12 hour pack.  So pretty reasonable times that can be done overnight.  Here’s a quick gallery of the units:

The only catch?  I can’t actually seem to find the darn things for sale anywhere yet.  Still, pretty darn cool.