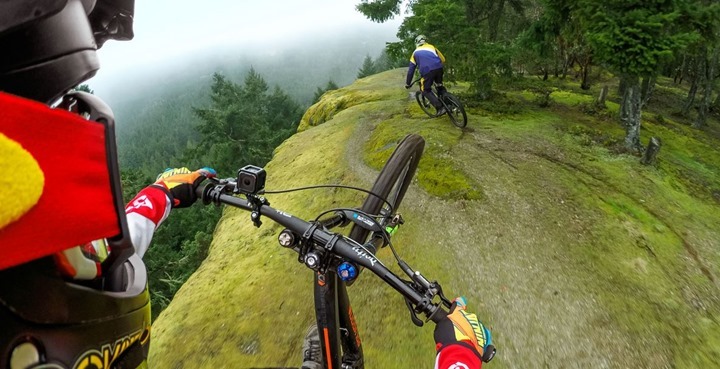 Please note: My Full In-Depth Review is now published and available.  Please click on over to that post to get my final impressions of the unit. Enjoy!

Today GoPro has introduced its tiniest camera to date, the Hero4 Session.  This small cube-like camera shoots up to 1440p footage (that’s a little above your standard 1080p HD), as well as works with the existing GoPro mount lineup.  Most notably, the entire pod is fully waterproofed down to 33ft (10m) – ideal for just about anything water-related except diving.

Of course, information about the camera is still pretty fresh.  I’ve been talking with GoPro the last few days, but my Hero4 Session for review is a bit tangled up in customs right now – it happens every once in a while…usually at the most inopportune times.

Still, here’s the low-down for now.  I’ll update this post with more detailed hands-on imagery as I get actual hands-on time.  So consider this a bit of a living post.

Weight-wise, the units differ quite a bit too – with the Hero4 Session sitting at 74g being internally waterproofed, versus the Hero4 Silver/Black at 147g with a waterproof case (or 84g totally non-waterproof).

Many might look back at the Polaroid Cube action camera as being similar in size.  However as a buyer of that camera, it was a mess when it came to specs and most importantly – quality.  Your disposable camera with the wind-up shutter made better pictures than that thing did.

Getting back to the Session though, looking at the technical capabilities the main differences here between this and the Hero4 Silver is that the Silver has the higher end 2.7K and 4K footage capabilities (and higher frame rates).  While the Hero4 Session tops out at 1440p, which is a notch above 1080p.  Thankfully though, the Hero4 Session does manage to squeak out up to 100FPS (frames per second) on 720p.  This is notable because with the smaller form factor it’d be ideal for higher frame rate shots where only the smallest of cameras could fit easily.

Here’s a quick breakdown of just the top-end resolutions (of at least 24FPS) and 720p top frame rates for each of the units on the ever expanding GoPro lineup:

Phew! So many current-generation options.  Of course, a mere resolution spec really isn’t all that matters.  For example, I personally use a small fleet of GoPro Hero4 Silver’s over the Hero4 Black.  Why? Because I like the very color-crisp screen on the back of the Hero4 Silver (not on the Hero4 Black), but still value the extra features the Hero4 Silver has that the Hero+ LCD lacks.

Of course, with the smaller form factor of the Hero4 session you lose that larger screen.  And in fact, you lose all configuration on the unit, though you do retain a tiny little screen showing you status.  That means in order to tweak and configure settings you must have a compatible smartphone (iOS/Android/Windows Phone).  It’ll do that connectivity over WiFi with Bluetooth Smart.  The downside though is that you can’t just switch settings on the fly easily.

Instead, you’ll do either a short or long press on one of the two buttons depending on if you want video or stills.  But those stills will only be in the time-lapse mode, but that’s fine honestly. Since that’s often what I use when I want to capture photos anyway while on the go, as it ensures I get the right shot versus missing it slightly.  So if I get a few extra throw-away shots, that’s OK.  The other button meanwhile acts only as a power button.

It’s just a bit odd given they have two buttons and a tiny screen they just wouldn’t copy the same button pressing options they’ve had for the last half a decade or so. 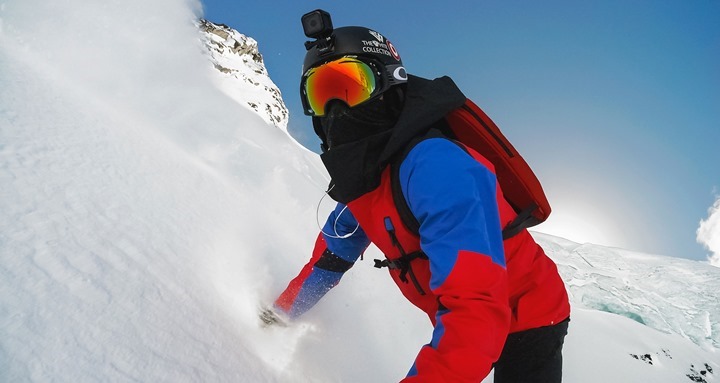 In any event, in line with the Hero4 Silver is the unit’s ability to enable Protune functionality, which is skipped on the lower end Hero+ LCD model (despite being the same price as the Hero4 Session).  More advanced users will use Protune to get a bit more out of the video color range, used in post production.  They’ve also kept the Auto Image Rotation functionality on the Hero4 Session, which was introduced earlier this year on the higher end GoPro units.  The feature ensures that the image is rotated correctly upwards even if you mount the camera upside-down.  It can also be turned off though, in the event you’re inverting yourself (a strong violation of my personal policy to never have my ass above my head, a rule I’ve adopted from one of our friends). 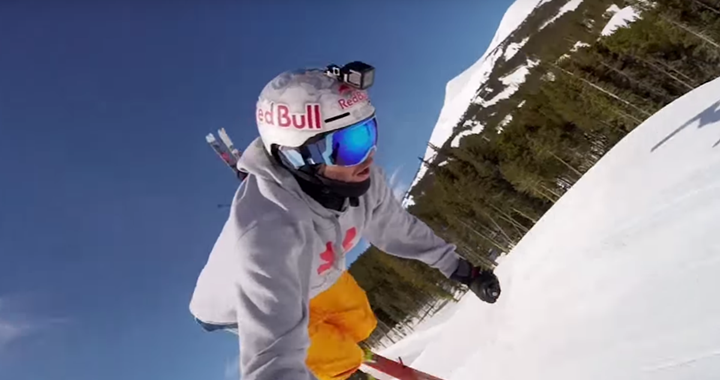 On the mounting front, the unit is fully compatible with all existing GoPro mounts, both GoPro branded ones as well as all the 3rd party ones.  They’ve also introduced a new ball joint mount system with the frames, seen below on the left side of the image.  The ‘frames’ are designed such that you can turn the camera any which way in the mount to find the right angle, which is different from past GoPro cameras which only mount to the bottom.

They’ve also added in some floaty mounts too – for when you’re closer to the water.  Like previous floaty mounts, these ensure that if the unit detaches from you – it’ll just float to the surface. 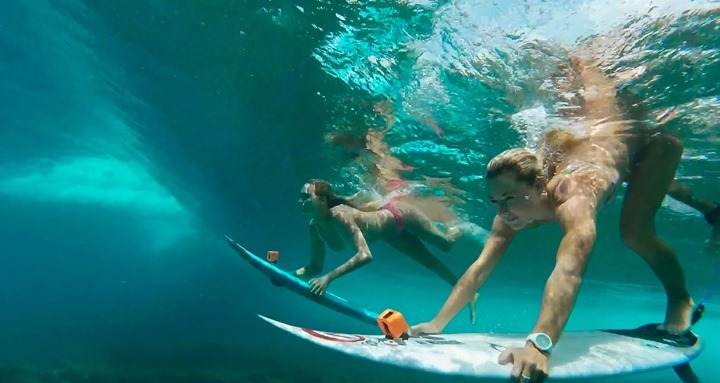 Finally – as we get into the battery side of things, the internal 1030mAh battery does fairly well at a claimed 2-hours.  That’s inline with most action cams these days.  Some are a bit higher and some are a bit lower, but most tend to find the sweet spot in that approximately 2-hour range.

However, the biggest challenge with the Hero4 Session battery is that it’s not removable.  This means you can’t swap batteries.  Rather, it’s built-in – just like a GPS watch or the Hero base unit.  You’ll charge it via a micro-USB cable – which is an interesting change for GoPro, as all previous cameras have used a mini-USB port instead.

I’ve added the GoPro Hero4 Session into the product comparison tool.  It’s here that you can mix and match the different action cameras against each other, creating various comparisons.  For the purposes of the below chart, I’ve just gone with the current generation GoPro models.  But you can easily make your own charts with other products using the tool.

Remember again, you can whip up your own comparison chart using the product comparison tool. 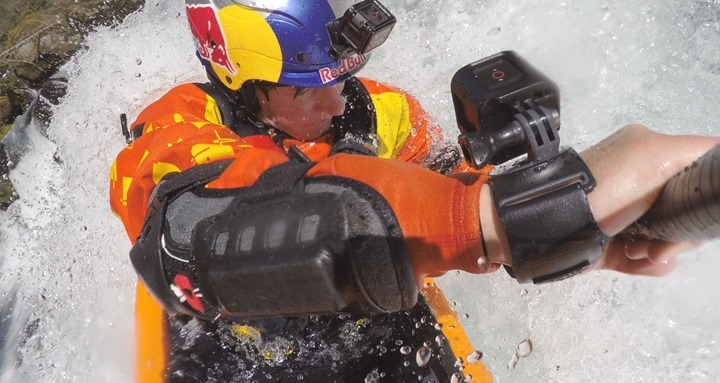 Overall this is a very impressive unit – at least on size and specs given the size.  For example, the 2 hour battery life as well as the 1440p resolution wouldn’t have been something I’d have expected in that small of form factor.  Additionally, keeping with the GoPro mounting system means it’s an easy transition to make for owners of other GoPro cameras.

Price-wise it’s so-so, maybe perhaps a bit high at $399US/429EUR.  I would have expected them to go a bit lower – such as $299 or perhaps $349US, especially given the non-replaceable battery.  On the flip side, with a smaller form factor they can increase the price and get away with it.  Hopefully we’ll see them tweak the button configuration to allow for the same mode controls as the Hero units have had for ages (with only two buttons).

The real question will be image quality.  Obviously GoPro is one of the leaders when it comes to video/image quality in the Hero lineup – and has been for some time.  But with this new smaller form factor it’s likely that compromises would have been made.  That seems to be the case as the early media loaner unit feedback that has trickled out from a few different outlets have made comments about video quality.  But as it often the case – I’ll have to see it for myself to make that determination.  Perceived video quality (beyond the specs) can surprisingly often be a somewhat subjective thing, especially in varying light conditions.

With that – I look forward to playing with the unit more in the coming weeks!

Update – support the site! Found what you read above useful?  If so – then you can support the site here by ordering the GoPro Hero4 Session via Clever Training.  They’re accepting orders for the unit, which GoPro says should start shipping Monday, July 12th.  In addition, by being a DCR reader you can save 10% on your cart with coupon code DCR10BTF (and free US shipping)!

Note that I’ve been using the Hero4 Session the last week, and will start posting my thoughts on it here over the following days, with a In-Depth review likely in late July.  In short, I love the smallness of it, and the quality is ‘good enough’ for most of my purposes.  My only disappointment is really the buttons, which are fairly convoluted and non-consistent in use.  But, when using it with the smart remote or phone it’s spot-on sweet.