While I was technically home this weekend for about 40 hours, it somehow seemed like only about 8 hours.  Nonetheless, here’s how I spent those 40 hours.

1) Made my way back from Eurobike

First order of the business for the weekend was getting back from Eurobike.  While it may be a massive convention that sprawls across former aircraft hangers, it is unfortunately in one of the least accessible places in Europe.  There’s no fast way out of the town (except a couple of very expensive flights per day).  Instead, you use a combination of trains, boats and busses to leave the city behind.

In general, the fastest route back to Zurich is a 45 minute boat ride across the lake, followed by a 1hr train to Zurich.  From there, I boarded a 4-hour TGV (high speed train) back to Paris.  I left the grounds at about 1:30PM, and didn’t arrive into Paris until 9:30PM.  Unfortunately, the flight from Zurich to Paris didn’t fit my departure schedule at Eurobike. 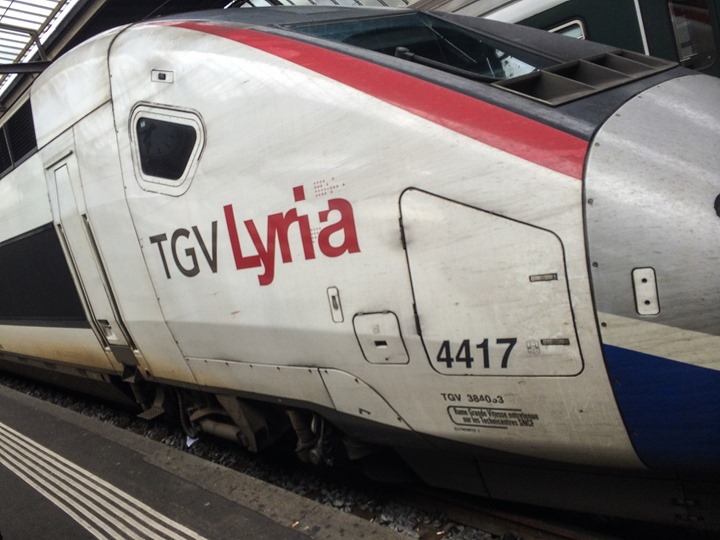 The only thing left was a quick 8-10 minute bike ride home on the Velib, my little suitcase and all: 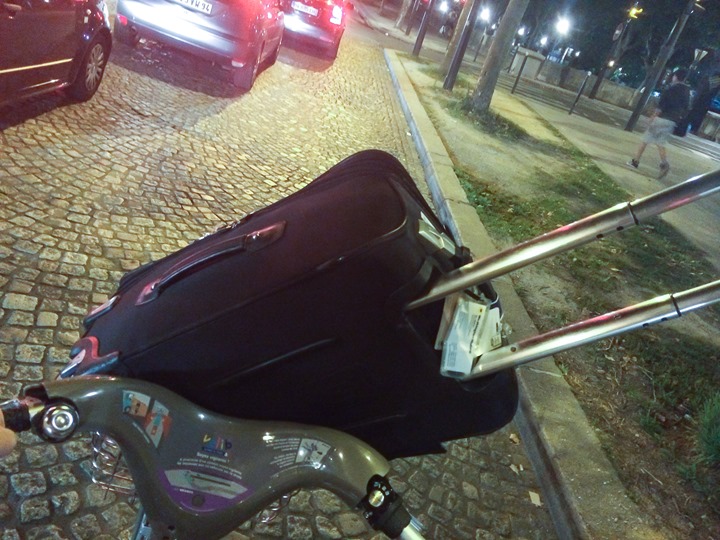 Finally, back home from a whirlwind 6-day trip that saw me spend time in Paris, Frankfurt, Jeddah, Bahrain, Al Khobar, Frankfurt (again), Friedrichshafen, Zurich, and then finally back to Paris.

2) Unboxed a lot of stuff, or, started to anyway

Upon getting back home I found all assortment of boxes.  Power meters, trainers, watches and other randomness. 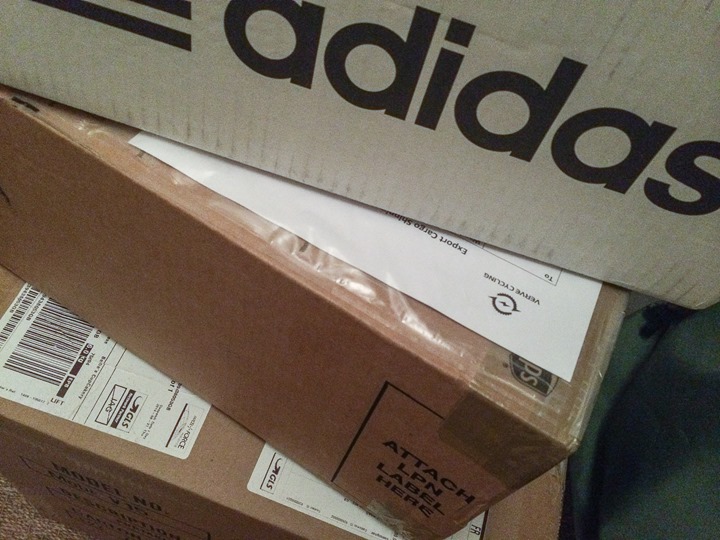 For example, the top box has the new Adidas Fit Smart in it, then the Verve Infocrank below it, and then a bike pressure washer below that.  I bought that because it allows you to charge the battery and fill up a reservoir and then go outside and wash down your bike.  Perfect for the rainy fall/winter/spring of Paris and reducing the time I have to spend with the bike in the shower.

I’d spend a fair bit of time unboxing some of it, but others would just have to wait until I return from my next trip, later in September.

I had two runs, one on Saturday and one on Sunday.  For Saturday it was just an easy 40 minute run, mostly to shake out the cobwebs from a couple of no-run days at Eurobike (I barely had time to eat, let alone run).  It was a mostly nice day out, so I just connected through various parks, from one area to another: 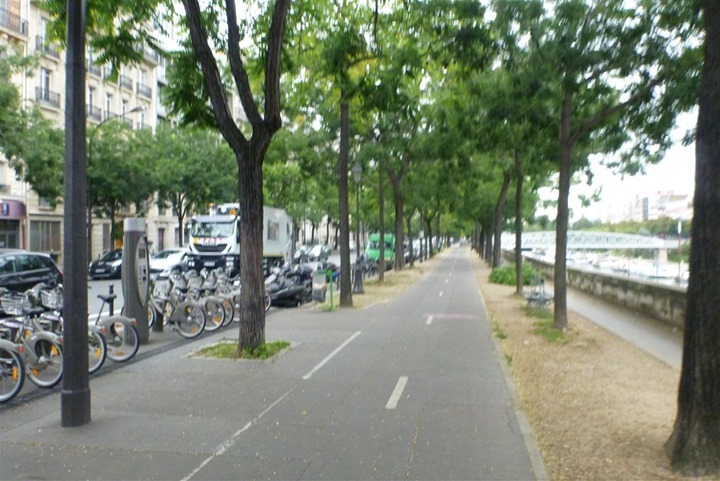 It wasn’t until the run auto-synced to Strava that folks pointed out that my route looked a bit…well, I’ll let you decide. 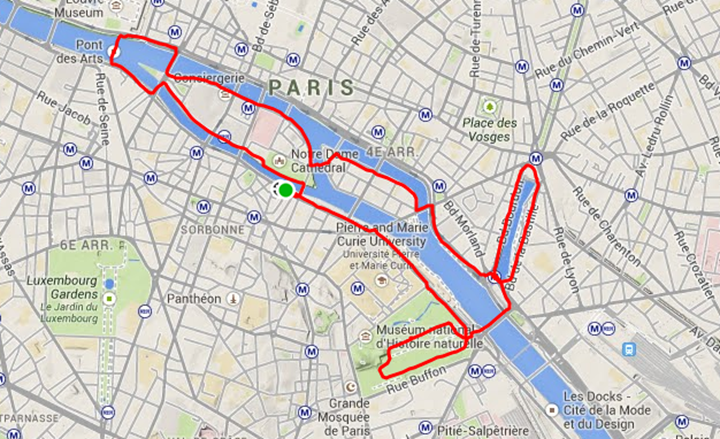 One reader said it was clearly a floor pump.  Of course!

Sunday I was back at it again, this time with a tempo run of sorts.  Given the roadway along the river was closed (and free of the beaches), It would be perfect for doing the tempo portions.

While there were many people out riding, running and rollerblading (very popular here), it wasn’t overwhelming and I could easily cruise along. 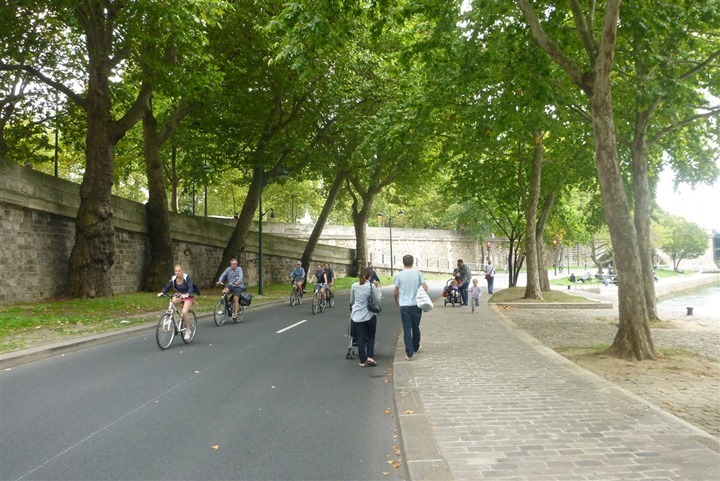 Plus, the 1/3rd of a mile long tunnels provided a good test ground for a few devices: 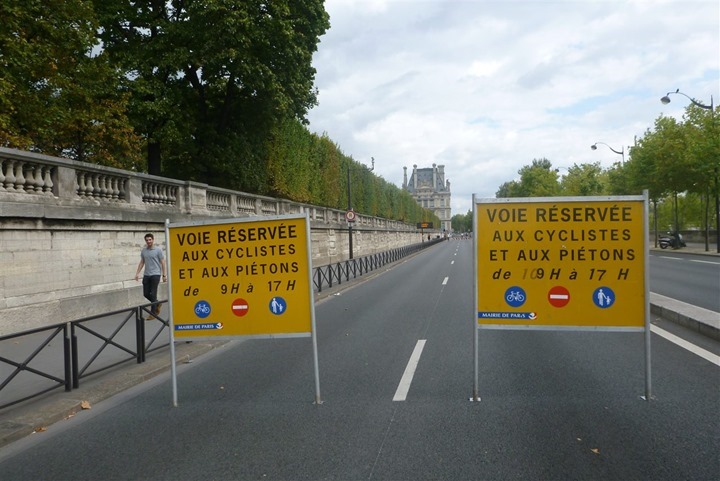 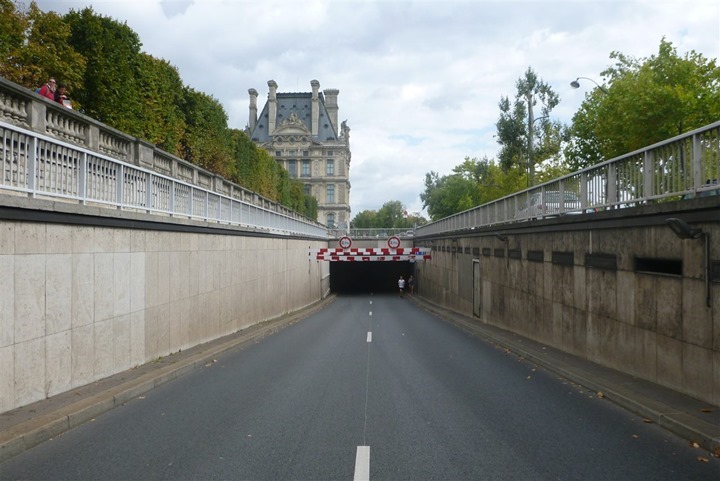 Finished up going into some short sprints across a bridge with this view.  A nice start to what is nearly fall: 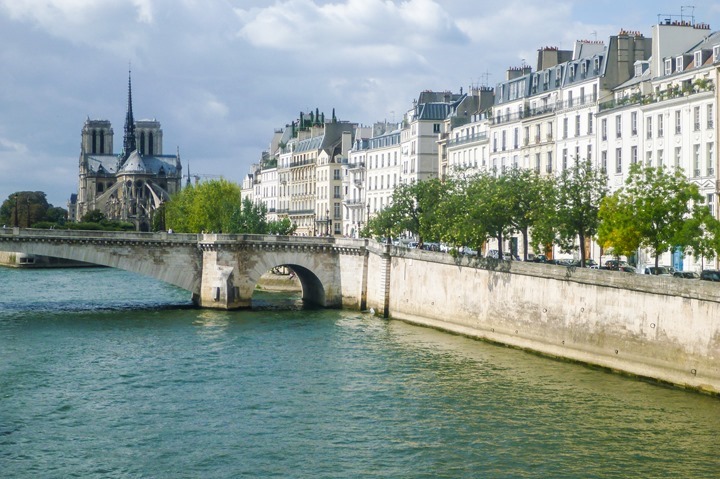 Overall a great weekend for two runs.  Nothing super-long, just squeezing what we can into my schedule in what is by far the busiest time of the year for me.

4) Attempted an install of the Verve Infocrank

For reasons unclear to me I thought it’d be interesting to install the Infocrank and poke at it a bit on Sunday.  I don’t know where I thought I’d find the time to even use it on Sunday, but on Saturday evening when I had the brilliant idea, it seemed quite logical.  So I got it all unboxed.  I’ll give them solid props for a box job that would make any Tetris fanatic proud: 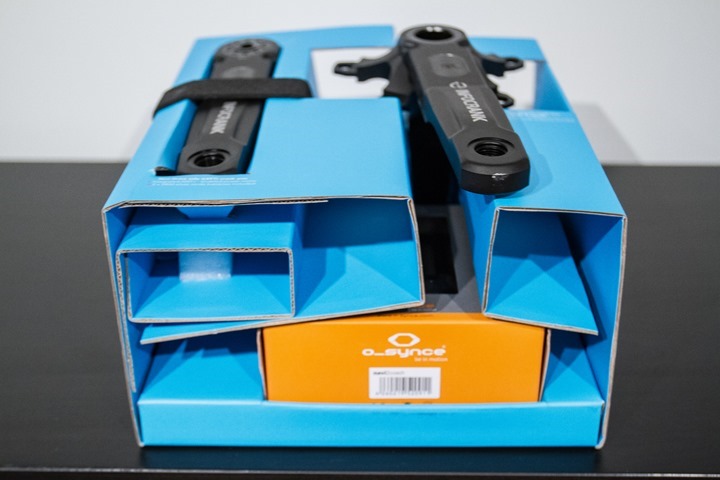 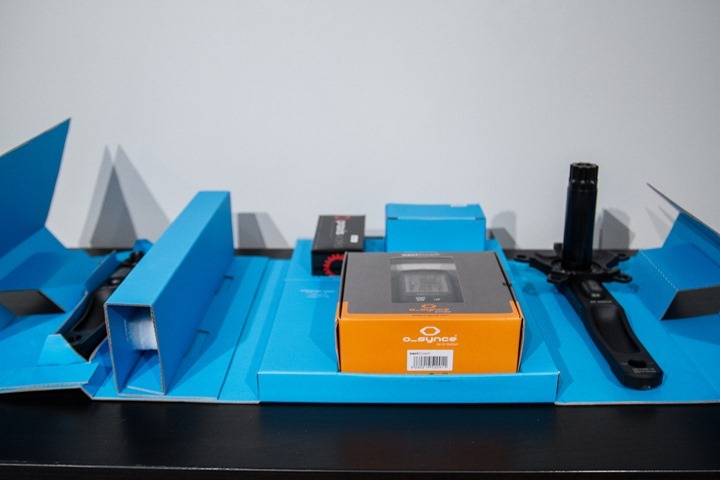 For the most part things went fairly quickly.  The manual was silly easy to follow – and I’ve gotten really good at installing power meters.  It’s really about the only bike-mechanic related thing I can do well.  Should my derailleur come out of alignment, I’m totally screwed.  But, crank installation – I’ve got that baby down. 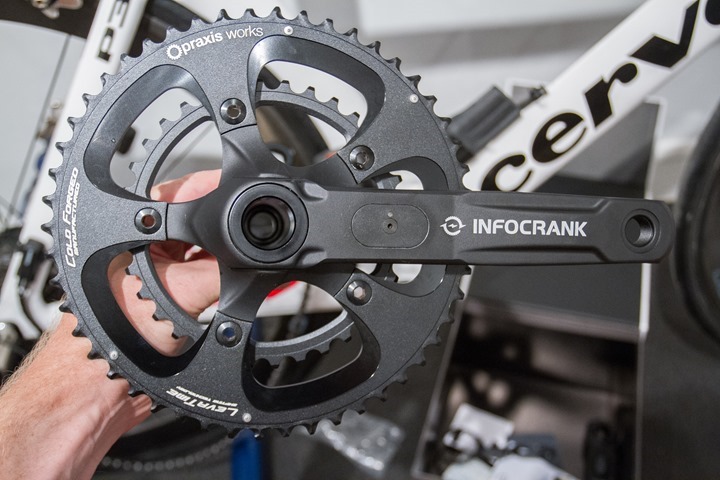 Unfortunately, I hit a few snags along the way.  At the point of magnet installation is where things went down.  The unit has a few different magnet options.  Ideally I would have used the magnetic rings, but unfortunately they rubbed against the crank arm due to the Cervelo’s slight pop-out in that area. 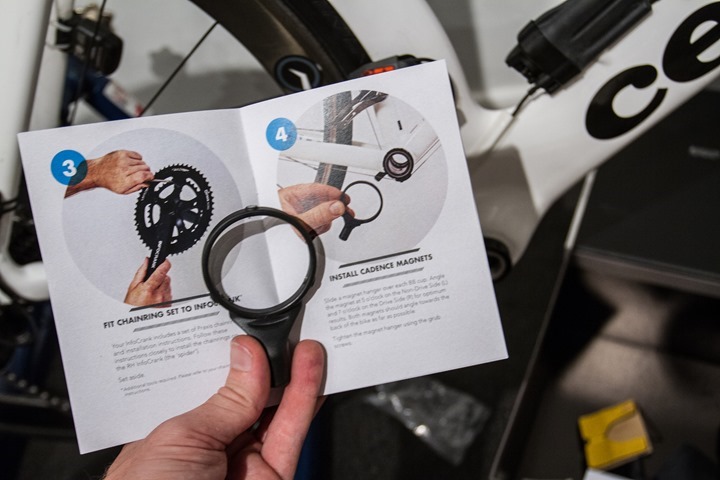 So instead, I moved onto the only other option I had – the sticker magnets.  This requires a bit of alignment, scissors, more alignment, and then hoping you’ve got it right. 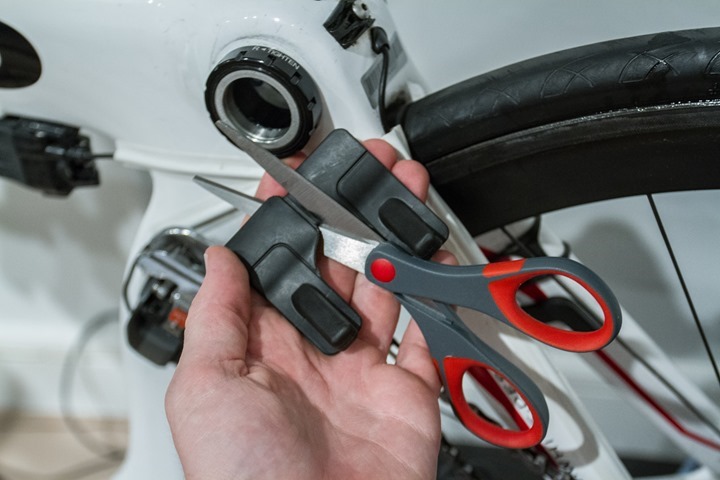 It’s a bit sticky and finding a smooth spot that triggers the magnets has been almost impossible.  So, I’ve circled back to the folks for another option (I believe there’s one more magnet type they have).  I’m sure they’ll sort one out.

5) Caught a few flights up to Oulu, Finland

Sunday was a whirlwind of running, packing, and helping out for a few things related to the CupCakery.  Starting this evening I’m on the road for two weeks, covering five countries – which have rather different climates, and different purposes.  The end-state is arriving in Interbike a touch over a week from now.

The trick is dragging a ton of gear I need to knock out short-term testing/validations of products ahead of Wednesday.  Said gear is not lightweight, nor terribly small.  Bike stuff and related electronics never are, at least in bulk.  Thus the following 7 or so flights between now and my arrival in Las Vegas will undoubtedly be a cluster at every turn.

First up though is spending Monday with a group of Finnish folks in Oulu, Finland.  I’m not entirely sure what else is in Oulu aside from the people I’m going to visit.  But I’ll be sure to let you know! 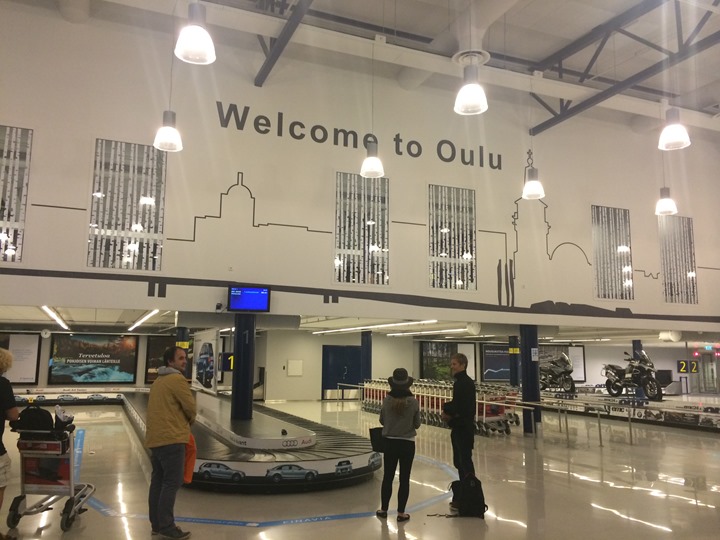 Plus, I think it might take the cake for the furthest North I’ve ever been (on land anyway).  More on that though, later this week.  Should be interesting!