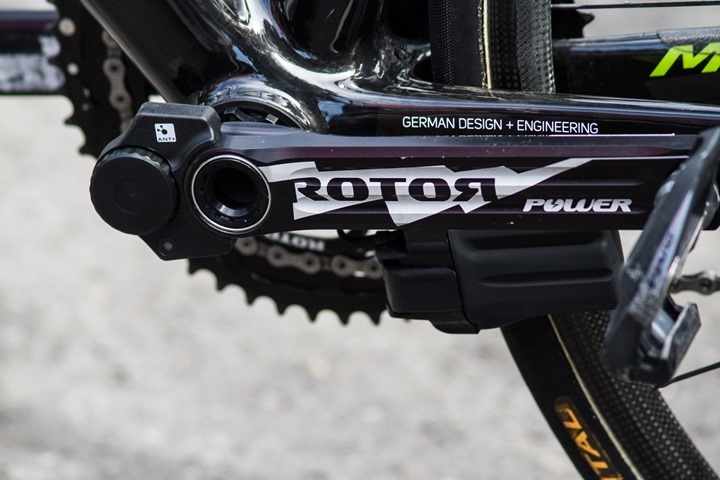 ROTOR has officially announced their newest power meter offering, the ROTOR Power LT.  The LT stands for ‘lite’, but it could also actually stand for ‘Left’, which is because unlike their higher end power meter the LT is a left-leg only system.  This makes it identical in functionality to that of the Stages Power Meter that was announced just under 2 years ago.

I’ll dive through the basics, the pro team usage in the Tour de France, why it’s important to understand left-only power, the models available, and my thoughts on the offering. 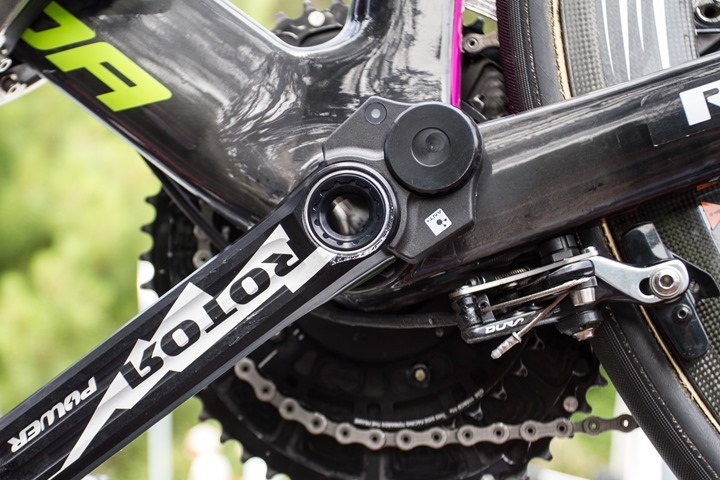 The ROTOR Power LT is at its simplest merely half of the full ROTOR Power system.  The full (non-LT) system has two crank arms (one for each side) that both have strain gauges to measure power output.  Each of those arms then transmits power data using ANT+, which is then combined on a single crank arm and then transmitted to a head unit such as a Garmin Edge or other ANT+ capable device.  Where the full system differs from that of this new LT system is that they’ve removed the right side (drive side) of the equation, effectively becoming a single-sided power meter just like Stages.

By going to a single-sided system they’re able to reduce the platform price by cutting in half the required hardware.  Though, in actuality the drive side tends to cost more, so they’ve likely reduced their raw costs by more than half.  Of course, as you’ll see the end-price didn’t quite get the cut that folks would have expected. 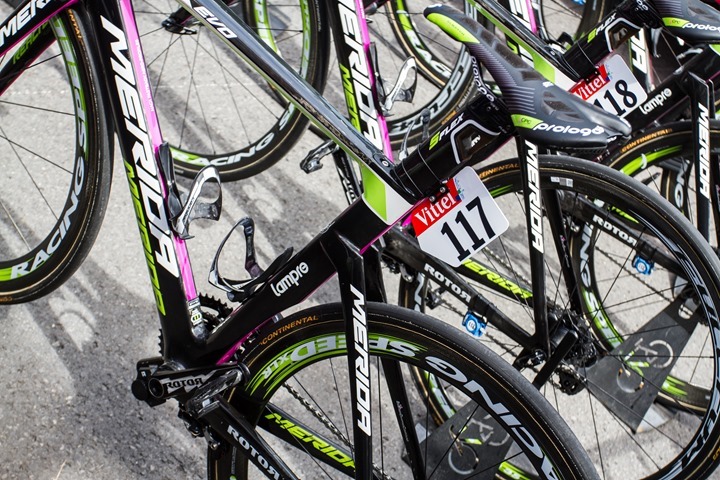 The Power LT is already being tested and used by a pro team today, where it’s installed on the bikes of Team Lampre Merida.

There however the units are actually used in conjunction with a Power2Max power meter on the spider, which you can see below on the flip side of the same bike: 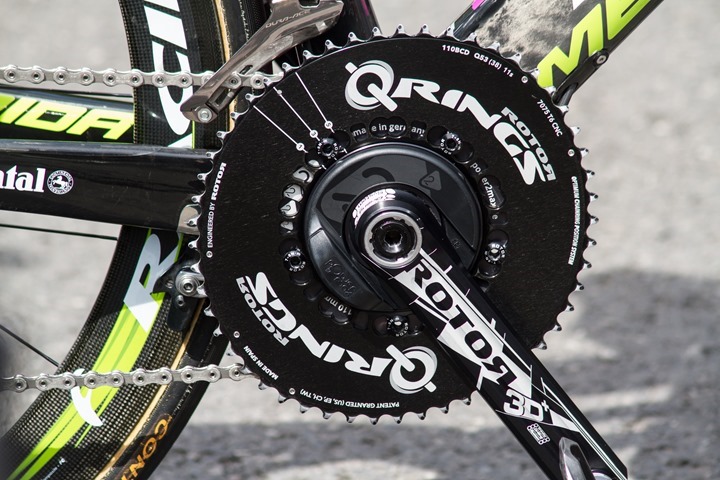 This has allowed them to reference against a ‘known good’ when need be.  In talking with one of the Team Lampre Merida mechanics on Tuesday during setup he noted that the vast majority of the time they were using the ROTOR LT as their primary power meter.

In their case, they were pairing the ROTOR LT to Garmin Edge 510’s.  The Edge 510 (like all Garmin devices) can only record and display a single power meter at one time.  So they are unable to concurrently record both streams to compare later but have to simply decide ahead of a given ride.  However, the rider could have both power meters configured as different ‘bike profiles’ on the Edge 510 and simply change bike profiles as needed if they were seeing issues. 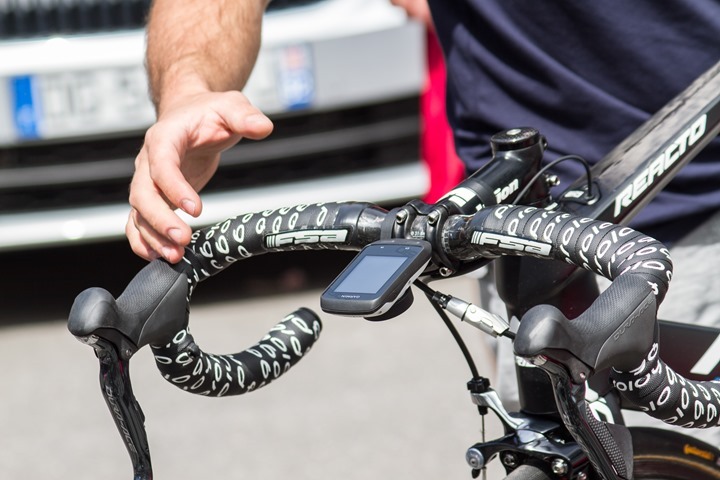 Still, seeing a new power meter product being used in the Tour de France is certainly promising – even if it’s just half of an existing product.  And ironically, it’s also a pretty interesting show of confidence by ROTOR to use Power2Max (a competitor) as a known good, as the president of ROTOR told Bike Radar’s Ben Delaney that it (Power2Max) was “100 percent accurate”. 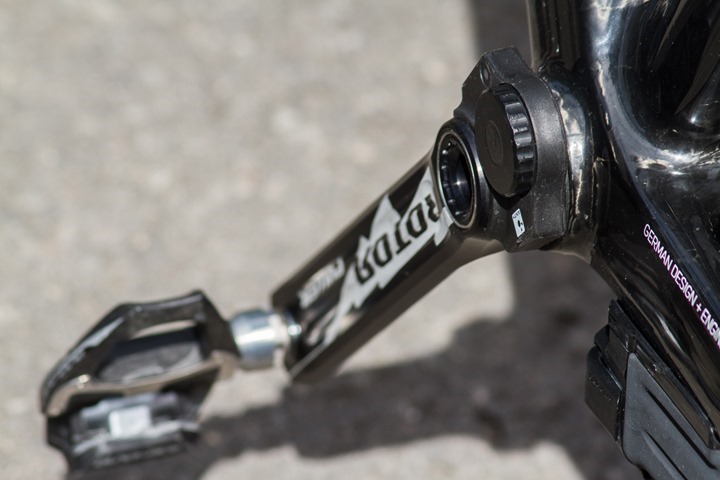 So why do I keep mentioning left-leg only?  And why’s it important?

Power meters measure torque (basically your output) via strain gauges.  These gauges are placed in various locations depending on the model of the power meter.  For example, a PowerTap has this in the rear wheel hub, whereas Garmin Vector has it in the pedals.  Power meters like Quarq, SRM and Power2Max place these inside the spider under your chainrings.

The full version of ROTOR Power places two of them, one on each crank arm.  Whereas the ROTOR LT, like Stages Power, only has a single set of strain gauges on the left crank arm (riders left).  This means that it’s only able to capture the power from the left leg.  In the case of Stages, they simply double the power value to give you total power.  You’ll often see Stages note that they are within 1.5% accuracy “as measured”, which means that they don’t claim that it’s 100% accurate to your actual power, but rather just the measurement point.

In my testing of the Stages system I found that in the vast majority of cases, this works out just fine.  It’s not 100% perfect though.  For example, most people have biases to either a slightly stronger left or right leg (which is totally normal).  If you have a 5% bias to a single leg 100% of the time, then one could argue things would always be consistent.  The challenge here though is that some people (including myself) tend to have shifts in bias depending on power output level and factors like fatigue.

For example, my balance is pretty good and consistent up until my FTP point (about 315 watts).  Beyond that though my balance shifts quite significantly.  On the flip side, for myself as a triathlete I rarely have a ‘sprint’ effort.  So it’s of less concern to me personally in most of my normal training.  Whereas a road cyclist doing lots of hard sprints may see a bigger impact (if they follow a similar trend as me).  This could either inflate or deflate values, again, remembering it varies on the person and many other factors.

(Above, an example of power balance on my Sunday ride, you’ll notice the gradual shift from start till end)

You can’t easily test to understand your bias because it does indeed generally shift based on a variety of factors.  For example fatigue (such as a 4-6 hour ride), or power output level, fit changes, or injury.  As one that has a lot of historical power meter data to look at (often 3-4 power meters at once, including left/right capabilities) it’s easier for me to understand my own patterns.  Whereas most riders wouldn’t have a vast library of data to reference with multiple power meters over long periods of time to develop patterns.

The point here being to simply understand the limitations.  It doesn’t mean I wouldn’t recommend such a system – as I certainly do in specific price/functional scenarios (such as in the case of Stages at that price point depending on how you plan to use it).

The ROTOR LT is scheduled to be available in the coming weeks.  Given the unit is basically just half the existing ROTOR system with a slightly different firmware – this is a reasonable timeframe in terms of them being able to deliver.  The unit will be available in the following models:

From a price standpoint the ROTOR LT will be US$1,490/€990/£799, which does however include crank arms but not chainrings. 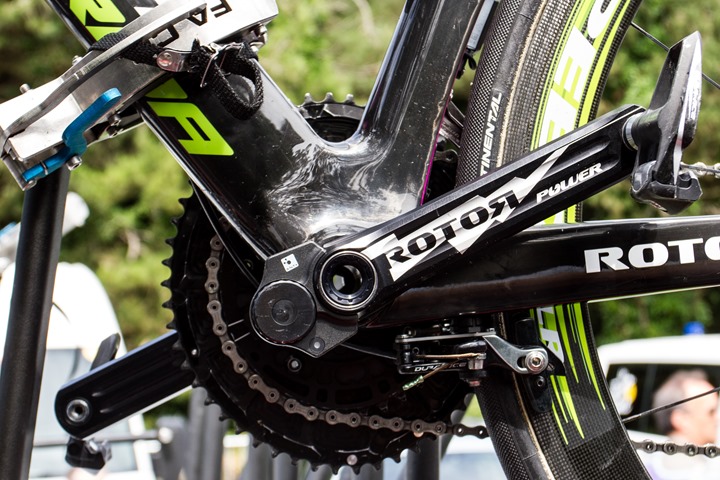 However, with that said – I don’t get the pricing.  It makes approximately zero sense.  Why on earth would I pay $1,490US for a single-sided power meter when there are plenty of very good options that accurately capture both sides for the same price (or even lower)?

While their existing full ROTOR Power system is priced very high at $2,350, at least it was in the ballpark of other similar system (albeit the high end of that ballpark).  In the case of the LT though, it’s basically double the price of the Stages Power Meter ($699).  And also in the case of the ROTOR LT, there’s nothing it really offers beyond what Stages can do.  In fact, one could (easily) argue it does less.  For example, ROTOR doesn’t dual-transmit ANT+ and Bluetooth Smart like Stages does.  Nor does it include Stages new high-speed data mode (targeted at track athletes).  Nor can you install it on 3rd party cranks like Stages can  be.

From a weight standpoint Stages only adds 20g, while ROTOR has previously stated 30g additional for their dual-system (it’s unclear if the single system is exactly half the weight, thus 15g).  Note that it’s very difficult to exactly compare weight differences because of the way the two companies sell the products.  So at most you’re looking at a 5g difference.

But ultimately the problem for ROTOR is that they aren’t actually competing with Stages at this price point.  Rather, they’re competing with everyone but Stages.  And in that race, they lose horribly on price.  First, you’ve got Garmin Vector priced slightly higher at $1699 (but with a $200 rebate down to $1,499).  Then you have the SRAM Quarq RIKEN at $1,200US.  Next is Power2Max at $1,099.  And finally, the veteran PowerTap at $789.  And all of those accurately capture power from both legs, and all of them have far more flexibility in cranks/chainrings than ROTOR.

So in summary while it’s great that ROTOR is adding products to the market, I’m just entirely unclear who their target market is.  But, as I’ve long ago learned in cycling – there’s a buyer for just about everything.