A brief weekend at home celebrating

After speaking at the ANT+ Symposium on Thursday, I caught a flight back home to Paris on Friday morning, which ultimately would plop me at the Charles de Gaulle airport at 9:25AM Saturday morning.  In general, when coming from west coast-ish destinations to Europe, you can just pretend that 24 hours simply vanished.

No doubt that most of you reading would say it would make more sense to simply stay put in North America, rather than come home for 48 hours only to go right back to North America.  But, that would mean I wouldn’t get to hang out with The Girl for nearly two straight weeks, and further – I wouldn’t get to help her celebrate the CupCakery’s 1-year anniversary.  Yup, crazy as it may seem – it’s been open a year! 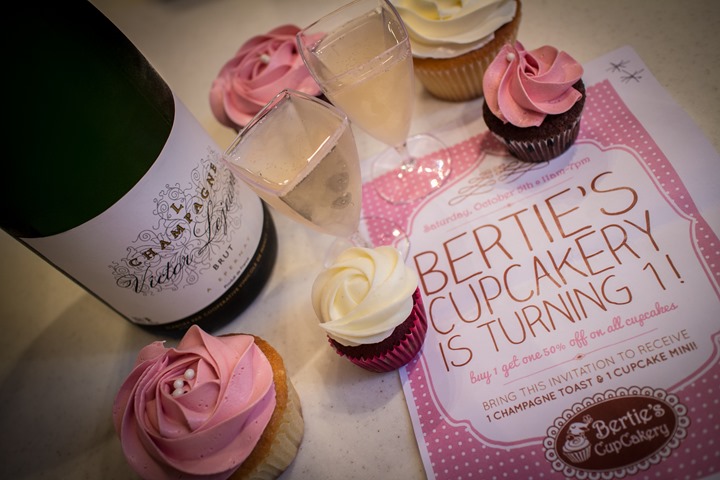 She had all sorts of things planned for the day, and I definitely wanted to help and be part of it.  Now, by ‘help’, I mean – mostly just watch, take photos and then eat the occasional cupcake. You know, quality control and all. 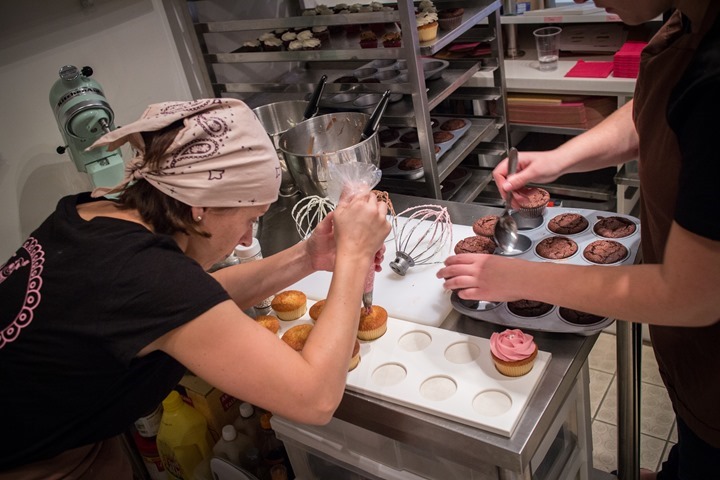 I also had duties as Chief Champagne bottle opener.  Which did include as well the kids version – Sparkling Apple Juice. 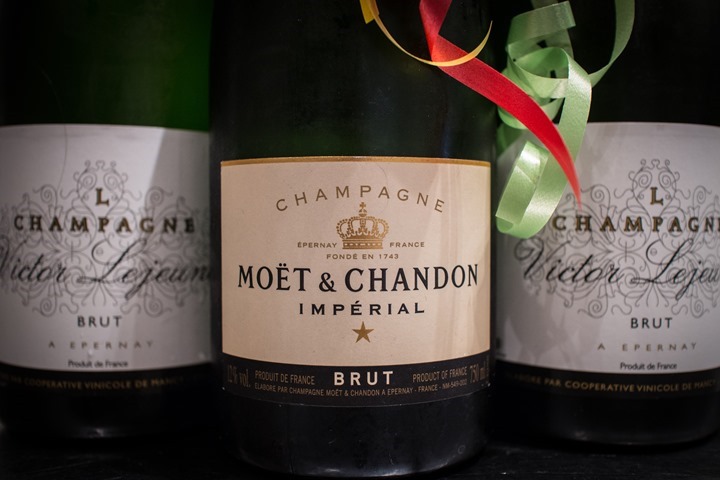 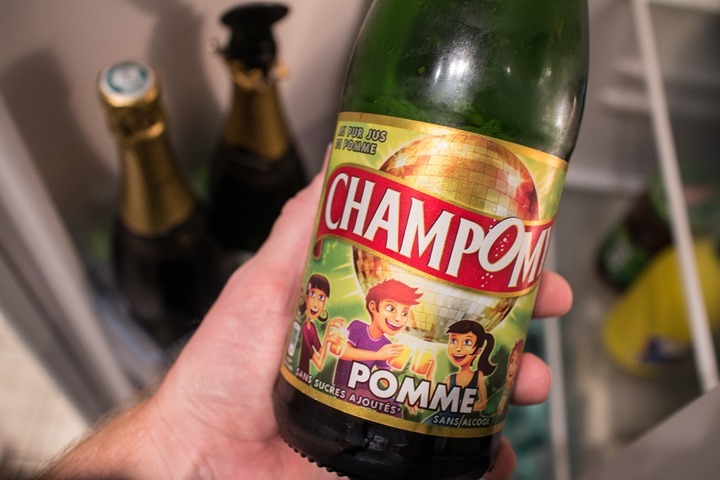 Of course, I’ll save all the details for a post by The Girl at some point in the near future.  But I’m super-proud of her for opening a now thriving business in a new country, all less than three months after we moved over.

It was late Saturday night by time we finished up at the shop.  We stayed open later than usual, in part because of the anniversary, and also because it was the annual ‘Nuit Blanche’, which simply translates to ‘White Night’.  The Saturday evening is designed to celebrate the arts within the city and is incredibly popular.  Many museums and galleries stay open into the wee hours of the night (2-3AM), and there are tons of celebrations around the city.  People are out walking around everywhere – with unrivaled crowds that time of night.

In many ways, it’s sorta like New Year’s Eve in October.  They even have dedicated iPhone and Android apps to find your way between the activities.

While we were both too exhausted to wander about, we did get to enjoy bits of it as it passed by our windows.  For example, one of the normal Bateaux Mouche dinner boats had been converted into a boat full of small private tents.  I caught a quick cell-phone snap of it as it went by the window at one point (below).

You can see the little tents both inside and outside, each fully ‘sealable’.  Up top there was dancing and partying that went on until about 2AM.  At the same time from 12AM till 2AM there were fireworks along the river as the boat went by (a few kilometers away).  Now, perhaps the best part of this is that the theme for this particular boat was literally “One Night Stand”.  Mince words about the purpose of said mini-tents they do not! 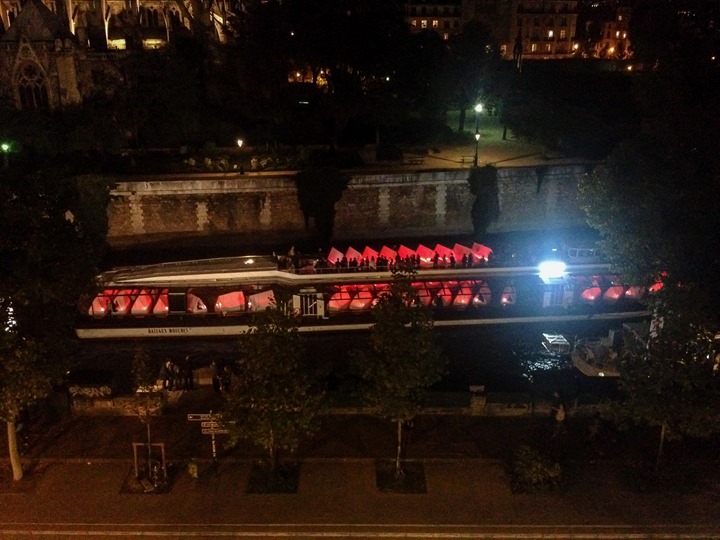 Despite being tired, I simply wasn’t able to sleep.  Sorta that weird ‘so over the top jet lagged you’re actually not tired anymore’ feeling.  Sometimes I’m able to get in a groove and snap right back between timezones, but this wasn’t really the case.  By time I fell asleep it was pretty much light out.

So by time I headed out for my run it was much later in the afternoon.  Nonetheless, it was still packed out with people enjoying a beautiful day, as I started off my 10-miles of fun. 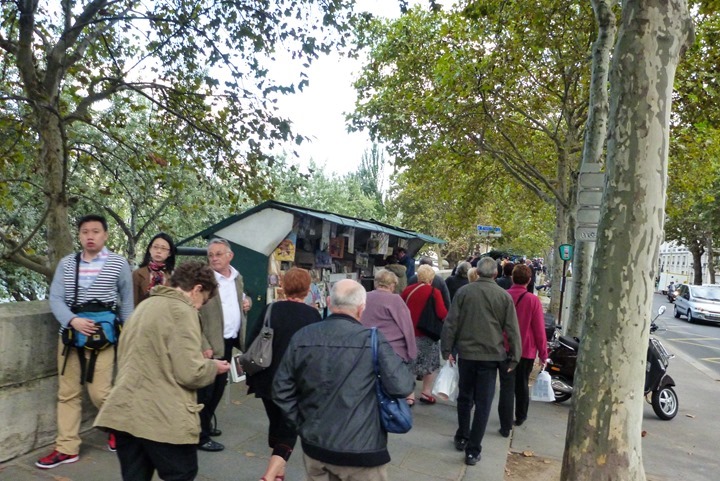 At any rate, I plodded along per ‘my’ variant of the plan.  First up was heading past all the summer pop-up restaurants that were being disassembled.  Goodbye fabulous meat and cheese platter place. 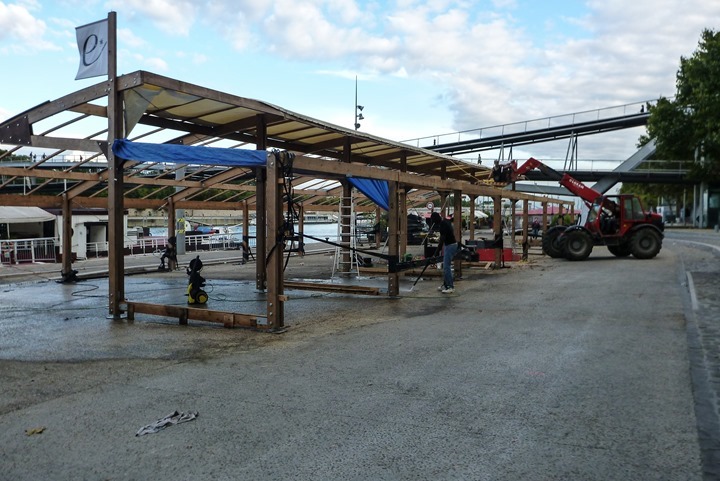 A short bit later I then crossed the river and hit up the running/cycling path.  This path goes for many dozens of miles, but I’d only need a short bit of it.  I’ve been trying to avoid running this direction during the summer since I do a lot of long winter runs here and don’t want to get too bored of it.  For long runs where I want the pace to be really stable, this is a much better route than some of the more fun inner-city routes. 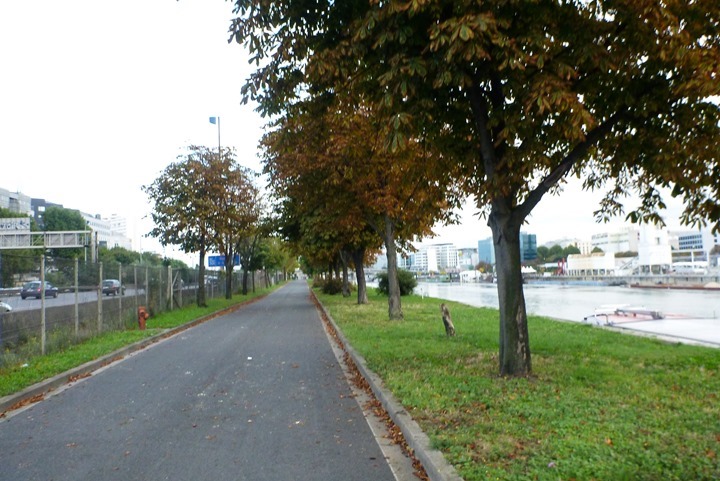 Ok, so a look a little bit drunk in this one.  Usually I take 2-3 shots, just in case one is bad.  I neglected that procedural item this time. My mistake. 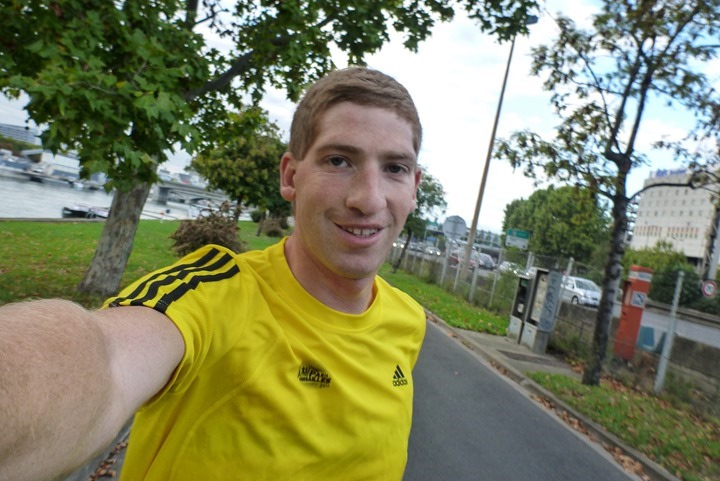 Given the nice afternoon I got caught up in a bit of bike traffic.  Somehow, I was actually running faster than they were biking.  It’s rare I have to overtake half a dozen bikes. 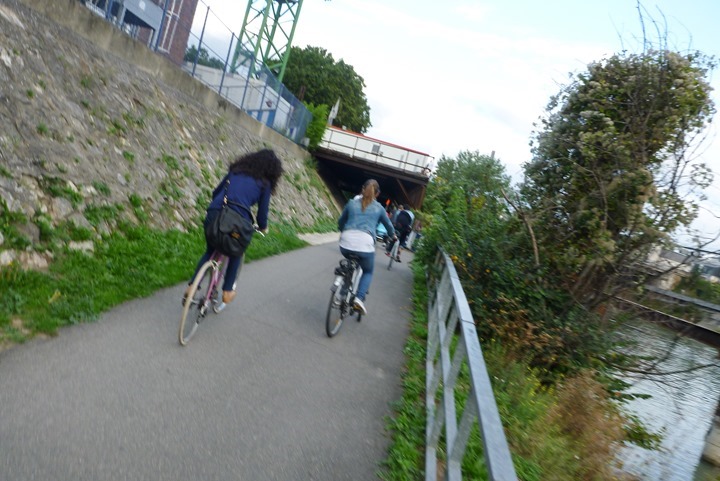 It’s always fun to see other runners out there with either the same shirt you’re wearing, or one from another event you’ve ran (below, from race last weekend).  Interestingly – for the first time ever over here I also saw a guy wearing a Nation’s Triathlon race shirt. 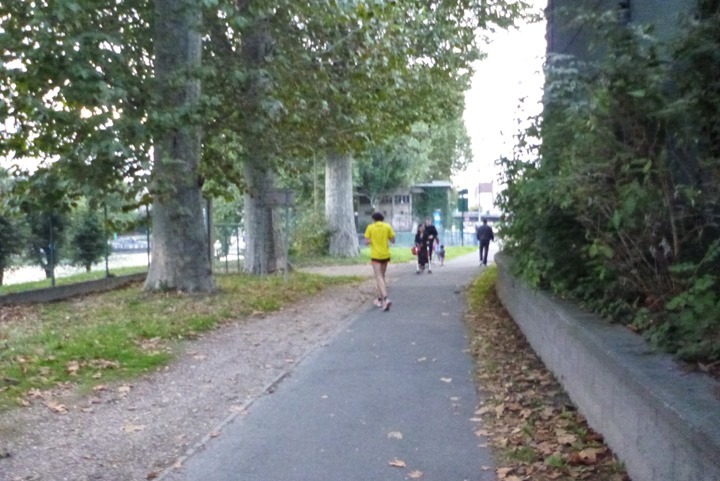 The second half of my run was intended to be at a 6:45/mile pace, but I had a HR cap on it – designed mostly to protect myself from going too hard.  In my case, the cap was hit within a couple of miles, simply due to fatigue.  My legs felt fine, but honestly I felt like I could have crawled under a tree and fallen asleep mid-run.  In the end it kinda worked out well that I misread the workout instructions.

Coming back towards the house I passed a film crew shooting a timelapse.  I often see folks doing timelapse shots in/around Notre Dame, but these guys brought it to a whole new level complete with a laptop mini-studio setup and traffic cones. 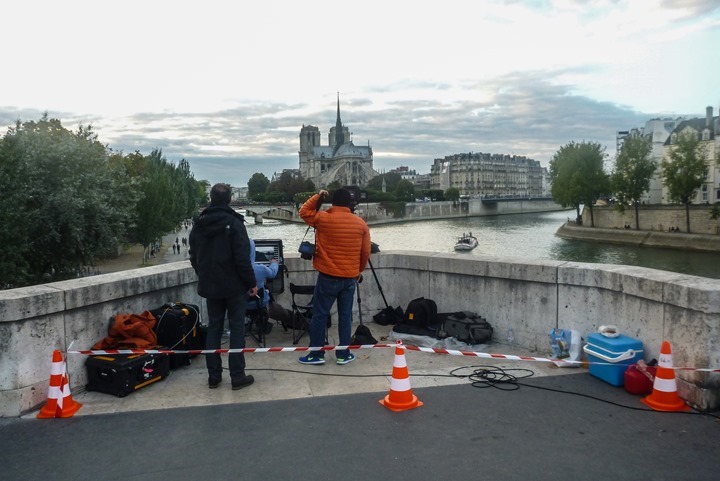 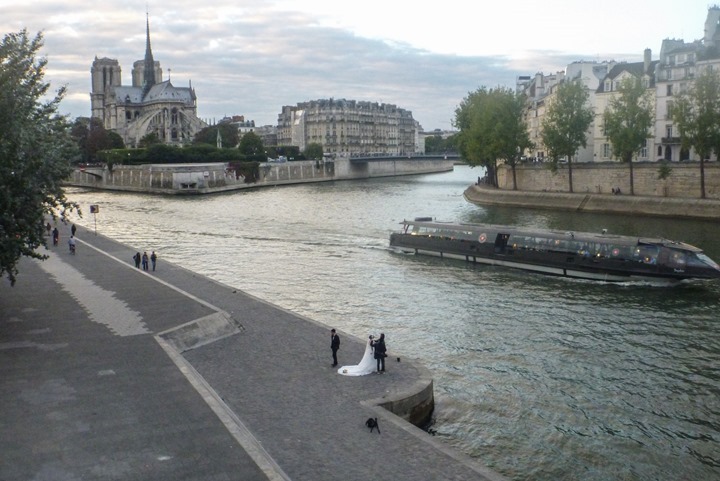 As I wrapped up at the base of Notre Dame I checked in on the pumpkins hanging out in the gardens there.  I’m amazed that nobody has vandalized these since they were planted earlier this spring.  Hundreds of thousands of visitors stream through this park each summer, and these guys stayed just fine and dandy.  Shows you a bit of respect that the French (and visitors) seem to display here. 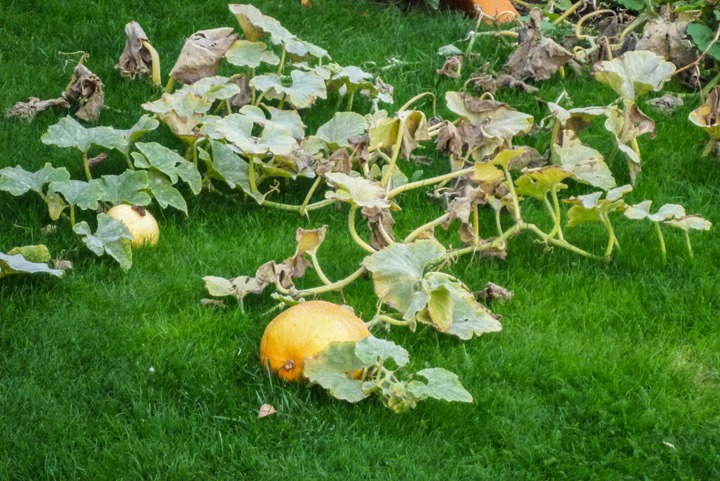 Or perhaps it’s just that they are guarded by guys with some form of automatic weapons.  Either way, whatever works. 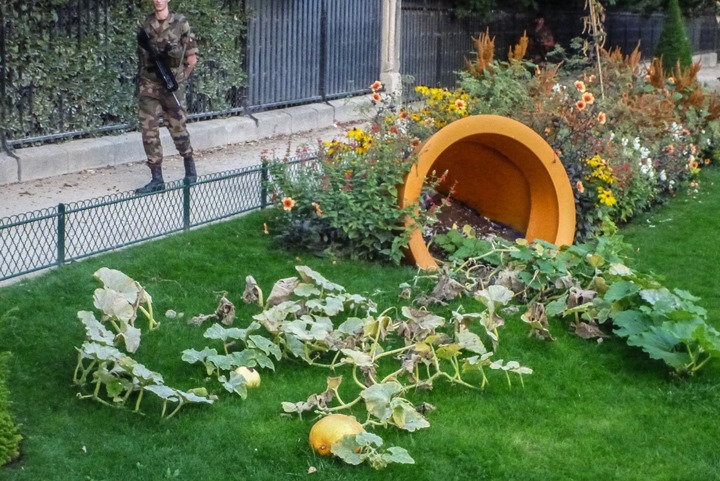 With that, I spent Monday working my way towards Madison, Wisconsin for my meetings with Saris/CycleOps/PowerTap on Tuesday.  The flights didn’t go very well, with all of my flights being delayed and causing misconnects.  But eventually I made it.  Below, flying into Madison: 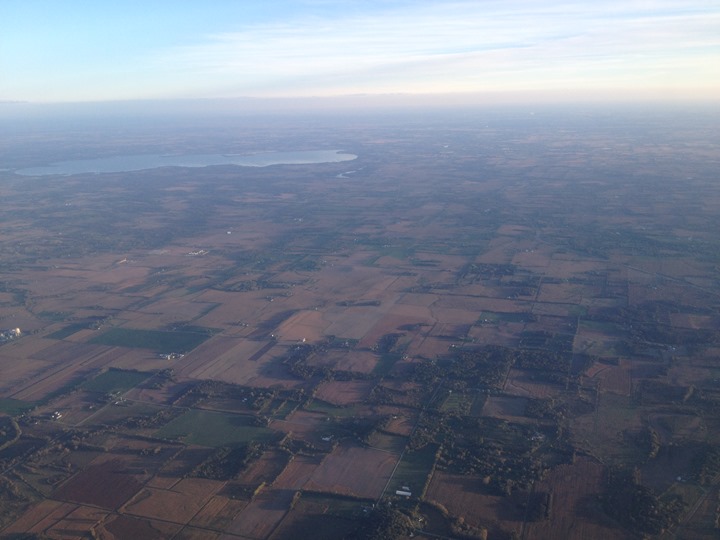 With that, meetings in the morning, and then more flights in the afternoon off to my next city.