Watching a high-speed bike-sharing police chase, and other weekend updates 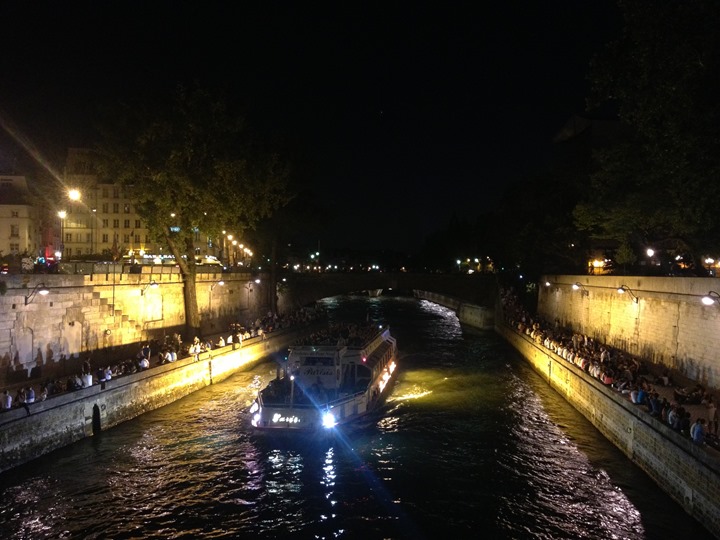 Woot, a weekend back home!  The weather up until Sunday was rather warm – about 80*F in fact.  Which meant the crowds have been out in full force.  Here’s what it looked like on Friday night out along the river.  Most folks were there till at least 1-2AM.

On Saturday morning I spent much of my time being an Air Conditioner installation man.  By the end of the weekend, I’d have installed two of them at the CupCakery.  Our previous unit that we got last fall just wasn’t cutting the mustard in this ‘heat’. 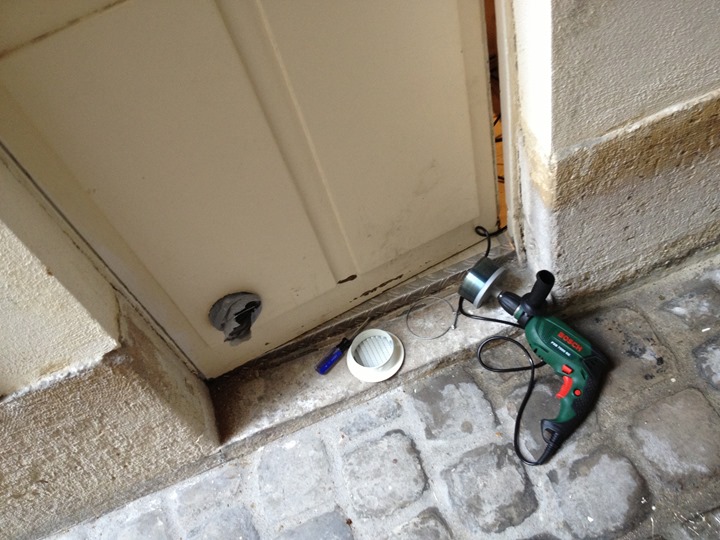 Also in two’s was the drill.  The first one caught on fire.  Well, sorta.  It was actually smoking, a non-happy smoke.  And we had only just bought it an hour earlier (our other drill wasn’t strong enough to make it through the door).  So two drills, and two A/C units.  Thankfully, all that did the trick and we were back in full swing by mid-day Saturday.  Crisis averted!

After all that was said and done I headed out on a nice 90 minute run.  I probably should have named it the wedding run.  On Saturday I probably saw half a dozen brides out and about getting photos done. 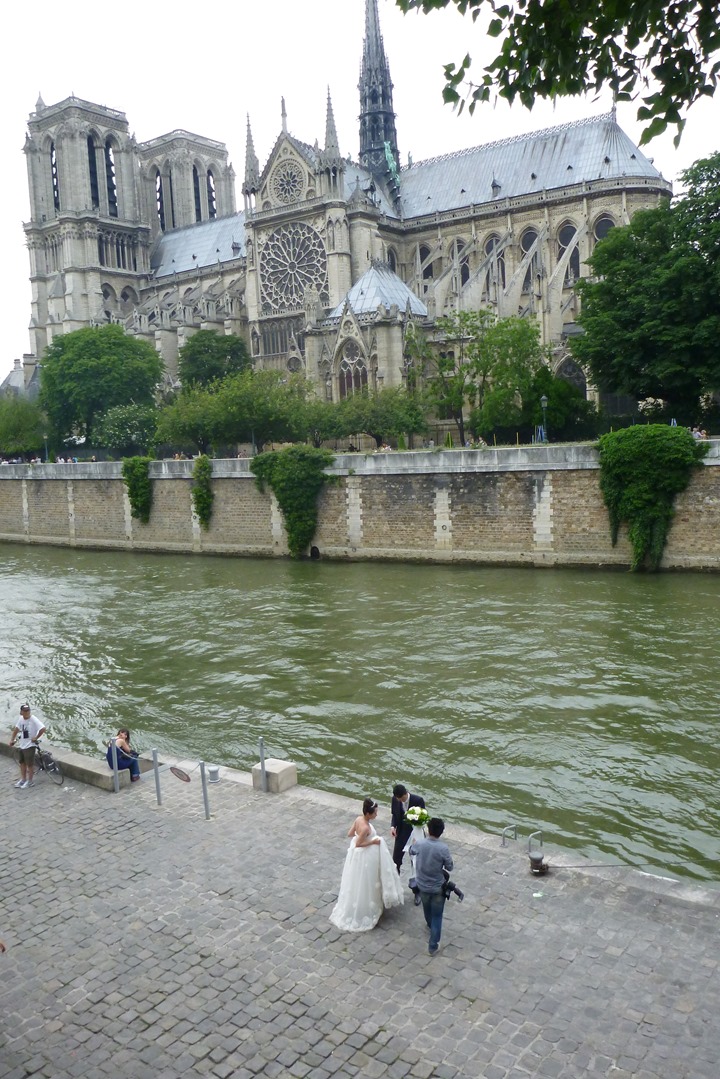 Now the vast majority of wedding photos here in Paris are just that – photos, and not an actual official wedding.  The reason is that local laws require a fairly significant permanent stay here (40 consecutive days) prior to getting wed here.  Most of the couples will instead rent the dresses for the day, along with a photographer (we see the same dresses used by the same photographer near daily).  It’s all very popular here, especially amongst those from Asia.

Interestingly, one couple I did see on Saturday did actually appear to be local – primarily in that it was a large family/wedding party that was all speaking French as I ran by (most wedding couples we see are just bride/groom with photographer). 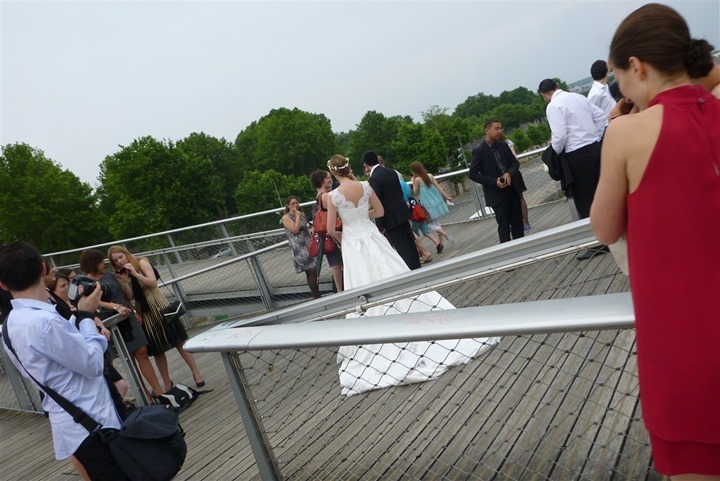 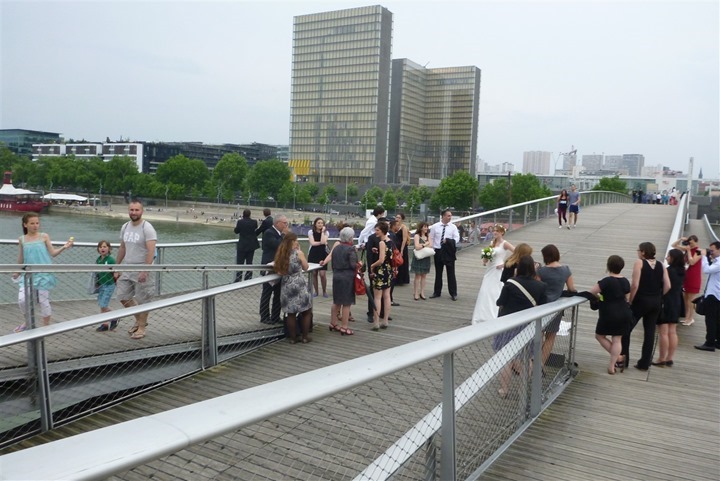 Once past the double-decker bridge, I headed up through a park before hitting a long trail out of the city: The trail meanders, and eventually passes a track.  I’ve been meaning to figure out exactly how long each loop is, but it was locked up today.  I’m reasonably sure it’s not a 400m track though. 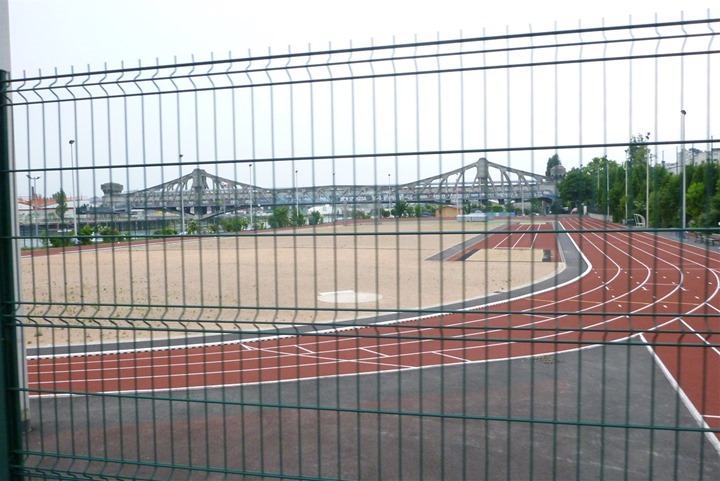 As I headed back across the bridge an hour later I looked down at the pop-up restaurants that have show up in the last month along the river.  They’ll be there for the summer.  Plenty of tables with awesome looking platters of meat and cheese: 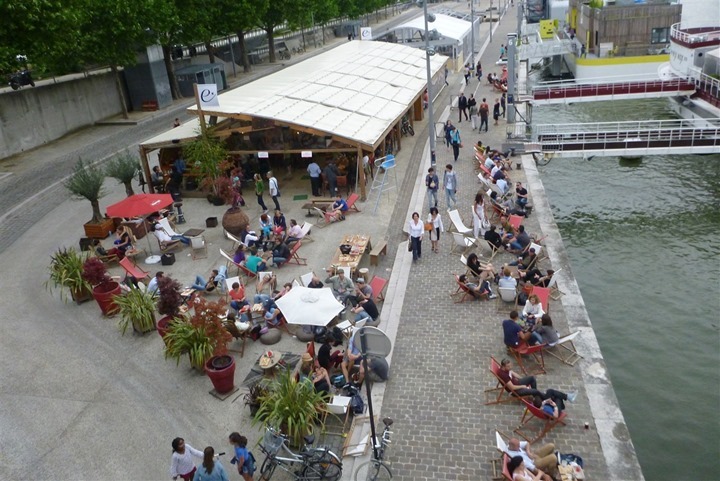 I’ve gone out for a couple of runs now with the Leikr watch.  This was the Kickstarter project from a number of months ago.  They’ve delivered a handful or two beta units to various folks, from media to pros to those who paid for early access. 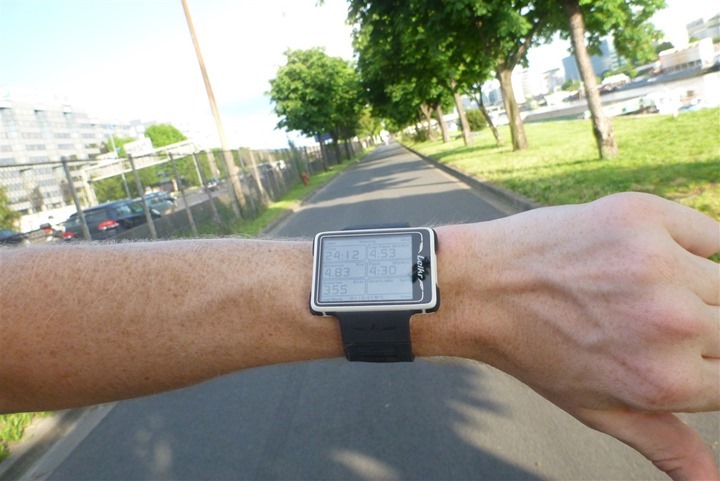 I posted a slew of unboxing photos up in The Queue in a gallery.  But here’s a few more from my run: 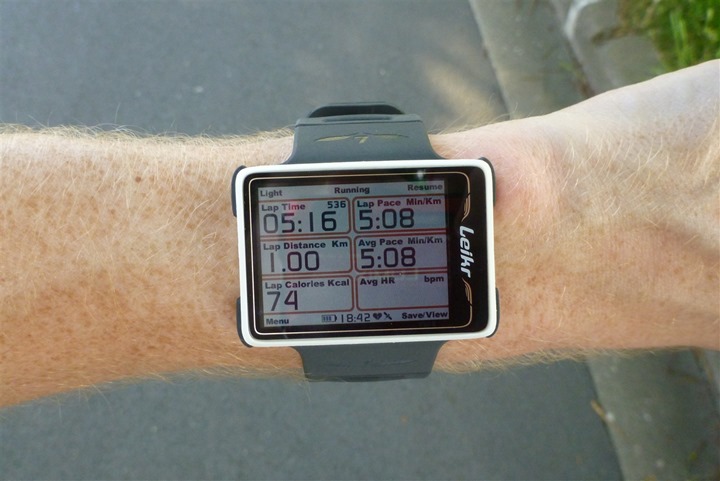 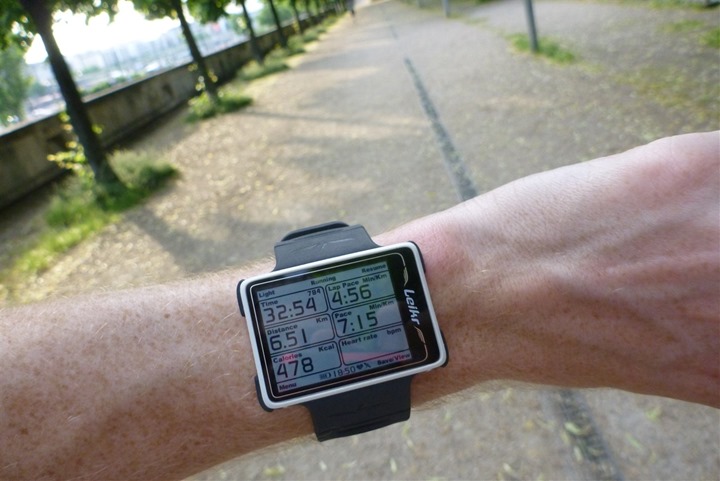 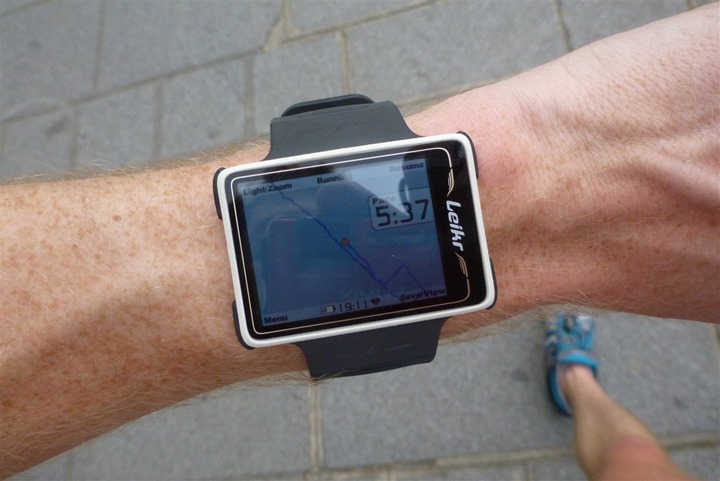 As with anything, I’m always testing it against one or more other watches.  This being no different.  And, I’m also testing it out cycling as well: 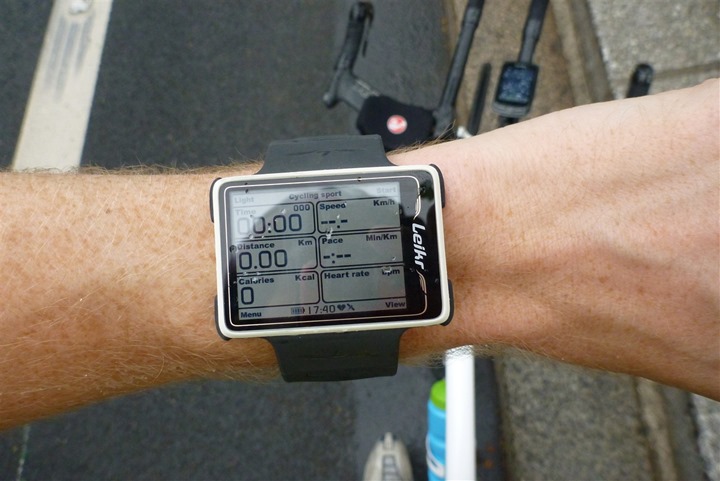 At this point I don’t have a date for a review, simply because they haven’t released a date for when the unit will ship.  Once that’s established, I’ll work towards a review timed to that date.  As always, my line in the sand (unless otherwise noted) is when a company believes the unit firmware/hardware is final, or the company is fine with me posting any bugs/etc on a beta unit.  That could be August,  October or December. I simply don’t know.  That said, I’m reasonably confident it won’t be next week. 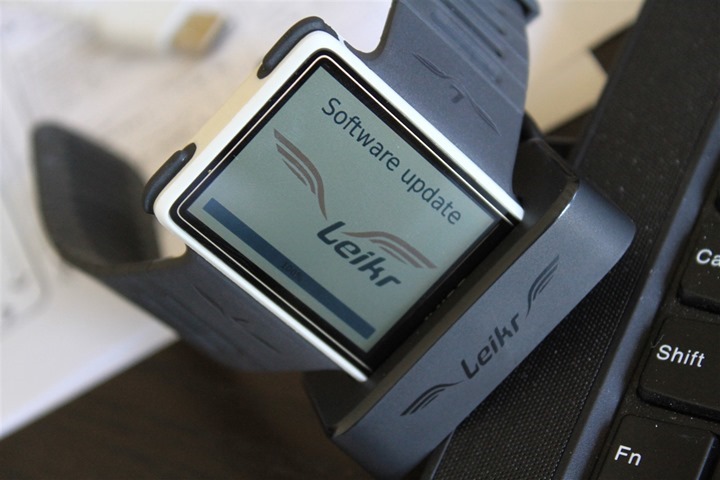 On the list of things much closer though is the 4iiii’s Viiiiva unit.  This has been on the backburner for a while since the unit first arrived in February, primarily because they were working through a number of issues (some I raised, some previously known).  However, in the last month they’ve pushed out a new hardware unit, along with new firmware, and based on things in the last week I believe it’s pretty solid right now.  I’m using this final firmware version to run through various tests for the data I need and then I’ll have it published. Anytime a product is focused on being a middleman in data, there’s a lot of validation to do – especially when power meters are involved.  As with other reviews, I’ll make all the data available in the review for those to dig into as well. 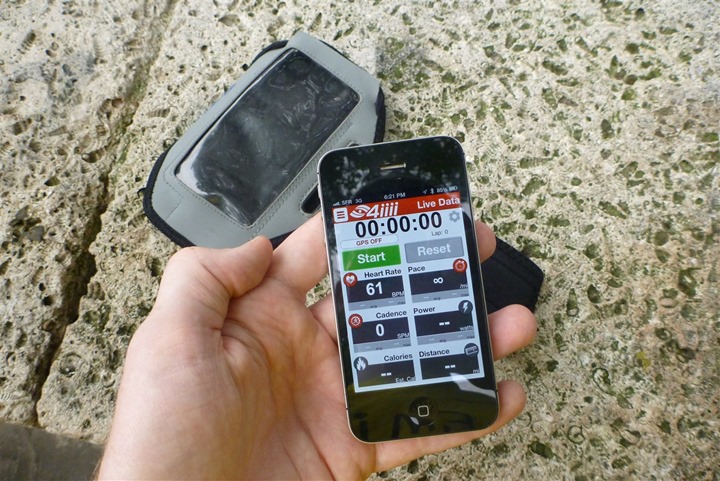 For example, I used it to compare against a Garmin Edge 800 on my Sunday long-ride, collecting data side by side from the same power meter. 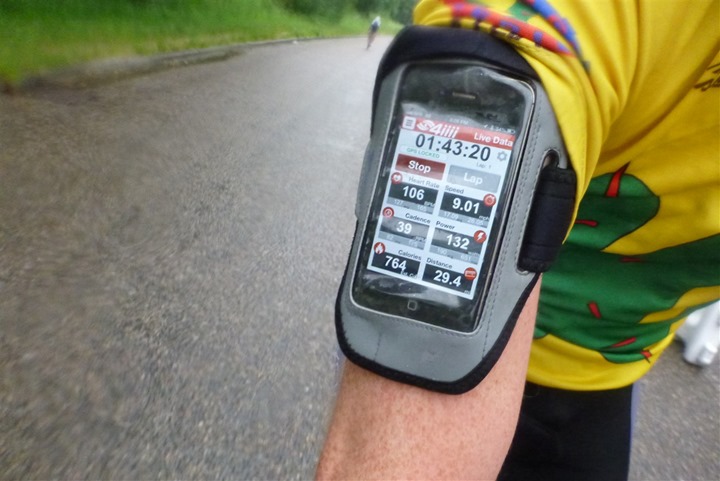 I can’t say it was the most enjoyable ride out there.  Not because of the ride, but because of the weather.  Somehow, for the one activity I prefer the heat for, it turned to a relatively cold and rainy day.  The Girl pretty much summed it up at the start of the ride waiting for satellites: 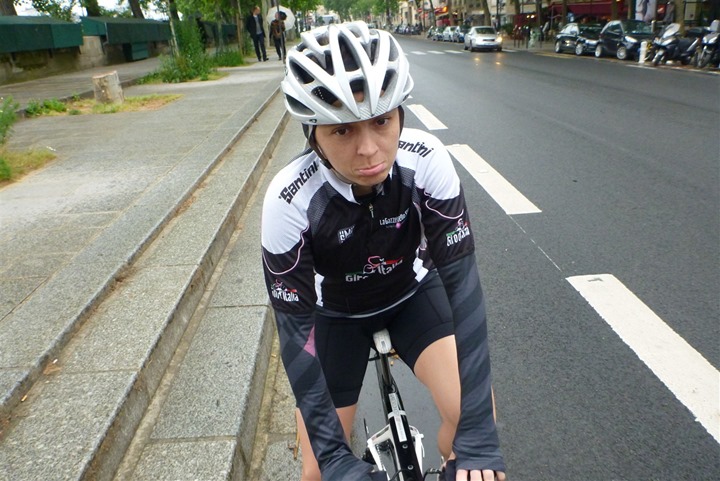 Yup, that’s about it.

We headed up to Longchamp, merely since we were starting at 6:30PM (for a 2+ hr ride), we figured it was a well known and straightforward route.  Gotta love that it doesn’t get dark till 10:30-11PM at night here. 🙂

As we approached Longchamp we watched the last of the spectators and workers file out of the French Open venue, which wrapped up today: 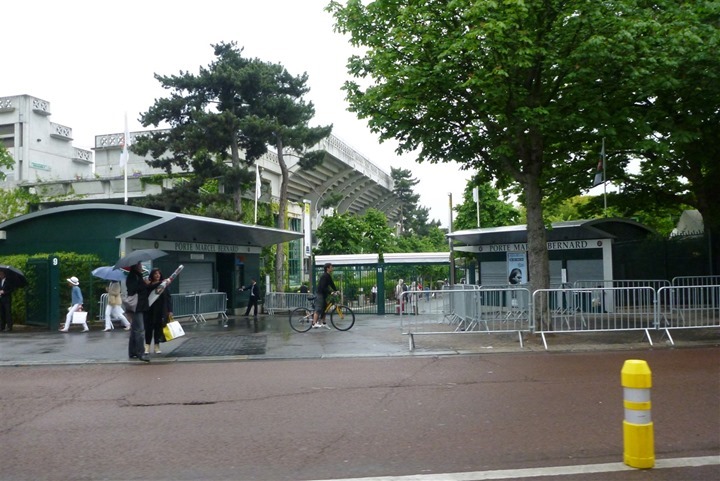 Once at Longchamp they had setup some sort of traffic barriers in the last week or two.  I’m not quite clear on why (I don’t remember them there last summer). 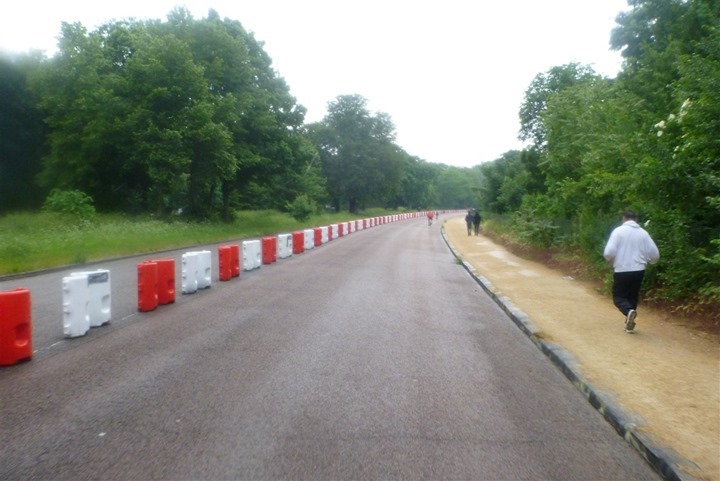 We did endless loops for the better part of 2 hours before coming back home.  There wasn’t many people out there this time of night, nor in these weather conditions.

As we made our way back home, the Statue of Liberty greeted us: 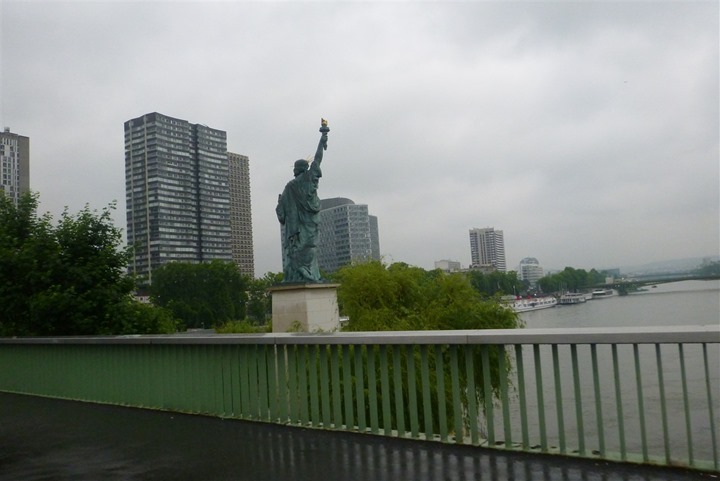 Then, the Eiffel Tower as well: 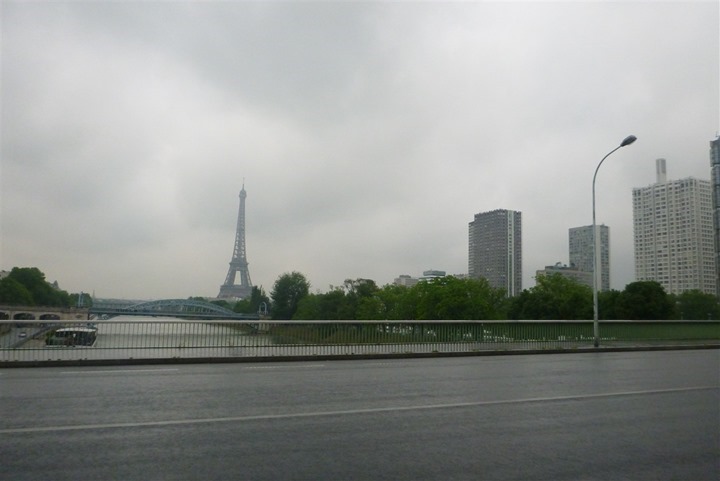 There’s few stretches of grade-separated bike lanes in Paris that work well when riding at faster speeds, but given the lack of people out and about today due to the weather, this little section just after the Eiffel tower was nice and empty: 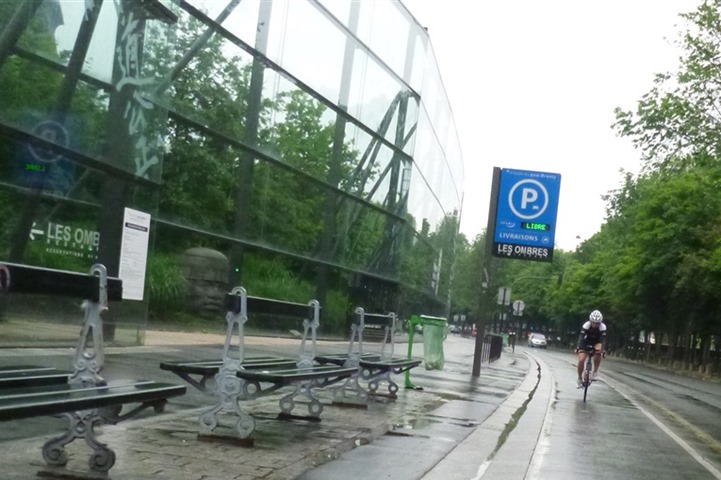 With that, I leave you with one final set of images: A high-speed police chase with bike share bikes.  Yes, seriously.

Just as we finished our Saturday night long runs (we met at a predetermined time/place for the final cool-down), we noticed up ahead a police car in the bike lane, and then a guy on a Velib (our bike share system here in Paris) coming at us full speed while on the sidewalk.  Given there was a bike lane right there, it seemed odd to be on the sidewalk (which requires steps to get up to), and especially at such speed.

After coming within an inch or two of slamming into The Girl, he lost control of the bike and it slide out from under him.  For better or worse, he appeared largely uninjured and took off on foot.

The police officer was then running alongside the police car (was being driven by another officer).  Though, Mr. Bolt this officer was not.

Yet somehow, inexplicably, this kid couldn’t get away.  Nor could his buddies.  Clearly they were not terribly bright.  The tiny European picturesque streets he ran off into should have made his getaway a piece of cake.  Even more so with the speed-challenged police officer.  But a minute or two later they were dragging him back.  Along with three of his buddies and their respective Velib’s. 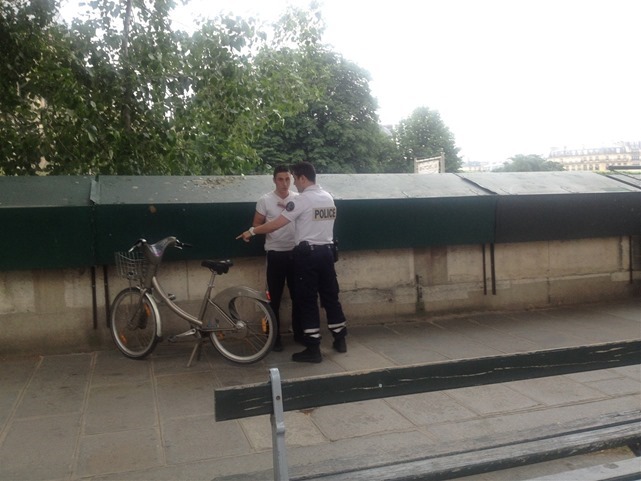 We’re not clear what they did – or why they selected the 40+ pound Velib’s as their getaway vehicle, or why they were unable to outrun the police officer when he was running slower than a group of nuns walking into Notre Dame…but, as they say in France: C’est la vie. 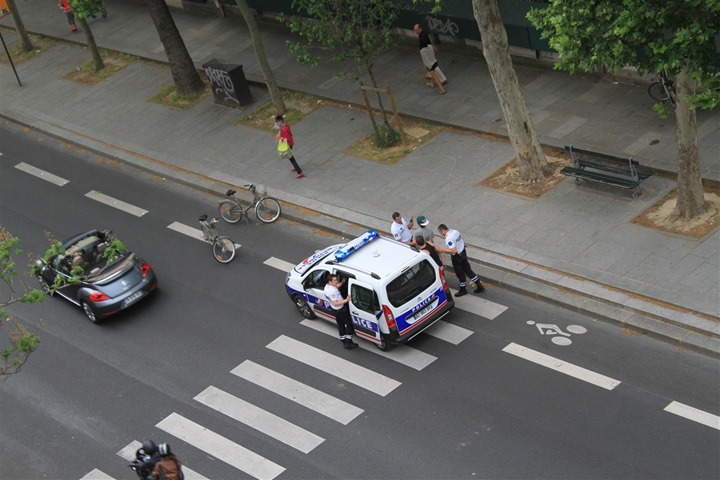 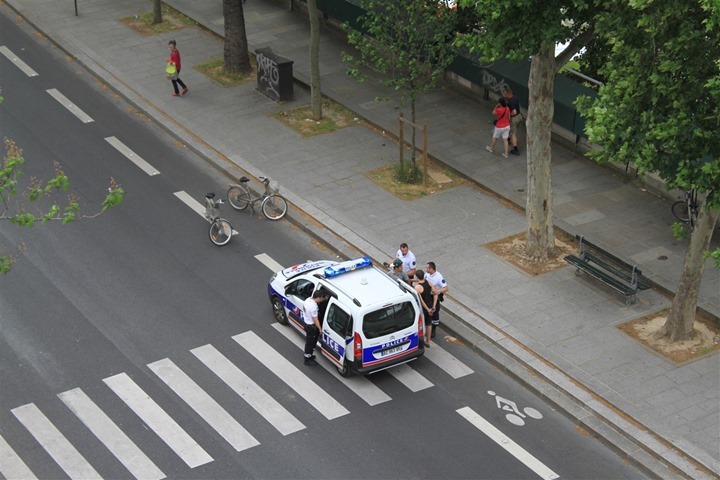 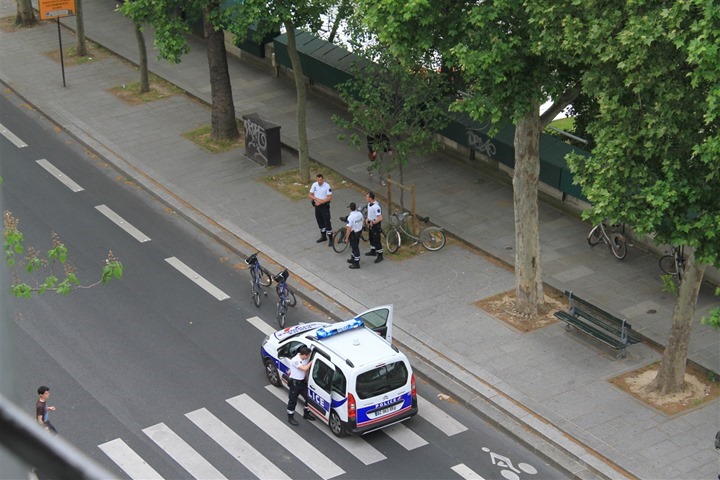 Obviously we watched from our window for the better part of 30 minutes as they lined up all the ‘borrowed’ Velib’s and then transferred the handcuffed non-bike-racers into various police vehicles. 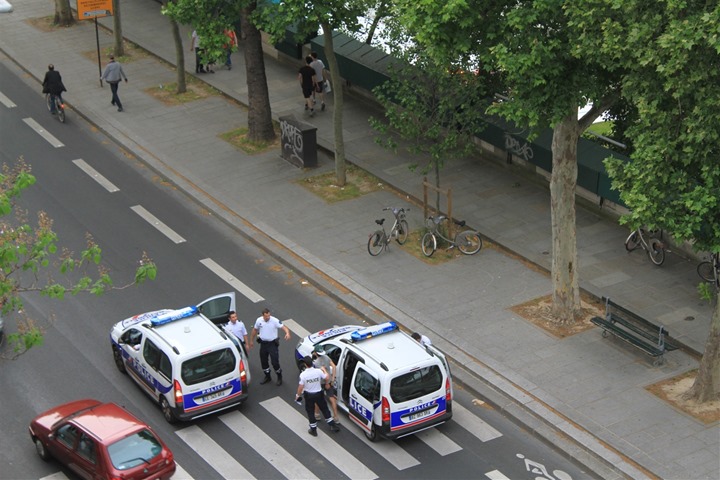 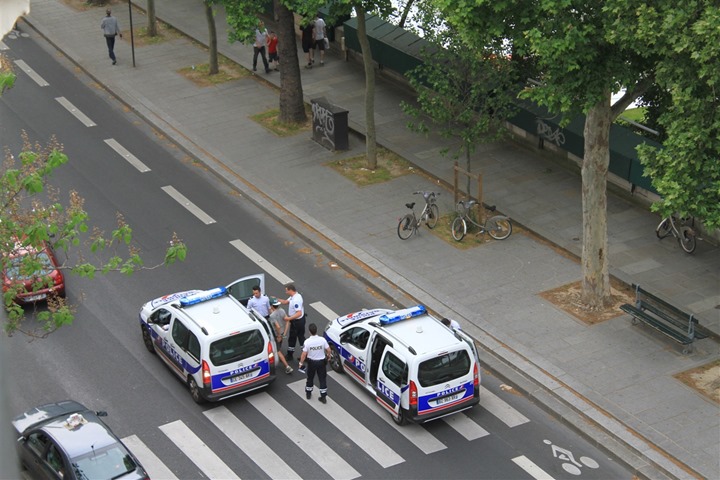 Yup, just another day from our window.  Oh, and to clarify, yes, I saw Nuns in front of Notre Dame on Saturday too: 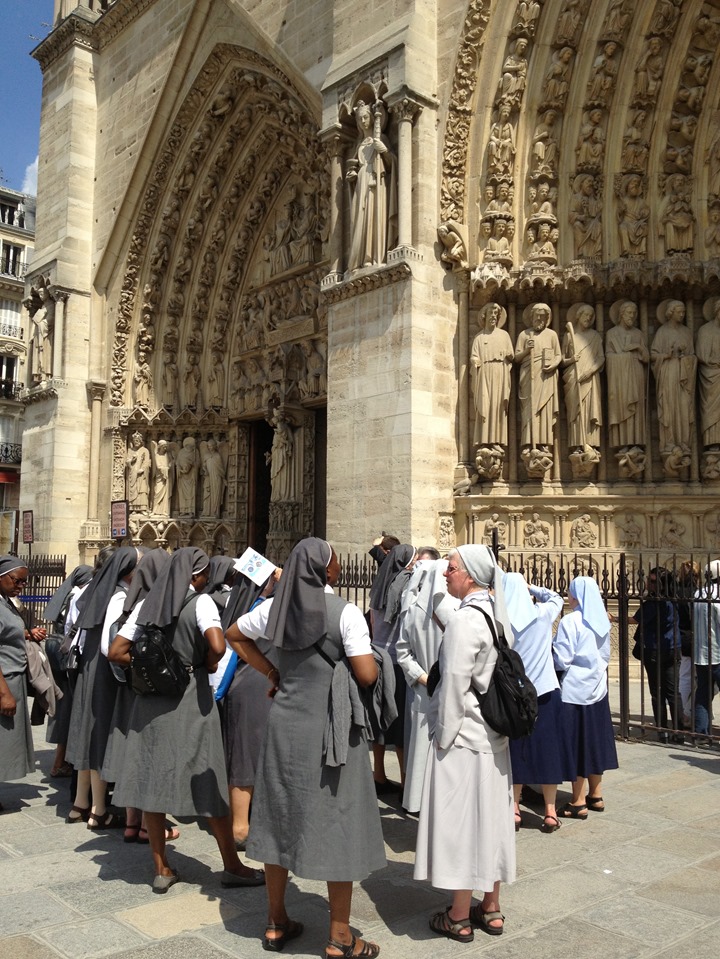