An inside look at my bike toolbox 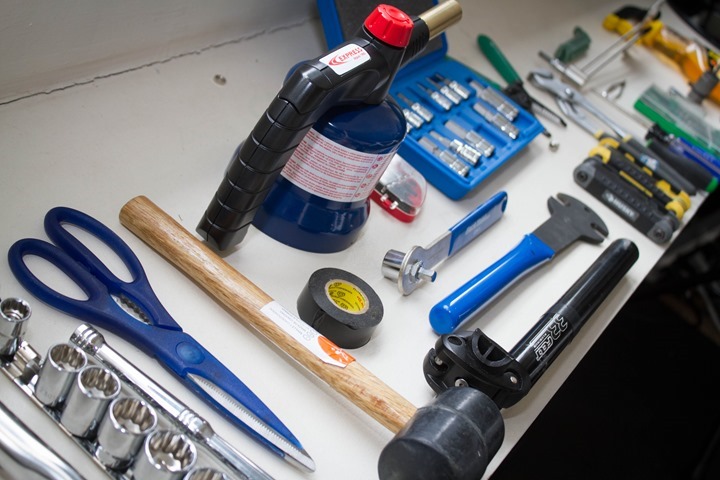 Well, an inside look at my bike cardboard toolbox anyway.  Actually, it’s half split between a cardboard box and a plastic bag from the grocery store.  With a few oft-used items in a 4-cup measuring cup, sorta like how people put pens in a mug.  I have an official bike toolbox, but this won’t all fit in it, so there’s some other bike junk/parts in there right now.

Of course a better question is how exactly I got to this post.  See, it all started here: 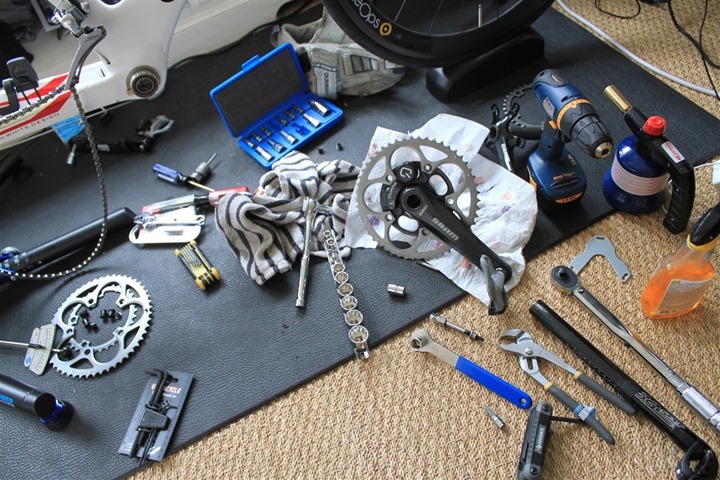 With, yes, a blowtorch.

I was in a bit of a losing battle to remove two stuck chainring bolts that were spinning endlessly.  While I eventually won that battle with another trip to the hardware store  to buy a screw/bolt extractor kit, it got me thinking about all the tools I had lying around that I use to fix things on my bike.

So since I had already created a bit of a mess I decided to just go all-in and lay everything out.  Which, is how I ended up at this:

But, what are all those tools?  Well, let’s go through them all one by one.  And then I’ll talk about the ones I actually use on a regular weekly basis. 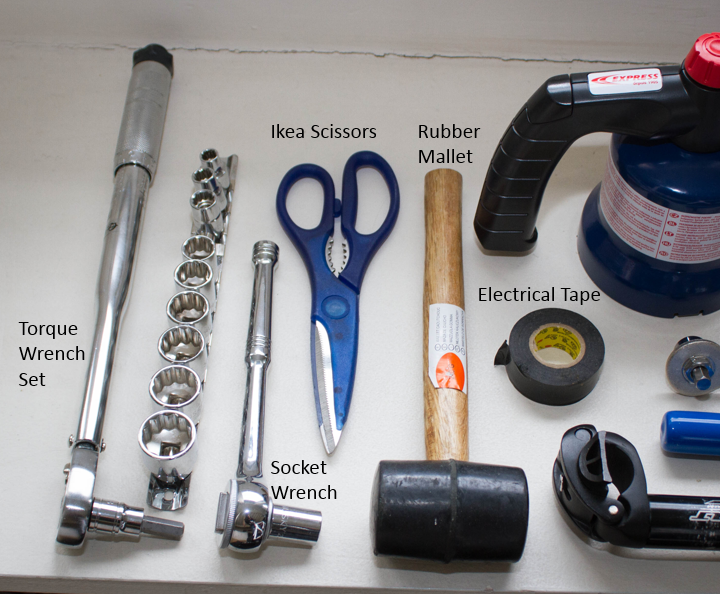 Torque Wrench: Used for correctly tightening bolts and other parts on bike, allows you to set a torque value and ensure you don’t over-tighten.
Sockets for Torque/Socket Wrench: To accommodate various socket sizes, though I pretty much only have ever used one of them.
Socket Wrench: Used for tightening bolts and parts on bike with no regard for correct torque value.
Ikea Scissors: Because it was cheap.
Rubber Mallet: For removal of parts (such as the Rotor Cranks), when pure pressure just won’t work.  Safer than a regular hammer.
Electrical Tape: Look, it’s there, sometimes stuff just happens and you need a quick fix.

With that, we’ll continue sliding to the right. 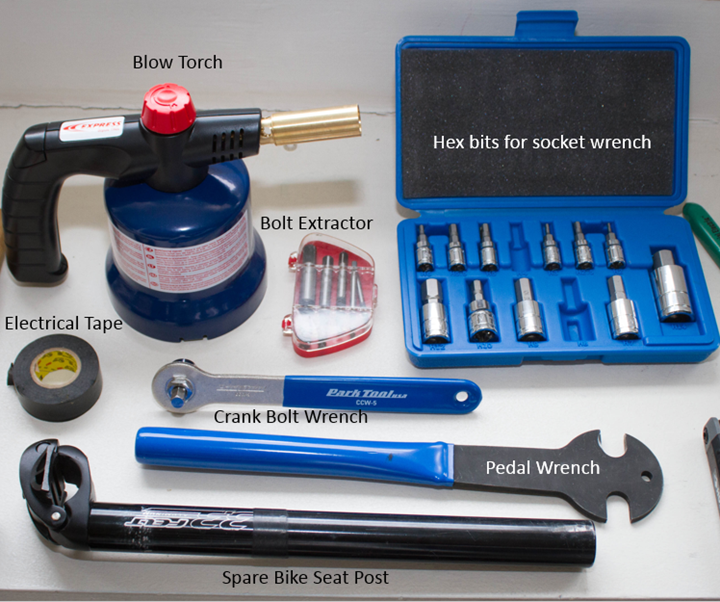 Next section we start getting into a few of my more commonly used items.

Blow Torch: When the going gets really rough, sometimes you just need to apply fire (or rather, heat).  This is best found at Home Depot or equivalent (the relocation company actually confiscated mine during the move over, so I re-bought this for about $12).
Crank Bolt Wrench: A proper tool for removing a crank bolt, haven’t really found it necessary though given the hex bits and the socket wrench.
Pedal Wrench: Of a few pedal wrenches I have, easiest way to remove pedals (though, a hex wrench works as well).
Spare Bike Seat Post: Awesome tool for applying extra leverage.  It fits over virtually all of the items above, extending the length of the ‘arm’.
Hex Bits for Socket Wrench: Perhaps the most useful set I bought, as it pretty much covers any bit I’d need on a bike.
Screw/Bolt Extractor: Like the blow torch, sometimes you just need to mine it out of there – and the bolt extractor is your last line of defense. 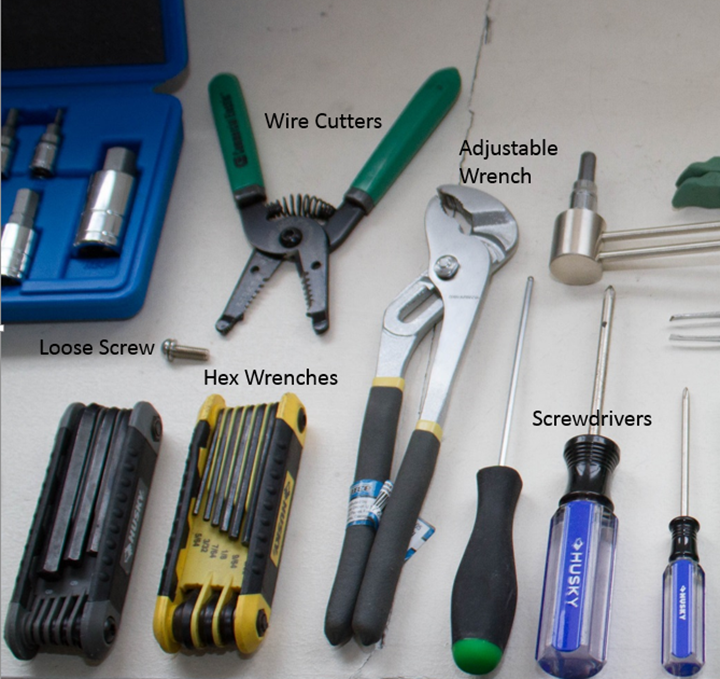 Next, we have loosening and tigthening tools that most folks have hanging around.

And last but not least, the final section. 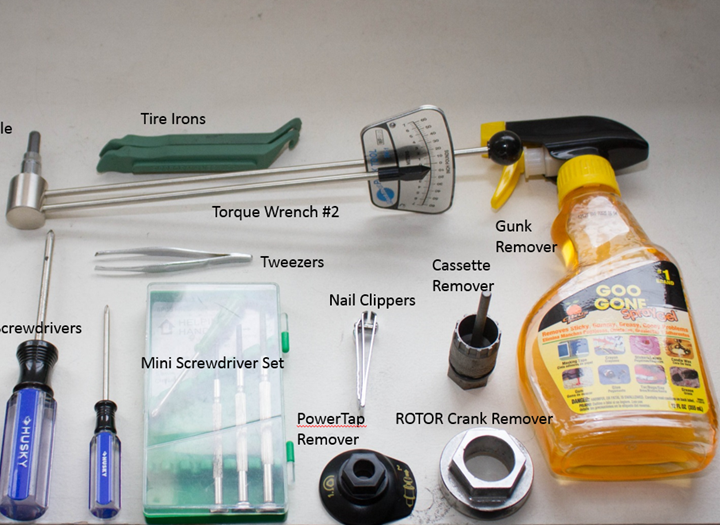 Tire irons: For removing bicycle tires off of wheel frames (must have).
Jewelers Screwdriver set: For tiny screws.
Tweezers: Every once in a while I need to place a small part somewhere, this works for that.
Torque Wrench #2: This one actually shows you your current torque value (I actually have two similar variants of this, I like the one I linked to better than the one in the photo above, as it measures a higher torque value)
PowerTap Cap Removal Tool: If you have a new G3 hub, this allows you to remove the cap (though, you can make do with the adjustable wrench and some patience/practice).
ROTOR Crank Removal Tool: For removing the ROTOR Crank Arm from a crank spider.
Cassette Lockring tool: For removing a cassette from a wheel assembly.
Nail Clippers: Best tool for removing zipties that secure anything onto your bike, usually can avoid scratching.
Goo Gone: For removing gunk built up in places on the bike where normal cleaning just isn’t working.

Phew!  Ok, I didn’t exactly buy it all at once, just sorta a pile of stuff that’s accumulated over time.  And come to think of it, I also have a few other tools like a chain cleaner tool and a cassette brush that were off in hiding while this was taken.  And of course, this doesn’t include any of the electronics tools and/or testing pieces.  This is purely for getting stuff on/off the bike.

So what do I actually use semi-frequently?  Well, here’s my most common go-to pile. 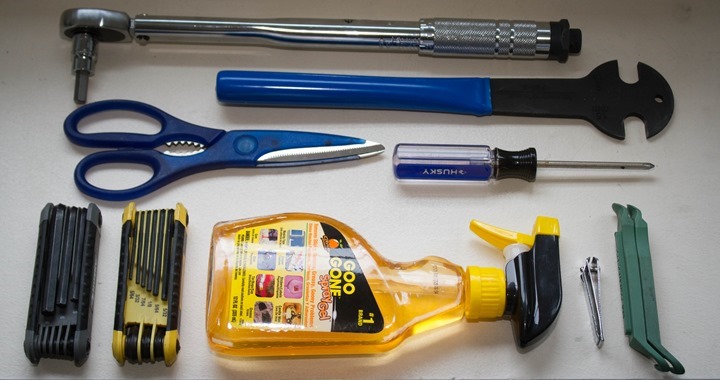 This is just a quick recap of the parts in that picture:

Goo Gone: For removing gunk built up in places on the bike where normal cleaning just isn’t working.
Hex Wrench Set: My most used tools. Period.  Lasting me for close to 10 years thus far.
Screwdivers: There’s a larger Phillips Head screwdriver, a smaller Phillips Head screwdriver, and a Revolights removal screwdriver.
Tire irons: For removing bicycle tires off of wheel frames (must have).
Ikea Scissors: Because they were cheap
Pedal Wrench: Of a few pedal wrenches I have, easiest way to remove pedals (though, a hex wrench works as well)
Torque Wrench: Used for correctly tightening bolts and other parts on bike
Nail Clippers: Best tool for removing zipties that secure anything onto your bike, usually can avoid scratching.

Now again, you don’t need to go out and buy all these things.  In general, you can get away with a good hex wrench set for the vast majority of items.  I tend to be in the unique position having to swap cranksets and/or other bike parts on a semi-regular basis for testing, hence why I have much of what I have.

Further, if you become friends with your local bike mechanic you can further minimize interaction with the above tools.  On the flip side, I’ve learned quite a bit for me being a computer guy, by doing much of my own maintenance.  That’s been even more so evident since my move to France, where trying to converse about bike parts with a local mechanic (let alone getting my bike to the mechanic) is somewhat difficult language-wise.

As for that bolt extractor set, yes, it was a piece of engineering beauty that saved the day in that first picture.  Boom!  Bolt removed! 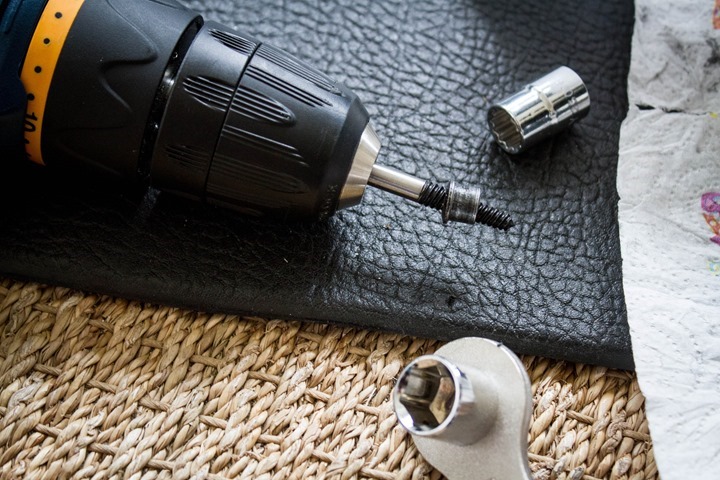 Plus, I even got a next 1-mile round-trip walk to the hardware store out of it…