Tonight marks the beginning of my official training schedule towards the Paris Marathon with The Girl in April.  Lately, I’ve been free-wheeling it a bit on the training schedule, with both work travel and just getting adjusted to Parisian life having taken a bit of a front row seat.  This afternoon though, I dug out the December schedule from coach and dove into more formality in my training.

The scheduled run was a bit under 2 hours wandering around Paris.  I ended up slicing it a touch bit shorter because I didn’t realize I even had a long run until…well…about 30 minutes before I went outside.  I thought it was a trainer ride on my schedule.  My bad.

At any rate, here’s what went out the door with me. 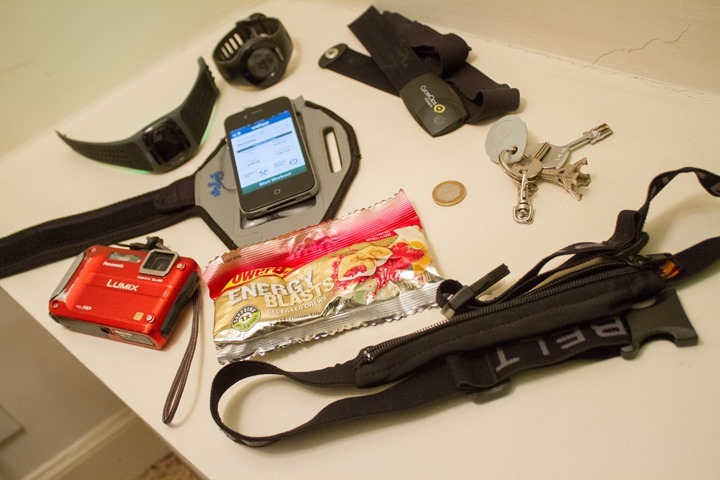 And here’s the textual rundown and explanation:

1) Upper left: Alpha Bluetooth Smart HR watch – I’m testing how well this compares against traditional HR straps.
2) Upper middle: Garmin FR610 – it’s the traditional HR data gathering device, and my pace display for tonight’s run.
3) Upper right: ANT+ heart rate strap.  It happens to be a PowerCal strap, but that’s just because it’s what I have paired.
4) Middle: iPhone with Wahoo Fitness app (new beta).  I use the Wahoo app because it’s the most complete for post-activity data analysis.  By far.
5) Middle Right: 1 Euro.  Bathrooms aren’t free in France (or much of Europe).  A Euro ensures I’m good to go.  Literally.
6) Middle Far Right: Our house keys. Yes, that’s a little Eiffel Tower. My keyset has it on it. It ensures that when there is a ‘who’s key’s are lost’ fiasco – I can clearly state mine aren’t.
7) Left: Camera.  It’s what I use to take pictures on the run.  It’s waterproof and all that jazz.
8) Lower Middle: PowerBar Energy Blasts.  Nutrition.  It’s what I’ve been using lately.  They seem to work.  Mostly, they just taste awesome.
9) Bottom: Spibelt.  It holds all that junk.

As noted above, the Alpha HR watch feeds the data to the Wahoo app.  It does it via Bluetooth Smart, so no dongle needed.  I also have a ANT+ variant as well, that can feed data to Garmin devices etc.  Since the Alpha doesn’t record the data, so it has to go somewhere. 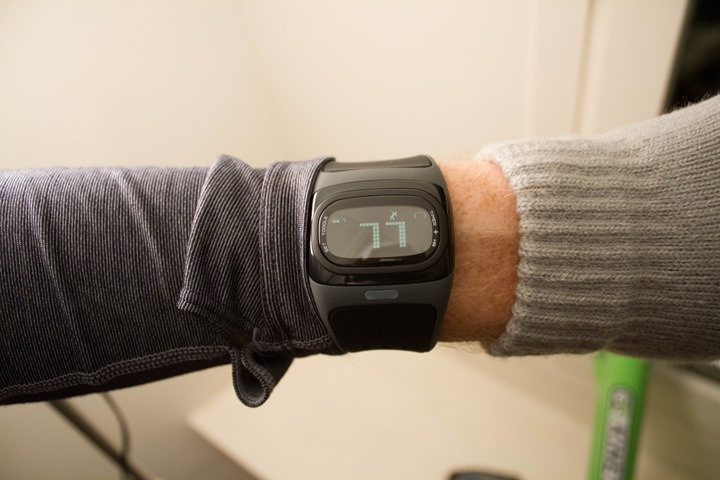 Note the armband goes on my right arm (photo below to show you the HR values being transferred).  Once I start running, I don’t bother to touch/deal with it.  It’s just gathering data.  You’ll generally find that I don’t like to mess with stuff once I start a workout (see my note yesterday about watching Mythbusters on the trainer).  I just want to workout.  I know, sounds odd coming from me – but that’s how I am. 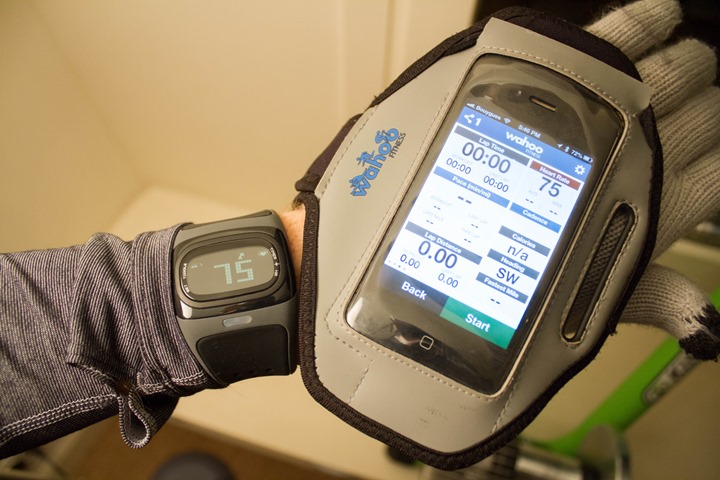 Ok, with that background taken care of – I feel it’s important to post a pre-run photo of The Girl.  Here’s her new addition – a blinky light.  Well, actually, it didn’t really blink. So really, I suppose she just looks like a confused Rudolph the red-nosed reindeer.  But, since she avoided any person-vehicle incidents tonight, it must be working. 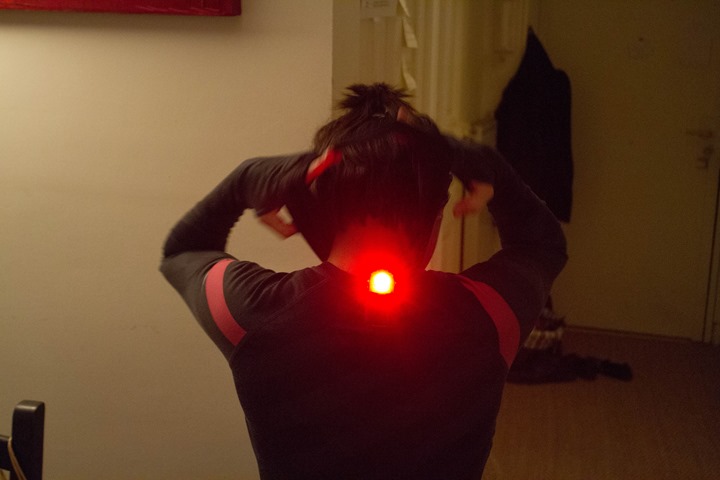 It was about 6PM when we headed out, so not too early in the evening, but not too late.  About perfect for long-run time.

Of course, the first thing that’s always on the agenda is getting GPS signal.  No matter which device I have, it’s all about waiting outside near stall #5.  These are the green boxes along the river that books/postcards/photos are sold in.  I’ve gotta write up a Paris blog post about them sometime. 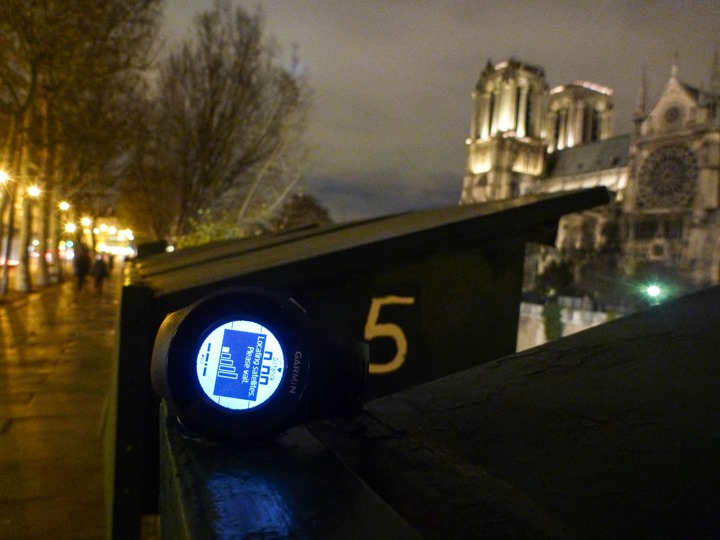 With signal taken care of, off I went.  I started off going south-east along the river (away from the tourist areas), mostly to build up some early mileage and get into a rhythm before having to dodge pedestrians and traffic.  But, I don’t like to go too far this way at night as eventually you hit some industrial area that isn’t quite as nice.  I should point out that The Girl had already left off on our own route, at her own pace.

As I looped back up I crossed the river and found rush-hour traffic still going strong.  Below next to the cars is actually where we often do intervals  Despite how it looks, it’s awesome ground with virtually no pedestrians (because of the cars).  There’s a brand new path just finished a month or two ago, in between the cars and the water. 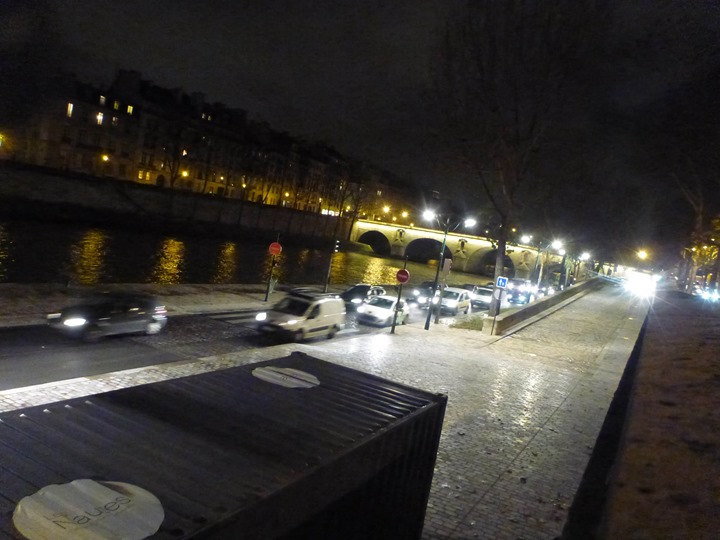 After passing the Louvre (though, this time I skipped going into the inner area with the little glass pyramid), I eventually came upon the Ferris wheel that we rode two weekends ago.  Since then they’ve add a ginormous Christmas tree.  The scale is hard to understand in this photo, but it’s basically as tall as the wheel.  It’s kinda nuts. 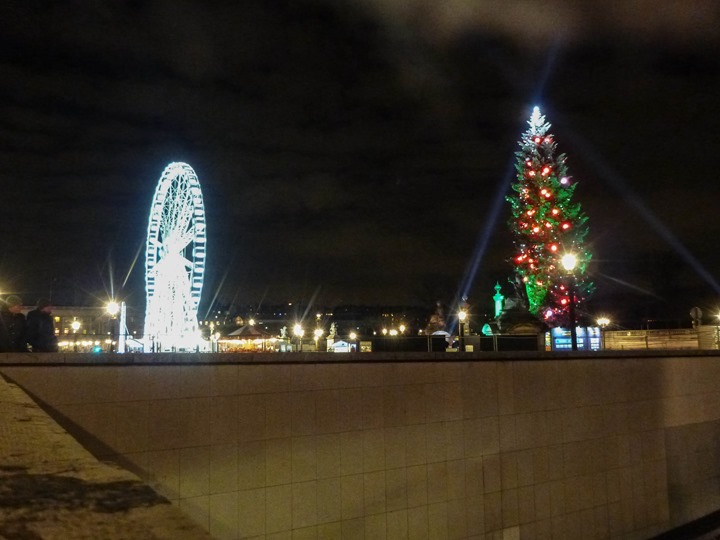 From there I turned and ran up the Avenue des Champs-Elysees (that’s where the TdF finish is).  They’ve got this unreal Christmas village thing going on for a good ways, before turning into a gigantic light illumination scene.

Of course, taking a photo of this while running at night doesn’t really work as it turns out: 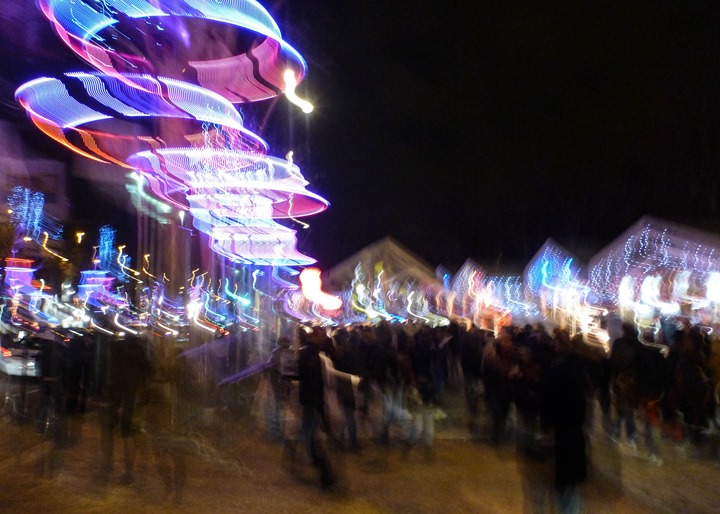 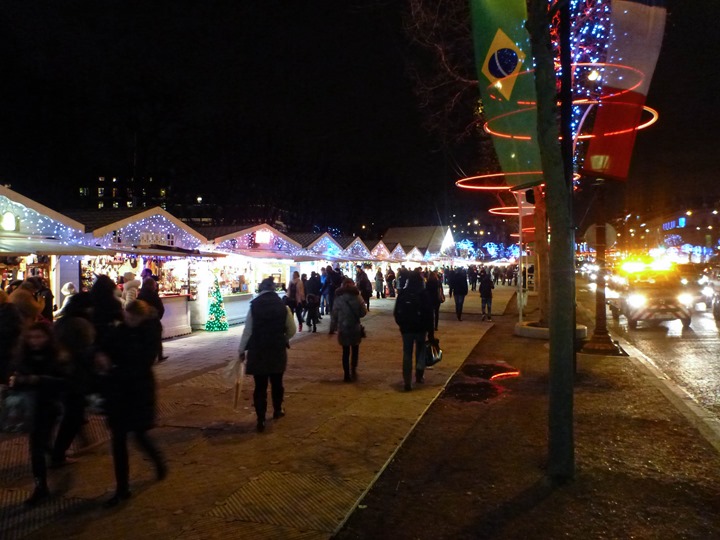 At the top is the Arch.  In theory, I could try and cross the road and run back down the other side. 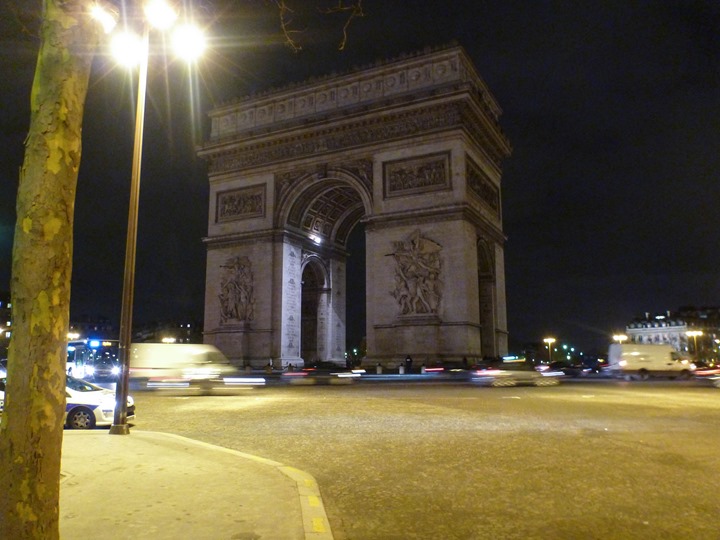 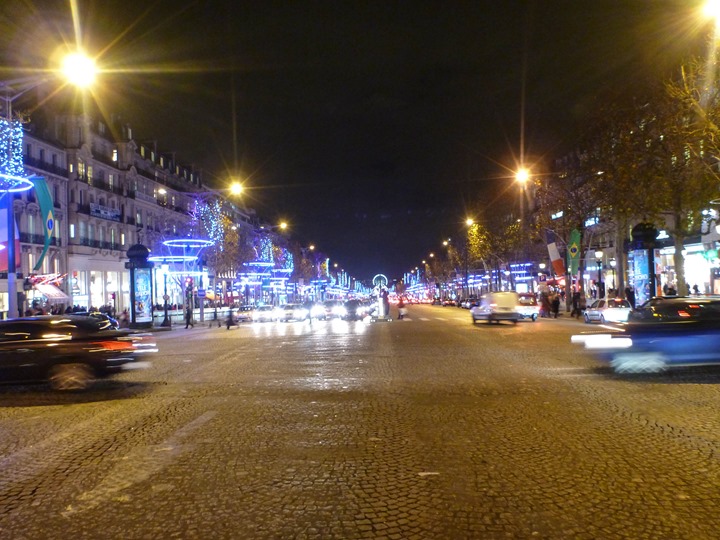 In reality, I actually found it easier to run all the way around it – crossing probably 8 more streets.  But each street is relatively small, so it’s pretty easy to cross while running.  And if traffic is a problemo, then I just do lots of little loops: 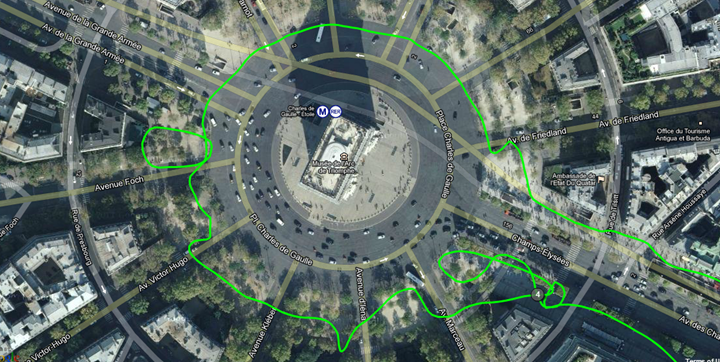 From there, I headed back down the craziness of Christmas village.  One could very easily get distracted here – potentially so much so that finishing the run would seem silly. 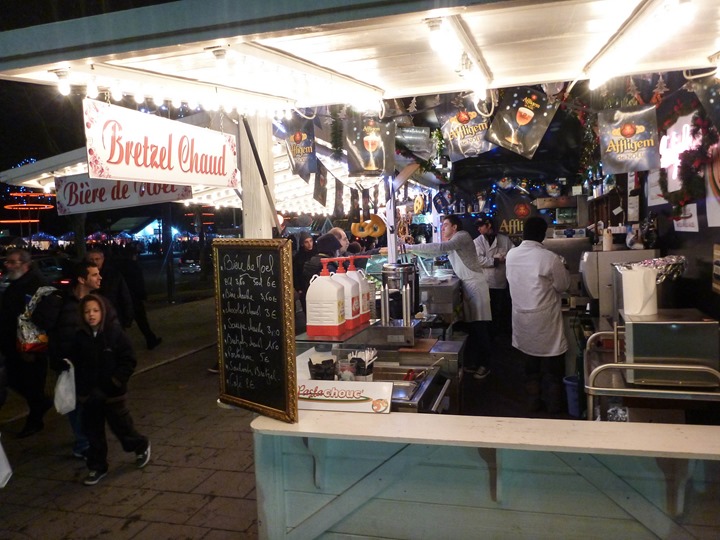 With the Avenue complete, I made the turn towards a tall golden doohickey: 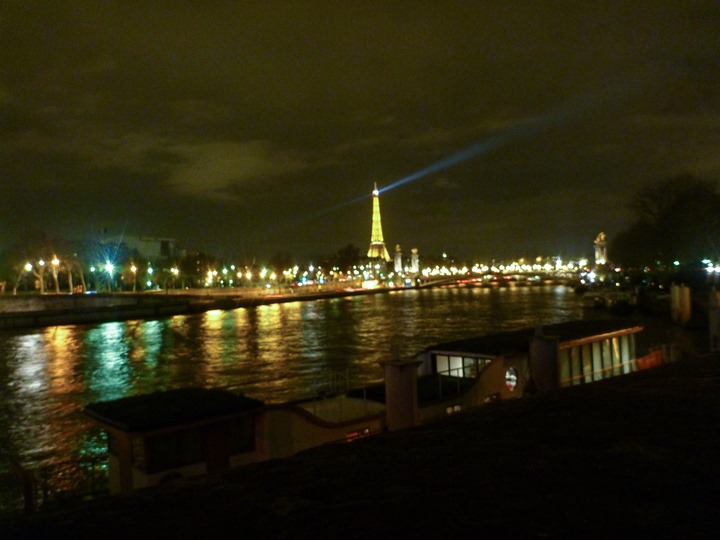 Below, passing the Bateau Mouches – which is the big company that runs tour boats up and down the river.  It’s really fascinating.  We see this boats every day all day from our window.  And night.  In fact, one just lit up our living room a few moments ago (they have big spotlights on both sides of them to illuminate the buildings). 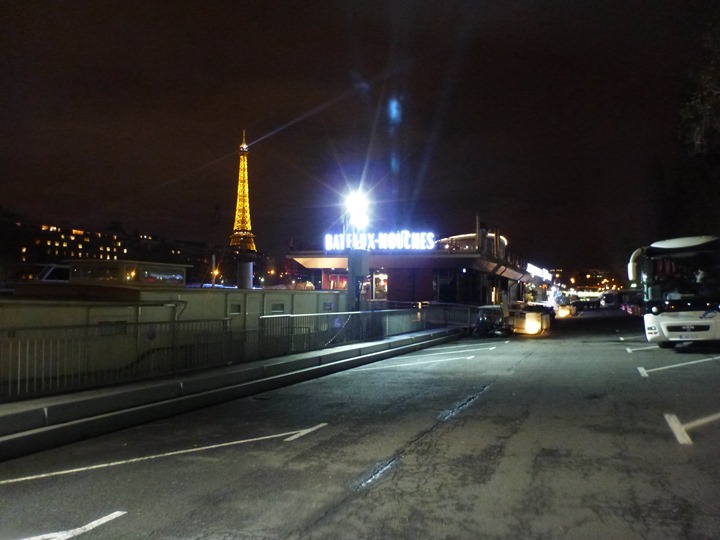 Just after passing the boats, the clock struck 7PM.  In doing so, the Eiffel tower turned into a giant sparkler.  See on the hour every hour (at night) the whole thing blinks and shimmers for a couple minutes.  Then it goes back to being normal again.  Like a little dance.  Minus the movement part. 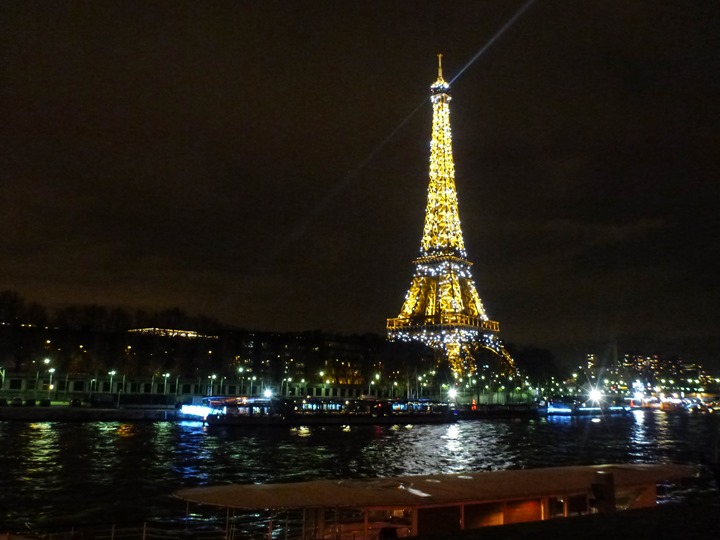 And while the tower was doing its dance, so was my stomach.  Not having planned for a long run meant that food during the day wasn’t quite timed correctly.  A bathroom was urgently needed.  Like, no can run until bathroom found type urgent.

Now in DC, I can tell you every portapotty within a 20 mile radius of the house.  Every.last.one.of.them.

But in Paris, I’m still finding my spots.

Tonight, I found a new spot – right below the base of one of the legs of the tower.  And this one is brilliant.  It’s an underground bathroom that’s FREE!  That’s crazy here in Paris.  Plus, it’s staffed and bright and shiny and clean and everything else that most bathrooms here aren’t.  It’s awesome.  I might just walk over there every time I have to go…just because I can. 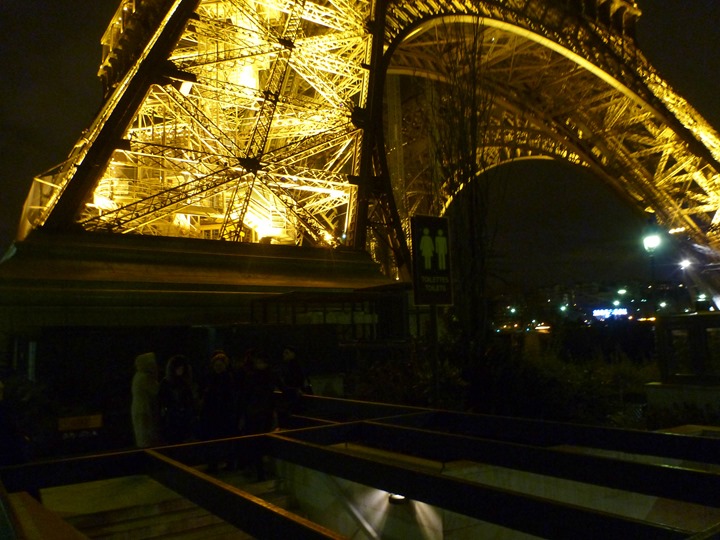 With my bathroom venture complete, I made a loop around the grounds of the tower, tacking on an easy car-free mile.  From there, I headed back towards home along the banks.  It’s around here that I ran into The Girl.  Or perhaps she ran into me.  Either way, we crossed paths. 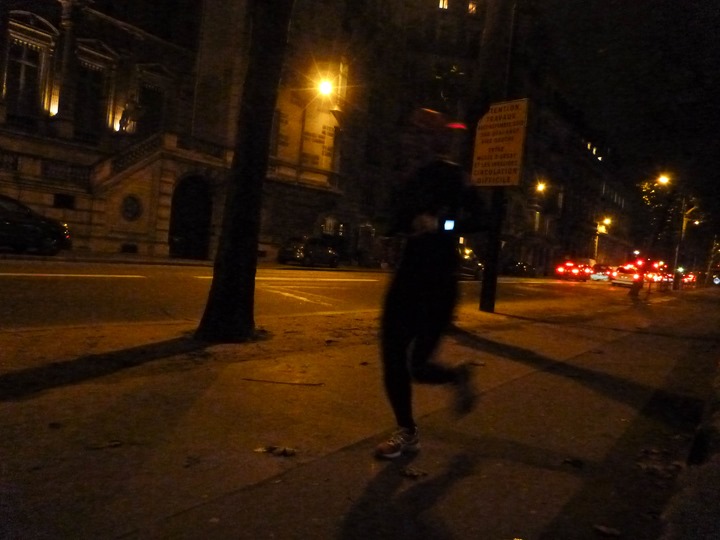 A couple miles later the towers of Notre Dame were within view.  Along with the crazy blue structure they’ve been building for three months in front of it all.  That thing opens up on Friday.  We’ll talk about that next week.  I think it might sparkle too. 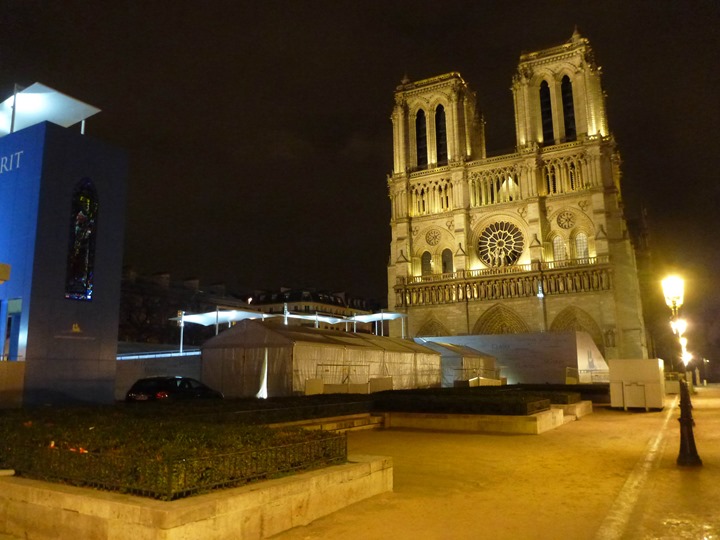 With Notre Dame in view and then soon behind me, my run was complete.  Before I get into my next photo though, I want to point out that dryfit shirt below.  I actually have no idea who sent it to me.  It showed up in our US forwarding address a month or two ago, with no return address or other information.  Just a shirt in an envelope.  Someone within the sport tech industry I’d suppose (since that’s who has that address).  Tonight was the first run with it – worked well.  So whomever you are, thanks!

And since I know you’re all dying to see my awesome Neapolitan ice cream hat,the real purpose of the below photo.  My sister in law got it for me, and it’s pretty rockin’.  It’s even got ear flaps.  Big ones. 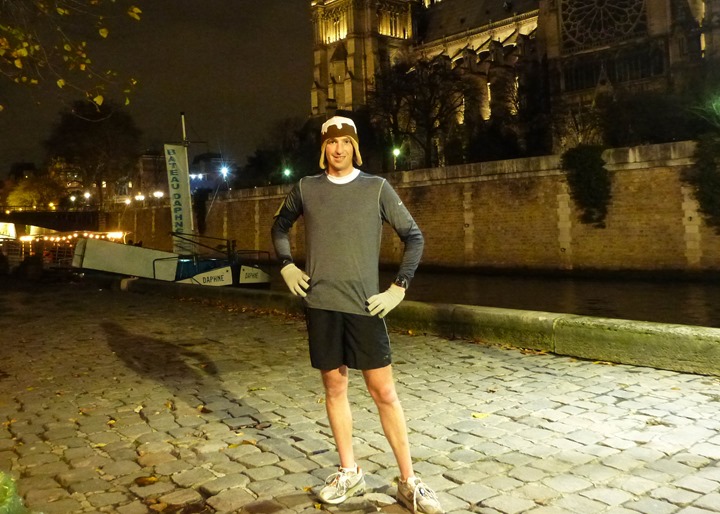 Here, let me give you a better view: 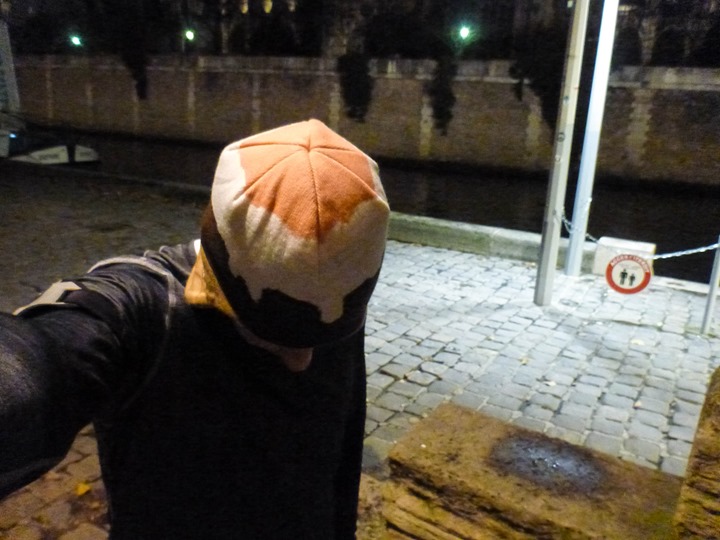 And just like that, my post is complete.  I really can’t top a topping of ice cream, can I?