Back a few months ago when we first realized we’d be going to Singapore (actually, for all the cities we’d be visiting), I looked up the race calendar for this past weekend.  Turns out, there were a number of races being run.  An off-road 10K, an on-road 10K, a fun 5K run, and another on-road 9K at night.  Of course, like so many other things, we got busy and somehow along the way kept procrastinating on the registration piece.  So when it came to registering last weekend, these events had already sold out.  Eek!

No worries though, I put out a tweet or two and some Singapore folks managed to secure a bib for the Brooks 9K race.  To that, I want to say a HUGE thank you to Singapore local Selly who helped us out.  Woot!  This would be the night-race, at 7:30PM on Saturday, just after sunset, and would probably be the most scenic of the bunch, touring all the major areas along the Marina Bay.

With that, here’s a quick look at the packet: 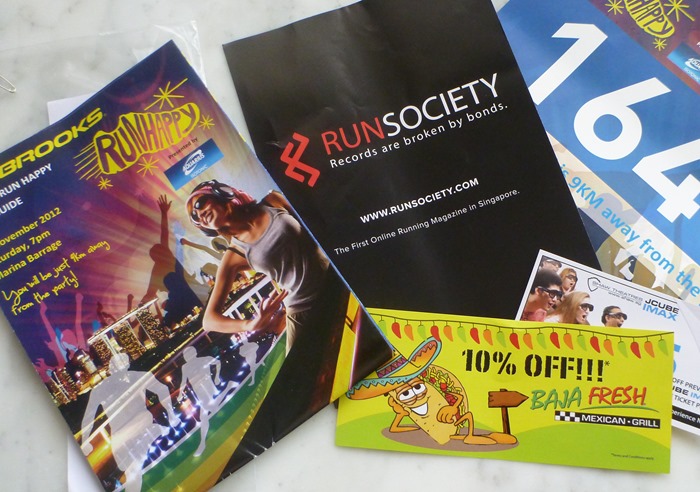 There’s pretty much the usual in there – a program guide of sorts, a few coupons, and the race bib itself.  However, the Baja Fresh coupon caught my eye.  They have Baja Fresh in Singapore?

Now, I’m more of a Chipotle guy (in life, you fall into one of two camps for a number of things: Pepsi or Coke, 7-Up or Sprite, Hot Dogs or Hamburgers, etc…, and Chipotle or Baja Fresh is just one of them).  At any rate,  I happened to turn over the coupon to look at the conditions.  Because while I always appreciate a 10% discount on anything, 10% isn’t really a lot for a Burrito coupon (many food places in the US do a buy one get one free in race packets for food items like Burritos). 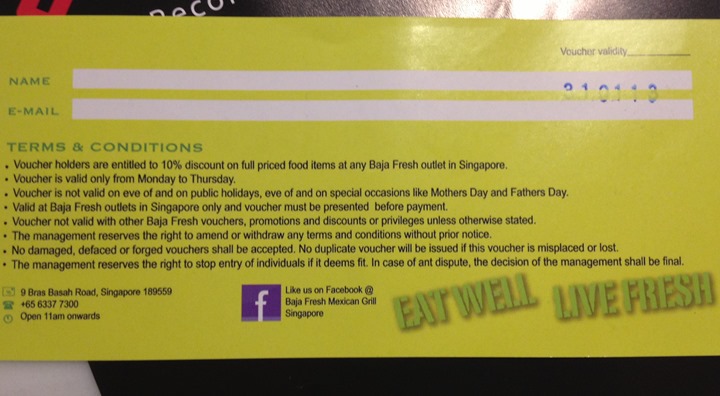 In particular,  I thought it was line three that was funny:

So, sorry Dad, I can’t take you out for that 10% burrito on Father’s Day.  Or twas the night before Mothers Day.  Especially if it twas a Saturday.

Ok, minor coupon sidetrack complete – we grabbed cab for the 15 minute ride from our hotel down to the Marina Bay.  Upon arrival we wandered through the areas where people were hanging out, and checked out the scene. 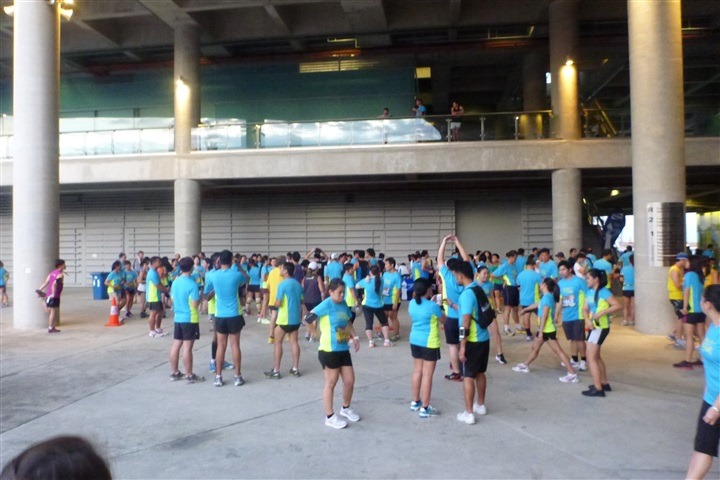 The whole race would be held along the Marina Bay waterfront, which is a massive parks and commercial/retail area.  Everything from huge (really HUGE) indoor and outdoor gardens to malls to performance areas to science museums.  It’s an amazing area, really new, and really pretty. 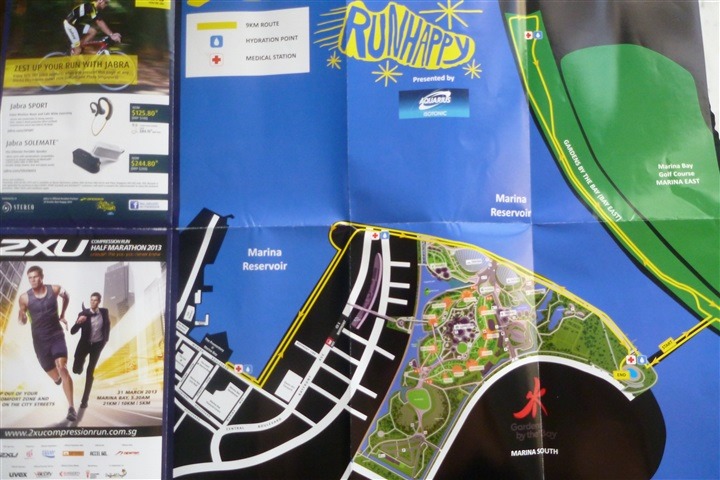 The start and end would mostly be in the same place, at a structure called the Barrage.  It was this big swirling grass and concrete building that rose several stories up overlooking everything.  On top was the finish, where they set up tons of tents, music, and food.  You can see the skyline behind it all. 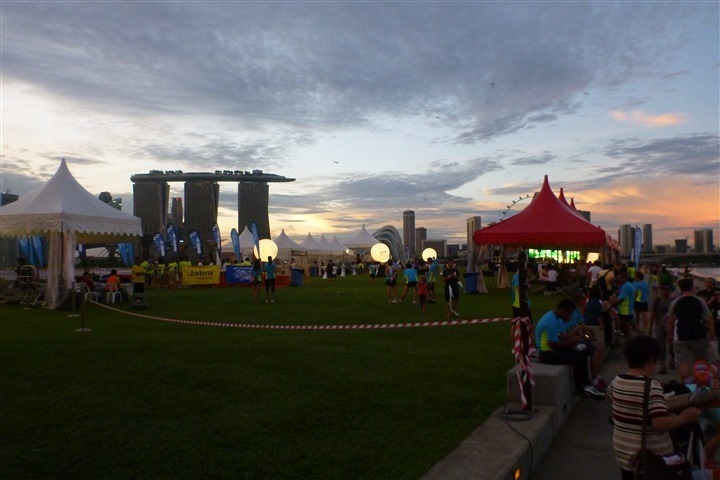 Meanwhile, the start would actually be positioned on a bridge.  The far end of the bridge was the starting line.  You’d start from that side and go onto that green space over there – doing a large loop, before crossing back over and running elsewhere along the waterfront.  Thus, the race was effectively a two-portion out and back. 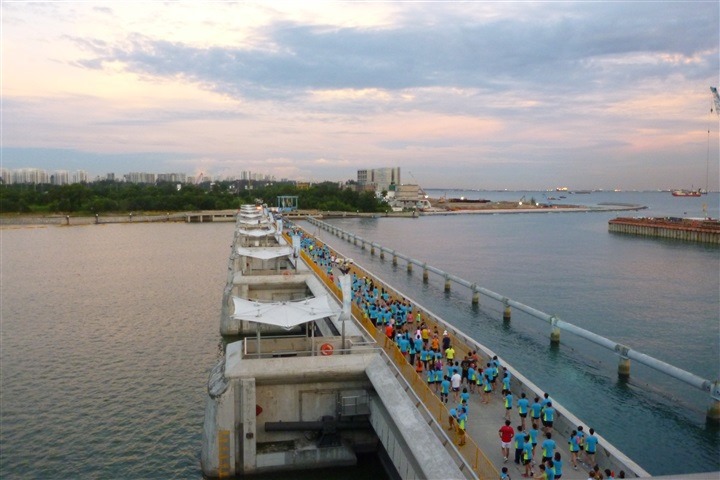 We started to work our way out onto the starting platform.

Obviously we missed the memo about wearing the t-shirt from the race packet.  But, of course, doing so would violate the endurance sports rules about wearing one’s finisher shirt before you finished the race.  And I didn’t want any bad luck – like a tiger or something coming out and nabbing me mid-race.  Given this was a night race, I would think that’d be even more reason to not tempt the gods of endurance sport. 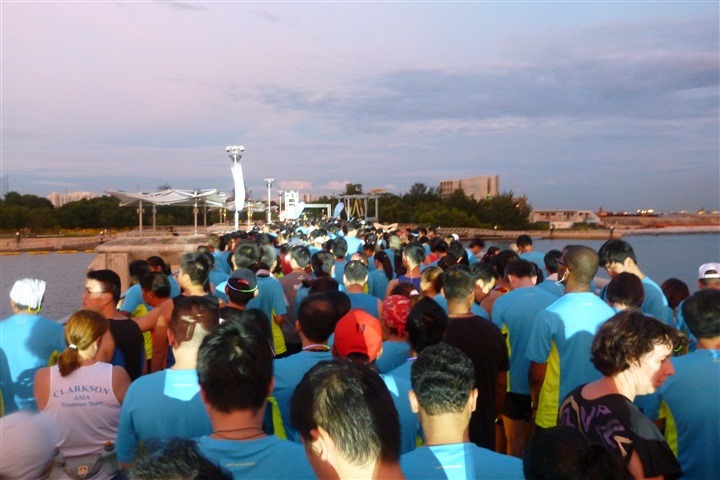 Off to the side of us, the sunset was pretty spectacular over the skyline.

Speaking of which – see those three towers to the left with the platform all the way across them?  That’s actually a swimming pool.  A single pool that stretches hundreds of meters.  Someday I’ll make it up there. 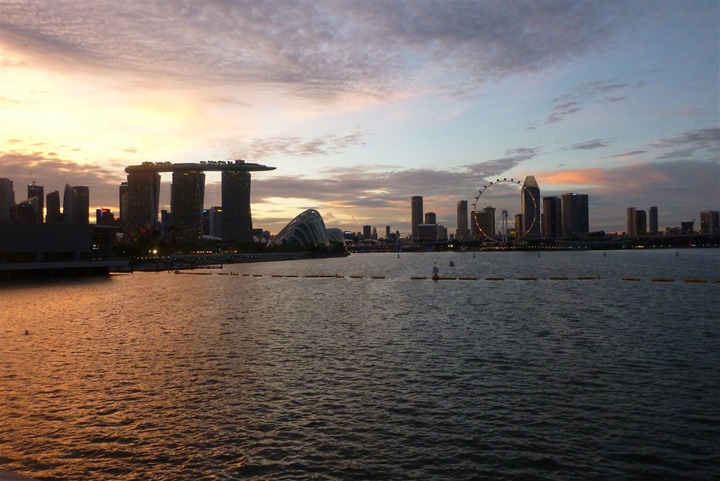 Lots of people checking out the view: 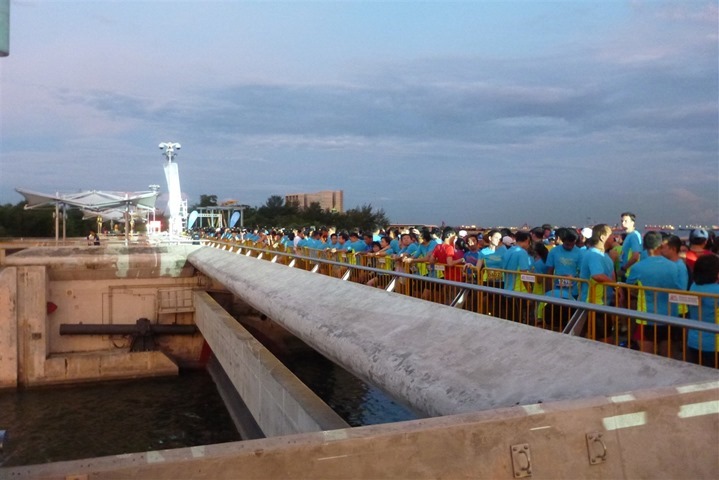 Soon, it was time to get warmed up.  And to do that, they had warm-up dancers.  It’s hard to tell in this photo, but our nearest warm-up dancer is the one whose arms are in the air. 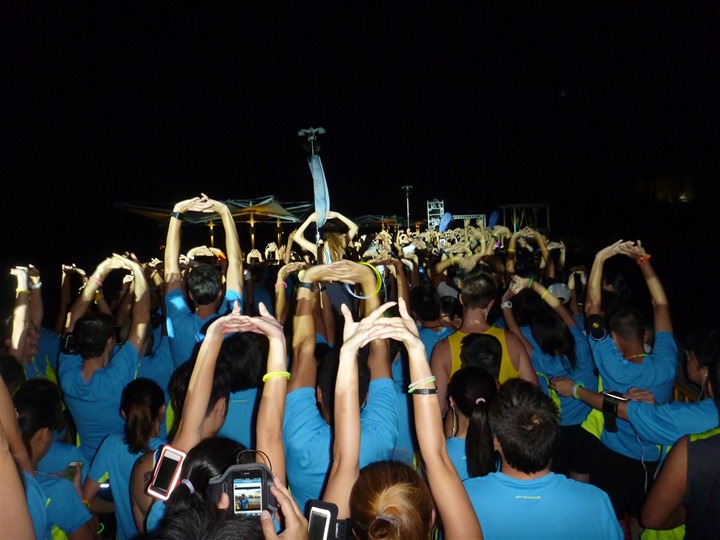 Perhaps the most interesting sports technology takeaway from the race was just how many folks ran with their phones and used their phones to track their race progress.  Take a moment to look at the above photo carefully.

How many GPS watches do you see?  That’s right, none.

How many phone apps do you see? Yup, a ton.

RunKeeper was by far the most popular app from what I could tell.  And I only saw a handful of GPS watches in the entire race.

Before we knew it, the dancing was over (including a brief Gangnam Style appearance that I took a video of), and the running was to begin.  There was a quick countdown, a buzzer, and we were off.

This seemed like a good time to turn the camera around facing backwards and take a quick shot.  Of course in doing so, those folks have pretty much no warning of the impending photo shoot.  Thus, some of the confusing looks. 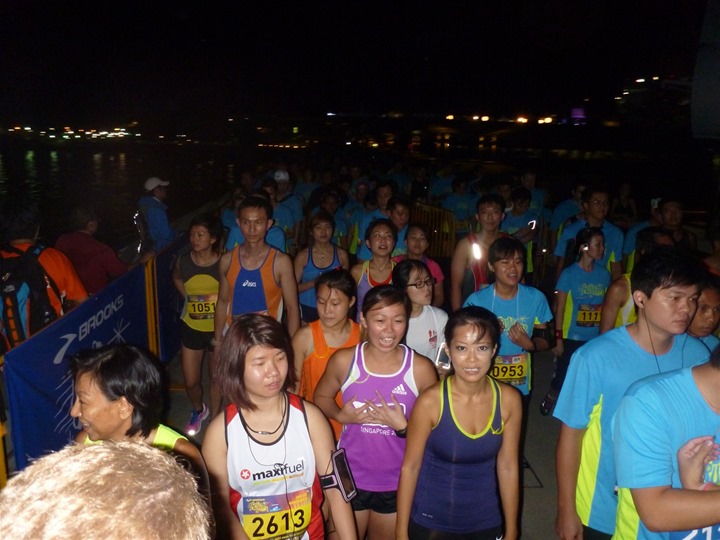 About 2 minutes later we made it to the starting line area itself, which meant we were almost across the bridge. 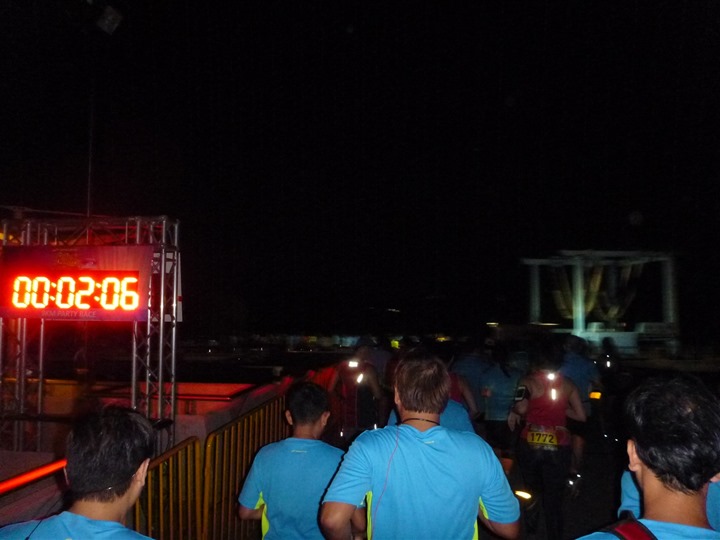 I should probably apologize at this point for just how horribly bad looking most of these photos are (quality and composition wise).  I was using my little point and shoot camera, which while good during the day is only barely passable at night.  And that barely passable turns to downright sketchville when you add running at night while taking the photo into the equation. 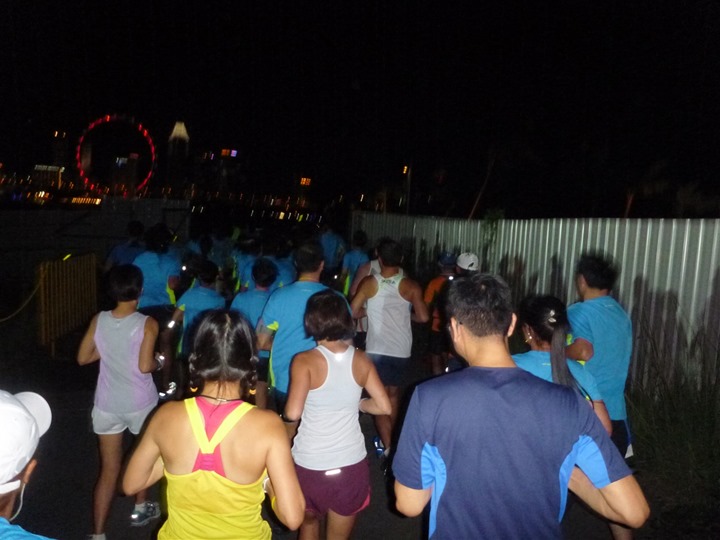 That said, there were a few photos that were salvageable, which is what you see here.  The below is somewhat interesting.  It’s the 2KM distance marker, all lit up from the flash.  But also – and more interestingly – it’s all of the wristbands people are wearing lit up.  Each one of those little slashes on the picture is the glowing bands they gave each person. 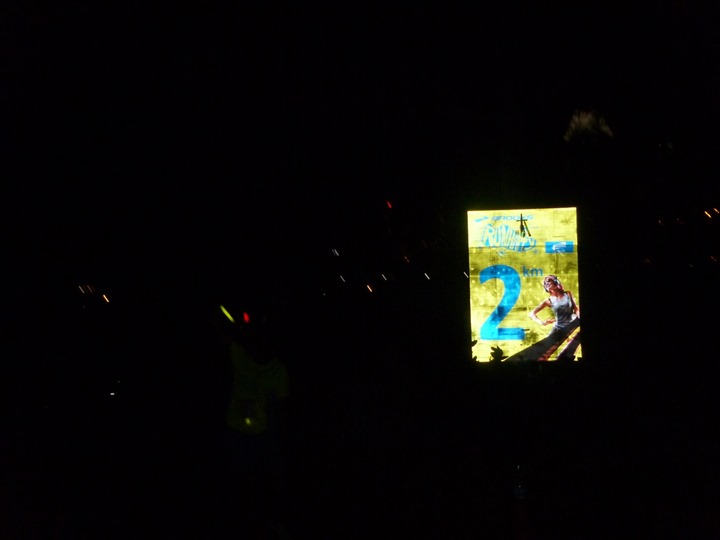 Next up, water stops.  They had them too.  Perhaps every 1.5-2KM, though I wasn’t keeping track.  They served both water, as well as something (Aquarius) that looked like water, but was definitely not water.  Tricky peoples.  Had to be careful. 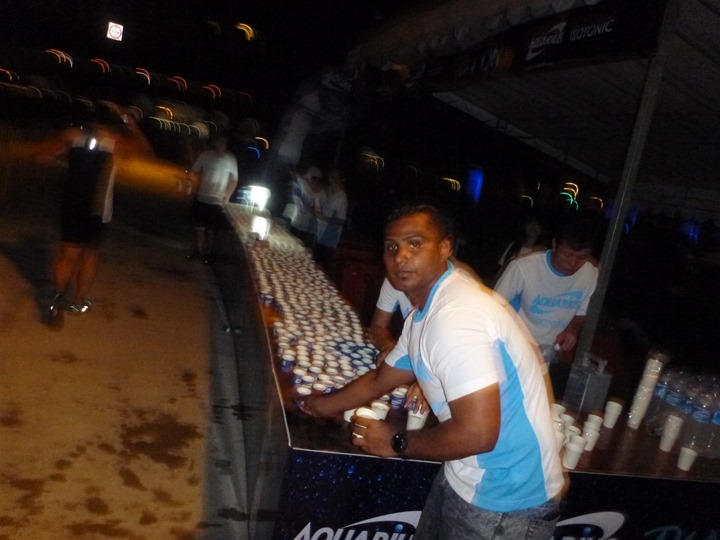 We didn’t really have a race plan going into this.  We’d run together, and that was about it.  More for fun than anything else.  We did want to push it a little bit, but didn’t decide ahead of time how much.  And given the high heat and humidity, there’s only so much pushing we’d really be able to do coming from such different climates.

The first mile or so, the fastest we could move in the swarms of people was about a 10:00/mile.  After that, we got up to the 7’s with lots of swerving around folks.

After cutting back across the bridge, we were now in front of many of the major buildings – malls, performance halls, giant indoor botanical gardens, museums, etc…

Below, is actually a mall.  We’d go visit it on Sunday while trying to find the ArtScience Museum.  They have a restaurant dedicated entirely to Buffalo Mozzarella.  It’s brilliant.  Additionally, an ice-skating rink without any ice.  People had skates on, and it looked like ice, but it wasn’t.  Odd. 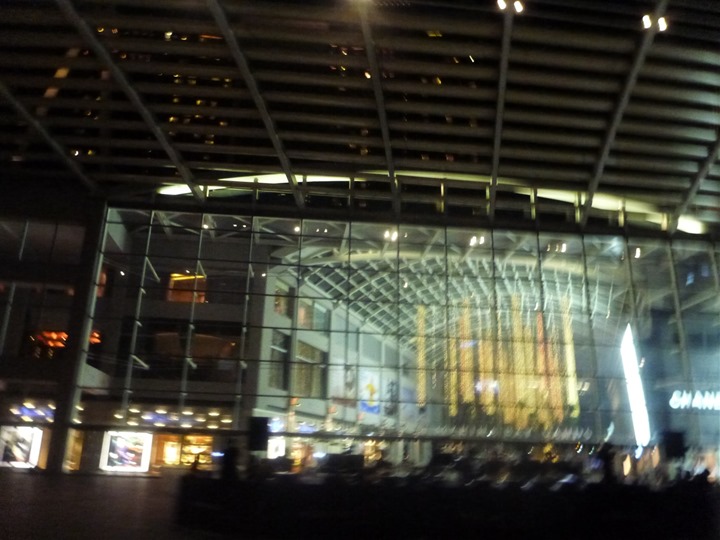 By this point in the race, we had pretty much opened things up and there were handfuls of folks around.  As we turned around at the turnaround, the crowds changed such that it was mostly just us on our side, and everyone else on the other side. 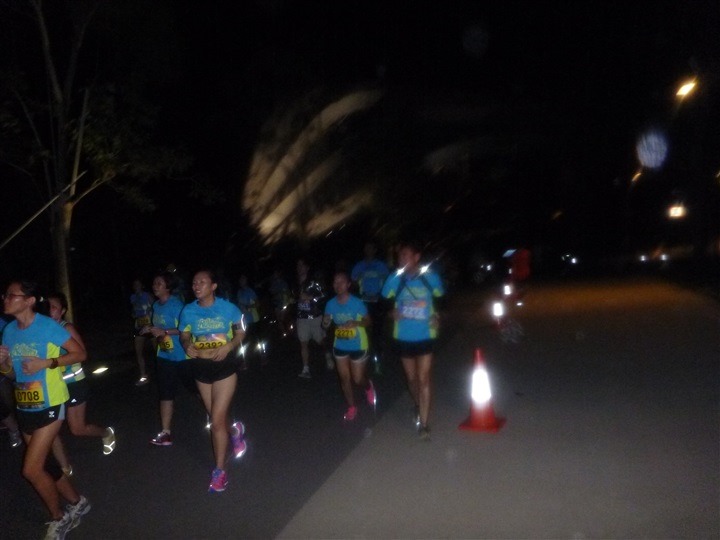 As we headed back, we ended up passing through the middle of a light, water, and laser show going on – which you can sorta see to the left to this photo below. 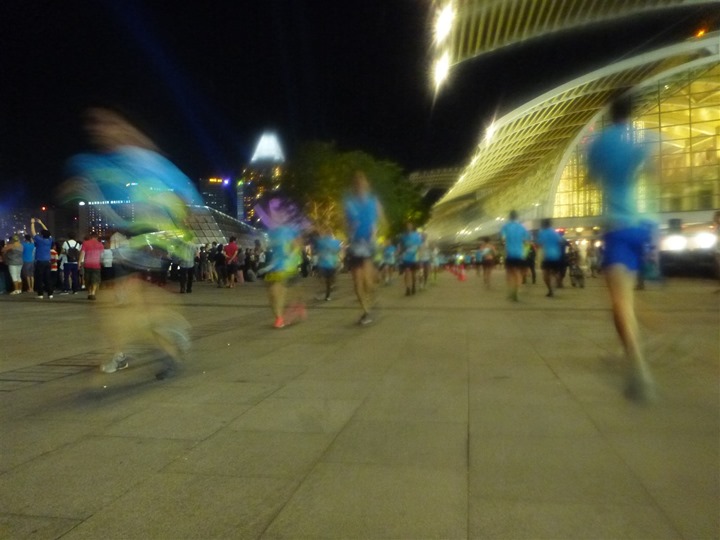 Finally, we approached the finish.  It was uphill climbing three floors to the top of the grass and concrete structure.  You were running on a swooping grass incline up to the top. 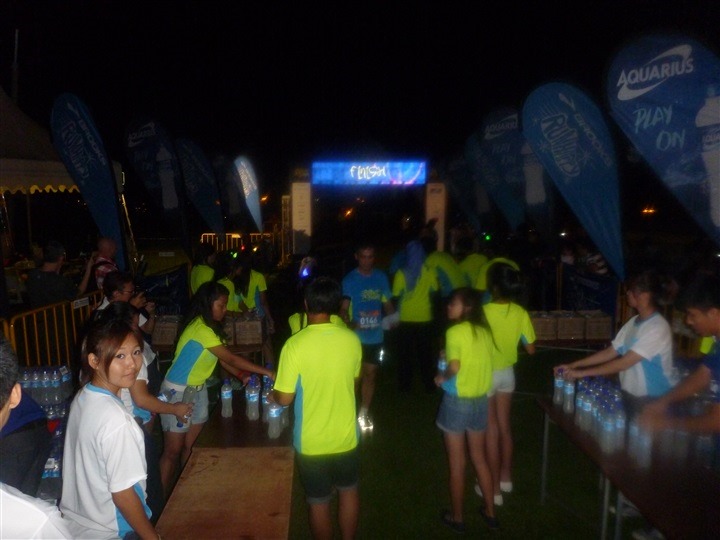 Below, you can see our route as recorded by the GPS.  We started with the green dot and went north, and then backtracked past the red dot into the Marina Bay area before heading back to the finish. 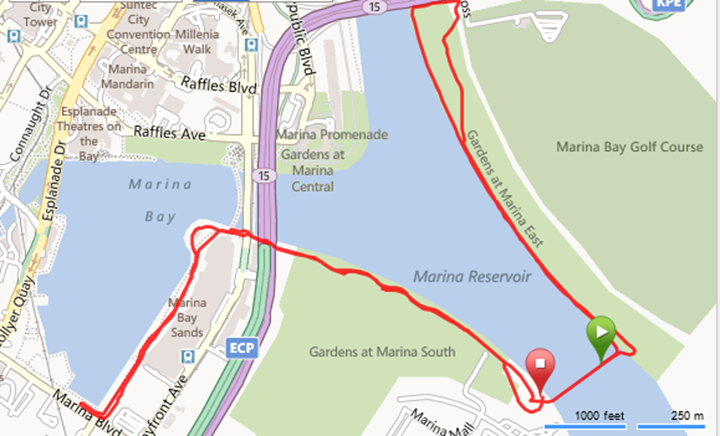 Here’s the same route from the TwoNav Ultra GPS I’ve been testing.  It’s a bit hard to see in the dark in this photo, and my little camera makes it that much worse – but it’s the thought that counts… 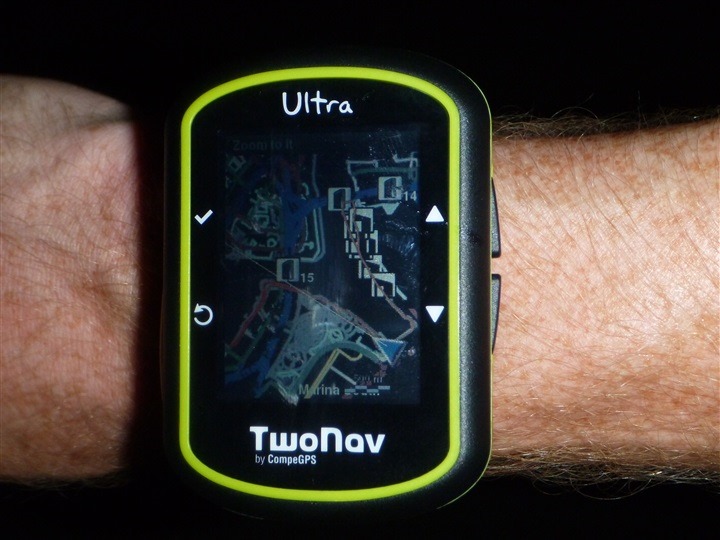 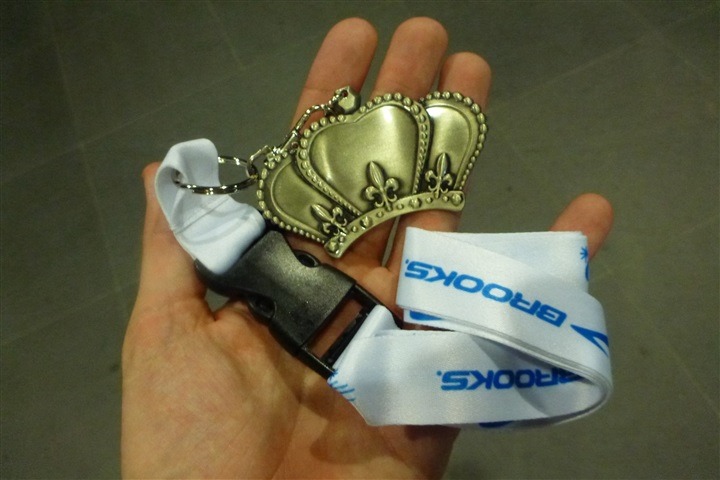 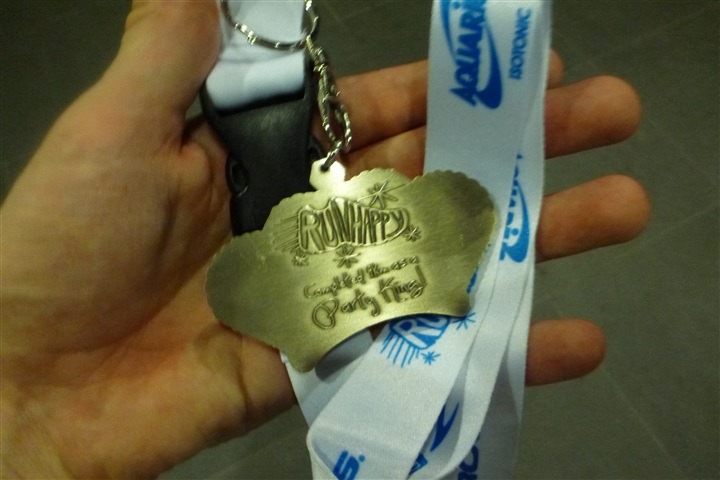 And of course, the party went on into the night – pumping music, some dancing, and a great view of the skyline.  You can see the Singapore Flyer (gigantic Ferris wheel) hanging out in the background. 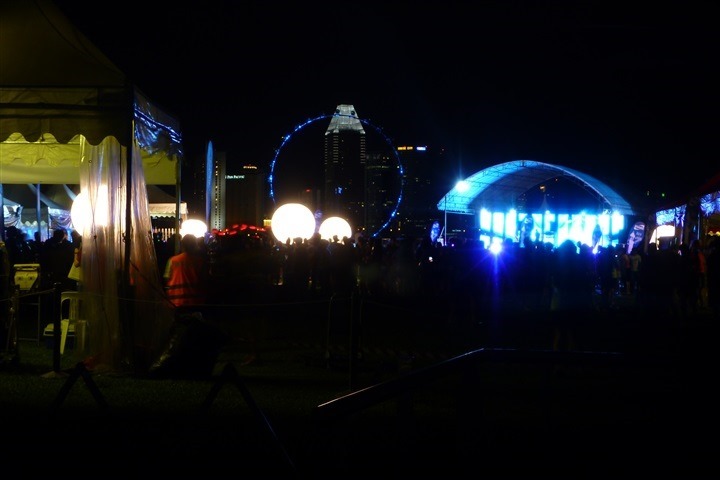 With that, we finished up at the race site and headed back to catch a movie – Bond, James Bond.  A perfect way to end the day.

Again, a huge thanks to those that helped search out bibs, and thanks to everyone else for reading!