After a 6 hour flight from Beijing, China our Boeing 777 landed in Singapore, Singapore (the city with the same name as the country, sorta like New York, New York).  By time we cleared immigration, customs and everything else it was close to 11PM.

Thankfully though, the trip from the airport to the hotel downtown was a short 15 minute jaunt.  Our itinerary was only a stopover for the night here, once again taking advantage of the free stopovers allowed on international itineraries if less than 24 hours.

We arrived at the rather posh Fairmont Singapore (which I got a ridiculous steal of a deal on back this fall). 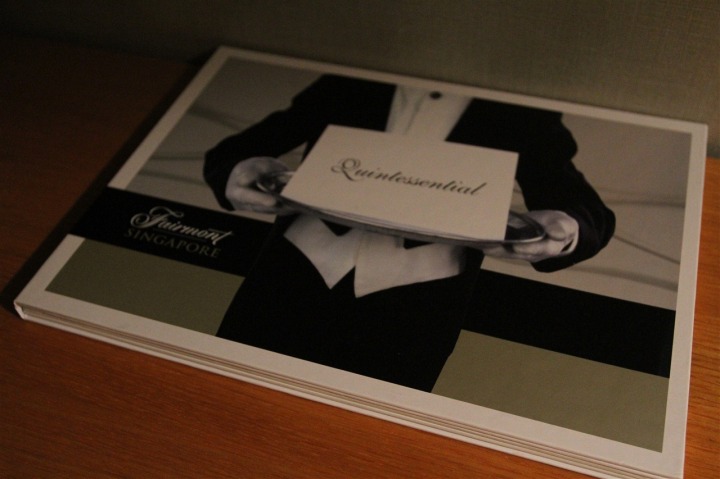 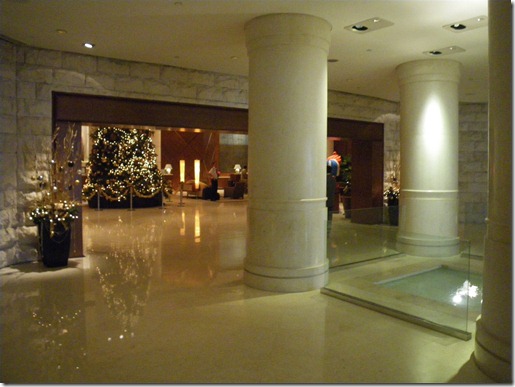 Our 25th floor room had a pretty amazing view of the surrounding city: 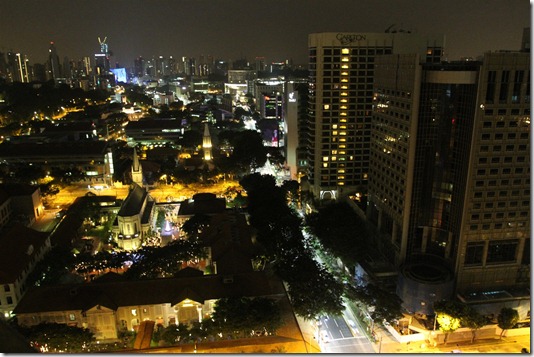 But instead of enjoying the view then, we quickly exited back out of the hotel and headed down to one of the last remaining open food markets at this time of the night to grab some post-dinner-time dinner.

After a very brief cab ride we arrived at a place with a whole array of satay stands outside, along with an adjoining section of food stalls inside.  We choose to stay outside with the BBQ’d satay stands. 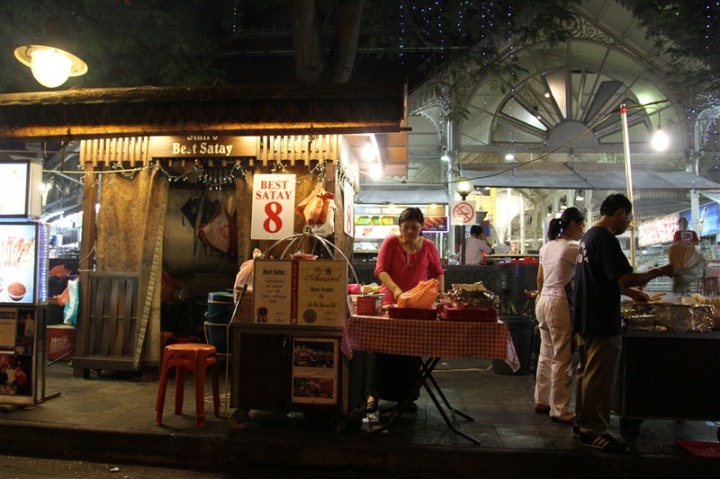 The place was abuzz with night life, and we simply selected the one that both looked the best, but also had the most people.  Locals are usually never wrong. 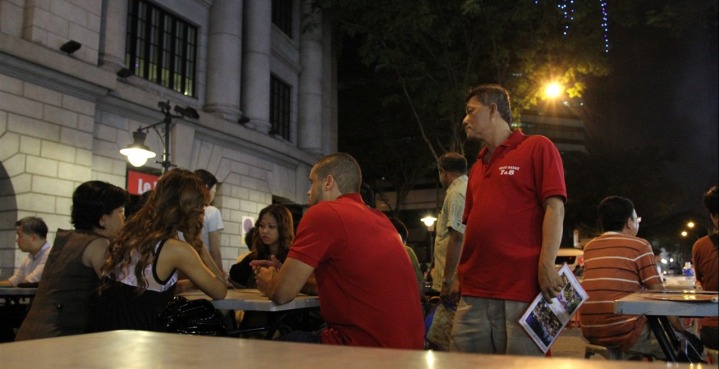 After a quick consultation of the menu we got our order underway and the cook got to work. 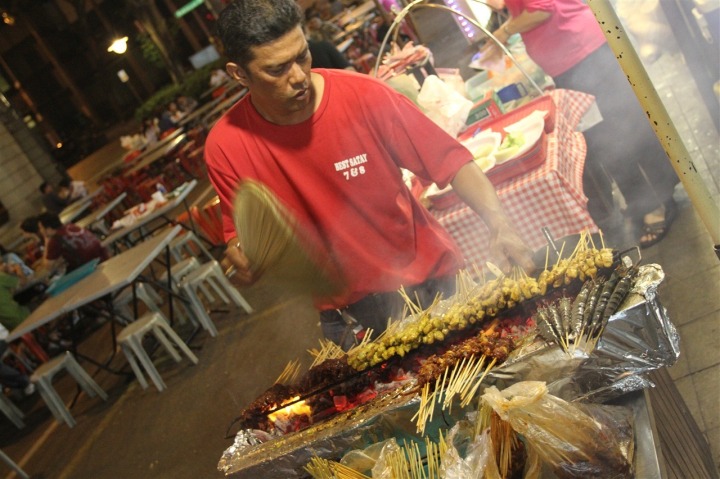 Soon our satays came – a set of chicken, and a set of beef – along with peanut sauce.  Looked pretty darn good. 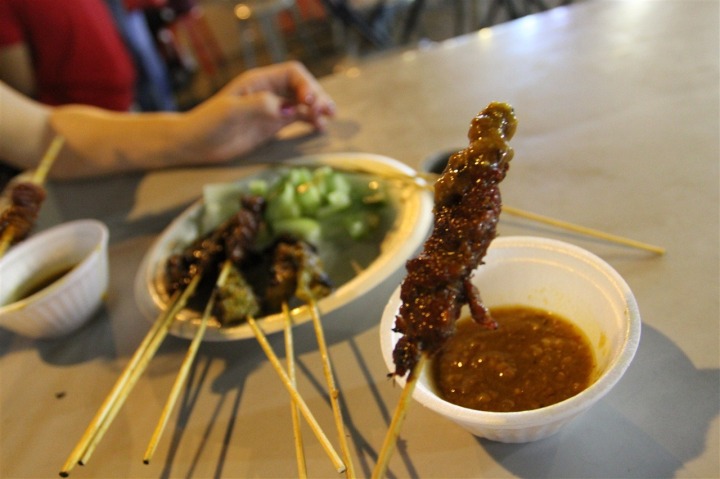 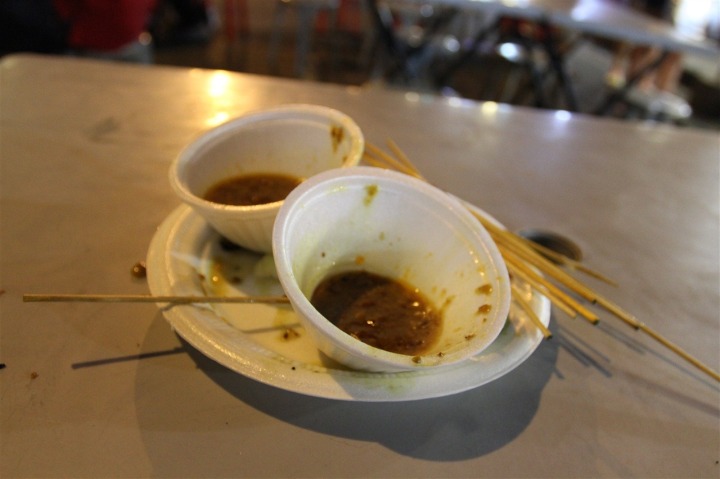 After finishing up our food we decided to just walk the 2 kilometers or so back to the hotel, along the harbor. 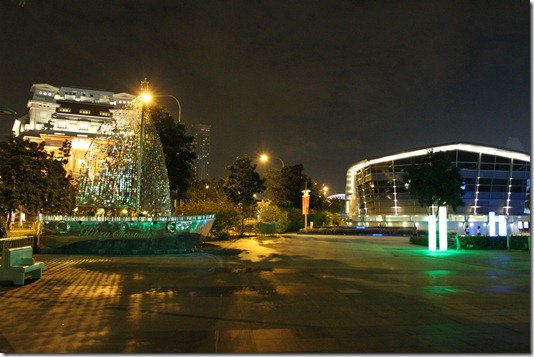 The harbor was strangely full of a gazillion floating white balls.  Something to do with this years New Years Eve celebration.  Every dot you see below is a floating ball. 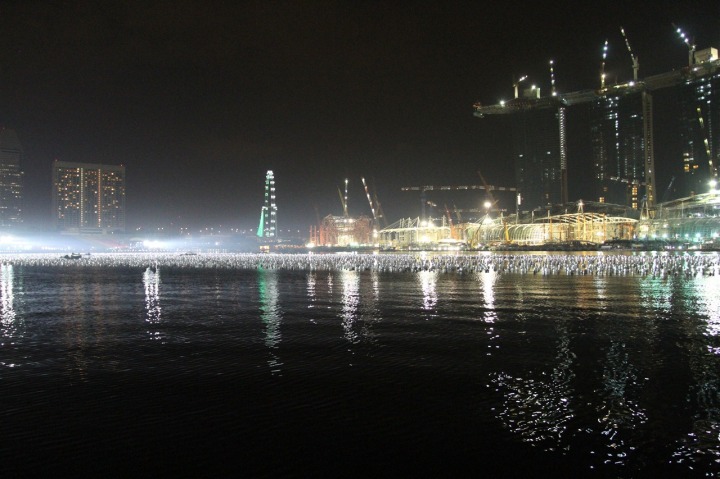 You can still see the balls behind the dragons below. 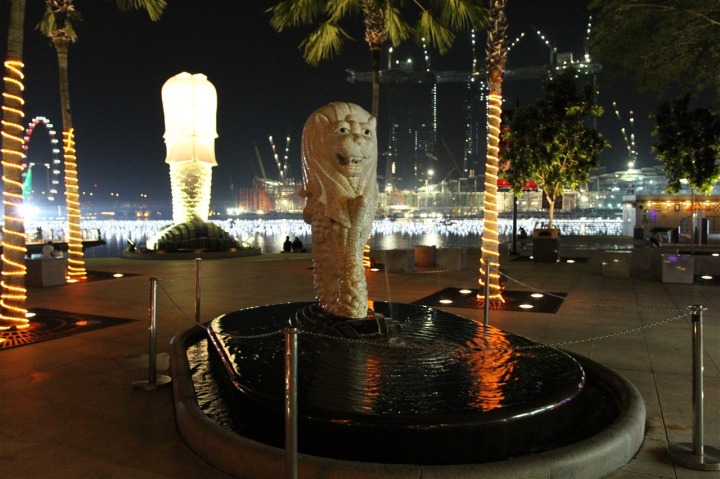 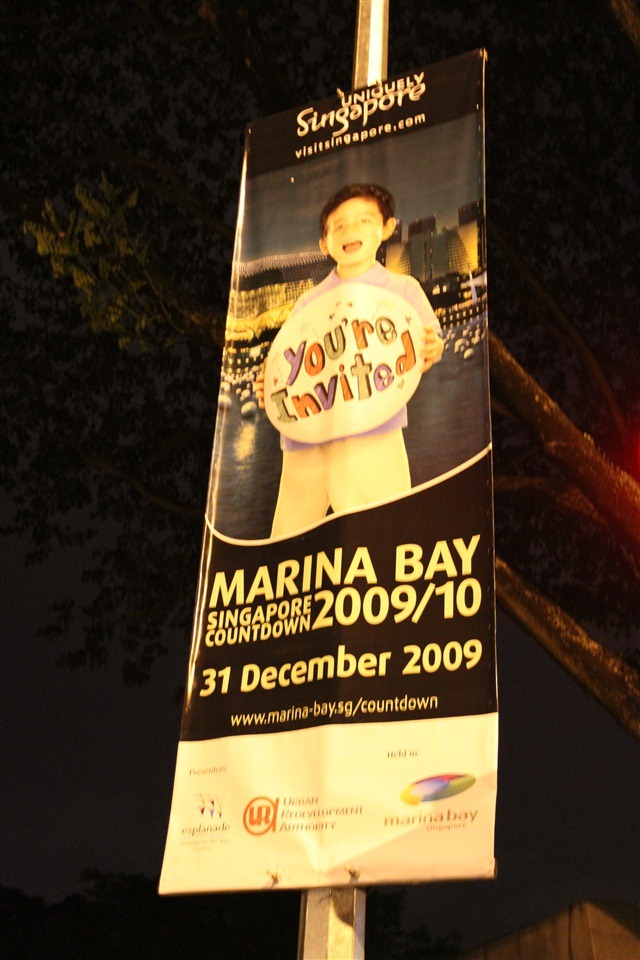 After getting back to the hotel around 1-2AM, we were pretty exhausted.  Time to sleep.

The next morning didn’t give us really any time to check out the city in daylight as our flight was at 9:25AM.  Yikes!

I did take one quick shot from the balcony though using a tilt-shift lens I rented for the trip.  Been playing around with it a bit here and there.  Produces a bit of a miniature effect.  One of the cool part about renting lenses is affords you the ability to play with lenses you’d otherwise not buy due to price. 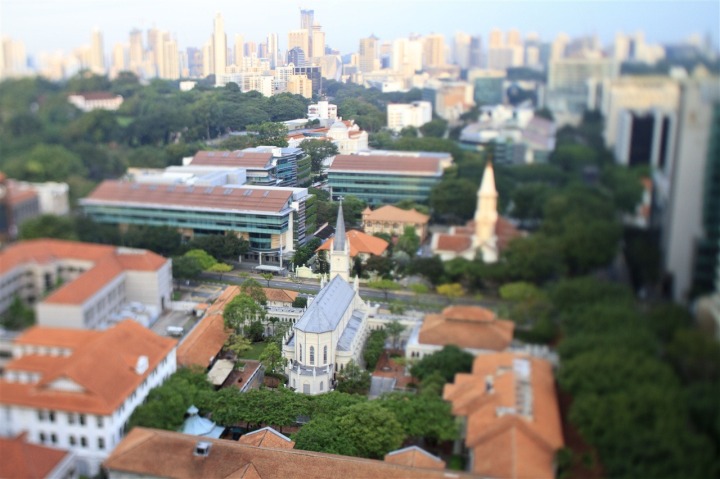 We cruised on over to the airport and wandered around a bit.  Singapore’s airport is often ranked the best in the world due to all the free amenities it offers.  Everything from Koi Ponds with real orchids hanging above them, to little stamp things to stamp papers or boarding passes. 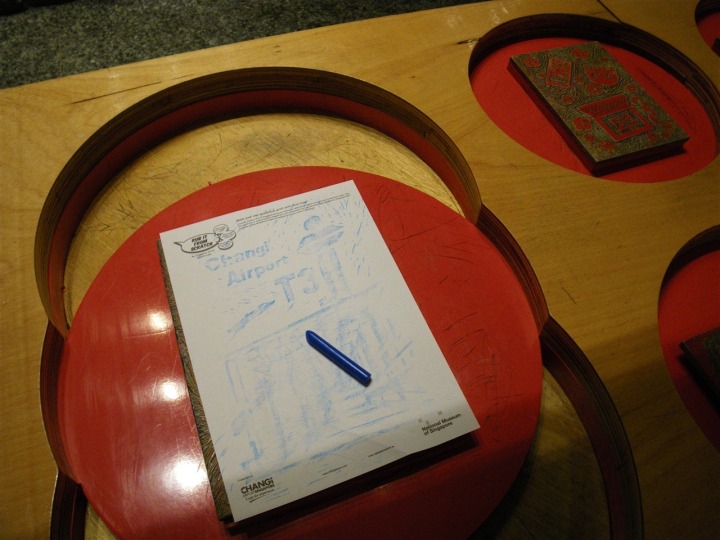 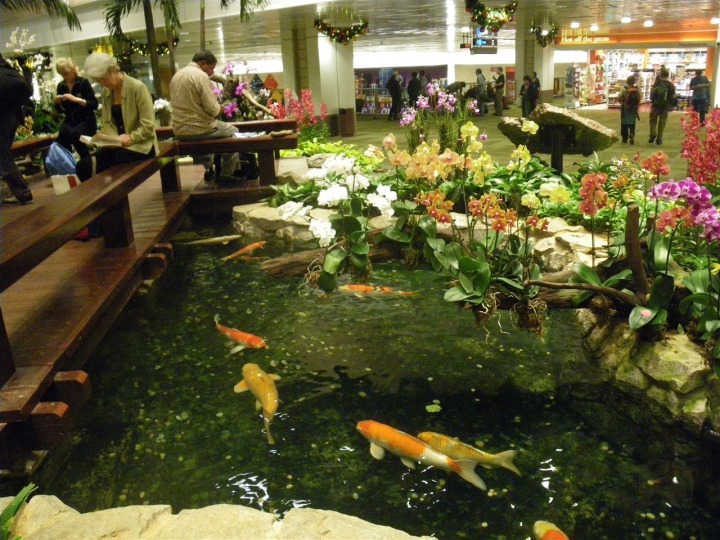 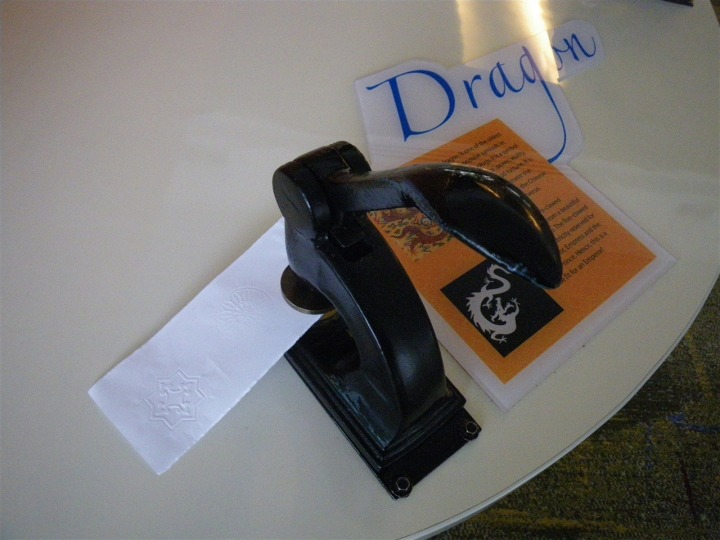 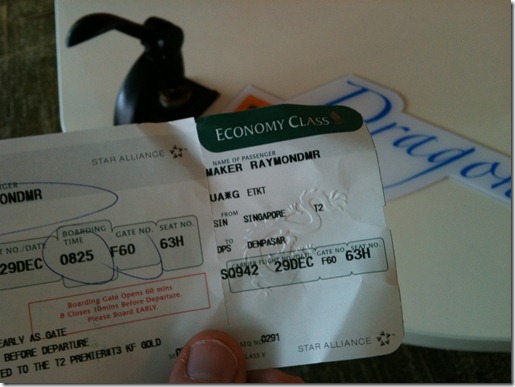 Once we were done playing we boarded yet another Boeing 777. 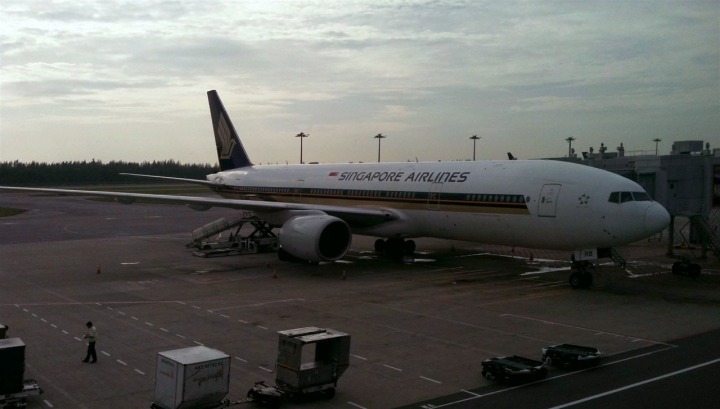 And this plane even had Nintendo games on it – for free no less!  I played a few rounds of F-Zero, just like a 10-15 years ago.  Good times!  No Mario Kart though…a shame. 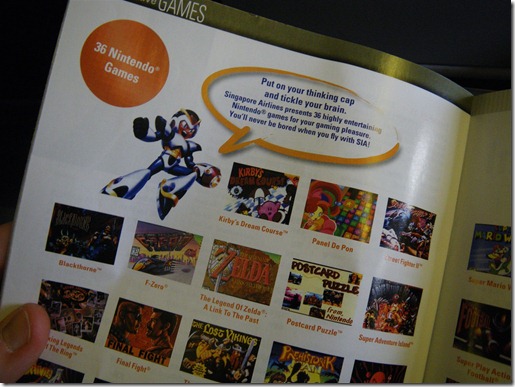 About two hours later we started our descent over the southern portion of Bali – a tropical island that’s part of Indonesia, and where we’ll be for the next 5 days. 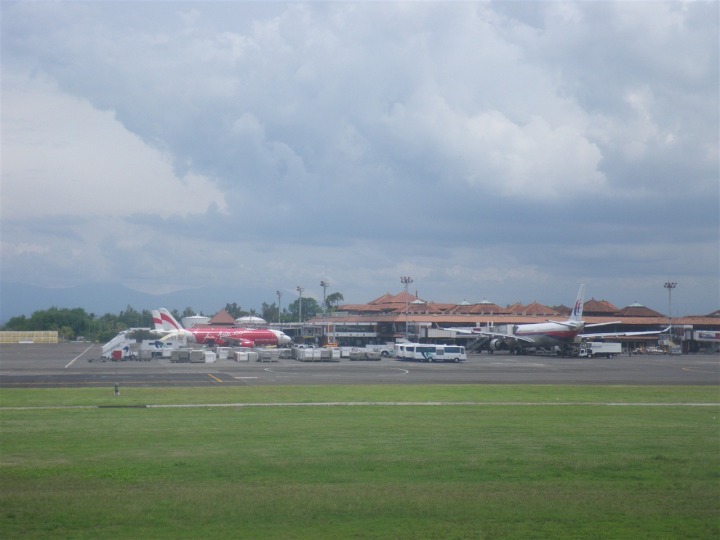