Reminder and tips: The triathlon registration season is upon us

Yesterday I was sifting through a slew of e-mail messages in what I’d consider a bit of a ‘junk’ e-mail account – essentially one I use for things like race registration (who really needs that Brightroom holiday photo offer for photos taken a year go?).  In doing so, I noticed that this week there’s been a bunch of race companies that are about to open up registration for races in the coming weeks.

For those that are old hand at this, this serves as a bit of a friendly reminder.  Especially for those that are still wrapping up the year and marching towards races like Ironman Florida.  I know when I was doing that the last thing I was thinking about was next season already.  Yikes!

But for those newer to triathlon you might be surprised to learn that most non-Ironman races open up in the fall for the following year.  This is done for a number of reasons – it starts from race resource planning and allocation to concepts more simple: Allowing athletes to plan their schedules.  Most triathletes will progressively increase distances over the course of the year towards their ‘A’ race (their primary/goal race that they want to do well at).  If a race organizer doesn’t open up or offer registration early, many of those doing longer distance races will lock down their schedule elsewhere with other companies (versus being left high and dry later in the season).

For example, if an ‘A’ race is a Half-Iron distance in July, one might do an Olympic distance in June, and a sprint distance in May.  And if the local weather permits, perhaps another sprint or duathlon in April (usually water temps are the issue).  In general, for peak performance and training cycles most folks try to stick to one race per month, with usually about a 3 or 4 week gap between them.

You can iterate through races more frequently for shorter distances than longer.  And of course, fitness levels play a heavy part in this.  If you’ve been training for Ironman races and come off an Ironman in June, you can easily iterate through just about anything shorter in August/September at a higher frequency (I’ve done that in past years).

Personally, I prefer to load longer events earlier in the season (June or early July) as I like to ‘have my summer’, versus being a bit of a ball and chain to 6-8 hour rides and 2-3 hour runs all summer long.  Plus, I have a bit more fun doing shorter distance races.

As for scheduling, you can use sites like USAT to find races (though not all will be on there), as well as looking at what races your local triathlon club is doing.  Typically, most triathlon clubs are present in some capacity at most local races.

And remember that all Ironman branded Iron-distance races open up the day after the race, for next year.  Ironman branded 70.3’s vary a bit – some open up a year ahead, and some like the popular Oceanside 70.3 in California open up about 9 months out (already sold out).  For even more popular races you may need to be quick with the mouse at midnight, as some sell out in minutes.  One of those used to be the NYC Triathlon, but now they’ve moved to a lottery system to reduce the traffic jam (online, not on the course, that’s still there).

Local races can vary as well.  Most local races are opened for a while before they sell out.  But some have a cult-like following and sell out almost immediately.  Locally put together races are also great because they tend to be cheaper (and sometimes have better services and features).

You’ll want to use those sites (USAT site, TriFind, Slowtwitch Calendar, local club sites, Beginner Triathlete, etc…) to find out when the races open up and then put together a calendar for opening.  Then set reminders in your phone/computer.  I wrote last year a bit more on how exactly I setup my race schedule, and the thinking that goes into it.  Note that in general, no single site out there seems to have everything 100%.  Also, many times next year’s schedules aren’t updated early enough.  So instead, look at the current year’s calendars and then find those same races next year (almost always on the same weekend). 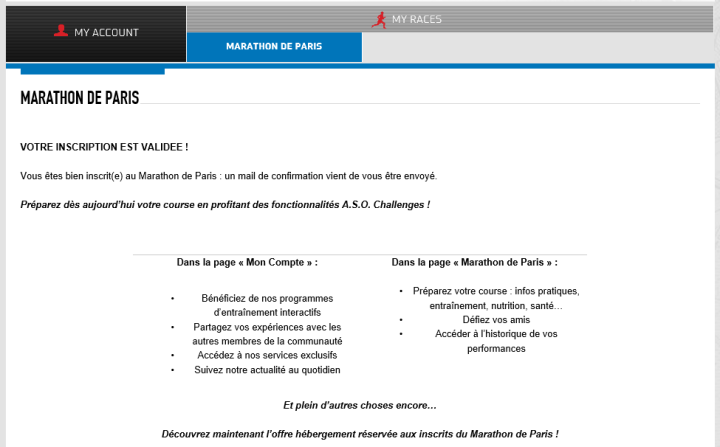 So what’s my schedule look like?  Well, not 100% sure yet (I know, my usual answer).  I’m still getting a handle on my work travel schedule, so I’ll be keeping things minimalistic until I can narrow them down.  If you’re not doing an iron-distance race or one of the super-popular races, you can be a touch bit more flexible.  Whereas, if you’re racing an Ironman branded race, you’ll want to have your season fairly well buttoned up (at least pre-race).

There are a few known big ticket items on the list for next year that I want to do:

Beyond that, I’m fairly flexible.  There’s still some races to do later this year (2012) – mostly for fun.  I’ve got a Santa Clause 10K here in Paris in December.  And then pending a bit more finalization around travel schedules, I may do a 10K in Singapore on November 25th simply because I’ll be there.

If you’ve got races that you know sell out quick, or that are opening soon – drop them below in the comments.  Especially if it’s a race series of sorts (that’s like five comments for the price of one!).

And, if you’re looking for fun race ideas, you can swirl through my race reports from the past (also on the sidebar in a slightly more organized manner).

As always, thanks for reading – and enjoy the weekend ahead (researching races!).  Hope this helps!