Norway in a Nutshell

I’m typically not a terribly big fan of organized tours.  I like to get out, explore, and wander around a bit on my own timetable.  Just the way I am.

But in Norway without either a car or many days, exploring the vast reaches of the country on your own timetable is fairly difficult.  It turns out they have a bit of a solution for this here – the Norway in a Nutshell tour.  It’s literally what it’s called.

It’s not an organized tour per se, but rather an organized and timed collection of railway, boat, and bus tickets that whisk you around probably close to 600 kilometers in a single day.  A single very long day. 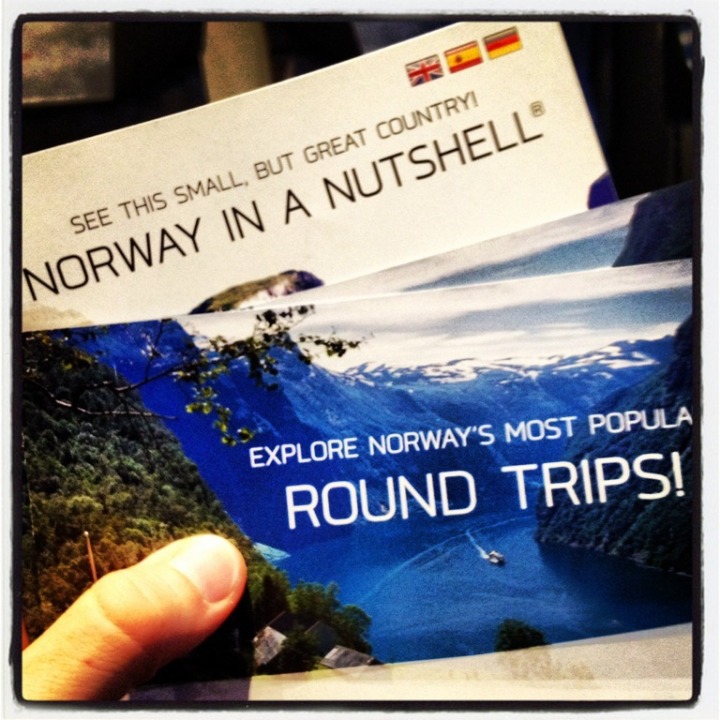 We stared on our first leg (train) at 6:31AM.  It was still dark.  Once again breaking my quota on the number of days each month I see sunrise.

The good news is there wasn’t much to do or think about for a while – so you could go back to sleep.  The train ride into the mountains would last five hours.  And no doubt, it was certainly scenic.  Though most of the really impressive stuff was as we neared the highest point on our journey – in Finse. 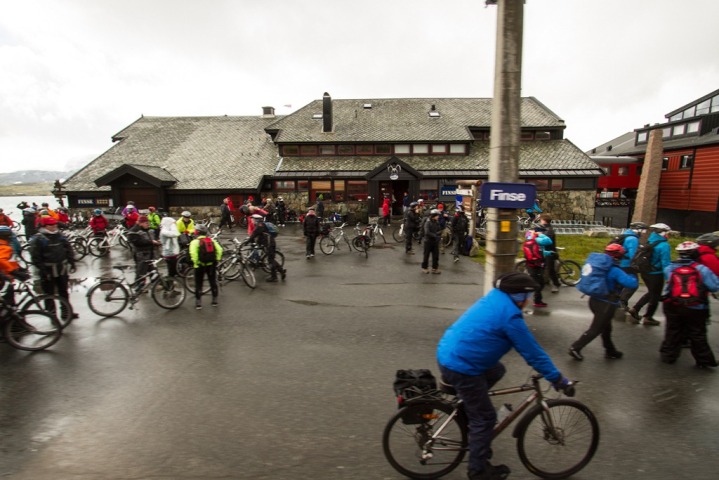 Finse is at 1,222 meters, or approximately 4,000 feet.  It’s also where there was a mass exodus of well layered mountain bikers off the train.  Given it was lightly snowing/slushing/raining, they immediately got use of the 18 layers of rain gear they seemed to have on. 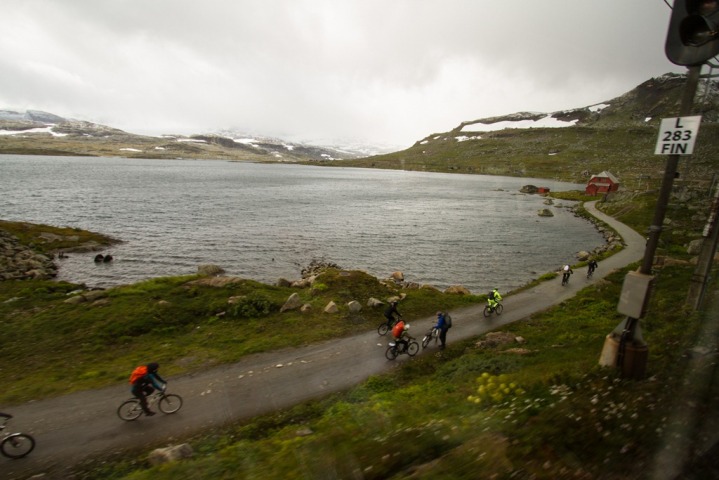 But for us, we had another 20-30 minutes on the train before we’d step out into the cold rain/slush.  Our stop was Myrdal, which is a tiny little station with only one particular reason to get out: The Flam Railway. 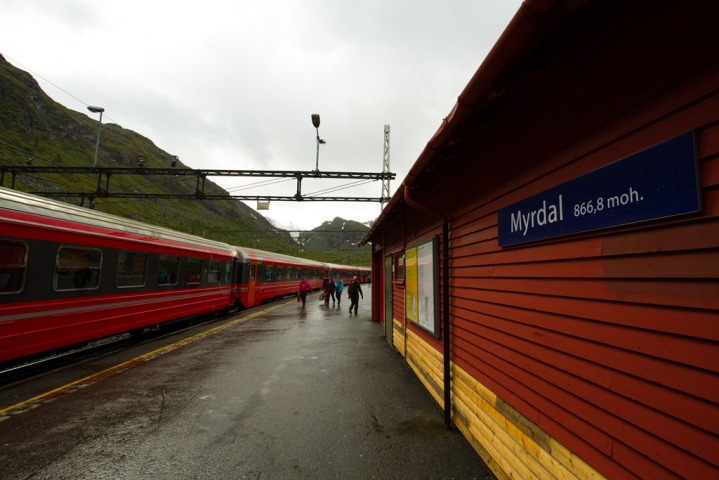 The Flam Railway is a short 20 kilometer route that drops from the 866 meters noted above, down to the water at 2 meters (effectively sea level).  In doing so, it wraps through and around the cliffs packed with scenic views of the valley below, waterfalls over the cliffs, and plenty of farms with sheep. 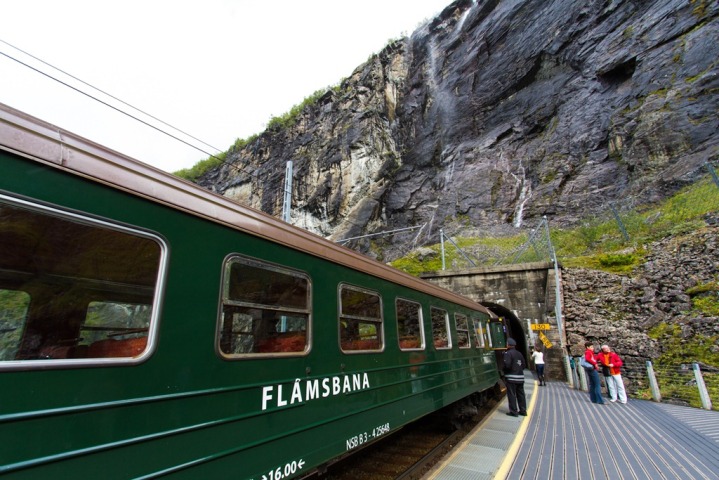 You can see the valley floor below us through the support beams flush against the walls of the mountain rock. 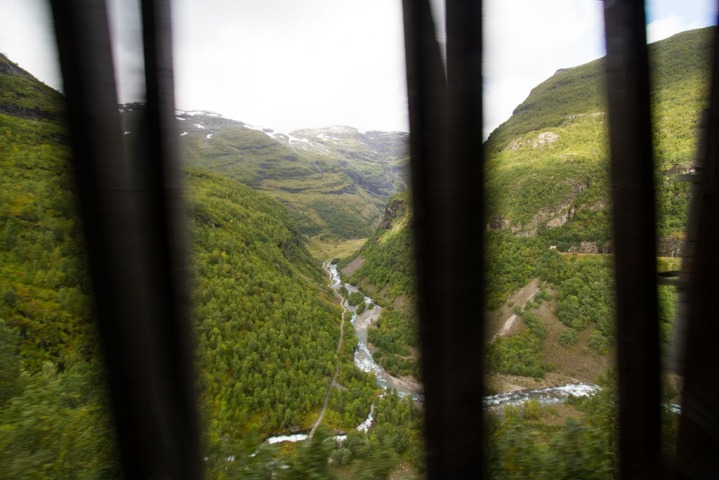 We’d make one brief stop for five minutes to check out a waterfall: 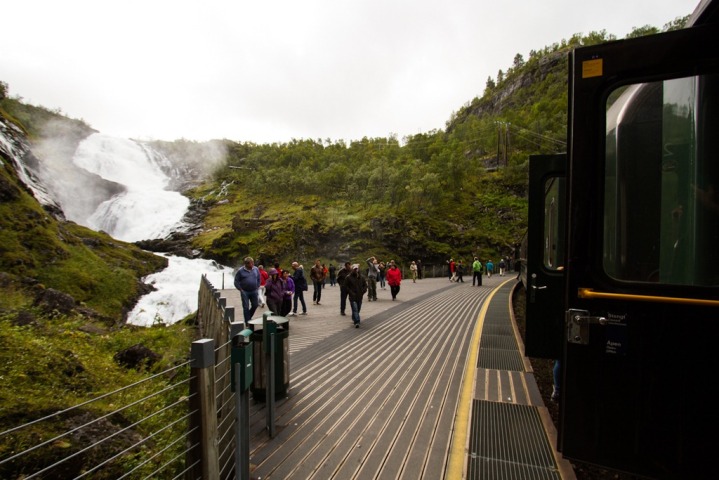 The train ride would end about an hour later down next to the boats.  It should be noted that while each individual leg did offer some minimal commentary, this isn’t like a tour with an actual tour guide.  It’s merely a collection of transportation providers (trains/boat/bus) that have re-timed arrival and departure schedules to create one cohesive journey.  You won’t find any ‘Norway in a Nutshell’ person or representative helping you along, or anywhere present.  You simply wander by yourself from ride to ride, with about 10-15 minutes in between. 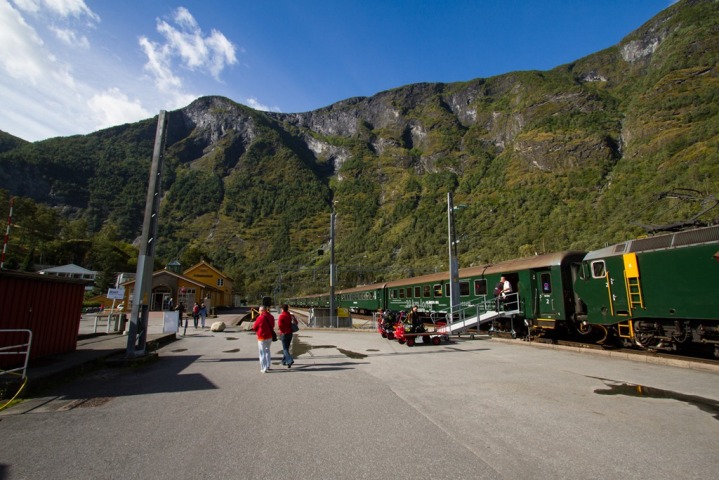 Below, our boat (third leg).  It appears to be a converted ferry boat – as the bottom level where cars normally would park was built out with picnic tables and a secondary plexiglassed in section to accommodate more people (and keep them out of the weather). 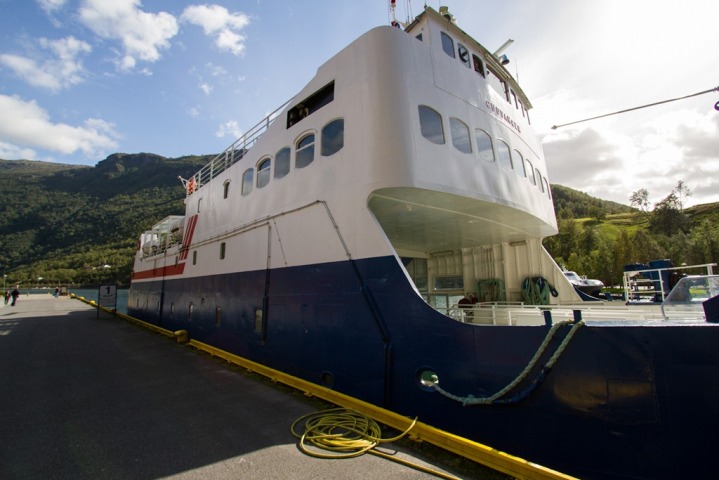 Here’s an identical boat just coming into port as we left: 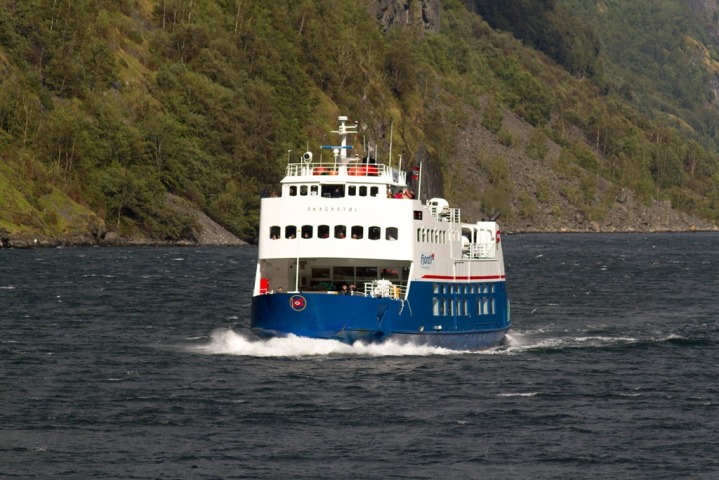 By time we got on the boat, we were pretty darn hungry.  The cafeteria car on the first train on the way up only opened up right before we got off, so we didn’t have much of anything to eat.

Inside the boat though, we found hotdogs.  And more importantly, hotdogs wrapped with bacon.  Seriously.  I should point out that everywhere we went, the Norwegians seemed to love hotdogs.  These are our kinda people. Looking at these pictures from the comfort of your computer, you’re likely in a warm place.

In fact, it was downright nasty out there at times.  It fluctuated all day long.  But the vast majority of the time the wind was strong enough that when I got up from my plastic chair on the deck of the boat, it unexpectedly flew away from behind me and shot across the deck with enough force and speed such that if grandma had been in the way she would have gotten run flat over (by the chair, not the reindeer – which they eat here).

Which brings me to these poor folks below.  I’m sure they thought the below journey would be fun.  However, I’d be curious what they thought about the journey at this juncture.  To me, nothing about dressing up like I’m going to the North Pole and flying across the water at 50MPH into driving rain seems terribly fun.  Note only the driver is smiling. 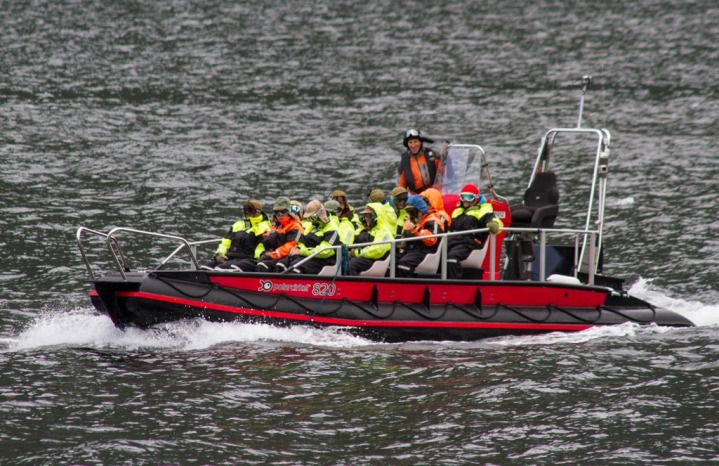 But, the boat itself did take us past many pretty things.  From little waterside towns: 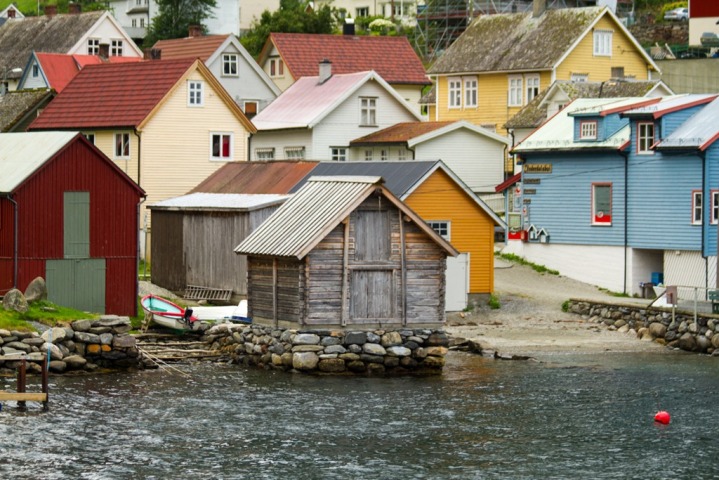 To gigantic hunks of rock that climbed thousands of feet into the sky. 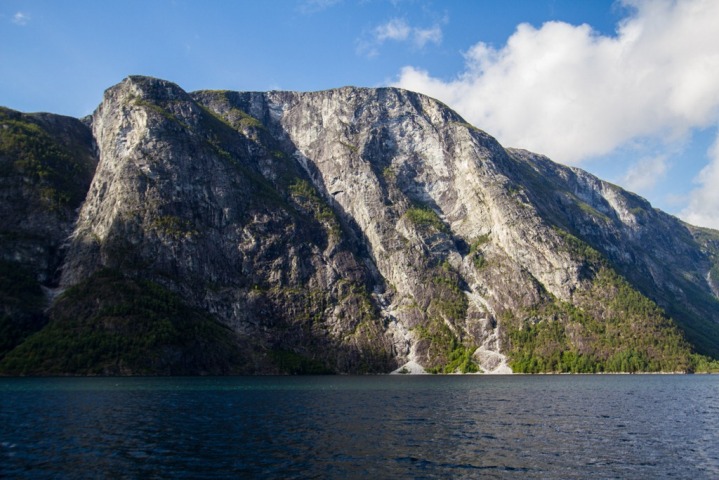 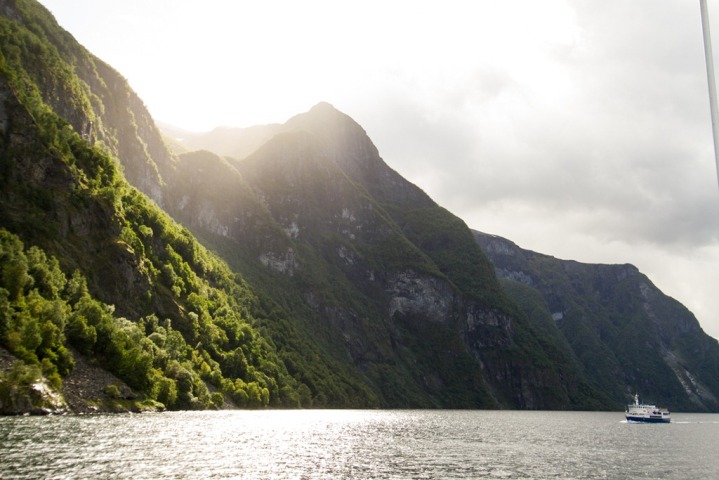 Note below, the plastic chairs of death.  Ye who get in their way gets a (complimentary) puncture wound. 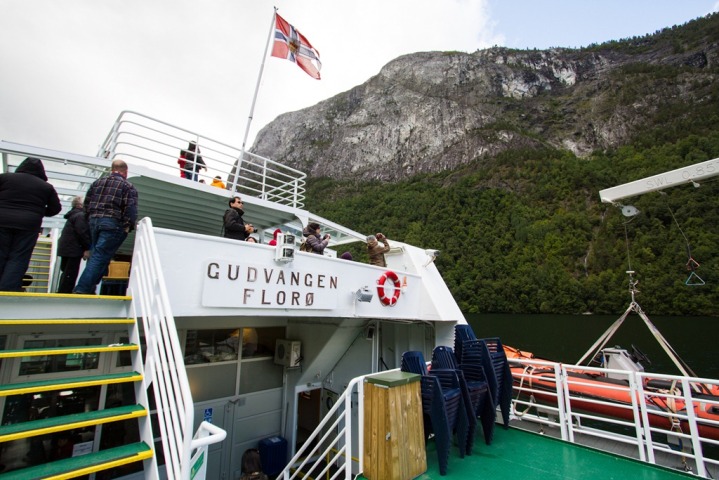 It was rather fascinating to watch how continuous and quick the weather changed – even on our two hour boat road.  Multiple times it went from sun (seen above) to driving rain (seen below).  No matter though, it was still cold and windy. 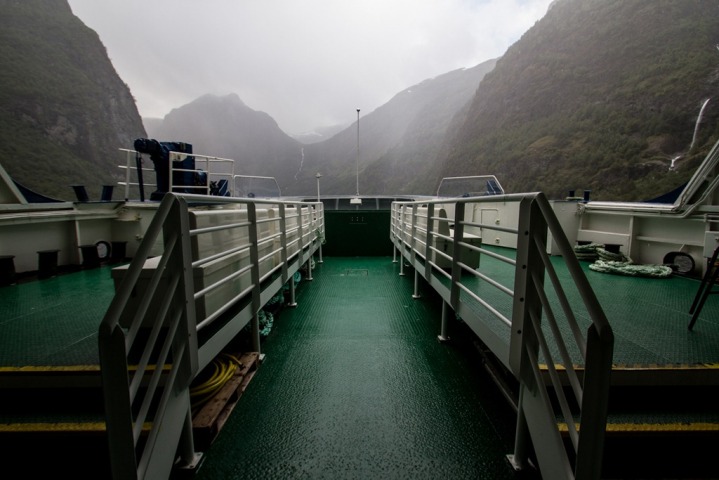 Which brings me to the Norseman iron-distance triathlon, which was held last weekend.  You can watch a video of it here.  For those considering doing that race, note in the beginning when the racers in Transition #1 have their hands shaking uncontrollably (right at this spot).  Further, for those considering racing, I’d suggest you get on a similar boat (like I was), and go outside without gloves in the driving rain and watch the video.  I assure you, it’ll change your mind. 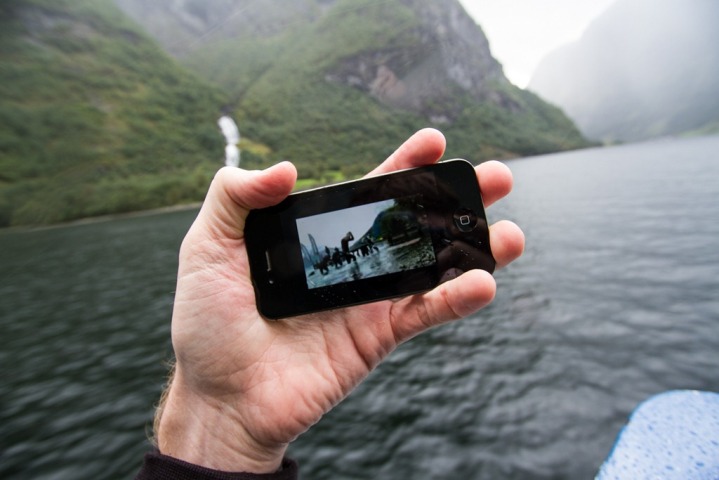 I had put the Garmin Fenix on tracking the full ride.  It was even able to tell me I was in Norway…just in case there were any questions on that.  Beyond that, I still maintain the map in its current state is useless. 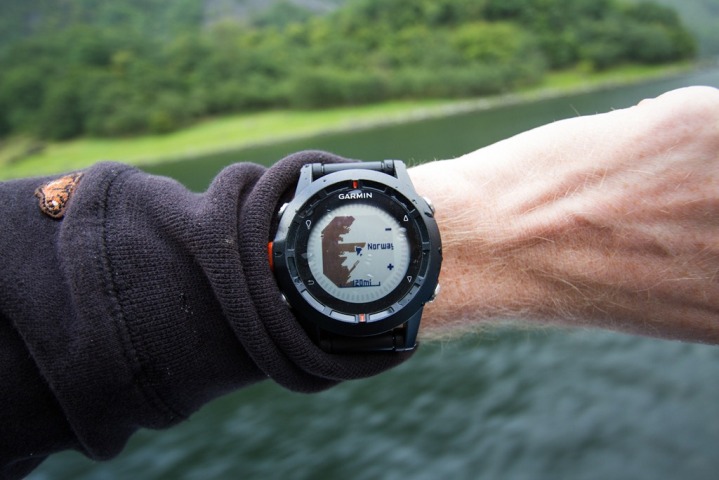 After the boat ride, came the bus ride.  It was a short 100 yard walk between boat and bus. 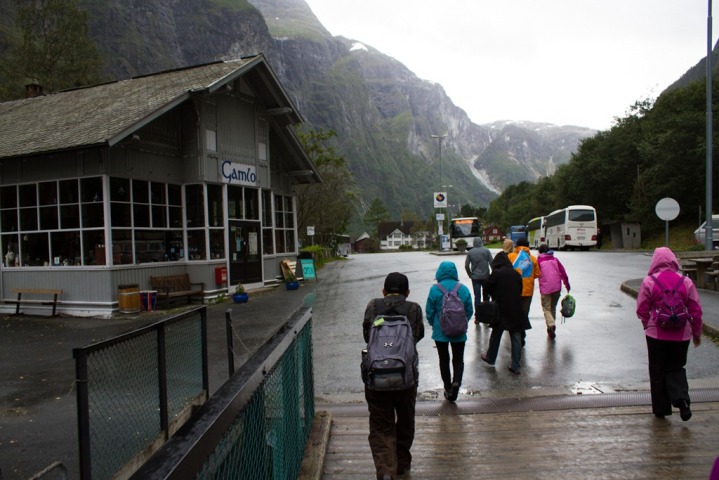 Below was the only sign we saw all day referencing Norway in a Nutshell.  I suspect they added it to avoid any scenarios of tourists getting on the wrong tour bus (such as one of the chartered ones) and wandering off into the countryside with some tour group from China. 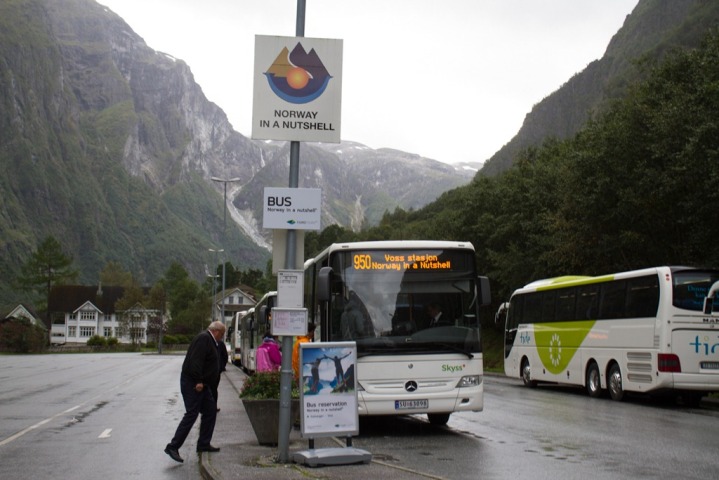 The bus ride was downright crazy.  The bus descending down this incredibly steep switchback section with 18% grades.  The switchback roads made the stuff you see each summer in the Tour de France look like child’s play. 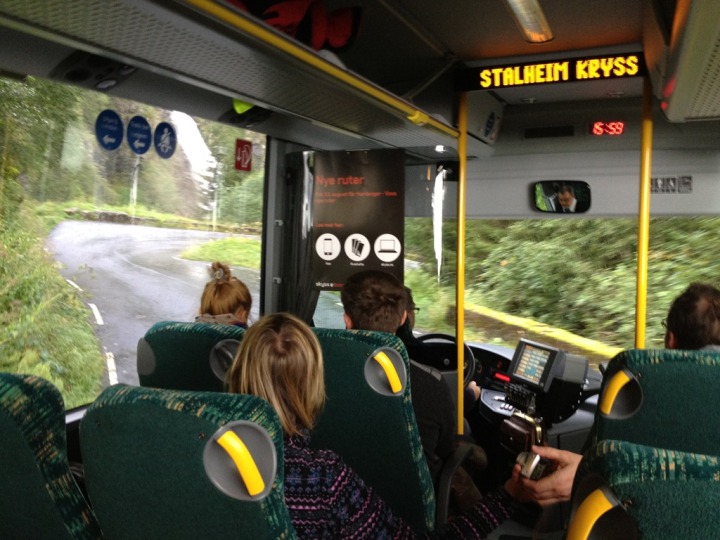 After an hour on the bus – including picking up and dropping off locals along the way – we departed at the train station in Voss.  All that’s really relevant is it’s another nice little town in Norway.  This station is on the same train line that we took over as part of train #1 – just further away from Oslo.

We had our biggest bit of free time of the day (25 minutes), so we spent time first with the two dudes hanging next to the station. 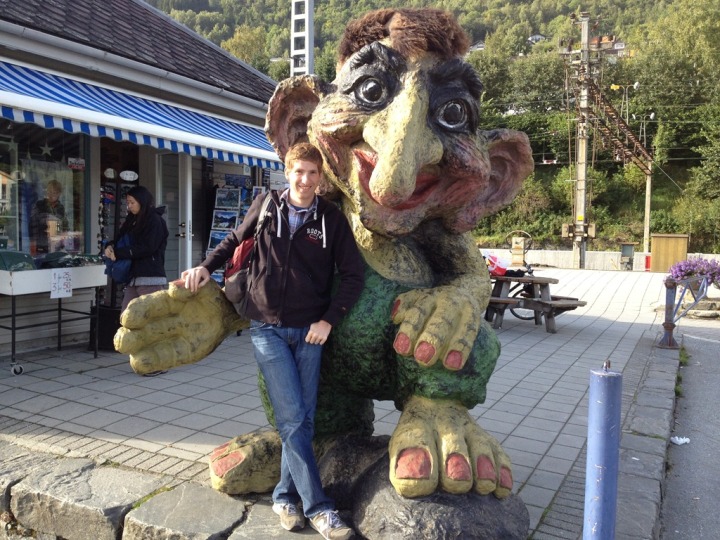 We thought they were appropriately sized. 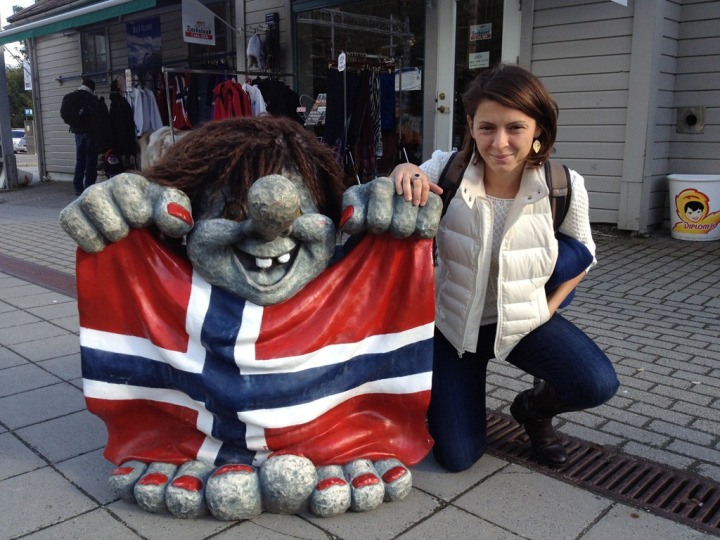 And then we went across the street to the gas station to get some food.  I noticed they had quite the selection of chocolate milk containers.  Including one that appears to have some relationship with a brownie.  Why is this brownie variant not more globally distributed? 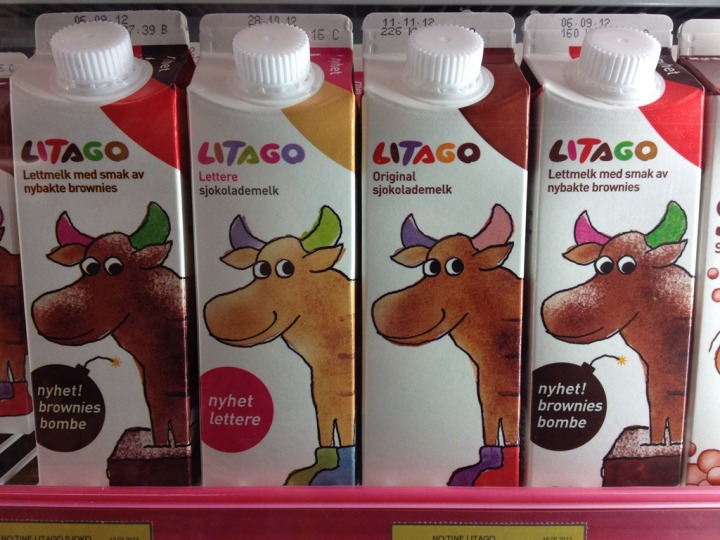 With that, it was back on the train we went.  This time for 5.5 hours.  As we peaked at the mountain passes again, I noticed the below train car.  Check out that fan blade system on the front.  This tells you they are serious about snow removal.  In fact, you can even do Norway in a Nutshell in the winter (at which point, it should just be renamed ‘Norway for Nutcases’).  Though, I did see a number of ski areas along the way, so that is certainly tempting… 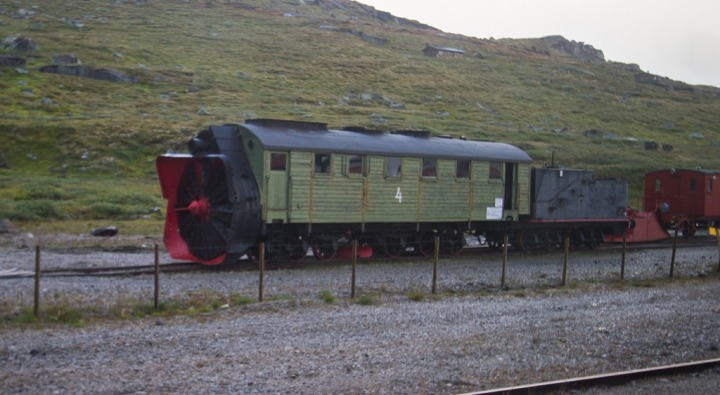 Here’s a handful more photos as we crested across the mountains with the sun setting to our west. 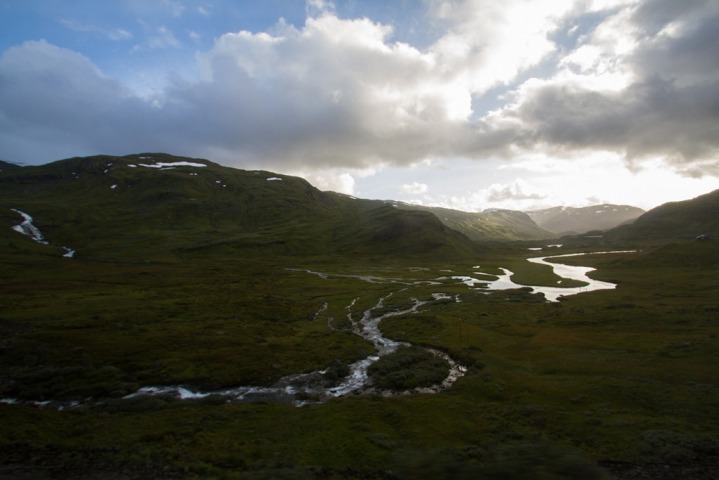 I love all the little red houses and cabins that speckle the landscape for hundreds of miles. 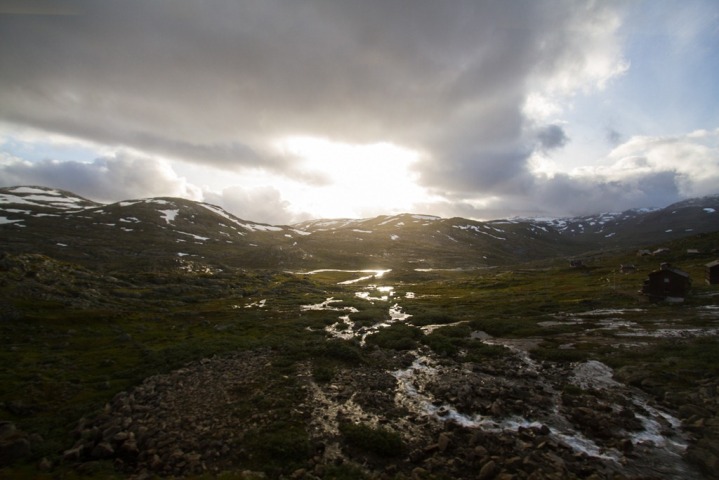 After many hours more on the train (which btw, had both WiFi and power ports) we arrived back in Oslo at 10:35PM, some 16 hours after we started. 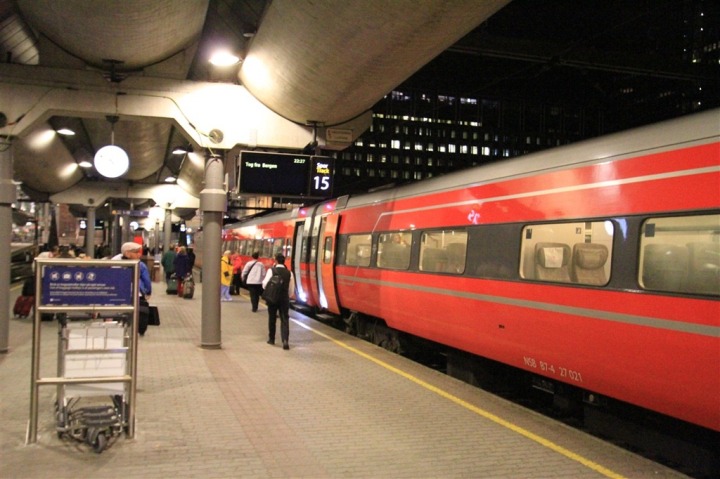 It’s said that if you go to Norway for only a short period, you should do the Nutshell.  And while it’s not exactly cheap – it was an awesome way to see as much as we possibly could see in a single day.  I’m definitely looking forward to coming back and exploring more though.  Especially doing the mountain biking along the Bergan line (the train we took).