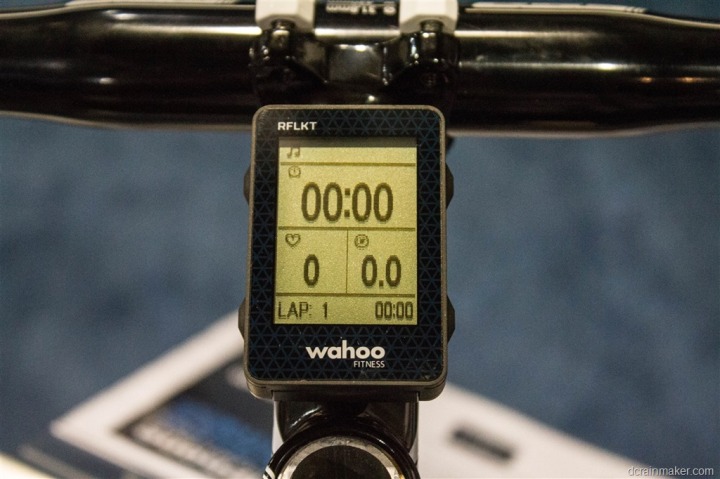 Today Wahoo Fitness showed off their newest product here at Interbike; the Wahoo Fitness RFLKT bike computer.  The RFLKT (pronounced ‘Reflect’) is the Bluetooth Smart driven bike computer that connects directly to your phone and displays the content of the bike app running on the phone.

In short, the RFLKT is essentially an external display for your phone – allowing you to take your phone along for the ride (which most do today), but not have to place it out on the handlebars in the face of danger.  Further, it reduces the battery hit to the phone by not requiring the phone’s display be turned on

The unit is different from most bike computers in that it does not connect directly to sensors, nor contain any GPS chip, or even have any user accessible storage.  Again – it’s part display, and part control.  With the buttons on the side, you can control the compatible applications and drive menu selection.  Or, depending on the app – even items such as song selection or announcements.

The RFLKT works with any Bluetooth Smart (Bluetooth 4.0) enabled phone, though today only apps are available for the iPhone 4S and iPhone 5 (as well as the newest iPad).  The unit pairs with your phone in a manner pretty similar to pairing of an ANT+ or Bluetooth Smart Sensor: 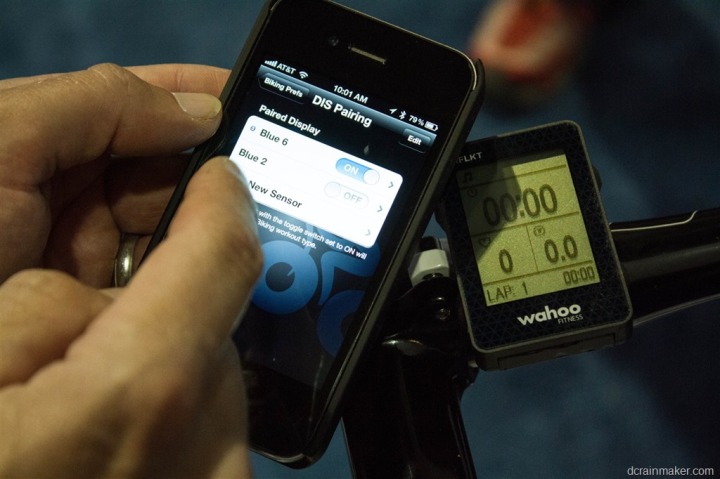 The device gives developers a clean slate (and display) to determine how to display data on the unit, as well as what the four buttons do.  In effect, this is like a Pebble watch for your bike.  The phone does all the work, and connects to any applicable sensors (i.e. heart rate strap, power meter, etc…) on behalf of the RFLKT.  There is no direct connect between the RFLKT and the sensor – only between the RFLKT and the phone. 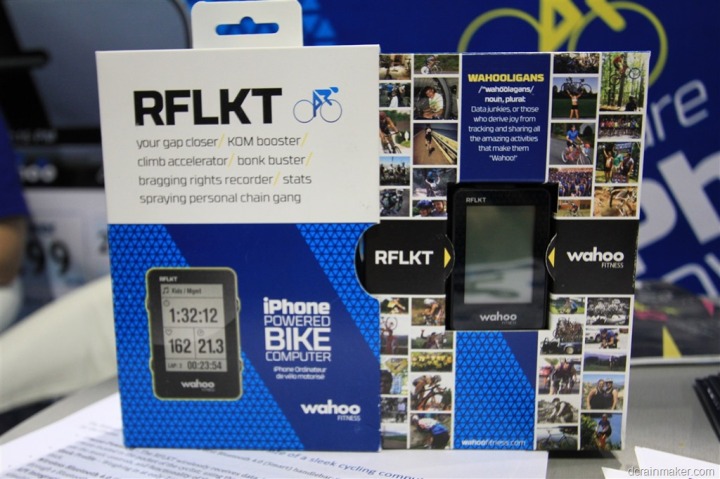 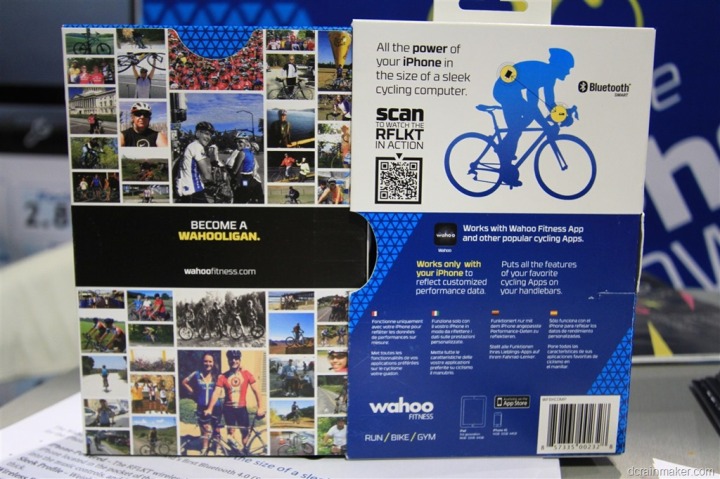 Today, there are two apps available – the Wahoo Fitness app (free) and the CycleMeter app ($5).  The Wahoo Fitness app is a good starting point for most, but the CycleMeter app offers far more flexibility in configuration (which I’ll dive into in a moment).  However, any other developer that currently uses (or wants to use) the Wahoo Fitness SDK can leverage the RFLKT display.  For example, in talking with the TrainerRoad folks, they are looking at how they could leverage this to act as a head unit for TrainerRoad – connecting over Bluetooth Low Energy straight to a PC (with tiny $10 USB BTLE adapter), or most new Macs (includes Bluetooth Smart built-in). 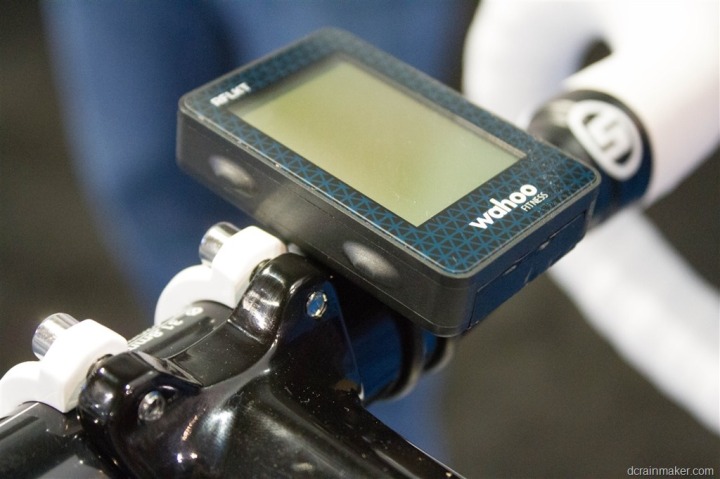 The RFLKT runs on a single user changeable CR2450 coin cell battery, that should get about 18 months of use before you need to swap it out.  After which, you’ll swing down to your local drug store and pick up a new one for $3-5. 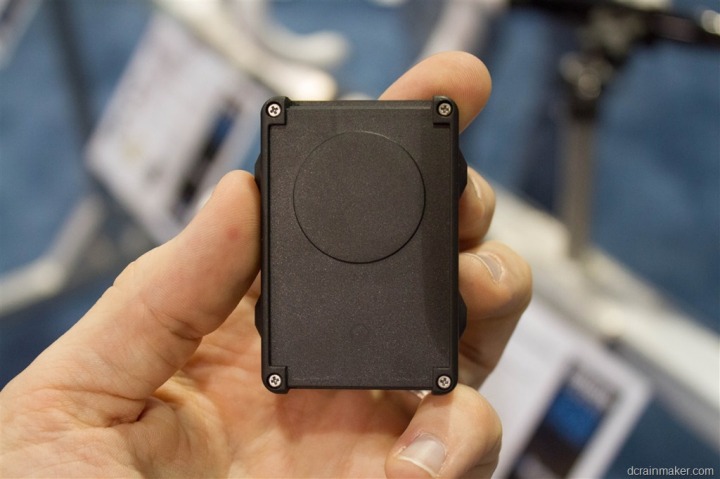 The unit includes twobike mounts inside the box – a mount that can be used either on the stem or handlebar, and then a forward bar mount (like the SRM): 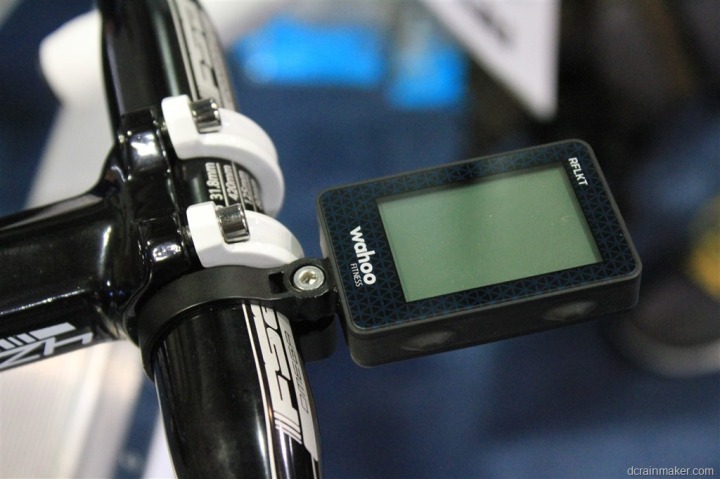 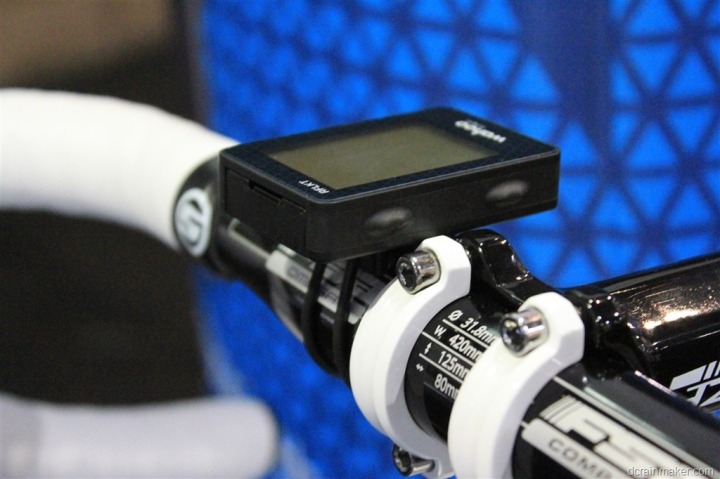 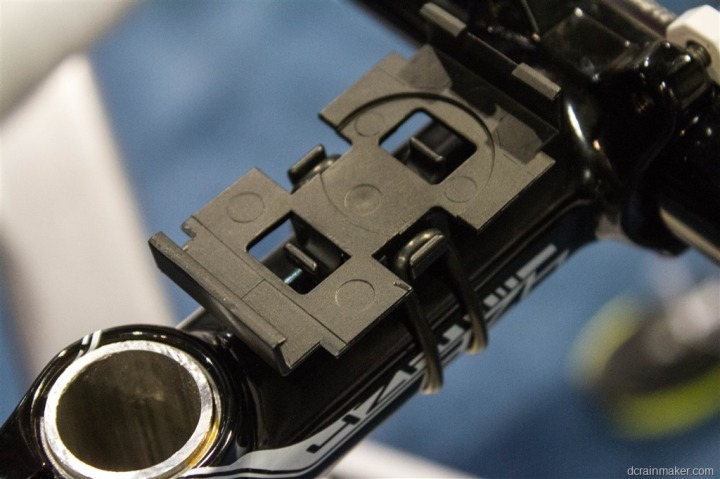 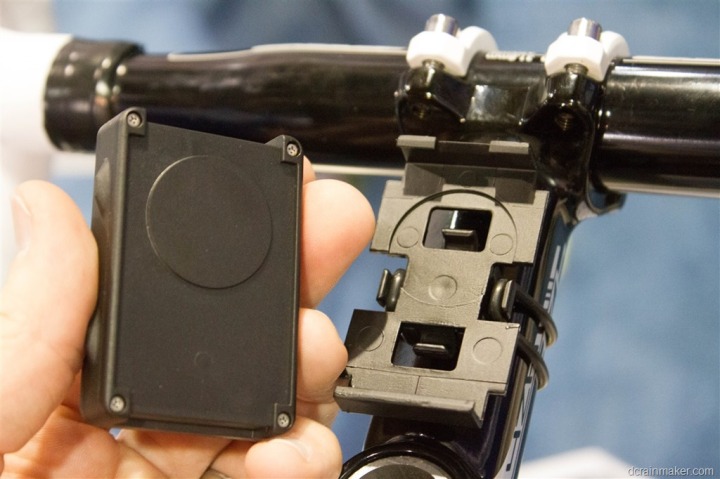 Because the unit is simply displaying data from the phone, you’ll be able to display and control the Wahoo Fitness KICKR trainer via your phone, which was announced last month at Eurobike.  This gives them a head unit for the KICKR that doesn’t require the user interact with a phone while in the middle of a hard trainer workout. 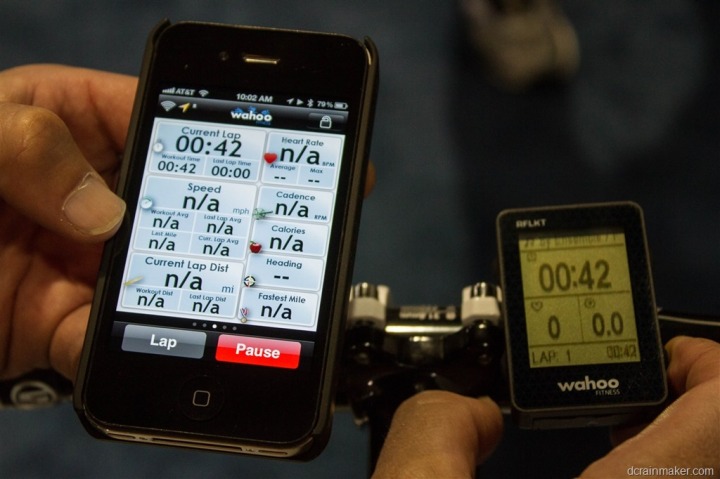 As you can see above – the unit is pretty slim, slightly smaller than an Edge 500 in both width and height.  Here’s a quick size comparison shot I took.  You can see the RFLKT is a hair bit smaller than the Edge 500, but the screen is definitely bigger. 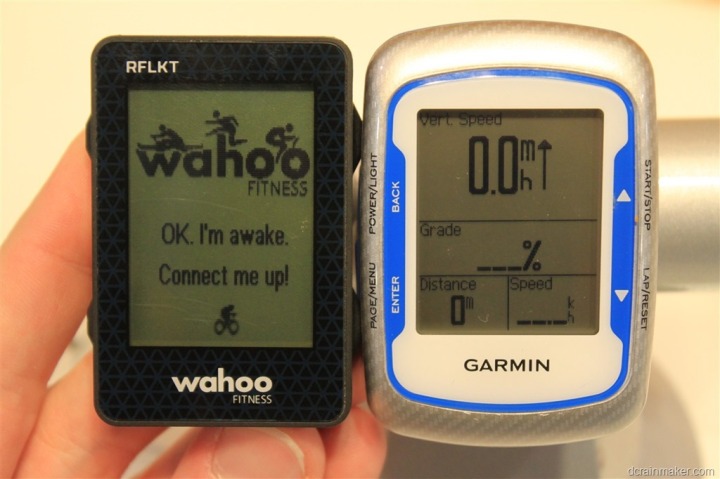 From a width standpoint, they’re nearly identical as well. 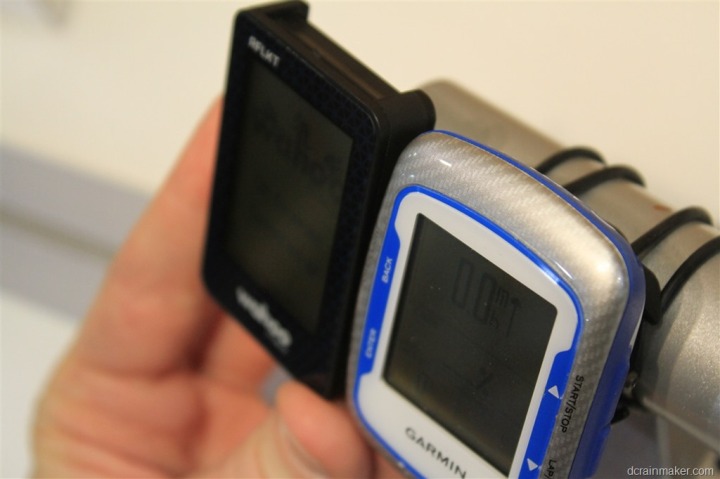 Here’s a couple of individual profile shots of the RFLKT: 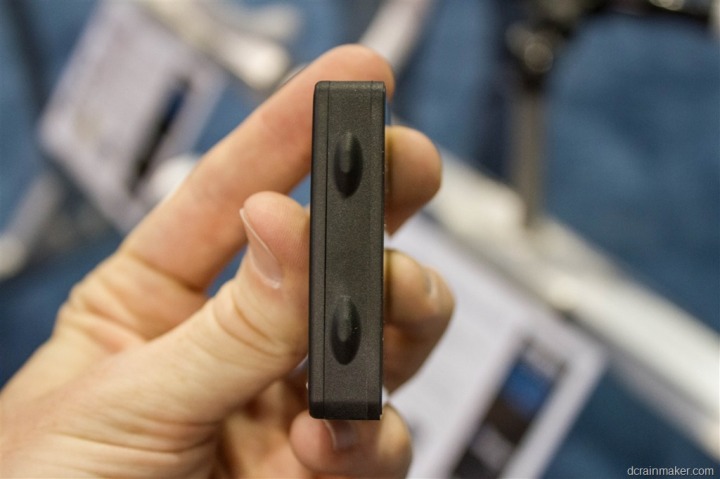 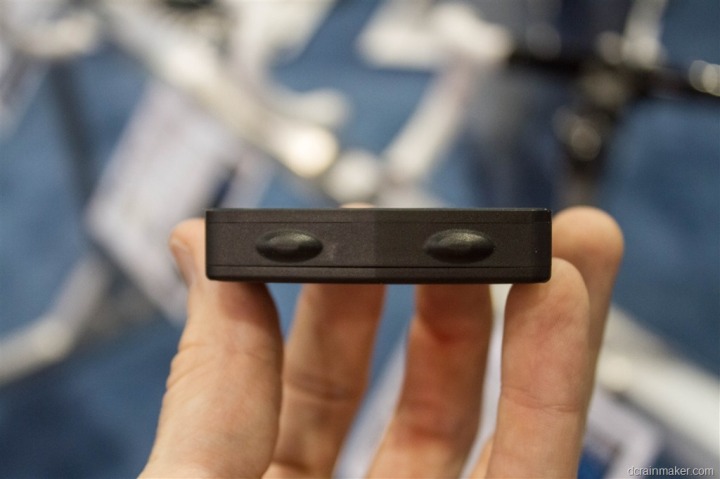 CycleMeter on iPhone is the first app to offer integration with the RFLKT.  They are using the RFLKT to display user customized data from their iPhone app onto the RFLKT display.  This effectively allows them to directly compete against companies like Garmin, Timex, Polar and others – despite their app only costing $5US. 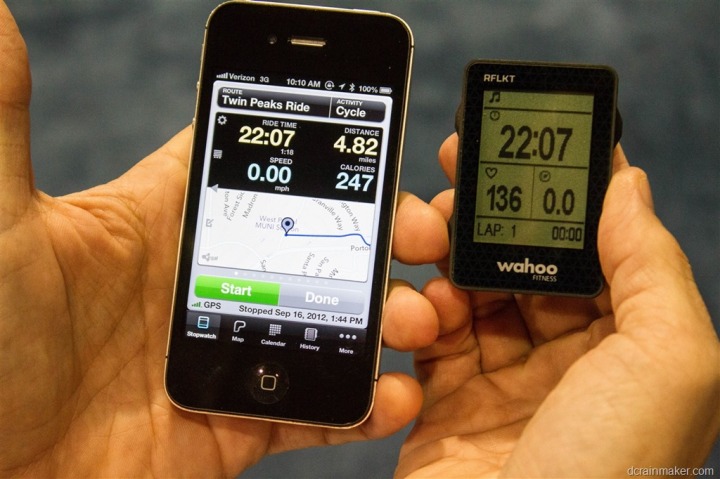 In playing with the app, it has some pretty immense customization options around data display.  With the compatible build they had at the show, they were showing up to four data fields on the RFLKT, but he noted that by time release they’ll allow you to display up to eight data fields – the same as the higher end Garmin bike computers: 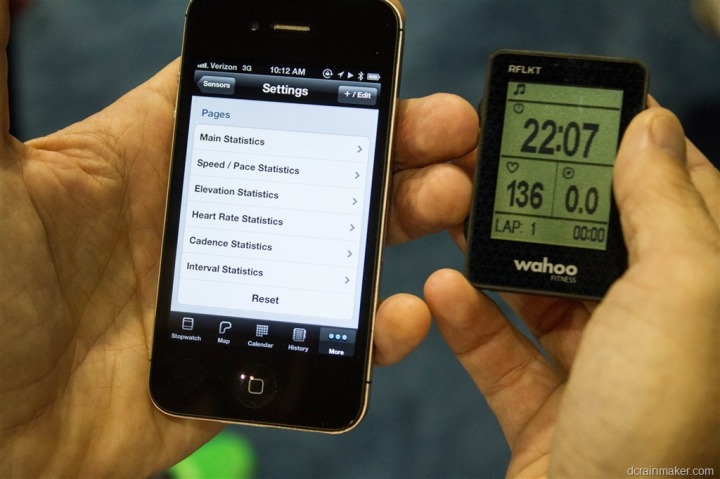 As they near release, they’ll also be adding in graphing too – enabling apps to display simple graphs of your choice, such as elevation or heart rate. 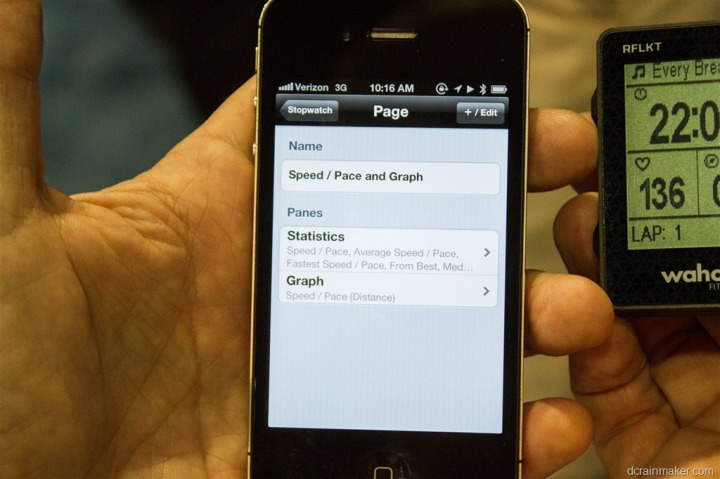 In the case of CycleMeter, they allow a ton of flexibility when it comes to modification and control over the buttons.  As noted earlier, the RFLKT is essentially a blank slate for developers, so in this case, they allow you to pick what each of the buttons do.  Plus, there’s the ability to recognize the difference between a single and double press, which means that buttons can be used for more than one purpose. 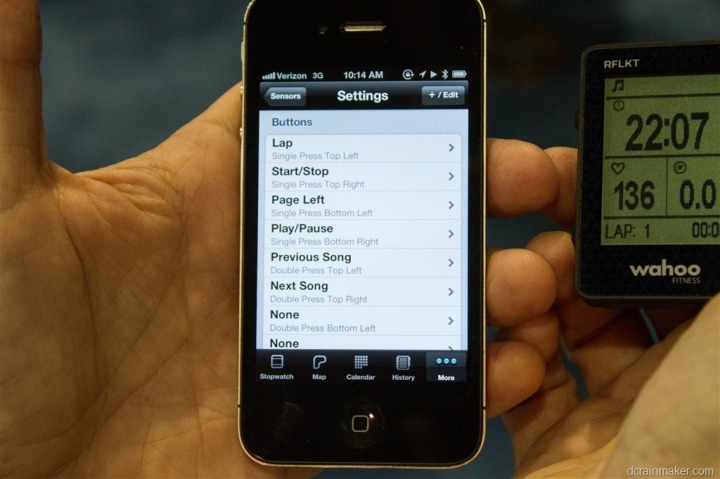 Like most Wahoo Fitness compatible apps, CycleMeter also supports playing of music – as well as control of music.  On top of that, you can use different buttons on the RFLKT to read out announcements to you via the audio stream, over the music.  For example you could have a button press that reads out to you your average pace on the ride – without changing display screens. 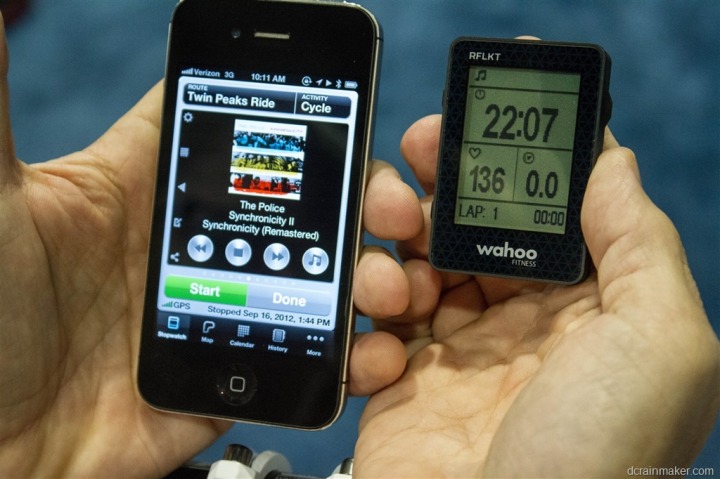 The RFLKT unit will sell for between $100US and $120US (not yet final), and will be available on January 1st, 2013.   They’ll also be shipping the unit international as well, like they do for the remainder of their products.  As noted, it includes the bike mounts as well.

As always, if you have any questions – feel free to drop them in the comments below and I’ll be happy to circle back with the Wahoo folks at the end of the day and get them all answered.