A few weeks ago I got in touch with the folks behind Velocomputer, who have been working on a Bluetooth Low Energy Speed/Cadence/Power Meter.  The unit is no bigger than your current standard speed/cadence sensor that you mount today to gather those metrics.  While here at Eurobike I had the chance to get a closer look at the prototype unit, and try it out.

Note that in the power meter world, there are two types of power meters.  Those that are  ‘direct force power meters’ (DFPM) and everything else.  Direct force power meters measures the explicit force that you exert on strain gauges in the device (i.e. PowerTap, SRM, Quarq, etc…).  Whereas non-DFPM devices calculate power mathematically using a combination known, assumed and measured values – to determine or estimate the power exerted (iBike, PowerCal, etc).  This particular device falls into the non-DFPM category. 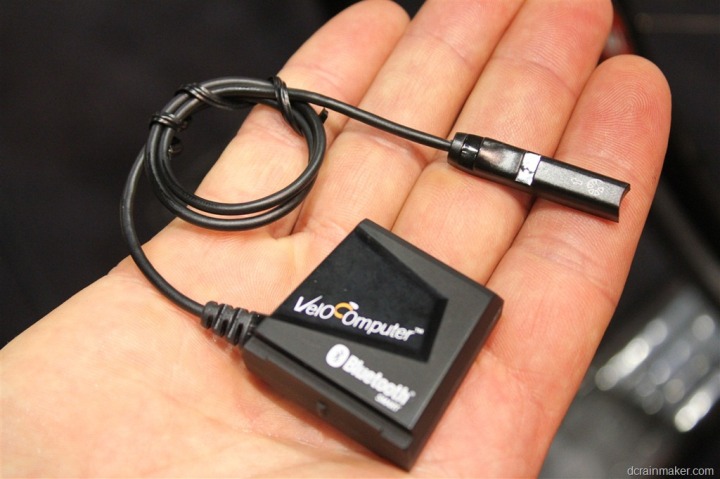 At first glance, the unit looks like any other speed/cadence sensor.  And in many ways, the different components serve the same goals.  First is the cadence sensor.  This is no different than any of the cadence sensors on the market today.  Two magnets pass each other in the night (one mounted to the crank and one inside the little pod), and cadence is determined each revolution.  Simple and straight forward. 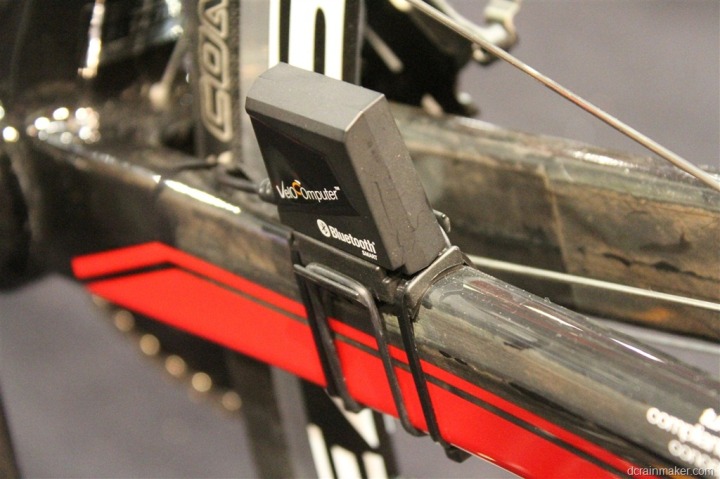 But it’s while gathering the speed data where things get interesting.  Like a normal speed sensor, there’s a magnetic bar mounted to the frame of the bike that’s monitoring the magnetic on the spoke.  And, like normal speed sensors, there’s also a magnet on the spoke.  But where things get different is that instead of the speed sensor waiting for the magnet to pass it each revolution – it’s actually monitoring the position of the magnetic throughout the entire wheel revolution. 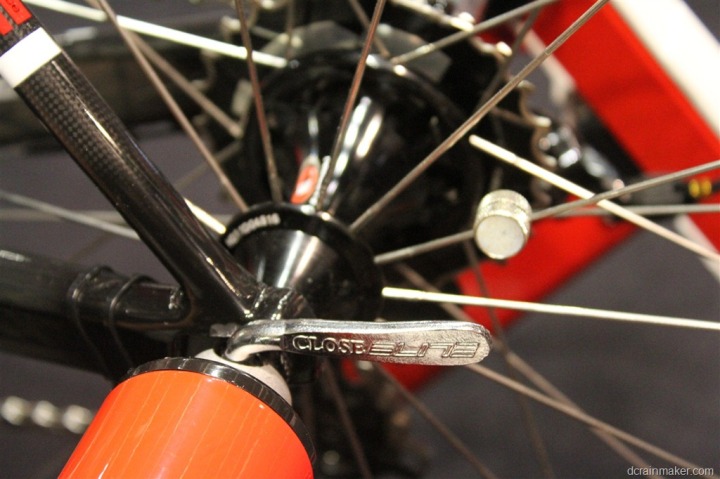 You can see above where the magnet is positioned it’s much closer to the wheel hub, versus a tradition speed sensor being positioned closer to the rim of the wheel.  The speed sensor itself is where those two zip ties are on the frame to the left.  By positioning things close to the hub, and with a strong enough magnet, the unit is able to track the magnet throughout the full rotation.  This in turn gives them the ability to produce distance accuracies within .01 meters (1cm, about a third of an inch), and speed accuracy within .01 kilometers per hour.  The magnet must be positioned within approximately a 2cm range on the spoke itself – but doesn’t need to be precisely positioned at a exact distance from the hub on every bike.  Meaning, there aren’t any installation related calibration issues likely. 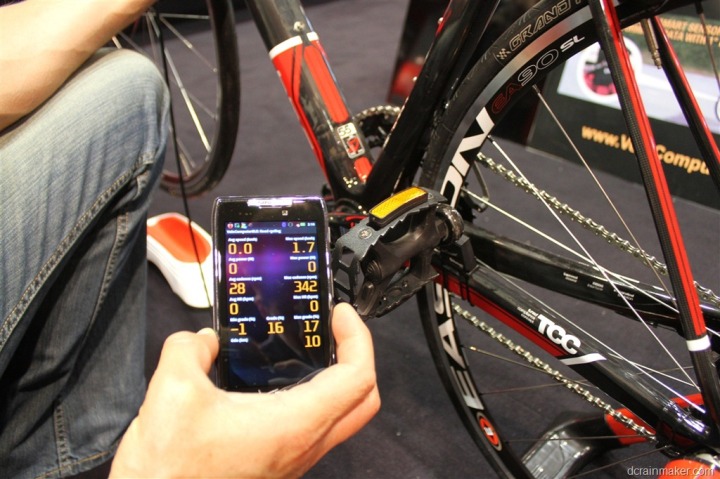 In order to illustrate this point, they demonstrated a very slow rotation of the wheel to the exact same position, and then demonstrated going in reverse to ‘undo’ the distance to the exact same point.  In order to track the position of the wheel for demo purposes, there’s a small divot/dot on the inside metal rim – just above where the brake is and equal to the valve stem.  You can see that start to move and then note when it comes back around again.

As your watching the video, you can see the distance (in the lower right corner) increasing slowly.

The power meter determines power by measuring the velocity of the wheel (via the magnet) and then multiplying it by the force.  The force is known by simply taking the acceleration (measured) and multiplying it times the mass (entered by you).  You enter your weight and the weight of the bike (including things like water bottles, etc…) in the app: 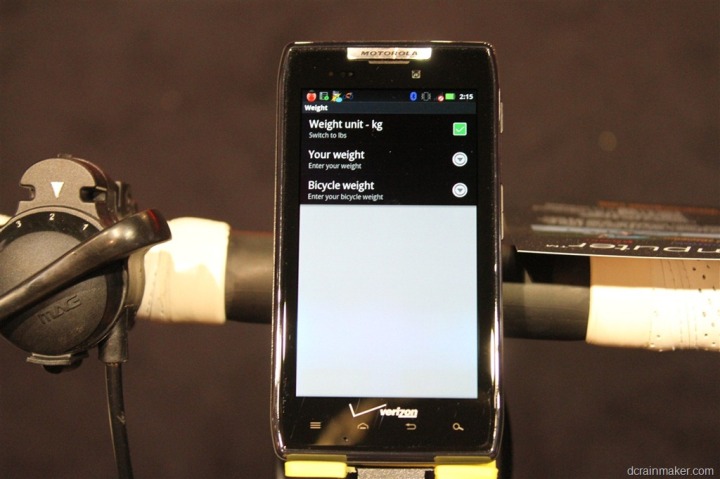 Given the equation, there are scenarios where this breaks down a bit – primarily, windy ones.  In outside riding there’s no method to measure the wind – and thus no way to compensate for a headwind or tailwind.  The power differences in riding into a 20MPH head wind would be substantial – but even small winds make a big difference.  Additionally, if you lose weight over the course of the ride (such as removal/use of water bottles) – you’d have some accuracy issues there (albeit minor).

Now – neither of these are super applicable to track cyclists – which is one of the reasons the product is primarily being tested in that area.  Neither is it applicable to folks spending time indoors on trainers.  Which means it might make for a reasonable way to turn any trainer into a $200 power meter.  During my test video you can see adjustment to the resistance unit on the trainer being made, and changes in wattage occurring.  These wattage values ‘felt appropriate’ to what I was pedaling, but it’s unclear on how accurate they were without a comparison power meter.

[Update: I checked more about how they were calculating the resistance on the trainer with the company.  It turns out the trainer power curve was defined in the app (resistance), which means that they’d either have to provide it for each trainer, or it wouldn’t necessarily be accurate.  In short, this isn’t ideal for a trainer.] 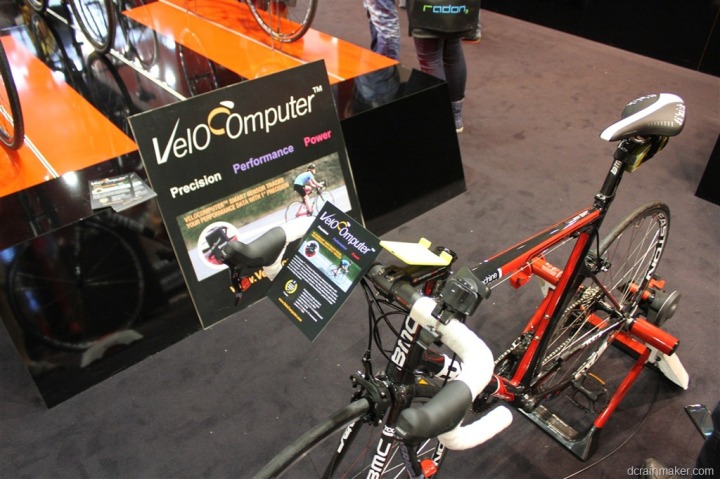 As demonstrated in the video, the unit will also record slope (as in incline) in 1* increments as well.  In the video that when the bike’s front gets picked up, and the phone app shows the values increase and then decrease slowly.

The unit will fit on just about any bike – including mountain bikes, as you can see below showing how the magnet can attach behind the disc brake. 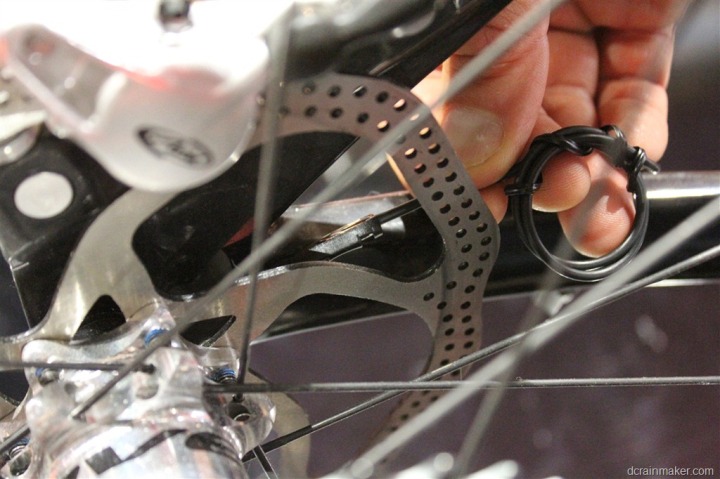 The sensor is powered via a standard coin cell battery and gets about 150 to 200 hours of battery life – depending on which precision settings you use.  Note that from a Bluetooth standpoint the power is actually calculated at the head unit (phone) itself, as opposed to be done at the sensor.  This means that it won’t likely work across the board with different apps in the future, only with their native apps.

Because the unit uses Bluetooth Low Energy (as opposed to regular Bluetooth), it will only work with Bluetooth 4.0 devices (as it’s a rival to ANT+, it’s not ANT+ compatible).  Today the most common phones that support that are the iPhone 4s and the Motorola Razr.  The demo here was done on the Motorola Razr (Android).  They have the Android app complete, and the iPhone app in beta. 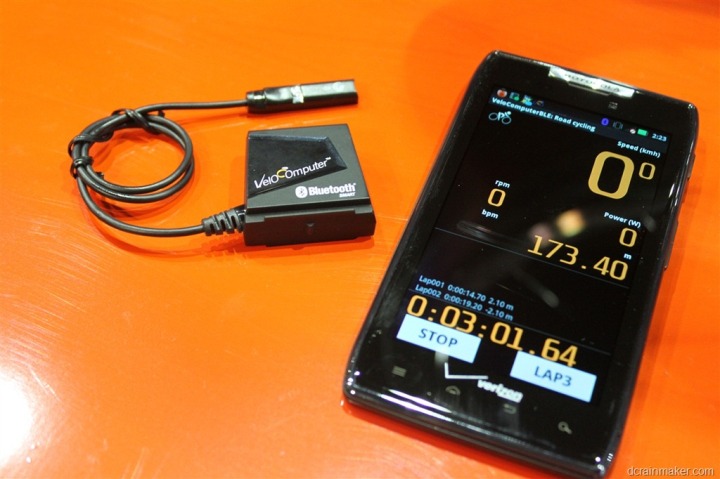 The app records the data to a simple CSV file which can be exported and imported to most training platforms.

The Velocomputer sensor will ship in November, and is available now for pre-order at their site for $200US.  Though apparently the first 100 folks get it for $100US.  As soon as I have a unit in my hands (hopefully Interbike) I’ll be putting it up against other power meters to see how it stacks up accuracy wise.

As always, if you have any questions – feel free to drop them below and I’ll try and track down the answers.