Photo of the day: A swimming pool on the highway

Yet this morning, that’s exactly what happened.  On the way to work, in typical DC stop and go rush hour traffic, I had a gigantic swimming pool in the lane next to me, as well as behind me. 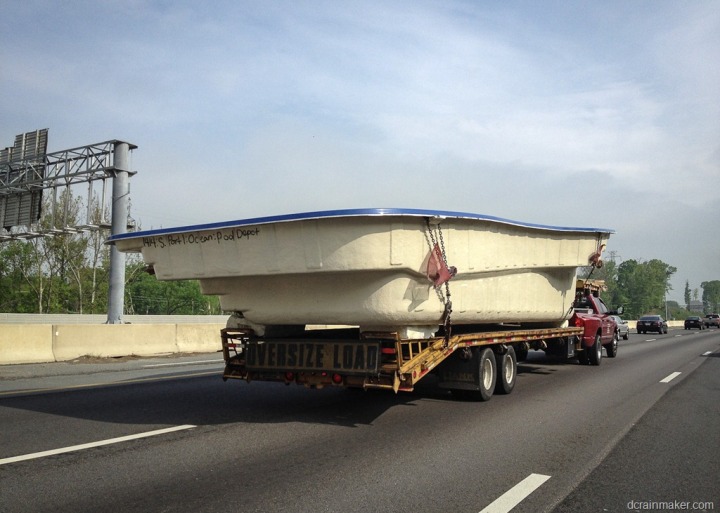 The flat-bed semi truck carrying the pool had one of the small warning ‘oversize’ trucks trailing behind it.  Though, it was hardly needed since the thing was just about visible from space.  One of the few loads I’ve seen on the road that everyone on the highway avoided.  The pool took up almost two full lanes in width, and a whole bunch of distance in length.

At one point, while stopped, it was directly behind me.  It’s definitely not every day you have a pool in your rear view mirror: 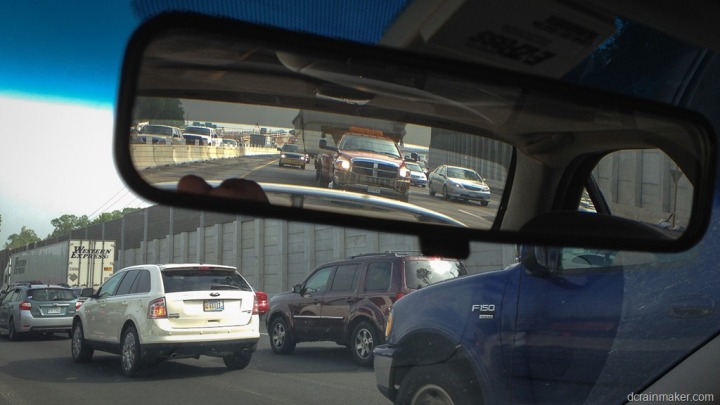 It was funny, nobody dared to try and pull off any funny business and pass it like they might otherwise try with other vehicles.  Nor did anyone get too close to the back.  At least one ‘pool-length’ back at all times.  Sorta like USAT drafting rules, except without a time penalty.

In my mind, this would have been an awesome aerial shot in gridlock traffic – with a giant swimming pool amidst all the cars.  But, I lack one of them newfangled aerial RC photo planes.  Someday I’ll have a fully vetted excuse to buy one.

Anyway, I figured everyone would enjoy the photo.  This would mark the second time I’ve seen an oddity on the highway related to triathlon.  The first time was the stellar bike-packing job on the back of that cross-country move truck.  Unreal packing ‘skills’.

And finally, as a side note – sorry about the slightly sporadic posting the last week or so, I’ve been extremely busy with a bunch of (exciting) major work-related items which have me up till roughly 2-3AM each day.  So I’ve been a bit time crunched to get through some of the review posts I’ve got queued up.  Hopefully next week will be a bit calmer.  In the meantime, I’ve been trying to answer small questions on various posts as asked (mostly review), since those I can eat like M&M’s in between items.  Mmm…I wish I had some M&M’s.

Hope everyone is having a great week, and thanks for reading!