A weekend with dueling power meters, activity monitors and more!

After a rather busy travel week last week, I was looking forward to relaxing a bit this weekend.  I landed safely back in DC around 1AM Saturday morning.  I mention ‘safely’ since our plane had a minor gear issue which resulted in the deployment of every Dulles area vehicle with blinking lights to line the runway upon our arrival.  Afterwards, we waited out on the tarmac while they lit up our plane with bright spotlights as if we were the highlight of an LA high speed chase.  A short bit later they decided we were safe to taxi on over to the gate. 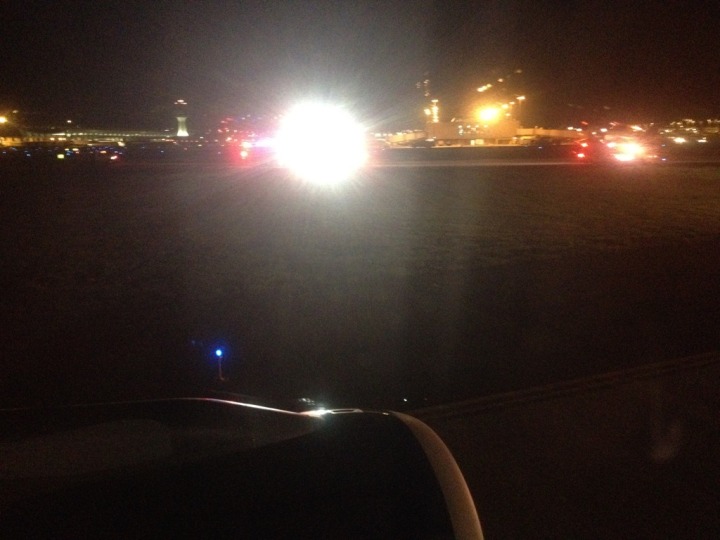 (Fear not, this photo is after landing and after they told us cell-phones were OK)

It’s funny though, immediately upon takeoff I knew something didn’t sound right with the gear – but couldn’t quite place it.  I suppose hundreds of flights on this particular aircraft type (Airbus 319) means you get used to every sound.  On the bright side (no pun intended), while they checked us out we got a good view of the shuttle hanging out on top of the 747, ready to head up to NYC (this is the non-flying shuttle after getting swapped out last week).

Actually, by time I woke up, it was more like Saturday afternoon.  Being I was on West Coast time still, this was perfectly acceptable in my mind.

After running a bunch of errands it was time to head out into the warmth and knock out a 10-mile run.  My route was would be a mostly straight-forward out and back along the paved path that runs in front of my house. 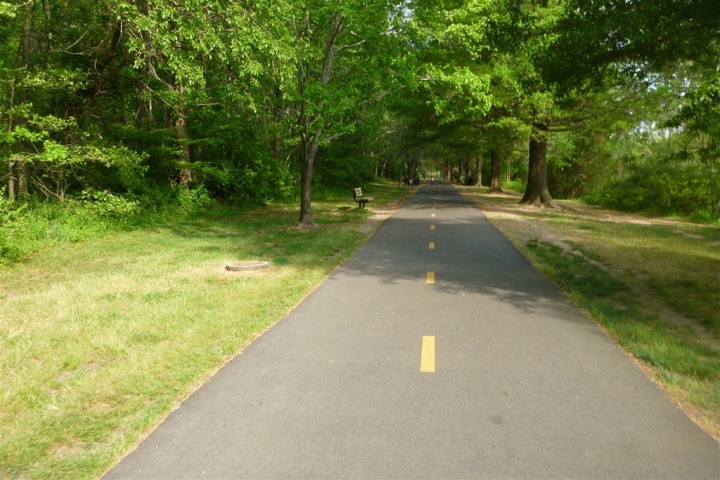 I selected this route in an attempt to stay in the shade – and while it was definitely better than the open sun, it was still a wee bit warm.  It’s funny to see how much of a difference it is between running at the same temperature in DC versus in Vegas.  DC’s humidity really does make it a fair bit more difficult, even more so when you consider in Vegas I had zero shade. 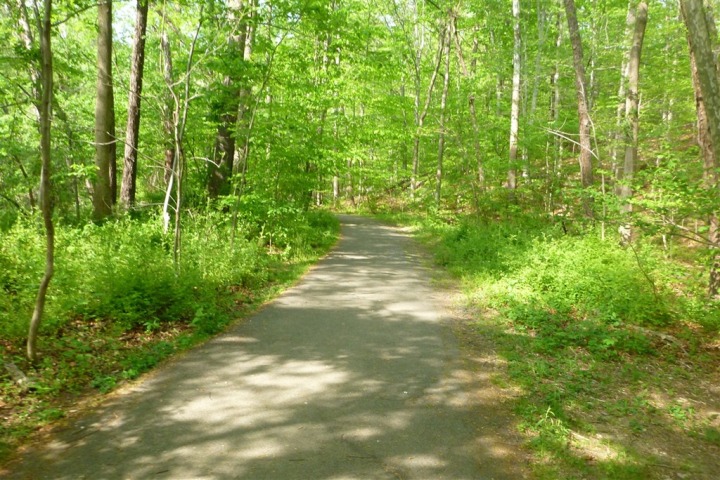 Overall, I kept it at a long-run pace – a bit slower than normal today, but still mid-7:30’s – and just ran along the river. 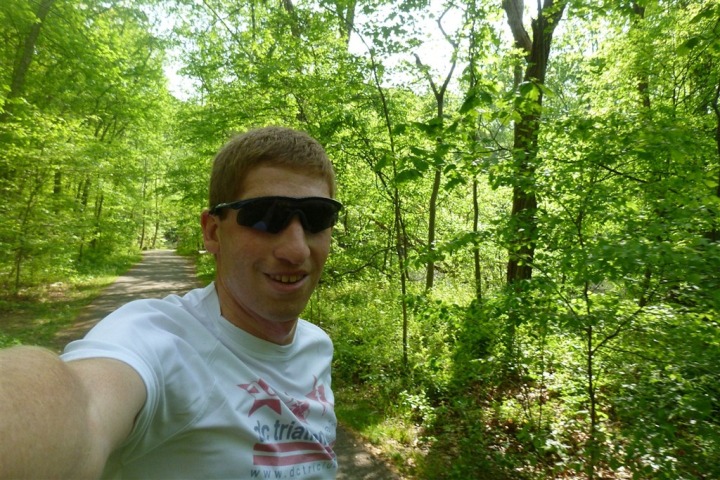 After the run, the remainder of Saturday evening was spent hanging out in Clarendon – enjoying some time with friends.  Yes, The Girl and I were both wearing yellow.  The general theme as brightness/neon. 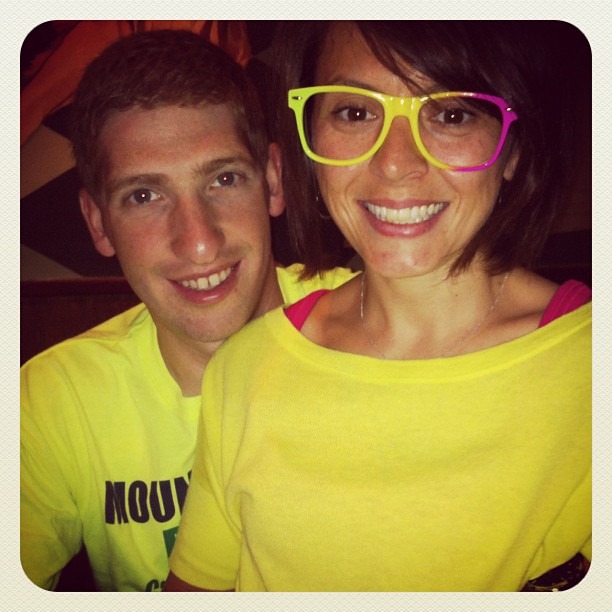 Early Saturday morning I got up to watch The Girl play soccer.  It was raining and cold, and generally speaking, a miserable morning to play or watch soccer.  The only thing going for it was that there was no wind. 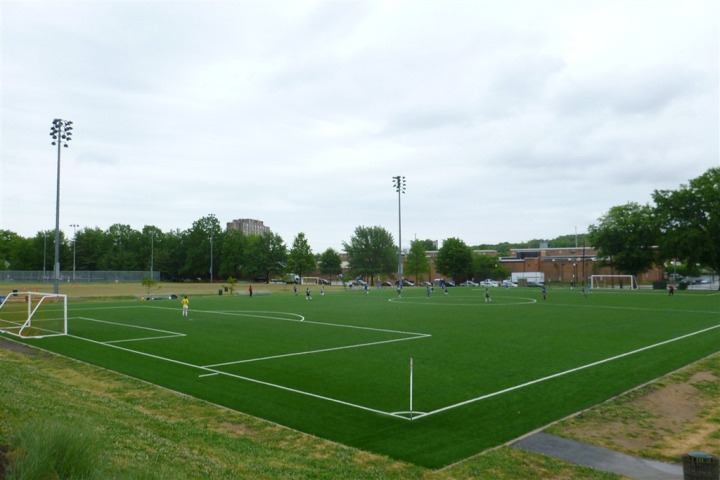 Since the weather didn’t change later on by the afternoon, I decided against going outside for my ride.  Mostly because I didn’t want to have to clean the bike afterwards.  Yes, I’m kinda lazy like that.

So instead, I setup for a 1hr 45m trainer ride.  The positive side to this though would be that I could continue doing tests between the Polar/Look Keo Power Meter pedals, and the SRAM Quarq Cinqo RED 2012 setup.  The Quarq guys let me hang onto the bike for a few weeks further to be able to do these tests.  Of course, I could do that easily outdoors – but comparing it against the CompuTrainer is best done indoors. 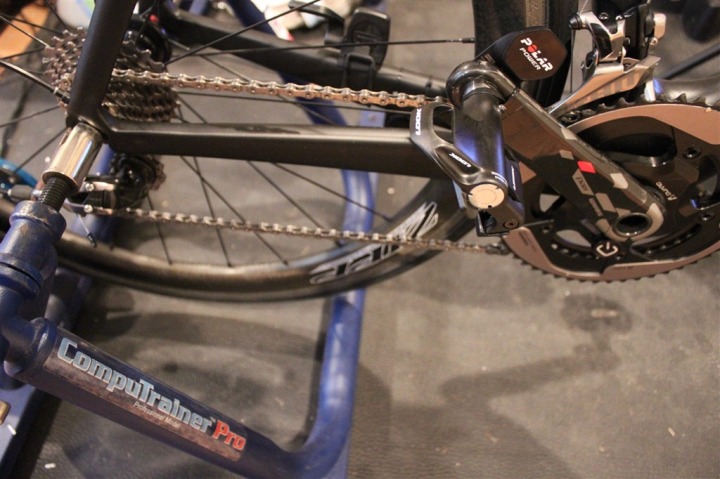 So why the CompuTrainer over the Tacx or PowerBeam Pro for this test?  Well, two reasons.  First, is that the CompuTrainer integrates with TrainerRoad – which in and of itself doesn’t really matter, but it makes it really easy to get my data afterwards.  This means that I simply close the workout and grab the .TCX file from online later.  When I’m doing comparative tests like this – the easiest path to data often wins. 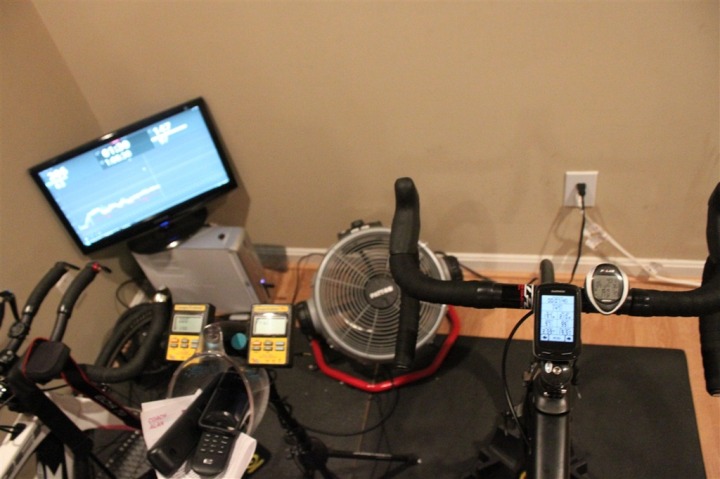 Secondly, it’s quicker and cleaner to calibrate than the other units.

The last time I rode with both (pre-Vegas), I found the two power meters nearly identical – within 3w over the course of a 70-minute workout.  Pretty impressive.

So this time, with a little longer workout I was interested in seeing how things would shake out.  Further, this particular workout had some one-legged drills in it.  These were done for about 30s per leg, alternating back and forth.

If you look at the below Polar unit you’ll see the two data feeds mid-line showing Left/Right power.  That’s on the right of the middle line where it says ‘0’ on one side, and ‘100’ on the right side.  That’s a case where I was pedaling purely with my right leg (my left leg was detached from the pedal and resting on the back of the CompuTrainer stand). 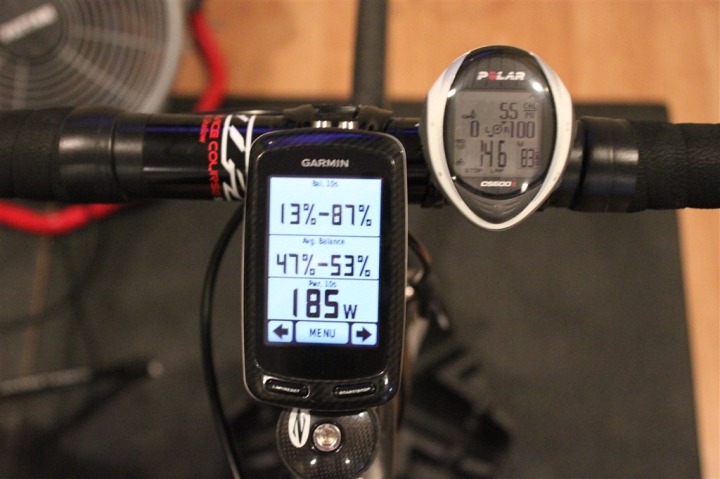 On the Edge 800, they use PowerBalance – also represented as Left/Right.  However, remember that in the case of the Cinqo’s PowerBalance it’s not showing Left/Right but rather the stroke split up (one-side) – which is typically from about 12PM till 6PM on a clock of your crank.  In the case of normal riding – I’m actually pretty close (that 47/53 is my overall balance for the entire ride).  But that top number (13/87) is when I went to right-leg, it’s showing the preceding 10s average.  It’s not showing 0/100 because I’m still pulling up a bit – though not very much.  When I focused on pulling up, I could get the number closer to about 40/60.  But as soon as I stopped focusing, it would slip back.  Of course, on the Polar unit, it showed 0/100 the entire time, since it was measuring power at two different pedals, rather than the Quarq just measuring it on one side.

I started looking at the two files within WKO side-by-side, but then my laptop started crashing – so I gave up on that for now.  I did note pre-crash that unlike my ride before Vegas, this time the two were definitely further apart (on the order of 15-20w).  My calibration procedures were the same both times, so I’m a bit surprised there.  But, that’s why I do longer review period – to be able to shake things out over time.

[Update] By time I got to work in the morning, my coach had already looked at the data from both PM’s, read my post, and shot me the below.  Looks like it wasn’t as bad as I thought (and yes, it’s totally awesome he does this – which was all manually done in Excel): 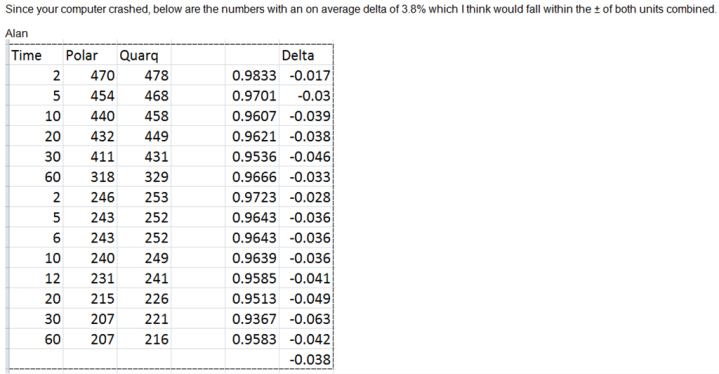 In other unrelated news – I unboxed the Nike+ Fuel on Sunday.  I didn’t do it until later in the afternoon, so I didn’t get a chance to get a full days worth of data into it yet.  But it is fairly cool. 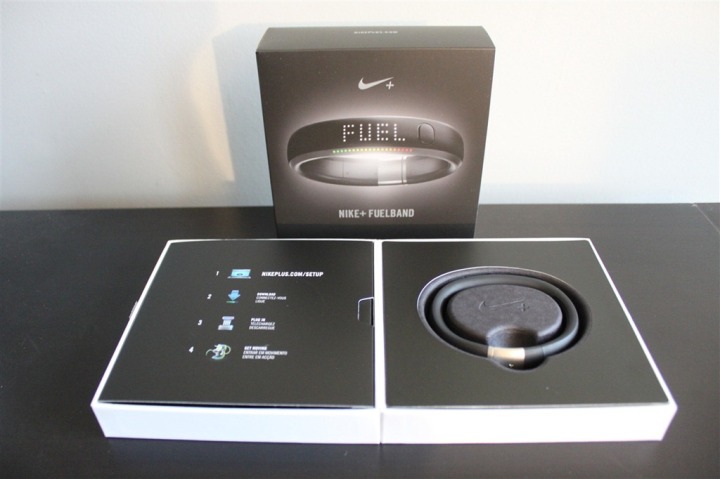 I had actually spent the previous 7 days wearing the Jawbone UP, again.  I had wore it a bunch when it first came out, but then stopped for a while.  For fun, I wore them both for the remaining of the evening, to see how they compared for a few hours. 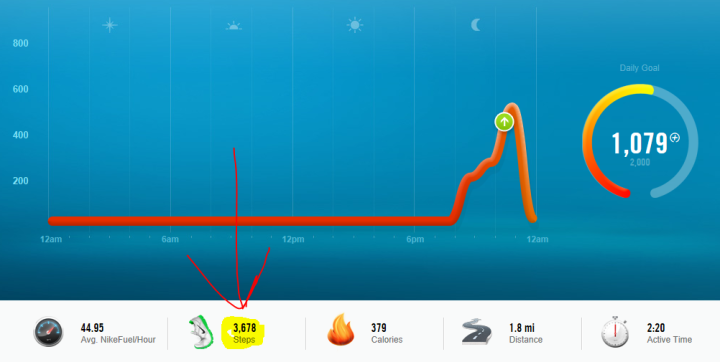 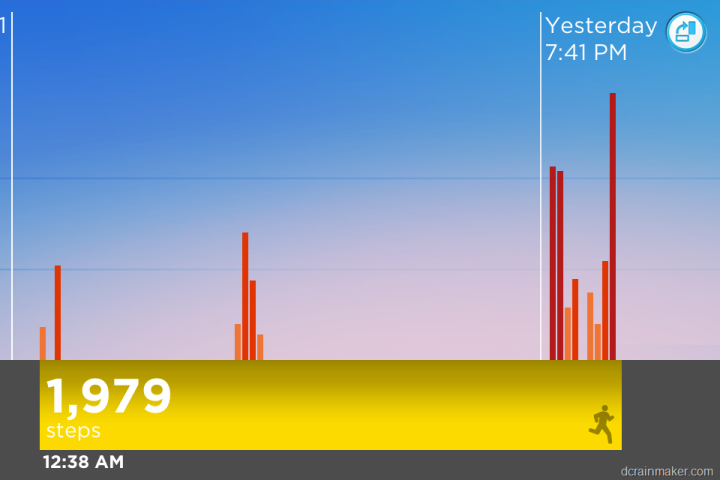 (For those curious, those brief spurts of steps mid-day chart above were actually the photos being taken of the two units, surprising to see such a jump.  The Fuel wasn’t yet on then.)

If nothing else, I’m happy to report that the clip system on the Fuel is FAR better than the @*#$(@# cover on the Jawbone UP.  I lost yet another one of them in Vegas.  Thankfully, I bought a three pack of replacements back a while ago.  If you look at the Jawbone picture two photos down, the cover is the small metal piece.  It falls off constantly, horribly designed. 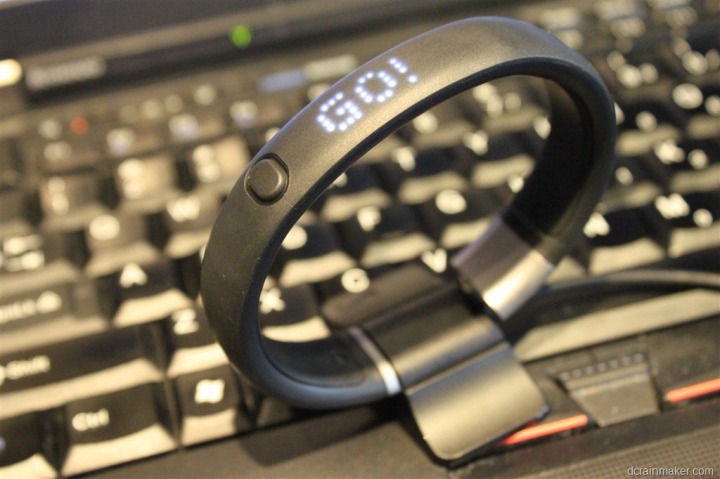 I’ve long since used a FitBit off and on while travelling, though I haven’t in a while.  I’m looking to put together some sort of shoot-out after I knock out some reviews on them.  Here’s the three altogether: 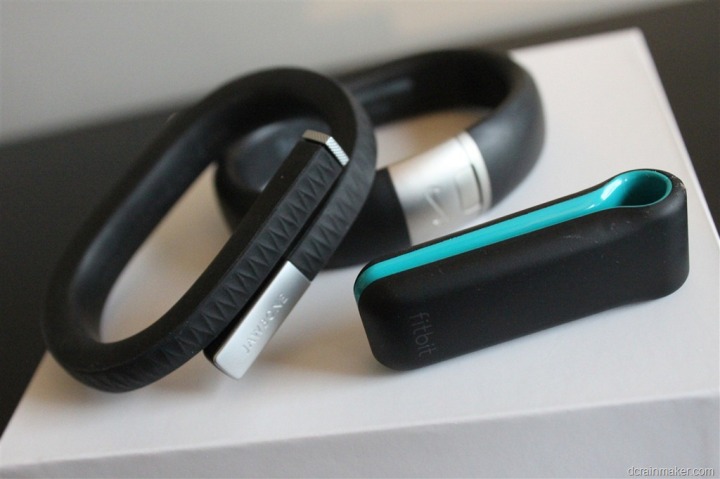 Note that I’m also looking at adding the BodyBug into the mix, after some suggestions on Facebook – as well as perhaps the Slimcoach.  The goal here is for devices that help with keeping folks healthy (not necessarily endurance sports folks), but can be worn to work to track steps.  Meaning, they can’t look like a Garmin FR910XT on your wrist.  Sound good?

And finally – I’ve now got my weekend long runs converted into long-trail runs.  Starting this Saturday I’ll be enjoying one of the areas more popular trail runs (Fountainhead).  As such, I need to sort out picking up some trail running shoes.  Ideally, I’m looking for something with a bit more stability.  Got suggestions? Add them to the list below.  Run-distance wise, I’d expect it to be between 10-20 miles, so nothing in the ultra range.