This past weekend was nice and relaxing.  Just a few big ticket items – but largely just a lot of lounging around, enjoying the couch.  Silly I know, but everything is always go-go-go, so it’s nice to simply just enjoy hanging out watching mindless TV and movies on Netflix.

But, before I got to the relaxing – there were a few workouts to take care of.

First up was a Friday night ride.  I decided to unbox the Kurt Kinetic Road Machine trainer that I bought a few weeks ago, with the intent of trying out some of TrainerRoad’s features.  Now, you don’t need this trainer to use TrainerRoad – in fact, they support a gazillion trainers (cheaper ones too).  But this was the one they recommend as the best bang for the buck and overall experience.  In addition, all of the trainers I have are fairly high end, and I wanted a bit of a less expensive option that took advantage of what TrainerRoad has to offer. 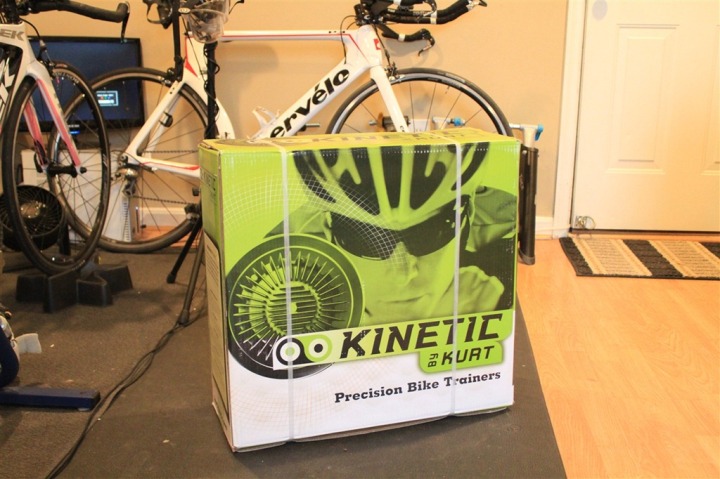 So I got it all unboxed and built, which thankfully only took a few minutes.  I’m beginning to find that the newer the trainer – the better the unboxing experience is.  It sounds kinda obvious, but companies have made some advancements in making these trainers much easier to setup than ones of yesteryear. 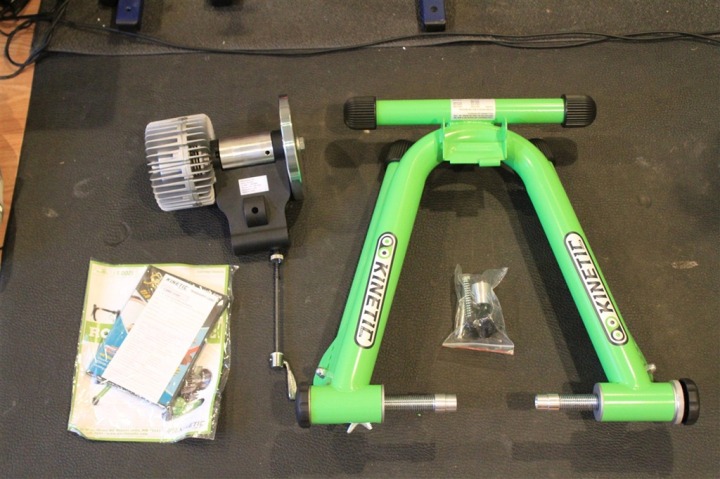 Not too long later I had everything setup.  I didn’t/don’t have a fancy laptop stand, so I just used the trainer box.  Now normally I would use that computer to the left there, but I had already configured everything on the laptop instead – so I just used that this time.  From there I printed off the IT workout my coach had created, and got to work. 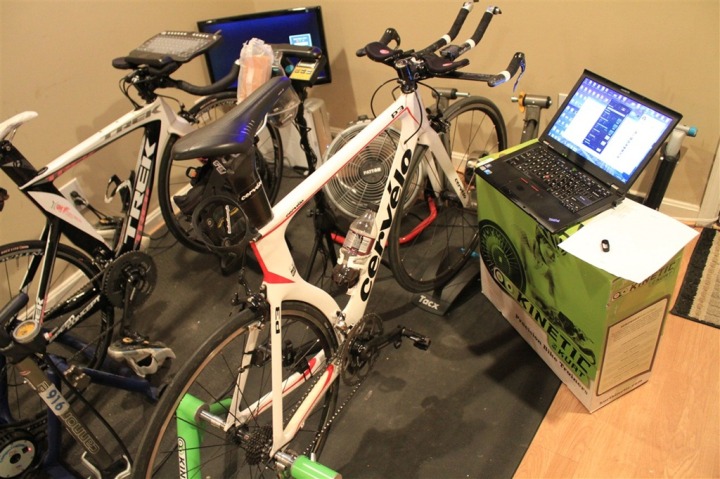 TrainerRoad does a bunch of things – but one of the biggest selling points is the concept of ‘Virtual Power’, which uses known power curves of trainers (including ones that don’t have any electronics in them) to predict power at a given speed.  Many more expensive trainers that transmit power work on the same basic concept.

While I had intended on actually doing a comparison between the VirtualPower and the Quarq direct-force power meter, that went somewhat off the rails when I neglected to actually remember the Garmin to record said power meter.  So this time I only got the VirtualPower.  Next time I’ll also have the Quarq power and can start making some comparisons and talk about the differences there. 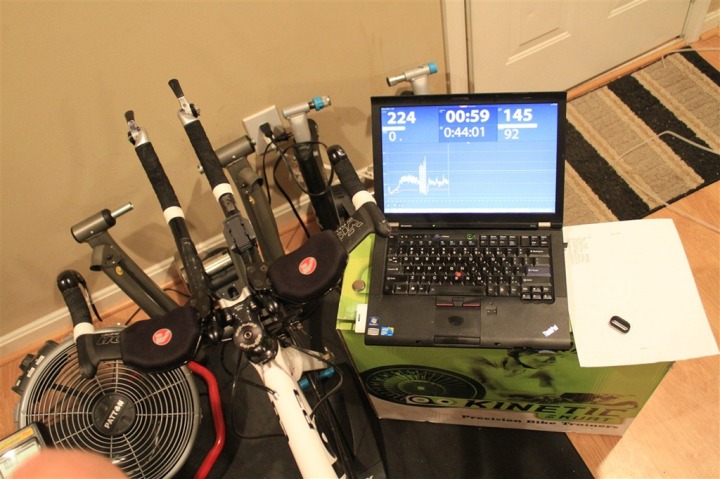 From a trainer standpoint, the Kurt Kinetic felt like…well…just about every other trainer.  I know, some trainers do indeed feel different – but honestly, this one really just felt like every other trainer.  You’ll note that there isn’t any resistance control – that’s just done via changing gears and your speed.

When I was all done I had the following output: 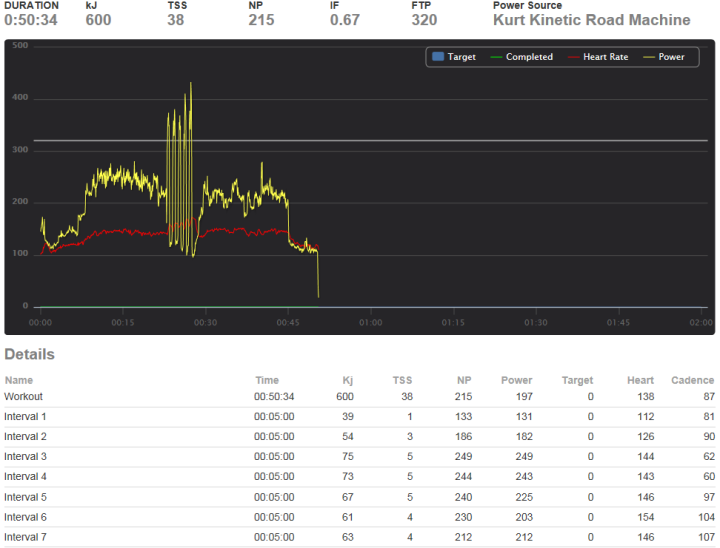 Now normally you’d have filled the entire graph up.  But since I had incorrectly selected a 2hr ride, my 50 minutes of time only took up about half of the graph.  Live and learn.  You’ll note the power output listed, as well as my heart-rate and cadence – all collected via ANT+.

Later on during the weekend I would get The Girl’s bike all setup to use TrainerRoad as well, including setting it up to use and control the CompuTrainer. 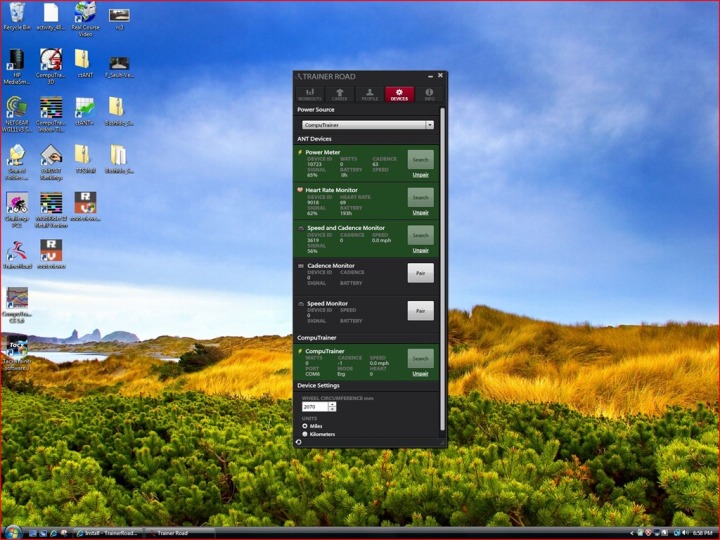 Yup – you heard that right – it can straight-up control the CompuTrainer, and record your data from it.  And combine all your favorite ANT+ accessories from your bike, with it.  And then upload the data automatically to a .TCX downloadable file (same as what Garmin units do).  Sweetness!

Check it out above in that screenshot, I’ve paired her ANT+ Quarq Cinqo Power Meter, with her Garmin ANT+ heart rate strap, and her Bontrager Duotrap ANT+ speed/cadence sensor…then tied it with her CompuTrainer. 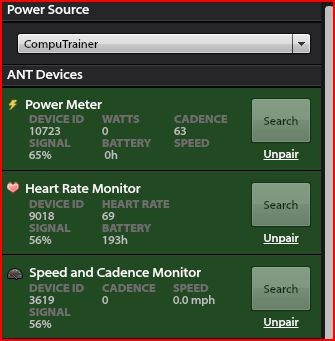 Now, the second big thing on TrainerRoad is the workouts they offer (tons of them, all free), and stuff like Sufferfest integration.  The Girl will be trying some of that out tomorrow during her workout, and I’ll check it out as well over the next little bit.

I didn’t know exactly when I’d run Saturday – but I’m glad that running friend (and groomsman) Rob texted me to run when he did.  Because had we not run then, it would have crapped all over us mid-run later. 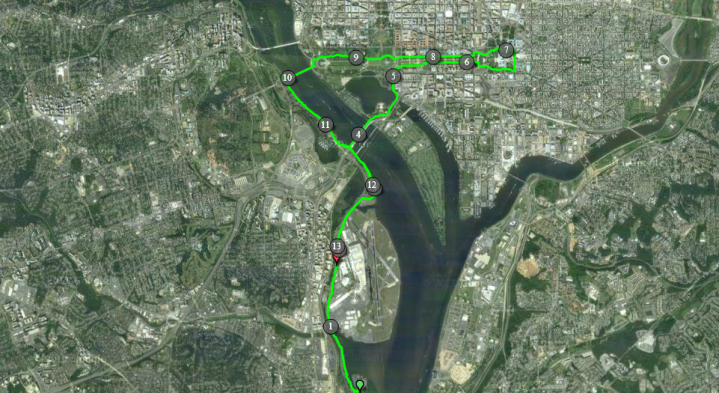 Our run took us past all the major monuments, memorials and big-ass important buildings (i.e., the Capitol).  And, it also took us past the endless construction that’s taking place on the Mall as they make it pretty.  Though, like my Mom always said when I was a kit about cleaning my room – it’s gonna get messier before it gets better.

Overall the run ended up actually being about 15 miles, due to a minor miscalculation on my part on the length between two points of the route.  No worries, I just ended up doing about a two mile cool-down (on a separate file).

During the run I wore a slightly different Biovest than last week.  This time I wore both the white one, and it was one size larger.  As you may remember, this is a fully integrated HR strap into the clothing – thus, I wore no separate heart rate strap.

It worked just as well as last week (after all, color doesn’t matter much) – and I found that the slightly more comfy one didn’t have any impact on the units ability to measure my heart rate.  Note that the below photo doesn’t include the fleece I wore over it, after all, it was in the 30’s! 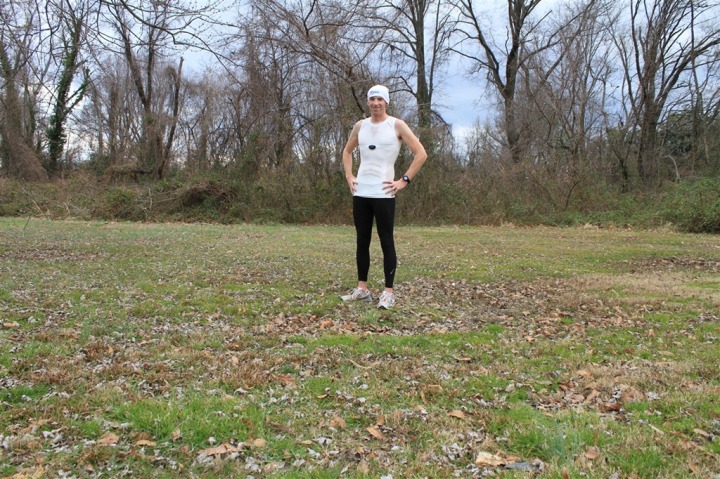 Also, since last week the folks got their store all setup, and because I’m the only one with half-way decent photos of the unit, they asked to use my photos (as long as folks ask first, I’m friendly like that).  Since my photo is now being used for the marketing of clothing gear – that officially makes me a model.  Like, a fashion model.  Top Model caliber.  Except, well, unpaid.  But never mind that – I’m still gonna make it big in the model business!

Ok, back to the run.

As I finished and got into my car I noticed the sky looking pretty messy. 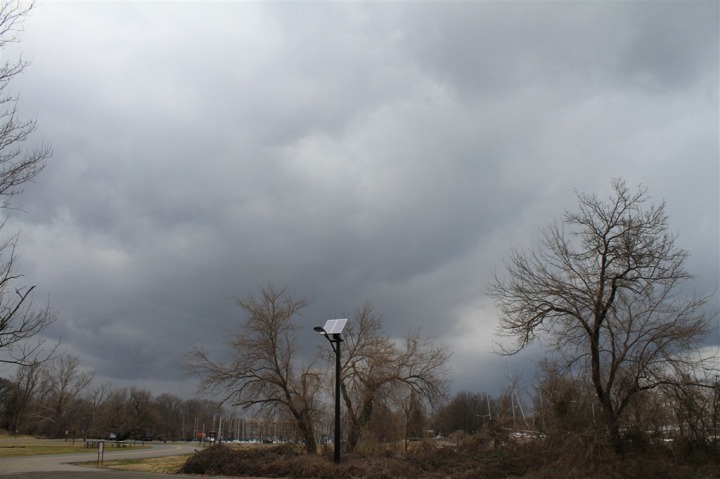 And no doubt, about 10 minutes later on my drive home all heck broke loose.  It was as if a tornado and a snowstorm somehow combined.  I’m reasonably sure that in addition to random boxes flying across the street, I also saw Dorthy’s dog from the Wizard of Oz fly across as well.  Pretty crazy.

In order to fully recover from my run – we decided that some sushi was in order.  We’ve been trying to find the right balance of the amount of sushi that we can consume without hurting ourselves, we cut down the regular order a bit.  Though, it was still impressive: 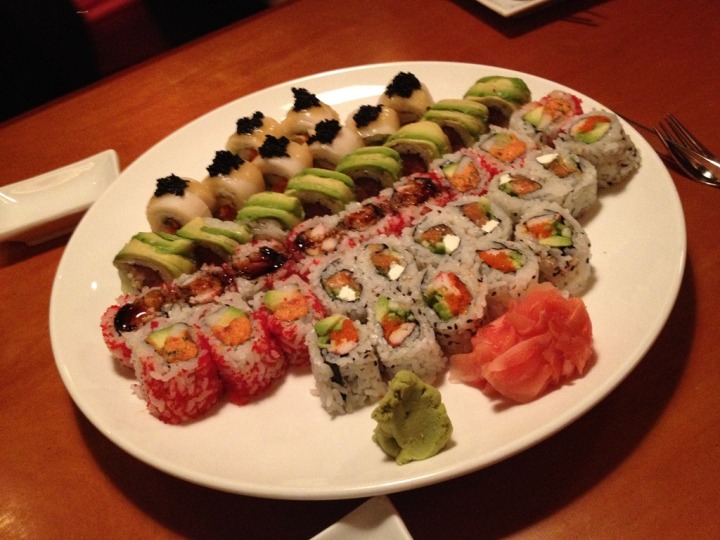 Next up – I spent some time on Sunday updating some of the Garmin FR910XT In-Depth Review sections with items that I had received over the last month.  For example, the FR910XT quick release kit, extender strap, and fabric strap.  All of which I had ordered way back in October and finally came in back in early January.  Wait, you didn’t know they had brought back the fabric strap?  Yup, the FR305 glory days are back. 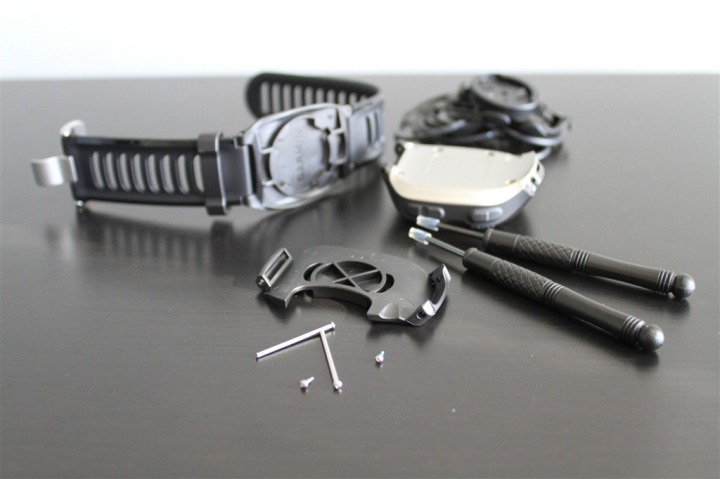 So, you can swing on over to that review to check out all the details there.  I must say, I’m reasonably certain that the quick release breakage issues of the past are likely gone with the FR910XT quick release kit.  It’s a beast in terms of strength.  Though, also a bit of a pain in the butt to install the first time (you have to use two screwdrivers at once, like rubbing your stomach and patting your head in opposite directions), but once you get it all installed – you’re good to go!  I’m still working on re-consolidating all my indoor/outdoor FR910XT swimming posts into the main review…just knocking one thing at a time off the ole totem pole.

Speaking of updating and posts and blogging – I spent a bit of time helping out The Girl with her new blog template and total redesign.  But, I’m really proud of her because she worked really hard over the last little while figuring virtually everything out by herself.  She’s become pretty good at sifting through Javascript, HTML, and CSS.  A little web developer in the making.  Go check it out!

Oh – and finally – to prove I do have some Tim the Toolman Taylor in me, I replaced our garbage disposal.  The older one was having some issues, so now we’re back up to full speed with obliterating the crap out of stuff.  And yes, that’s a bike wrench – it was just the closest thing to me with a phillips blade.  Good times! 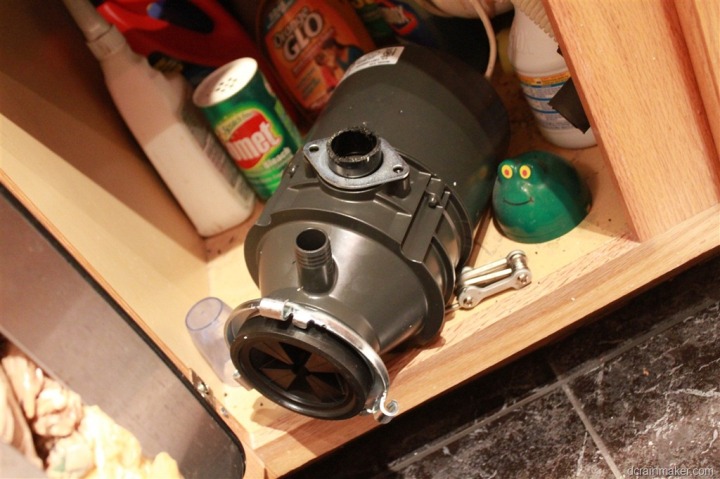 So with that – have a great week ahead!  And thanks for reading!