Friday Photo of the Day

I had planned to post a Tip of the Day today (though I hadn’t yet decided which of the three different ones I wrote up I’d end up posting).  But then I got some of the official photos back from the ANT+ Symposium that I spoke at a few weeks back.  And as I was sifting through one of them…I stumbled into this: 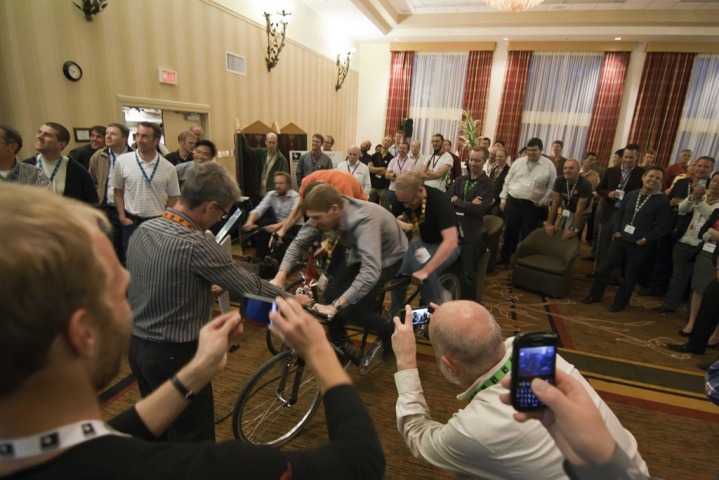 Which…requires a a bit of explanation.

Ok, probably a lot of explanation.

I had no intention on getting on such a contraption when I arrived that evening.  Yet somehow through a very unclear process of elimination, both myself and my riding partner were selected without much regard to our previous evening plans.  Before we knew it we were mounting the tandem, ensure of how exactly this would all go down.

Behind me pulling up the rear of our team cycling experience is an engineer from Quarq (oddly appropriate).  To our immediate right on the solo bike in the orange shirt is the head of Wahoo Fitness.  And over on the rowing machine we’ve got one more competitor. Pour guy, nobody saw that one coming.

We’re all competing against each other in a 30-45 second blitz for our lives.  Each of the three units is connected via ANT+ to a laptop with a custom racing program that’s broadcasting everything up onto a big screen.  Each of the three sports was equalized so that they roughly required equal (painful)efforts.  And by equal, we mean that on the tandem bike we had to put out and hold 1000w to be competitive.

On a jiggly bike.

A jiggly bike on a trainer that really wasn’t designed to operate at such thresholds in a group environment.  A group that may well have been drinking.  Heavily.  Let’s be honest, it was in Canada after all.

But we did successfully operate it (complete with dinging the bunny bell during our effort), and we prevailed.

Well, actually, we’re not entirely sure if we prevailed.  Apparently our cycling effort was so gargantuan that we apparently managed to somehow break the trainers ability to measure wattage.  Which meant that our little tandem bike didn’t move very far across the screen.  Ok, it didn’t really move at all actually. But, we still (believe we) won.

That’s our official side of the story anyway.  And we’re sticking to it.

(Oh, as a quick side note – thanks for all the great comments regarding the ANT+ presentation and YouTube video of it I posted – almost 2,000 of you have watched the 40+ minute session.  Amazing!)