A split-brain week (and weekend)

Last week was exhausting. Some days there were 2 hours of sleep, and some days…well…I collapsed into a lot more sleep. It was a see-saw of craziness.  Mixed in with all the walking (err…sprinting) across the show floor was also my regular workouts, though luckily all run based.

I’ll highlight Tuesday’s track workout of 400’s, merely for one reason: It should have been relabeled a swim.

In the dozen plus times I’ve been to Vegas, I don’t believe I’ve ever seen it rain.  Maybe it was luck, maybe statistics, but it’s just almost always been dry.  Either way, that streak of mine ended in glorious fashion.

Starting with my track workout where it poured, dumped, thundered, lightening, and everything else one could think of (ok, I suppose small baby penguins didn’t fall from the sky).  Apparently the folks who designed the UNLV track did not consider rain a possibility, as there is only one drainage drain outlet per 100m.  Thus, the inside lane of the track was under a few inches of water and the 2nd lane not too much better.  Here’s a look at what it looked like as we were finishing up: 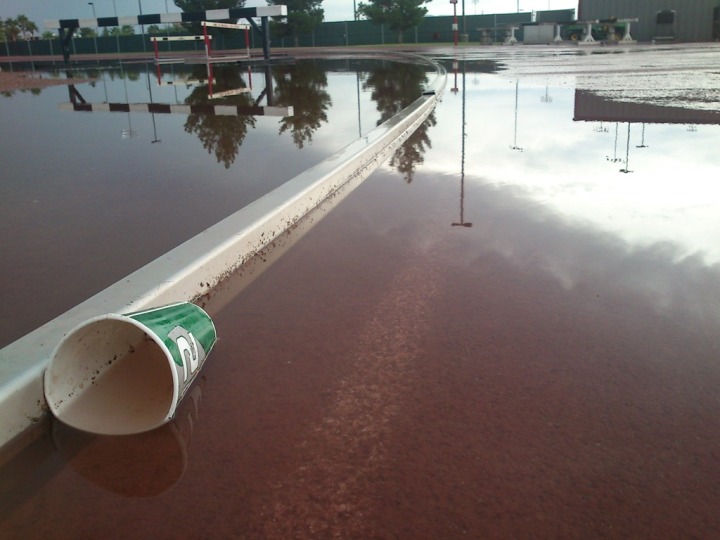 Though with the 400’s set for a given split (1:21), I had to go a bit harder to make them work in the 2nd lane given it was 8 extra meters. Btw, you can lookup track lengths by lane here.  Luckily the cool weather made that relatively easy.  Also of interest is that the straightaways here were close to about 85-90m whereas the curves were about 110-115m.  Sorta lopsided, through me for a loop the first few laps when I couldn’t figure out why my straightaways were always 2-3 seconds fast and my curves the same short.

(Side note: I’m really excited about TrainingPeaks switching over to Google Maps a few weeks ago from stanky Mapquest that they had previously. So much better, especially for international coverage.)

At any rate…for a track location – it’s actually one of my favorites.  It’s located just a handful of blocks behind the strip and is virtually always left open.  And even if it’s not open, you can run around the UNLV campus very easily – which we did on Thursday during our mile repeats.  We mixed in some track time in there as well, but we wanted to change things up a bit. 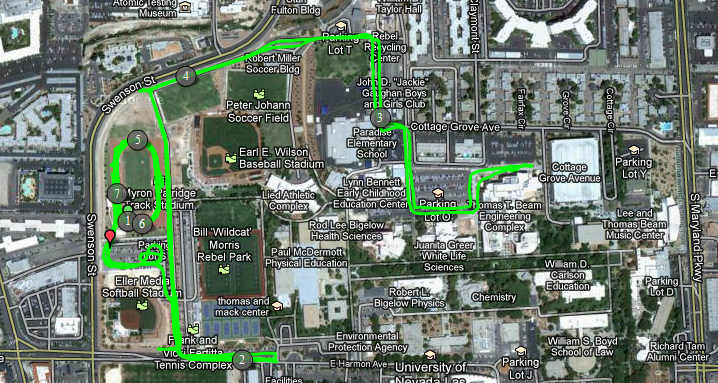 Let’s move onto the weekend though.

Turned out that getting home was a bit more challenging than we expected.  Despite having flown through Denver airport by myself more times than I can count (probably 40-60+), I don’t remember ever having significant delays.  Yet the last three times I’ve flown with The Girl, via Denver, we’ve been significantly delayed.  This time was no exception.  Our plane broke out near the runway and we ultimately had to get a new one.

On the bright side, I did get to see the cool retro-painted United plane, which was voted on by United employees.  It was fun watching all the airport workers snapping cell phone pictures in the gate area. 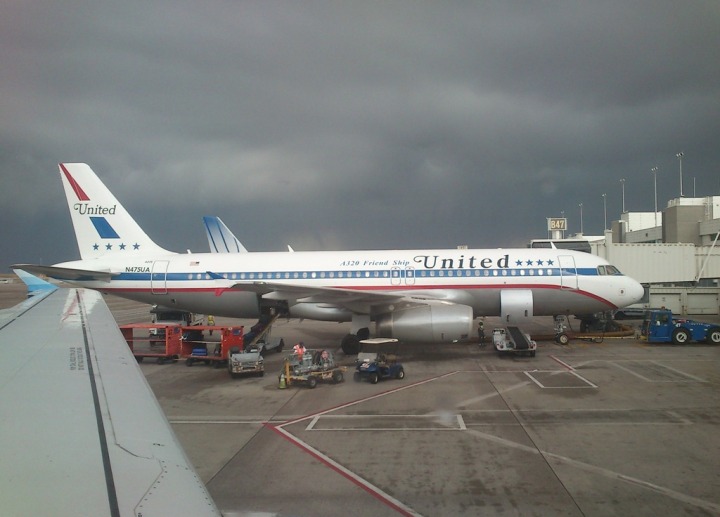 With a significant delay getting home Saturday was pretty much lost – so my long run was moved to Sunday instead.

This week was an easy week, primarily due to Interbike, so my long run was only 1:30 in total.  But with the cooler weather, I was rockin’ it.  The first 1:15 was at a Z2 easy-pace, and I basically nailed 7-flat, whereas the last 15 minutes was at a slightly elevated pace and was happy to be about 6:40.  Good times!

Of random interest was that as I started off I heard what sounded (and felt) like a rock in my shoe.  But of course like probably everyone else, I didn’t feel like stopping and checking it out.  I figured it would eventually fall out.

But I had forgotten about it until afterwards, when I went to take a quick shoe self-portrait running..and low and behold, what do I catch in the photo? 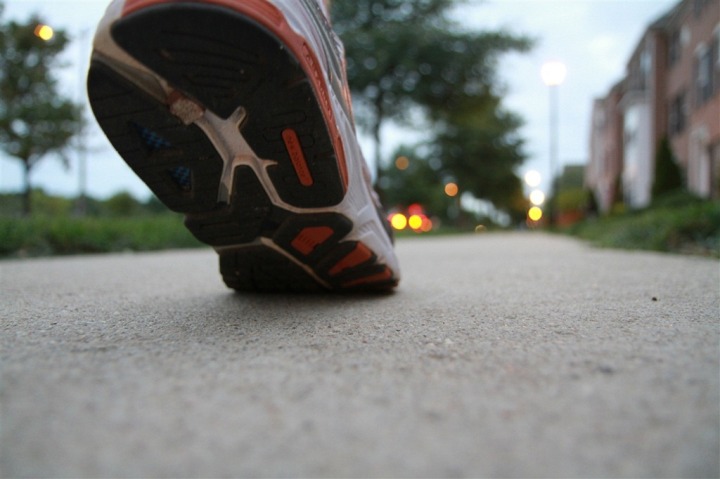 I placed him in the “garden”, after all, he travelled 13 miles with me – and in fact, probably came all the way from Vegas during one of my runs there.

With that, have a great week ahead everyone!  I’ve got the remainder of the Interbike posts automatically set to publish at various times over the next few days.  Still tons of good stuff – starting with tomorrow and the “Everything you ever wanted to know about the Polar/Look Keo power meter” post.