This weekend was a bit of a whirlwind – despite being one that in theory shouldn’t have been.  With getting stuck working rather late downtown on Friday night, before I knew it, it was Saturday morning and time to head out on my long ride for the week.

This week the numbers got bumped up once again, up to 3:00h for the first portion, and then two 15-20 minute TT’s that followed. 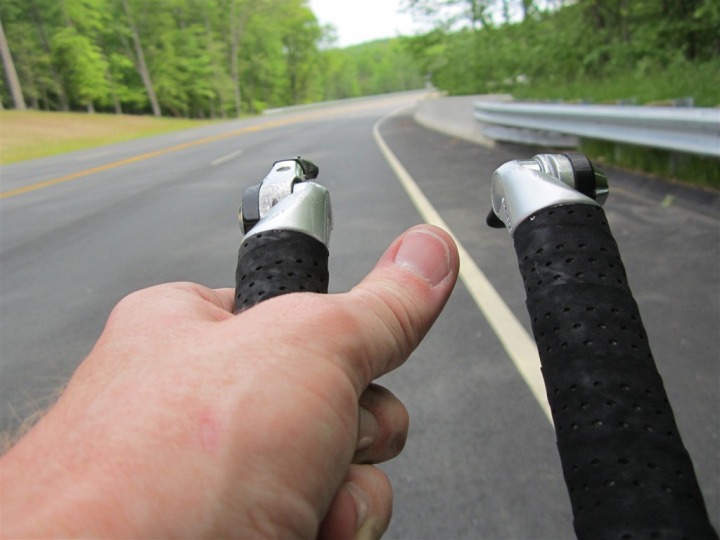 I was very happy with the first 3:00h, as I managed to average 20MPH on the dot.  Literally the second it went from 2:59:59 to 3:00:00 the odometer rolled over to 60.00.  Sweet!  I know that I should be more looking at power (and I was), but there’s just something satisfying about having it be the magical 20MPH+ on a training ride in the semi-easy ‘Z2’ zone.  Sets up well for longer distances races coming up on the calendar.

Along the way I also wore the Polar RCX5 as I near a product review on that.  Despite installing the speed sensor the night prior, I ended up using the GPS pod to determine distance – since I figured that’d be more interesting to everyone as far as accuracy goes. 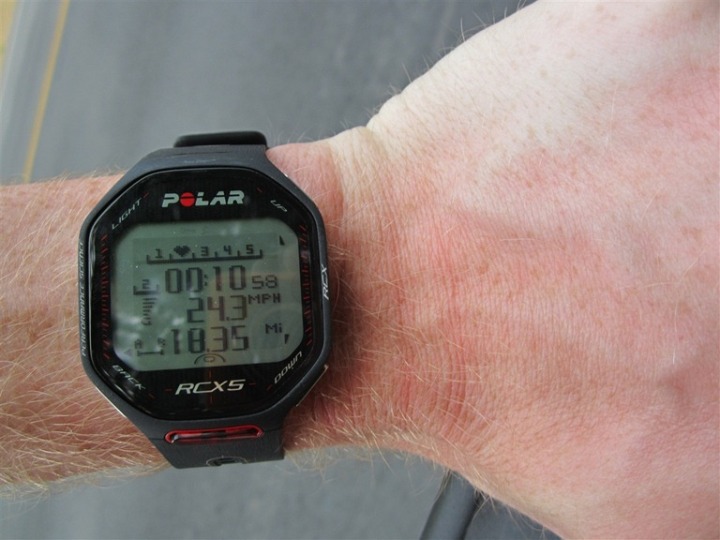 I was pretty amazed that when all was said and done some 3:45h later, the Edge 800 and Polar RCX5 only disagreed by 4/10ths of a mile.  Some of that was probably due to occasional stop mis-timings on my part – but even if you exclude my error, that’s pretty impressive over the course of a 75ish mile ride.

I’ll need to finagle with the speed/cadence sensors a bit more early this week, as I had them setup and then they got bumped.  I had very carefully arranged them to have both the ANT+ sensors and Polar sensors on at once, but I think my design was overly complicated and I just need to re-arrange them differently.  No biggie, I suppose that’s why I’m an engineer.

Post-ride I had a 30 minute run to do.  During the higher intensity portions (the parts that counted) I was mid-6’s, so that’s also setting things up well.  By time I was done I was pretty shot, with over 4hrs in the books.  But I believe some of that was simply that I took in too few calories and was probably a bit dehydrated.  Over the next few weeks as the weather turns from cold to hot (it was in the middle on Saturday at about 70*F), I’ve gotta keep in mind to kick up hydration to keep going strong.

After the run…there was pretty much only one thing on ours minds: 7-11 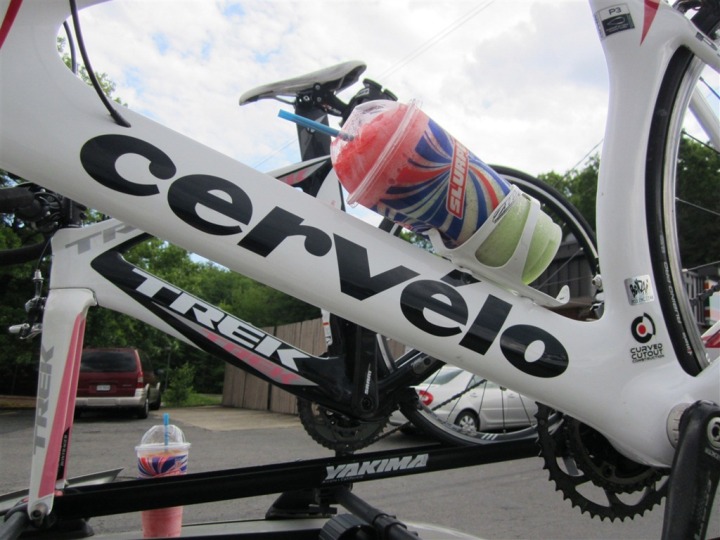 (Actually, we really love the Starbucks Mocha Lite Frappuccino, as it only has 140cal for a Grande…yet tastes like chocolate amazingness.  Regrettably, there wasn’t any Starbucks anywhere near our ride location.

Sunday was a mix of hanging out and wedding planning.  Oh, and sleep.  Lots and lots of sleep.  The wedding planning included the now-weekly validation of tasks on the ever-growing Excel spreadsheet of things to do.  I feel that we end up adding more tasks each week than crossing off.  I’m hopeful that at some point we’ll start sliding the other way.  Though, we did technically nail down all the timings for the ceremony/reception – so that’s a solid achievement.

More importantly to keeping our Coach happy though was the Sunday long swim.  We knocked this out just before the closing bell at the pool.  Leaving me exactly 8 minutes to get all my swim/underwater related pictures in for the RCX5 review.

See, unlike the Garmin’s (which use ANT+ to communicate), the RCX5 actually reads your heart rate in the water via the Polar Hybrid strap.  So for some it can be a useful training or data gathering tool there, plus it even includes a nifty ‘Swimming’ mode, complete with a swimmer graphic: 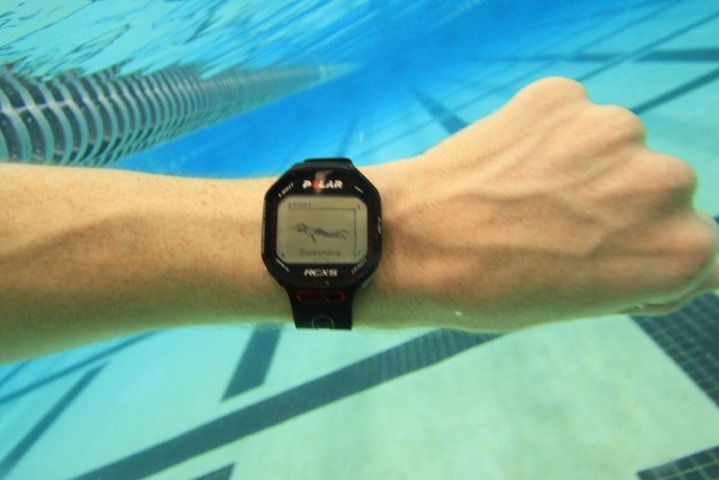 The only challenge I tend to have is that no matter how tightly I put on the HR strap, or which way I orient it (front or back), it just slides off me due to the water pressure on a flip turn.  For The Girl, it’s fine, as it’s under her swim suit so it doesn’t go anywhere.  But for a guy, or at least me, before a lap or two it’s down around my waist like a belt.

Nonetheless, if you don’t have any slippage problems, then it will indeed display and record heart rate, as you can see on the top line in the photo below. 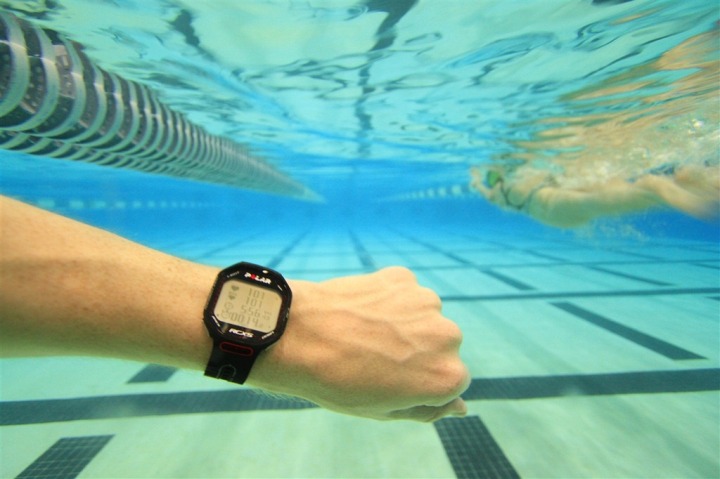 Also of note is that unlike most watches, the lap/split time on the RCX5 is super-easy to read during a set/flip by just barely tilting your wrist.  The screen has no weird reflections – which is great! 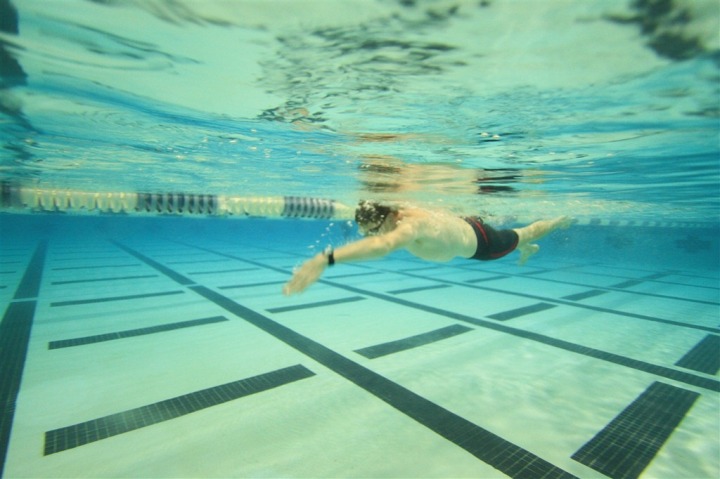 (For the record, yes Coach, I know, not enough core rotation)

With the swim complete, it was back home to talk to my parents (Mothers Day after all!) and then more wedding related goodness.  It’s coming up soon…less than two months away!

As far as other things that are soon, I’m hoping to get the RCX5 review out sometime this week – though that will depend heavily on getting access for my RCX5 beta unit to be able to talk to their new website.  At the moment that’s scheduled for tomorrow, so we’ll see.  No worries though, if that doesn’t quite come through in time for this week I’ll be sure to still have lots of goodness for you in other forms!

Thanks for reading all, and have a great week!

Oh…P.S.!  If you didn’t get a chance to see the ‘Week in Review’ post yesterday, then at the very least check out two items of note.  1) An amazing story from a friend of mine about her working her butt off to make the cut to be a F-15 fighter pilot while also making the A standard for the 2012 Olympic Trials…and then 2) An incredible YouTube video, also about a female runner, who will just blow you away.

P.P.S: Ok, one more thing.  Thanks to everyone who’s commented on wanting wireless ANT+ transfers for the Edge series of cycling devices, particularly to be able to sync w/o a computer to a cell phone.  Glad that’s something at least 50+ of you are interested in!