ZEO, Fitbit and other tidbits

First off – sorry for the slight silence the last few days.  I’ve been fighting a cough for the last three weeks, and it seemed to be winning the war over the last few days.  Between the 12-14 hour workdays and travel this week – I’ve just been exhausted with no energy left to put together posts.  Sorry!

On the bright side, after hanging out at the urgent care center Wednesday night for an extended period of time (how on earth it took 3 hours is beyond me!)…I’m feeling a bit better now.

One thing that probably helped today was getting a fair bit of sleep last night…finally without coughing – like I’m going to die – all night long (thank you drugs!). And while I was sleeping, Mr. ZEO was watching me sleep. Well, watching my brain sleep anyway.

What’s ZEO you ask? Well around these parts it’s dubbed the Sleep Machine – given the nature of what it does. The unit monitors brain activity to evaluate your sleep and quality of sleep.  It has two piece – the little bedside stand/clock, and a wireless headband. There’s a great little video from the team doctor of RadioShack discussing it in more detail at the Kona Power Meter seminar.

The company sent me over ZEO to check out.  So far I haven’t dug into the full breadth of what it’s capable of – merely because I’ve been travelling so much and didn’t take it with me overseas.  But now that it’s in my suitcase (how else am I going to review products when I’m travelling 95% of November-December?), I’m starting to get better at it.  And the website has tons of ways to dig into the data too.  Once I get a big enough cache of data I’ll be able to get a full review together. 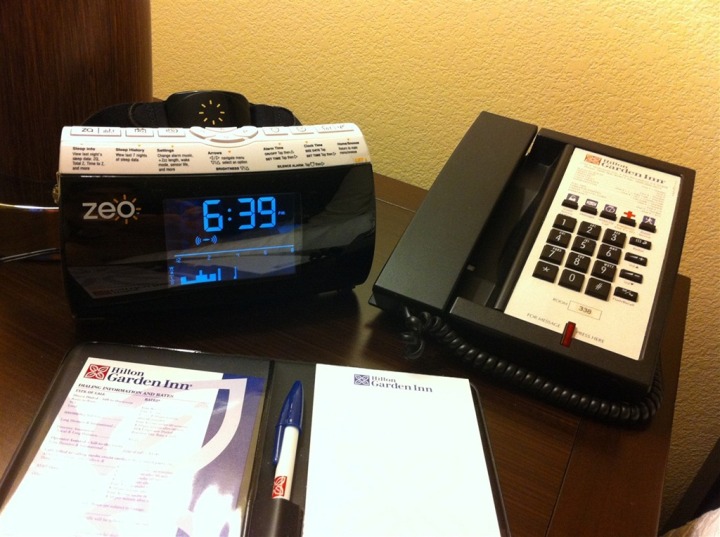 Speaking of health related items – I’ve been using Fitbit pretty consistently while travelling the last few weeks.  Sometimes I forget of course to put it on – but most of the time I remember.  It’s fascinating to see how much I walk (or don’t) day to day.  The only thing I don’t like about Fitbit is how easy it is to lose.  I lost the first unit I bought on a trip to Jamaica when it fell off somewhere.  And the second unit I bought I’ve nearly lost countless times.  And that’s not even talking about the number of times I’ve nearly dropped it into the toilet.  So much potential fail there.

Interestingly, endurance athletes aren’t actually the target market for Fitbit.  Rather, it aims to increase physical activity in more sedentary folks.  By using a goal-based approach of steps or distance, it tries to leverage a bit of carrot and stick to keep you walking.  That said, I’ve found that for non-training activities, I enjoy seeing just how much wandering I do.  But…perhaps that’s the geek in me.

I know a lot of you are waiting for the FR210 review – and I had hoped to get it out this past week, but having virtually no energy made that tough.  Fear not – I promise to post it by Tuesday or Wednesday of next week (simply depends on if I need any final photos requiring my camera I get back late Monday).

But…that’s not the only thing I’ve got on the radar, also in the hopper (in no particular order):

1) Garmin Forerunner 410 (arrived this past week)

7) A whole bunch of other products that fill up the big product review box at home… (gotta have some surprises, right?)