October 9, 2010 by DC Rainmaker|Central and South America, Mexico, and the Caribbean » Travel|Comments (3)

The one and only thing you need to know about flying into Tegucigalpa is that it’s gonna be an interesting landing.  So interesting in fact, that pilots have to be specifically trained on the approach.

As you descend below the spotted clouds you can see the airport off in the distance, to your side – but itself surrounded on all sides by mountains.  Note in the below picture the airport (middle upper portion of screen), and note that the runway is the opposite direction we’re going.  Also note how low we are, yet how far away we still are from the airport. 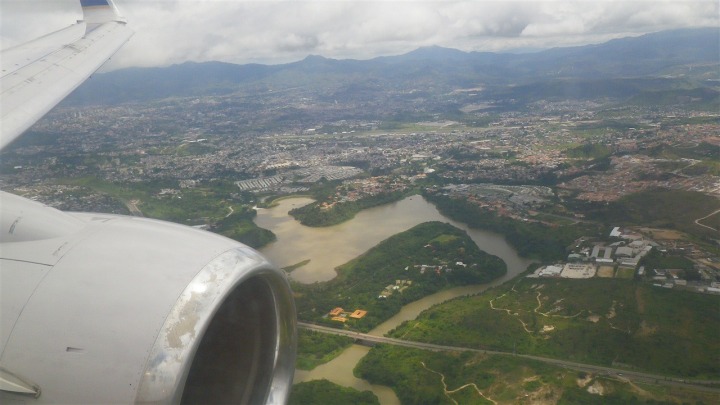 The approach itself involves a bunch of rather indirect routing, resulting in a bit of an ‘S’ flight path in the last minute or two prior to landing.  As part of this route, you are seemingly skimming the tops of houses and looking out at eye level at structures and mountains next to you as you swerve your way to the pavement. 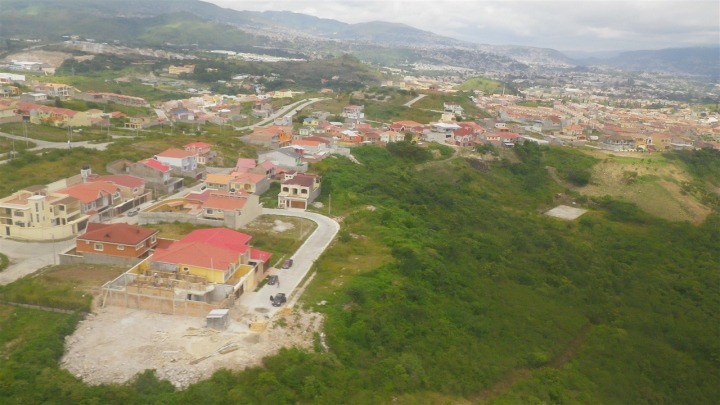 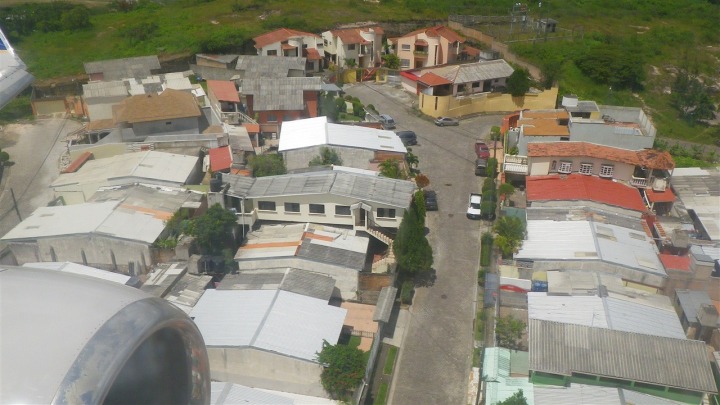 But, perhaps the approach is best viewed from the ground.  Prior to my departing flight this morning, I had been dropped off at the airport fairly early and had a chance to walk down to the end of the runway and catch what would be my departing aircraft, coming in for its landing.  As you can see below, the runway is in a bit of a precarious position, surrounded by houses and hills on both sides.  To put it into perspective, I stand here just beyond the end of the pavement, yet high enough that a plane would be equal to me in height if on approach. 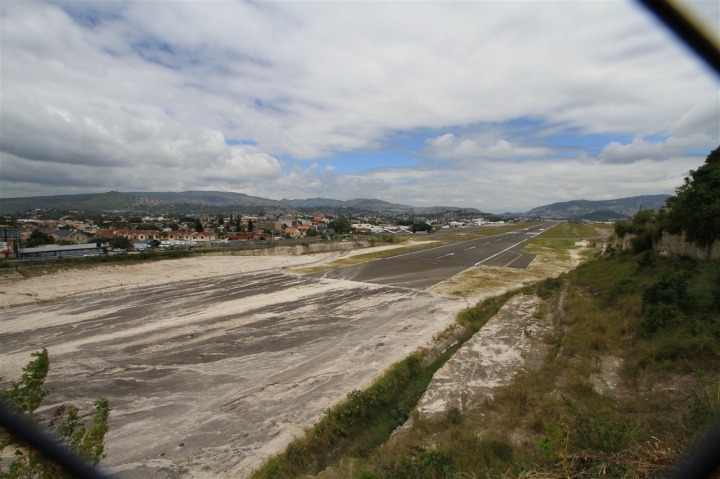 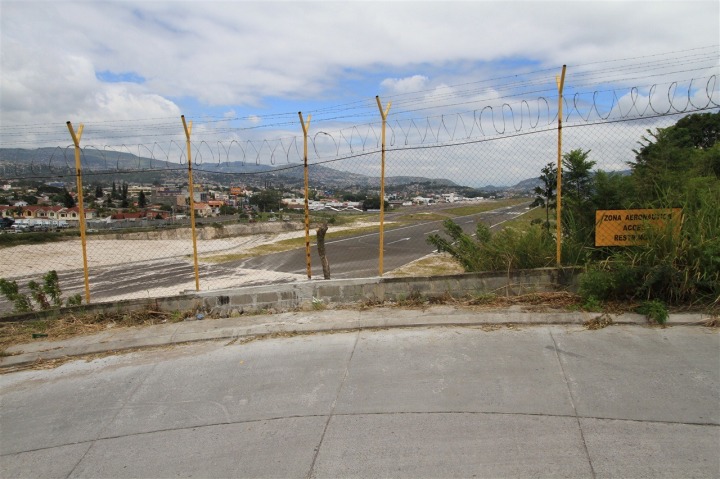 I ended up being below the flight path as the plane landed (mostly cause I couldn’t get high enough up on the hill as it landed a bit earlier than I anticipated), but you can still get a feeling for how close it comes – particularly laterally to the walls. 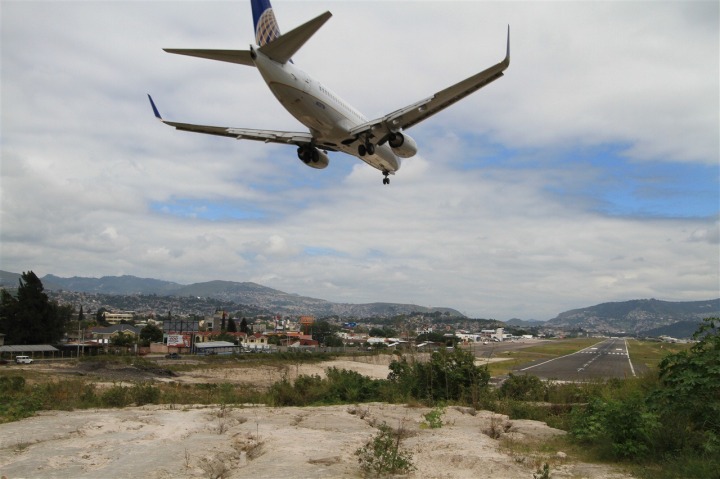 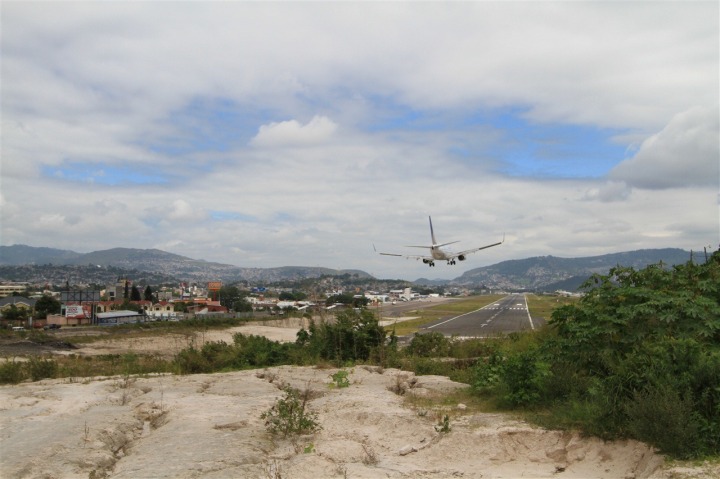 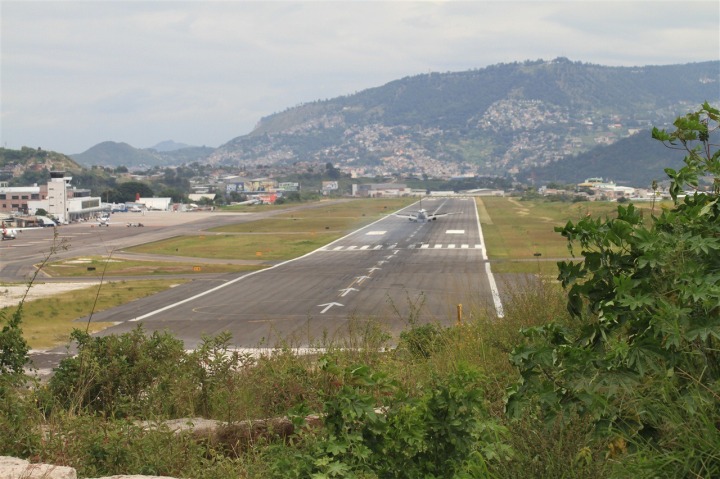 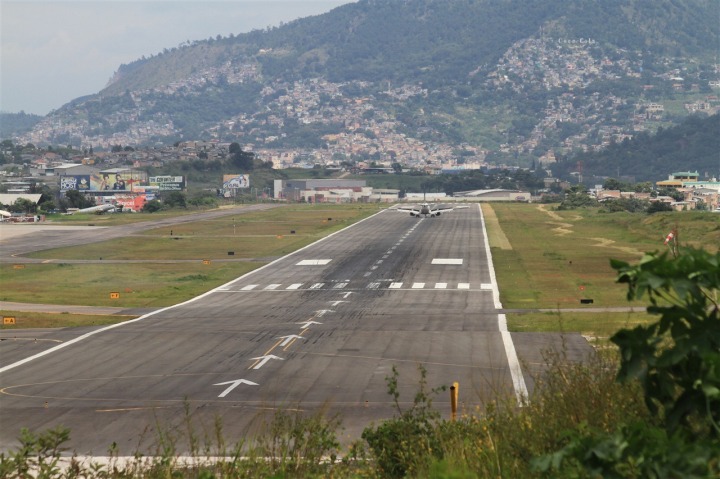 Finally, here’s the view of the walls…while at the end of the runway as viewed just a short bit later as a passenger: 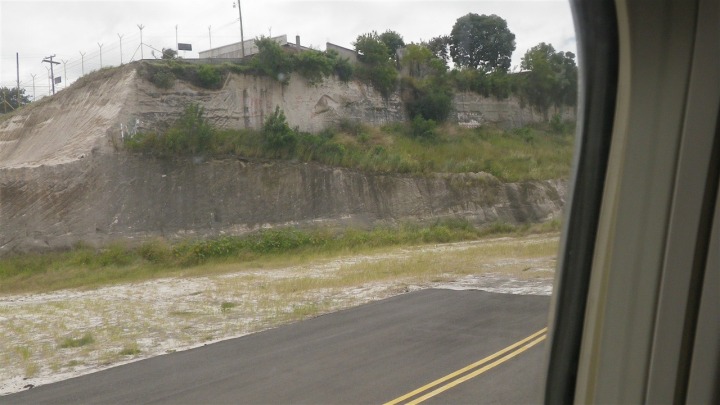 As for the city itself… I can’t say I saw a lot of it to be honest.

As is usually the case, I’m working from dusk to dark – and this was pretty much the situation here.  Though, I can say it was far less stressful than either Haiti (where I arrived from), or Kingston the week prior.  By comparison, the crime rates are significantly lower here.  I could actually walk outside my hotel…at least during the day here.  Night…well…not so much.

One thing I did find pretty funny was the telephone wires on the poles.  At first, it doesn’t catch your attention too much.  Maybe a passing glance: 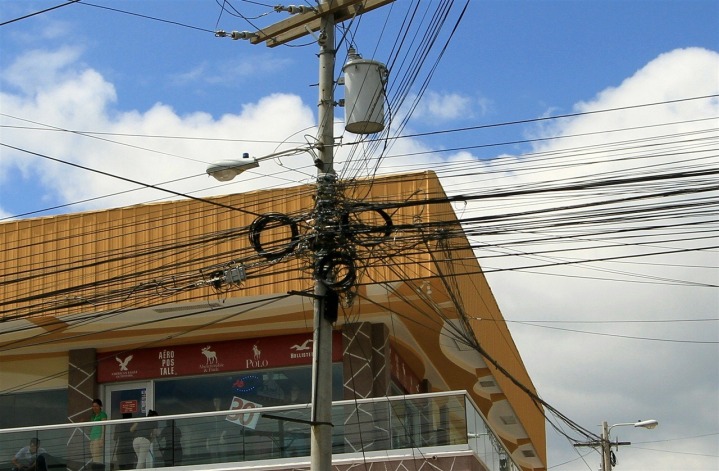 Then you start to notice the rather significant nest of wires: 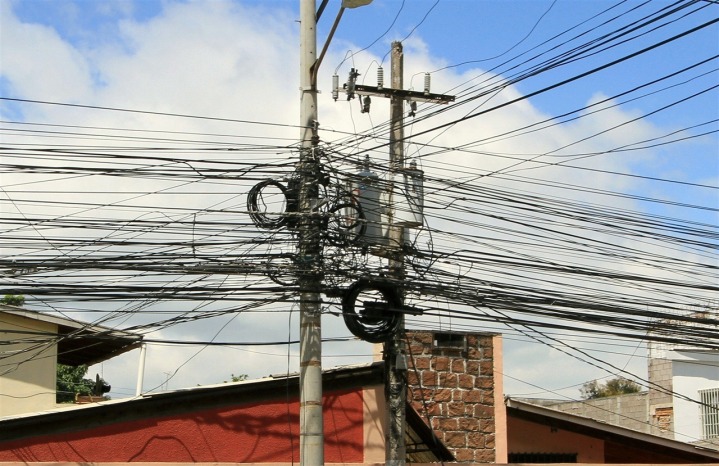 And every once in a while, you come upon a gem of a pole.  The real kicker is that many of the wires aren’t even connected anymore.  In fact, many are just cut, and left hanging down towards the street. 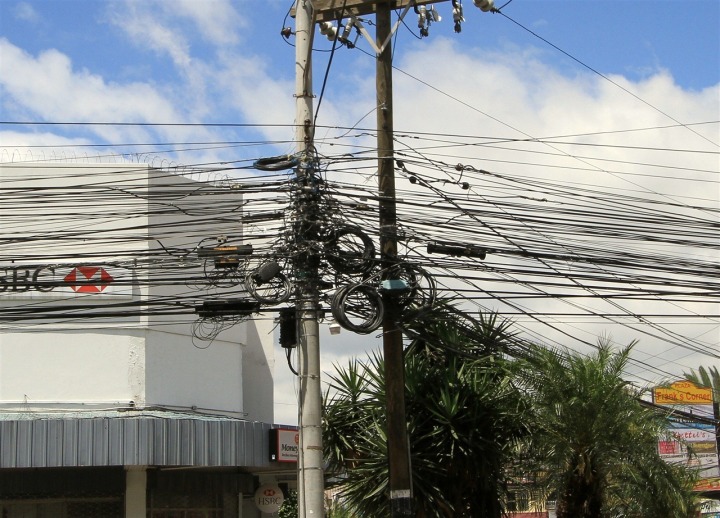 Speaking of gem’s…food prices.  It’s incredibly cheap.  Meals will cost you $5-7US.  So I had just finished an 8-mile treadmill run and was pretty thirsty when I got to dinner.  I saw they had Horchata on the menu, which is a non-alcoholic drink found throughout Central America.  I first was introduced to this on my San Diego trip a few months back, and have since come to love it.  Horchata is a rice-based drink that usually includes some vanilla and cinnamon as well.  It’s kinda sweet while not too sweet.  Love it.

At any rate, I was thirsty and they had three sizes on the menu.  Small, Large, and Extra-Large.  Up until this point, when I had ordered something to drink, it was usually rather small.  Given the extra-large size cost about $2, I figured ‘Why not?’, that way I wouldn’t be thirsty.

After it arrived it became clear I wouldn’t be thirsty for the rest of the trip – note the size of the salt/pepper shakers or silverware for comparison: 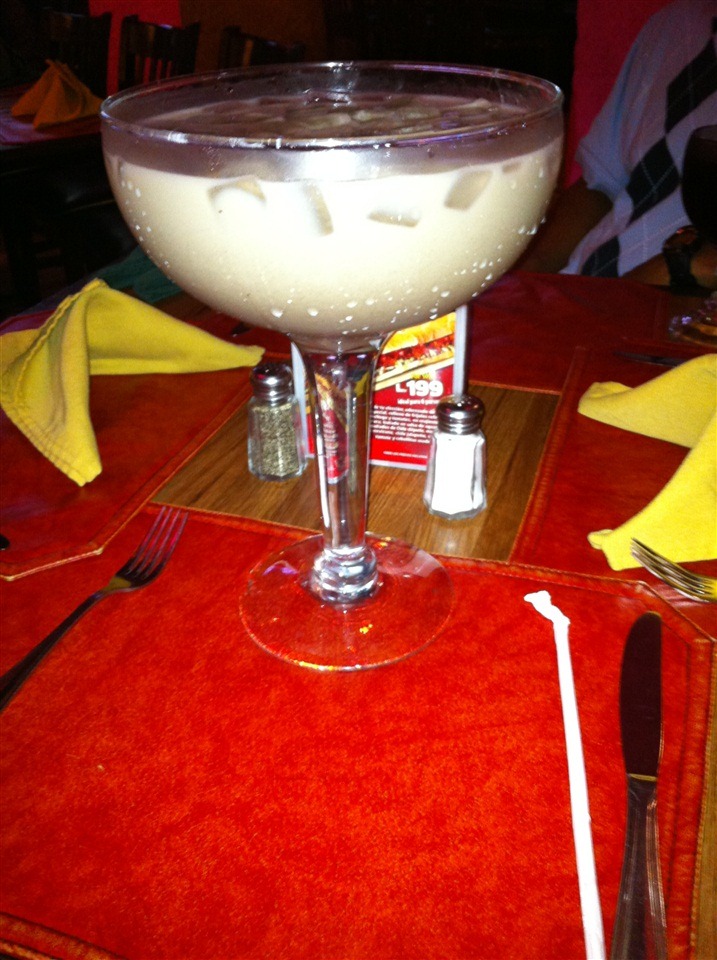 And remember – that’s non-alcoholic drink…otherwise this post would have ended up far more entertaining. 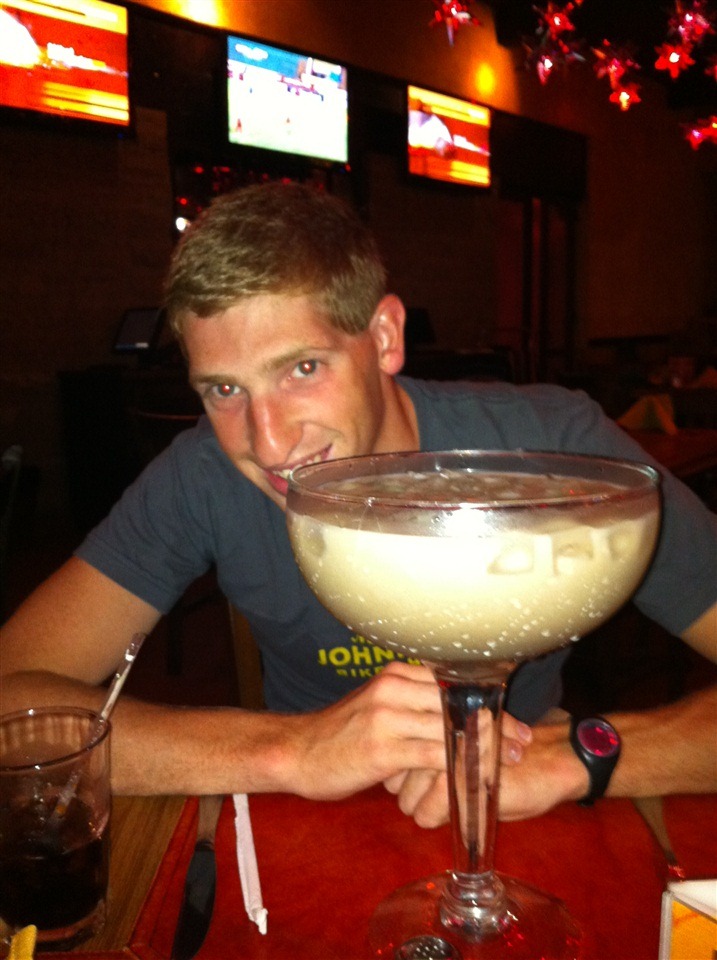 I also found these banana chips which were pretty awesome.  Especially for only a dollar. 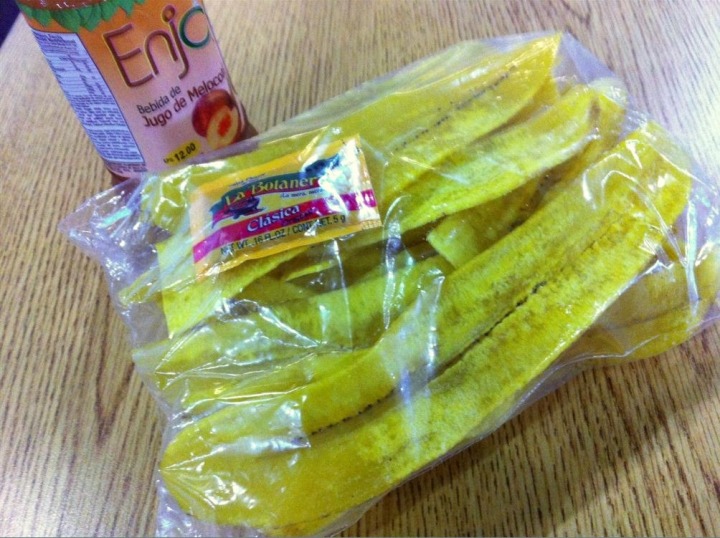 On the workout side, I got in a few runs on the treadmill’s at the gym. 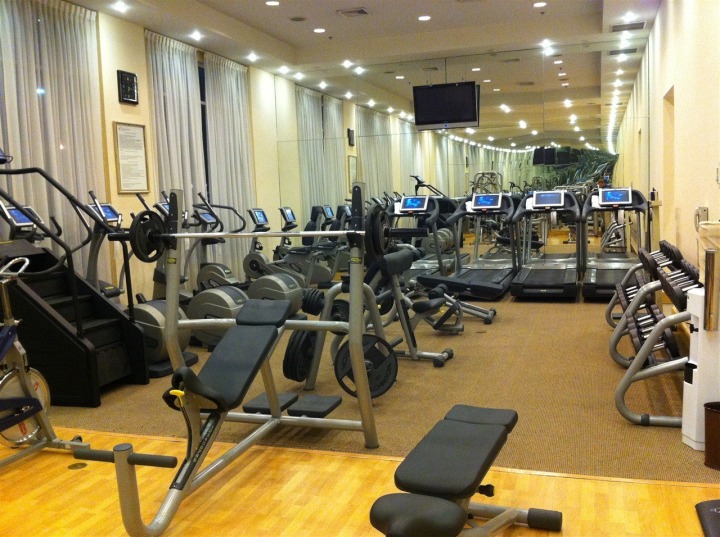 I somehow managed to actually crash the screen-system on my treadmill mid-workout.  On two different treadmills. In a row. 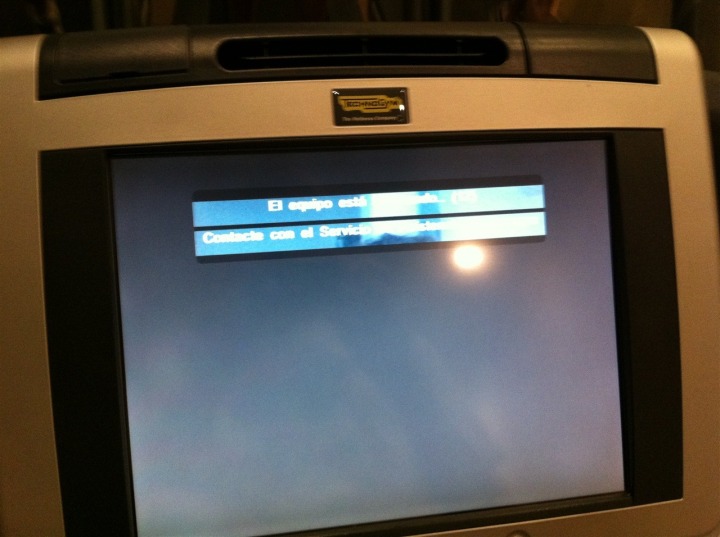 It was also entertaining translating everything from Spanish to English, and from KM/H to MPH.  The second part was easy…the first…not so much. 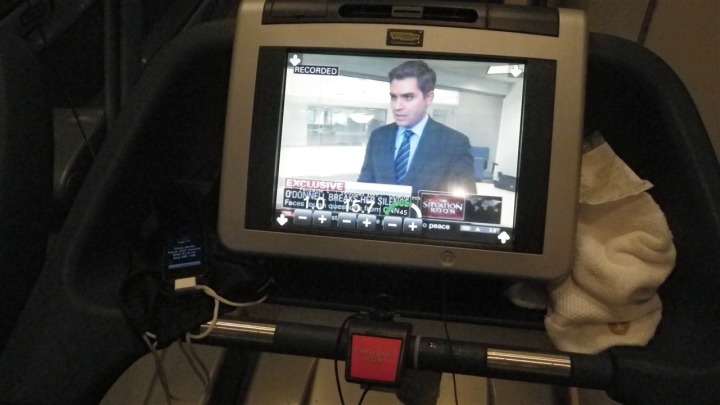 And I twice attempted to get a swim in, but both times the pool was closed for parties.  The second time – at 8AM this morning pre-flight – it was actually closed for a wedding party.  Go figure. 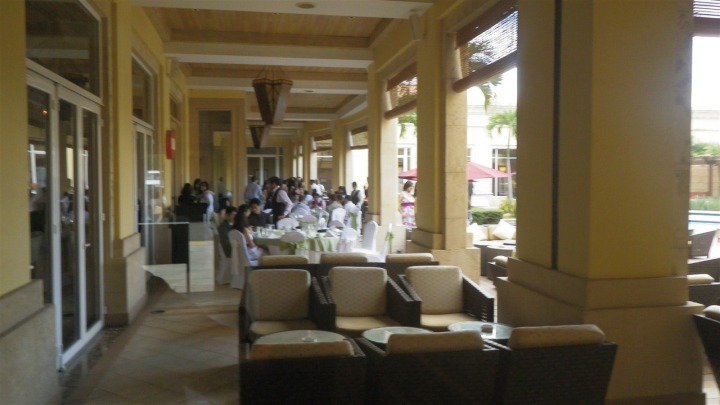 So with that, I’m on my flight back to DC… 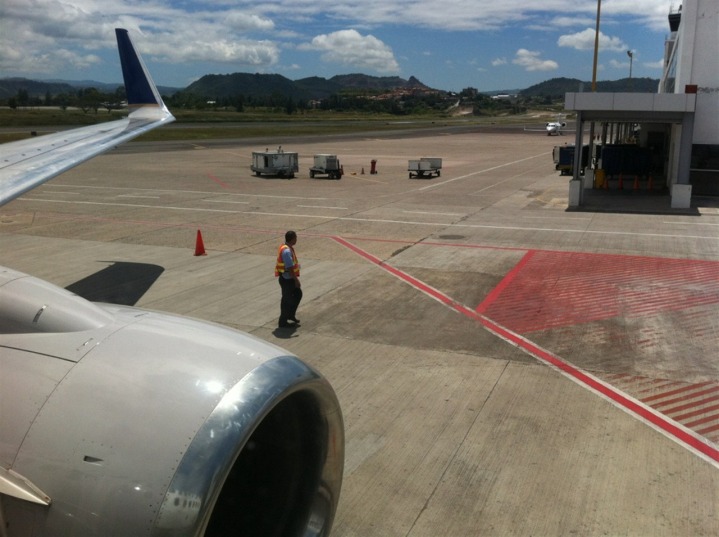 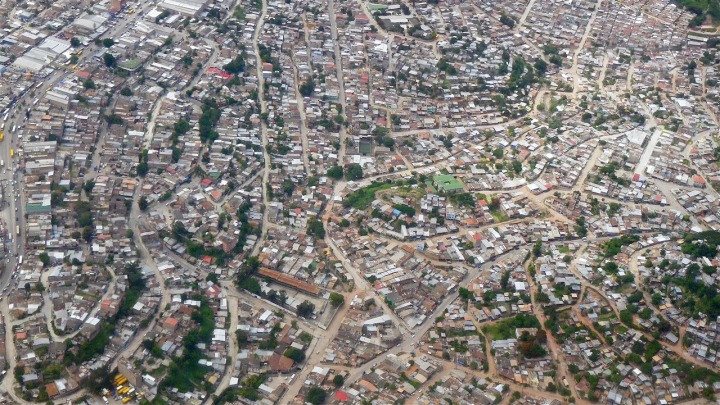 To America I go! 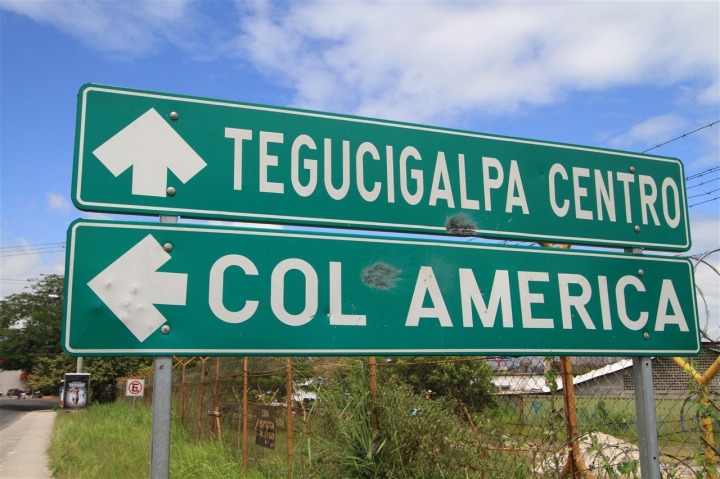