(Administrative note: Looking for the usual Weekly Mailbag?  No worries, it’s still a staple – but I’ve got some cool news coming about that on Tuesday…so hang onto your helmets and we’ll get there.)

Some of you may have seen the recent announcements earlier this week regarding a new power meter from Polar (in conjunction with Look), and also a new power meter called Power2Max from a separate company.  While both of these have been rumored for a while, with the intensity of rumors picking up over the last week – it’s just now that we have a bit more firm information (albeit, not quite concrete either).

A ton of ya e-mailed me over the past week to ask what I thought of the new systems – so I’ll detail each of them below.  I want to thank upfront though Luke from Pietsch, who helped get me raw PR materials from them, as well as sent me a bunch of information on the side.  While his site is in German, it’s got a wealth of information – and if you use Google Translate to offer the translated version, it’s quite readable.  And if you speak/read German…well, you’ll just have a field day!

Oh – and if you aren’t quite sure what a power meter is, then start here with this quick primer.

With that, let’s get into the first one – the Polar.

This is not actually Polar’s first entrance into the power meter market.  They initially jumped in back a long while ago with their chain stay based system which offered a fairly reasonable (cheap) option for Polar owners looking to get power data.  Though the system never quite caught on fully, mostly due to the semi-complicated nature of it and occasional inconsistencies.  While for some it worked quite well, for others…endless fiddling.  Not helping the cause was the lack of integration with non-Polar systems.

Now however, Polar’s teamed up with Look (the pedal company) to offer a pedal based power meter.  The idea here being that instead of having a power meter in a more traditional location (hub/crank/bottom bracket/etc…), it would be in each pedal. 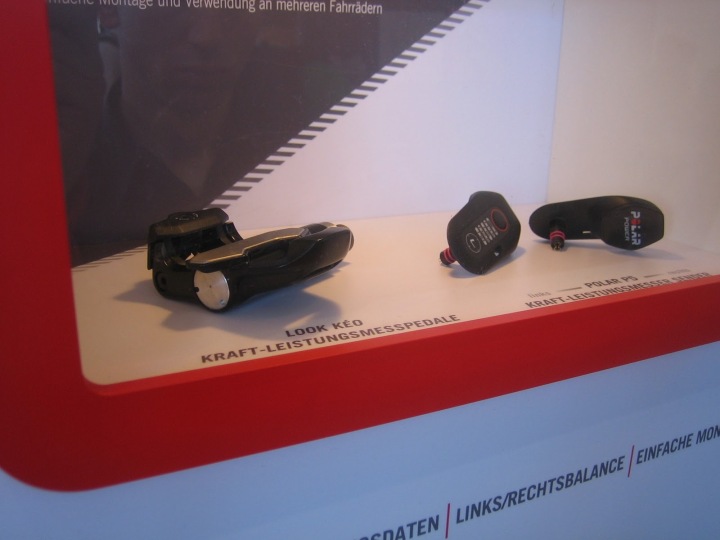 The benefit to this would be being able to offer per-leg power data.  An even larger benefit would be the ability to quickly and easily swap between bikes.  While some might be able to swap a Cinqo crank between bikes in 60 seconds (Youtube video here) – the reality is that most can’t.  However, swapping pedals is dead-simple.

But before we get into the new system, it’s important to also understand that two additional companies (well, actually a few others as well) have been working on pedal or cleat based power meters for a while – Metrigear and Brim Brothers.  Metrigear is likely further along based on last public comment, and there’s been significant speculation recently that Polar and Look bought out the Metrigear solution in whole or part.  Neither company seems to either confirm or deny these rumors – despite a heck of a lot of people asking. 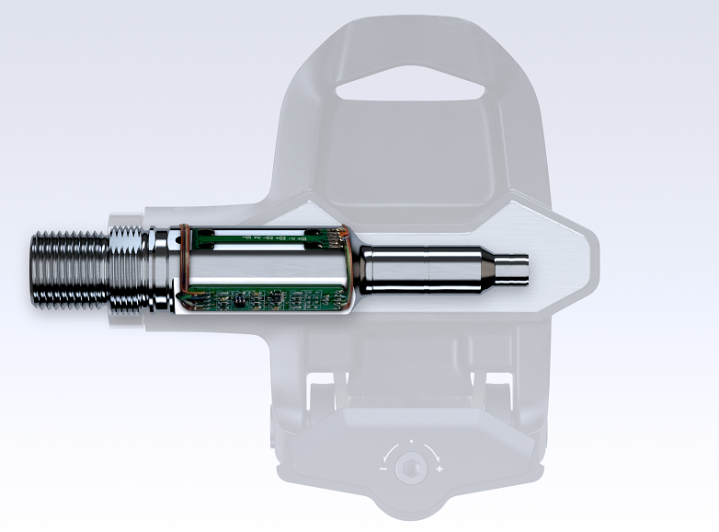 Given what I know – I don’t think this is a Metrigear solution under the covers – at least a full one.  First off, the Polar/Look solution is running on Polar proprietary W.I.N.D. protocol (based on BTLE), whereas Metrigear was on the ANT+ bandwagon.  Second, Metrigear was initially utilizing a different pedal type than the Look pedals – with all of their public efforts focused on Speedplay’s and not on Look’s.  And finally – Metrigear’s latest statements indicate they are clearly working towards a final product.

So – what does this all mean for the Polar product?  Well, let’s start off with the obvious: It’s not ANT+.  That’s probably been the biggest disappointment that folks have collectively sighed across the Internet.  While there’s no doubt that Polar makes excellent heart rate monitors – they are behind in the bike/running game when it comes to feature sets in integrated sport devices.  This also means that you’ll be unable to utilize any existing ANT+ head unit you have out there.  The most common being the Garmin’s (310XT/500/705/800), as well as the Saris Joule, the Bontrager, some smaller European brands, and a whole slew of new iPhone ANT+ compatible apps.  So in short…everyone but Polar. 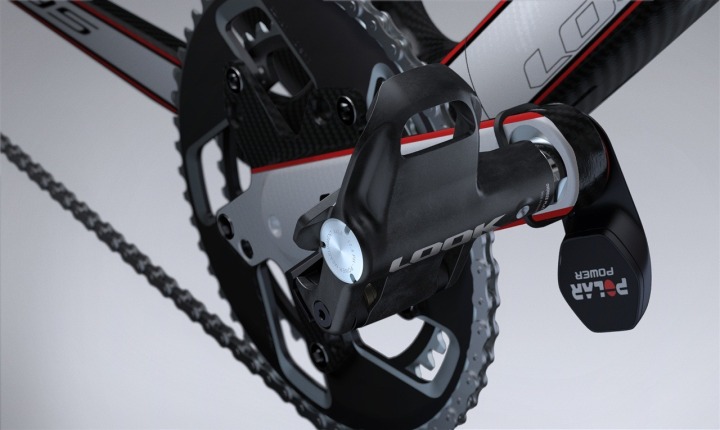 Regardless of which ANT+ head unit you use – the ability to choose is important.  For some, they see some of the limitations of the Garmin Edge series from a power meter standpoint (which there are some limitations), and thus would want to use a more feedback-driven power meter such as the Joule.  Or perhaps they want the uber-cheap & simple Bontrager solution.  They key here being choice.  This would not be the case with the Polar.

The next challenge with the Polar device is that the head units that work with it are very limited in power meter functionality, recording memory and configuration options.  The three compatible systems with the PM will be: CS500, CS600, and the CS600X.  Neither the CS500 or CS600 offer much onboard memory, and while the CS600X offers enough – it lacks many of the common power meter features found today in power meter head units.

Why next spring you ask?  Well, that’s actually when this will be available – Spring 2011.  To me, that says a few things.  First – it says they’ve got a long way to go.  Given no sports technology device company lately has been able to product product on stated timelines (especially power meter companies) – I think we’re looking at a scenario where Interbike 2011 is likely a better target (Fall 2011).  Second, from folks that talked to the Polar/Look team, the amount of information they could convey about real world use and testing was extremely limited: Meaning, it may be on a few test bikes – but hasn’t spent any time with race teams anywhere.

Finally – price.  The unit is priced at €1,500-1,800 Euros – or depending on the exact model, between $1,900 and $2,300US.  That’s a heck of a lot for a power meter, especially given you’re well into the range of SRM units at that point (considered the ‘Gold standard’).  One would have to seriously look hard to find advantages of the Polar system, versus a SRM system with a wider range of head units.  Had Polar gone with ANT+ at least they could have appealed to a much larger audience – specifically one that wouldn’t have to also purchase a new head unit (starting at a minimum $200).

In summary, I think the Polar power is a good step forward for power products as an industry, but I think it completely misses the mark on multiple fronts with respect to appealing to consumers – both on the high end and on the low end.

The second major power meter announcement was the Power2Max Power Meter.  This new power meter is similar in design to the SRM power meter.  It measures power in a more traditional manner, using force generated onto the crank and through the hub to determine power output.  In this design, like most products out there today – it only can determine total output and not individual leg output. 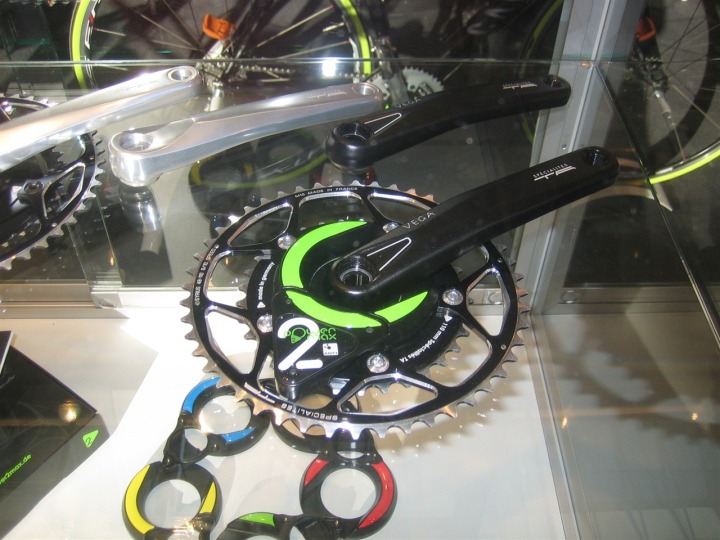 (Image used with permission from Luke at Petsch.ro)

They are much closer to production and are currently awaiting some supply chain issues with vendors around strain wires before they can roll into full scale production.  However, they will only initially be serving the European market until they can get into a stable position.  The reason for waiting on the US market is the wireless components are going to require FCC approval (and thus the associated testing costs/timeline lag) – so their priority is to get the product out the door, and then from there make it more widely available.

The Power2Max power meter utilizes ANT+, which means it’ll be compatible with all the usual power meter head units (Garmin’s, Saris, Bontrager, phones, etc…) – which is great news for many of us.

The best part however about the Power2Max power meter is the price.  They’re currently quoting a price of €690 – or about $890US.  That’s right in the range of PowerTap systems, and well below any existing crank based system out there today (by at least $500+ depending on model/options).  If they can both deliver a solid product that doesn’t suffer any technical issues with either accuracy or reliability and if they can deliver at this price point – they might have a hot seller on their hands.  Especially if they can get into the US market.

Finally, once down at Interbike in two weeks I’ll be able to get a better handle on the Polar/Look power meter and hopefully get much more concrete detail than what’s been available to detail.  The folks from Power2Max won’t quite be making the trip across the pond.  And neither Metrigear or Brim Brothers is currently on the exhibitor list (an unusual change from last year).

(Once again, thanks to Luke from http://www.pietsch.ro/ in his help gathering info!)