A look at Pedal Brain

Out of all the companies developing iPhone based cycling computers and/or applications – it’s actually Pedal Brain that’s been beating the drum the longest.  I had a chance to sit down…well…stand up actually, with Matt Bauer – the founder of Pedal Brain – to talk about where they stand on the road to market and what things look like today.

For those not familiar with Pedal Brain, they’ve got a full software + services product suite targeted at the iPhone that allows you to record ANT+ data (power, heart rate, cadence, speed, etc…) to your phone, but also to stream it to the web in real time, as well as offer a full training suite – similar to something like Training Peaks or Garmin Connect.  One major difference though is that Pedal Brain is tailored a bit more towards the ‘team/coaching concept’, as well as the individual athlete.  But…let’s get into that here in a minute.

For now, let’s start with the unit itself.

Their case consists of three basic parts: The stem mount, the main case/battery, and the rubber plastic top cover.  The below engineering prototype shows the internal battery compartment, but the final one will have that covered/sealed.  You can also see the small Mini-USB charging port as well in there, which is how you’ll charge the unit. 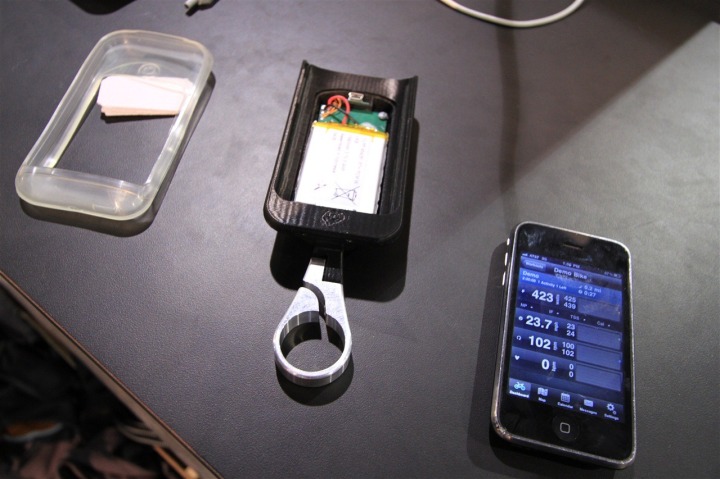 The case is molded in ABS plastic, and thus is incredibly lightweight – but also durable: 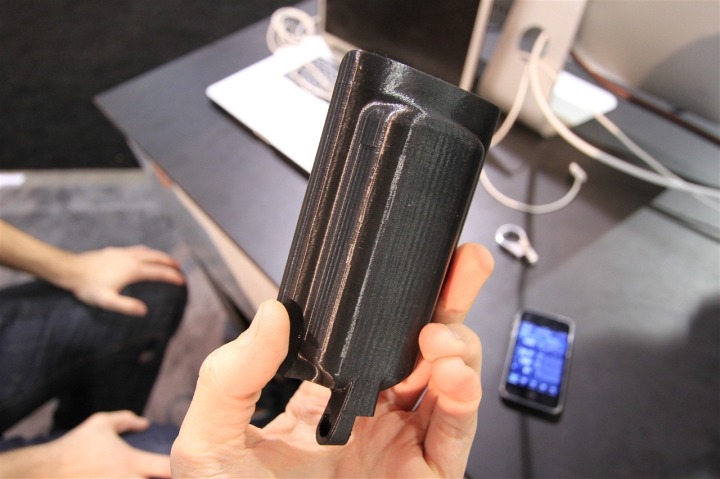 The one area that had me a bit concerned was that the cover itself doesn’t hermetically seal the device in.  Matt commented that the iPhone screen itself is actually pretty watertight, and that it’s the connectors/edges that are more the problem.

While I don’t doubt that (as I’ve seen from my own experience outdoors), I’d still be concerned with having it open to the elements.  Both the Wahoo and iBike cases are a bit better sealed (with the iBike Dash being just about sealed safe to chemical weaponry as well), but I’ll trust that by time the final product is out, they’ll have fully validated the weather proofing angle. 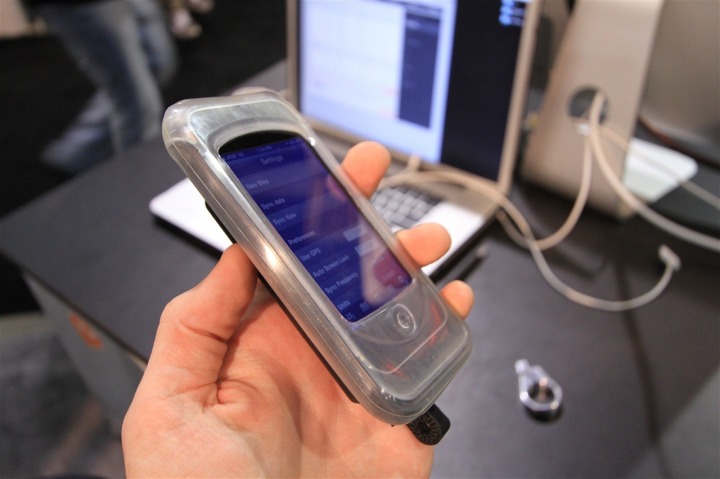 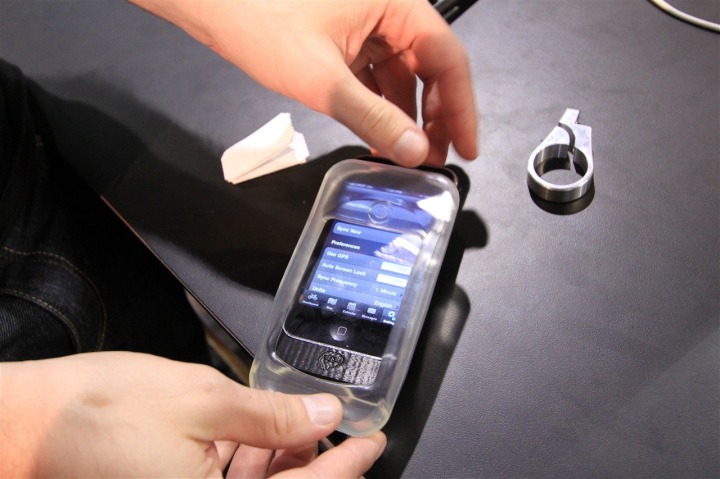 One of the really cool aspects of the case is the internal battery – which is good for about 8-10 hours – or even more than the other cases with integrated batteries out there.  By default, the iPhone will use its own battery until you get down to 20%, at which point the backup battery within the Pedal Brain case will kick in.  Though, the software also supports the ability to simply charge the iPhone from the Pedal Brain case as well.  Meaning, if you need a bit of extra juice…the Pedal Brain case effectively doubles as a power outlet.

Finally, you’ll note that it charges via a mini-USB connector – just like most cameras.  This is nice in that it doesn’t require any special USB cable – just something that you probably already have about 38 of sitting around the house.  Note that the Pedal Brain stores all data on your iPhone/iPod (and the Pedal Brain servers), so there’s no storage on/in the case itself.

Speaking of their site – let’s get into a bit of the tour there as well.  Pedal Brain is more than just an iPhone case, it’s also a fully integrated service.  This is one area that they differentiate themselves from other companies out there – in that they offer a full platform for your data and training/racing. 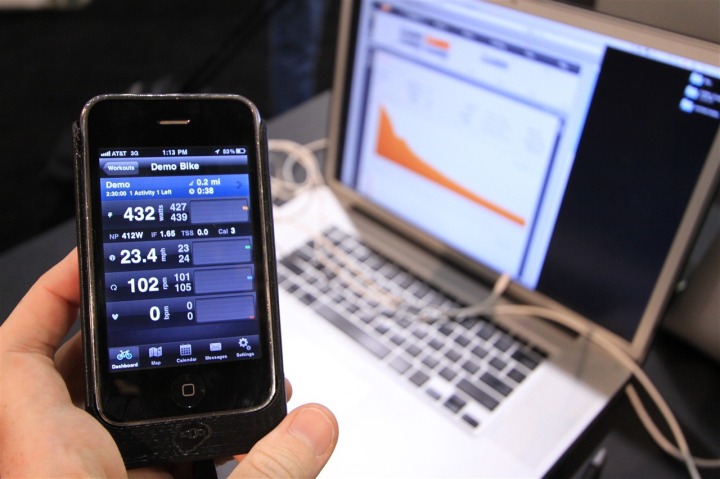 Perhaps the coolest aspect of their site is the ability to do live streaming of ANT+ data straight from your iPhone to the site.  This would allow coaches or friends to view data right as you train or race.

Integrating well into that same concept is the ability for coaches or team members to then ‘message’ you directly via the application.  Pedal Brain supports an internal private message system which normally is used for team functions like announcing a Team BBQ – but could also be used for a coach to tell an athlete during the middle of a 112-mile ride to “HTFU”.  Or offer other words of positive encouragement.

And, via the map a coach (or team) could see all his/her riders on a team out riding, and exactly where they are: 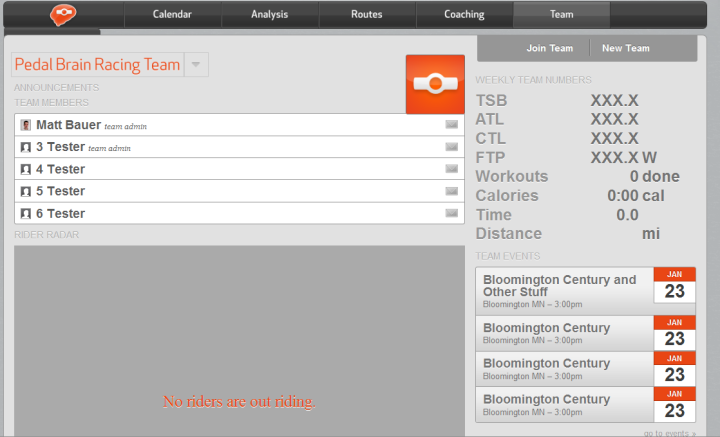 If you look next to each member of the team above, you’ll see a little message icon, allowing you to compose a message.

You can then see below how it would show up in your phone – similar to how you might receive text messages: 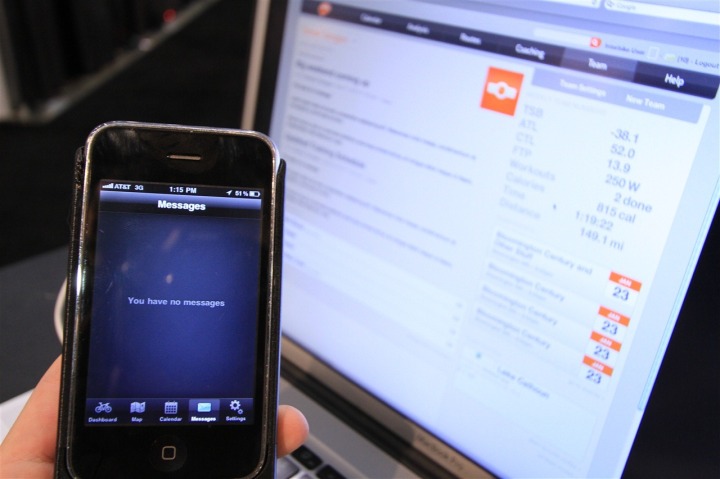 Additionally, before you head out on a ride, you can also create a route to download to the phone to follow, via the route page.  In addition, you can upload existing GPX/KML/CSV files to generate routes (like those from MapMyRide.com) – which are the common format standards out there today. 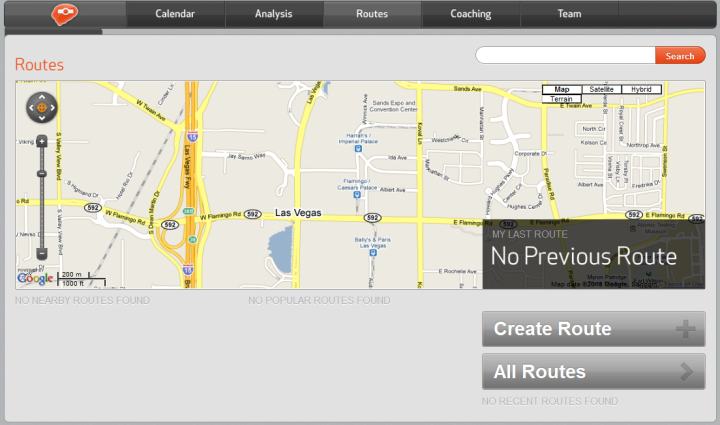 Though, much of your time spent on the site will likely be after your ride, so they’ve spent considerable time on the analysis and ride visualization front.  You can see a quick ride recap below:

You’ll note they’ve spent a fair bit of time incorporating power meter related data into it as well. And they’ve also included quite a few of the stress-based training metrics like TSS: 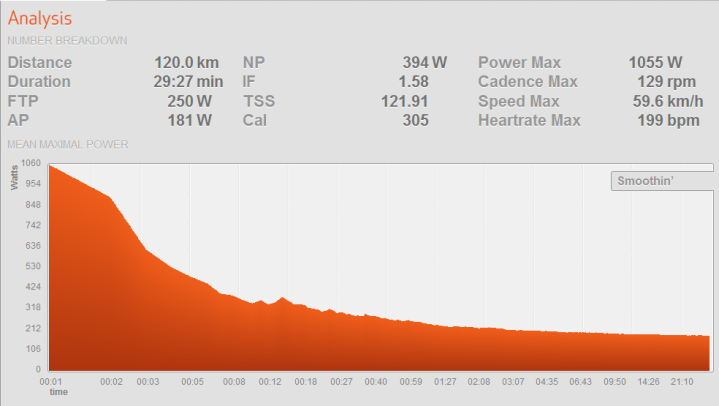 The iPhone app itself has an amazingly clean user interface (UI).  Pedal Brain invested time and resources into the UI, and it really shows.  By far this is the prettiest looking iPhone bike computer app I’ve used to date.

In the below example, you can easily read out your various ANT+ data being shown in real time, but also see small moving history graph of metrics like HR, speed, etc…  And you’ll note that they’ve snuck in values such as NP/IF/TSS and Calories between the larger more time-sensitive fields.

You can customize which data fields you display easily with the press of a button…err…screen. 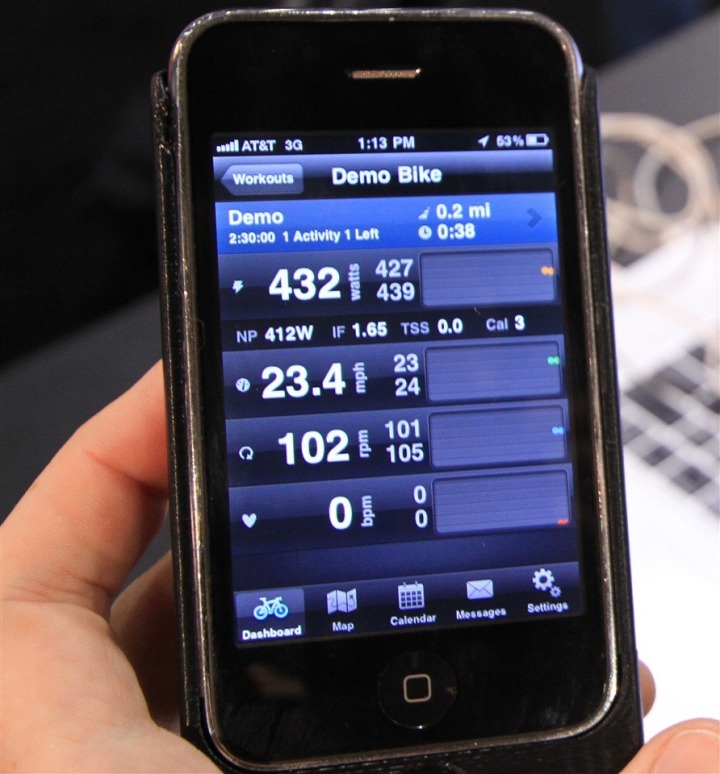 I also love the fact that I can easily add or pair ANT+ sensors to it.  Unlike many of the wrist-watches, adding ANT+ sensors can sometimes be a bit of a PITA if multiple sensors are around.  In this case, you can easily choose and name which sensors you want. 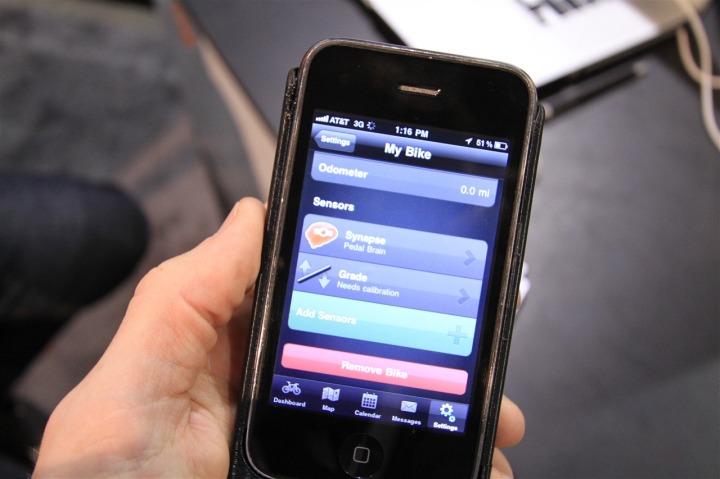 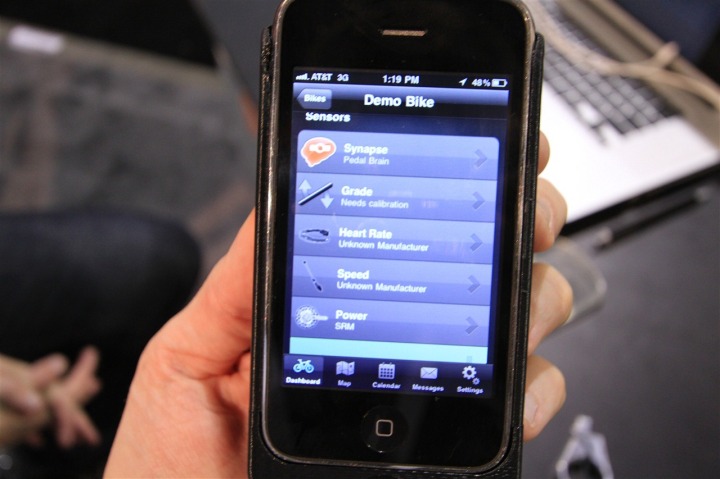 Additionally, you can configure how certain types of sensors such as power meters interpret data.  For example, some power meters include cadence – you can select whether or not to use that cadence information, or use a dedicated cadence sensor. 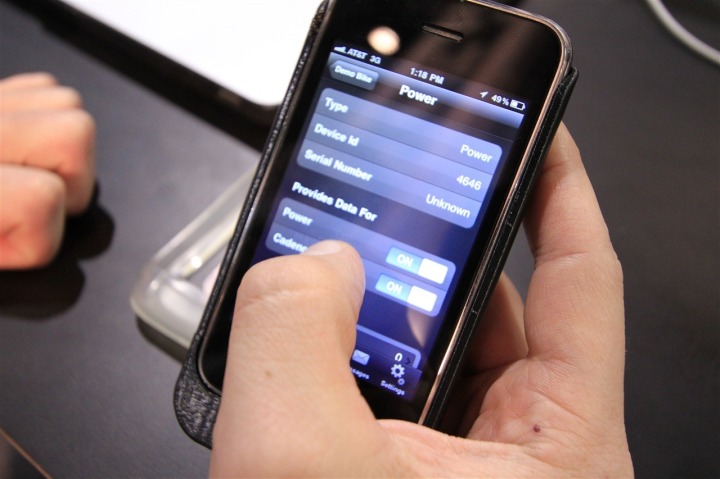 Finally, while I didn’t grab a photo of it, the app includes a full map with position data just like you’d get when using the iPhone’s normal map.  Pretty cool for times when you’re in uncharted territory.

Pedal Brain expects to have units by the holiday season, and is planning on sending me one of the final hardware prototypes here in the next 45-60 days – so I’ll be able to give you a full review then.  The hardware itself will cost a bit under $200, and they’ll have a few varying levels of software/suite monthly plans from free to not-free.  You can check out all the prices here.  Of interest is the .25-second recording rate available in the premium category – which is something that I’m fairly certain is available from no-one else aside from SRM.  They’ve also got pricing plans for coaches as well.

I’m looking forward to seeing how both the software and hardware aspects of Pedal Brain develop – especially given how clean their interface is and how refined the backend service is.