I am about to purchase (note the intent!) a GPS HRM as my first HRM as I recover from an ACL reconstruction. I like my gadgets (an engineer) and don’t really enjoy doing things in halves…hence the GPS. I’ve honed in on the 310XT as my tentative decision as the FR405 touch bezel irks me significantly and the separate RS800CX GPS pod is of equal irk-ustation. I have been to the 310XT user manual and a few forums with little sign of recent information (<12 months old) and my posts aren’t attracting any replies. So, the question: do you know if Garmin has updated their firmware to allow for viewing of interval time history during recording of that session i.e. viewing laps 1-10 sequentially when your coach asks “how’ve they been?” during your recovery?

On the Garmin Forerunner 310XT – if you’re in normal running mode and start doing intervals, you can view the current lap – and you can also add the ‘Last lap’ data field, to show the previous lap.

But while running (and have not yet pressed stop), you cannot view any previous laps within the History pane.  This will only activate after you’ve pressed stop. 🙁 Meaning, you can’t quite do what you want to do while on the track itself – only after the fact.  Sorry!

Item #2: Step by step guide to well washed and dried Forerunner 305:
From Matt-

(Note: This isn’t so much a question, as just a good/funny story that I thought I’d share)

When I purchased my 310XT last year – mostly because of your review and my wonderfully smart/dumb idea to do a Half Iron man this year – my Forerunner 305 was donated (procured) by my Girlfriend. Needless to say that after a couple of days with it she was wondering how she trained and lived without it. A Love affair began.

Here’s where the story begins…

Last night was laundry night – (gulp) I think you get where this is going……the 305 got a thorough cleaning in the permanent press cycle with a heat induced spin in the dryer. As the 305 got dumped onto the bed – the house was on the verge of tears.

Reluctantly we put it to charge – heard a beep – got a blank screen.

I was not very optimistic but thought it was worth a shot as I know gadgets and electronics a bit – if you get away with water – you certainly wont be able to get away with heat.

We then did a ceremonial blessing – tried to keep positive thoughts – and went to bed. The love affair was over – a bad breakup to say the least – a solider dying on the field.

We woke up and got ready for a run this morning. My girlfriend was somewhat depressed as knew she would have to be looking at running without the beloved 305 – which has become her training partner (not just virtual partner).

We pulled it off the syncing bracket and fired it up………….she was ecstatic to see “LOCATING SATELLITES” ………………TEARS OF JOY!!!!!

After the little run this AM it was all recorded – moreover all the history was retained!!!!  I know ……………WHATTTTTT?

YEP – the 305 went through the washing machine AND the dryer and came out ALIVE. Unrequited Love can not be held down.

I’ve enclosed a picture. There is still some condensation in the right corner – but other than that – no worse then when it went in. I was thoroughly impressed, my girlfriend beyond words – and the Virtual Partner lives to run another day (in 2nd place though). 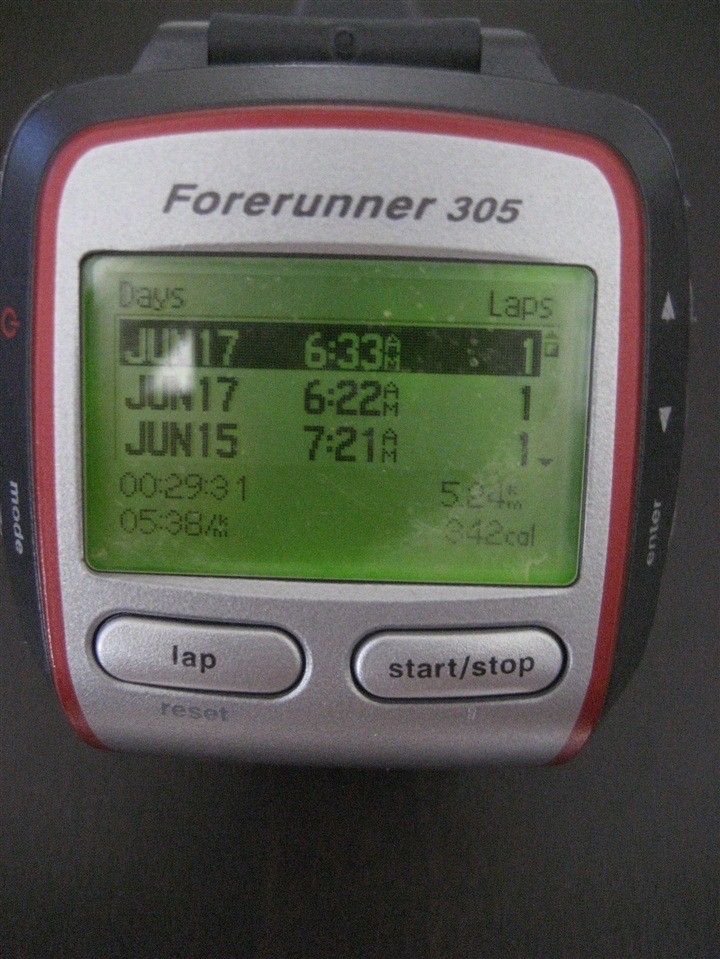 Question #3: Sharing my workout data online
From a different Matt-

I’m curious if you’ve ever considered opening up your training data and posting everything on the blog or allowing read-only access to your Training Peaks data. I know that you post samples every now and then but I think posting everything would be fantastic. While I could understand that your coach may not be thrilled about this and could consider it to be the equivalent of making copies of his program, on the other hand it could be good marketing for his program and increase his customers. Obviously there are many considerations but I figure you’ve at least thought about it and have some opinion on the matter. Perhaps you can comment in a post some time.

Thanks for reading, and thanks for the comments – I appreciate them!

Interestingly enough, Coach Alan Melvin actually enjoys the blog quite a bit and finds it endlessly amusing. We’ve found a pretty happy median with respect to posting his workouts occasionally as part of a longer story – for example, my IT2 past back exactly two summers ago.  However, as you noted – like any Coach, it is indeed his property and he spends a LOT of time on it.  Both the workout structures themselves, but also my workout schedule and accommodating my whacky travel schedule.  I can’t begin to explain how appreciative of him I am when it comes to those phone calls of “Umm…I now need to go to San Diego next week, can you convert my entire week to a travel-friendly one?” – and that he happily does it based on everything from my exact flights to work hours.

And like you said, he’s certainly appreciative of the interest.  Anyway, I know he’s always interested in ‘highly motivated athletes and dedicated athletes looking to excel’ (you can find him in the USAT directory for Springfield, VA).

Finally, the biggest challenge is that in my Training Peaks account I put a lot of comments in there meant specifically for my coach (or myself).  So in some ways, I don’t entirely want those to be public since they’re more quick jotted text notes like “Holy crap, that sucked!”, and things of the like. 😉

You can find all past mailbags here.