“So I’m slowly figuring out my new 305 which works fine.  I have not been able to find out on the the Garmin Support website how to tell GTC NOT to auto load – it does not seem to be on the User menu, there are no Preferences I can find, and it’s not in the Help in GTC – Google was no help – you said this was what you did, but how, do you remember?”

This is controlled via gStart.exe, a small taskbar application that runs and automatically opens up GTC when the Forerunner 305 is connected (or any USB Garmin device).  It’s normally located at C:\Garmin\gStart.exe, which…you could just rename…to something like gStartNoStart.exe and that’ll solve it. 😉

Or the cleaner way is you can go to Start > Run and type ‘msconfig’, once it’s launched click on the Startup tab and deselect ‘gStart.exe’ from the list.  Restart whenever it’s convenient.  Simple as that.

For those with ANT+ wireless devices (FR405/310XT/FR60), you can simply select not to open GTC in the ANT Agent control panel, using the below checkbox: 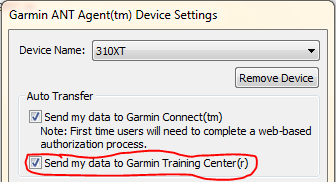 “Do you know how to delete data from a Forerunner 305 tracked workout. I was doing a 30 minute run and pressed the start/stop button at the end. It stopped, but then a couple of minutes later I noticed that it has started back up again. The extra data was recorded as part of that “lap” and it has impacted my average heart rate. Is there a way to deleted data at the end of a workout so that I only have data for the first 30 minutes, not the fully recorded 36 minutes?”

You unfortunately can’t do it in Garmin Connect, Garmin Training Center or Training Peaks.  But…

You can however do it in Sport Tracks (Free), as I semi-regularly make the mistake myself of either forgetting to turn it off – or accidentally turning it on later on – I tend to do this a lot.  To fix this, you can just trim the end off of the activity, using the Edit > Split activity option.  Then using the below wizard simply split the activity at the point right before it started again and delete the spare (leftover) portion. 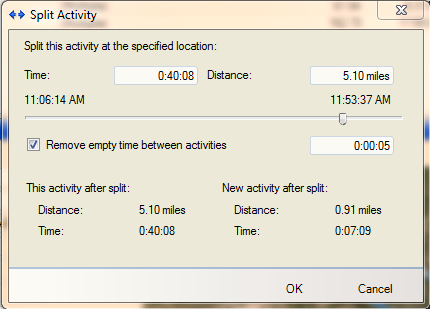 While there isn’t a way to do delete unwanted chunks in Training Peaks, I just simply highlight the relevant portion in the graph view, and then look at the stats on the left hand side.

“I want to upgrade the type of running data I get (currently using the Nike+), but I’m still really undecided on which way to go.  I’m a casual runner (50 miles or less a month).  I run both outside and on a treadmill.  I’m not interested using it for biking or swimming.  I was excited reading your review on the 110, but then saw it wouldn’t work on the treadmill.  I’m fairly petite – 5’2” and I’m afraid the 305 might feel like doing bicep curls.  Any suggests on which way I should go?”

I think you’ll find the Forerunner 305 isn’t too big for you.  The Girl is about your height as well, and she got used to it in roughly 30 seconds.  Most folks find that while it looks big from afar, once they put it on they don’t notice it after a minute or less of running.

As for Forerunner 305 vs the new Forerunner 110, I’m still recommending the 305 over the 110 for almost all cases.  While the 110 is smaller, the feature set is severely cut compared to the 305.  That said, if you’re a casual runner then the 110 is pretty much the target audience for that watch.  Unfortunately, like you said they aren’t enabling the use of foot pod (yet anyway), which is one of your requirements for a treadmill. 🙁

Keep in mind that most places (including Amazon) allow you to return it if you don’t like it – which is always the way to go!

“I like your Sous Vide project a lot. Could you put liquids into the vacuum-sealed packaging (like a marinade or sauce) and cook it with all of that in there? Can you hard-boil an egg in there and report back?”

Yes, to some degree you can put liquids in there.  Having a bit of marinade isn’t too much of an issue.  The challenge is that the vacuum sealer tries to vacuum the air out, which can result in the liquids getting vacuumed out as well (which is a mess btw).  Far more expensive chamber sealers solve this problem, but that’s not what I’m using.  The alternative that many folks do is simply freeze the extra marinade in a small ice cube tray and then put it in the bag frozen, as it’ll melt shortly after being put in the hot water, but at least it’s in the bag.

As for the eggs, yup – in fact, that’s one area people are really all excited about with Sous Vide.  Specifically, the ability to make soft-boiled eggs at exactly whatever consistency you want.  For example, check out this mother of all soft-boiled egg posts, complete with math equations, pictures and many many eggs.  As for hard boiled eggs, you can do that just fine too.  I did two just for fun, but honestly – it took 75 minutes and was way more hassle than it was worth compared to just a simple pot of boiling water. 🙂 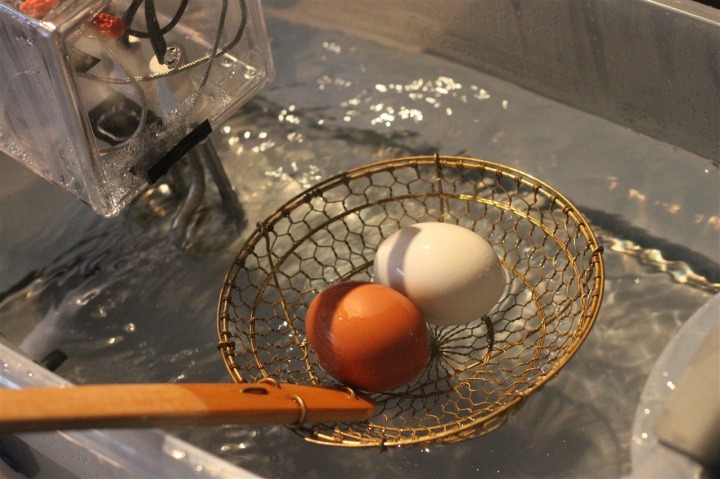 Also, oddly enough the brown egg came out slightly overdone.  It was originally the same size, but my hard-boiled egg peeling skills suck, so it ended up being considerably smaller by time mission was completed.  No idea why. 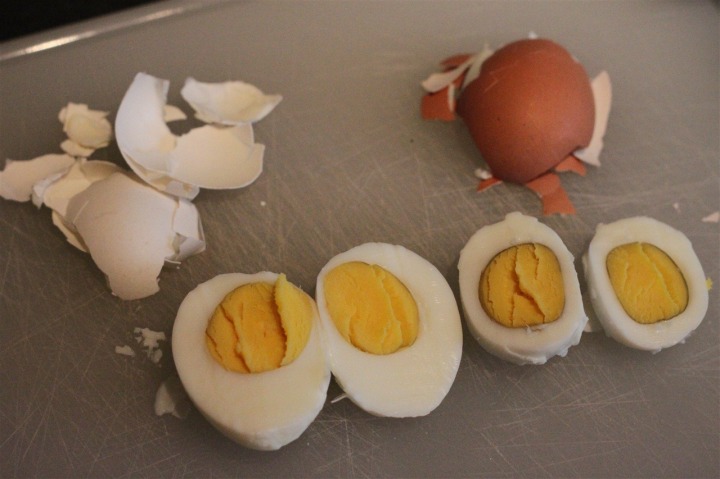