Today was (and still is) a busy day.  We were on the road shortly after 6AM for the first Skyline Ride of the season.  For those not familiar, Skyline Drive is a long 100 mile road that rides along the ridgeline of Shenandoah National Park.  It’s all climbin’, all the time.  Up, down, up down with very few flat spots.  But it’ll make ya an incredibly strong cyclist.  I’ll be there virtually every weekend until summers end.

We arrived about 75 minutes after we departed and headed up to Dickey Ridge visitor center to start from there (4.6 miles into the park).  Eventually I’d backtrack to the entrance to get that first 1,000 foot 4.6 miles climb in though. 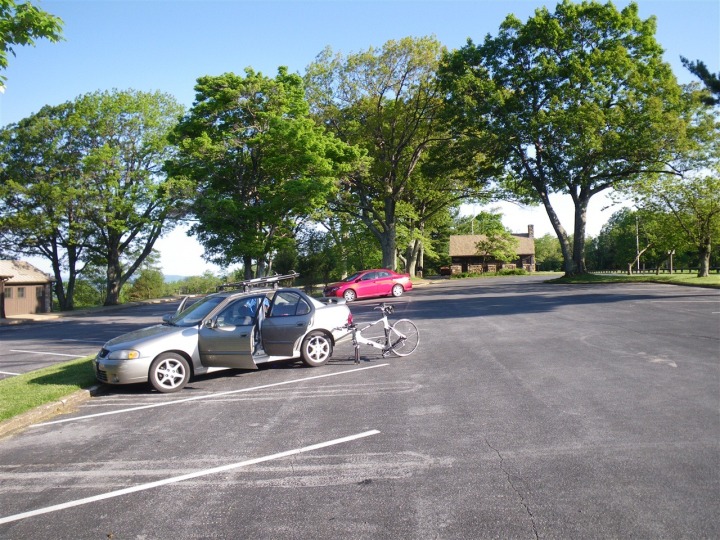 This time of the morning there wasn’t anybody around except the ranger opening up the bathrooms.  So we quickly got set and headed on out.  Unfortunately my rear race tire developed a flat over the week, and I didn’t catch it till yesterday…and I was too lazy to deal with replacing it with all the glue mess (tubular tires).  So I used the normal stock wheels today. 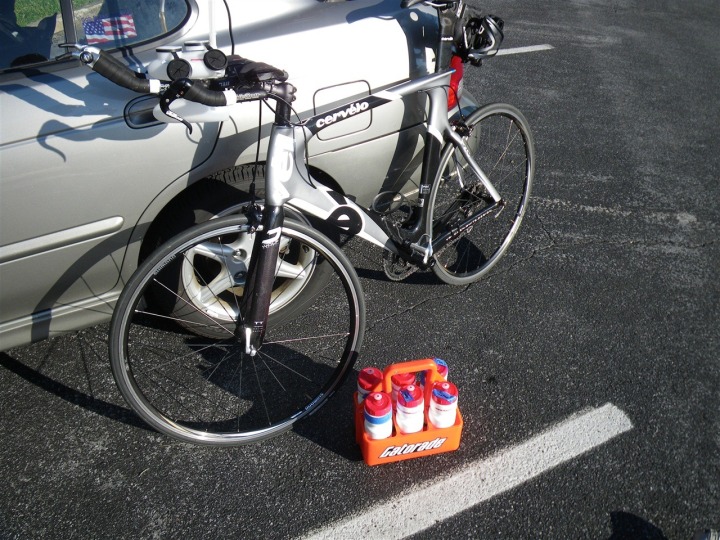 From there it was time to climb.  And within about half a mile I saw my first animal of the day – a deer.  Woot! 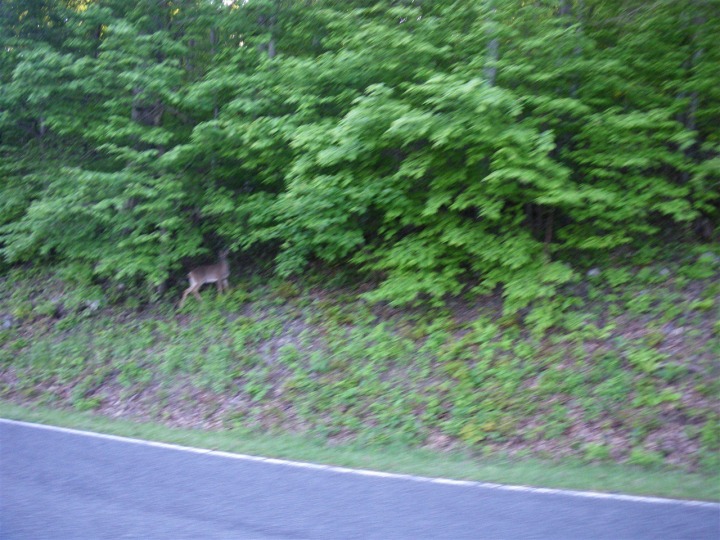 Then it was back to climbing… 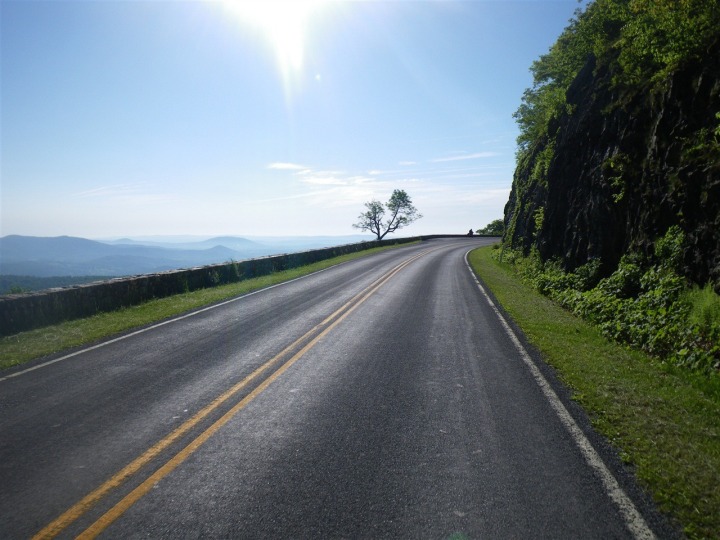 The trick to a long ride on Skyline is simply getting in your easiest gear and spinning up.  All my long rides are in Zone 2, so that’s really the only way to roll (easy gear) and still keep a high cadence.  Which means my levers pretty much looked like this the whole day: 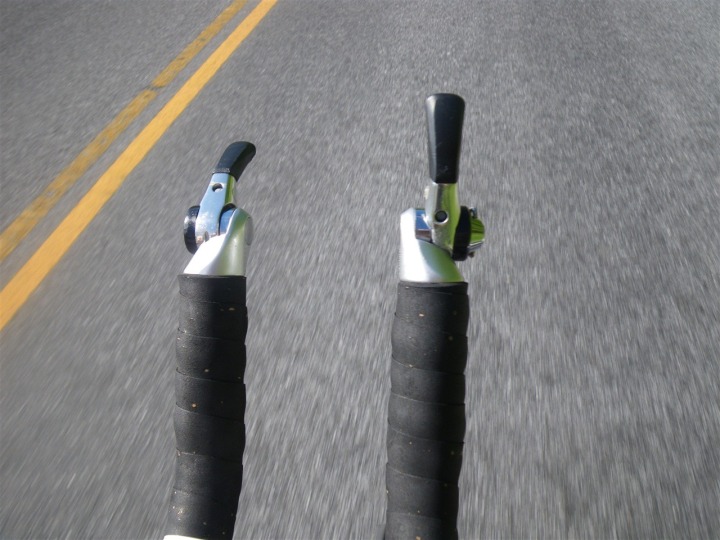 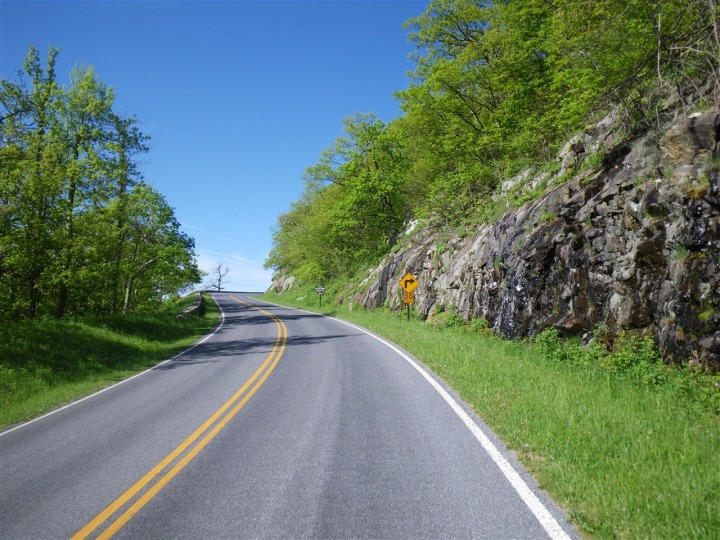 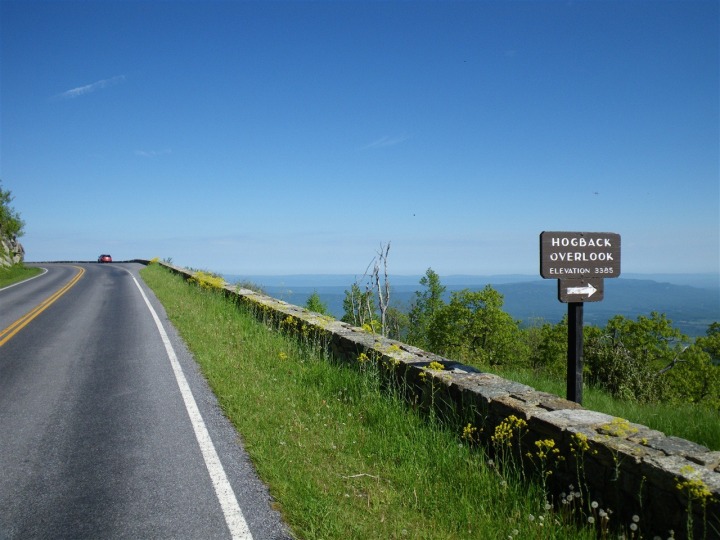 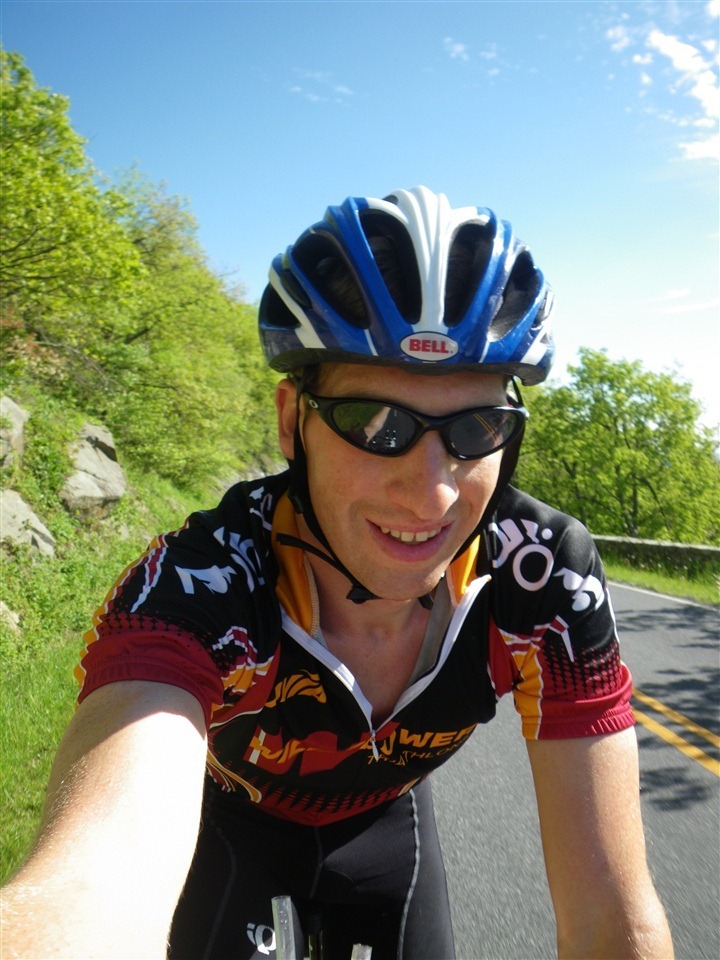 Eventually after a long while I found my turnaround point – just beyond the only tunnel on the drive through a mountainside.  So I quickly hopped off my bike and took a few pictures.  Unfortunately, my camera completely spazzed out and I lost a bunch of the ones I took, so I’ve only got this salvageable one from that area. 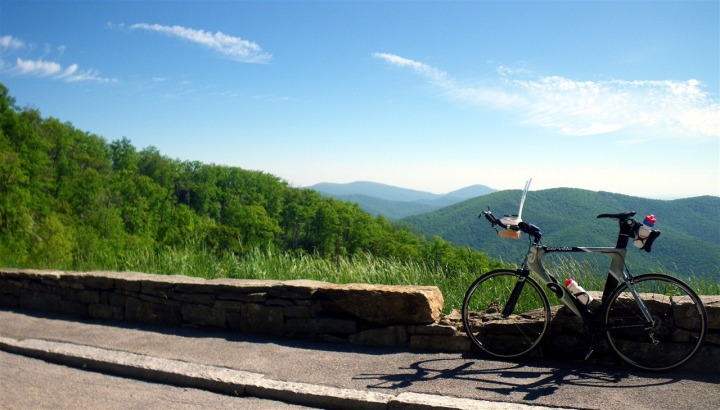 Then it was back through the tunnel again.  I really dislike the tunnel. Not so much the second time going back since it’s downhill – but the uphill section going out sucks because you’re slower than traffic and have to be super careful with no lights.  It’s only a hundred yards or so – but it feels like forever. 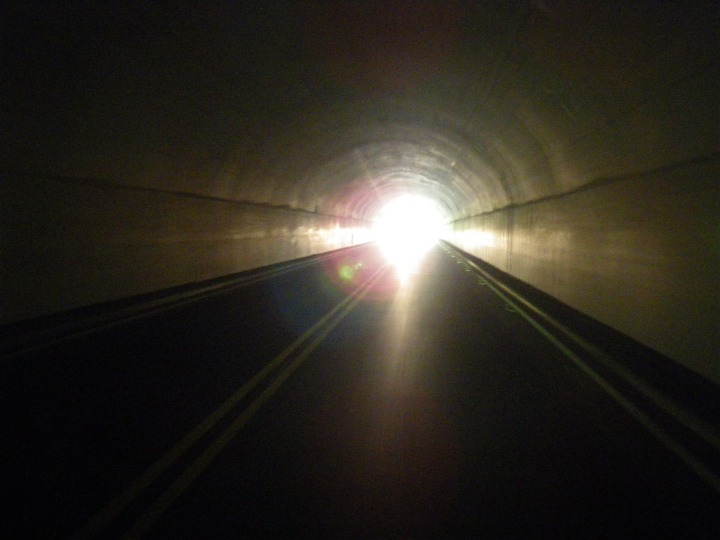 From there I cruised down a steep curvy descent section before kicking it along some of the rolling flats in the middle of the below picture.  Flats are all relative of course…

Eventually I came across another dear: 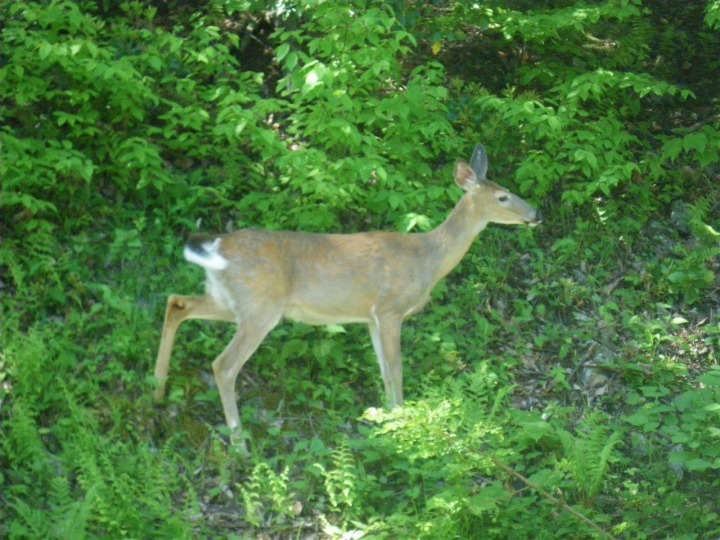 And then a short bit later…Yogi the Bear! 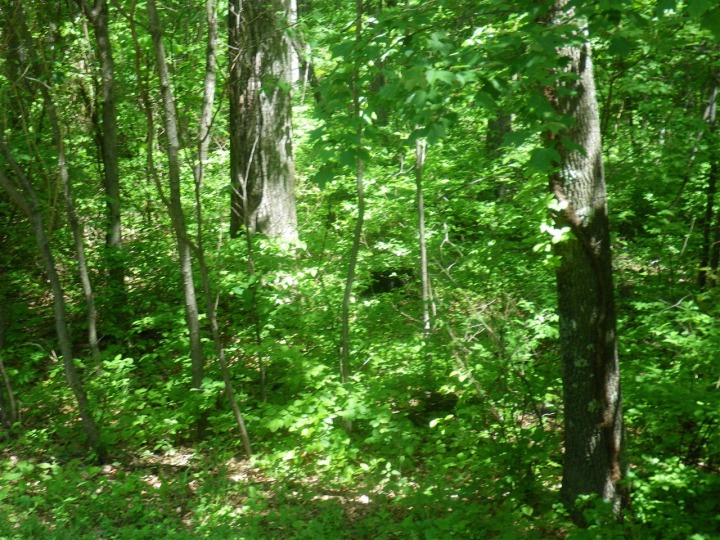 It’s the black splotch in the middle of the photo.  He started running away cause some dumb dude got out of his car and starting running after him to try and get his picture.  So my picture in turn sucked.  Personally, I wish the bear would have ran after him.  That would have made for a much better picture.  My total animal count for the day ended up at: 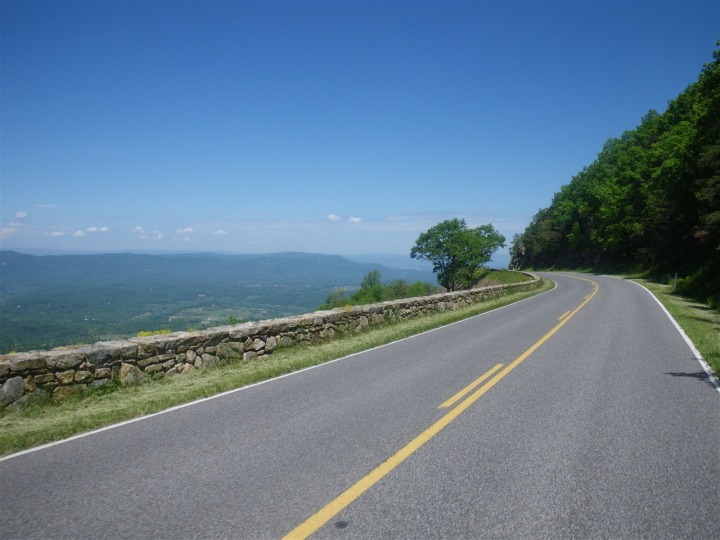 I get back to the car..but all is not done yet.  I have to actually go back down the hill to the entrance first…and then back up the 1,000 feet of elevation gain I just cruised down at 41MPH.  Hence the whacky drop/up at the end of the elevation chart above.

Time to run, brick style!  Which starting off making the brilliant mistake of thinking it would be ‘fun’ to run downhill a bit.  So I started off by running down the mountain without actually taking into account the fact that I’d have to run my ass back up again.  Note that this is an elevation drop off over 200 feet in only a third of a mile.

So, up I went back up the hill again (I didn’t really have a choice in the matter).  Upon finding the top of the hill I wandered around on some flatter forest service roads for a total 5Kish run in a touch over 20ish minutes.

Then finally, for the second time today – I found the car- woohoo!  This time I got to stop!  The girl was also hanging out there waiting for me, as she had a bit of a shorter ride. 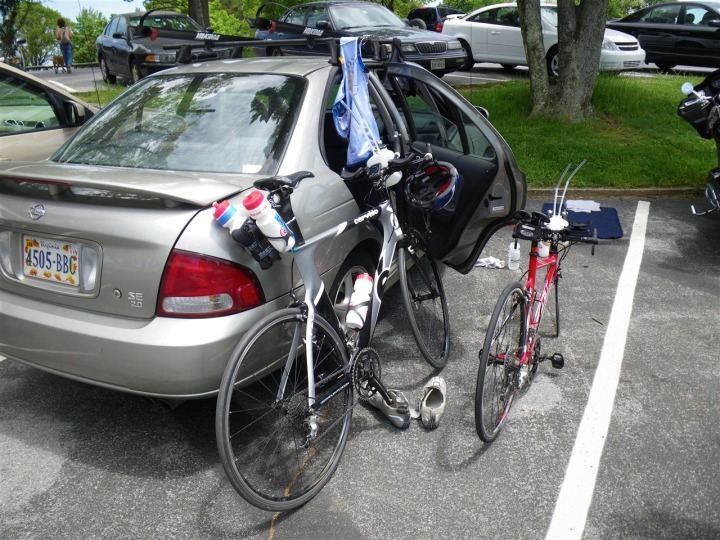 After cruising home at a reasonable hour it was time to get to work on food items.  We’ve got a BBQ tomorrow at my place with lots of goodness in the pipeline.  Starting with my pulled pork (I’ll post my recipe with the final pics later this weekend).

Here’s some of the prep work though.  Two full pork asses* – a total of 20 pounds of pork.  Sweet!

*The type of meat used in pulled pork is either the Boston Butt cut, or the Pork Shoulder.

In an attempt to give you scale, I put the normal size bananas off to the side. 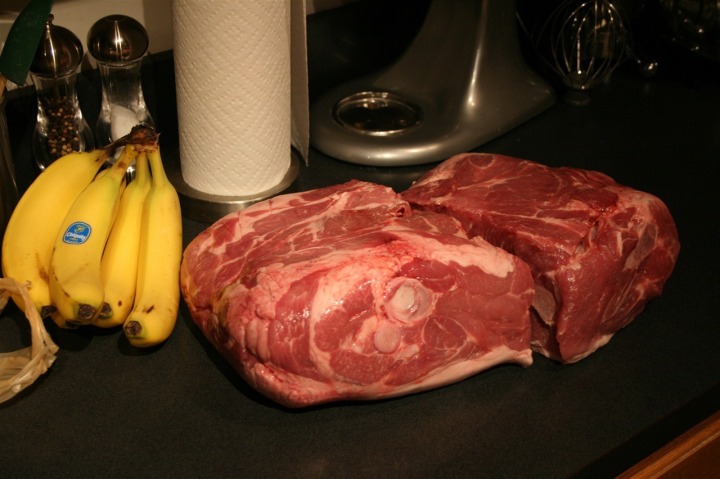 Then I applied some of Bad Byron’s Butt Rub, which will set overnight tonight. 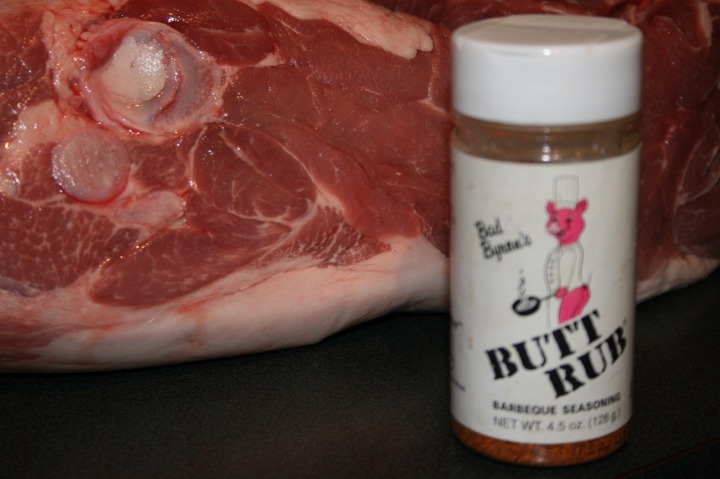 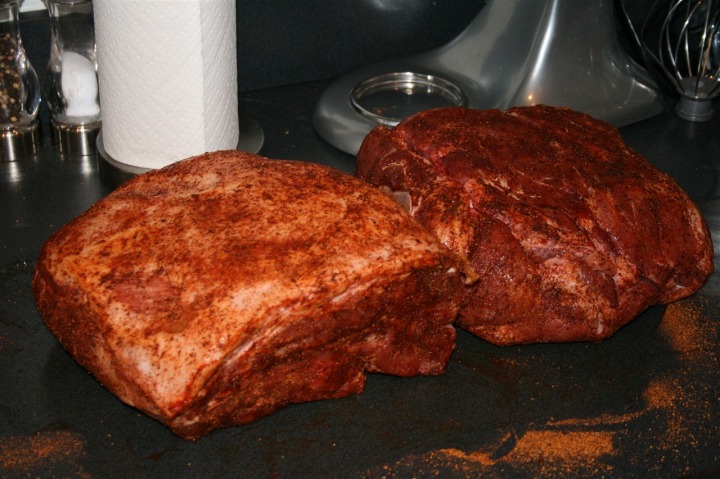 Meanwhile, the girl is busy making the most creative cupcake creation ever attempted in the house.  Here’s a sneak peak: 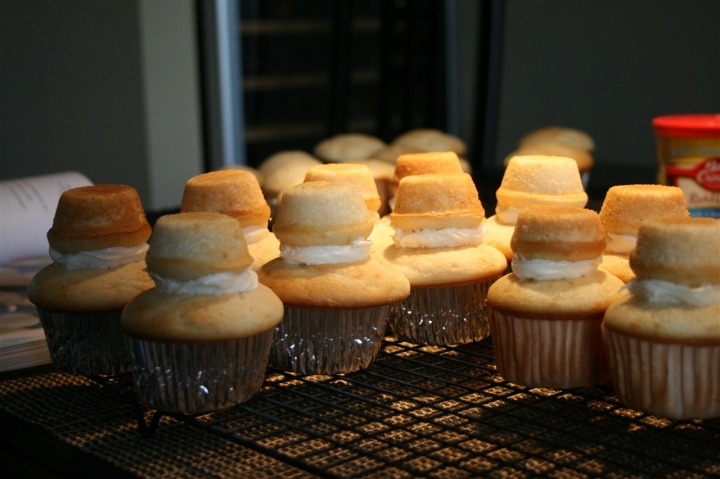 And after I finished up with the pork, I moved onto a dessert involving 1.5 pounds of fresh raspberries…and a hell of a lot of sugar. 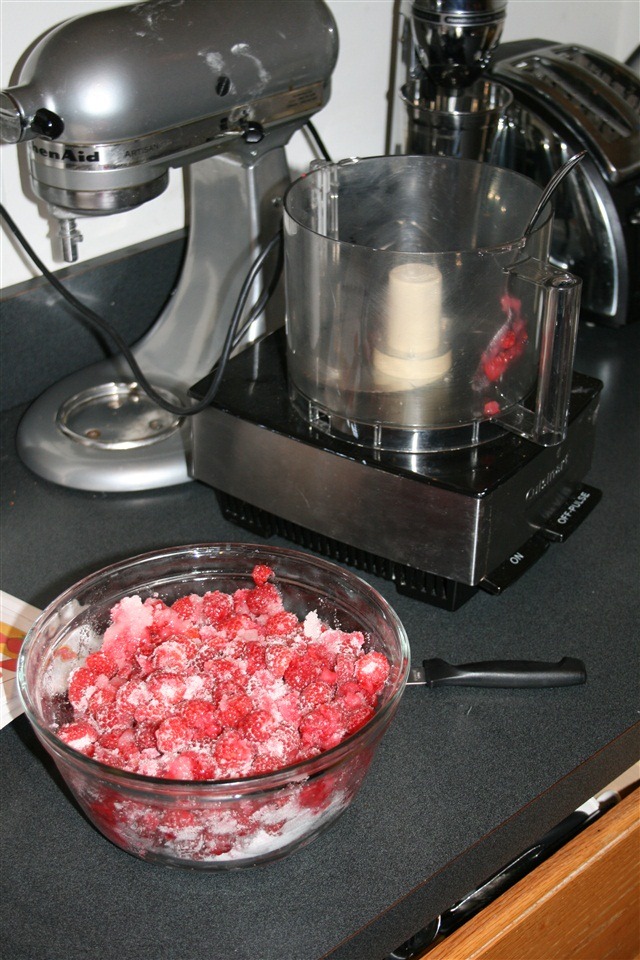 With that, I need to head to bed.  I’ve got a 2-mile open water swim ‘race’ tomorrow. But it’s just a training swim with no time/place goals, simply finish and get home.