Back in late December I was contacted to review a new sports watch that’s out – the Tech4O TrailLeader 2 Sports Watch. A couple days later it arrived on my doorstep – just in time for my various end of year trips, as well giving it an opportunity to test it out in various climates. 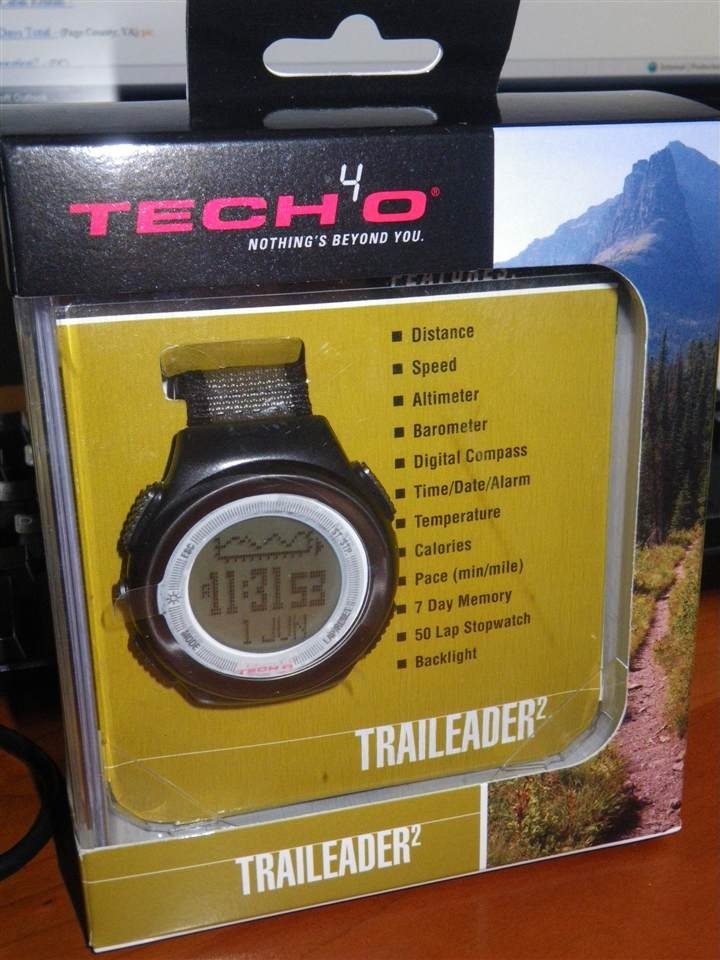 Unlike many of the GPS based watches out there today, this one is quite a bit more affordable (less than $100, with others in the series cheaper) and designed for a wide spectrum of uses. It also doesn’t require a computer. Though the watch is has a ton of features in it the major functionality pieces relevant to me are:

With that, I unpacked the little box and found the watch inside. It’s rather reasonable and fairly normal in in size in comparison to my 305 GPS watch. It could pass for a normal watch if people weren’t paying close attention. 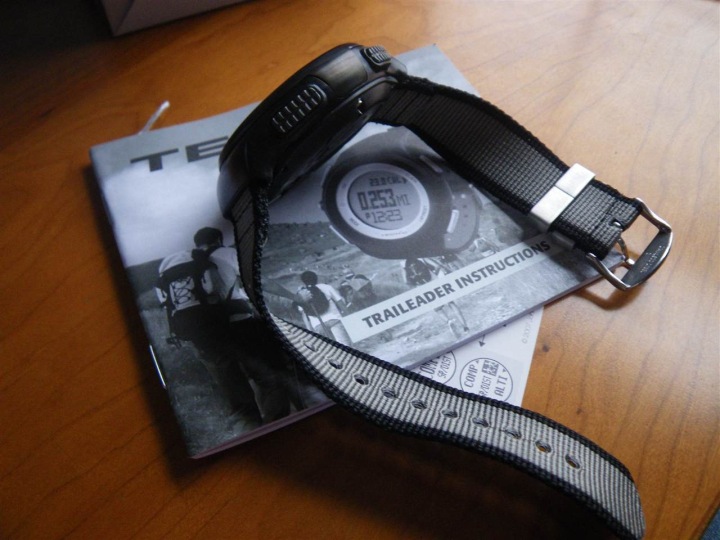 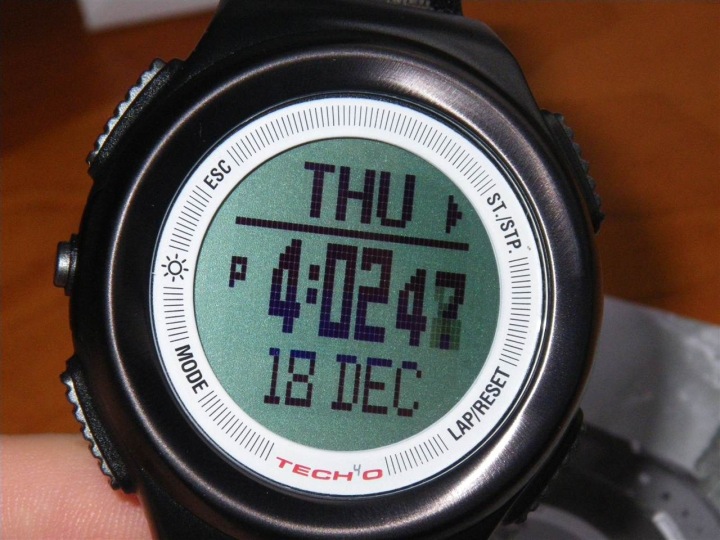 My first test for the watch would be to take it to Whistler for a weekend of skiing and running. While skiing it did quite well in showing my current altitude. In theory it can track total elevation gain for the day – but in practice I forgot to bring the manual with me onto the chairlift to remember how to do it. Anyway, I eventually figured it out – see below for the example of how it looks. 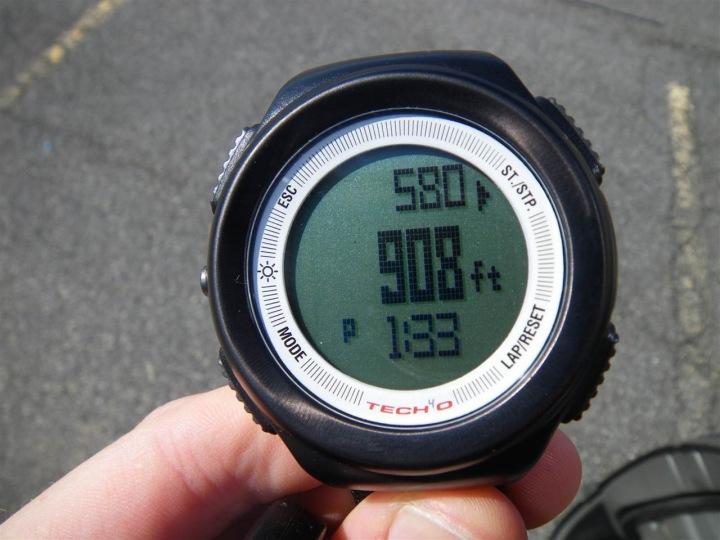 Next up was a running test that evening. I put the watch on side by side with my Garmin watch and went off for a nice run (in the ice and snow with my Yaktrax). 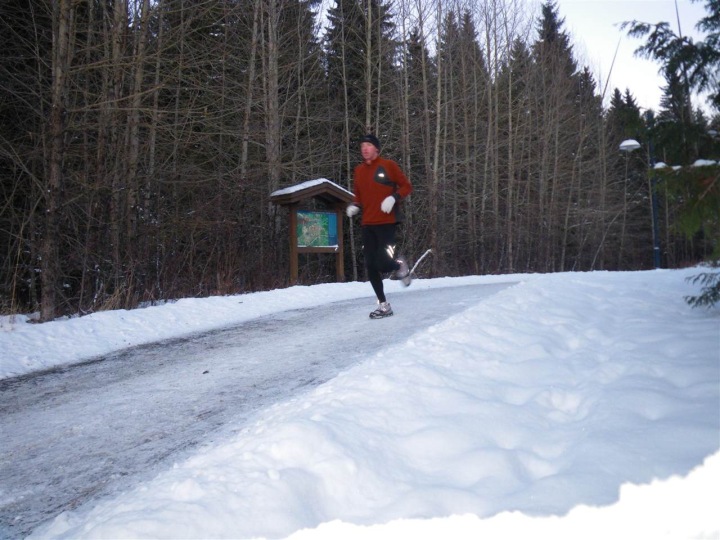 I was fairly impressed with how exact it was compared to the Garmin while outside. They were within 1/100ths of a mile the whole time – regardless of if I sped up or slowed down pace, nor the fact that I was running in Yaktax. Conventional footpod based systems would likely have been all dorked up due to the new stride – but since this uses an internal accelerometer it seems to do a much better job at tracking my pace that foot pod only systems (non-GPS). 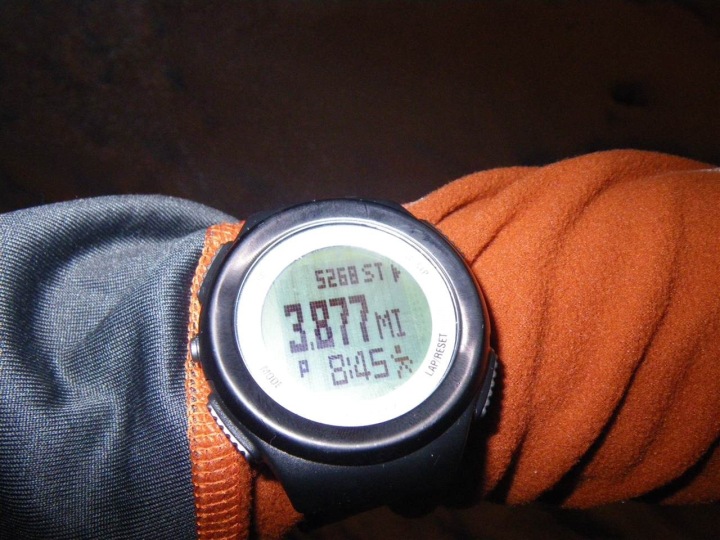 The only problemo though was that it was less than 10*F outside. Which meant that the watch was a little unhappy and kinda slow. Sorta like being in slow motion. Of course, I rarely run in weather this cold – so I don’t see it as a major blocker.

Oh – how did I know it was 10*F out? Well, the watch told me! Most watches don’t do that! You can see the temp in the above photo, except, it was switching displays when I took the photo, so it kinda blended together. 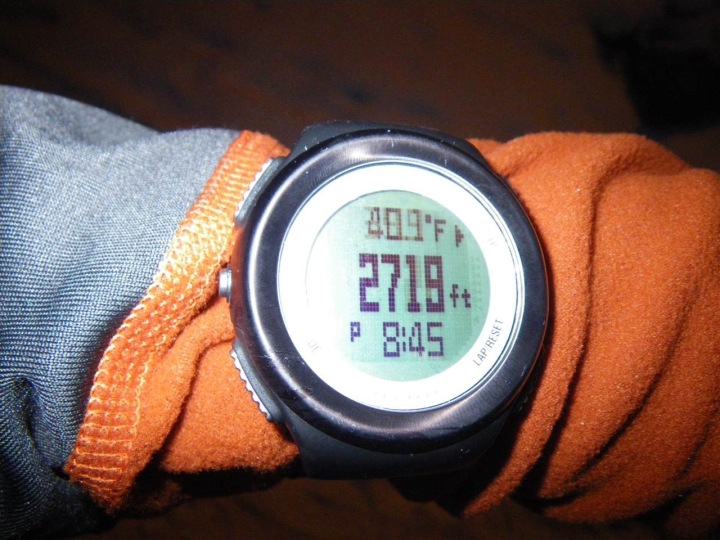 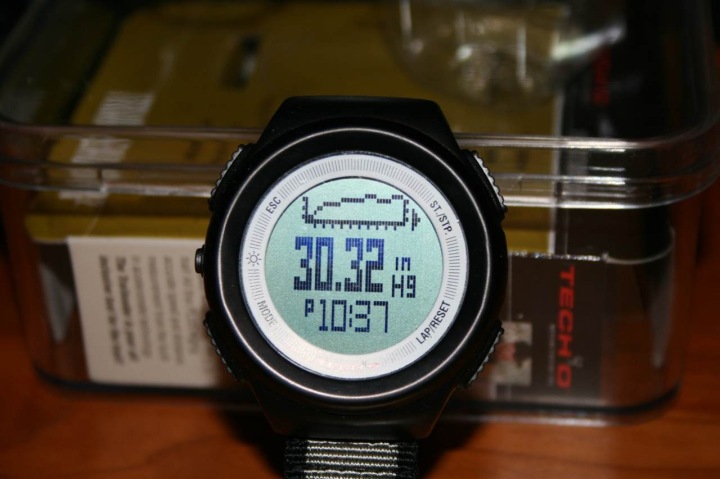 On regular non-cold runs I’ve found it also works really well – always keeping pace with my GPS watch. And the buttons are pretty easy to press – such as start/stop. However, I have found the menu system does take a bit of getting used to – like all watches I suppose.

I did give it a short on the treadmill last night, and it actually works! Which, upon further reflection is logical. Given it is measuring inertia with your arm, it wouldn’t really matter if your inside or out. I found it accurate within 4/100th’s of a mile.

Lastly, size-wise it’s a bit smaller than some GPS based watches I have lying around. Of course, this is logical given it has a much smaller feature set than some GPS watches. For example – you can’t download it to your computer, nor do you have any charging functionality (although, not having to charge is kinda nice).

For size comparison here’s a lineup: 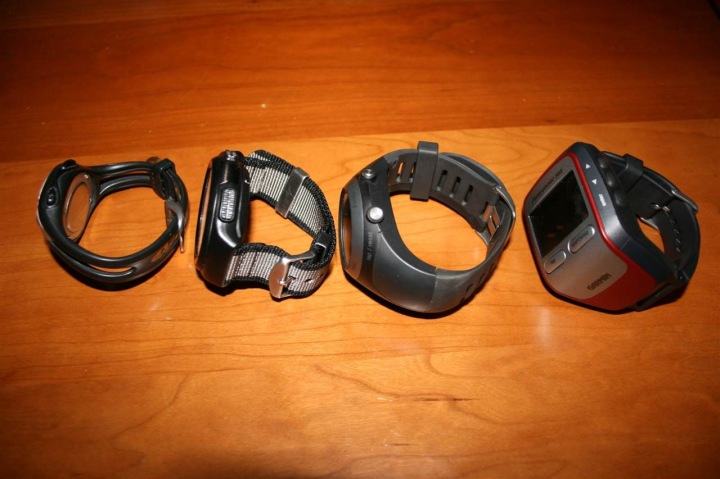 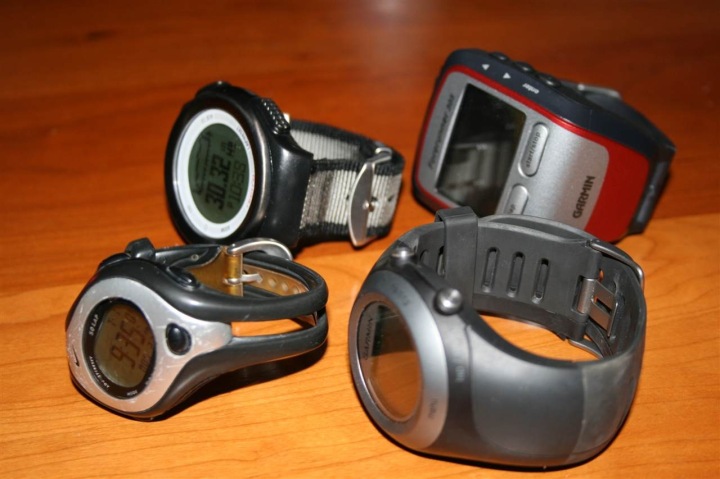 Overall, I think it’s a great watch for hiking or other outdoor activities, or for a new runner or walker not interested in GPS. They have a full lineup of similar watches with different functionality, so you can find something that fits you best. Here’s a quick list of Pro’s and Con’s:

Hope this helps folks out there looking at the two. As always, if you have any questions – feel free to ping me via either the comments here or e-mail on the sidebar and I’ll try and respond within about 24 hours.