After doing IM70.3 Rhode Island I drove down to Connecticut to hang out with family there for a few days. Last Tuesday while still up in CT I went blueberry picking with my family. The weather was perfect for it, and the blueberry bushes were packed! 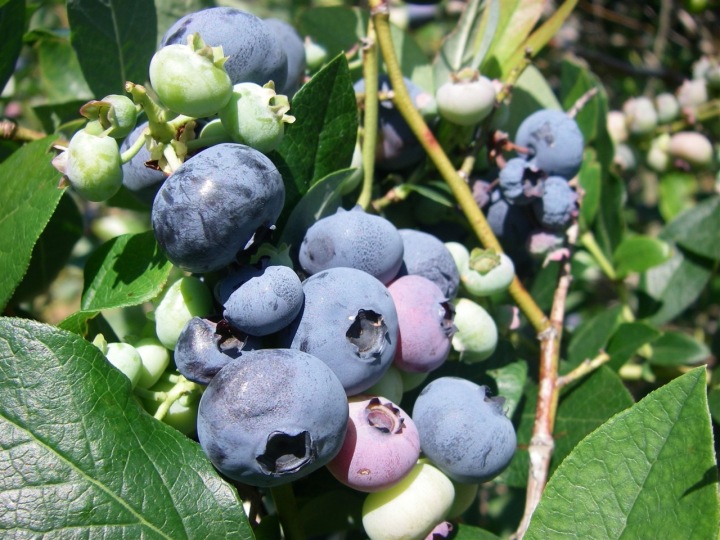 My mom and I raked in 11.5 pounds of blueberries in about an hour. Meanwhile my aunt (Mom’s sister) and her daughter took home 12 pounds. 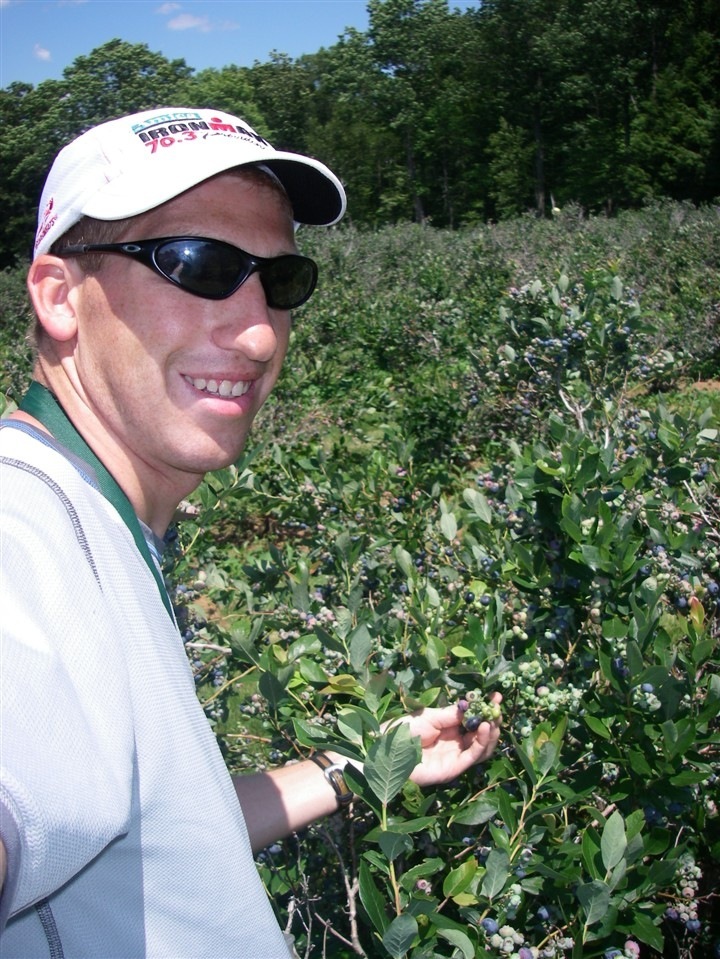 Since my Mom was staying with them for another week or so, I got to take the 11.5 pounds back to DC with me. 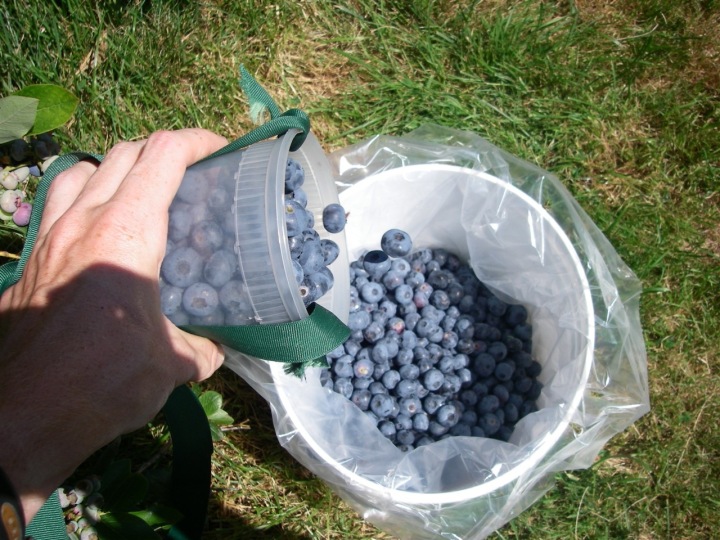 Thankfully TSA didn’t see the blueberries as a potential national security threat, so I was able to take them onboard. The only little problemo was that by time I got out off the plane at BWI my blueberry bag was dripping a wee bit with those berries crushed on the bottom (we’re talking a Nordstrom sized bag filled with blueberries here, serious poundage). So there’s a little blueberry juice trail from gate A14 to parking spot 5B-30. Just in case your wondering…my bad. 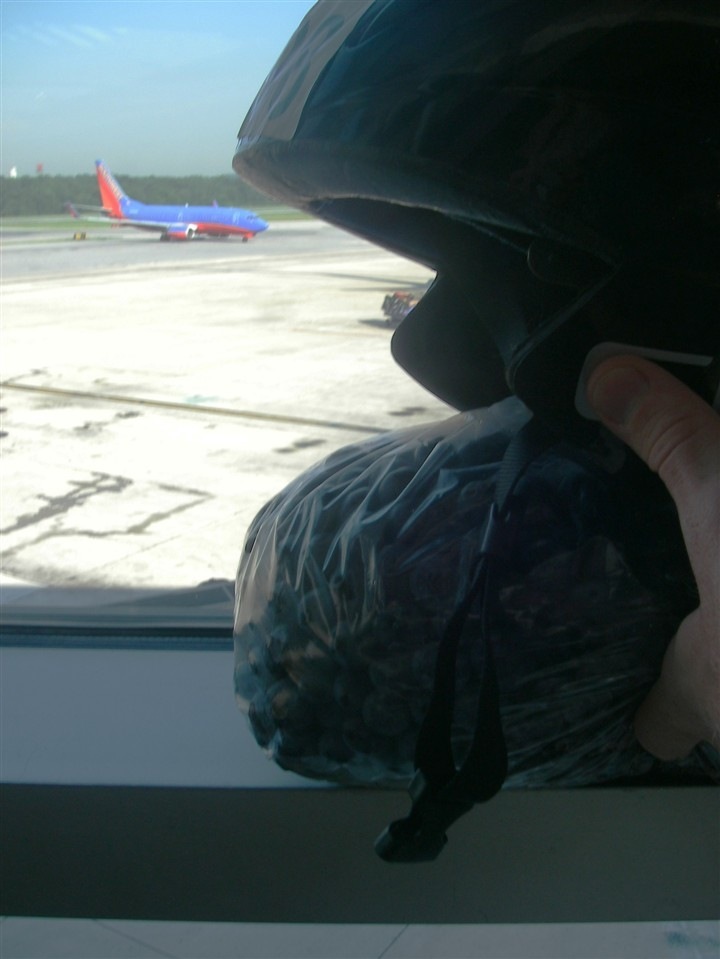 (The bag that had the blueberries also had my aero-helmet on top of the berries. I tried to take a photo of the berries with the helmet on top, but it didn’t quite come out right. The bag is much bigger than the helmet out of frame. Also, there’s some juice on the window sill now as well. Sorry.)

Given I had so many blueberries, I set out to make at least one blueberry thing each day. Sometimes I did three or four things. But always at least one. Here’s my list of creations. 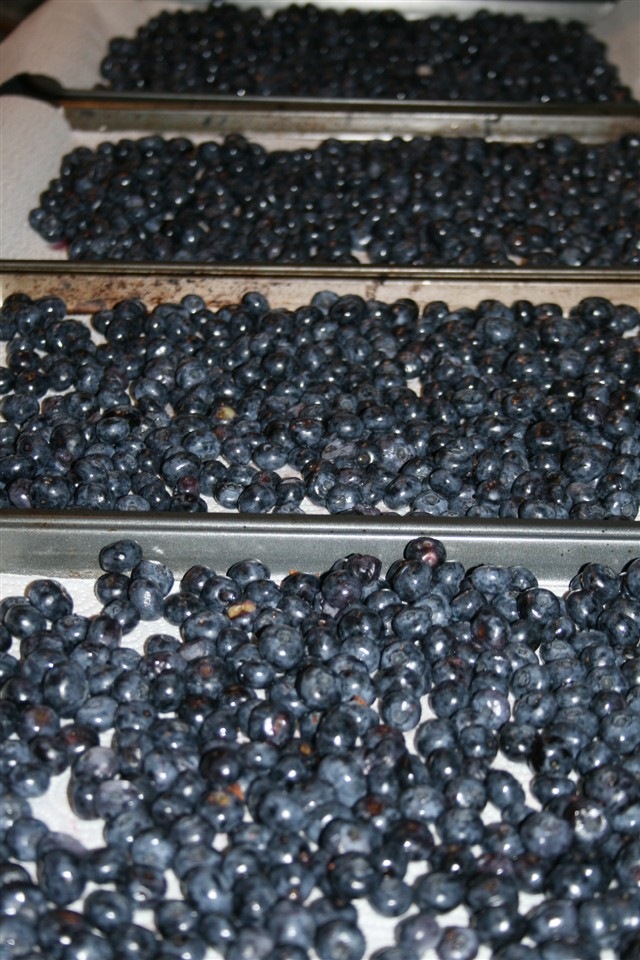 After some serious blueberry sorting, it was time to make my first dish. I couldn’t decide what I wanted for dinner (yes, dinner), so I just did breakfast for dinner. And made blueberry pancakes with a Blueberry Compote on top. I ended up actually using the compote for a number of different dishes, so it worked out pretty well. 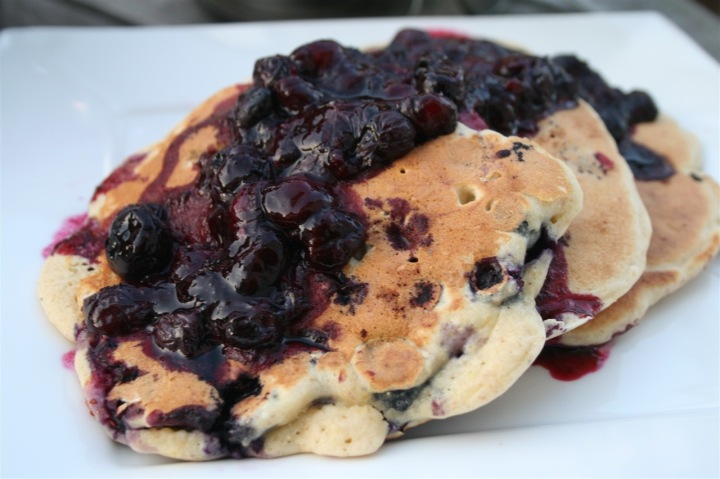 Thursday I was lazy again, so just did a quick smoothie. I dug into three different smoothie books that I have, and only one had a blueberry smoothie recipe, and it sucked. So I just made my own. I used an apple juice base (most berry smoothies do), added some leftover Strawberry Sorbet from a few weeks back, and then tossed in some blueberries. Work complete! 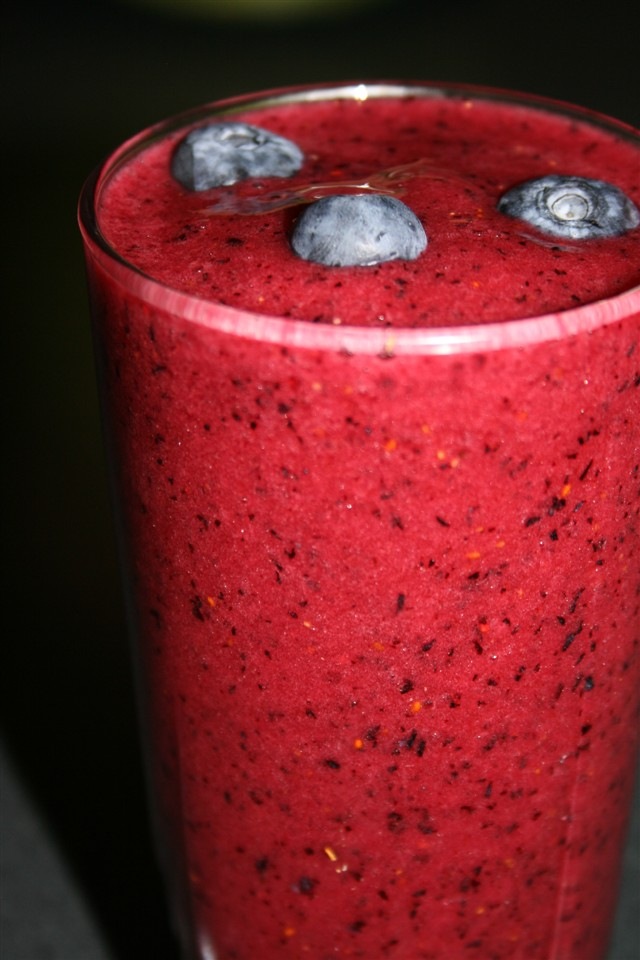 I love blueberry muffins. I went for a different recipe than my usual recipe to try it out. It was alright, they kinda came out flatter than I wanted. I think it was because my baking powder may have been a bit well aged. I picked up some new stuff over the weekend to replace it. 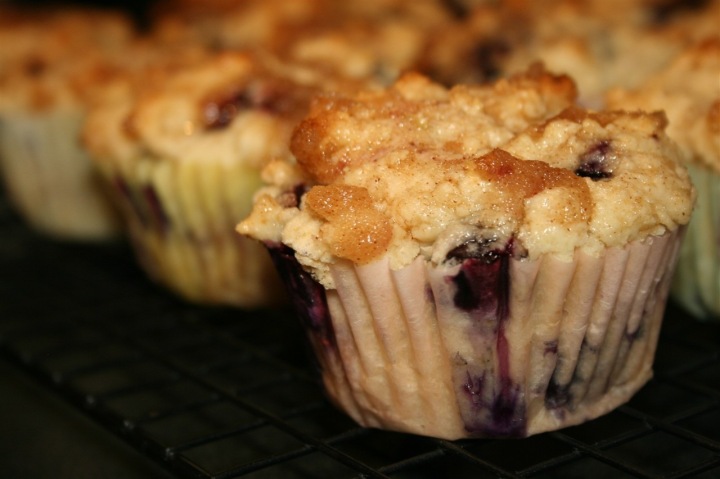 Now technically, these were on Friday because they came out of the oven at 12:05AM.

Given the pool didn’t open till noon, I spent the morning making all assortment of food. Breakfast was first up. I’d been dying to make these little bacon cups for months now. I used a Black Forest bacon, so it’s not quite a red as most bacon – but way more flavorful. I then put scrambled eggs in them and topped it with fresh chives from my little deck garden. I made Belgian Waffles and then added some of that Blueberry Compote and sauce to it. It’s hard to tell from my photo, but it is indeed a little basket of bacon. 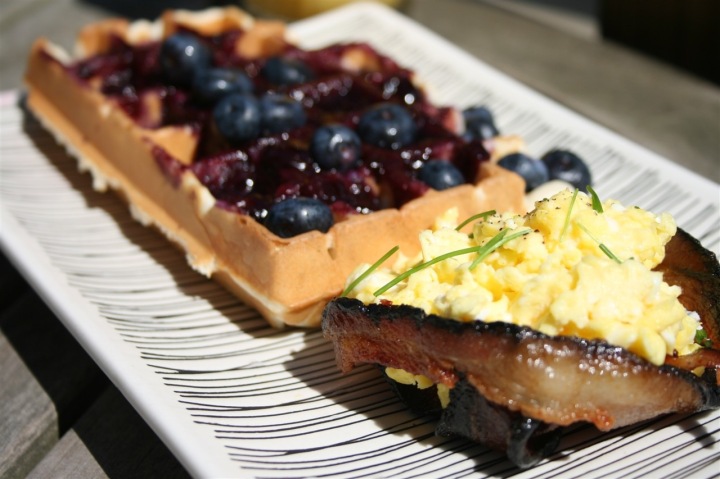 While my waffles were waffling, I put together a sweet cream base for the Ice Cream, and then also mixed up some berries, sugar and lemon to both add color…and of course the required blueberries. Twenty minutes in the ice cream machine later and it was done. 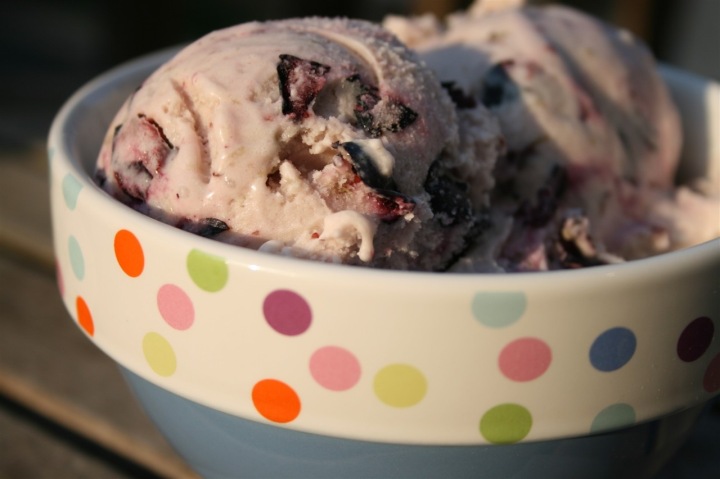 Finally, after my long swim and short run it was time for dinner. On Friday night I had dinner with some friends, and two of the them suggested that I do blueberries over pork chops. So…I did. I tossed the chops in bread crumbs with a hint of parmesan, and then into the oven they went. By time they got out I had put together a Blueberry/Strawberry/Pecan salad with a Balsamic dressing, and then added some fresh white corn to the mix. Add the blueberry topping and I was good to go. 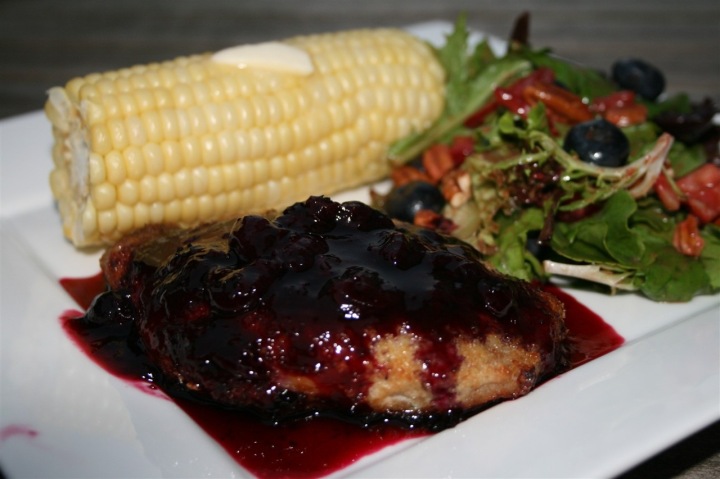 (It was dark out by time I got it on the table, so you’ll have to excuse the less than ideal photo, and the blueberry sauce kinda went everywhere. But it tasted so darn good – I was actually fairly surprised, sometimes pork is tricky.)

After Sunday’s long ride, I got home really late (like…it was dark out late), and just didn’t have any energy to cook anything. Never been so exhausted. So… I just had a small plate of berries. Here’s the re-enactment photo: 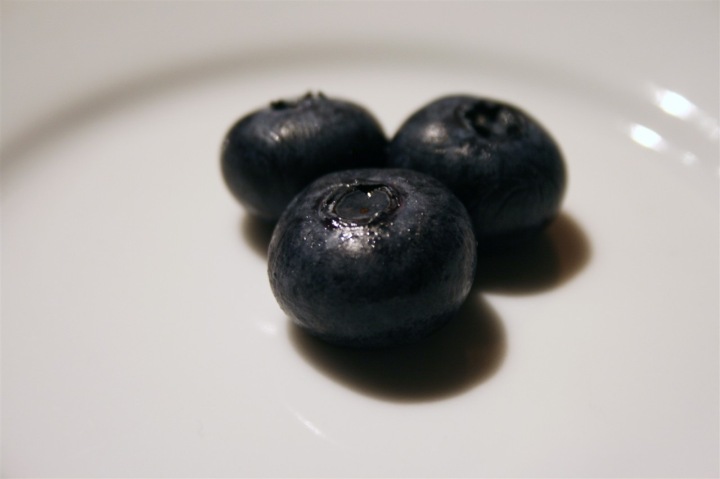 Monday got me back in the blueberry consumption business. I made SERIOUS headway into the stash, even dipping into the already frozen on Wednesday freezer reserves. I ended up doing three different recipes at once. But first into the oven was a rehash of the blueberry muffins. I wasn’t happy with the first batch, the didn’t pop up. They went all flat. Some investigation revealed well aged baking powder was the culprit for the topless muffins. So…round two. Still not what I wanted, but at least I had the muffin top this time around. (To be clear however, in most life situations, topless is better). 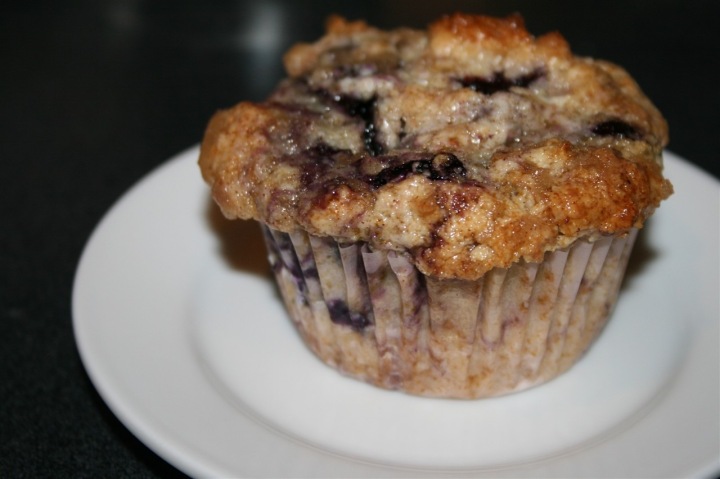 After that, I quickly tossed together a blueberry pie. Seriously – I think this took the least amount of time compared to all the other dishes I made. In case you don’t believe me that making the top is simple – here are some instructions for doing the lattice top (really, it’s very easy). 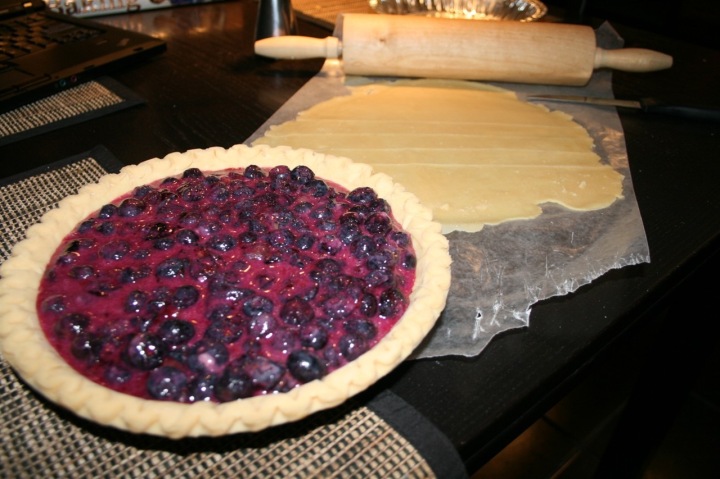 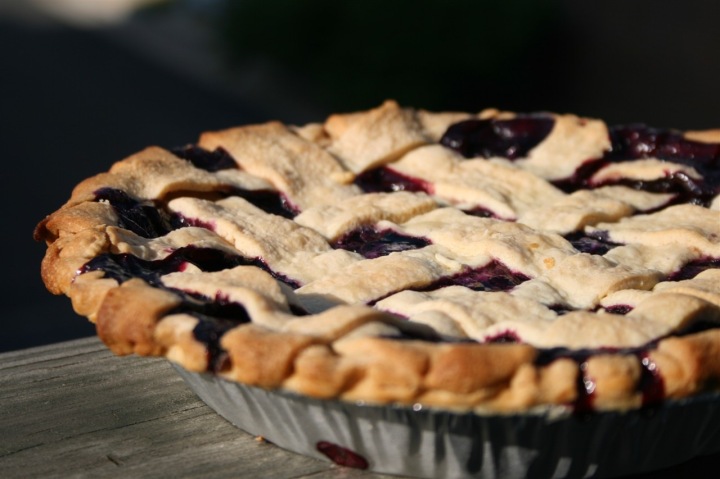 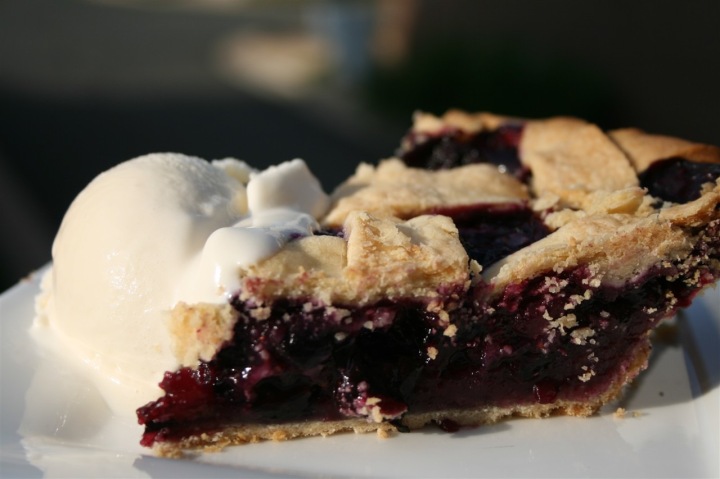 (For the first time in my life – a slice of pie actually came out of the rest of the pie perfectly!) 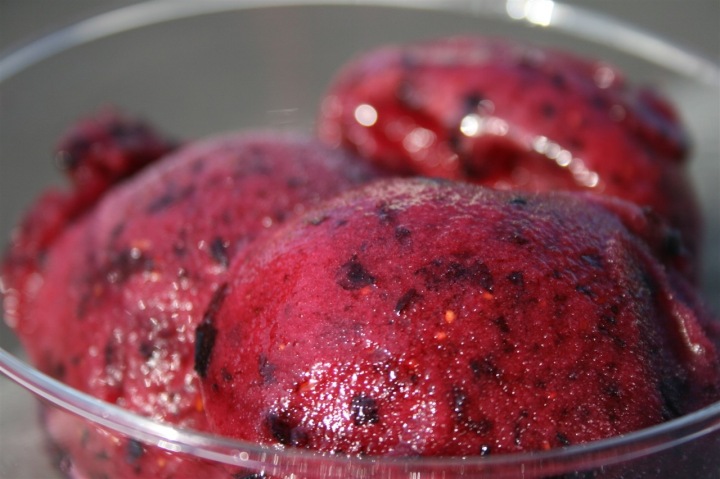 I was REALLY happy with out the sorbet came out. My previous favorite was the Raspberry, but this…this might just take the crown!

I had wanted to toss in another savory dish (such as a duck with blueberry sauce), but – decided instead for something that will please everyone: Blueberry Lemonade.

Yes…I wasn’t sure how it would turn out either. But I figured why not, give it a shot. In the end – quite good. Kinda like strawberry lemonade, but with blueberries. Plus, the blueberries were just lightly crushed/chopped – so they let out the flavor while still remaining a little treats as you drink. 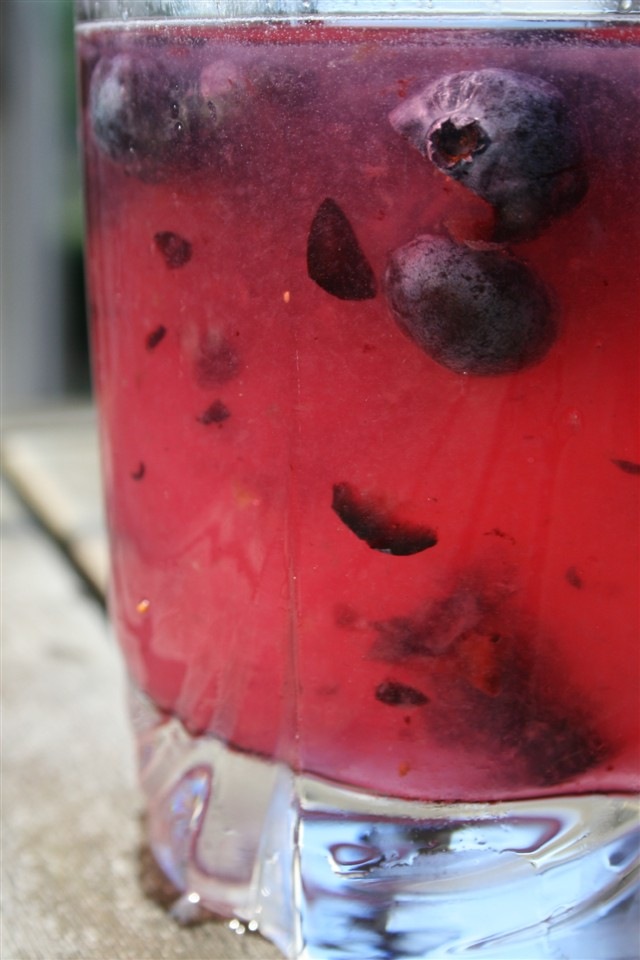 So there ya have it. A week’s worth of blueberries. Oh, and here’s the thing – I still have two liters of blueberries left over. All perfectly individually frozen like little marbles (did it on cookie sheets). Ready to go for smoothies all summer long.

Btw, I had stolen this little table placard from Whole Foods many months ago. But it’s particularly suitable for this past week. 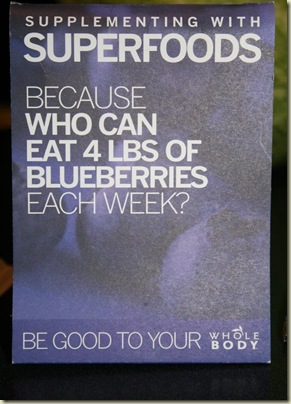